With a whopping line-up of over 1000 stalls, this year’s Geylang Serai Ramadhan Bazaar from 26 May to 25 June is primed to be the most happening one yet. For the uninitiated, think of it as a pasar malam on steroids – there’s a coma-inducing amount of food to try and bracing the large crowds can feel like an episode of Ninja Warrior.

But it’s worth the trip ‘cause you’ll never know what novel F&B concoction you might just stumble upon amidst the maze of Ramly Burger and Thai milk tea stalls. We headed down to Geylang in search of this year’s latest food craze – here’s some of what you can expect: 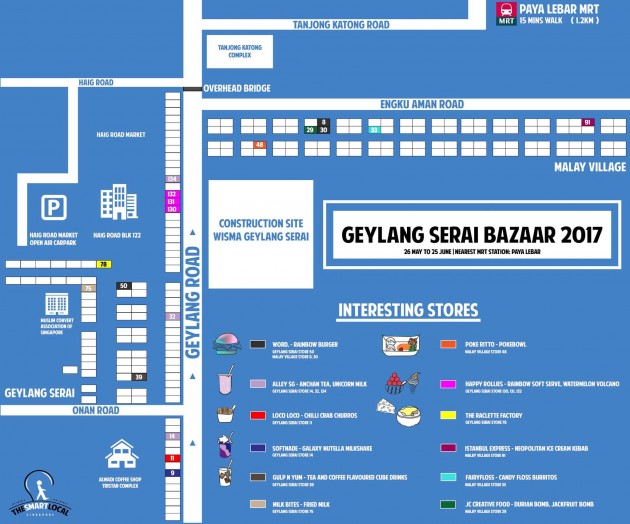 We’ve all seen those raclette cheese videos on social media – the slo-mo flowing of cheese from a single slab onto a plate. Trust us when we say it tastes as good as it looks. Air-flown from France, the cheese – layered upon baby potatoes and mini-hotdogs – is super rich and creamy, so share this with a friend to avoid that jelak feeling. 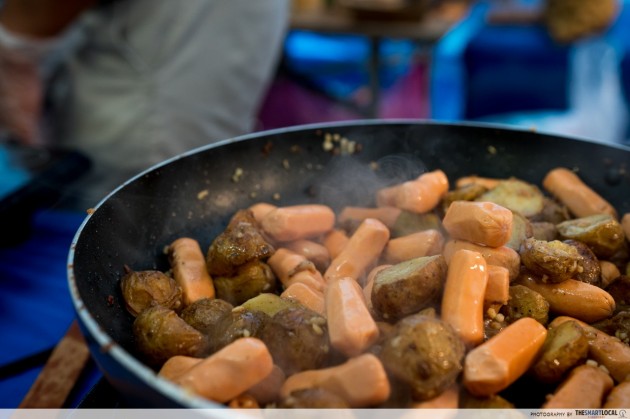 Price: $12 (Raclette set) | $40 (Family platter)
Where: The Raclette Factory, Stall 78 (Right next to the Muslim Converts’ Association of Singapore) 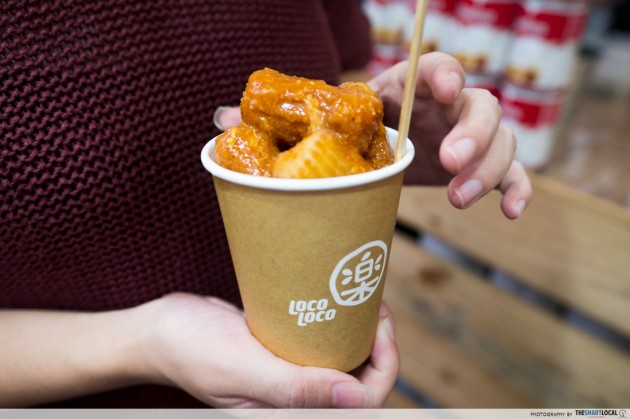 If you thought churros have gotten passé, think again! There’s a new flavour of churros in town, and it’s uniquely Singaporean. Chocolate sauce and cinnamon sugar are safe bets, but in 2k17, we dip our churros in savoury chilli crab sauce, because we can. Surprisingly, the spiciness works! 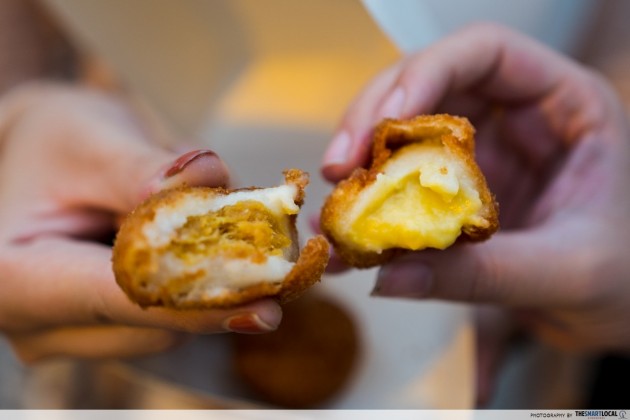 First there was goreng pisang, and then came fried Oreos. Now, the same magic is applied on Singapore’s favourite fruit – durians. These fried treats taste similar to mochi, sans the crunchy outer layer. If you’re not a fan of the spiky fruit, there are also jackfruit bombs. EIther way, both varieties are equally addictive. 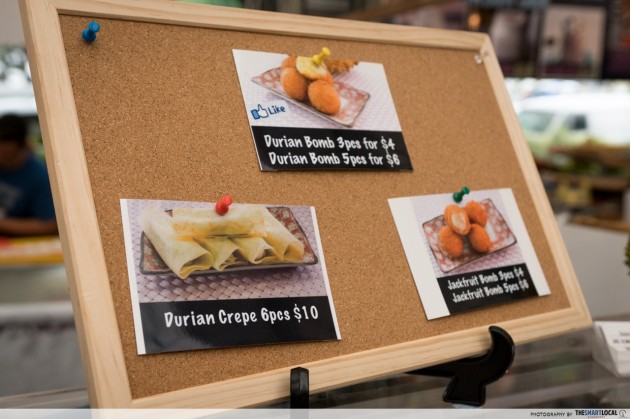 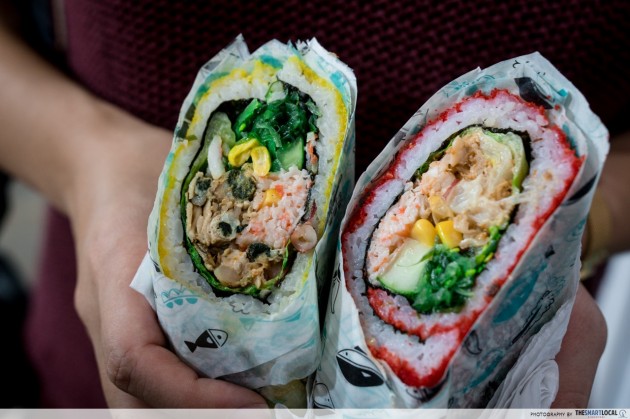 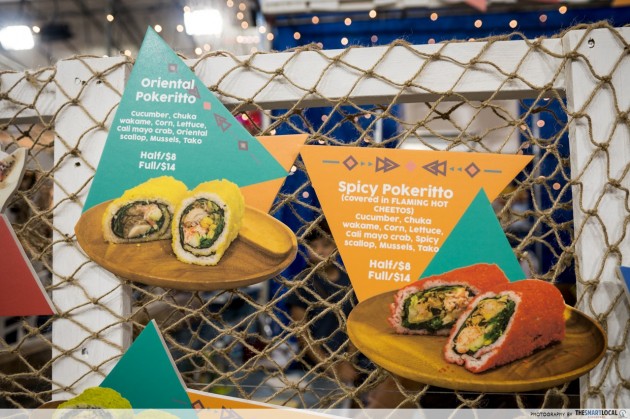 Swirl for Sweet Dreams is a drink that requires you give it a quick swirl to see its shimmery liquid in glorious motion. It looks like a psychedelic mini-typhoon within a bottle – a fancy way to quench your thirst. Plus, it tastes super refreshing – ours was a mix of apple juice, lychee and pandan.

Price: $6
Where: The Dream Factory, Stall 78 (Right next to the Muslim Converts’ Association of Singapore) 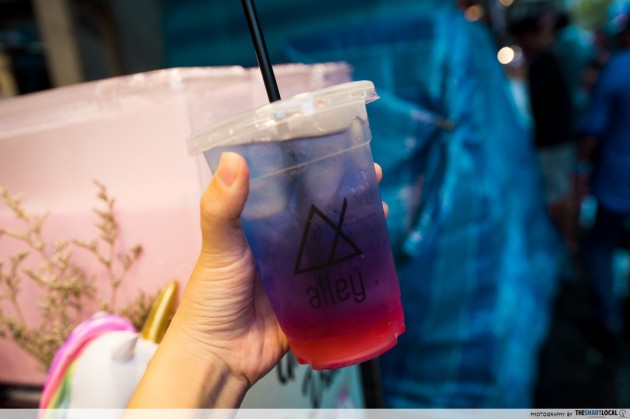 Another option is this unique multi-layered anchan tea, a Thai drink that’s a considerable alternative to the all-too-common Thai milk tea. Giving you serious chemistry labwork throwback, the seemingly immiscible layers will form an entirely new drink with a simple swirl of the straw. 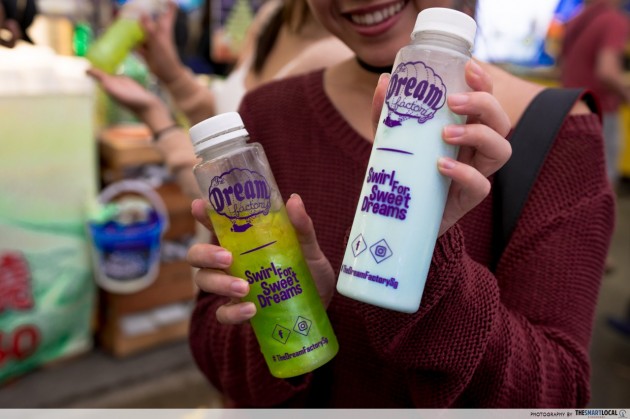 Exactly as its name suggests, this drink is simply a different hued version of the classic bandung drink. Made from premium rose syrup, you can expect the familiar milky rose flavour, but one that’s neither too diluted or concentrated. It’s worth a sip – or a snap – even if it looks very much like bottled lotion.

Price: $6
Where: The Dream Factory, Stall 78 (Right next to the Muslim Converts’ Association of Singapore) 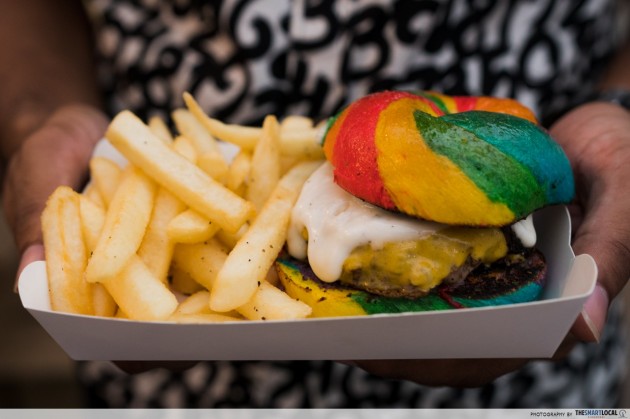 Combine an improved version of last year’s rainbow bagel with the classic Ramly burger, and you’ll get this rainbow beef burger that’s sure to add some colour to your IG feed. It may seem too pretty to devour, but dig into its juicy patty anyway – it’s a step up from its underwhelming predecessor.

Price: $8 (With fries)
Where: Word., Stall 50 (Next to the Wima Geylang Serai construction site) 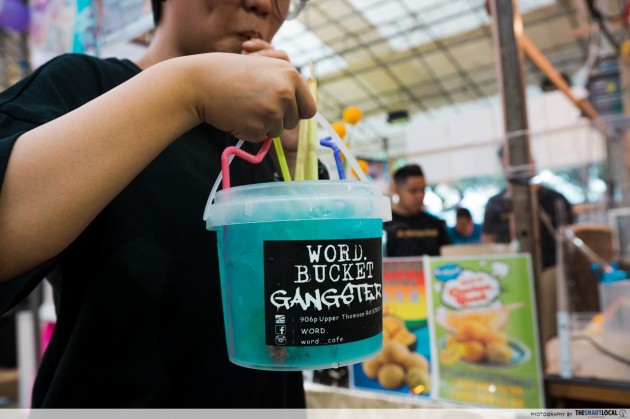 This is one badass soda drink, with concoctions named “Minah” and “Ah Beng”. We tried the “Mat Rep”, a pleasant mix of lemongrass, sour plum and lemon. One thing that we didn’t expect – the drink was served in a huge bucket, sure to keep you hydrated throughout your bazaar jaunt.

Price: $7+
Where: Word., Stall 50 (Next to the Wisma Geylang Serai construction site) 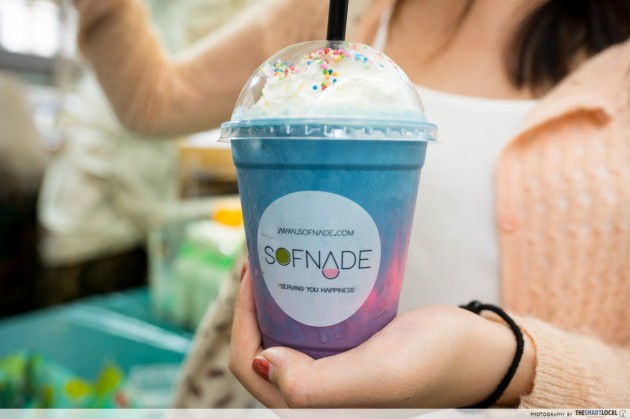 This milkshake may look like it’s out of this world, but it actually just tastes like good ol’ vanilla. Its blue-pink-purple swirls give serious Tumblr-aesthetics, and even serious brainfreeze if you gulp it too fast. 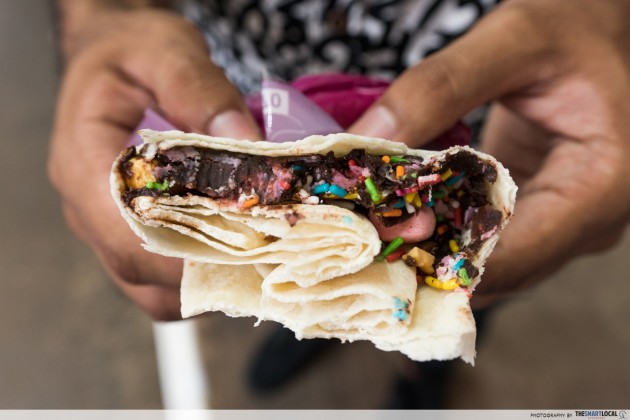 Kebabs are a common sight at the bazaar but only one stall serves chocolate kebabs – touted as the first of its kind in Singapore. The kebab itself is nothing too mindblowing – it’s made up of a neapolitan mix of chocolate flavours wrapped in a generous amount of tortilla wrap. Keen on the classic kebab? They have that too. And if you’re lucky, they might even let you prepare your own! 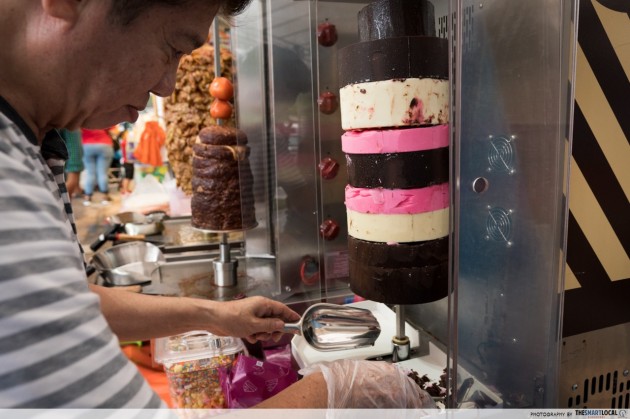 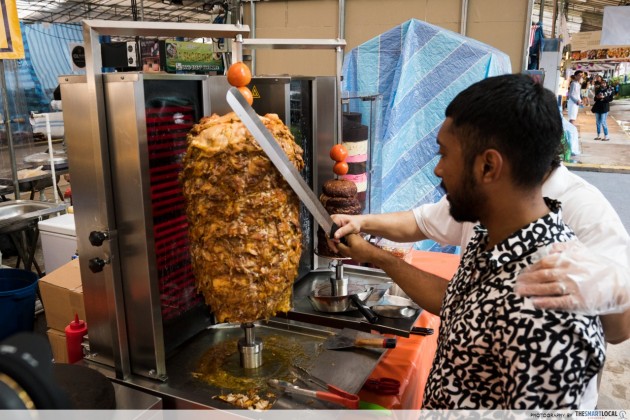 Price: $5
Where: Istanbul Express, Stall 91 (Next to the Wisma Geylang Serai construction site) 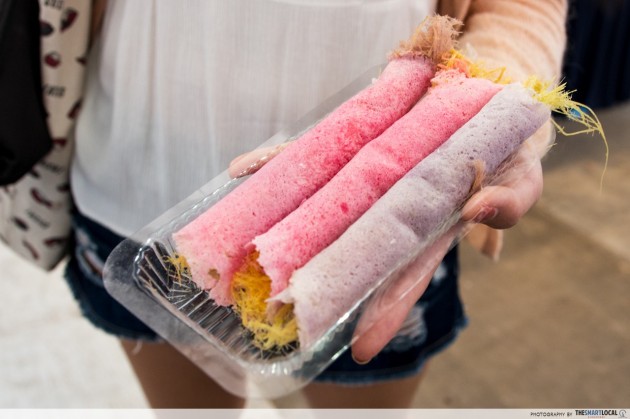 Here’s an unlikely sweet-savoury combo: candy floss + burritos. If you didn’t manage to get your hands on one of these at Artbox since they were only available via pre-order, fret not – because you can get them here too!

Price: $8 (3 rolls)
Where: Fairyfloss, Stall 33 (Next to the Wisma Geylang Serai construction site) 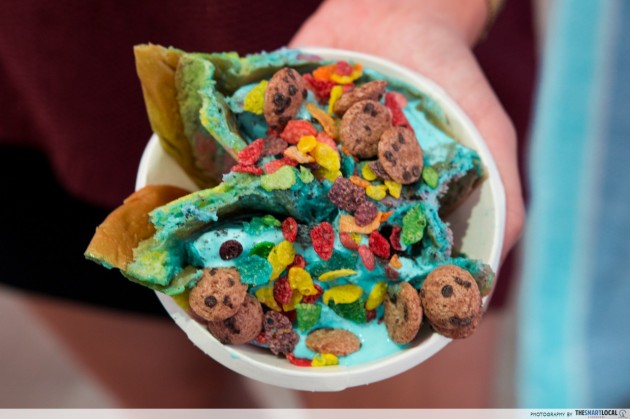 Have an entire planet in your hands – one full of ice cream, that is. The “planet” part refers to the shape of the ice cream bun. Imagine Jupiter, together with its rings, cut in half and its centre oozing with ice cream – that’s certainly one novel way of having normal ice cream.

Price: $8
Where: Fairyfloss, Stall 33 (Next to the Wisma Geylang Serai construction site)

Check these out too

These weren’t yet available during our first day visit, but we’re including them on the list anyway because they seem like they’re worth a shot! 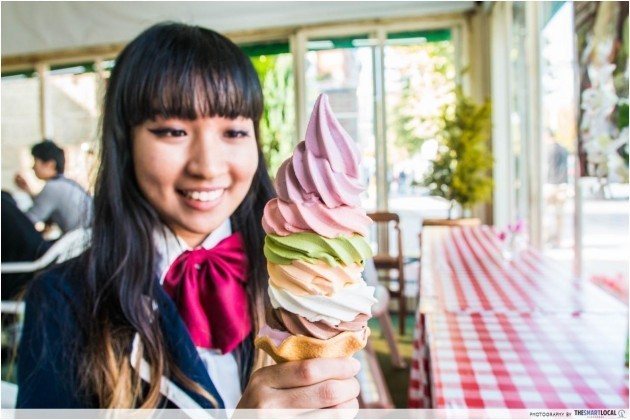 If you’re super indecisive – or like trying a little bit of everything – this rainbow soft serve is for you. You’ll get a slew of different flavours, all in one glorious tower of soft serve, very much similar to the famous Rainbow Tower soft serve found at Otaru, Japan. 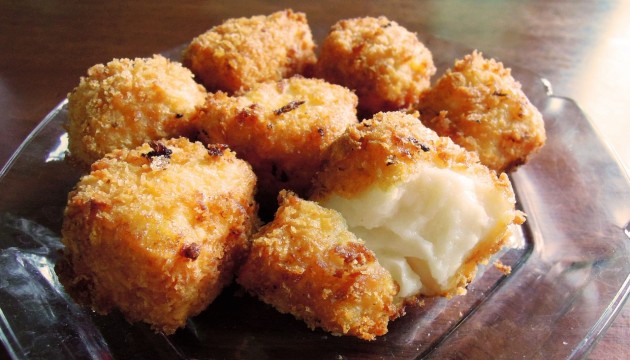 You read that right – milk that’s fried. While it may sound like a hipster gimmick, it’s actually not – with variations of this available in Spain, India and Taiwan. With a crunchy outer layer and rich, creamy center, these come in flavours of pandan, Thai milk tea and salted caramel.

Where: Milk Bites (Right next to the Muslim Converts’ Association of Singapore)

Geylang Serai Ramadhan Bazaar 2017 – the mother of all pasar malams 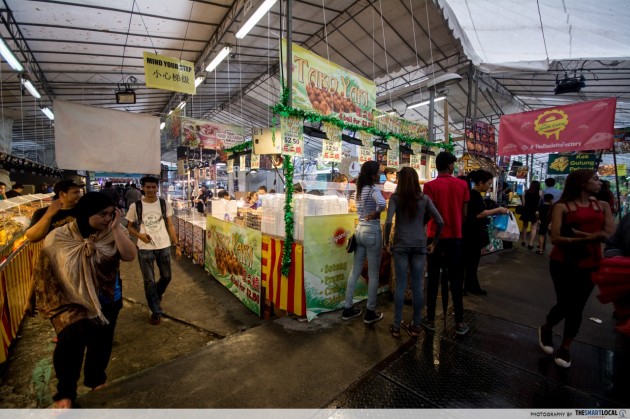 For peak experience, you’ll want to head down to Geylang Serai Ramadhan Bazaar from 7pm onwards when most stalls will have opened. No doubt, you can expect plenty of people and crazy humidity, but there’s nothing quite like the bustling atmosphere of a Ramadhan bazaar.

This is one epic affair, so take your time hunting down these snacks in the labyrinth of stalls – make multiple visits if necessary! There are plenty of other things available, from affordable clothing, home essentials, and an extravagant light display surpassing that of previous years’. 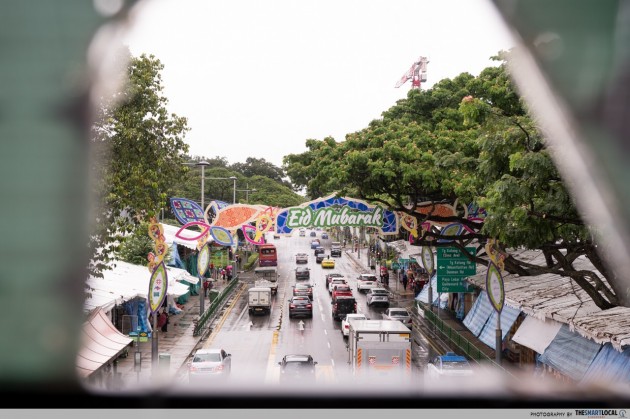 Pro tip: For those on a budget, make your way there during the last week – especially the final two nights – most of the stalls will be looking to clear their stock and you can expect to find items at half price or less!