“Green sus”. Those two words can make your heart thump uncontrollably if you’re the imposter in the recently popular game “Among Us”. For the majority, it is the thrill of being able to pin the blame and successfully lying through our teeth that makes us tick.

If that is you, and you’re plain tired of doing the same body scan at Medbay or uploading tasks in Admin, here are some other social deception game alternatives that you will definitely enjoy. From simple guessing games to more complex strategy ones, here are 9 “Among Us” alternative deception games to hone your lying skills.

Check out other online games to play:

Awkward silences during triple dates can be broken with this word deception game: “Undercover”. Requiring at least 6 people to play, the game involves civilians, undercovers and Mr. White, and the number of each appointed role can be tweaked by you, based on the number of players you have.

Each player is given a word – it can be anything under the sun from Batman to Fork. Lucky players chosen as civilians will get the correct secret word, while undercovers will receive a similar word – let’s say Superman or Spoon.

As Mr White, it gets tricky as you are the “spy” who will not receive any word. Your task is to guess the secret word based on the clues from other players. Here’s a tip for those undercover: create your clue from using synonyms of your friends’ clues. But be smart about it. Draw enough suspicion to yourself and you’ll be out! Channel your inner Sherlock Holmes as you put your detective skills to the test in a game of “Krimi”. Hardcore fans of “Murder in Hong Kong” will adore this game, as the two share a similar concept of guessing who the killer is among your group of friends.

Players will be divided into detectives and one murderer, while the scientist will be unanimously appointed – so choose the person who you think can give the clearest descriptions. The scientist knows all – the murderer, the weapon, and even how the kill was executed – and will be answering at least six questions from the players to help the detectives solve the case.

The game ends when a detective manages to guess and explain the three aspects correctly, and pinpoints the murderer. 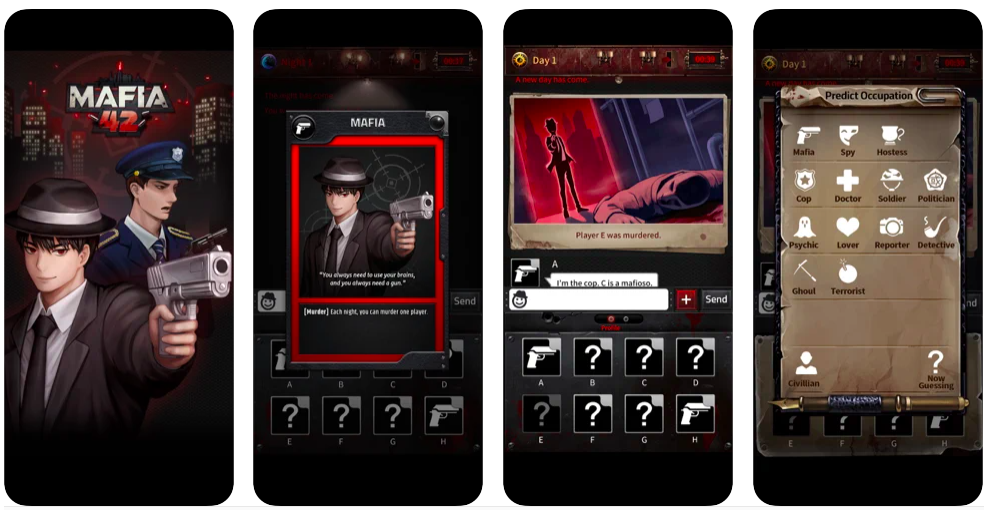 Deception games that require oral communication over Zoom or Discord are definitely not for those with weak poker faces. “Mafia42” is an online game that removes the camera and mic to give you full coverage to play out all your lies. It is also convenient to play on the go since the game is in portrait – you can reply messages while playing on the MRT.

As the Mafia, your job is to kill the Citizens during “night time” in the game, while the job of a Citizens is to, well – survive. Citizens will also be given special abilities like healing and investigating to help you nail the murderer before your whole team gets annihilated.

If you’re a fan of RPG games, then the “Town of Salem – The Coven” will speak to your soul. It functions on the same rules as Mafia42, just with a more old-school interface with characters reminiscent of Habbo Hotel.

The game features an extensive character list of 48 roles which will be delegated at random, guaranteeing a unique gaming experience each round. Some of the more unique characters include a Jailor that can imprison players, a Medium who can communicate with the dead, and a Psychic who will receive visions about the identities of different players. “Secret Hitler” takes deception games up a notch with its complex yet super engaging strategy-based concept, as you rack your brains trying to figure out who the secret Hitler and fascists are. As one of my personal favourites, this game is all about building a trusted relationship with your peers, just like in “Among Us” – you’ll be shocked by those who manage to lie their way into your heart.

The main aim of the game for the liberals a.k.a. the good guys, is to enact five liberal policies or kill Hitler, while fascists work towards electing Hitler as the Chancellor after three of their fascist policies are enacted. Either muster up your best poker face as you win the liberals over, or blow your cover and get exposed as a fascist.

Though this may take a few rounds for everyone to finally get into the swing of things, it’s truly worth all the frustrations navigating through the thick rule book.

A game of knowing how to skillfully play your cards, “Saboteur” requires the miners to build a pathway to the gold at the finish line, while saboteurs, as its name suggests, will try to sabotage the process of building – think of them as imposters in “Among Us”.

Saboteurs can make use of the action-block, path-block and demolish cards to make building a lot harder, or intentionally mislead the miners if they have the advantage of using the map cards to peek at one end goal card.

P.S. A tip as a saboteur is to convince the miners that you’re on their team by facilitating the building of pathways and unblocking your fellow miners when their actions get blocked by other saboteurs. Only reveal yourself towards the end when things start to get more heated!

You’re not a true student if you have never secretly played a game of “Werewolf” on your phone with your clique during a lesson. This OG game has inspired many other similar games, and has even given rise to a special Telegram bot, making it very convenient to facilitate a game in your Telegram groups even when you’re on-the-go.

Stealthily kill your teammates and pray that the seer has not already found out your identity at the start of each night – and remember to act fast before the suspicious catch on to you. If you have a way with words and lady luck seems to always be on your side, you’re going to like Spyfall. The rule here is simple, just guess the secret location.

Each player is assigned a role that’s related to this secret location; the spy however, gets nothing. In each round, players will ask each other questions to try and determine who the spy is.

In this game, ambiguity is key and if you manage to somehow weave your way out of their suspicions, chances are that you will successfully guess the location before you blow your cover. Games that require game masters may leave that sad elected friend feeling fomo. Luckily, “Avalon” lets everyone join in on the fun. Your group will be separated into loyal servants of Arther (the good guys), and minions of Mordred (the bad).

The aim of the game is for the servants to complete three quests, while the evil wins if they can manage to sabotage the quests or assassinate the head, Merline.

Players may or may not know who their enemies and allies are, based on their different roles with different abilities.

Have your way at bluffing your unsuspecting friends into letting you join the deciding team if you’re evil, and reject the quest at the last second to make the quest unsuccessful.

We all know that one friend who refuses to ride on the trend of playing “Among Us”, and actively calls people out for being basic by sharing “Among Us” memes. If that’s you but you secretly enjoy the concept of the game, you can check out these other 9 deception games that do not involve venting and aren’t that mainstream, to play with your group during your next Zoom call.

Check out other fun things to do with your friends: 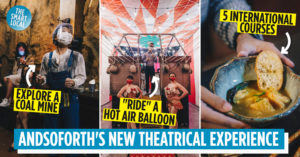 AndSoForth’s “Around The World In 80 Days” Interactive Dinner Lets You "Travel" Without Leaving Singapore
5 New Things To Do In November In Kallang and Geylang - Mural Trails, Light... 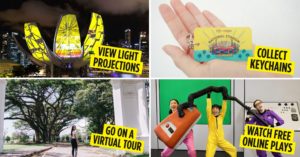