I searched for “Frozen” on Google and on page eight of the search results I still end up with “Frozen – Netflix”. It’s exasperating, and really makes one wonder if people ever search for anything outside of the movie. I attempted again with “Frozen the play” and I got one Wikipedia entry on the correct result but the nine other hits on the page still revolved around Elsa and Anna.

Therefore, it is absolutely okay to assume that Pangdemonium will be staging the Frozen. It is also fine if you got all excited, thinking this is the time to catch Adrian Pang, Janice Koh and Karen Tan belting out done to death covers of Do You Want to Build a Snowman and Let It Go.

All that isn’t happening though, so wipe the glee off your face and put that tub of popcorn away. Not only is the magical Disney Frozen not happening, the Frozen we’re talking about here is a riveting, chilling story that is bound to draw you in and have you questioning your own beliefs. 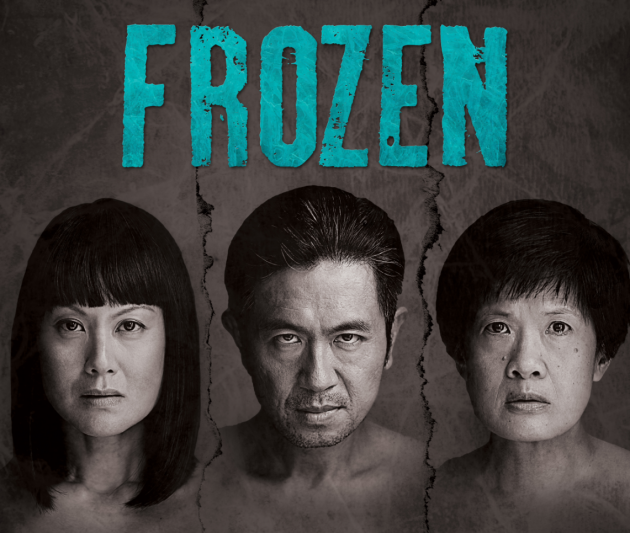 I talk to Adrian and Janice to find out more about the play and the uncanny relationship their characters share.

TSL: Tell us more about the play and why people should see it?

Adrian: Frozen is essentially a story about three individuals who come from very different worlds and who are connected by a horrific incident that has happened to a young child. Nancy, Agnetha and Ralph are the most different people, who exist in different worlds. Their worlds converge into one because this child was missing. It’s basically how three of them make sense out of this very sense-less incident. Ralph isn’t just a killer, he’s done this over and over again. To the normal person this is unfathomable. This is how three people come to grips with how such a thing even exists.

Janice: There are a lot of monologues where the characters speak their minds. And you have a character like Ralph who doesn’t need to make sense at all. Karen’s character tries to find some kind of closure but clearly, that’s not easy. That’s the journey the audience takes with her. Is there a closure, can there be one? What do you need to happen for her, as a mother, to forgive and forget? Guilt of a parent who’s lost a child in this manner and all the emotions that come with that slowly gets played out in the drama. My character is antithetical to Karen’s character.

I represent sense, logic and science. That means examining the criminal mind, finding a reason for actions, trying to find some kind of cause effect relationship between his behavior and what has happened to him in the past. It’s approaching a tragedy from very different perspectives although ultimately there is no moral, logical answer to why it happened. We can answer the ‘how’ question but not ‘why’. We don’t live in an universe where things are so simplistic.

Adrian: Yeah we don’t live in a world where we can put things in boxes. There are no straight answers.

TSL: Is the play sympathetic to his character?

Adrian: It’s very hard to sympathise with him.

Janice: I wouldn’t say it’s sympathetic, but it tries to expose all these different narratives in a way that doesn’t allow the audience to make a simplistic judgement. But once you get an insight into someone’s psyche, you inadvertently empathise. So it is interesting to listen to the different threads and stories.

Adrian: There will be some element of judgement; it’s so easy to judge right from the start. As his history is slowly revealed, you get to see just a glimpse into how his own background helped to shape this thing he grew into. It explains it, although I don’t think it justifies what he’s become. It’s just horrific and it’s disturbing just doing research for my character. Karen’s character represents all the emotions in the piece, because as a parent it’s all about that.

Janice: It’s easy to put Ralph into a box, because he’s just evil. But what makes the story interesting is having someone on the outside, bringing in a different color to the story. My character tries to understand it a bit more logically and puts the audience in the position of the judge. If Ralph did something evil because as a child, and something bad was done to him, who takes the blame for that? Is that act more or less justifiable?

Parallel to this thread is Agnetha’s personal life where she has done some wrong. Are those minute instances less justifiable? She’s had an affair. The impact and the violence of her action might seem so much less compared to Ralph’s upon these girls. But it still hurt people.  The play explores concepts of violence, remorse, and guilt.

Adrian: And the concept of choice. You knew that something was wrong, yet you made the choice to do it. Did Ralph have a choice? Was it out of his control? It does throw these questions out.

Janice: Each of us may have a Ralph in us. Is there something in us that makes us do stuff like that?

TSL: What made you choose this play?

Adrian: We just have an obsession with dead children (laughs). Oddly enough this is completely unconscious. This is the third in our trilogy of lost children. The first was Rabbit Hole.

Janice: We thought that was hard!

Adrian: Yeah, that was already kinda pretty dark.. A child dying in an accident; very tragic and gut-wrenching. And then we did Next to Normal – a family who has to deal with a bipolar mother.

Janice: At least we sang through that! This one is no holds barred.

Adrian: Yes. If there’s any comparison, this one (in Frozen) was lost in the most horrific circumstances. It wasn’t an accident, this child suffered through pain, torture and sexual assault before dying. It’s every parent’s nightmare.

Janice: Because even the hard stories need to be told.

Adrian: Yeah! It is a difficult story to tell, it is one that needs to be told. The themes will always be relevant.

TSL: Okay so how many people thought you were staging the Frozen?

Adrian: We get that a lot. Everyone asks what we’re doing for the next production and when they hear it, they light up! And then three seconds later you can see their faces and they go ‘really?!’

Janice: This is one of the plays where people ask “so what are you doing next?’ and you go (mumbles) “Frozen..”

Janice: I think we should put a sign out front that says “This is not the movie. If you thought it was, you can ask for a refund at Sistic”. I should put a tiara on and go “No! I’m not Elsa!”

-On their parts and getting into character-

TSL: How is it like working together again? (Janice and Adrian also starred in Rabbit Hole in 2013)

Janice: We only ever come together to do this sort of thing! (laughs). Our characters are always so alone!

Adrian: Yeah our characters are always thrown together, but not knowing how to connect.

TSL: And if you happen to work together again..?

Janice: I would want to do comedy, not stand-up, no singing, but something funny.

TSL: What are some of your favorite scenes?

Janice: It’s hard to say because we start in a week.

Adrian: Yeah we have very intense and short rehearsals.

Janice: The one where I get drunk I guess. I think I should do method, just for that scene!

Adrian: (Laughs) So after that scene, if you hear sounds of throwing up, that would be Janice trying to get rid of the alcohol just to carry on with the show.

TSL: How has being in this play affected you both as parents?

Adrian: I see before my eyes my sons grow into young men. As a father, and as a man, watching these boys grow into men, I’ve always felt the pressure and responsibility of trying to be a role model.

It’s become an unspoken agenda for myself and I mess up, I mess up everyday. It’s a tall order. It’s making me grow up a little bit, more than I’m ready for(chuckles). I certainly have felt it from the shows we’re doing, that I have an impact in my sons’ growing up. I’m conscious of the things I say, and the things I do.

Janice: As parents, when you approach the script and encounter examples of young children being abused, you might feel that it’s such a huge distance. The inability to understand why some parents would abuse their children. My character tries to make sense of why people do what they do.

Agnetha’s research as a psychiatrist discovered that a lot of criminals were abused as young children and therefore there is an inability in their brain to process what is right and wrong. Because of the abuse, the stunted emotional development, these people turn out to be adults who do things to others without feeling the emotional consequences of their actions. And being parents, you are made more aware of your actions and how they impact the social and psychological development of your children.

In our rapid question series, we ask a few questions and interviewees have one second to come up with their answers.

TSL: One other local play you’d recommend other than ones you’re in?

Adrian: Pangdemonium’s next show – Circle Mirror Transformation (giggles). I don’t get out much, that’s why I don’t know what is going on.

Janice: Let it be put on record that Adrian Pang does not have an answer to that question.

TSL: If you could watch one play for the last time, what would it be and why?

Adrian: I don’t know what I want to feel! It’s like your last meal, do I want something sweet or something salty?

Adrian: Philip Seymour Hoffman’s Death of a Salesman. He’s a tremendous actor and I’ve always admired him. That’s a play I would love to do one day as well, I love the writing.

TSL: If you could play any character, what or who would you play?

Janice: I’ve always had this weird desire to play the lead character in the doll’s house. I don’t know if I just love the idea of slamming the door at the end.

Adrian: (Laughs) You’re just going to be crap for the rest of show but “wow Janice Koh slams the door with utter conviction!”

Janice: “She slams the door because she leaves. She leaves the house she’s trapped in”. As a theatre student I’ve always wanted to play the character that slams the door.

Adrian: Mark Wahlberg in Transformers, for his paycheck.

TSL: In five years’ time I will be…

Janice: In a hammock somewhere.. I’d also be a PSLE parent.. It’s a one-year phase where you start to see parents taking leave.

Adrian: Has never been a more exciting one to be in than it is today.

Janice: Is more appreciated and recognised today than it has ever been before. 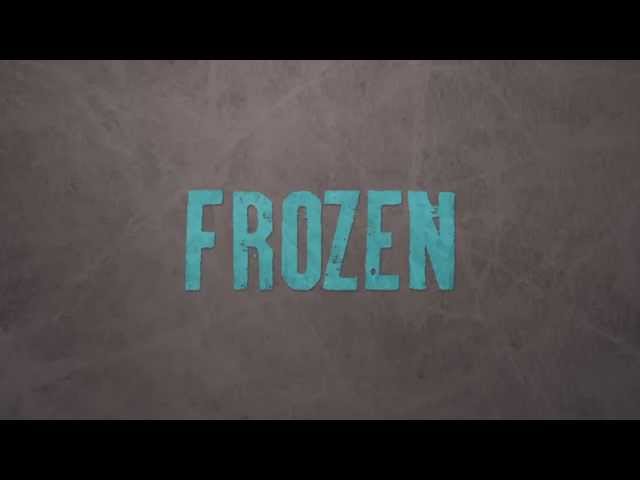 Getting Tickets to catch Frozen

Frozen, a play staged by theatre company Pangdemonium, will run from 23 October to 9 November 2014 at the Esplanade Theatre Studio. Get your tickets – prices at $40 – from Sistic.