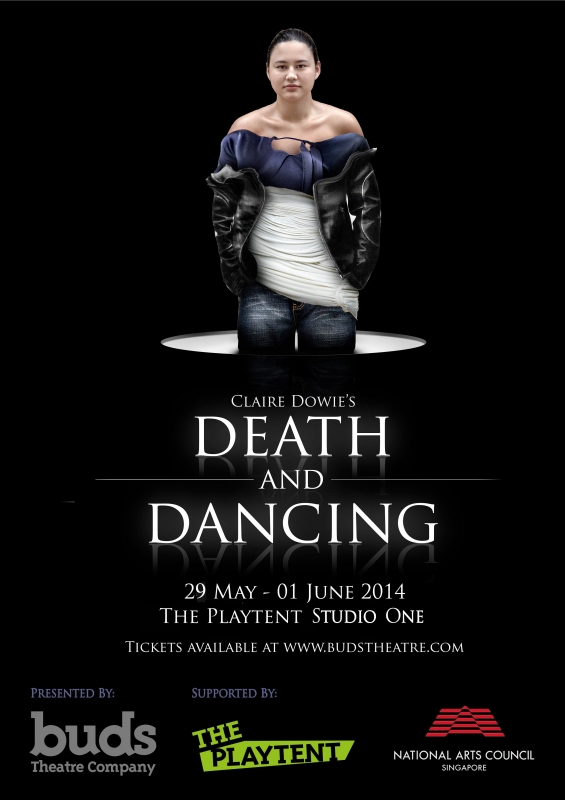 Buds Theatre Company restages its 2008 hit – Death and Dancing, a humorous and uplifting play about Max and Max, a gay man and lesbian woman, trying to break free of the shackles of society.

The story, originally written by award-winning writer Claire Dowie, discusses love, sexuality and the choices that we make in our lives under the direction of another Claire D – Claire Devine.

Judging from Pink Dot’s exponential growth from 2,500 people in 2009 to its record attendance of 21,000 last year, it attests to the increasing social acceptance of LGBT people in our city-state.

We caught up with Claire Devine to find out about Buds’ origins and future, her thoughts about the LGBT community, as well as the upcoming production.

Q: Why did you guys decide to restage Death and Dancing?

Primarily because it’s a damn good play. It is a really, really well-written play and is very pertinent to Singapore. The first time we did it, we received so many rave reviews, and have always wanted to do it again.

But we could never find a suitable replacement for our male Max. We couldn’t find anyone immediately because it really does take a certain person to play the role. There were a couple of guys who auditioned but we turned down because they were very “straight”. We wanted someone that is kind of androgynous and quite textural to make the play more interesting.

Q: What do you like about Zuhairi Idris, who is playing the male Max this time?

We never came across any guys over the years that really resonated with us. But when Zuhairi came along, he was amazing. It was interesting that Zuhairi, as a Malay-Muslim, would step forth to do this play, and recognizes the value of the play. He brought something very interesting to it and he’s been a wonder to work with.

I think any director would want an actor that is going to take direction and bring back whatever you ask for, times ten. It is a continuous relationship and like a painting, you add texture to it, and add more things to it each time.

Zuhairi is like a lovely palette box who brings his own colour: I can add definition to that colour, he adds a little bit more, and I add a little bit more on top of that. That’s what I like about Zuhairi – I feel that he brought a lot more to this play than what we had the first time round. He is very innocent and naive and that’s quite cute because he reads something into the play that we don’t. It’s nice to have his perception, plus he’s a good fit for the character.

Q: What are some of the main differences between the 2008 version of Death and Dancing and the upcoming one?

Age and experience for myself and Rebecca, who is acting in it for the second time. And then we have the addition of Zuhairi, who is bringing some very fresh ideas as he’s such a thoughtful actor. As far as the language and writing goes, it is already good. But I think we are getting more out of it – we are speaking even louder.

I think what was so successful about it the first time is that it’s already a wonderful script. People asked us for the script after the show because they felt that so much of it resonated with them. That has never happened to me before. These people wanted to read and discuss it, and then send me emails about it.

The people most moved by it were actually straight men, and that was not what I expected. I was sort of expecting all these young people to go “yeah we can be different, let’s discuss that” but it was more straight men in their 30s and 40s who have already made choices and now want to make a new choice, perhaps?

Q: What is it about Death and Dancing that makes it so vital to not only theatre, but the wider society and world?

The whole world has been controlled by men, and men think a certain way. Because of that, we have subscribed to a particular way of thinking that kind of came from something that has gone before. We are not looking forward but always looking back, and trying to fix what went wrong in the past rather than looking to what we can create right in the future. I know these two kind of go together, of course they do, but we have been pushed into these little boxes.

In Singapore, it’s vast because of the whole streaming process, kids are sometimes forced and pigeonholed before they even have the chance to explore. So why are you making these choices and who are you doing it for? Why do we conform and why do we need to conform? I do believe that most people were at some points in their lives isolated somehow and felt different, and this play addresses that.

Q: What do you hope to achieve through the upcoming play?

We hope to get enough young people in here. I want to create a voice so that they can speak out. There was a group of young gay men who were here and felt different but did not know how to fit in. And that for me, that means there’s a need to talk.

So I’m hoping that this will facilitate the need to talk. Putting it inside this intimate space means that people can stay behind afterwards, talk to each other and perhaps be a bit more open about their thoughts and their choices and whatever and not feel isolated.

Q: Why did you come to Singapore and what made you stay?

My husband got a job here…Wait, he wasn’t my husband at that time, we were just young people coming to Southeast Asia for an adventure to see what would happen. We were here on a two-year contract, but I fell in love with Singapore and the people I work with after the first year.

For me, this is a wonderful place because I can see the value in what I do. At home, I could see it too but it wasn’t necessarily as rewarding. I have always worked with, and probably will keep working with young people and theatre. I feel like I actually make a difference to people’s lives. I feel. Hope. Pray.

Q: What do you think about the LGBT community in Singapore?

I’ve been in Singapore for 18 years and have seen a big shift in the power of women. Young women have more say in what goes on and are readily making more choices. Because of that, it kind of “de-masculates” men a little. So when it comes to building a relationship, there aren’t the men that these strong women are looking for and so they are going to their counterparts and female peers for relationships instead.

Nevertheless, we’re not as accepting as it is in other countries and don’t have the “normal” gays and lesbians. By “normal” I mean people just happily living their lives as husband and wives. My mother-in-law is gay and she’s happily married to her wife and you know, they’re just normal people, they don’t pretend to be something they’re not and we don’t have that here.

I’ve met a couple of lesbian couples that have “gone under the radar” a little bit, but they still have their own core groups, they still live in their own safe environment and don’t step out of it so much. But I do think that the young generation are getting bigger, braver and bolder, and I think that has to be encouraged.

I don’t care who you sleep with, and who the hell cares anyway? I should just be dealing with you as a human being and not who your sexual choices are. So why the hell do we have stupid laws like that for?

Q: Having been both an actor and a director, do you personally prefer acting or directing?

Can I say both? There haven’t been a lot of opportunities over here to act. My children go to very expensive schools and I don’t have a rich husband so I have to work hard.

But there are days when I’m directing somebody and wished that I was on stage doing the play with them rather than sitting behind the chair. I think I like directing young people, like secondary school students and stuff like that.

Working with good actors can be so much fun. I enjoy the fact that we do workshops and the processes that we go through. But I love both acting and directing! Theatre has always been my life.

Q: Why did you decide to establish Buds Theatre Company rather than joining an existing theatre group in Singapore?

I’ve been working with a couple of schools. We put on shows with these schools, and then there was nowhere for them to go when they wanted to do more. But they couldn’t afford to go to the paid ones.

I happened to be talking to a man called William Teo from Asia-in-Theatre who wanted to establish young people within his theatre company so it would grow. So we collaborated and he offered me a space. I, on finishing a project with two schools, said “let’s carry on, let’s have this youth theatre” and it was very successful.

Q: What can we look forward to from Buds Theatre Company in the coming years?

More youth empowerment in the coming years, definitely. I feel that we’re the one of the few theatre companies here that are set up for somebody else to take over and run with, rather than for the artistic directors.

There’s also a lot of new, relevant writing coming up. We just did two plays by the youth theatre at a secondary school and the comments after that were “wow you’re brave” because we were challenging perceptions there and both plays were about the government. We did them for the parents and the kids and both plays were very well-received.

We have a new show about a Muslim family that’s coming up at the end of the year and it’s called “Pigeons”. It’s about the Muslim community and the choices they make, another very well-written play.

COME SEE THE SHOW! It really is a wonderful show with good actors and it doesn’t matter what your sexual preference is, just come see the show. If you appreciate good literature and a night out that will make you laugh, it’s the place to be.

Catch Death and Dancing this week!

Venue: The Playtent Studio One

Tickets for Death and Dancing can be purchased here.