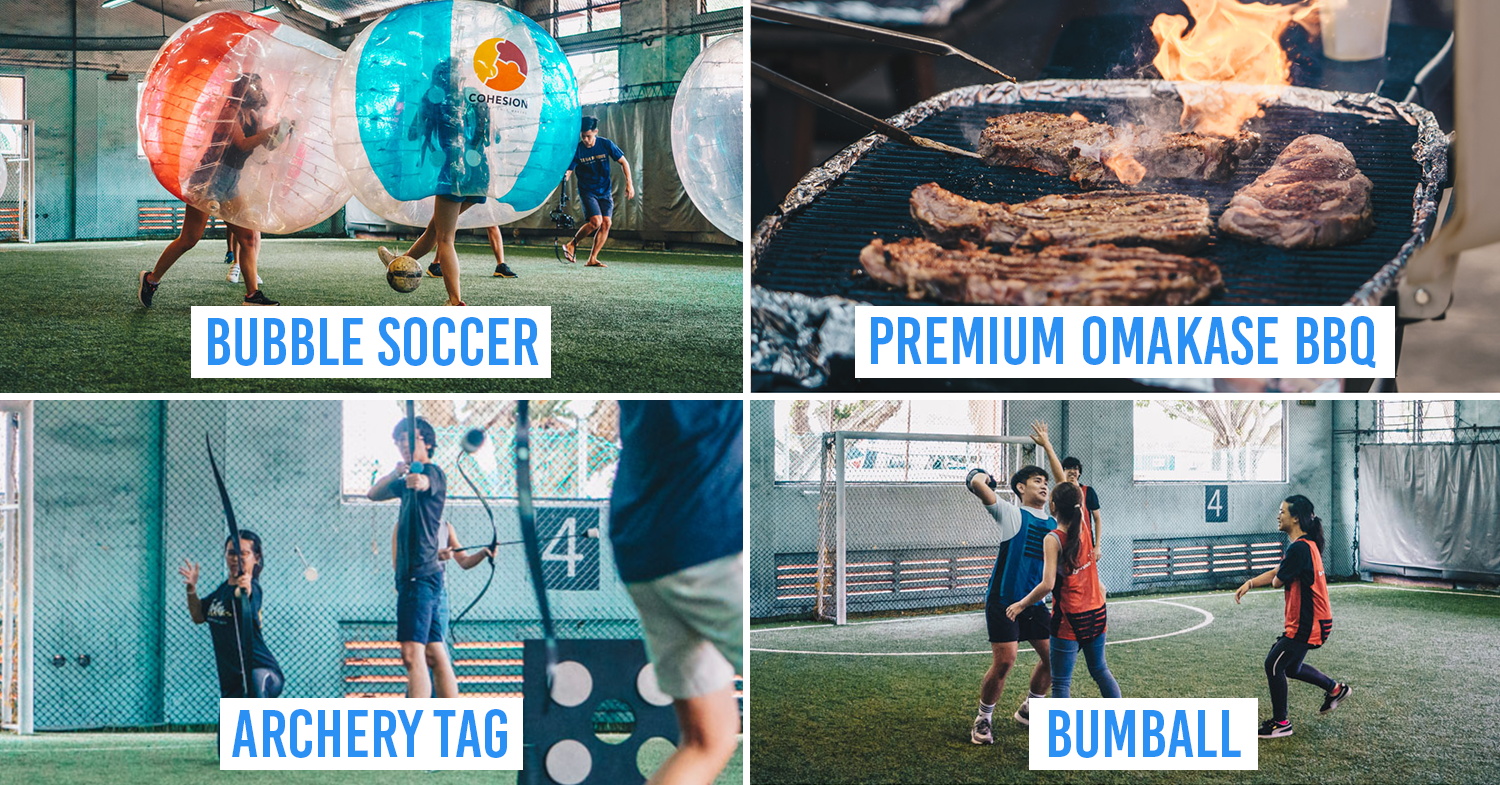 Seeing that Chinese New Year is just around the corner, you’re probably getting ready to make your rounds of visitations to friends and family. But other than spending time with your loved ones, take this festive period to bond with the folks you spend most of your weekdays with at your second home – your fellow colleagues in the office!

From exhilarating games like Bubble Soccer to a premium BBQ sesh, here are some activities from Cohesion Singapore for an epic team outing: 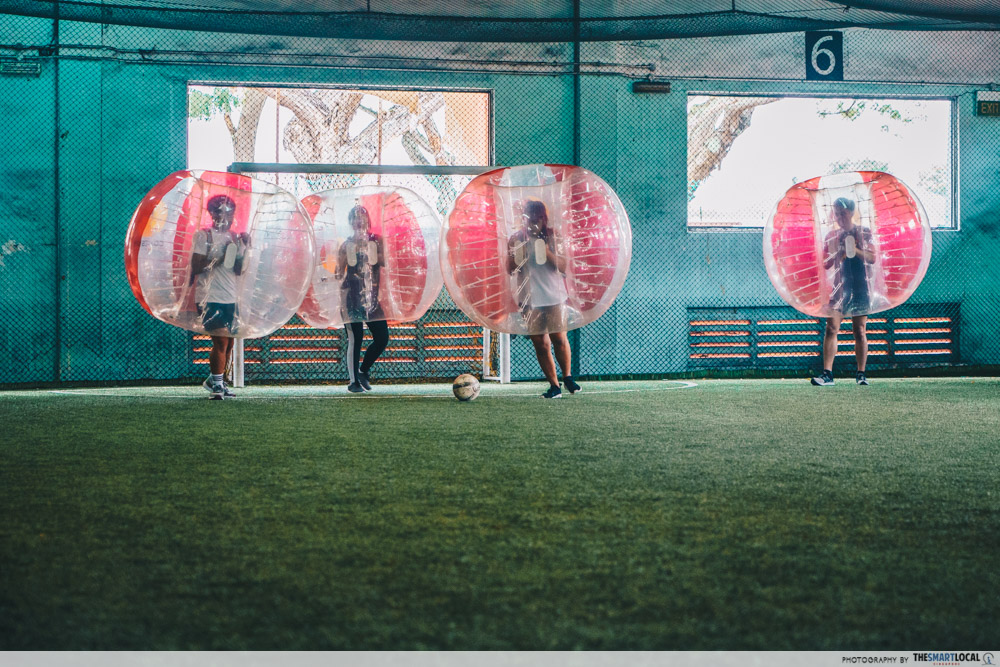 Falling on your butt alone can be embarrassing, but when it’s with a bunch of people, it becomes a bonding affair. Put your sense of balance to the test with bubble-themed games, As its name suggests, you’ll literally have to suit up in a lifesize inflatable that’s shaped like a bubble throughout the entire game! 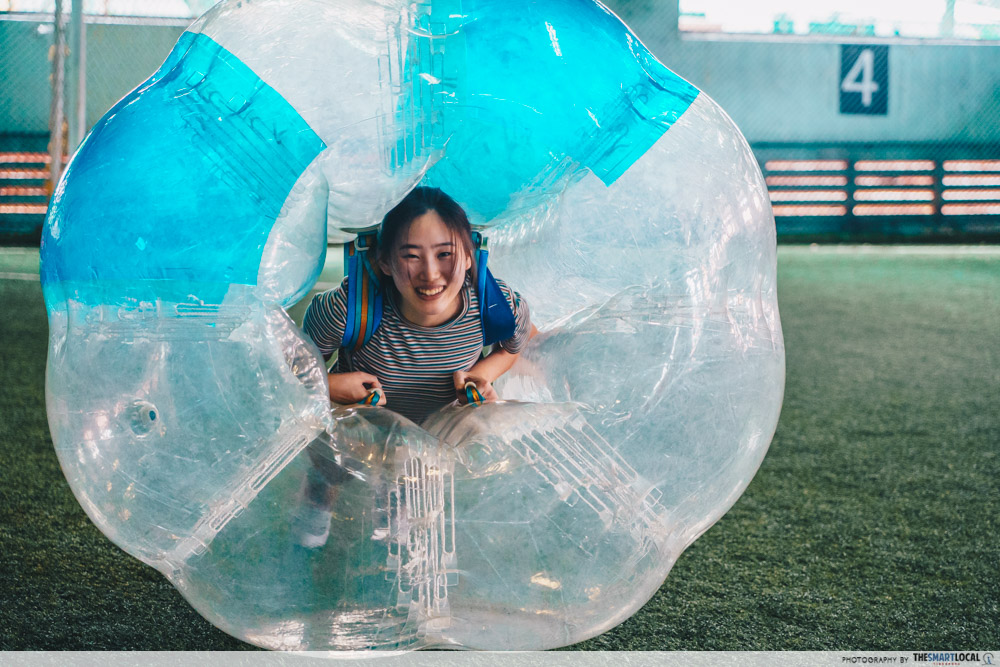 Pro tip: Hold on tight to the inner handles for extra support when you don your Bubble Suit, so you won’t be rolling around in front of your colleagues.

Split into 4 game modes each harder than the next; this line-up will have you sweating in no time.

We kicked things off with a warm-up round of Bubble Dodgeball, where we tried to avoid being hit by our bubble-wrapped colleagues. This game requires you to get into the competitive spirit by charging towards your opponents with all the strength you can muster to knock them to the ground – it’s every man for himself.

If you’ve ever played capture the flag, you’ll be familiar with the chaos of people running around in every direction. For Bubble Invasion, the game concept is similar, but all you have to do is get all your team members over to the other team’s territory before they invade yours.

Instead of having the entire team make their way to the opposite end of the field like Bubble Invasion, Bubble Captain only requires the captain of each team to enter the opponent’s base. Don’t be fooled by the seemingly simple feat – it isn’t as easy as it sounds.

Other than escorting your captain to the enemy’s land, you’ll have to strategise well so your base is protected from the other team’s attempts to invade it. 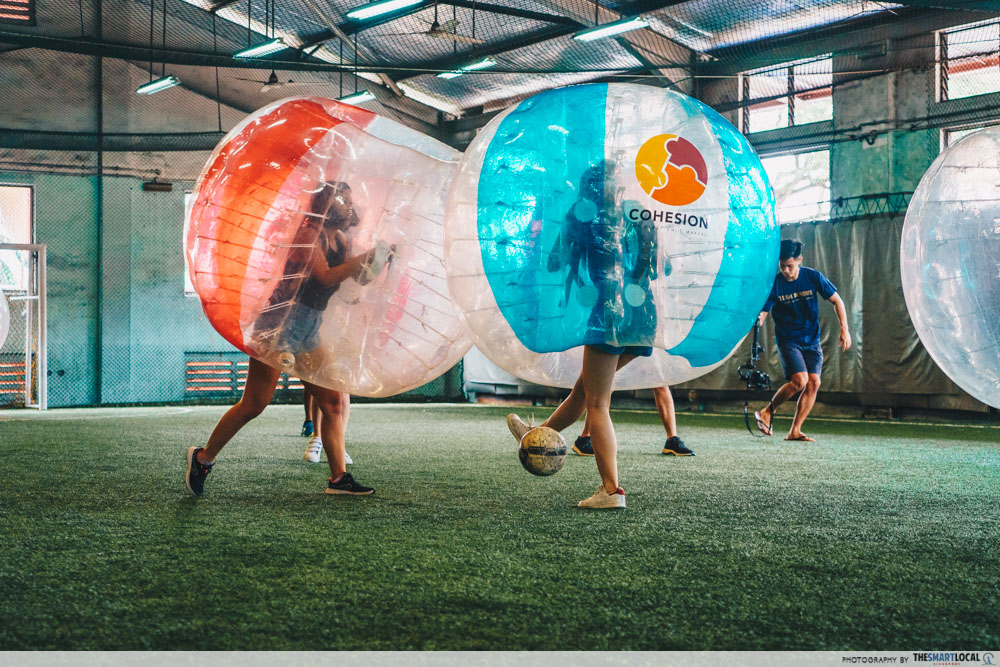 To end things off on a high note, we hopped straight into a heart-pumping game of Bubble Soccer. Like regular soccer, but with a twist, your team will have to attempt shots into the goal post while trying to avoid being knocked down by the opposing team. 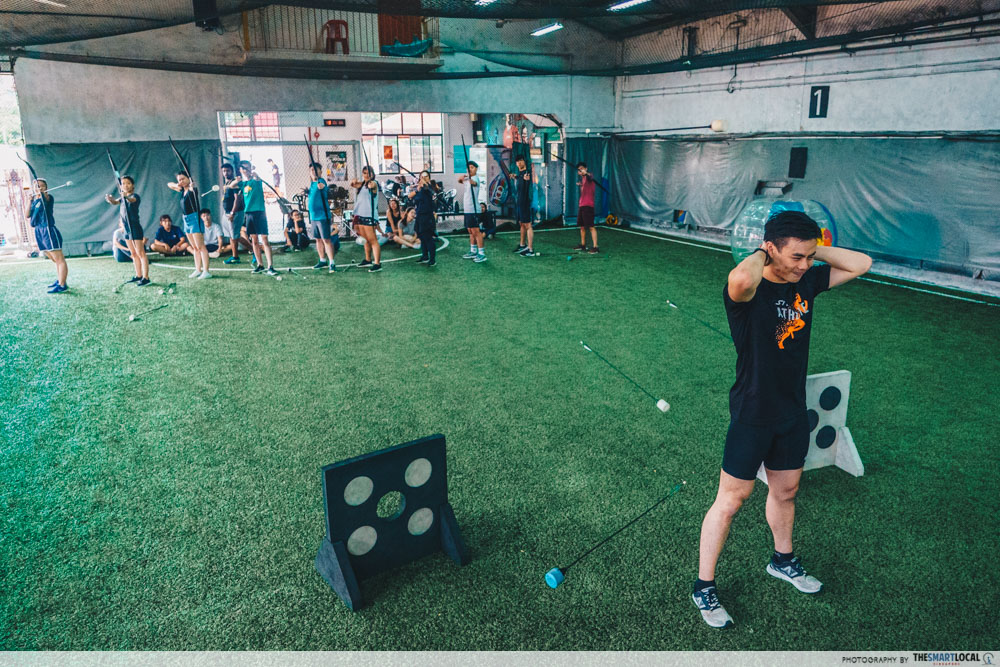 If you’re always being arrowed by the same colleague at work, Archery Tag is your chance to playfully take revenge – by shooting back soft foam-tipped arrows, of course. Taking on the likes of Dodgeball that we’ve all played during P.E. lessons, this game requires you to aim and shoot at the opposing team. 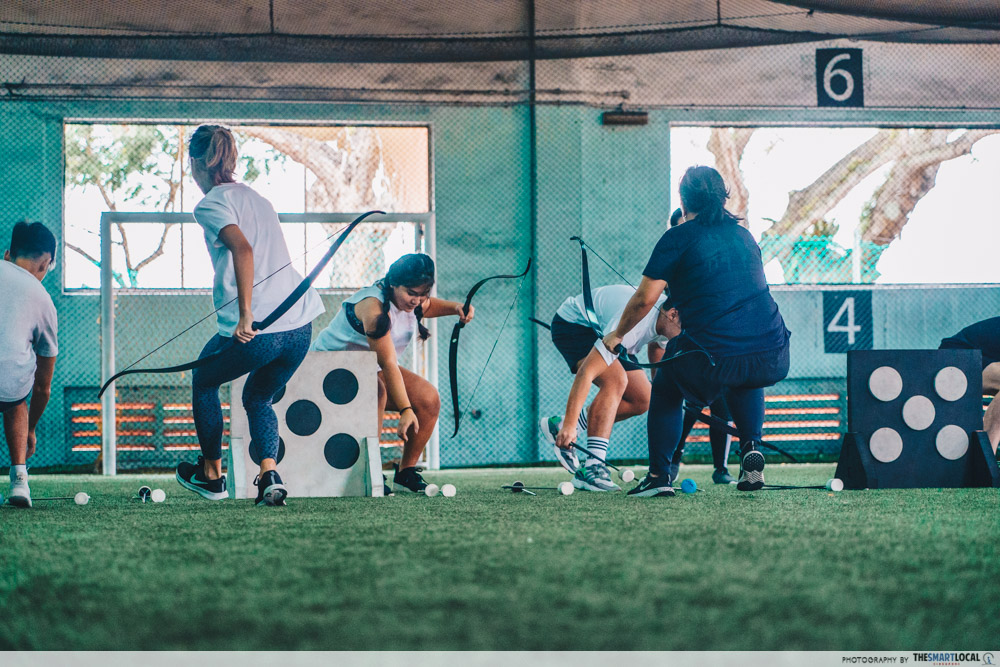 Once the facilitator blew her whistle, we rushed to the centre to snatch up arrows as our arsenal.

There will also be 2 target boards fixed and centralised in the field. Upon hitting all 5 targets of your assigned board, your team automatically wins the game. To prevent being knocked out of the game by flying arrows, catch them with your hands to cancel out their point. 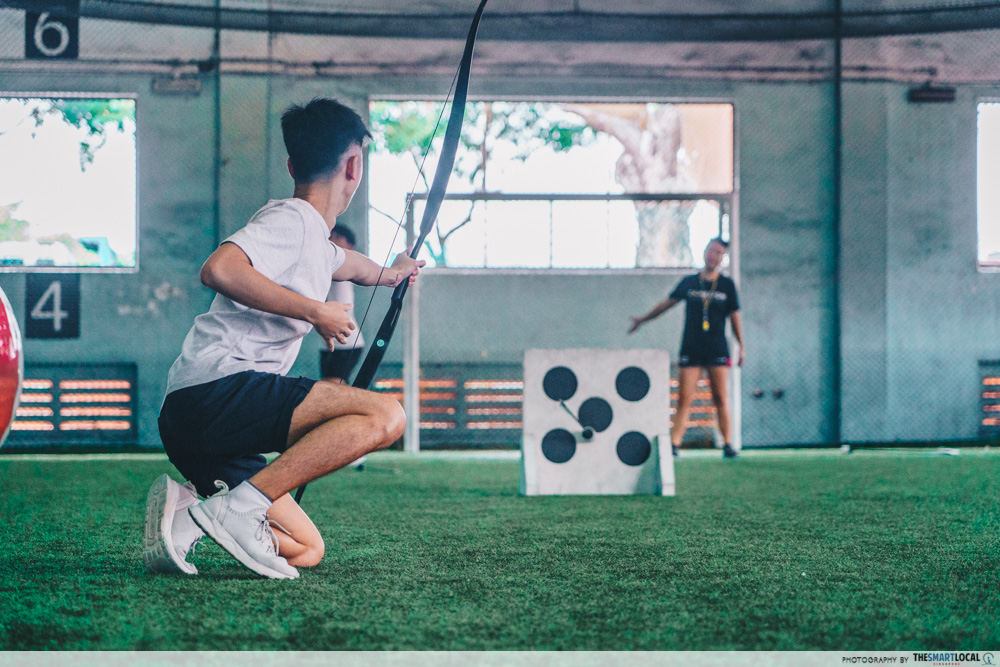 P.S. Every time you catch an arrow or knock out a target, you’ll get to revive one of your teammates to keep the game going. 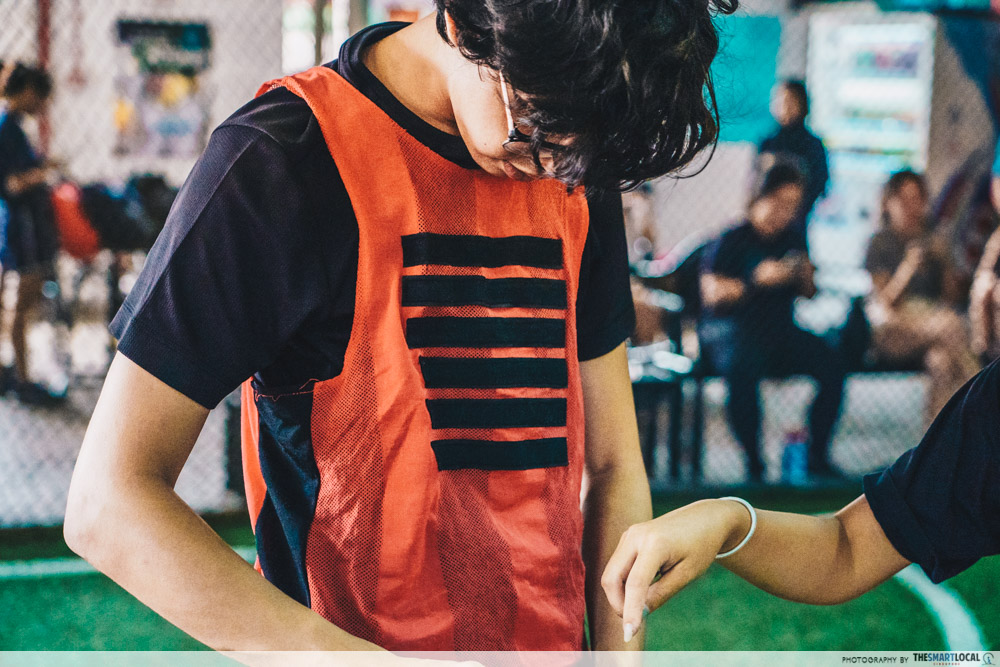 In the game of Bumball, you’ll be wearing a vest with velcro strips across your chest and well, bum. After picking up the ball with the velcro parts, quickly toss it to your team members. Upon 3 successful passes, you’ll get to throw it to your captain and secure a point when they catch it with the vests. 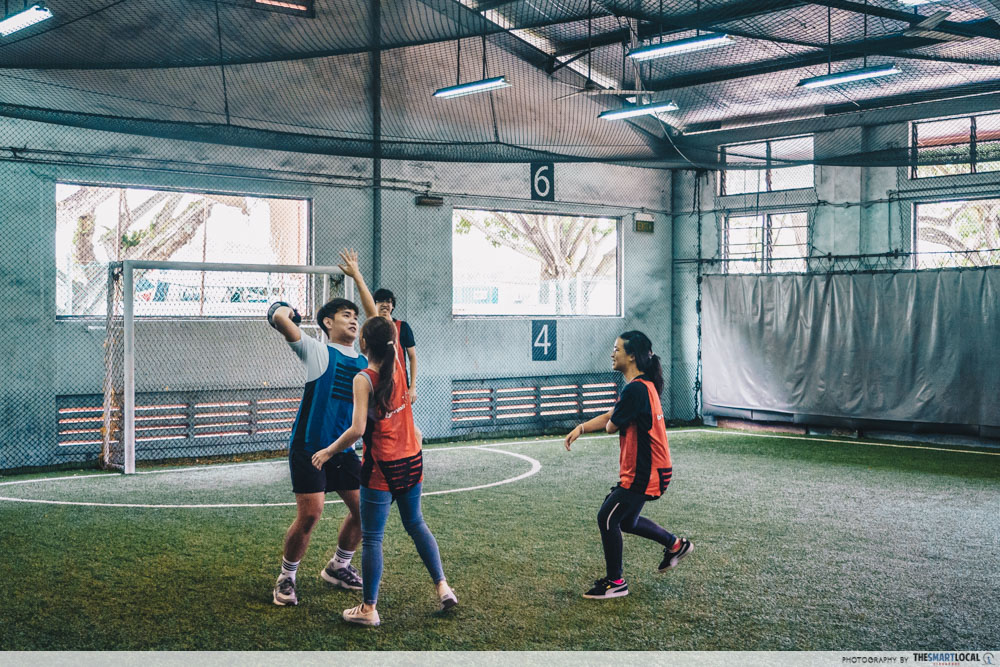 Snatching the ball from your opponent is a big no-no, but you can definitely whack it in mid-air and pick it up with your velcro vest.

While accidentally sitting on one another’s hand during the game wasn’t part of the plan, I’m pretty sure it’ll make future instances of waiting for the office lift together less awkward. 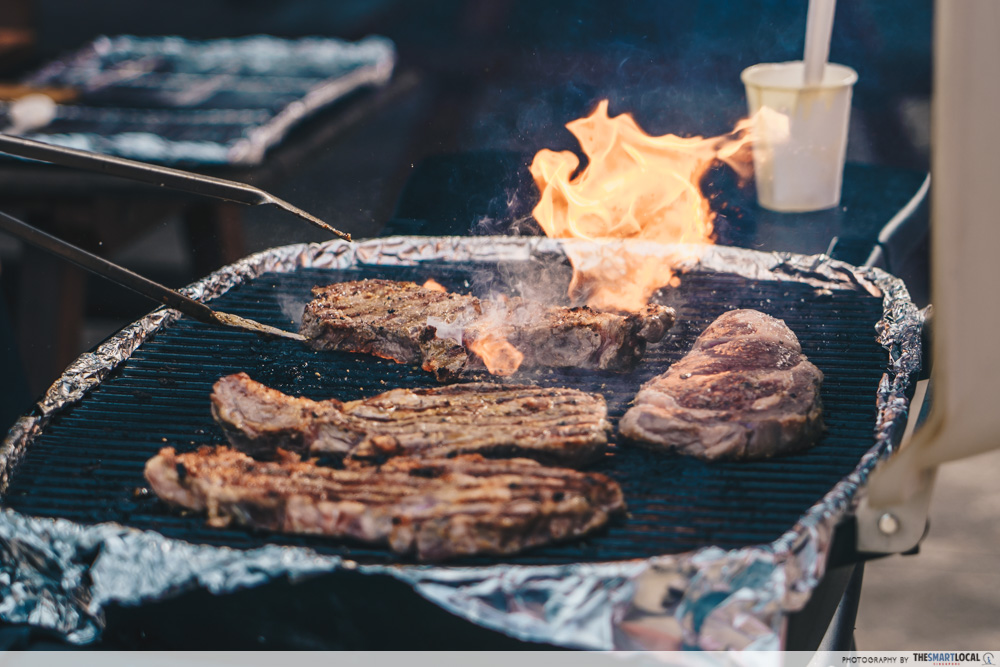 There’s nothing quite like a good ol’ BBQ sesh to bond with your fellow colleagues. But let’s be honest – the mere thought of prepping the pit, flipping the food every few minutes and cleaning the grill just doesn’t seem worth the trouble. 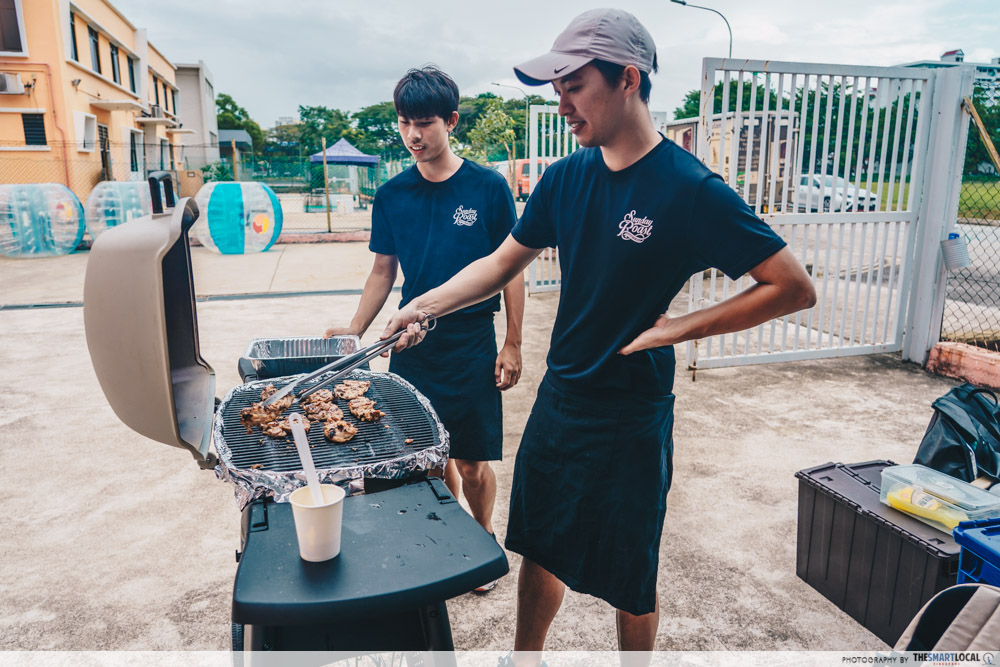 Leave the grilling to the professionals from Sunday Roast

Skip the trouble of getting hands-on with Sunday Roast’s 2-hour Premium BBQ ($60 per person), a shiok omakase dining experience where designated chefs handle every detail from start to end. All you have to do is pig out over the spread of tasty dishes that’s being served. 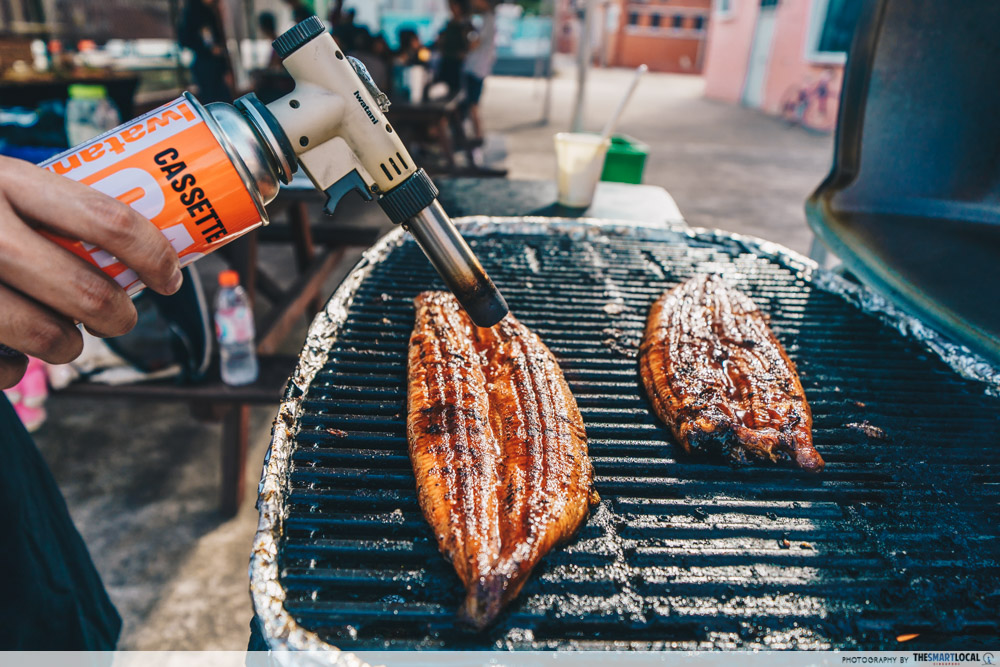 The crowd-favourite was definitely their savoury Unagi.

An array of meaty selections like their Signature Honey Soy Chicken Leg, Angus Beef Ribeye, and New Zealand Rosemary Lamb Chops will be coming in hot! There are also lighter bites like sticks of satay, Smoked and Cheese Infused Pork Bratwurst to get an overload on cheesy goodness, and even pretzels! 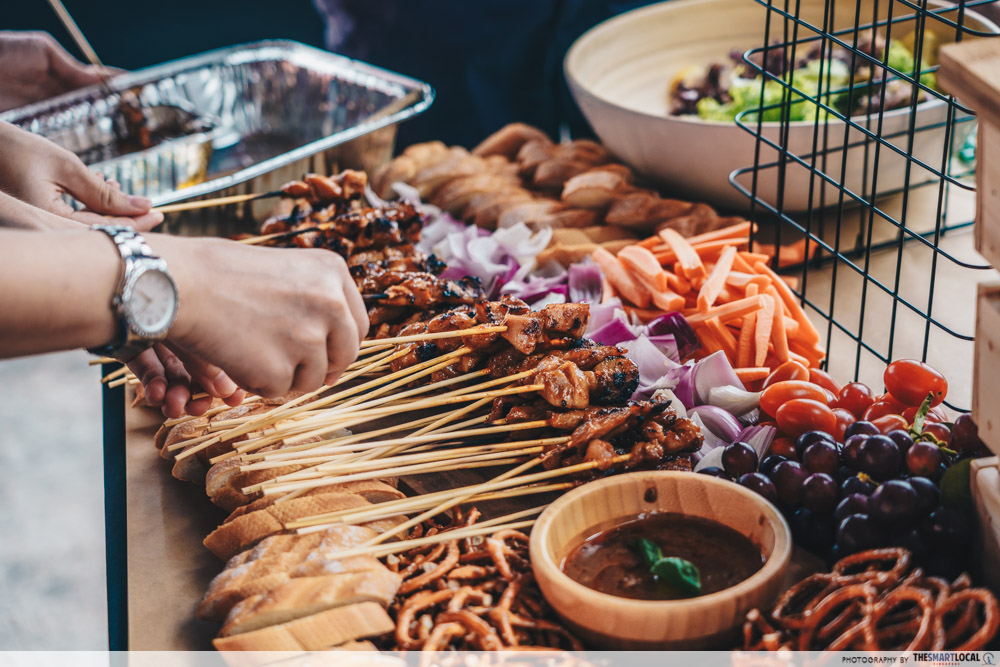 But that’s not all – they even have grilled unagi and Furnace Pizza will be on site to whip up pizza on the spot before your very eyes! 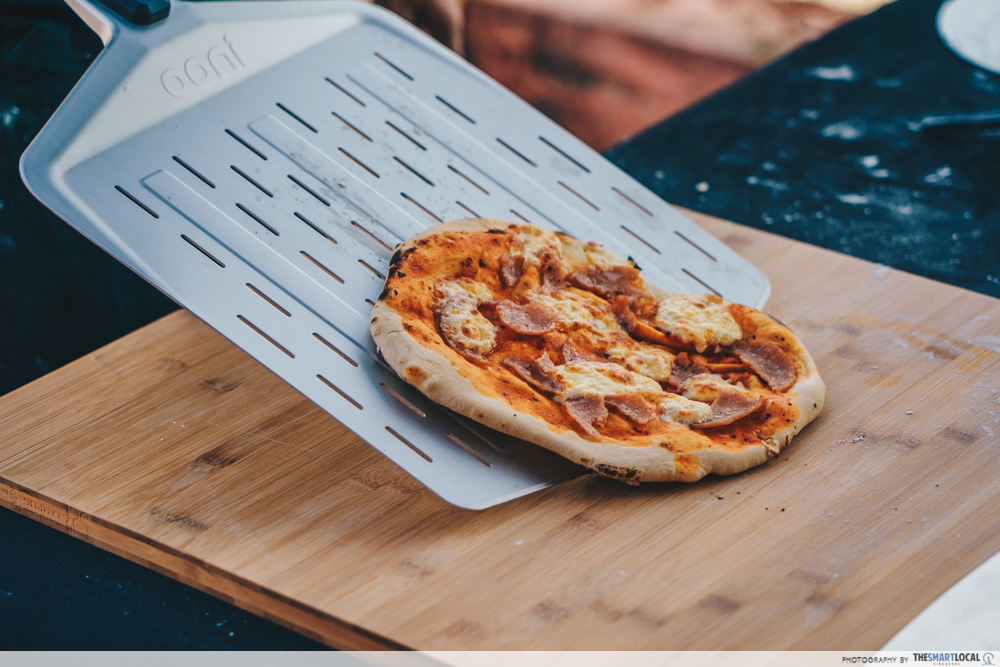 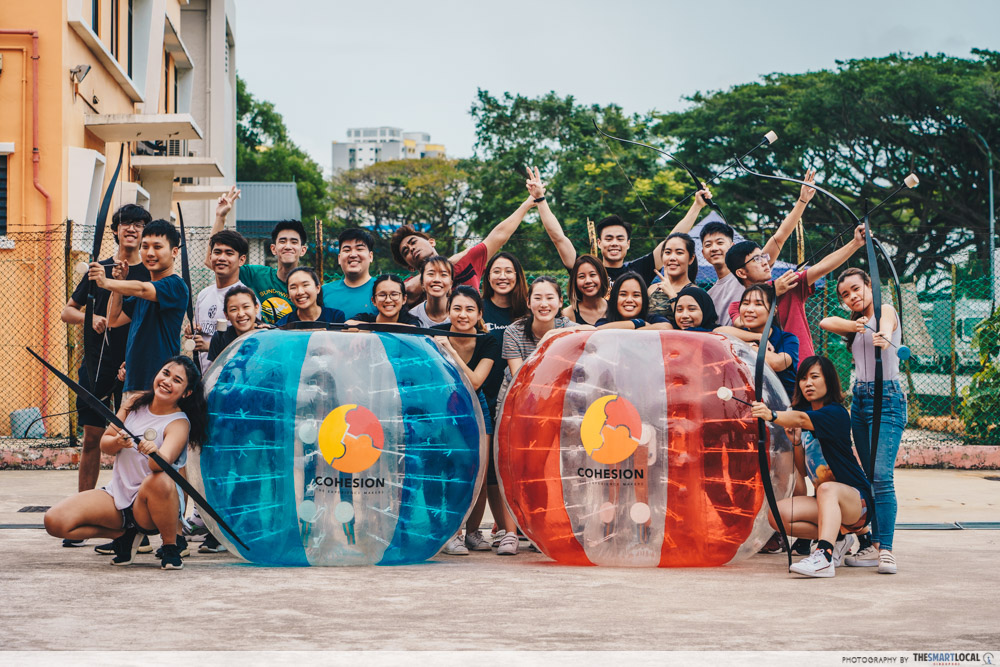 Other than checking off “working out” from your new year’s resolutions, you’ll get to enjoy a line-up of exciting team activities and games organised by CohesionSG with your officemates this year. 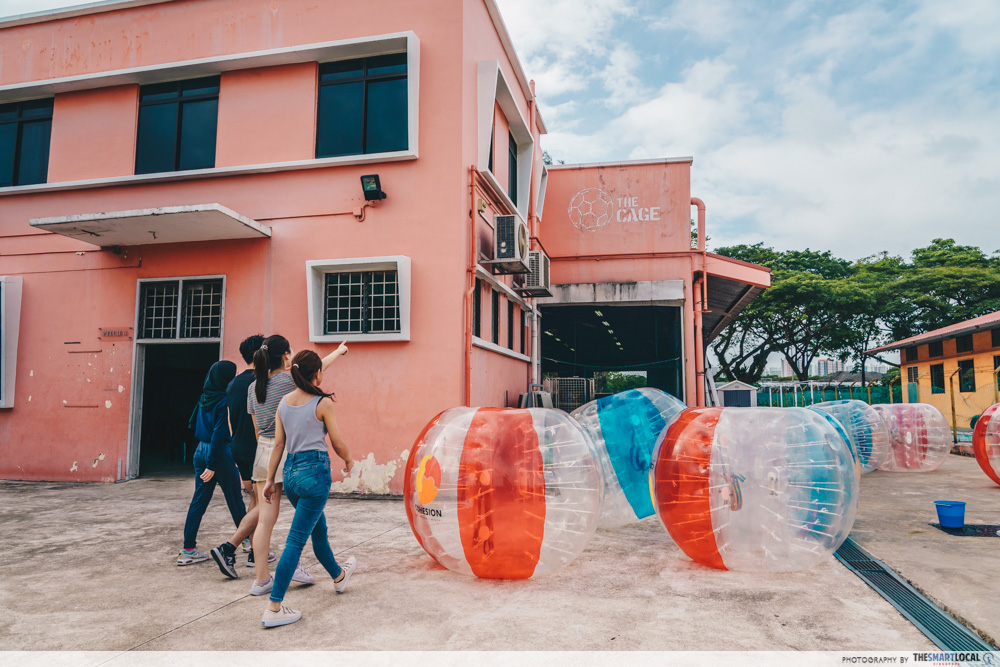 All games are conveniently packed into 1 location at The Cage

Plan your next fun day out by signing up for CohesionSG’s Bundleque Package ($60/pax) to enjoy 2 action-packed games from the list of Bubble Soccer, Archery Tag and Bumball. After 2 hours of sweating it out on the field with your colleagues, your team spirit is sure to be off the charts even after you head back to the office. 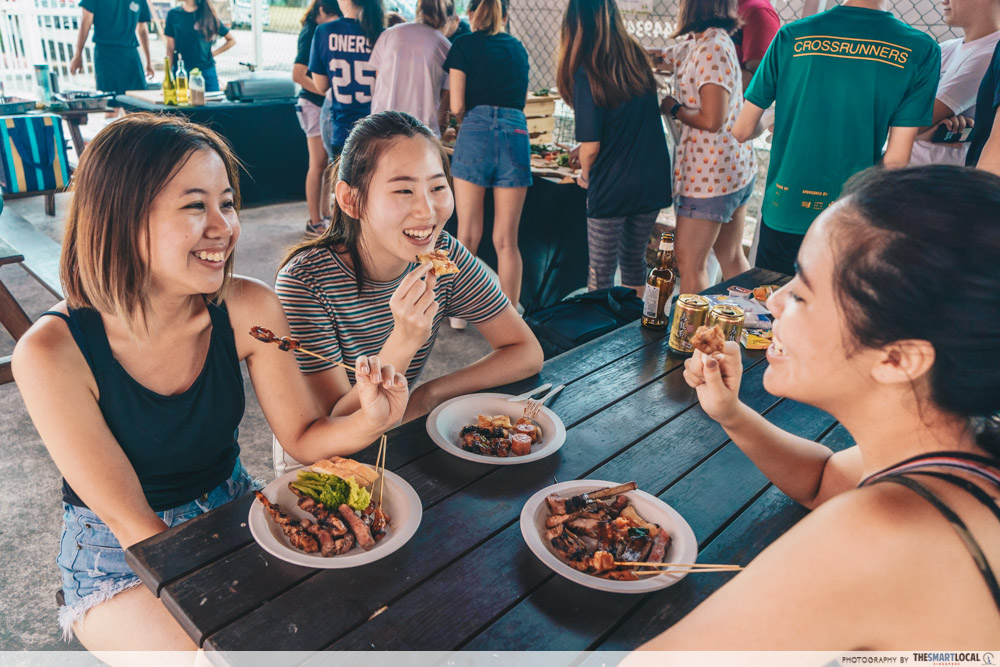 Plus, you’ll also get to feast on Sunday Roast’s 2-hour Premium BBQ, which comes with top-notch meaty selections. Best of all, you won’t have to lift a finger – except for when you’re munching down on the grilled dishes, of course.

Whether you’re stepping into the new year with old or new colleagues, CohesionSG’s line-up of unique heart-pumping games is sure to bring on a ton of laughter. Throw a relaxing Premium Omakase BBQ experience into the mix, and it just might be your office’s new go-to hangout activity!

Book your next cohesion with CohesionSG here

This post was brought to you by CohesionSG.
Photography by John Lim. 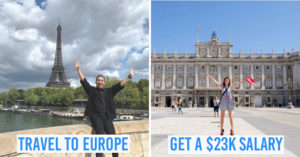 Adecco CEO Challenge 2020: How To Be A CEO For One Month With Perks Like A 5-Figure Salary & Free...
8 Quirky Chinese New Year Snacks In Singapore To Wow Your Relatives & In-Laws In... 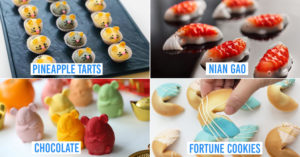