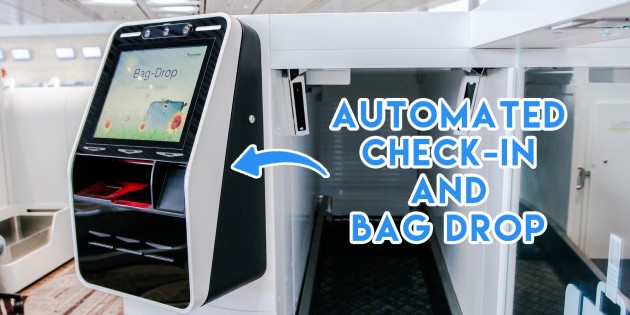 Other than our Garden City status, and ban on gum imports – if there’s one thing our little red dot is known for, it’s the fact that we’ve got the best airport in the world. It isn’t hard to see why – Changi Airport has spiffy facilities like a 4-storey high slide, a 24/7 movie theatre, and even video game consoles. Besides, which other airport has a butterfly garden?

Just when we thought things couldn’t get any better, Changi Airport recently one-upped itself by unveiling T4 – its newest and most high-tech terminal yet. We popped by for a sneak peek, and here are some of its cool features. 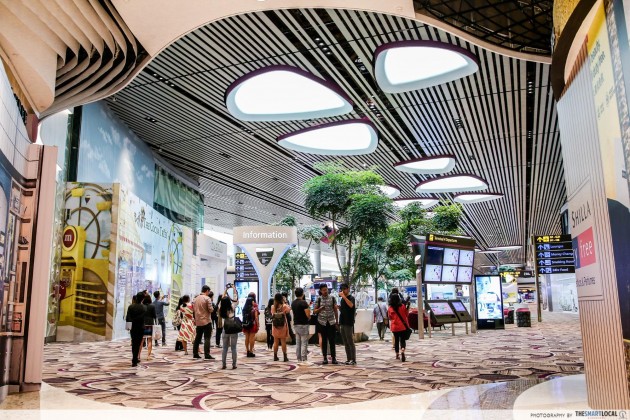 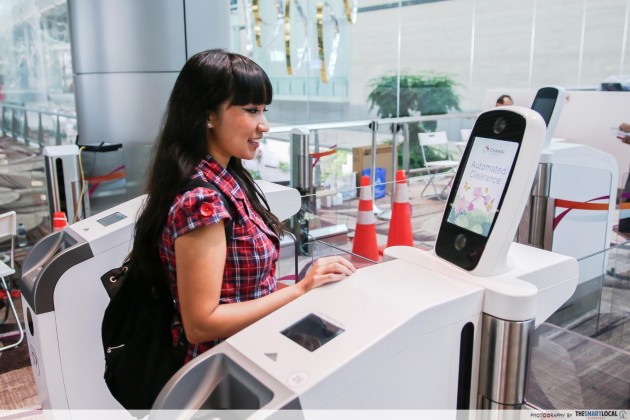 Despite our penchant for queuing hours for the latest food fads, none of us enjoy long lines when it comes to checking in for a much-needed getaway. In a Fast And Seamless Travel (FAST) initiative, T4 has been equipped with automated check-in machines to ease and speed up the departure and arrival processes. 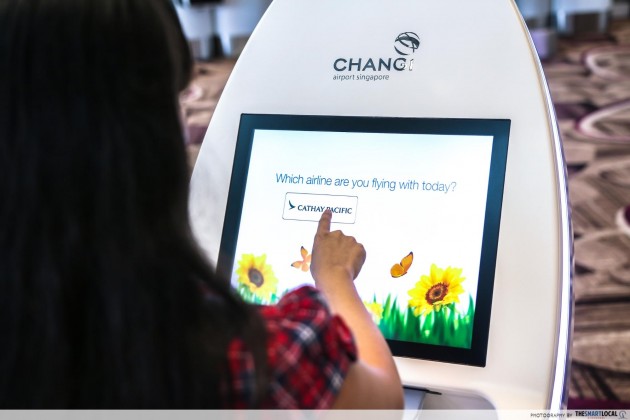 No airport staff involved – it’s just you and a touchscreen 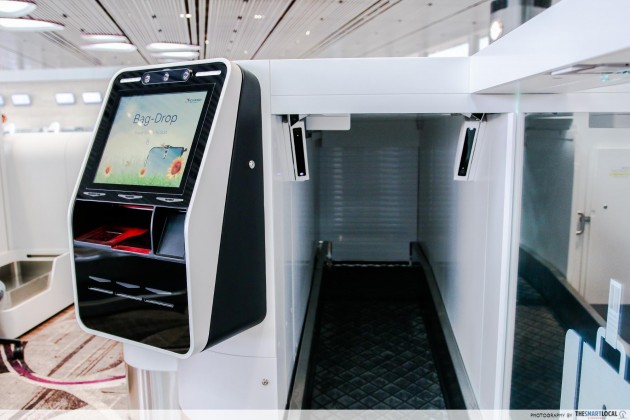 Of course, if you prefer personal service, there are also conventional check-in counters with friendly airport staff to assist you. 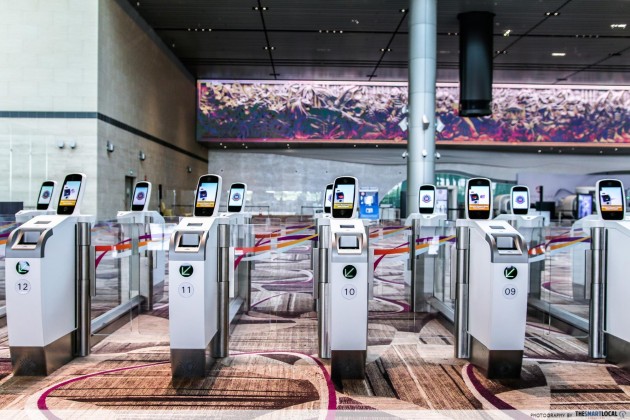 For security and verification purposes, advanced facial recognition technology ensures that the same traveller follows through the whole process from start to end – with a quick auto face scan at each barrier point.

Security checks are also speeded up – thanks to a medical-grade CT scanner, you’ll no longer have to remove your laptops and phones from your bags before putting them in separate trays to be scanned. Just dump your carry-ons into the large trays and you’re good to go. 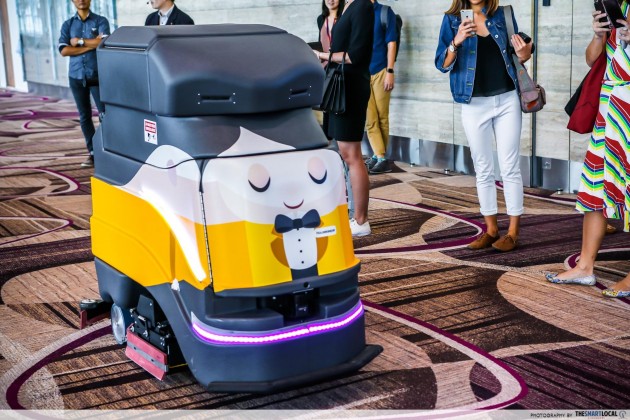 Even cleaning of the floor is automated here!

In a nod to our rich local culture, T4 boasts a row of Baroque and Rococo shophouse replicas, similar to those found in Joo Chiat and Katong. 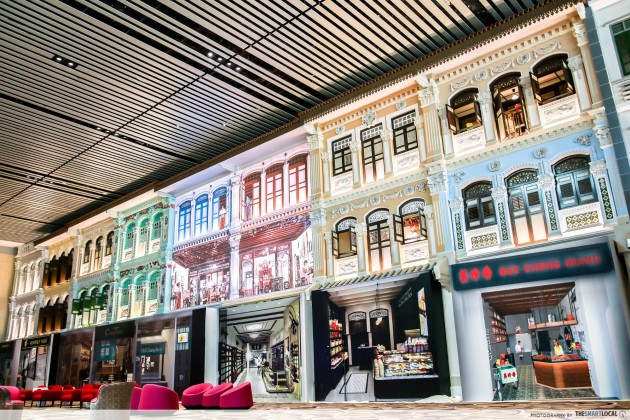 While the upper floors of these “shophouses” don’t actually have store units, they aren’t just for decoration – their facade opens up to reveal a mini digital theatre show titled Peranakan Love Story.

Though the show had zero dialogue, we were wowed by its superb cinematography and the simple yet uplifting storyline. 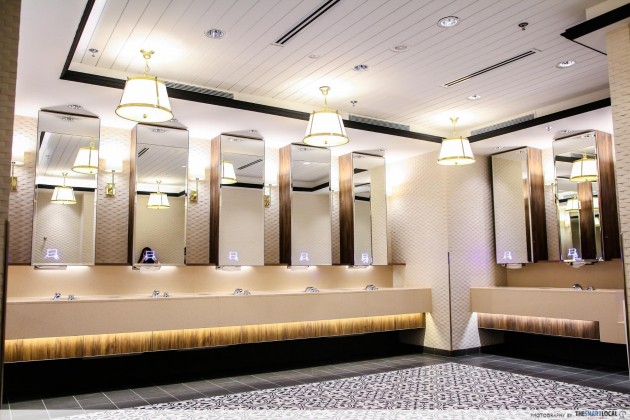 Even the toilets in the Heritage Zone bring a blast from the past, with intricate tiled floors and colonial lamps. Ah, such grandeur. 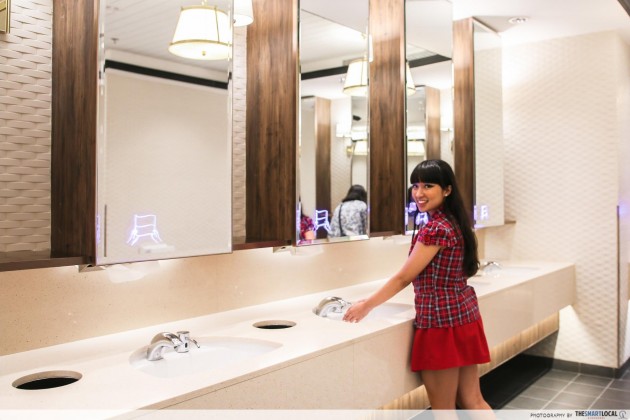 Primping yourself before a flight doesn’t get any more glamorous than this! 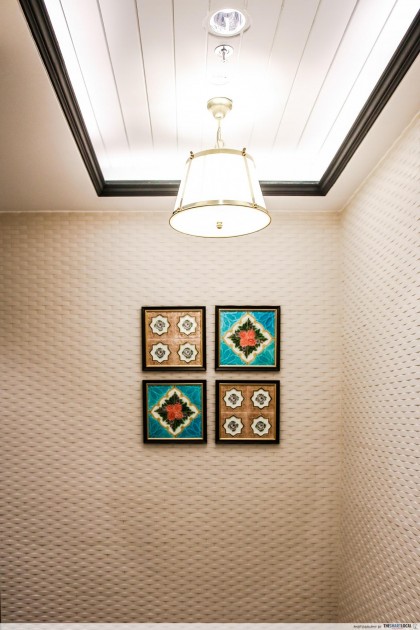 Along with the theme “fun, vibrant, and positively surprising”, T4 also houses a collection of art installations:

Inspired by orchid petals, this mesmerising kinetic sculpture is accompanied by soft calming music that can be heard throughout the terminal grounds.

To lighten the serious mood at the security scan area, this giant LED screen plays whimsical and wanderlust-inducing animations. 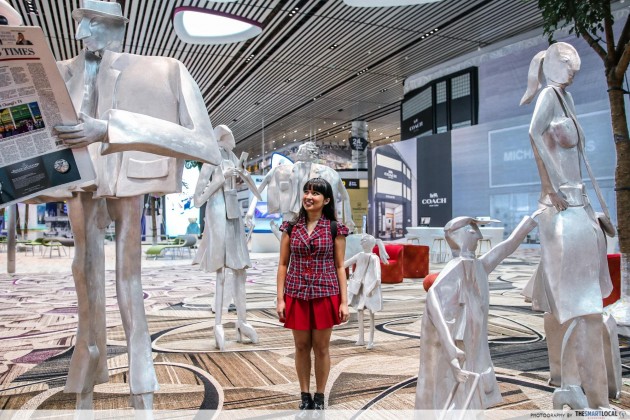 If this looks familiar to you, it’s by the same artist that created the Urban People installation that sits outside Ion Orchard. 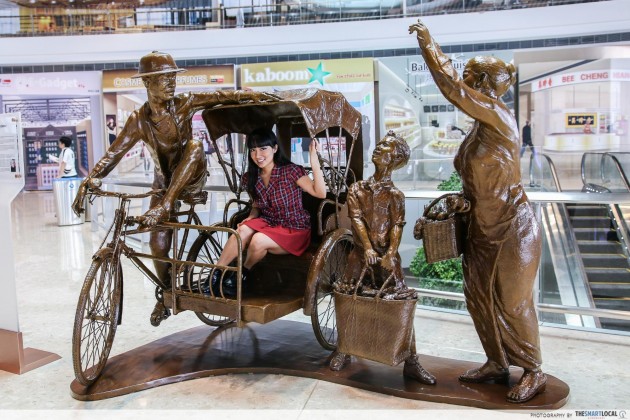 Here’s one that’ll take you back to those kampung days. Yes, you can actually sit in the trishaw! 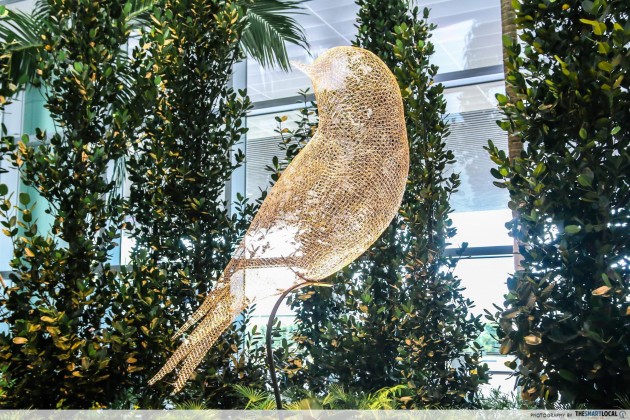 One of the 3 mesh birds of the installation, aptly representing flight and return. 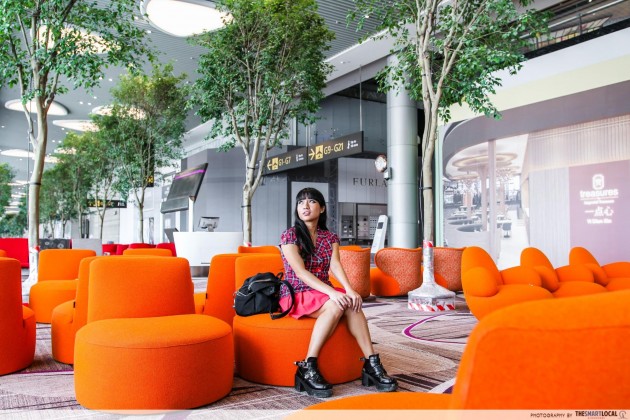 It ain’t Singapore if there ain’t greenery. Like Terminals 1-3, T4 has an abundance of plants – including real trees kept alive by an underground watering system. 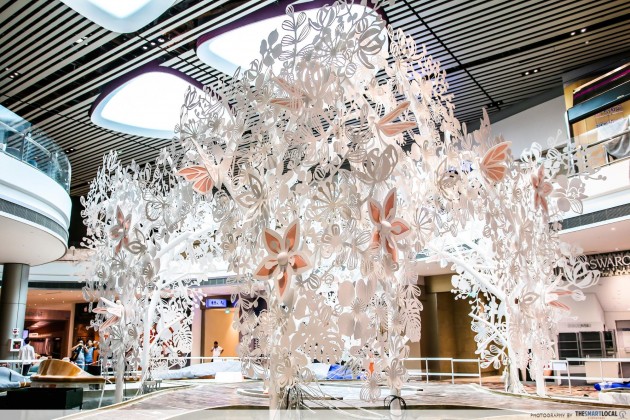 This dreamy structure will soon be fitted with air plants 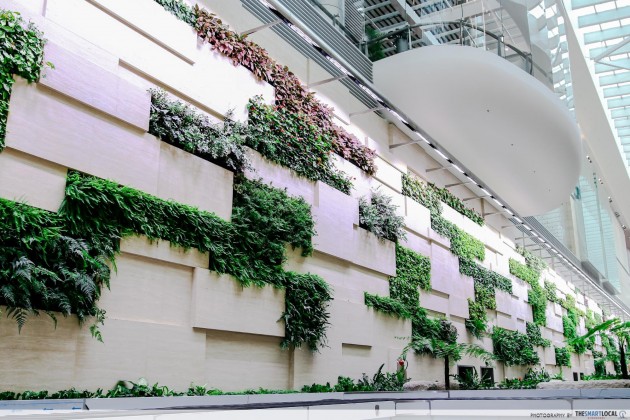 Take a rest on one of the many colourful plush chairs and admire the vegetation around you. There are loads of designs to pick from, including ergonomic ones with extra comfy backrests. 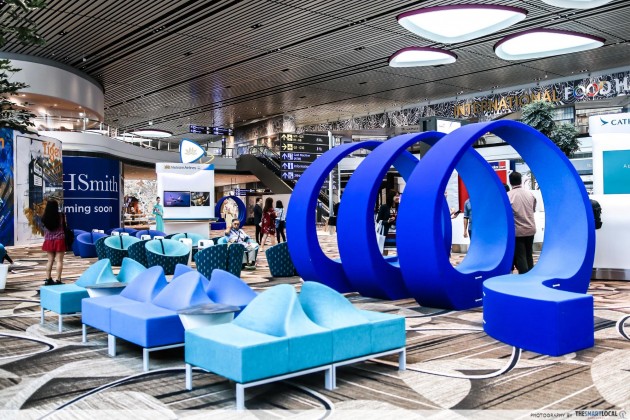 Fun fact: all of these chairs have been “bum-tested” a whopping 50,000 times to ensure durability and ultimate comfort. 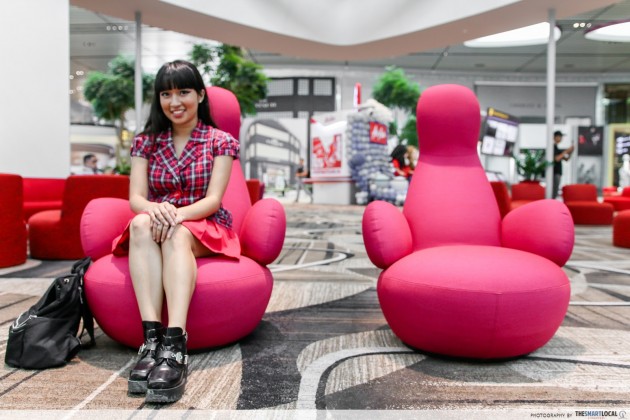 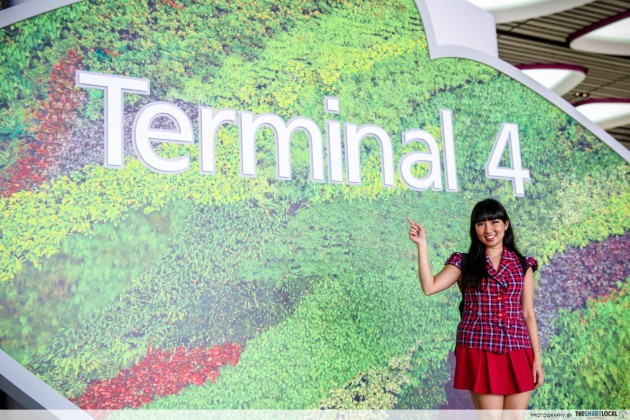 T4 might be the smallest terminal of Changi Airport, but it is definitely not one to be underestimated. For what it lacks in size, it makes up for by leaps and bounds with its amazing features and aesthetics.

Lots of us can agree that Changi Airport isn’t just an airport – it’s a national treasure, and visiting it is an experience in itself. So even if you aren’t jetting off for a vacation anytime soon, it’d be fun to head down anyway to check out this spanking new airport terminal. 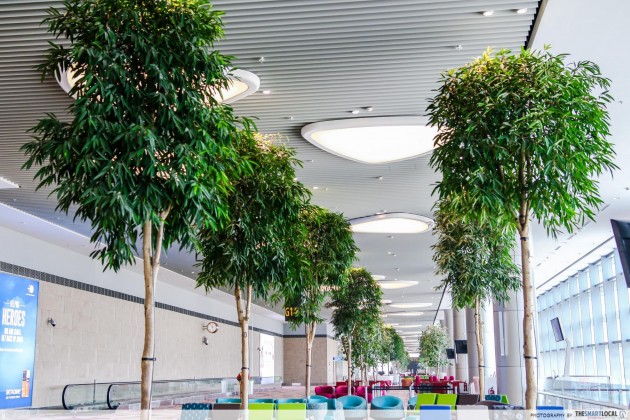 Note: T4 is not officially open yet, but is slated to start operations soon in the later part of this year. Keep your eyes peeled for more updates! 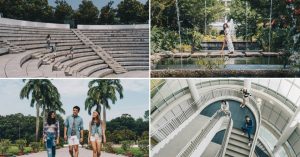