The Singapore Budget in a nutshell 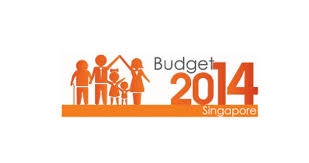 The Singapore budget is prepared yearly before the start of each financial year. It outlines the government’s planned revenue and expenditure over the year. It’s always a hot issue as most of us are tax payers looking to see what the government’s plans are for the upcoming year.

Some examples of benefits Singaporeans enjoyed in past budgets include U-Save and GST cash vouchers. Small business would have found the PIC grant (30% > 60% in 2012) very beneficial. The themes are similar throughout the years – to encourage productivity in companies, to somewhat aid healthcare and elderly and provide support to vulnerable groups.

How the Budget 2014 will affect you 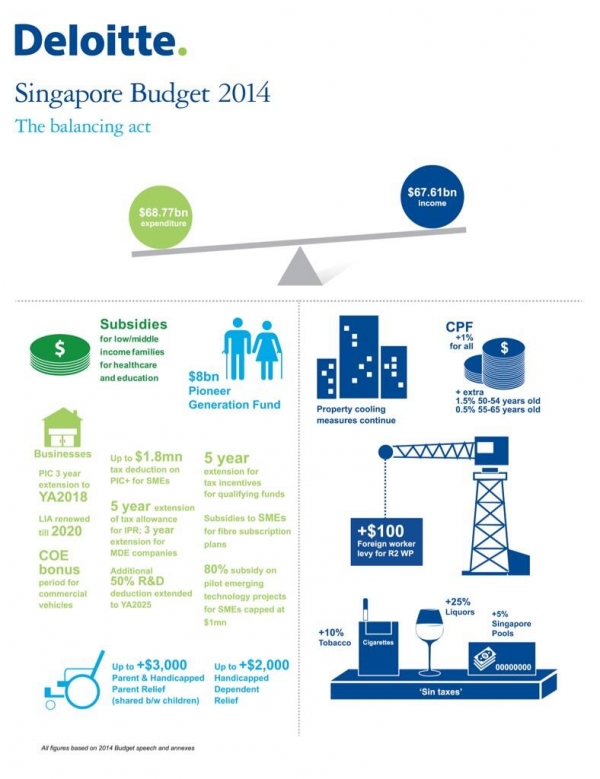 The Ministry of Finance (MOF) takes the role of gathering public consultation and a few months later the Minister of Finance makes the Budget Speech in Parliament. You can see the video in Deputy Prime Minister and Minister for Finance, Mr Tharman Shanmugaratnam’s budget speech.

We’ve went through the 1 hour and 40 min video and the various media to put together an easy to understand summary of Budget 2014. (References listed below article)

Highlights from this years budget include a strong focus on the “Pioneer Generation”. It also focuses on productivity so companies can continue to restructure and equip themselves with more technology. It has also drawn flak on social media from users commenting on the raising of tobacco tax and alcohol excise duties by 10% and 25% respectively.

The Pioneer Generation wishes to thank the smokers and drinkers of Singapore for financing their benefits. #SGBudget

The objective is to honour the contributions of the pioneer generation – the first generation of Singaporeans who were living and working in Singapore after we became independent.

If you are over 65 years old, you should qualify under this generation. They will get the benefits regardless of income, for the rest of their lives. There are about 450,000 Singaporeans who fulfil this criteria.

Some like Tan Kin Lian have argued about the arbitrary cut-off date and how it should instead apply to everyone who reaches 65. This would help more elderly in Singapore. Right now, some pioneers will receive more benefits over others who can arguably be considered pioneers too.

Regardless, this is still a good initiative as it not only directly benefits the older generation but helps lessen the financial responsibility of younger Singaporeans who would need to support their parents’ medical bills.

Increasing productivity in Singapore has always being the key because you cannot increase wages without increasing productivity growth. Otherwise companies will pass on these costs to consumers and so on and the situation will become dire. NTUC has been calling for productivity improvements for sustainable wage growth so wages can grow and workers are able to do their job easier, smarter and safer.

This is why there has always been a lot of support from the government to make firms more productive and competitive. This is actually one of the fundamental pillars behind the Progressive Wage Model (which requires workers to acquire new skills to progress) and that is why it is the preferred choice as compared to the Minimum Wage model which encourages inflation rather than productivity.

These were the key CPF contribution changes announced in Budget 2014.

NTUC’s call for an increase in employer’s CPF contribution was answered in Budget 2014.

It was mentioned in the Budget Speech that apart from technology, the Singaporean workforce should learn to change their Social Norms.

While this is good for employees, Lennon Lee from PwC had noted that “…the SMEs and local businesses who employed a significant portion of Singaporeans and PRs are bearing the costs for healthcare through a 1% increase in Employers’ CPF contributions on top of rising industrial rentals and wages due to tightening of foreign labour policy and higher foreign labour levies.”

These changes are to take immediate effect, which will generate a revenue gain of $70 million and $120 million a year respectively.

This was the most controversial issue in this year’s budget. It was stated that the tobacco increase was to discourage the rising trend of smoking among youths aged 18 – 29 years. Now I am not a smoker or drinker but I find this ruling meant to curb social ills somewhat ironic since Singapore did open up two casinos.

Other Relief for Singaporeans

Habitual drinkers and smokers will not be too happy to learn they now have to pay 25% more when businesses pass down their costs from the increased taxes to them. It’s also worth noting this tax revision has taken effect immediately, while mostly of the incentives only start kicking in during Aug to early next year.

But apart from that, the government has handed out a generous amount of incentives and subsidies across the board, strengthening our social safety net especially in the area where some people have been complaining a lot in – our elderly.

The Pioneer generation were the big winners of Budget 2014.