Books you grew up with

Before Harry Potter and Twilight exploded into our lives, there were titles like The Hardy Boys, Enid Blyton and Lao Fu Zi. Their storylines were simple – no vampires or plot-twists here – just plain, straightforward storytelling of heroes saving the day.

Whether you were getting bruised knees playing void-deck soccer or hiding in the air-conditioned sanctuary of the school library, here are a few titles that will bring you straight back to your childhood. 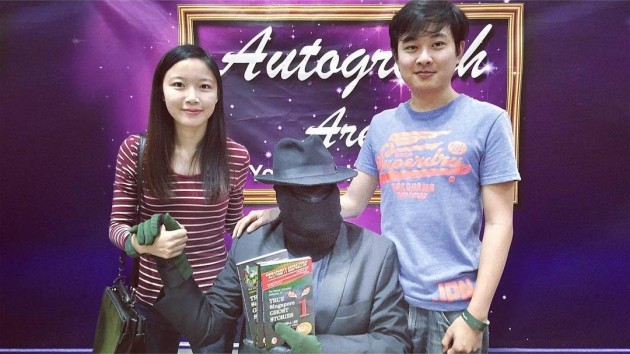 If you have ever avoided stepping on street-side incense offerings or apologized to the Banana Trees in Tekong, you were probably a one-time reader of Russell Lee’s True Singaporean Ghost Stories.

Suicidal lovers coming back to haunt their old flames to roadside pontianak encounters, Check. Hungry Ghost Month dos and don’ts? Check. Don’t be ashamed to admit it – at one time, Russell Lee had you cowering under your blanket, afraid to use the toilet or look into a mirror. 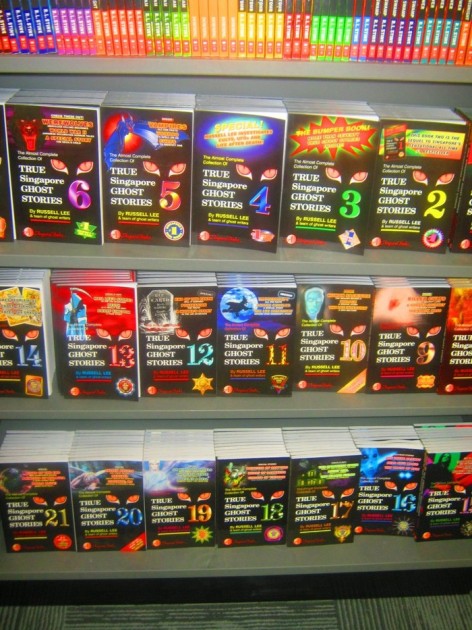 Adding to the mystique is Russell himself, who keeps his identity a secret by covering every inch of his body during public appearances. 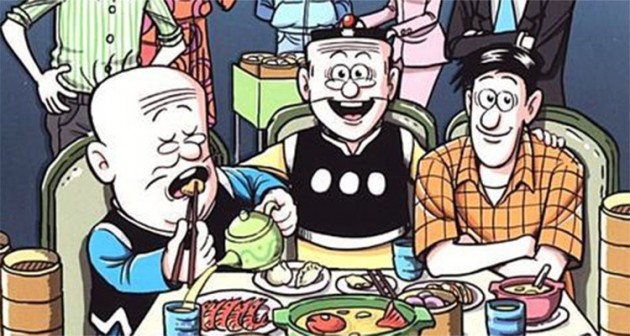 Old Master Q chronicles the life of one balding Chinese man in traditional attire, his potato-shaped sidekick and Ms. Chin, Old Master Q’s out-of-his-league girlfriend. Created by Hong Kong artist Alfonso Wong, The Old Master Q series used to be a staple of your friendly neighbourhood news vendor, before sharing their demise as everyone switched on their iPhones.

Fear not though, the entire series has now being digitized. Take your trip down memory lane at their official website, complete with Kung-fu slapstick and Kowloon-side UFO encounters.

3. Chicken Soup for the Teenage Soul 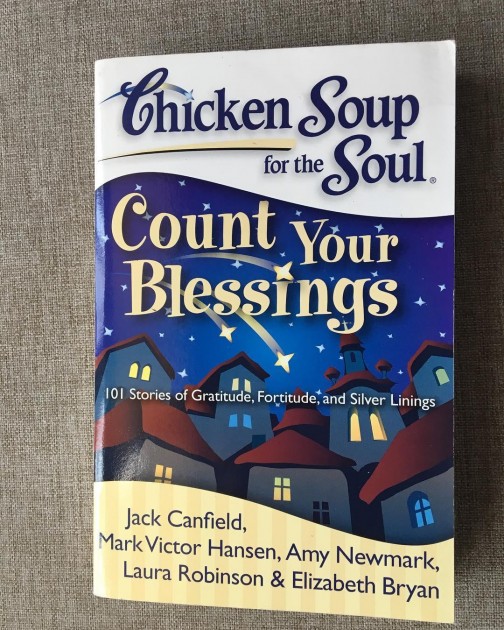 Everyone goes through a rollercoaster of emotions when growing up. It could be a first love in school, a family argument at home or even a relative’s passing. Sometimes, it’s all a bit too much for a 12 year old without perspective.

That’s where the Chicken Soup series steps in. The inspirational anecdotes and similar experiences shared by fellow teenagers remind us that what we’re experiencing is normal and everything might be okay at the end. Sometimes, everyone needs a hug, a knowing friend and a cup of chicken soup to keep the fire going.

Where to find it: Popular Bookstore
Price: $23 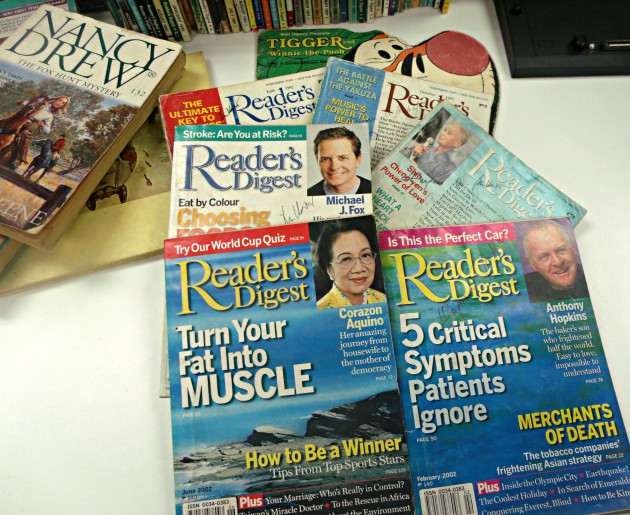 Your school definitely tried to get you subscribe to this. What we all did though, was to flip straight to the jokes section to laugh about the priest, the rabbi, and the blind man walking into a bar.

Jokes aside, you probably need to thank the editors of Reader’s Digest for being able to read this article. For many kids like me, the articles inside was our first meeting with proper, longform journalism. And there was no better way to introduce journalism to kids, than the harrowing tale of a Bear-attack survivor, or the discovery of an ancient ruin in Arizona. 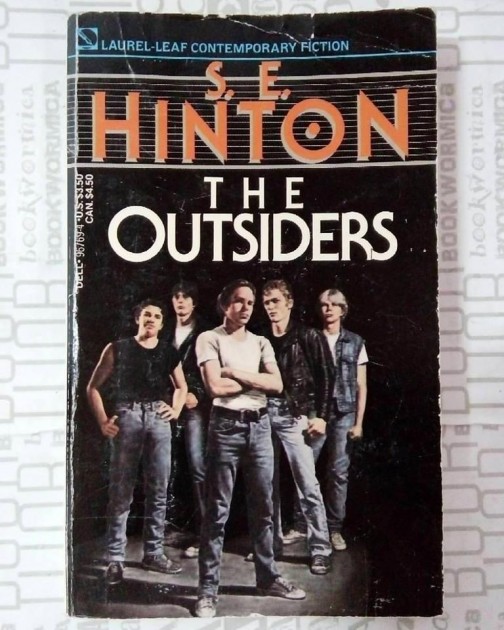 Greasers, Socs, Milkshakes, Switchblades, Drive-in Movies, Paul Newman, and Ponyboy Curtis in 1960s USA. We have no idea what the folks at MOE were thinking when they put S.E. Hinton’s American gangster-tragedy on the lower secondary literature syllabus. Perhaps it’s meant to discourage us from misbehaving or joining a gang. But surely, a true secondary school rebel wouldn’t even have bothered reading this complicated text on class warfare and police brutality in Oklahoma – especially when they could have just copied their answer from me. 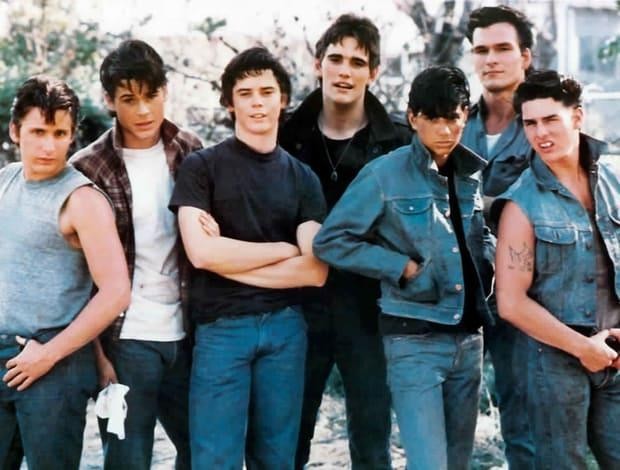 If you can’t be bothered to read the book, the movie adaptation is also very good. Not least because it features a young Tom Cruise in one of his first Hollywood roles. He’s the buck-toothed one with a dodgy bicep tattoo. 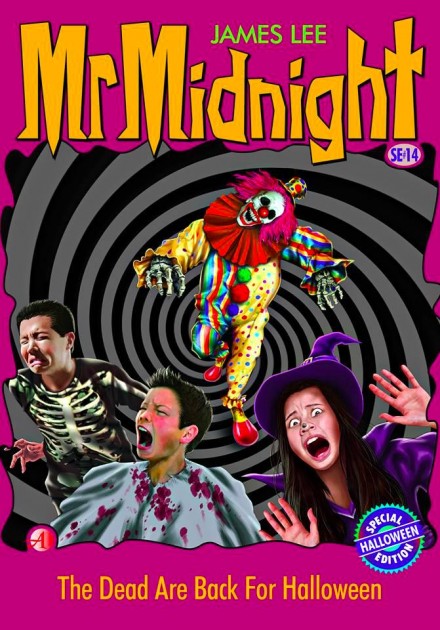 ‘Mr. Nightmare’ never quite reached the popularity of ‘True Singapore Ghost Stories’, but some readers have speculated that authors Russell Lee and James Lee are in fact the same person – especially since publisher Flame Of The Forest distributes both series. Truth or fiction? We have no idea. Like the best horror stories, belief is entirely up to the reader.

Where to find it: Popular Bookstore
Price: $6.31 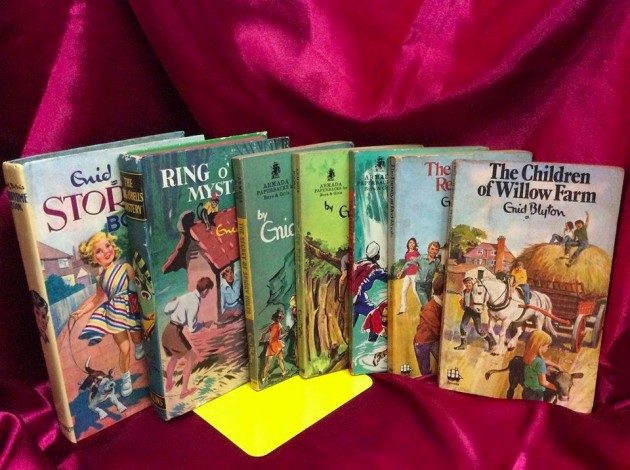 You may not remember the exact stories, but you definitely know Enid Blyton by reputation. She had a massive output of good-natured fantasy-adventure titles like “The Magic Faraway Tree” and “The Enchanted Wood”.

Her overly sweet and sappy work has not aged well though. Outside of her more famous series – like The Famous Five – 80% of her work seems to be variations on the theme of “Animal A Gets into trouble with Animal B, only to be saved by help from Animal C and/or Magic”. In today’s cynical world of gritty reboots, we certainly wouldn’t be as entertained as we were. 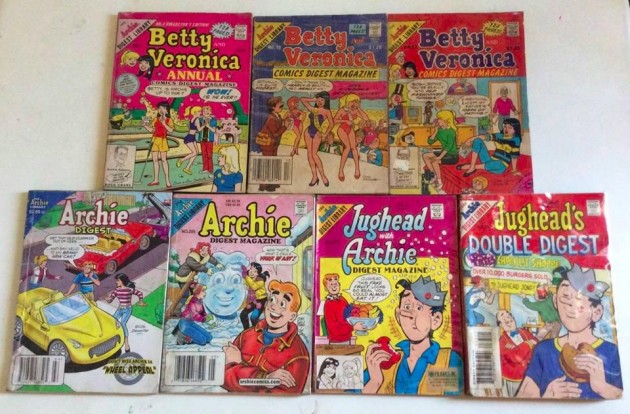 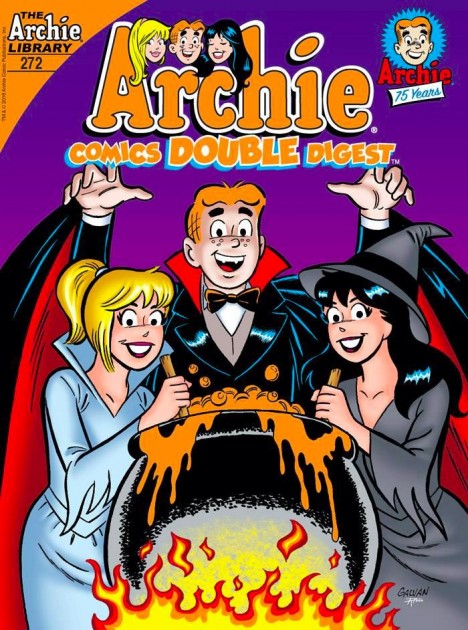 Every schoolboy and many an online journalist (read: me) secretly fancies being fought over by two hotties, but Archie’s writers keep it innocent with a 8 year old’s fantasy of what relationships look like.

Where to find it: Popular Bookstore
You can also get it from Archie Comics App, available on iOS and Android
Price: $5.95 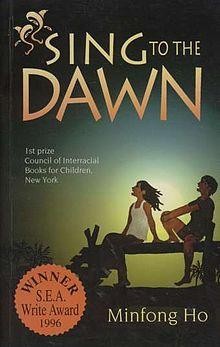 From your Sec 1 literature class, Sing to the Dawn is a simple story about the serious issue of gender inequality. Our girl Dawan wins a scholarship, but faces sexism from her brother Kwai and her own family, who believe that only boys deserve an education and life in the big city.

But then again, why does everyone consider Kwai a loser because he did not secure a scholarship? Author Ho Minfong should pen a sequel in which Kwai founds a tech startup, secures funding and gets an IPO. 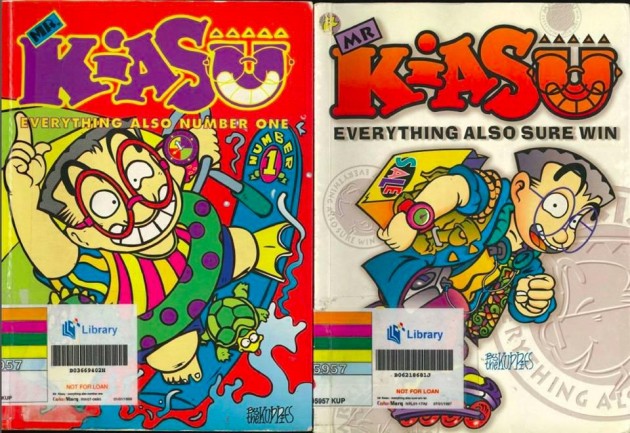 Mr. Kiasu is the brainchild of Johnny Lau, a UCLA architecture graduate who confesses to being far from kiasu in real life.

At the height of his popularity, Mr. Kiasu was everywhere, appearing on McDonald’s toys and even featuring its own Channel 5 adaptation starring Chew Chor Meng in the lead role. These days though, it seems to have completely vanished from bookshops and libraries. Which is quite a shame, because we are now old enough to truly understand Mr. Kiasu’s troubles: company project deadlines, ICT and morning traffic jams. 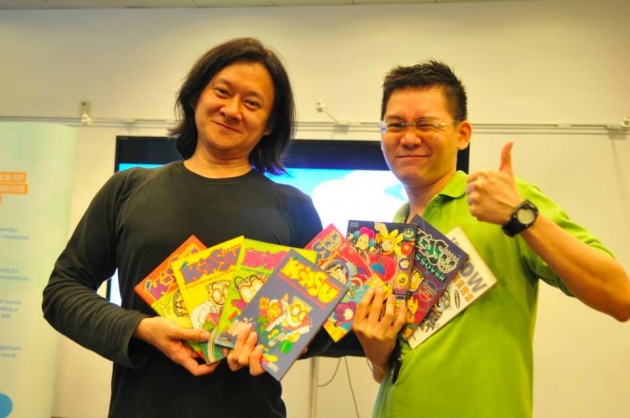 Where to find it: Evernew Bookstore #01 -11 Bras Basah Complex
Price: $1 for Secondhand Edition 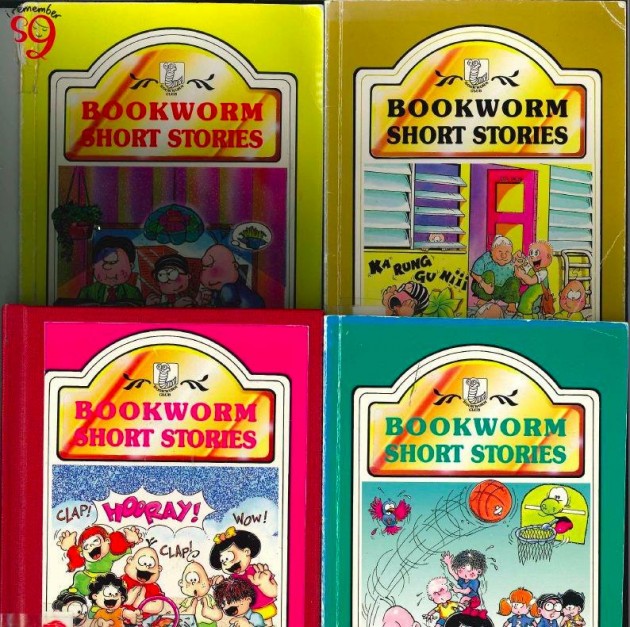 Your teacher probably suggested reading this in Primary 5 to strengthen your command of English. Little did they know that you took their advice to heart, copying the stories almost word for word into your English compositions.

If you came from a Chinese-speaking family like me, this easy-to-read series was probably a godsend. The words were simple, the sentences short and it even had helpful pictures if you accidentally lose the plot. And, each book was just short enough to keep your 6-year-old self entertained.

Where to find it: Evernew Bookstore #01 -11 Bras Basah Complex
Price: $1 for Secondhand Edition

12. The Adventures of Asterix 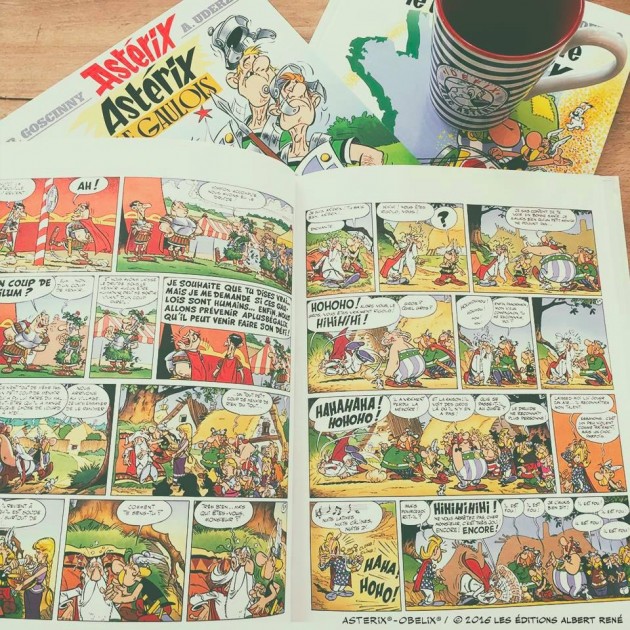 Asterix and Obelix comics were the long slim volumes that were found on the edge of every library bookshelf. If you were anything like me, you probably did not understand half of what was going on in Uderzo’s surprisingly complex world, you were just there for the beautiful illustrations. 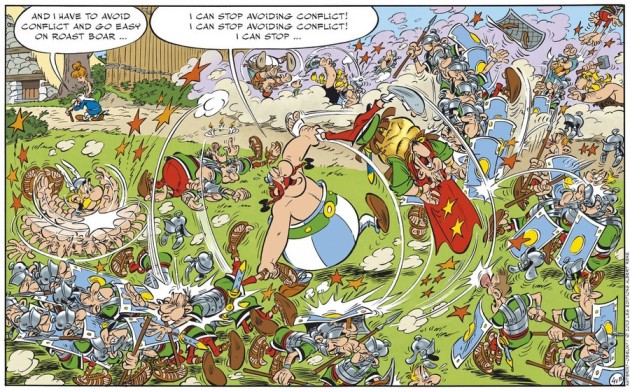 The series contained many hidden references that clearly went over our pre-pubscent heads. For example, Laudanum, the Roman garrison camp near Asterix’s village, refers to a sedative drug made by combining opium with alcohol. Asterix’s fat redheaded chief ‘Vercingetorix’ is actually a real historical figure who led the Gallic rebellion in the war against the Romans.

Where to find it: Kinokuniya, only some editions are available
Price: $16 – $32 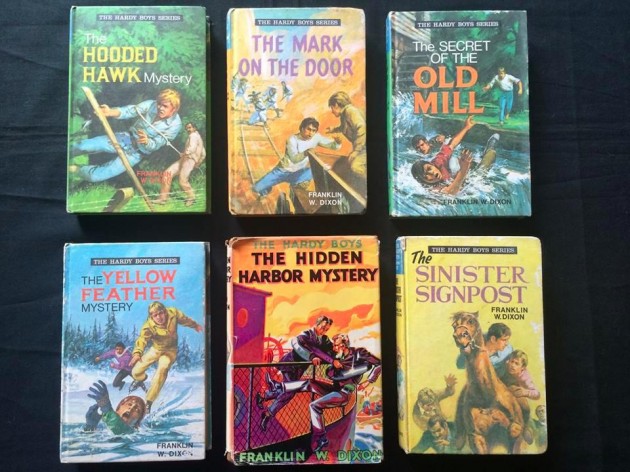 Frank and Joe Hardy are a pair of teenage detectives who frequently travel around the world solving kidnappings, finding lost treasure and breaking up every diamond smuggling syndicate from Mexico to the North Pole. They’re fearless, ingenious, and will probably enjoy long careers in CIA. Too bad those adventures got in the way of them actually graduating.

Where to find it: Evernew Bookstore #01-11 Bras Basah Complex, subject to availability
Price: $1 for second-hand editions 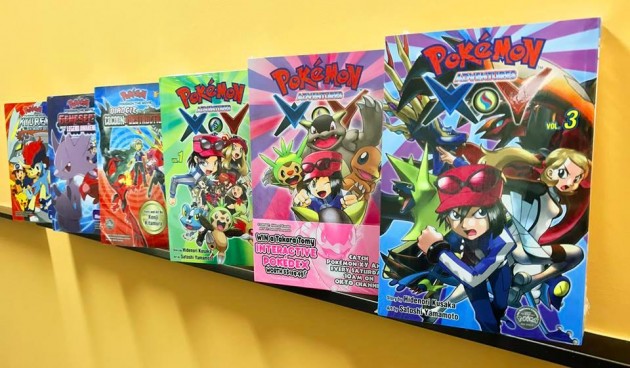 This is probably the one title on the list that you read without any coercion from teachers or fussing parents because well… because it’s Pokemon. 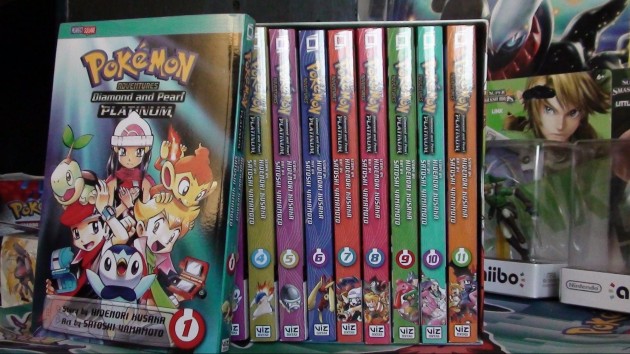 The original comic series featuring Ash, Misty and Brock was an instant sensation when first released and remained popular until we were well into our teens. In case you were wondering, during the years between the death of your Gameboy Colour and launch of Pokemon Go, the comic book series never stopped publishing. Pokemon Adventures simply moved on to feature characters and storylines from other Pokemon versions.

Books of your yesteryear

Some of these books have vanished without a trace. Others languish unsold in bookstores because they’re no longer hip enough for smartphone generation.

Whether or not they stay on our shelves, these books will always have a place in our hearts. Without some help from Enid Blyton and Mr. Midnight, neither you nor I would have made it to the end of this article.

If you miss your childhood entertainment, check out these 90s video games you can still play today. 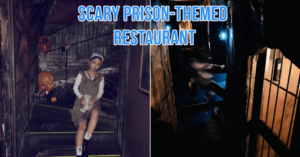