About the Master Chef – Diego Jacquet 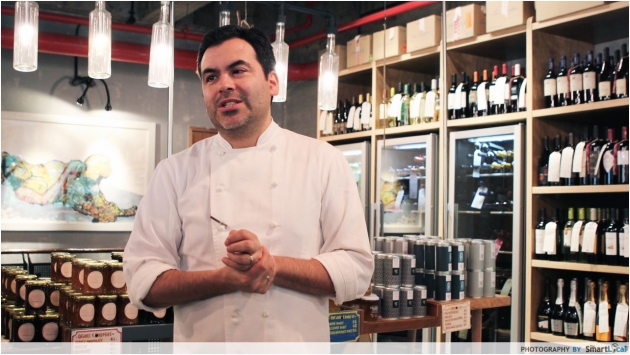 After hearing stories of my colleagues visited BoCHINche previously, I was excited to try their Argentine food for myself. This time, we had the privilege of meeting the head chef and co-owner of BoCHINche – Diego Jacquet, who was previously at prestigious restaurants like El Bulli, a Michelin 3-star restaurant, and Aquavit, a Swedish restaurant in New York.

Gaining experience and exposure in America and Spain paved a path into UK, and after a brief stint at two prestigious hotels, The Zetter Hotel and Restaurant, and as the executive chef at The Trafalgar, Diego opened two of his own restaurants in London.

Realizing there were next to no Argentine restaurants in Singapore, he decided something needed to be done and BoCHINche was born. To ensure quality, the meats used in the kitchen are all imported from Argentina and personally chosen by him.

“It’s not about business or making money. It’s a hobby. A passion.” Chef Diego Jacquet wants to share not just Argentine cuisine, but also Argentine products so people can try it for themselves at home too. From meats to condiments, chocolate, the famed caramel spread “Dulce de Leche”, and wine, there is a wide variety to choose from. The prices are reasonable, considering these are all specially imported from Argentina. 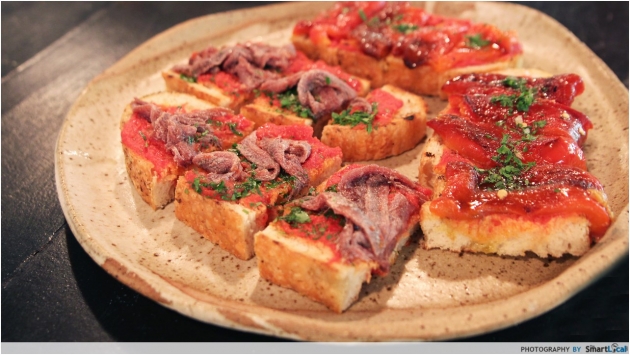 First, we had sundried tomato puree from the store spread generously on bread, topped with tuna, spanish anchovies, mushrooms, and grilled peppers respectively. My favourite was the grilled peppers, which surprised me as I’m a “carnivore” through and through.

The grilled peppers had a smoky aftertaste, and were so juicy and meaty that they tasted more like mushrooms than vegetables. The tuna and anchovies were from cans sold in the store, but they didn’t have the preserved taste that so many canned items have. 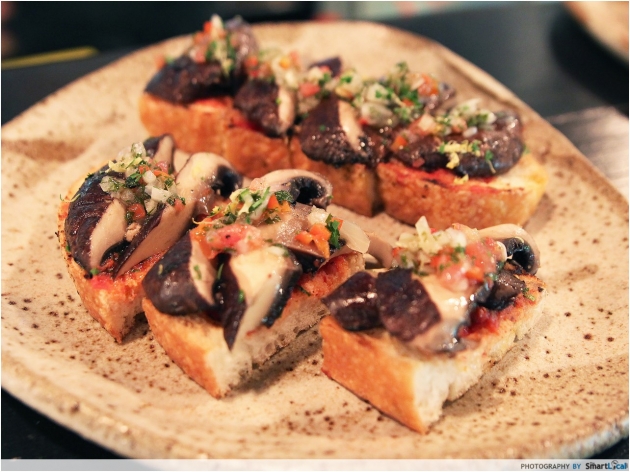 The mushrooms were roasted, and were very juicy and soft. However, while the bread dishes were alright, they were nothing amazing – I’d skip this and save my stomach space for the other items on offer! 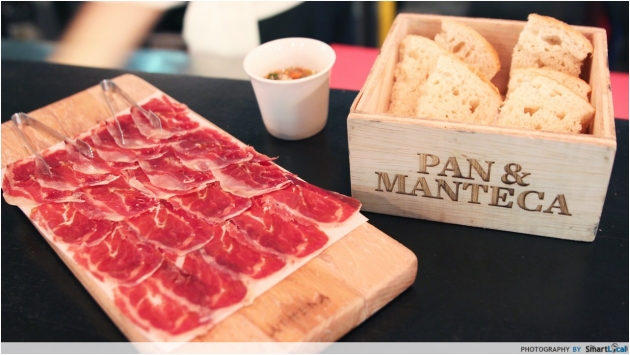 Next, we had the cold cuts – Salami Rustico and Finocchiona ($11) and different kinds of Iberico Ham, both of which go best with pickled vegetables, according to Diego.

The recipe for pickled vegetables is relatively simple:

I preferred eating the cold cuts plain though, as the pickled vegetables were too sweet for my liking. 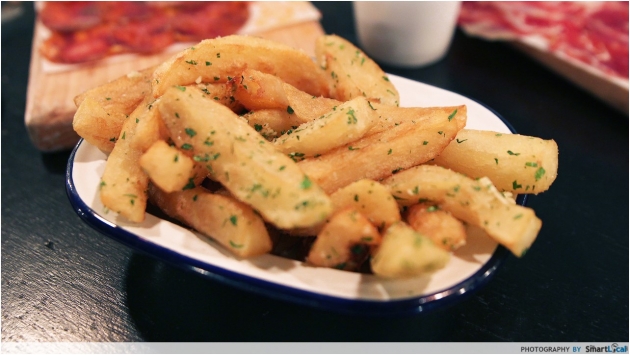 The Chips Provenzal ($10) was garlicky, crisp on the outside and soft and moist on the outside. Move over, truffle fries! Blanched in hot oil, confit-ed in animal fat, and then deep fried, it’s no wonder it’s so tasty, considering the amount of effort put into making this side dish. 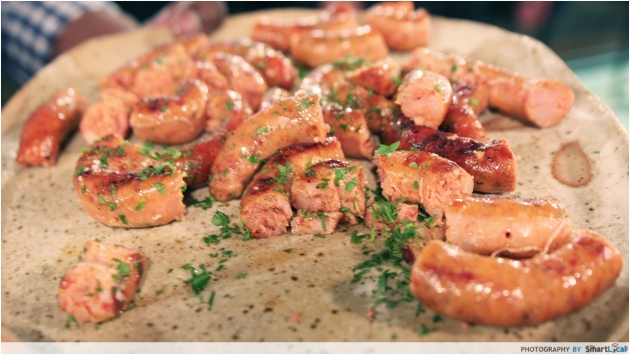 The Chorizo Sausages which were made in-house were so good, I had second servings. You can really taste the minced meat inside, instead of everything being blended together. The herbs gave the meat a distinct flavour, and it went well with the chimmichurri sauce (a traditional Argentine sauce normally eaten with grilled meats).

Chef Diego taught us how to make authentic chimmichurri sauce, but if you prefer, there are bottled ones available at the mini grocer! 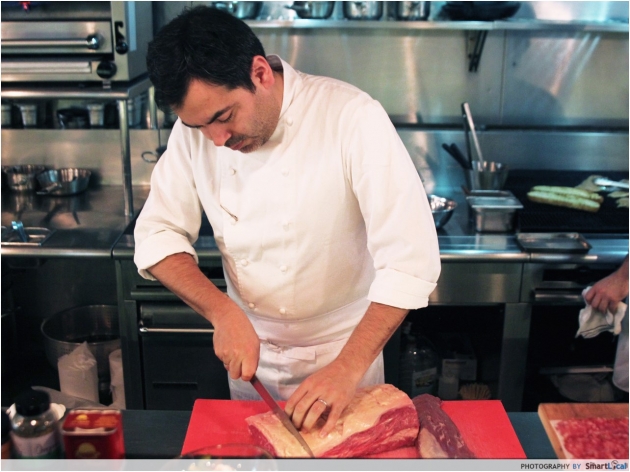 While demonstrating his cooking – with the help of two other chefs – Diego told us more about the beef we were eating, and why they cooked it in a particular way.

One reason is because the cows are grass-fed, so there are no artificial hormones or additives in the meat, but Diego says the main reason is they’re free ranging. Given unrestricted space, they can walk wherever they want and get enough exercise to be healthy and stay happy. 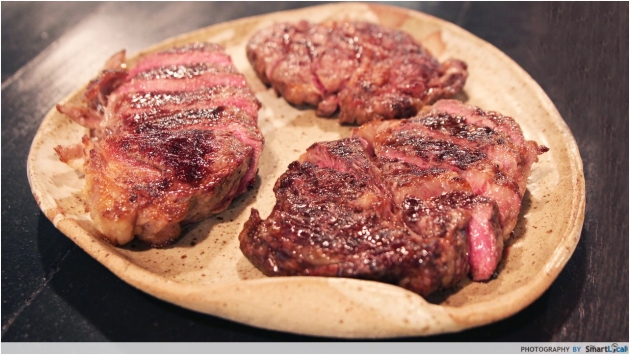 When I look at the menu, I usually just go for the signature dish, or whatever sounds the tastiest, but Diego explained more about each cut – so we could go for a more educated choice.

The rib-eye steak is the cut with the most amount of marbling, and the fat is at the centre of the meat. Since it’s at the centre so he recommends that it’s best not to order this rare. Known as Bife Ancho, 300g of Rib-eye Steak will set you back $55.

For sirloin cuts, the fat is mostly on top, so when the chefs at BoCHINche grill it, it is on a slightly sloped grill, allowing the fats to coat the rest of the meat as it melts. This Bife de Chorizo goes for $49 for 300g.

The most expensive cut on this list is the Lomo (beef fillet), which goes for $78 for 300g. With no marbling or fat on this, Chef Diego says the best way to serve this is butterfly (sliced almost completely in half and then folded). His favourite cut is not the most expensive, but one that people often overlook – the beef flank. 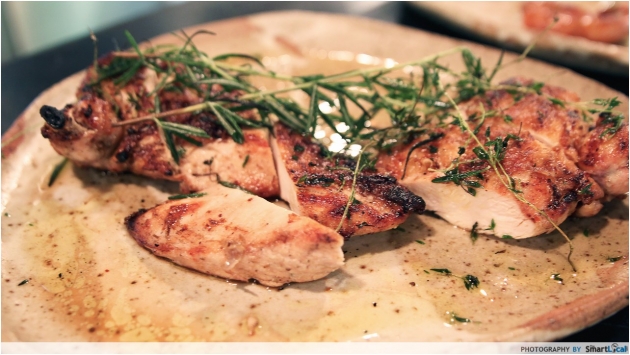 The skin of the ½ Free Range Chicken, Rosemary and Smoked Garlic ($29) was crispy, and there were subtle hints of rosemary. I learnt that the chicken is marinated for a whole 24 hours, which explains why the meat was tender, flavourful and wasn’t dry like other grilled chicken dishes I’ve had. 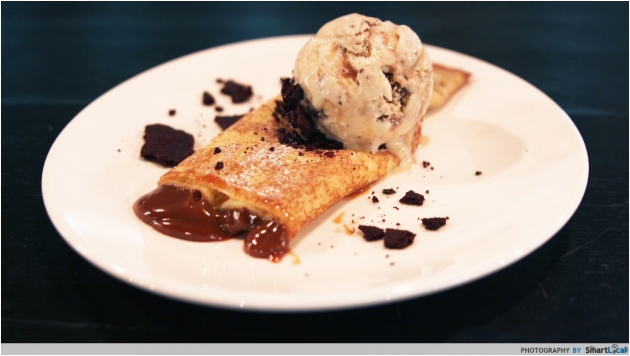 It’s sweet and gooey, and goes well with the crepes and banana split ice cream. The banana taste of the ice cream was light and not overpowering, while the chocolate crumble had a slight bitter aftertaste to offset everything else. The crepes were made in front of us, and the recipe is so easy to follow I feel like I should try it too!

The thinner the crepe is, the better.

It was an interesting experience trying Argentine cuisine and learning more about the influences behind it and ingredients used. Chef Diego Jacquet kept us entertained with anecdotes about the different items in the store, from the homemade jam to the painstakingly-sourced liquors, and of course, the caramel spread.

I liked that they labelled the wines thoroughly, like whether it was oaky, sweet, or fruity, so non-wine buffs (clueless people like me) could find wines more suited to their taste.

While leaning more towards a pricier market, BoCHINche is worth a repeat visit, with authentic Argentine cuisine and even a mini-grocer so you can try cooking the dishes at home.

How to Get There 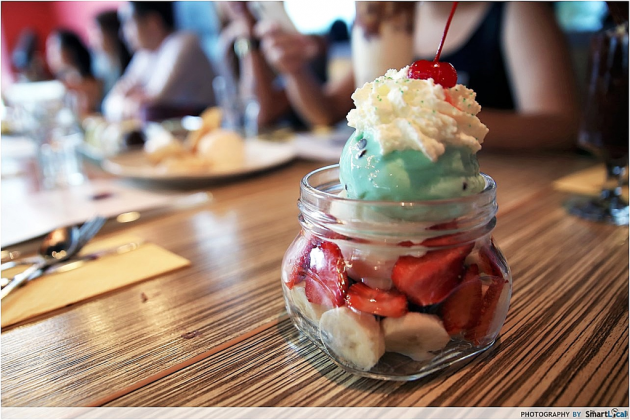 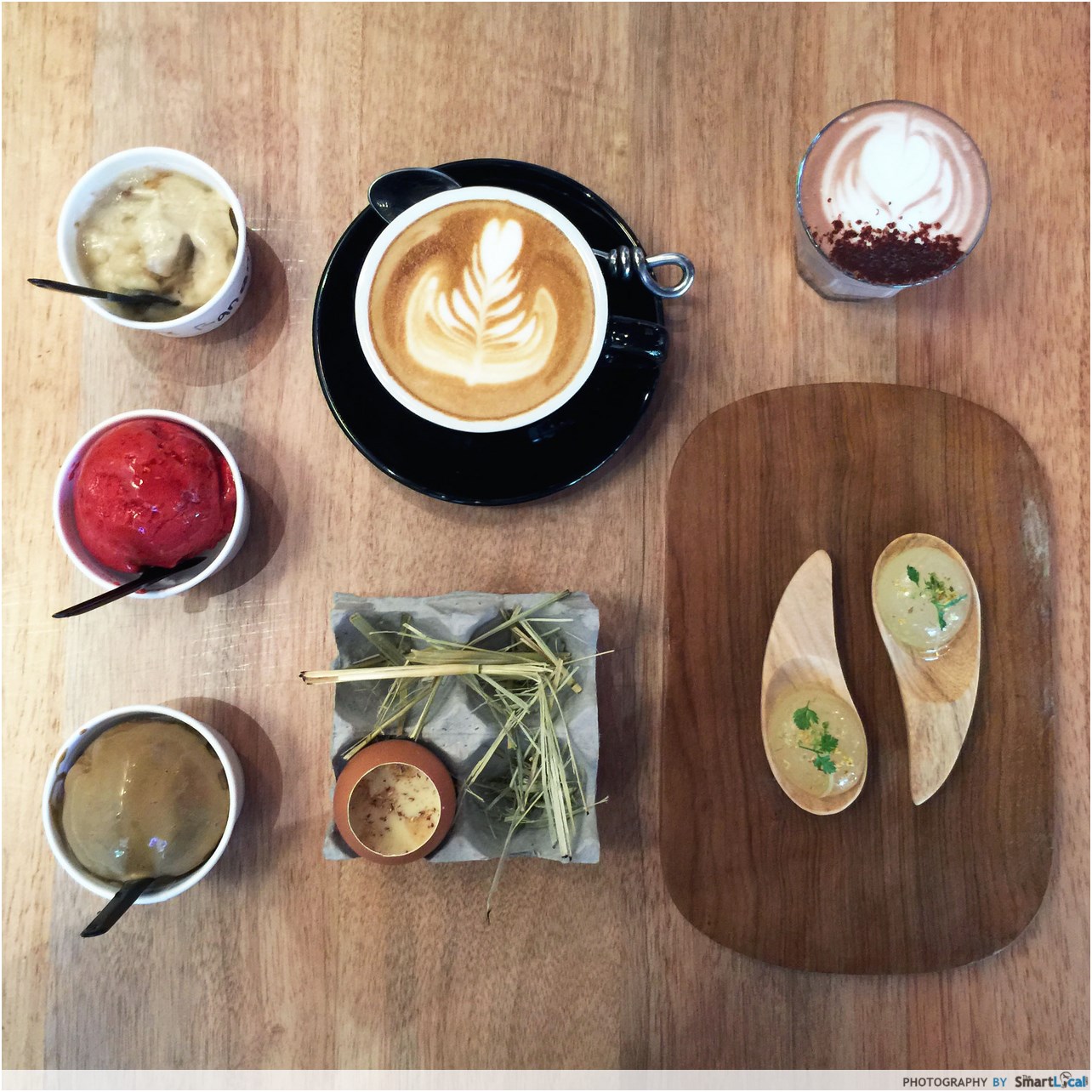