Fun fact: Singapore is a small island, but we have over 20 museums dotted across the country. They’re as diverse as the National Museum of Singapore, which documents key moments in Singapore’s history, and the Lee Kong Chian Natural History Museum, which houses real legit dinosaur bones.

But between all that, the one museum that all Singaporeans need to visit is along the Singapore River across from Boat Quay: the Asian Civilisations Museum. The ACM houses objects that help you understand the multifaceted connections and interactions between Asian cultures throughout history.

Diverse cultures, religions, and cuisine came along with the founding generation of Singapore. Having a better understanding of their origins and connections within Asia and around the world – then and now – helps us better understand our roots and what Singaporeans today are made of.

Explore the remains of an ancient shipwreck 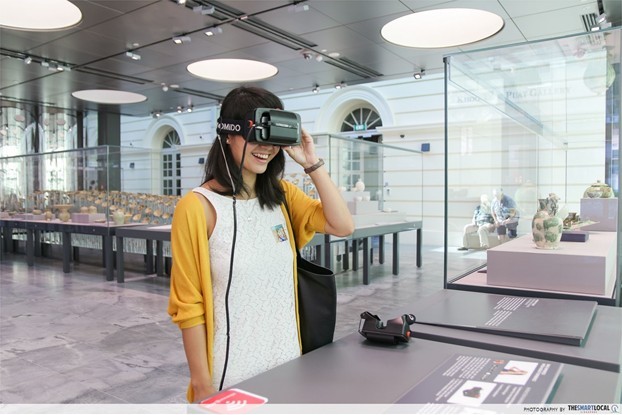 Your first stop here has to be to see the Tang shipwreck cargo. It’ll bring you more than a thousand years back, to the 9th century, when a Middle Eastern ship carrying a cargo of 60,000 pieces of Chinese ceramics, along with fabulous gold and silver objects, sunk near Belitung island in the Java Sea south of Singapore. Recovered in 1998–99, ACM is the permanent home for these Tang-dynasty treasures, including more than 53,000 mass-produced bowls from the Changsha kilns. 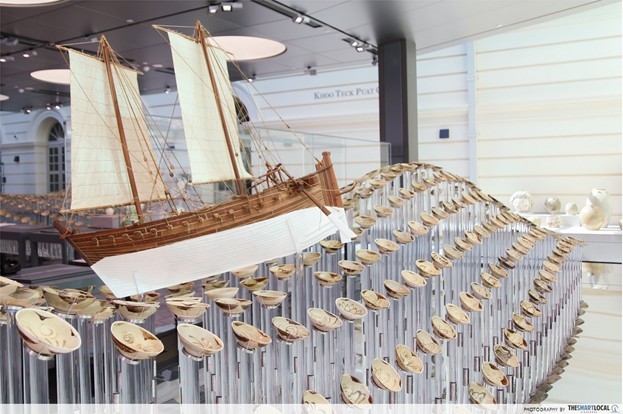 TSL Tip: I experienced life as a member of the doomed ship’s crew via ACM’s Virtual Reality App. Simply download from the AppStore or Google Play using ACM’s free wifi – right there in the gallery.

Discover how Christianity has evolved through Asian art 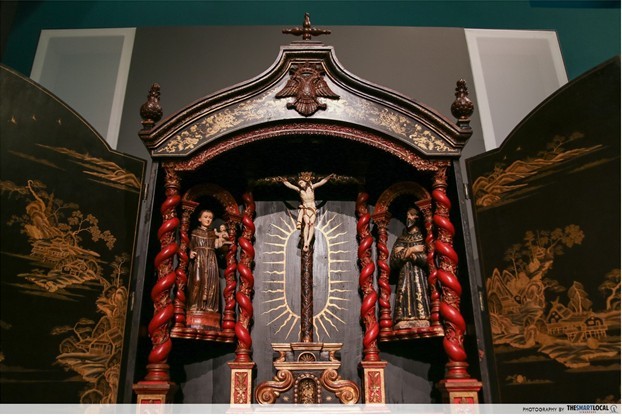 From now till 11 September, ACM presents Christianity in Asia: Sacred Art and Visual Splendour, the world’s first exhibition on the history and spread of Christian art in Asia since the 7th century. ACM has curated masterpieces from the Louvre, the Bibliothèque nationale de France, and Lisbon’s National Museum of Ancient Art for this special exhibition, reflecting its close collaboration with leading museums around the world.

Beyond altars and crucifixes – there are over 150 striking works of specially curated art, some of which blur the lines between religions and cultures. Take the Virgin and Child for example, you would never expect to see them amalgamated with the Buddhist Guanyin like this: 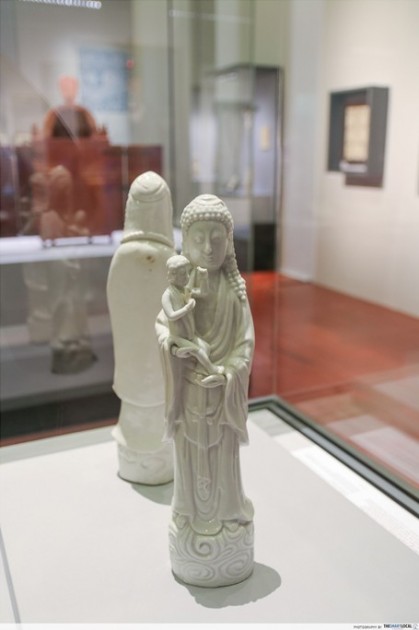 The exhibition will show how different local groups adapted Christianity into their lives, making it more acceptable within their communities. Hindu, Muslim, Buddhist, and Confucianist artists all created objects of Christian art, and some curious non-Christians even collected it. 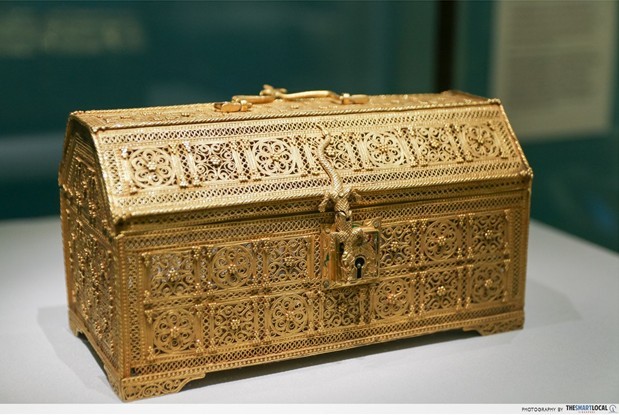 While this exhibition is ticketed, everyone can visit for free from 6-10 August 2016. Be sure to check it out and take part in their contest to win a pair of Air France return economy tickets to Paris or Lisbon!

Download the ACM app for info at your fingertips 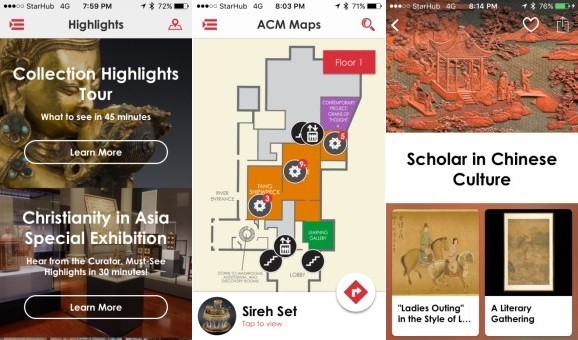 Have your own personal guide by downloading the ACM mobile app (Apple, Android). It gives you insights to objects, and brings them to life through audio tours and artistic videos. You can also use the interactive exhibition map to navigate your way from galleries showcasing Scholars in Chinese Culture to ancient Trade.

Don’t just look, listen. Tune in to soundscapes that’ll immerse you in the environment of the artwork, including light footsteps in the hall or distant bells ringing from an old church. I tried listening to my own personalised mix, and it was incredibly realistic!

Note: Please bring your own earphones for maximum enjoyment of the soundscapes.

Book now for your doodle workshop with bae 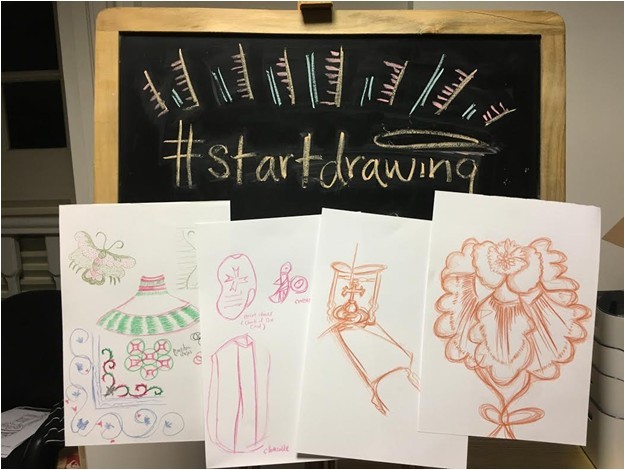 As part of the Christianity in Asia exhibition, ACM is offering doodling workshops, for free with admission to the exhibition. Sign up now, and get your creative juices flowing. You’ll never look at patterns and shapes in the same way again.

Take this chance to be inspired by artworks from the museum, and then put your own quirky twists on what you’ve just seen. If you’re lucky, your work might even be featured on ACM’s Instagram page!

Doodling workshops are held on 29 July, 26 August and 9 September. Registration is required via Peatix or at the ACM front desk.

Dress up and watch folk dances at the Love, Light, Living Festival 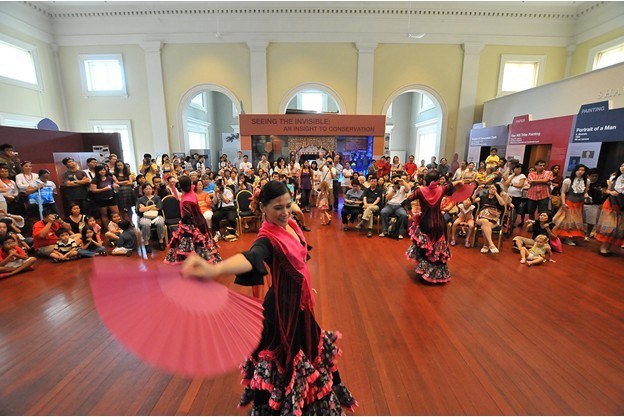 ACM brings to the public an exciting festival as part of the Christianity in Asia exhibition. It opens on 3rd and 4th September 2016 with vibrant song and dance performances. Activities such as designing your own stained-glass window, and storytelling inspired by Christian art across Asia will be eye-opening experiences that’ll immerse you in a myriad of Eastern and Western cultures.

Be sure to catch the launch of the Parol, an outdoor giant lantern in the evening on 3rd September!

Take a break and enjoy a meal along the Singapore River 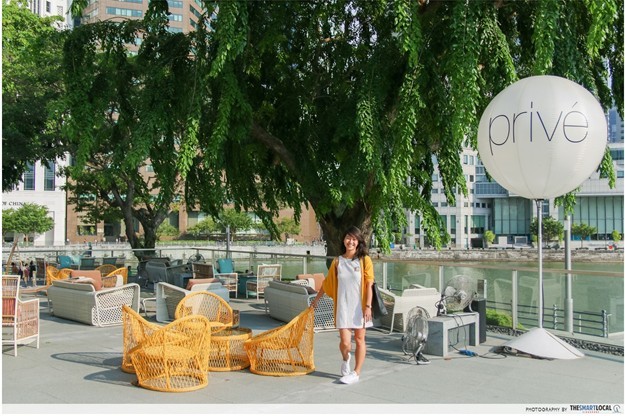 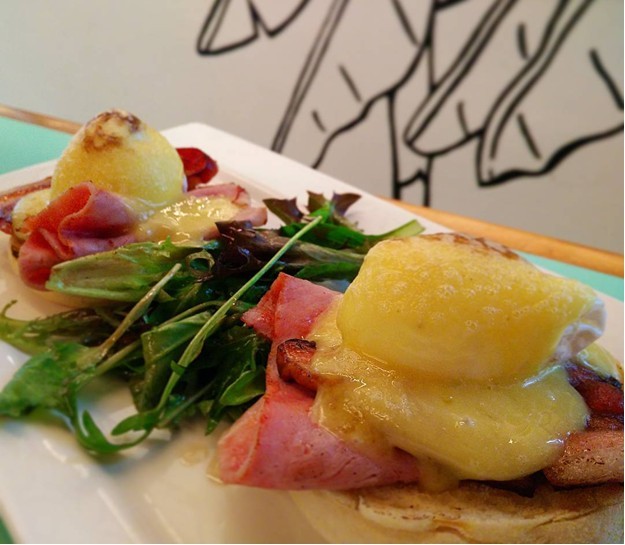 Privé has a gorgeous outlet at ACM – it’s chic and overflowing with chill vibes – perfect to spend a quiet afternoon with friends. The indoor space is decked with nostalgic rattan chairs, and the alfresco dining area overlooks the Singapore River. 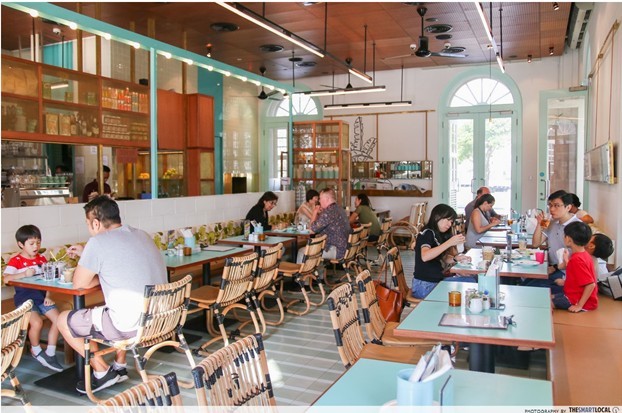 There’s a wide selection of main courses, and special teatime deals for cakes. Museum visitors get 10% off á la carte food items and drinks, so pop by the galleries and save a few bucks while you’re there!

Check out the waterfront restaurant and bar EMPRESS 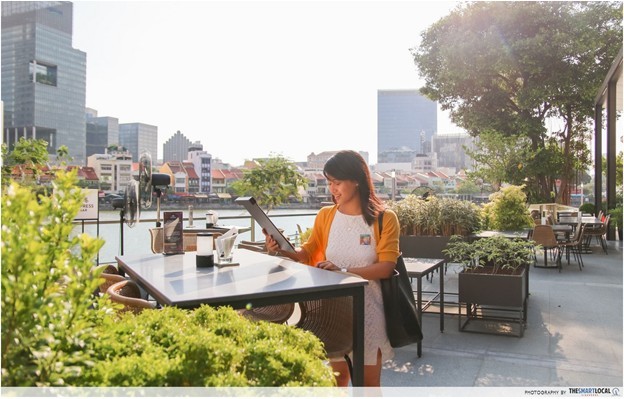 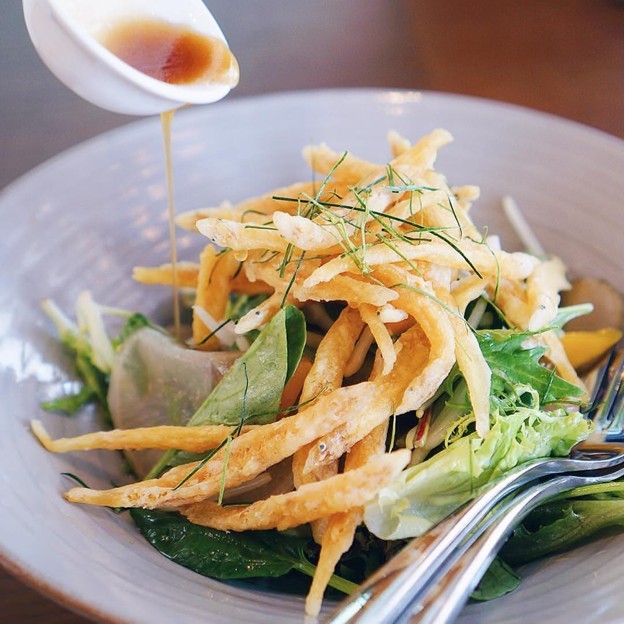 You don’t have to venture far for an intimate dinner with a view of the historic Singapore River. With the colourful Boat Quay facade as a backdrop, EMPRESS is a Chinese restaurant and bar at ACM that’s a great venue for all events from business lunches to social dinners. We hear the Wild-Caught Lobster E-Fu Noodles ($28/person) is an underrated gem, so be sure to try it if you get the chance. 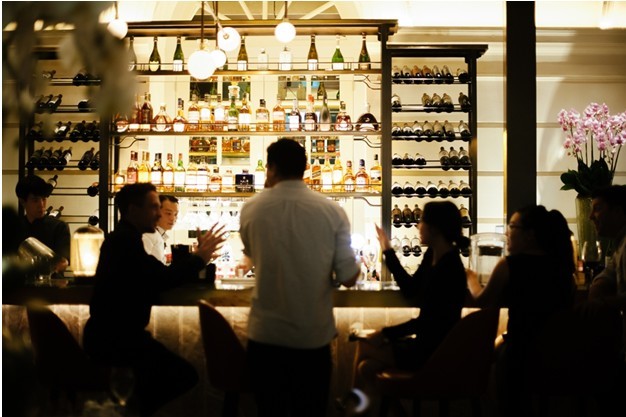 And when night falls, head over to EMPRESS Bar for Asian-inspired cocktails and bar bites! Get a party of 4-6 friends and give the Privé Super Sangria Bowl ($78) a try – you know it’s good if they included their parent company’s name in the cocktail. 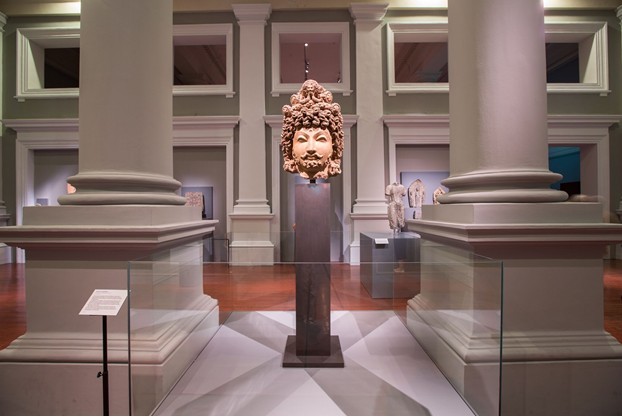 Head of a bodhisattva, Gandhara, around 4th century, in the Ancient Religions gallery

An untrained observer might accidentally skip this exhibit without a second thought, but look closer and you’ll find that the face and curly hair of this big head of a bodhisattva show hints of Greco-Roman features. It’s a sculpture of a Buddhist deity in the style of Western sculptures, made in the 4th century, in an area that is now part of Afghanistan. Talk about globalisation, but 1,600 years ago!

It’s easy to assume that world religions developed separately, but throughout the galleries at the ACM, you’ll discover how religions and cultures influenced each other at vital moments of history.

I was wowed by the traces of different cultures and religions mixed within one artwork. Beyond this, other stories are waiting to be uncovered within the galleries! 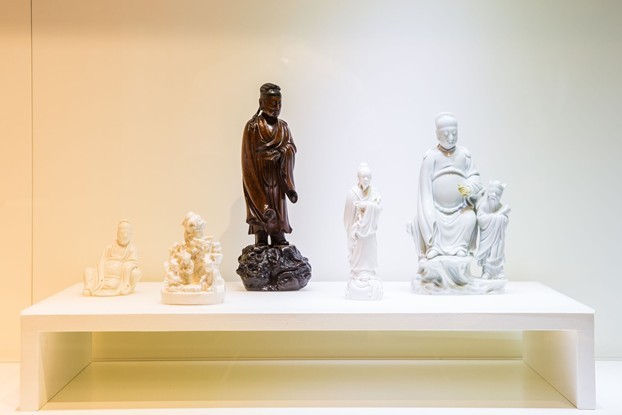 The Scholar in Chinese Culture Gallery

Wow your friends with insider stories from daily guided tours 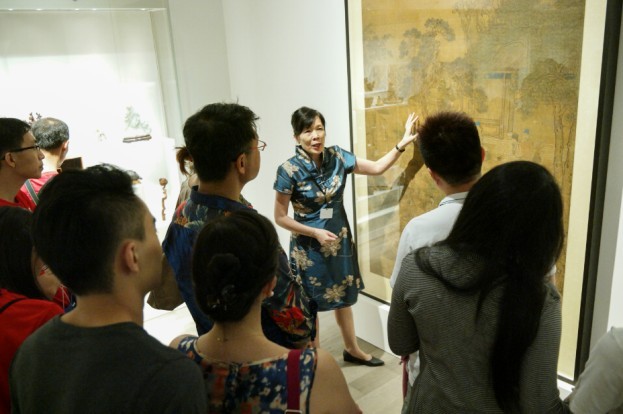 If you’re impressed with what you’ve seen at the ACM, level up your knowledge by joining one of their daily free guided tours. Hear insider stories of the exhibits from the friendly museum guides. Then bring your friends along the next weekend and wow them with your insights to treasures and masterpieces from Asia and around the world! 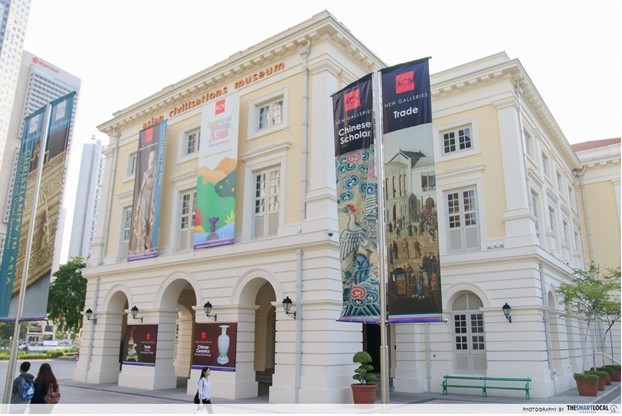 With a wide range of rare and stunning objects on display, it’s always a good time to visit the Asian Civilisations Museum. Whether you’re doing research for a school project, or are interested in learning to doodle, or just want to spend a day chilling with your friends at one of the riverfront eateries, it’s the perfect destination for anyone looking for new and interesting ways of spending an afternoon discovering hidden gems in Singapore.

General admission to the permanent galleries is free for all Singaporeans, PRs, and children up to 6-years-old. Plan your visit, bring your student card/IC for free entry to the museum.

Remember: enjoy free admission to the Christianity in Asia exhibition from 6-10 August, and 3-4 September 2016. So mark your calendar for this special treat!

This post was brought to you by Asian Civilisations Museum.