Why do Riots happen?

As we all have heard about it, a riot broke out yesterday at 9.23pm at Little India, after a fatal accident happened between a bus driver and a person at the junction of Race Course Road and Hampshire Road. It resulted in the damage of several private vehicles, 1 ambulance and 5 police cars.

Riots can occur because of several reasons which could include pent up anger and dissent or reaction to a perceived grievance. They typically result in the destruction and damage towards public property whereby cops have to be sent down to curb and settle the social unrest created by the violent mob.

Unlike our neighboring countries, Singapore has not been inflicted with as many riots as our Asian counterparts. The Little India incident has indeed shocked many after the long 44 years since a riot had occurred on our little island.

And since we are on the topic of riots, it would be good for us to have a better understanding on some of the other riots that have happened in Singapore and what we can learn from these past experiences.

The Maria Hertogh riots began on the 11 December 1950 after a court ruled and decided that a child who had been raised by a set of Muslim parents was to be returned to her biological Catholic parents. That sparked a protest from enraged Muslims which soon escalated into a riot. 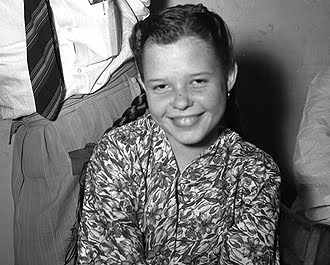 The Muslims were angry because the government threw out and rejected the appeal for the case, indicating to the large crowd who gathered outside the court that the legal system was biased against the Muslims. This was how the riot started and continued for 3 days whereby the mob attacked any Eurasians and Europeans in sight. 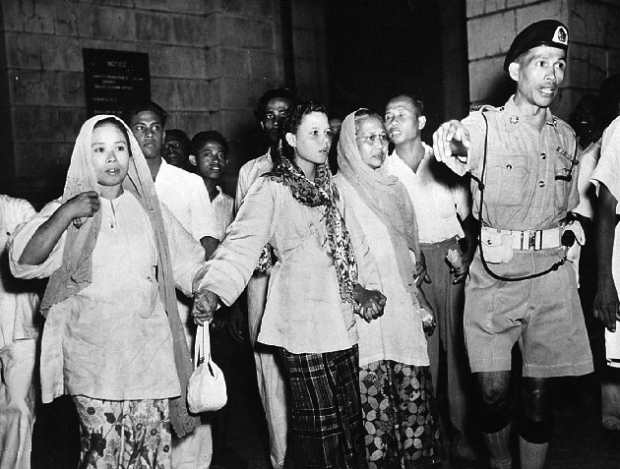 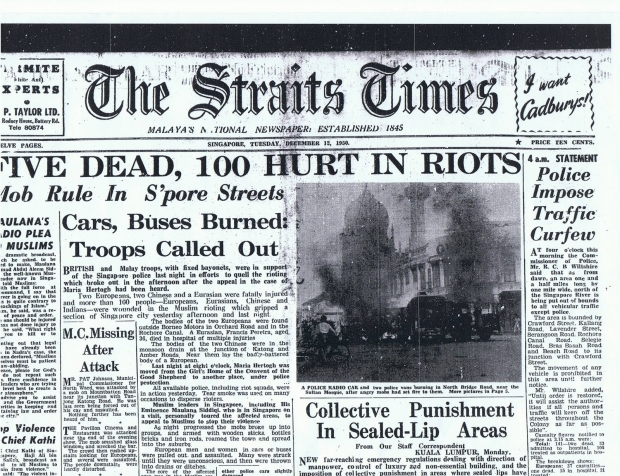 1950: The Hertoghs filed a lawsuit in the courts of Singapore, seeking to assert their parental rights over Maria.

22 Apr 1950: The court ruled that Maria should be returned to her biological parents, the Hertoghs.

28 Jul 1950: Maria was returned to Aminah after the latter appealed against the decision. Shortly after, Maria married a 22-year-old Malay teacher.

13 Nov 1950: The Hertoghs appealed the decision and the courts ruled in their favour on the basis that Maria was removed from them without their consent. Upon her return to her biological parents, the court further ruled that Maria should be subject to Dutch laws where it was illegal for minors below the age of 16 to be married.

Hence, Maria’s marriage was declared null and void and she was placed in protective custody at a Catholic convent, the Girls’ Home of the Convent of the Good Shepherd, prior to her return to the Netherlands.

11 Dec 1950: The appeal hearing for Aminah’s case was rejected by the court, sparking the riot with the awaiting crowds outside the court.

12 Dec 1950: Maria is flown to Holland with her parents to be reunited with her family.

18 people were killed, with 7 being Europeans or Eurasians, 2 police officers, 9 rioters shot by the cops, 173 injured, 119 vehicles damaged and a minimum of 2 buildings set on fire. 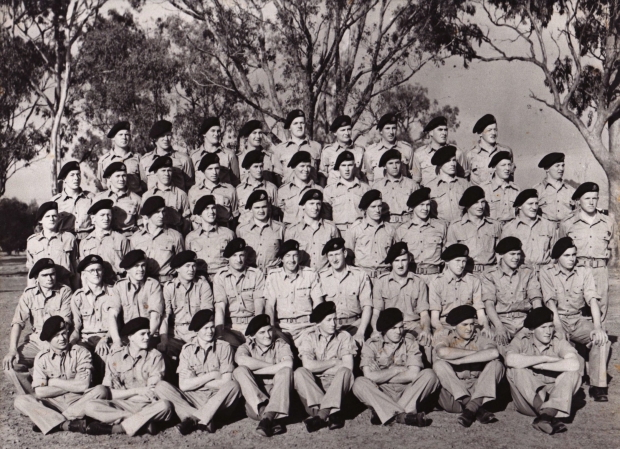 It was during this year that the British colonial government in Singapore made the announcement that all males aged 18 to 20 had to register by May 1954 to undergo the Part-time National service. Those who failed to follow would either be jailed or fined.

Thousands of students coming from Chinese secondary schools were very unwilling to defend the colonial government and hence were not present on the first day of the registration. These students, many of whom were aged 20 and above were influenced by communist ideals and on 13 May 1954, 500 students gathered in front of the government house (our Istana as of 2013) to present their petition to the governor.

The cops were called to disperse the crowd which resulted in the peaceful demonstration turning into a riot. 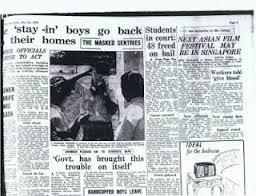 Many of us may have already heard about these bus riots, whether is it by word of mouth or if you have heard it during one of your history classes in school. It started off with a peaceful strike on the 23rd April 1955, but it soon escalated into a violent riot on the 12th of May. It only ended on the 14th of May, 2 days later when the Hock Lee Bus Strike was settled between the government and the strikers.

Basically, then workers of the Hock Lee Amalgated Bus company who were also members of the pro-communist Singapore Bus Workers Union (SBWU) went on strike due to the new work rosters and the formation of rival unions. The rival union was formed by the bus company to prevent any strikes from occurring by the SBWU. 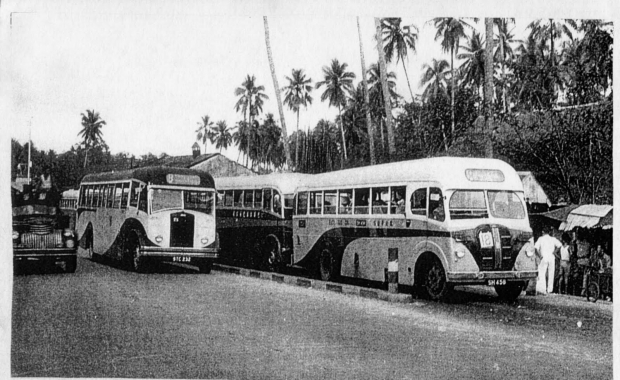 A police detective, his face and clothes smeared with burning petrol, a victim of Hock Lee bus rioters. He died later.

29 April 1955  : Thousands of Chinese middle school students converged to support the strikers with food and entertainment.

30 April 1955  : On the eve of May Day, sympathy strikes spread to other unions affiliated to the Middle Road Group. Dock workers stopped the transportation of freight and passengers, threatening the economic life-line of Singapore.

9 May 1955 : Negotiations between the bus company and the SBWU broke down and the police were ordered to take all necessary action to clear the picket-lines for the passage of buses.

10 -12 May 1955  : Rioting broke out. Twenty lorry loads of Chinese school students joined the rioting strikers and 17 more were intercepted by the police. A mob of 2,000 rioters attacked police and committed vicious acts of violence. A Chinese police officer was doused with petrol and burnt alive, while a Chinese student who was shot by the British police was paraded around for two and a half hours to whip up emotions.

14 May 1955 : A government arbitrator negotiated a settlement between the Hock Lee Bus Company and the SBWU in which the pre-strike rosters were restored. Normal bus services resumed on 16 May 1955.

4 people were killed and 31 injured

It happened after the resignation of David Marshall. Lim Yew Hock, the next Chief Minister announced that the Singapore Chinese middle School Student’ Union (SCMSSU) would be closed down because of the communist activities.

24 October 1956 – Government told parents to persuade their children to return home after many of them camped to organize meetings and demonstrations. Most of the students refused to budge. On the same day, the pro-communist leader Lim Chin Siong, held a workers’ meeting and after it ended, some of the workers joined the students in creating disorder. The government issued an ultimatum on the same day for the schools to be vacated.

26 October 1956 – Police entered the schools and forced the students out using tear gas. The students moved to the city and rioted for 3 days. 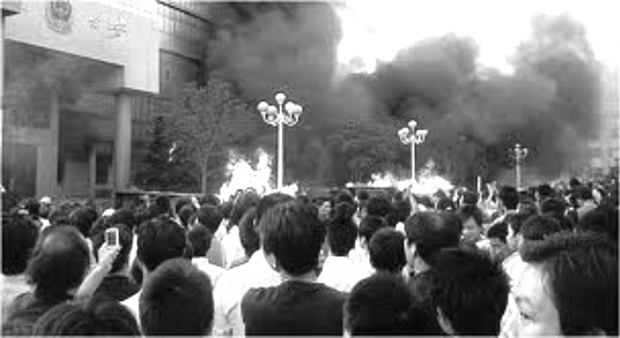 After the riot- The riot ended when the police arrested 900 people who were released in 1959 when the PAP won the 1959 general election to form the Singapore government.

The 1964 race riots took place during 2 separate periods in July and September between the Chinese and Malays in Singapore.

On the 21 July 1964, when 25000 Malays gathered at the Padang area to celebrate Muhammad’s birthday and after the speeches the procession of Malays were headed to Geylang. Along the way, a few Chinese onlookers jeered and threw items at the Malays resulting in the dispersing of a small group of Malays from the group. When the police stepped forward to ask the Malays to rejoin the procession, they were attacked by the Malays, resulting in the start of the riot which happened at around 5.00pm.

On the 3rd September, because a Malay trishaw rider was found to be killed with his attackers believed to be a group of ethnic Chinese, it resulted in the spark of the violent racial riots. 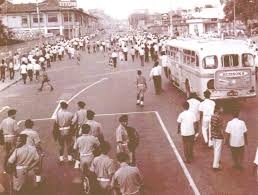 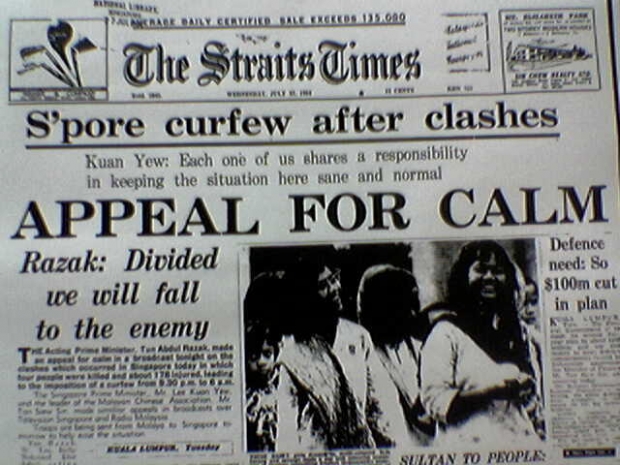 Peace is very important in a country, these riots have indoubtedly left deep marks on Singapore’s history and the people who had experienced it. It is vital that we do not let history repeat and always stay united together as a country and not let racial and religious differences cause any form of conflict or social unrest. We have to remember to always be sensitive towards each other in whatever we do or say.

“In certain situations, manifesting anger is the right attitude; in others it is not the right thing to manifest because it will only add to the violence. In the first case, anger unblocks the conflict and causes another to become more conscious. In the latter, it only adds to the unconsciousness and inflames the conflict. (73)” – Jean-Yves Leloup

“The Spiritual Dynamic between Buddhism and Christianity I object to violence because when it appears to do good, the good is only temporary; the evil it does is permanent.” – Mahatma Gandhi