The Story in 20 seconds

At 9.23pm on the 8th of December, it was reported that a foreign worker was involved in a fatal bus accident in Little India along Race Course Road. This accident sparked a riot which saw over 400 foreign nationals join in, first attacking the bus and then the emergency vehicles that responded to the situation.

An ambulance was set on fire and exploded and police cars were turned over. 3 bus loads of riot police were called in and after about one hour of reaching the scene, the situation was effectively contained with 27 arrests and limited casualties reported.

Update 2: This is a good factual presentation / recap on the gov website with no propaganda.

Update 1: A good recap by Yahoo with eyewitness accounts and a Little India resident explaining how things have being bad in Little India for a while now and how its especially unsafe at night and on Sundays.

How the Riot in Little India began

I’m not going to selectively post news like mainstream media. Instead, I’ve decided to consolidate all the credible bits of information I could find floating around social media and news channels to put together a balanced recap of the incident from both sides. Ultimately, I hope Singaporeans will feel more secure with this knowledge and be able to understand what happened and why.

This is an unfiltered citizen report with elements that the press won’t cover, inclusive of real eye witness accounts and graphic videos as they happened live from the ground.

The last riot that happened in Singapore was in 1969, making this the first riot in 44 years. Let’s hope no one else gets reported injured / killed, especially the policemen and ambulance who have been sent down to control the situation. I still can’t believe this happened in Singapore but the important question to ask ourselves is – why did this happen? 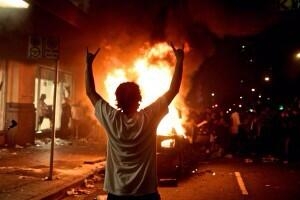 The Straits Times reported that a “worker was hit by a bus earlier and first responders were believed to be attending to the victim when the riot started.”

CNA reports the exact location where it originated was the junction of Race Course Road and Hempshire Road. Here’s a circle I drew on google maps of where it apparently originated. This is near the MRT where the restaurant Banana Leaf Apolo is located away from the main area. 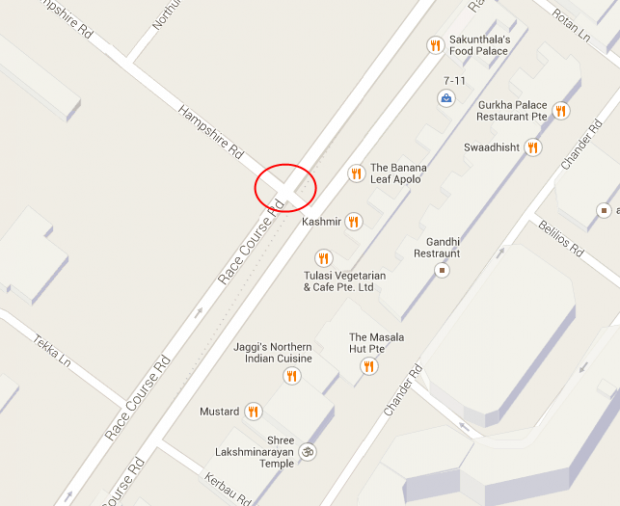 Terry from TOC who went down to the scene, reported that the tipping point was when SCDF arrived and pronounced the Indian dead on the spot. After that, the crowd started smashing windows of the bus and the violence rapidly escalated.

This is thydowager’s “first hand news from witnesses at the scene.”

“The riot was sparked off because a bus ran over an Indian (suspected foreigner), resulting in him getting stuck underneath the bus and died on the spot. The accident happened within the area where many Indians were drinking and they rushed up to see what happened…

The ambulance arrived late, hence the police officers were the first to be present. Apparently, it was understood that the police officers could be those that patrol little india on a regular basis- and they are known to be rather “nasty” and cocky towards the Indian foreign workers there (- info gathered from the Mustafa folks)

From the witness itself: “The bus accident was the reason BUT not the TRIGGER of this entire riot.” The police officers who were first sent to control the situation might have behaved aggressively towards the mob, hence causing the drunk mob to retaliate (along with their suppressed anger towards the local police)

Their anger escalated when they saw their fellow countryman… with no ambulance in sight. And yet, the police officers were still pushing them around. That’s only when they incited the mob and burnt the police cars.”

Another eyewitness account of how the incident was started by user “drgoz” on RedditSG.

The video above was originally uploaded on Facebook by Berlinda Samuel Tan and shows the bus (supposedly the same one that knocked down the worker?) being attacked. Kudos to the lone man there stopping them from doing more damage. Here is another video uploaded by @mc_blink on instagram.

The mob supposedly made up of foreign nationals attacked an ambulance and a traffic police car responding to the accident. Update: Police commissioner Ng Joo Hee has confirmed no Singaporeans were involved in the riot.

This picture below shows an ambulance being set on fire. One of the most cowardly acts I’ve seen. This is just senseless. 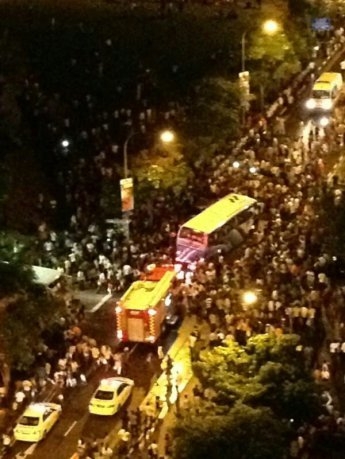 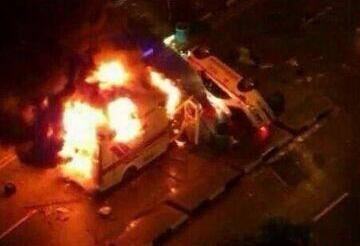 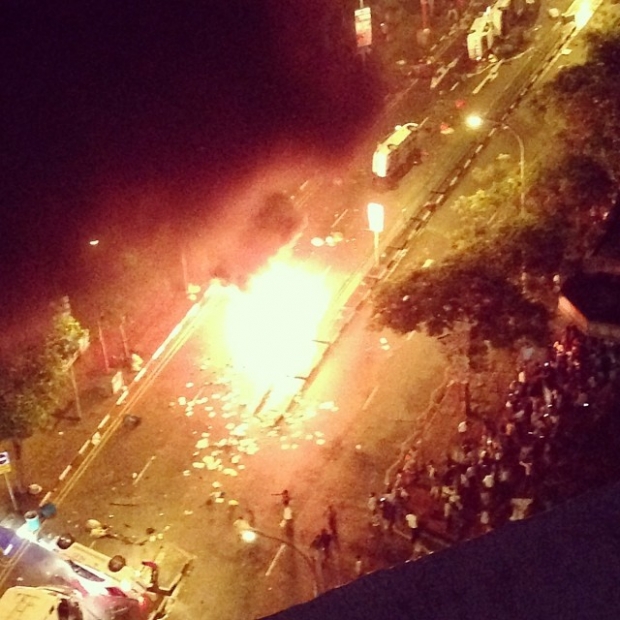 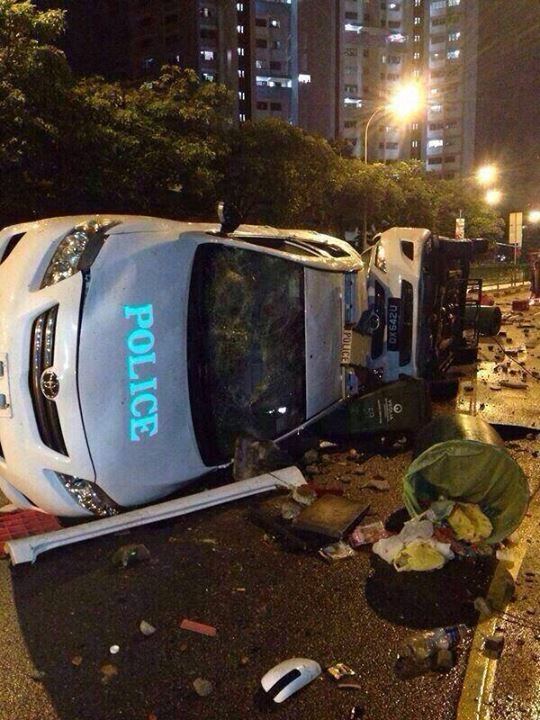 Above photo from Afiqah Fitria.

The Straits Times confirms at least two vehicles were set on fire. Today reported 5 police cars and an ambulance was damaged.

Above video shows the exploded vehicle. Skip to 3.20 in below vehicle to see the mob overturning police cars. 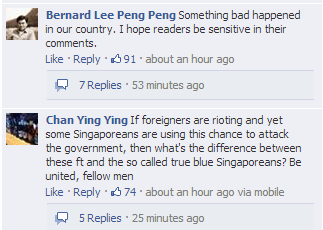 Terry Xu the Editor of TheOnlineCitizen is on the ground in Little India to cover the scene. He posted this picture. Much respect Terry! 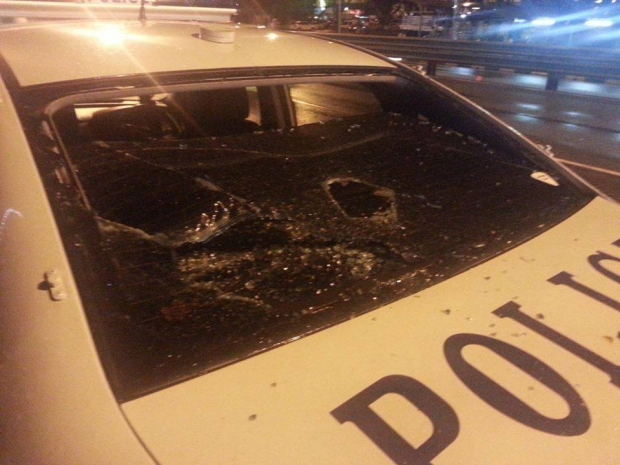 By 11pm when Terry reached the site, 3 bus loads of police officers in riot gear had responded and most of Race Course Road was already cordoned off. 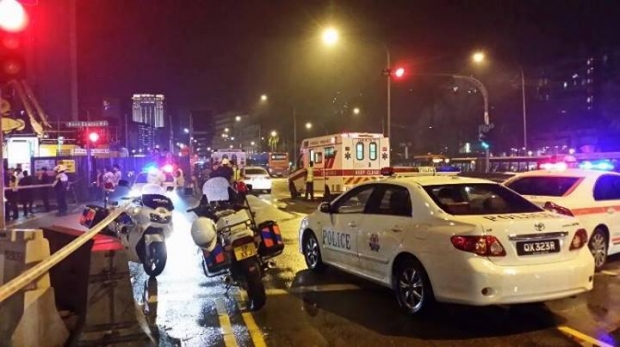 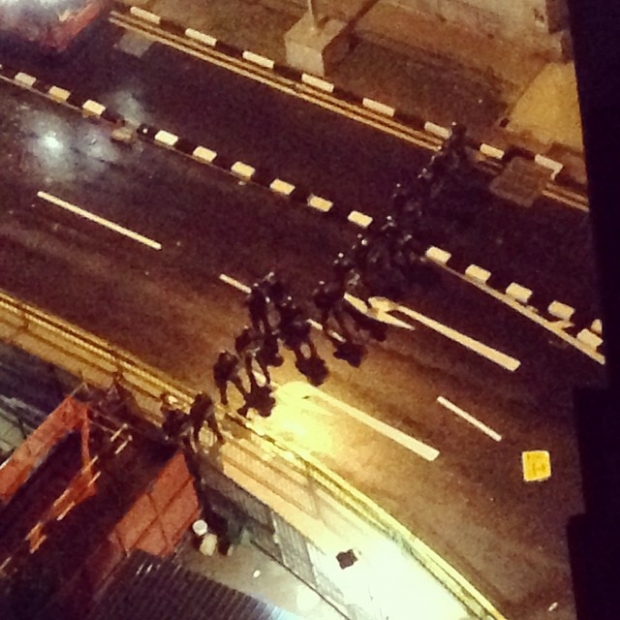 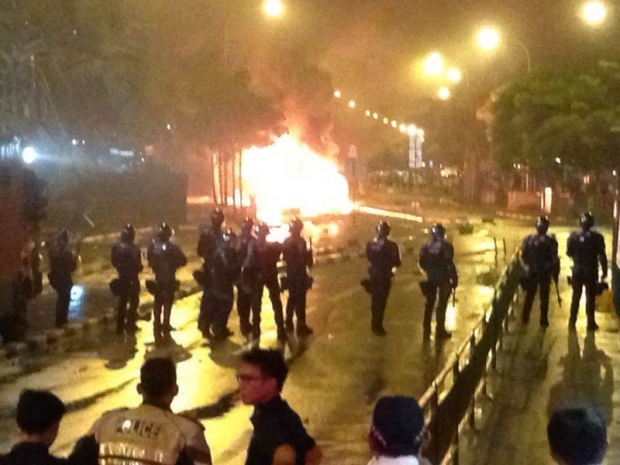 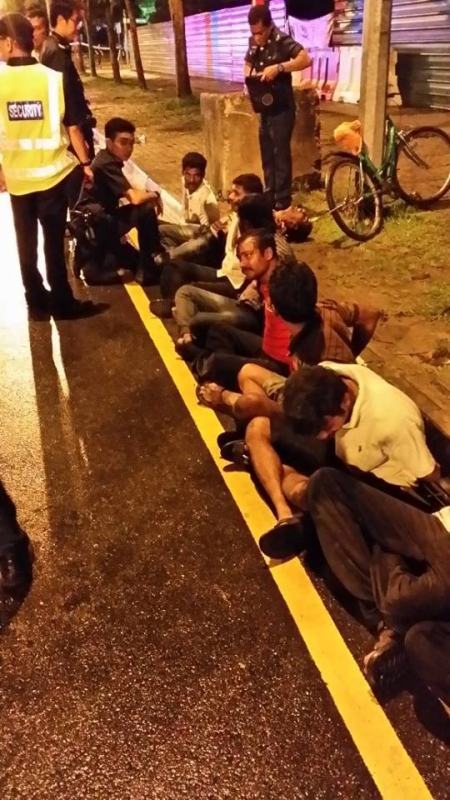 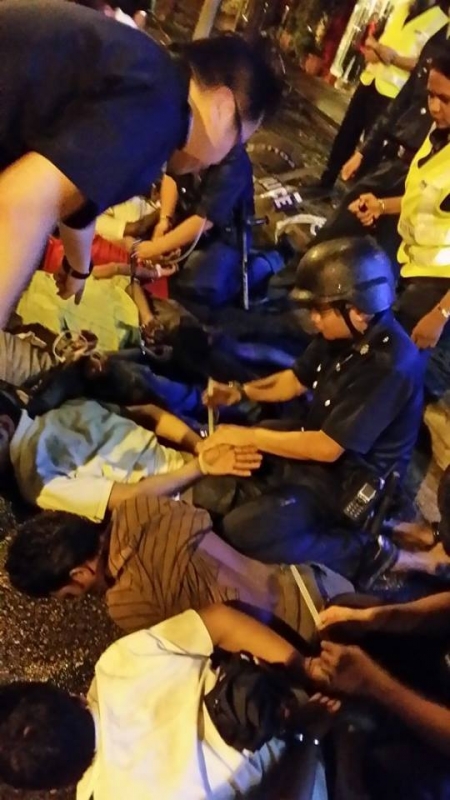 Pictures by Ang Hock Seng showing the rioters under arrest.

This latest video uploaded by TheOnlineCitizen shows that everything now seems under control.

Update on riot @ Race Course Rd & Hempshire Rd. Police in control of the situation. Public advised to stay away from the area. #Singapore 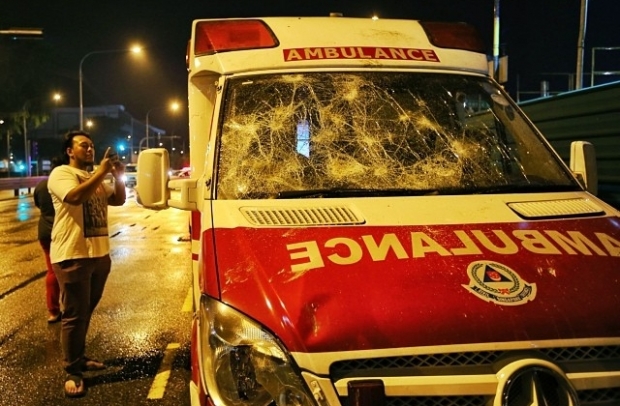 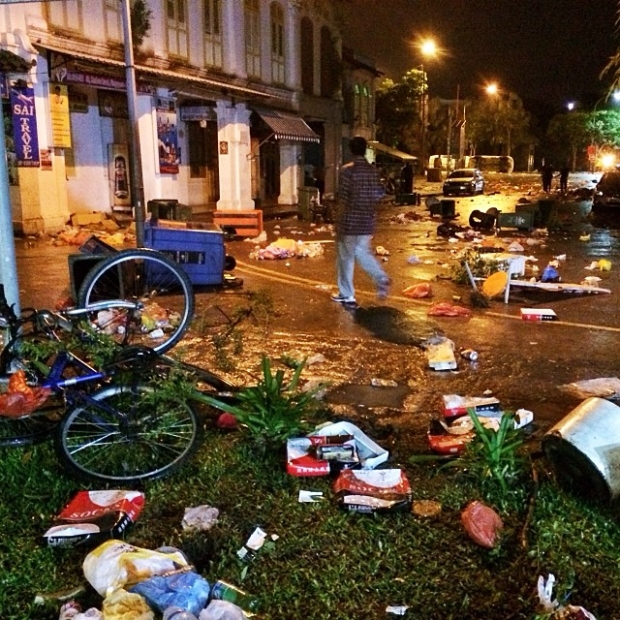 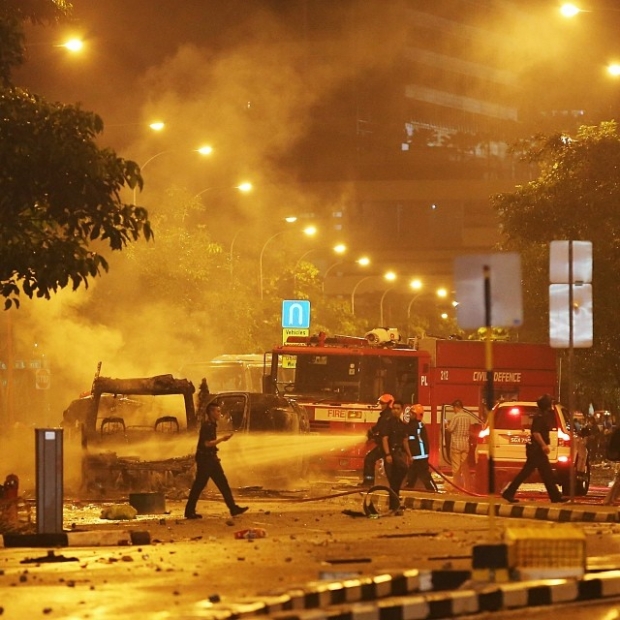 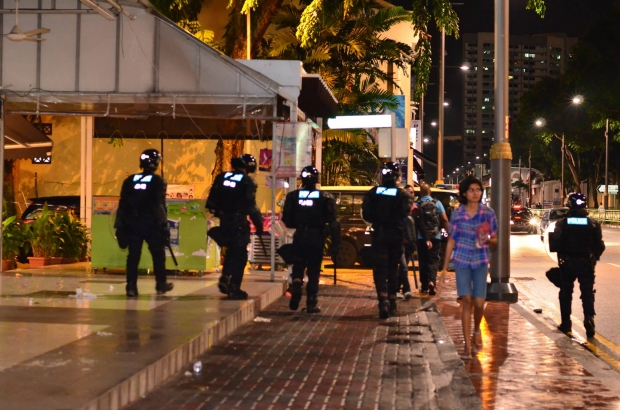 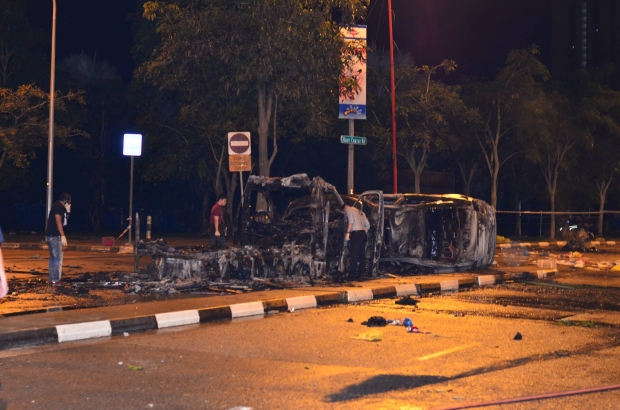 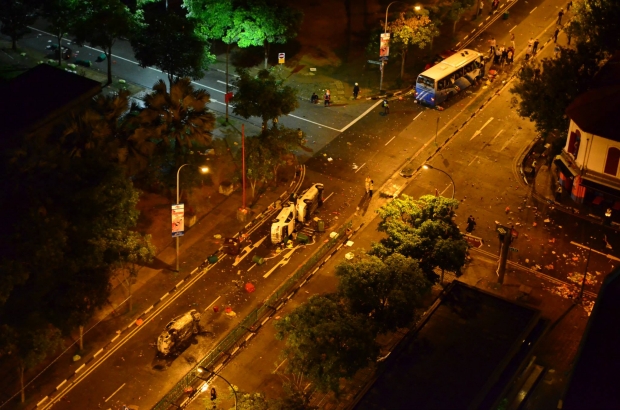 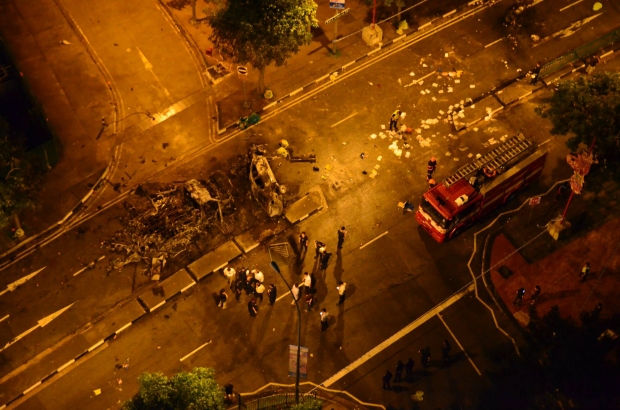 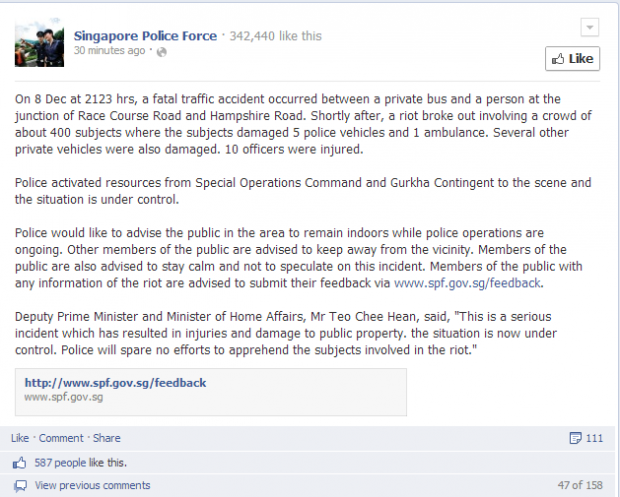 ““The Little India riot last night was a very grave incident. Several police officers were injured, and vehicles damaged or destroyed. The situation is now under control, and investigations are underway. Whatever events may have sparked the rioting, there is no excuse for such violent, destructive, and criminal behaviour. We will spare no effort to identify the culprits and deal with them with the full force of the law.””

Police has classified the case as rioting with dangerous weapons

300 police officers responded to the #LittleIndiaRiot but not a single shot, lethal or non-lethal was fired: CP Ng

Driver of private bus involved in accident before the #LittleIndiaRiot remains in hospital, he is not arrested: CP Ng

Little India Residents from RedditSG share their thoughts on the road infrastructure and how nothing was being done to improve conditions.

I don’t think anyone would have anticipated a riot breaking out after a traffic accident. I am very thankful the police force was able to respond to this matter relatively quickly, preventing it from escalating further.

And I can imagine security being beefed up in Little India henceforth which would essentially be a band-aid fix. Little India definitely won’t be the same ever again.

But what caused tensions to reach such a boiling point in the first place? That a seemingly random event would serve as the catalyst for all this repressed rage in our foreign worker community? What is the root issue here that needs to be addressed? This incident has huge implications for us since we have such a liberal immigration policy.

At least its over now and Singapore can sleep safely… for tonight.

Above: A Redditor shares his thoughts.

Below: I urge you to help spread this message too.

#littleindiariots Situation under control. Don’t stir racial angle pls. Emotions will remain raw for some time. Not a game.

This was originally posted live at 11pm, 8th December. The last update was made at 6am, 11th December.

If you’re interested in understanding the rationale behind the riots and what pushes people to behave like that, you can read this piece by Averlynn which covers “The 5 worst riots that Singapore has experienced”.

If you want some lighter and happier reading check out our recent article “52 Things to do in Singapore before you die.“