In modern society, online shopping has become the new norm. With just a few swipes on shopping platform apps such as Shopee or Lazada, we can have whatever we need delivered right to our doorstep, hassle-free.

But there are individuals who seek to take advantage of holes in the system to benefit themselves at the expense of others.

As a reviewer has recently warned, a new scam has emerged on Shopee. It involves tricking online shoppers into paying for a fake package instead of the one they intended to buy.

We go into detail about the modus operandi of the scam, and how to avoid it below.

Last Wednesday, Facebook user Nguyễn Khánh Linh posted on Thánh Riviu, a popular review group, to warn others of a scam she almost fell for while buying products on Shopee. 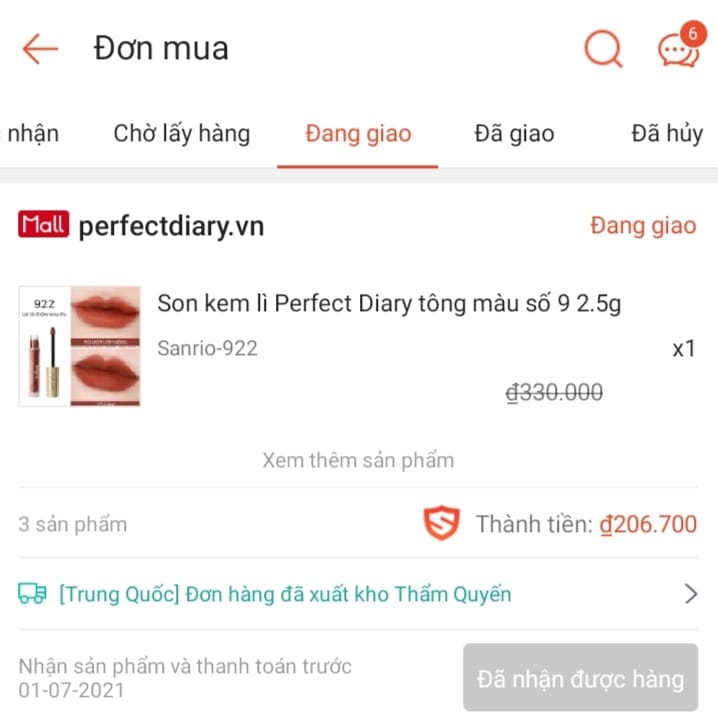 A screenshot of her online order

According to Linh, she had ordered a lipstick on Shopee a day earlier, and had opted to pay via cash on delivery.

However, just a day after she placed her order, Linh received a phone call from a delivery man, saying that her package had arrived. Its label stated her exact name, address, and the amount of money she had to pay. 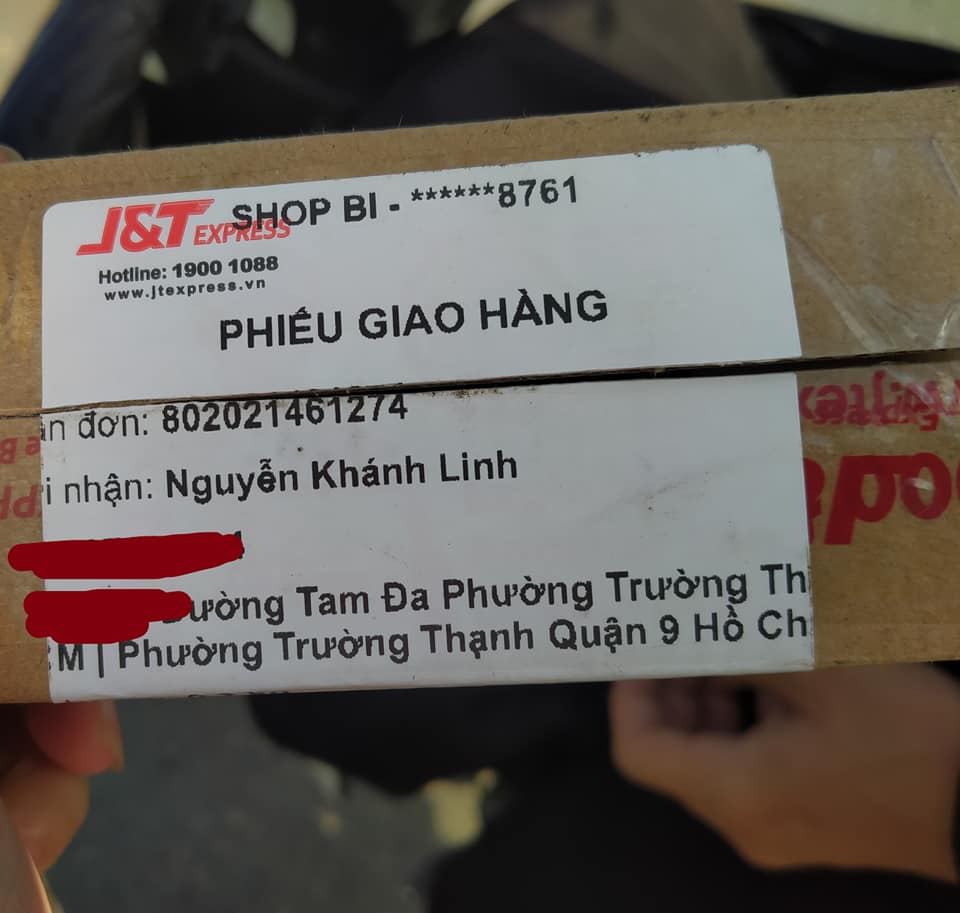 The fake package included her correct address and name, but it didn’t have the sender’s info
Image credit: Nguyễn Khánh Linh

When Linh checked on the Shopee app, it said the shipment was still in Shenzhen City – China. Skeptical, she asked the delivery man to open the package. Within the package held a cheap brand of lipstick, not the product she ordered.

Apparently, an unknown scammer had somehow got their hands on her purchase information and sent over a fake package masquerading as the real one.

If Linh hadn’t been careful, she’d have ended up paying for the fake. By the time she discovered the ruse, it’d have been too late. 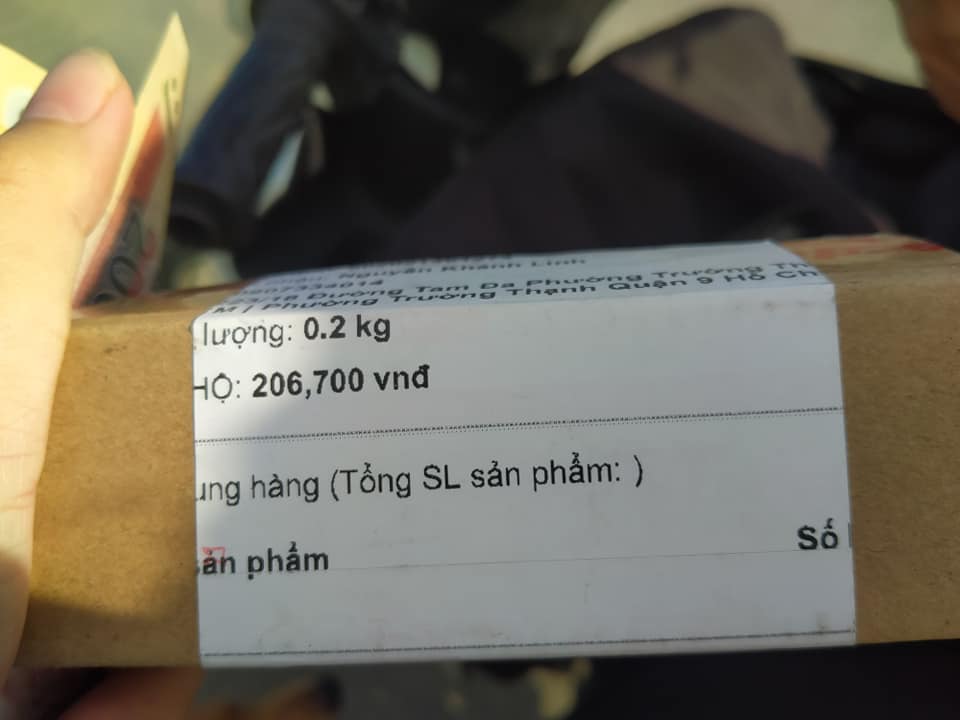 The label showed the correct amount of money she was supposed to pay
Image credit: Nguyễn Khánh Linh

Linh also clarified that what happened to her was no fault of the original seller or the delivery service – just that her purchase information got leaked, and someone tried to take advantage of it.

Of course, the scam doesn’t work if the buyer pays directly online via card – as the money would go straight to the original seller in that case. However, many customers still opt to pay in hard cash on delivery, so if they do get tricked into paying for a fake package, the delivery service would send the money back to the scammer.

Linh’s post quickly went viral, and many netizens have flocked to the comments section to share similar stories.

According to Hiền Nguyễn – who wasn’t home when the delivery arrived – she asked her roommate to get the package for her. The roommate saw the correct name, address, and cost printed on the label, paying for it without much thought. 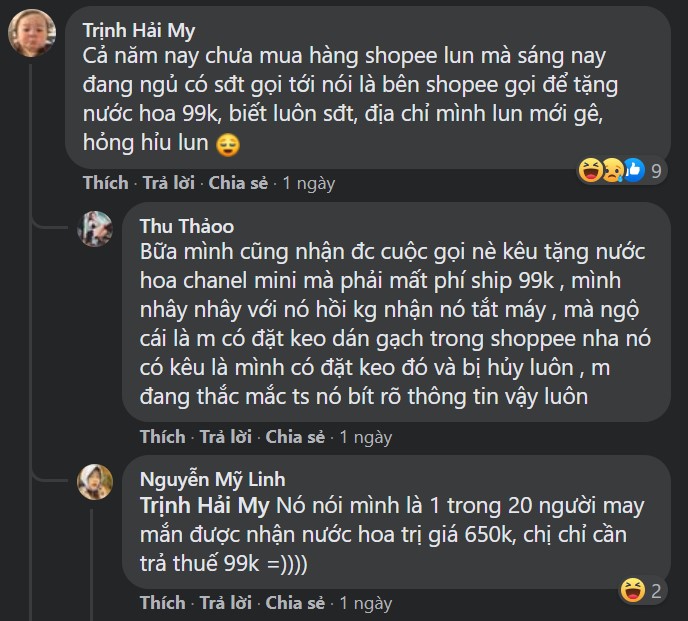 Meanwhile, commenter Trịnh Hải My shared another scam echoed by many other netizens.

An unknown number called her on the phone, stating her correct name and address, and said she was one of the 20 customers lucky enough to have won an expensive bottle of perfume in a giveaway. However, she’d have to pay a delivery fee of VND99,000 (~USD4.30) to receive it.

Of course, there was no giveaway program, and those that fell for the ruse eventually lost money.

Stay vigilant to guard against this package scam on Shopee

To avoid similar scams, do remember to check the package’s status on the app. Don’t be afraid to ask the delivery man to open the box to verify the purchase, just as the original poster did.

We’re also encouraged to check each package carefully to look for abnormal signs. Very often, the fake package will not come from Shopee, and be sent under fake names such as “Shope” or “Shoppe”.

Finally, paying via card online is a feasible way to circumvent this particular scam. 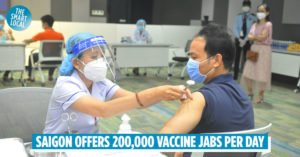 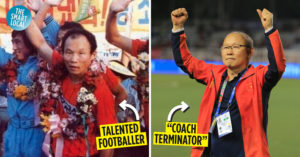