Saigon’s appearance has changed dramatically through more than 300 eventful years of its existence. Unfortunately, that means the number of Saigon’s lost landmarks are a lot more than a few.

To help you have a better image of what the city looked like in the past, we have gathered a list of some lost historical landmarks of Saigon and what stands in their place today.

1. The tomb of Pigneau de Béhaine – now a busy roundabout 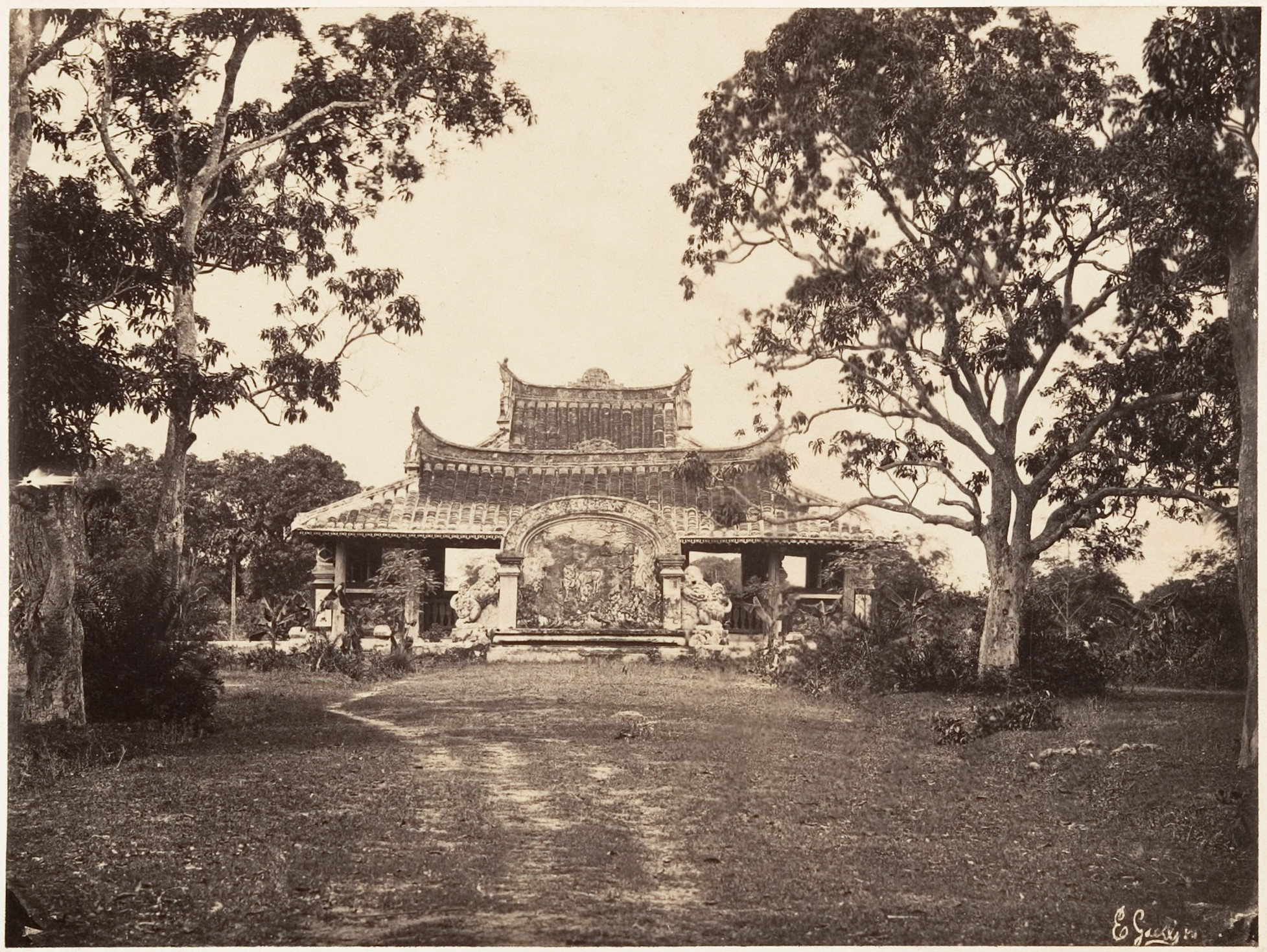 Pigneau de Béhaine was a French priest who helped Emperor Nguyễn Ánh, known as Gia Long since 1802, build his empire. After de Béhaine’s death from a disease in 1799, Nguyễn Ánh had a tomb built for him near Tân Sơn Nhất, Gia Định. 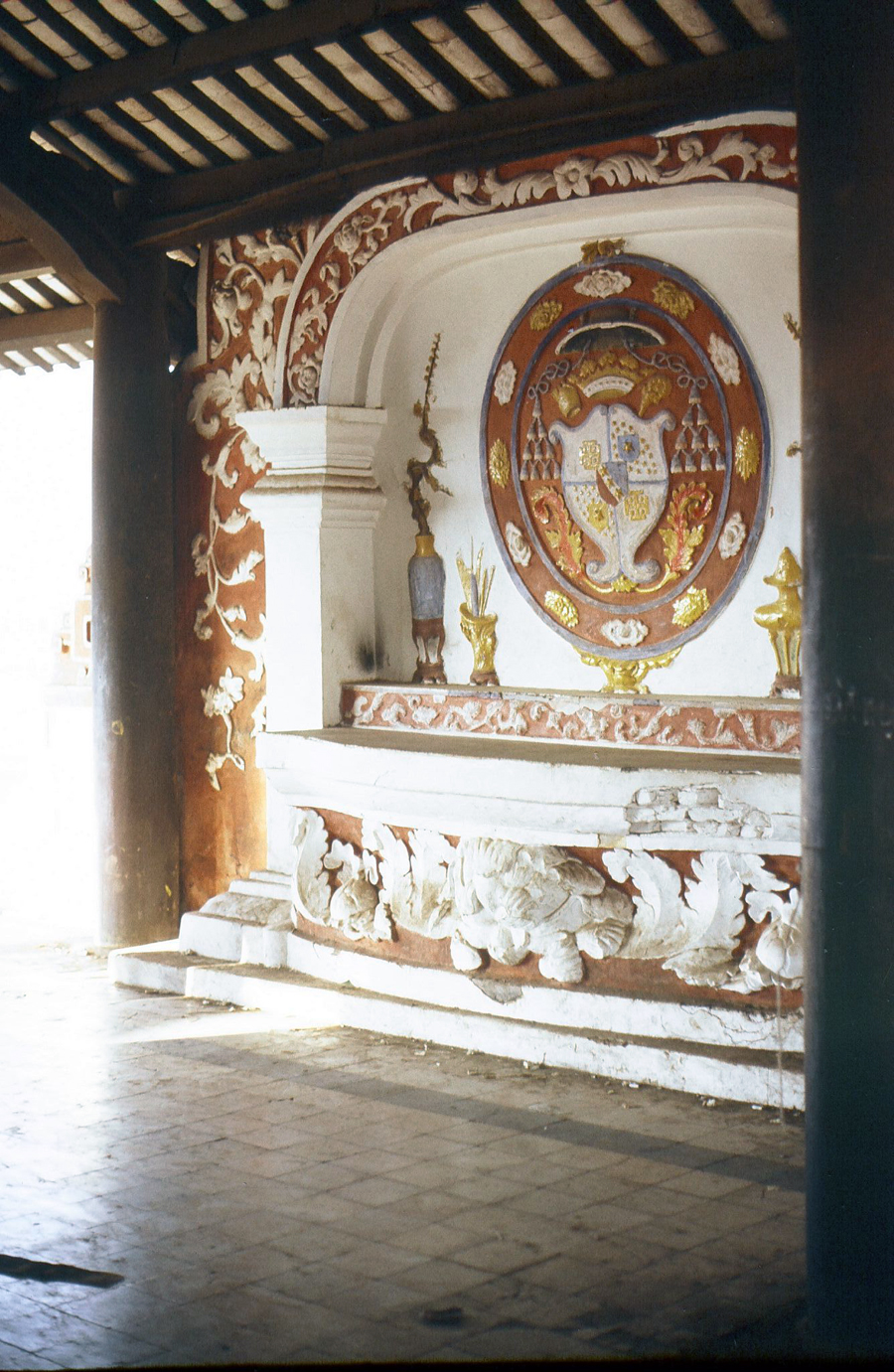 Though Pigneau de Béhaine was a Frenchman, his tomb had architecture similar to tombs of of the Vietnamese elite at that time. In fact, it included the main altar house with a complex system of wooden pillars and roof beams, and a ceramic tiled roof decorated with Asian dragon figures. 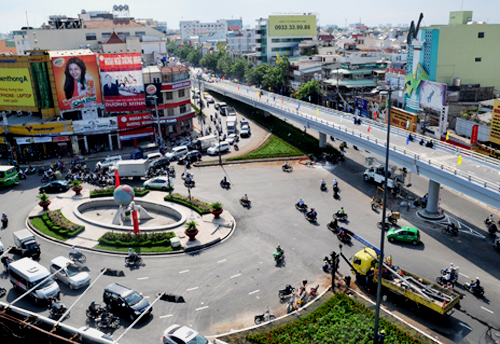 The location of this tomb is now a big roundabout with a globe in the middle.
Image credit: VnExpress

In 1983, the tomb was demolished due to a new urban plan. The priests’ remains were returned to the French Embassy. Then the area where the tomb once stood was then renovated into a roundabout.

Though the tomb is no longer there, the locals still call the roundabout Lăng Cha Cả, or the Great Priest Roundabout. 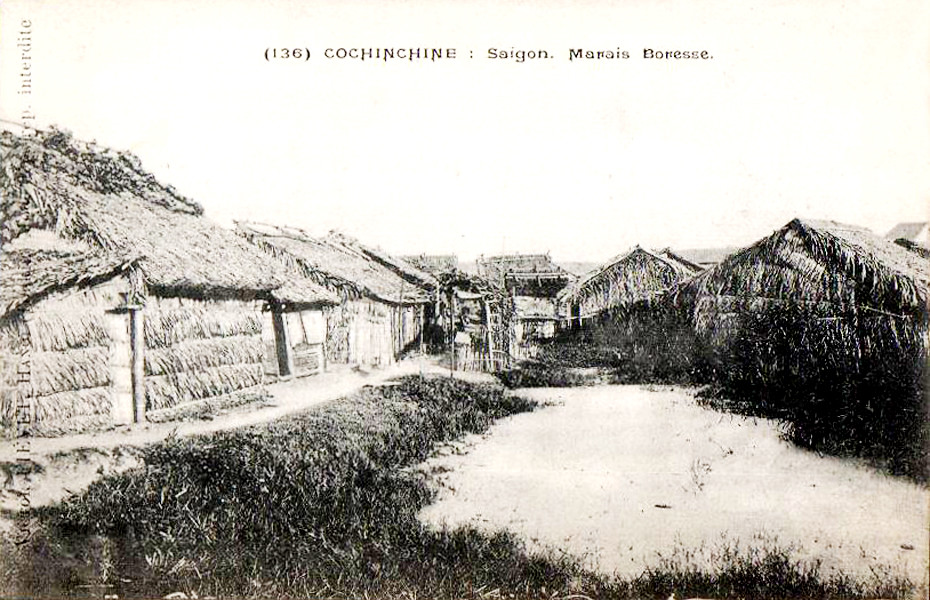 Marais Boress was filled with swamps and cottages. This part of Marais Boresse may be Quách Thị Trang roundabout today.
Image credit: manhhai

Today, there is nothing left from the Marais Boresse. However, the transformation from this large swamp into a symbolic market gives us an impression of how the city has developed over the years.

For nearly a century after the French had occupied Gia Định, now known as Saigon, in 1859, the area that would be Hồ Chí Minh City was scattered with ponds and swamps. These swamps were so large that they separated Saigon and Cholon into two separate metropolises.

Marais Boresse, or ao Bồ-rệt in Vietnamese, was a giant swamp in the middle of Saigon at the time. This was actually a slum with poor living conditions. While in the daylight, it seemed like an abandoned land, it became a lively area at night with gobs of street food stalls. 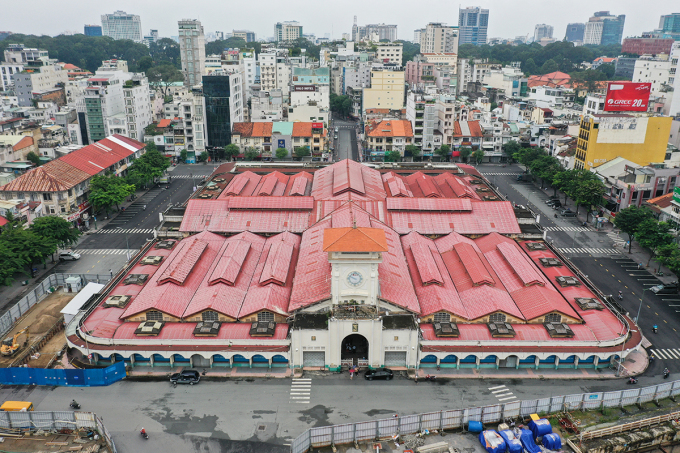 In the 1890s, the colonial government decided to redevelop Marais Boresse. However, this project was delayed for years due to a funding shortage. The swamps were filled gradually in the 1900s to build new streets.

From 1911 to 1914, a new market was built in the middle of the filled Marais Boresse area to replace the old market on Boulevard Charner (Nguyễn Huệ Street today). The new market was called Chợ Mới (literally New Market) or Bến Thành. Indeed, it was French urban planning that turned the flophouses around the former swampland into a significant landmark. 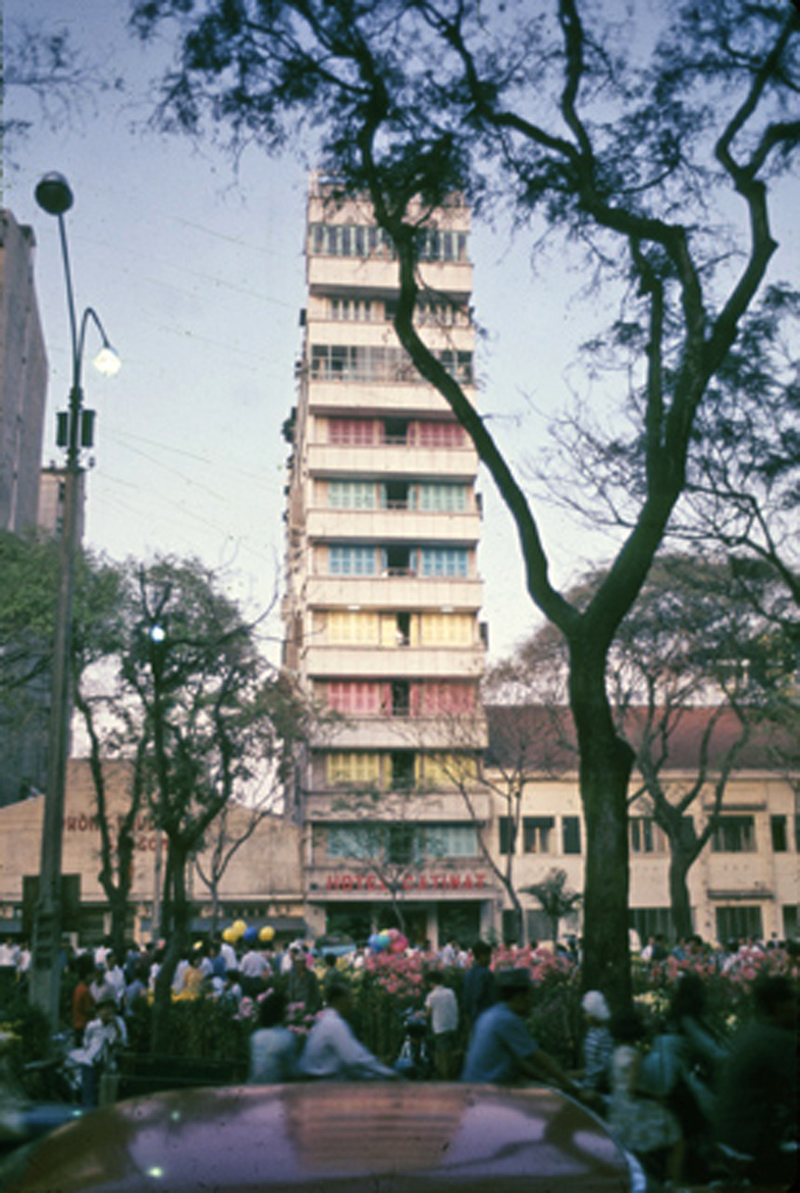 Our picture of the entertainment in southern Vietnam before 1975 will not be complete if it doesn’t include musical nightclubs. Among these clubs, Đêm Màu Hồng, Vietnamese for The Pink Night, stood out as the most significant one.

After the Geneva Accord divided Vietnam into two parts in 1954, many artists, particularly singers, musicians, and music composers moved southwards. In their new land, they started to form dancing clubs.

However, due to then-South Vietnam’s President Ngô Đình Diệm’s ban on public dancing activities in the 1960s, these clubs turned into singing venues. The Saigonese at that time gradually formed a habit of going to nightclubs to listen to their favourite singers. 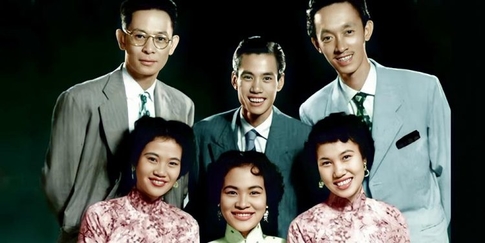 Being part of this trend, Đêm Màu Hồng club welcomed big audiences every night. Established in 1967 by Hanoian musician Phạm Đình Chương, Đêm Màu Hồng was named after one of his songs. The club was located inside the Catinat Hotel with two facades at 36 Nguyễn Huệ Street and 69 Tự Do Street (renamed as Đồng Khởi Street after 1975).

In the club, people could enjoy many genres of music from traditional Vietnamese music, rumba (now commonly referred to as bolero), and even the sensational rock music of that time. 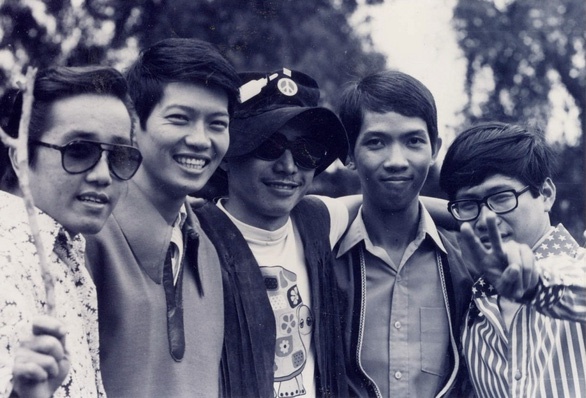 Some members of this band, such as Lê Hựu Hà, Nguyễn Trung Cang, and Elvis Phương, have since become household names. 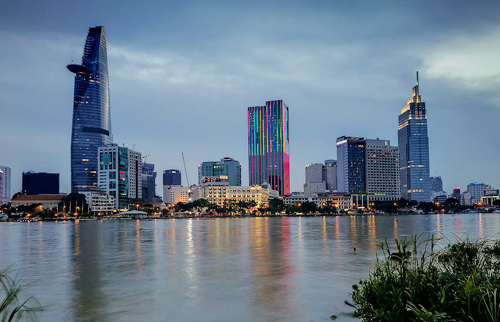 After the Fall of Saigon in 1975, all nightclubs in Saigon came to a halt. Đêm Màu Hồng was not an exception. Catinat Hotel, where it was located, was demolished in 2008 to make place for the new Saigon Times Square. 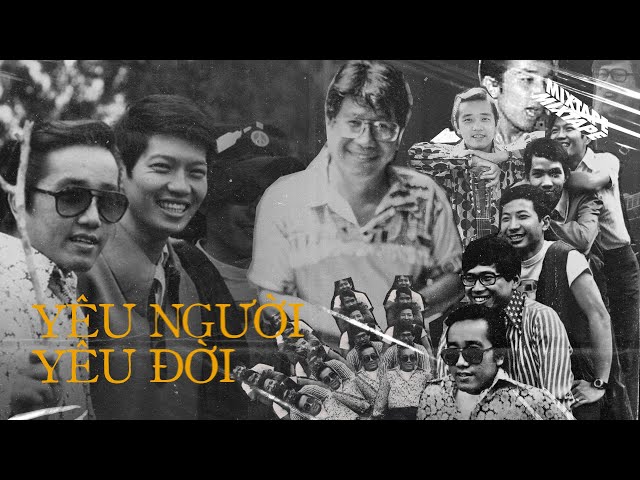 4. The City Hall of Cholon – now a top-notch medical university 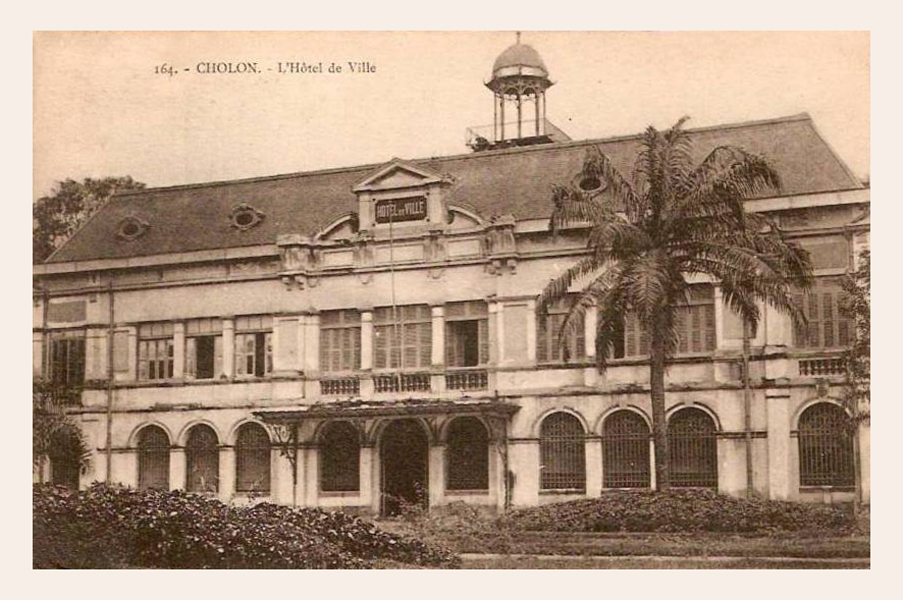 The City Hall of Cholon around 1900
Image credit: manhhai

You may be wondering why the former name of Hồ Chí Minh City Hall had the same name, Xã Tây (meaning the area of the French), as a market in Cholon, which is 6 kilometres in between. That was because Cholon used to have its own city hall.

As mentioned above, in the 19th century, Saigon and Cholon were two separate metropolises. The City Hall of Cholon was built in 1889, and together with adjacent buildings such as the Inspection Bureau, The Drouet, Maternity and Municipal Hospitals, it was part of the French Quarter in Cholon. Today, the three hospitals are still standing and known as Phạm Ngọc Thạch, Hùng Vương, and Chợ Rẫy Hospitals respectively. 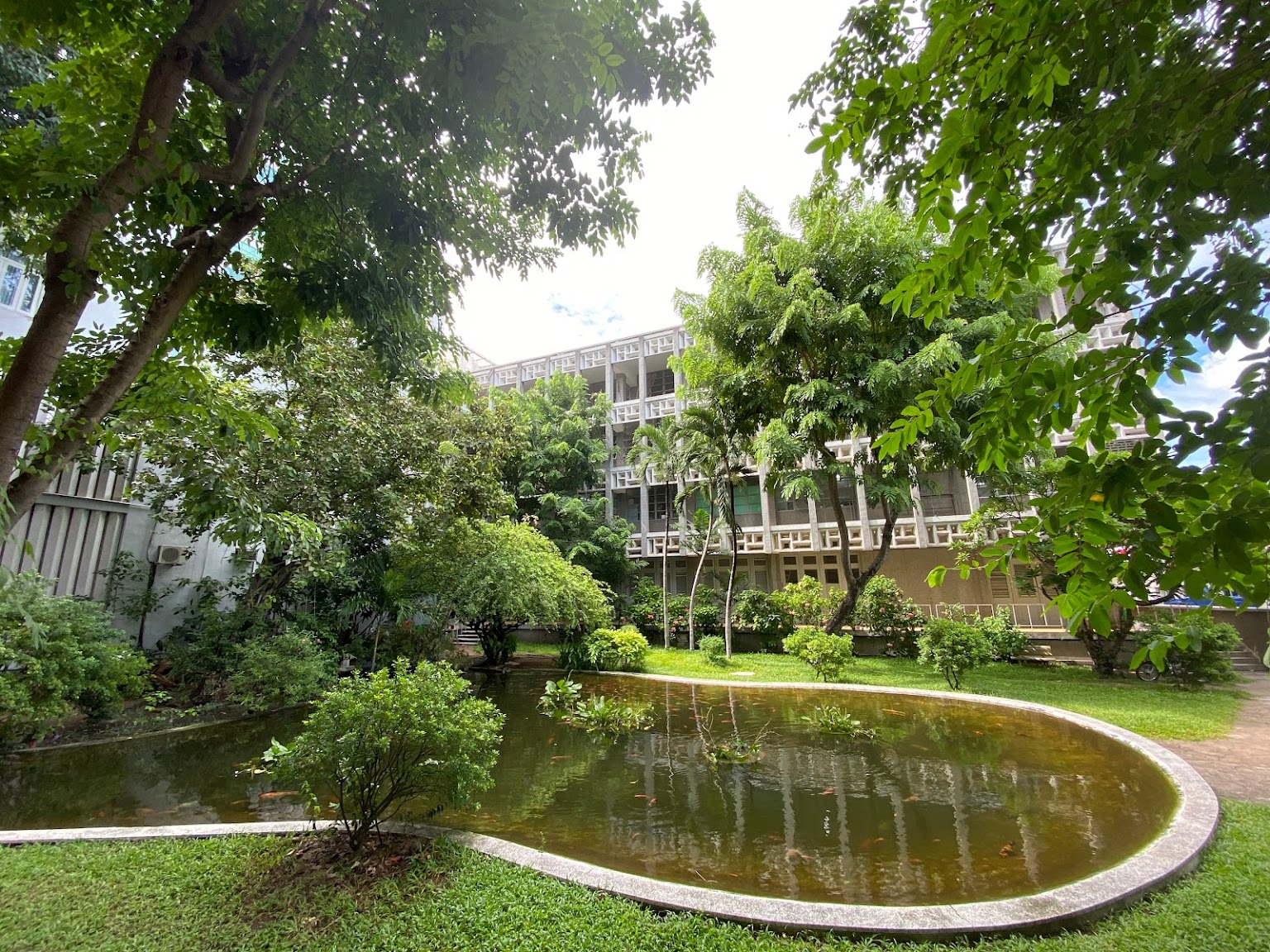 The campus of the University of Medicine and Pharmacy at Hồ Chí Minh City
Image credit: Anh Tuấn Hồ

In 1925, when the City Hall was destroyed, The back part of the area was used as a marketplace. The market still opens today by the name of Xã Tây Market though the City Hall, or Dinh Xã Tây as the locals called it, is no more. 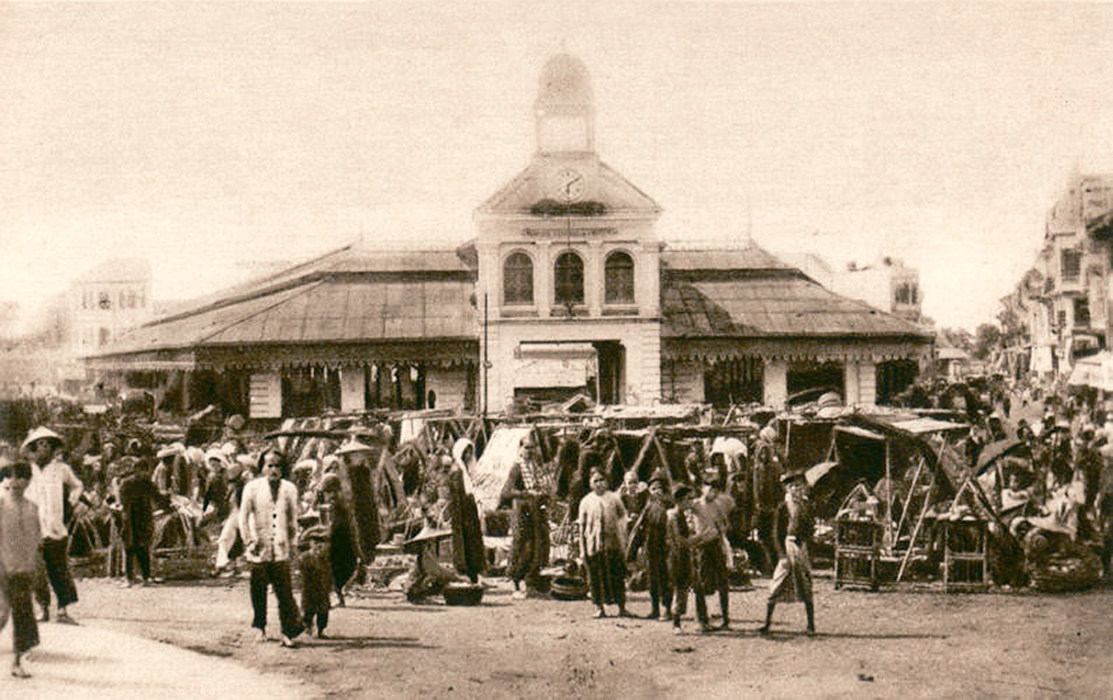 The original market before being burned down in a fire.
Image credit: manhhai

Cholon, literally meaning The Large Market, is now well known as the Chinatown of Saigon. In fact, the name derived from the market established by the Chinese Vietnamese when they first settled here. However, this market has long been replaced by a post office. 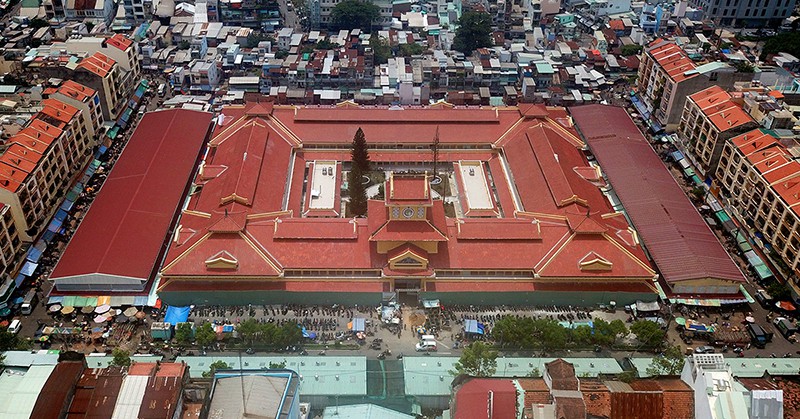 In the 17th century, there were already some small communities of Chinese settled in the area of Cholon after fleeing from China to protest the new Qing Dynasty. They named their new land 堤岸 (Đê Ngạn).

The population of Cholon rose rapidly after heaps of people had moved from Phố Island in Biên Hòa, Đồng Nai to Đê Ngạn due to the conflict between the Tây Sơn army and Nguyễn Ánh’s forces. 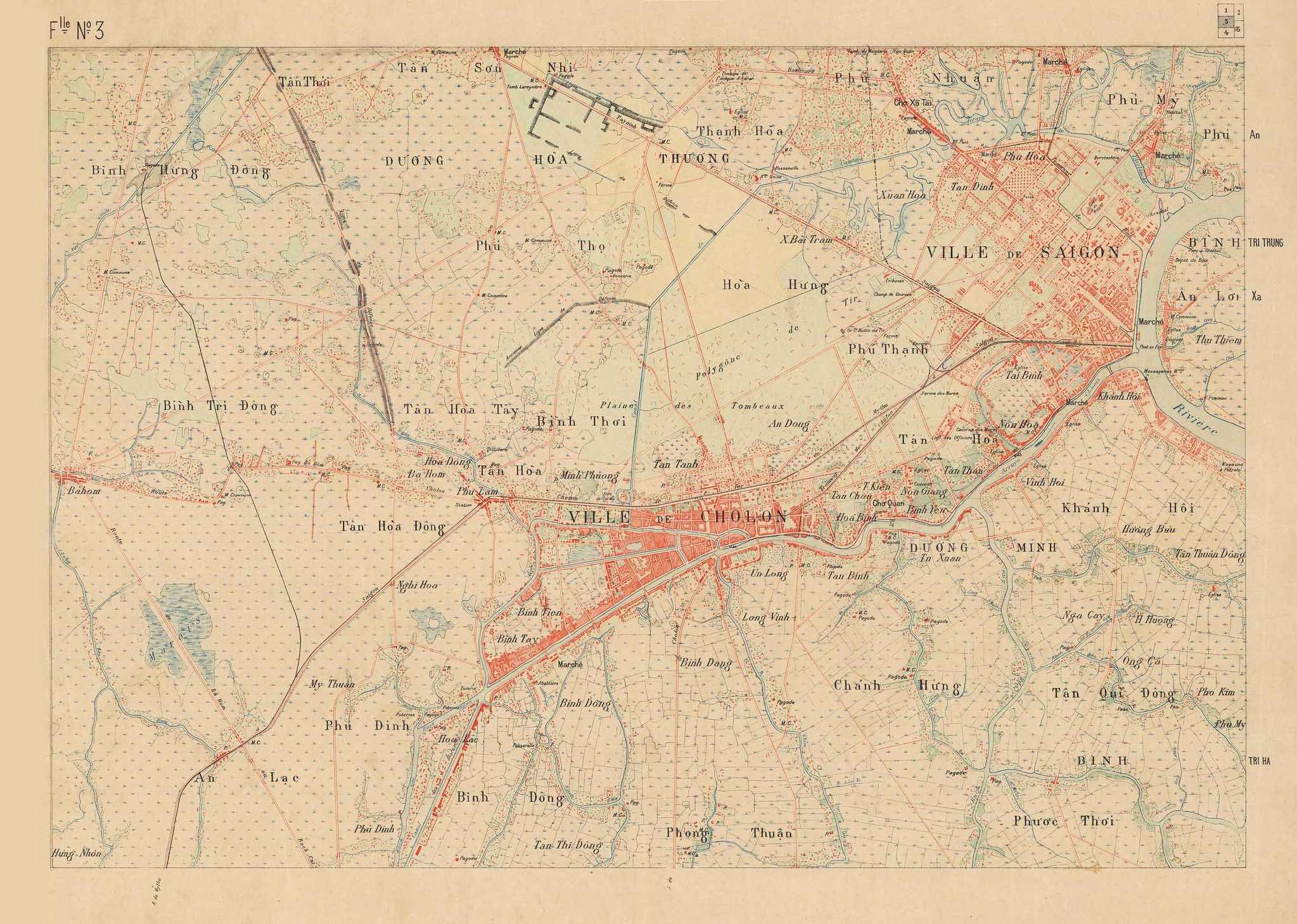 People started to form a marketplace to meet the local demand for goods. Compared to Quán Market (also known as Tân Kiểng Market) of the Vietnamese, this market was bigger, so it was called Chợ Lớn.

The name Cholon was adapted by the Vietnamese to refer to the Chinatown area, while the locals still used the name 堤岸 or Thầy Ngòn. According to scholar An Chi, 堤岸 or Thầy Ngòn was actually an alternative Chinese rendition of the name Saigon besides 西貢 (Tây Cống / Xấy Cung). 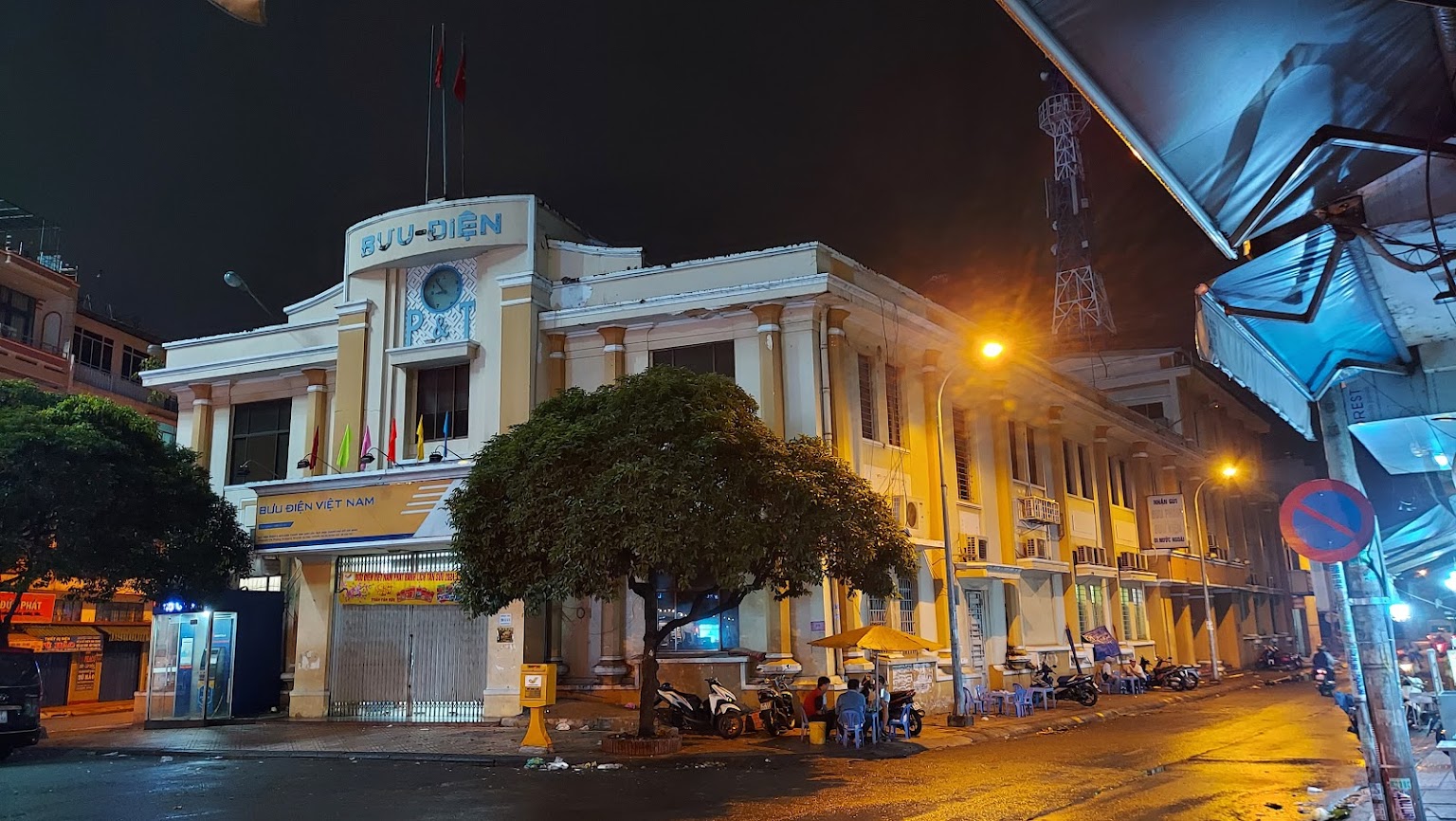 In 1928, a Chinese Vietnamese merchant named Quách Đàm (郭琰) used his own money to build a new market after the old one was razed to the ground in a fire. In 1930, the new market opened and became today’s Bình Tây Market. On the site of the old market, people built a new building which is now the District 5 Post Office. 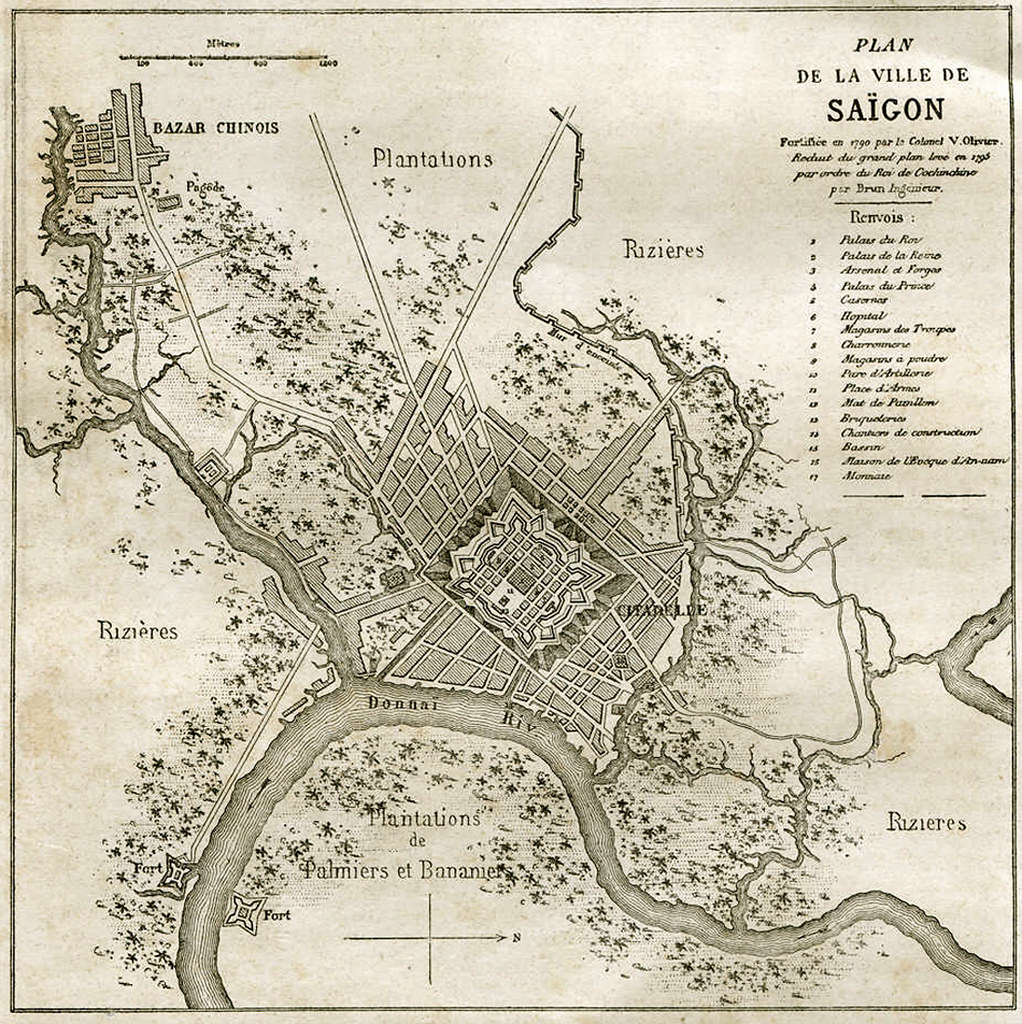 The 1790 map of Saigon with a clear aerial view of the Turtle Citadel. You can also spot the Chinese community (which would be Cholon later) to the top left of the map, credited as Bazar Chinois (French for Chinese Market).
Image credit: manhhai

One of the biggest structures that was destroyed in Saigon was the Turtle Citadel. This was an important citadel that helped the Nguyễn emperors defend the city for quite a long time.

In 1790, at the site of Tân Khai Village, which may covers Districts 1 and 3 today, Lord Nguyễn Ánh had Olivier de Puymanel, Théodore Lebrun, and Pigneau de Béhaine design a citadel to fit the urban plan done by general Trần Văn Học.

Because all these designers were Westerners, their design imitated the European Vauban design with star-shaped walls and fortifications at each point. As the citadel had 8 sides, the locals named it Thành Bát quái (the Baigua Citadel) or Thành Quy (the Turtle Citadel) after the animals considered sacred in local culture. 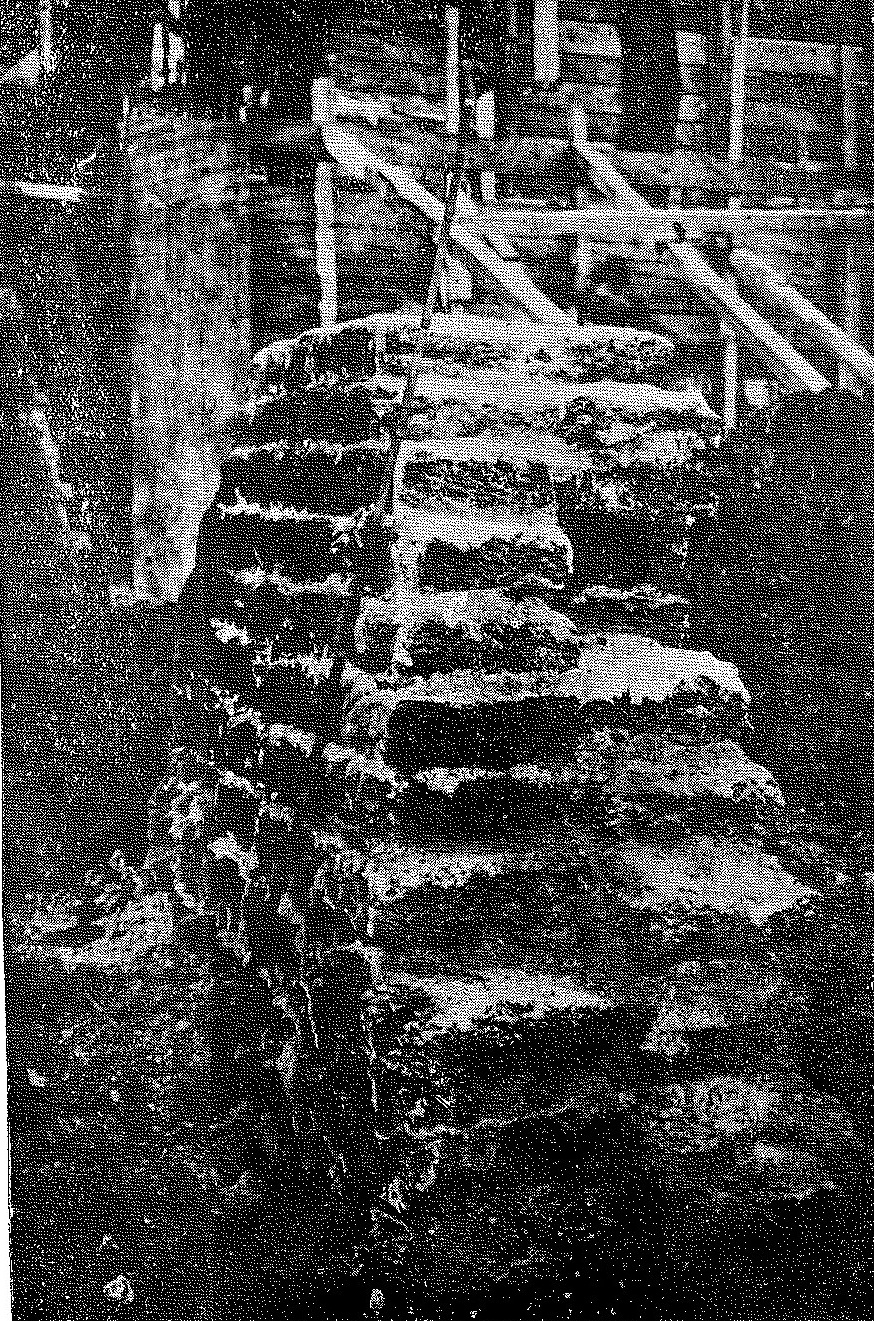 Everything changed in 1833 when general Lê Văn Khôi and his troops rebelled against the government of Emperor Minh Mạng, who was Nguyễn Ánh’s son. At the peak of this uprising, Lê Văn Khôi occupied the Turtle Citadel. After two years of fighting, multiple generals of the Nguyễn Dynasty defeated Lê Văn Khôi’s force with their large well-trained troops and clever tactics. In 1836, Minh Mạng decided to destroy the whole citadel.

If the citadel remained, its side walls would have bordered Đinh Tiên Hoàng Street to the east, Nam Kỳ Khởi Nghĩa Street to the west, Lê Thánh Tôn Street to the south, and Nguyễn Đình Chiểu Street to the north. The present-day Notre Dame Cathedral area would be the centre of this citadel. 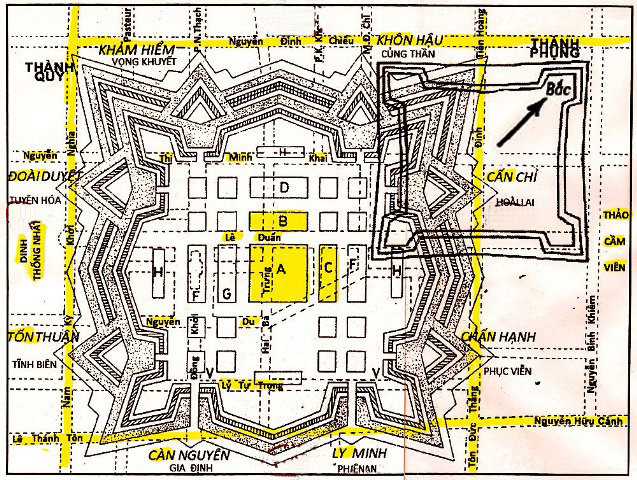 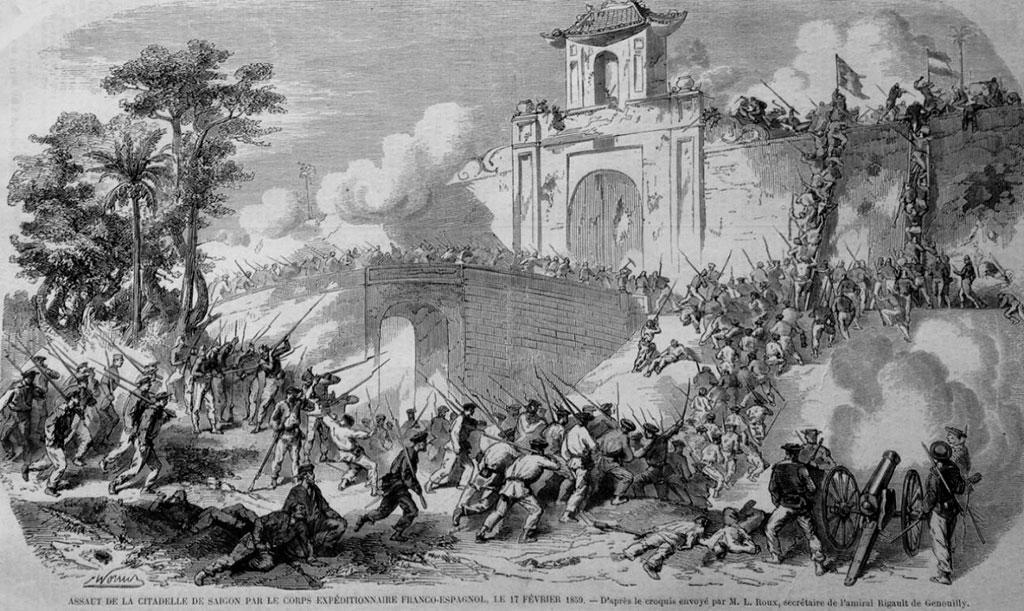 The French siege of Saigon in 1859. This gate of the Phoenix Citadel would have been on Lê Duẩn Street today if it had not been destroyed.
Image credit: Thanh Niên

Realising the strategic location of this citadel, not long after, they demolished it to make room for colonial buildings such as the Infantry Barrack (now the University of Social Sciences and Humanities and the University of Pharmacy).

The Phoenix Citadel (right) as drawn in a city plan in 1881. You can also spot the Norodom Palace (later Independence Palace), Notre Dame Cathedral in this plan.
Image adapted from manhhai

If the citadel had not been annihilated, the Phoenix Citadel would have bordered Nguyễn Du, Mạc Đĩnh Chi, Nguyễn Đình Chiểu, and Nguyễn Bỉnh Khiêm Streets today. The building of Hồ Chí Minh City Television would have been surrounded by four citadel walls. 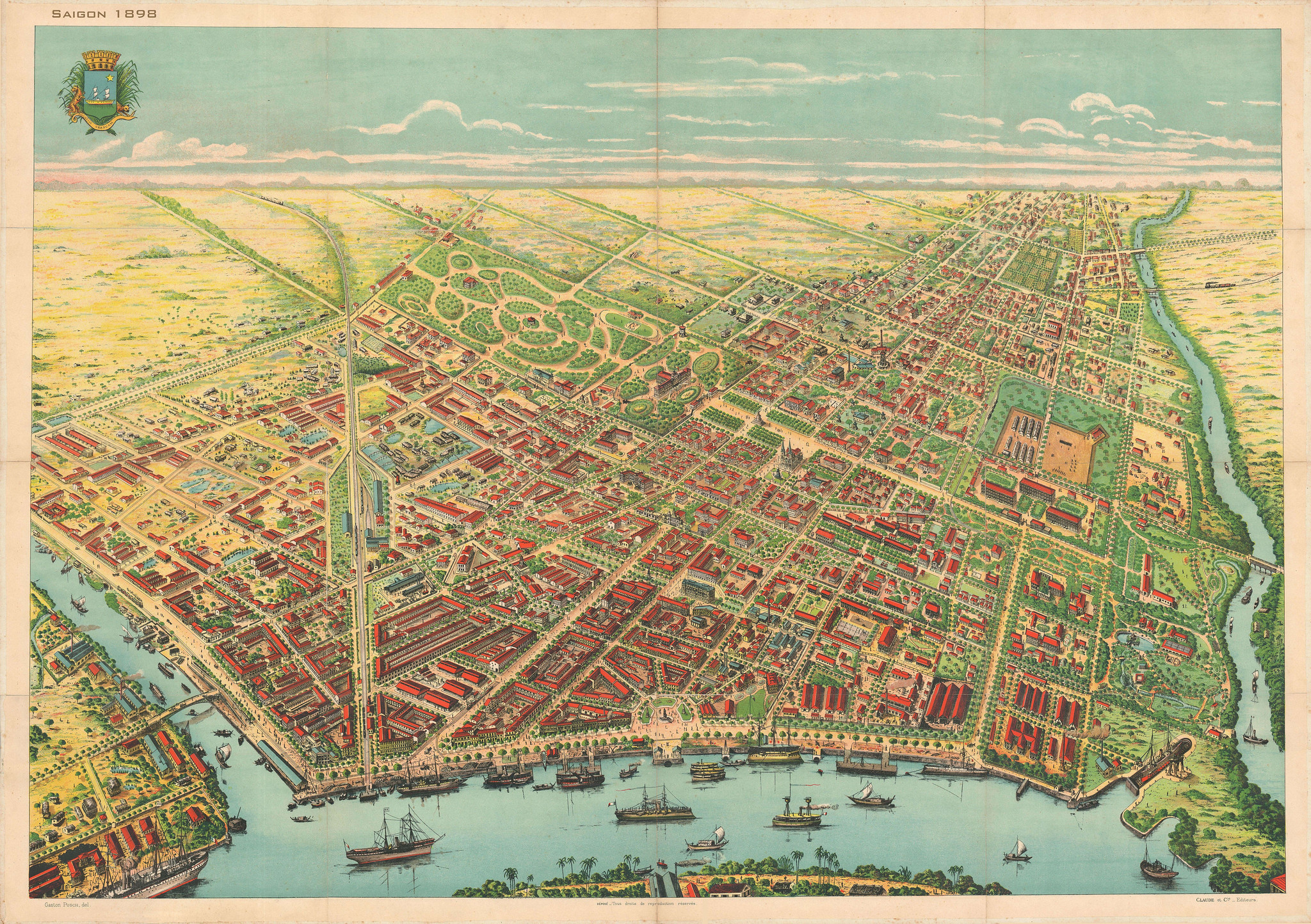 The master plan of Saigon in 1890. This plan is displayed at Hồ Chí Minh City Hall.
Image credit: manhhai

We introduce these lost landmarks to offer you can have a clearer understanding of how the city has changed over its short history.

Thinking about how the city may have looked very different from what it is now had history taken a different turn may make your trip around the city more interesting and insightful. 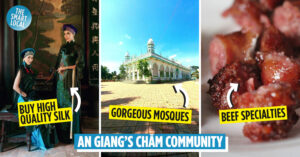 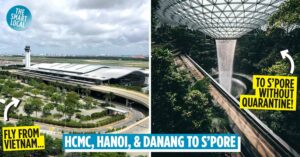