Located about 200 kilometres, or 4 hours of driving, from the southwest of Hồ Chí Minh City, An Giang is a colourful border province where you can explore the heart of the Chăm community in the Mekong Delta.

To introduce you to the interesting culture we can discover when visiting the Chăm people in An Giang, we have gathered 7 facts about An Giang’s Chăm community.

1. This is one of three big Chăm communities in Vietnam 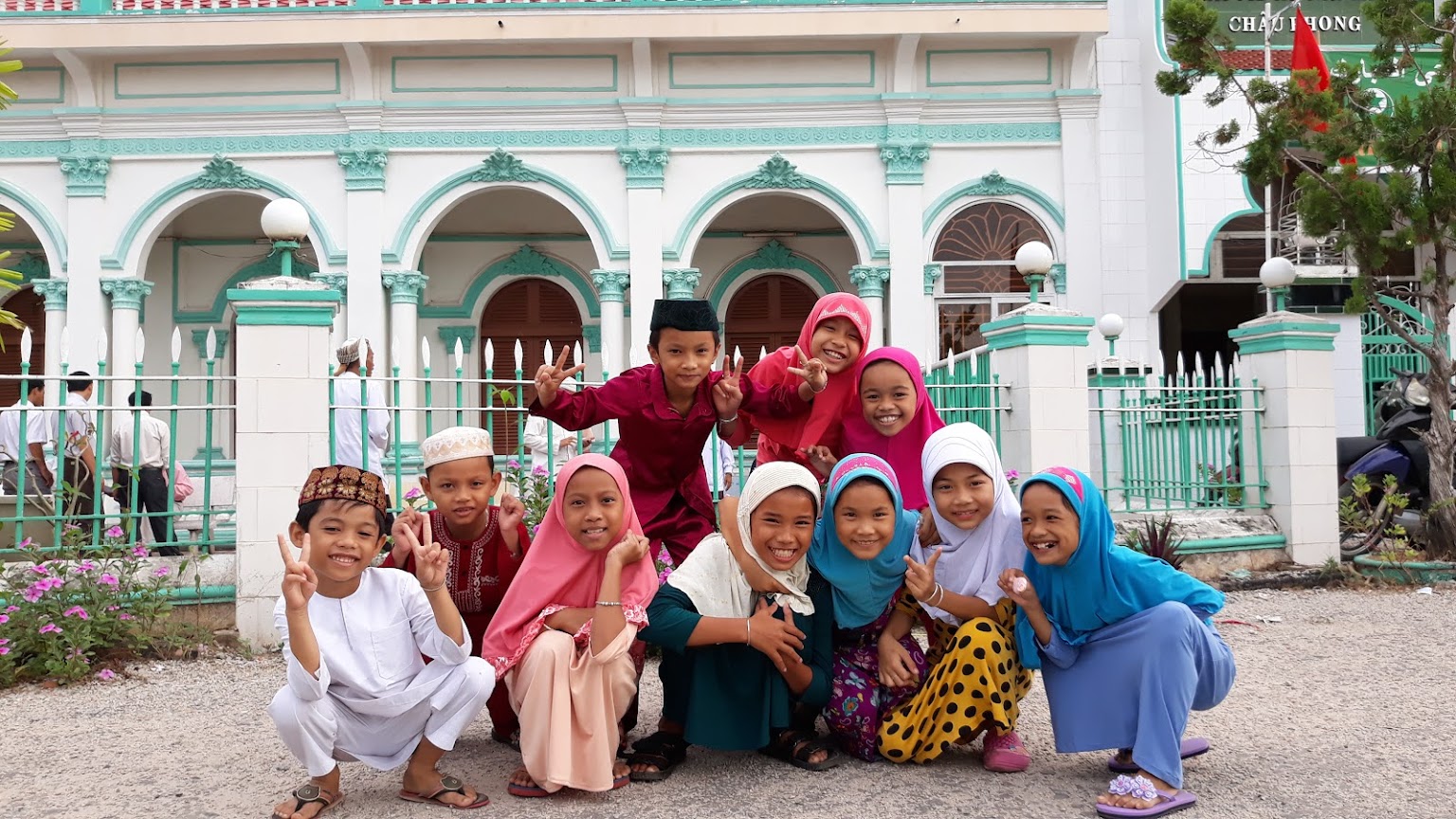 Chăm children playing in front of a mosque in Châu Phong Village, An Giang Province.

The Chăm community is considered an ethnic minority in Vietnam, with a total population of more than 178,000 as of 2019. Generally, the Chăm people in Vietnam can be distinguished into three groups.

First of all, the Chăm H’roi people live in Gia Lai, Phú Yên, and Bình Định – upper provinces in south-central Vietnam. Simultaneously, the Chăm Panduranga, also known as Eastern Chăm, people form another community in the Ninh Thuận and Bình Thuận provinces in lower southern central Vietnam. The third group of Chăm people are called Southern Chăm or Western Chăm. A large part of the Chăm community is located in Hồ Chí Minh City and the An Giang province in southern Vietnam.

Specifically in the Mekong Delta, An Giang’s Chăm community has a population of 17,000 people living in 9 distinctive villages. Most of these villages are around Tân Châu town and An Phú district. 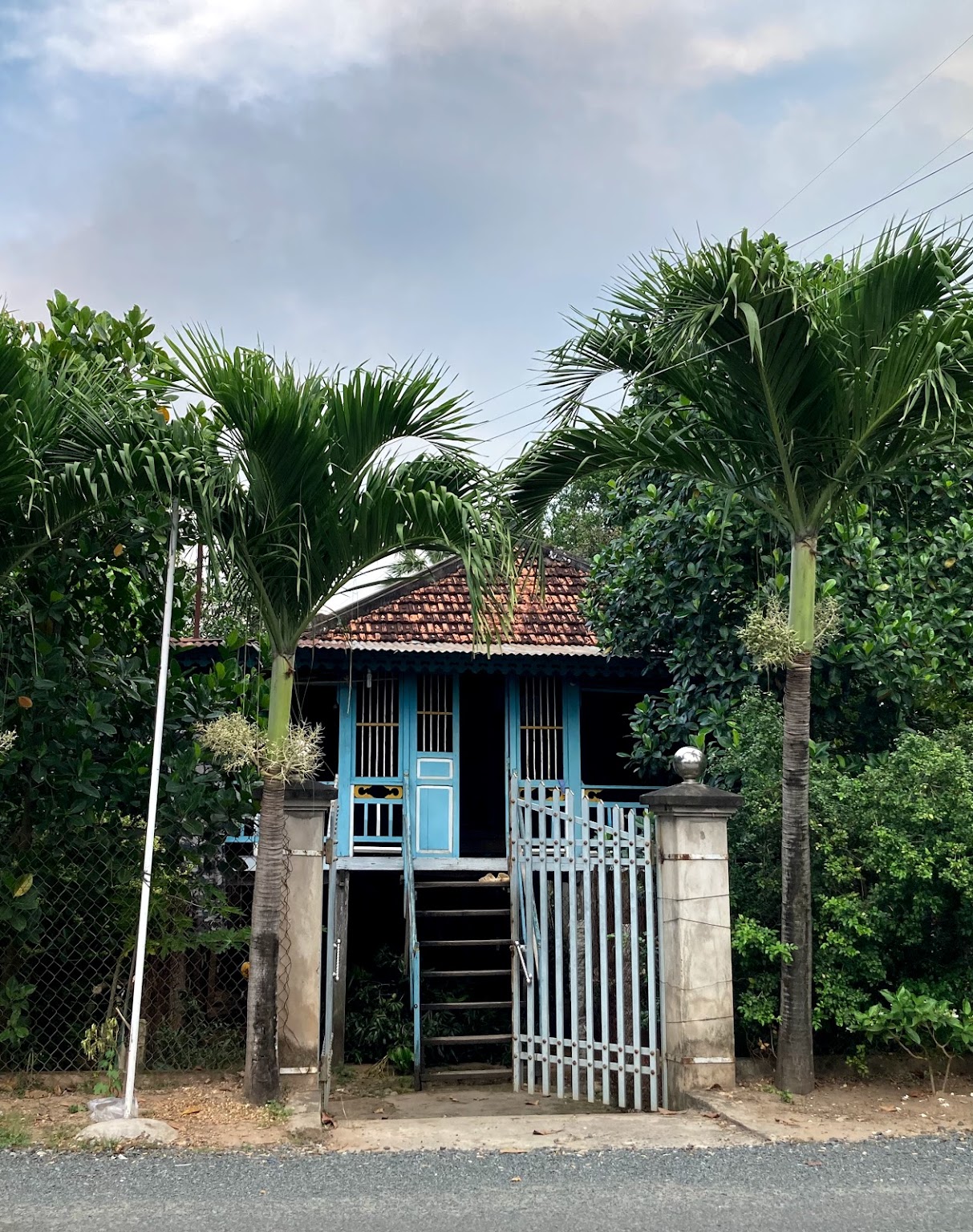 Many Chăm people in An Giang live in stilt houses like this.
Image credit: Nguyen Thanh Tam

The community was established in An Giang since the 1750s when General Nguyễn Cư Trinh called for the Chăm people in southeast Cambodia, at this time still part of the Nguyễn Dynasty’s territory, to settle down in this region.

After many political conflicts between Cambodia, Siam (known as Thailand today), and Đại Nam (Vietnam today), more Chăm people moved to An Giang province. This movement continued during the terrifying Khmer Rouge years (1975-79). Through the years, the Chăm community has gradually become an integral part of the population in An Giang. 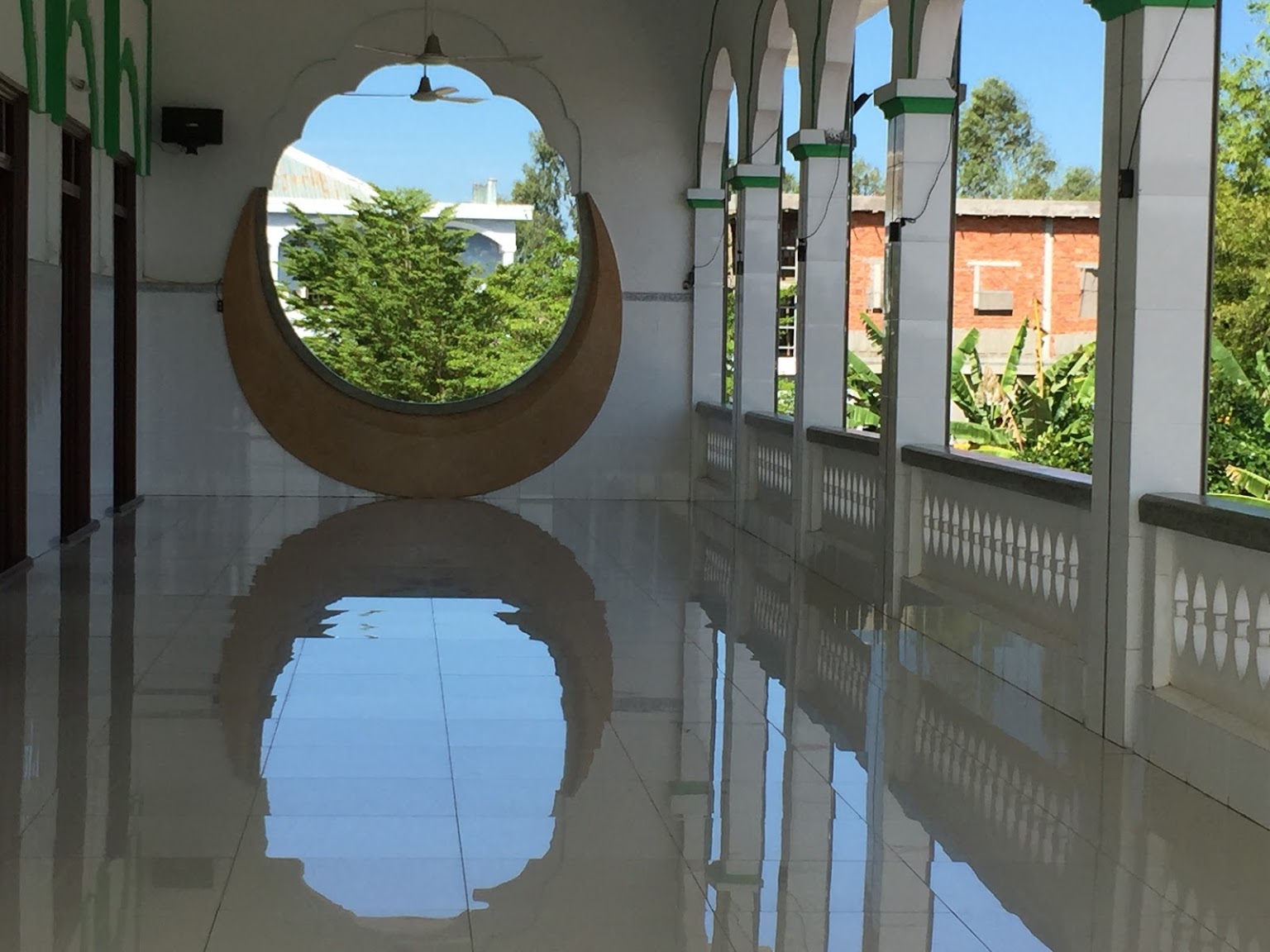 The corridor of a mosque in An Giang
Image credit: hợp phạm liên

According to the 2019 population census, Vietnam has about 71,000 Muslims. Among An Giang’s Chăm population of about 11,000 people as of 2019, most of them follow Islam, making it one of the biggest Muslim Chăm communities in Vietnam. 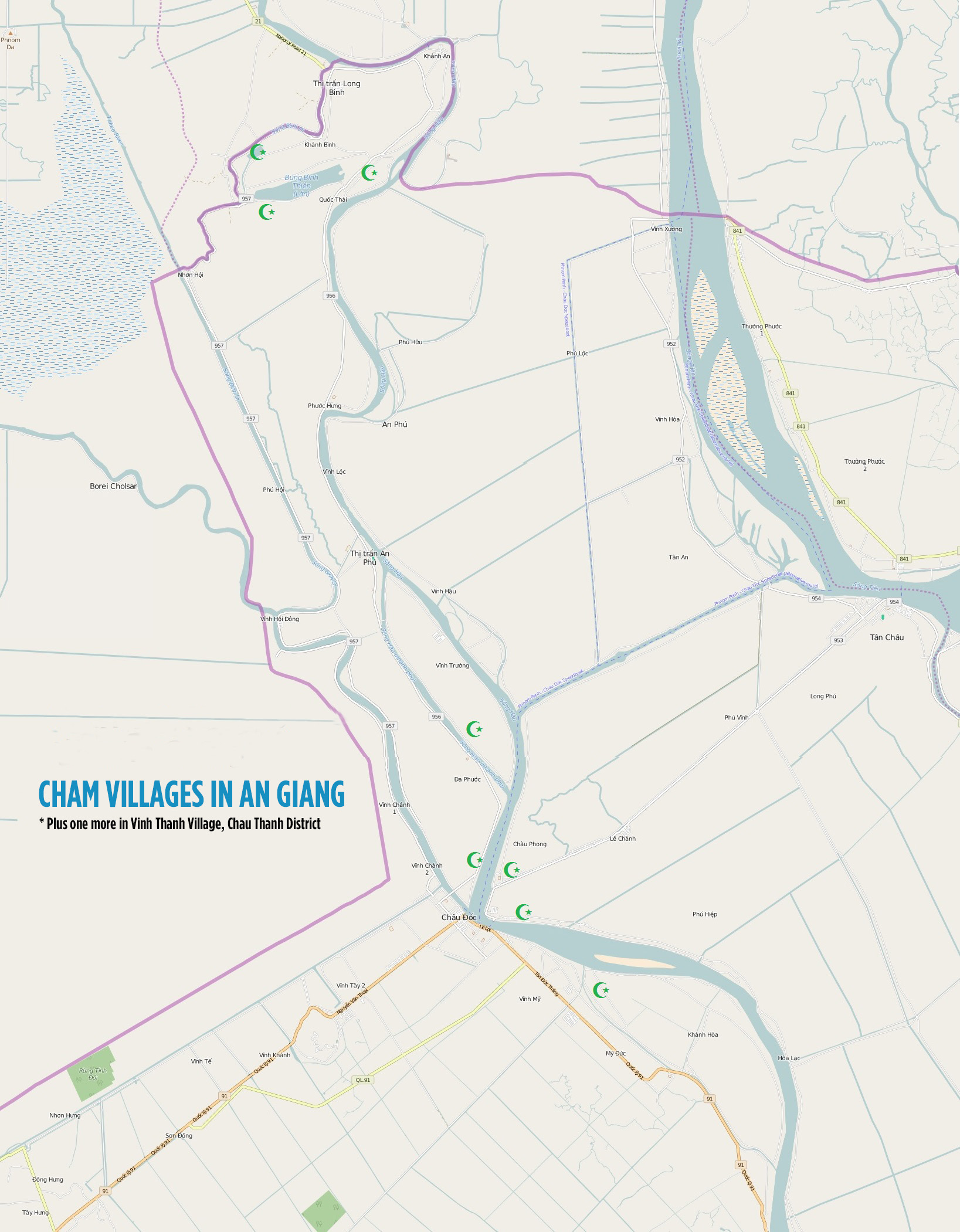 A map of Chăm villages in An Giang province. Each village is marked by a star and a crescent.
Image adapted from Mrfly911 / Wikimedia

Indeed, as Muslims, An Giang’s Chăm community practise Islamic obligations such as shahada (the declaration of faith that there is no deity except Allah, and that Muhammad is his prophet), salat (praying 5 times a day), zakah (almsgiving), rōzah (fasting during the month of Ramadan), and haji (making a pilgrimage to Mecca at least once).

In addition, they do not feed or eat pigs. Alcoholic drinks are a big no. Arabic classes are also open to help the younger generation learn about the Qur’an.

3. You can visit Mubarak Mosque, one of Vietnam’s oldest mosques 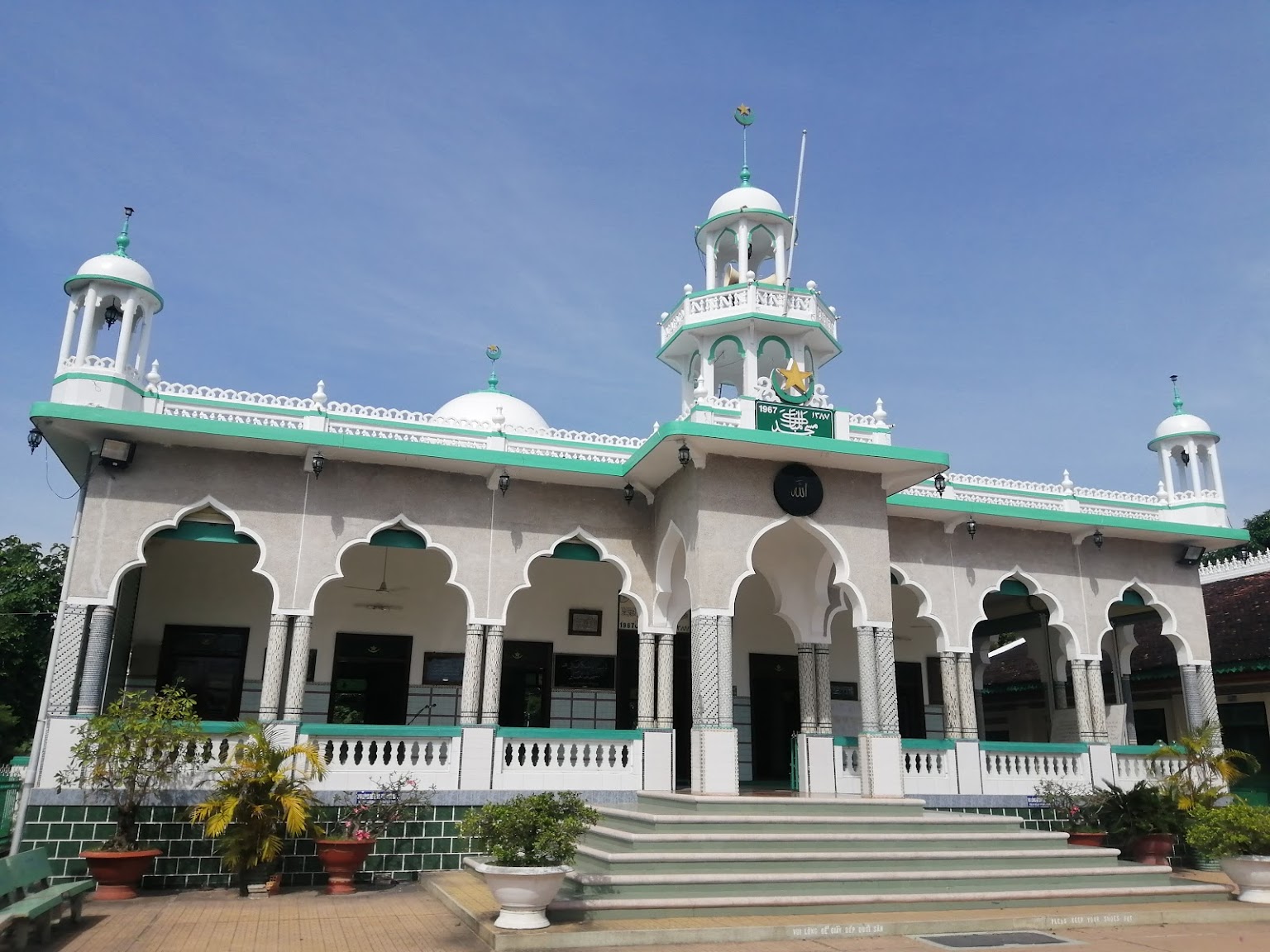 To serve the community, lots of mosques are situated in An Giang. In this province, you can find the oldest existing mosque in Vietnam, Mubarak Mosque.

Mubarak Mosque, situated in Châu Giang Chăm Village, was first built in 1750 with basic materials such as bamboo and leaves. It was then renovated in 1808, 1922, and 1965. The current mosque was based on a design by Indian architect Mohamet Amin that features an arched entrance, followed by a large yard.

On the roof is a little two-floor tower with two white domes behind it. Four smaller towers were also built on the corners of the mosque’s roof. In 1989, it was recognised as a National Historical Site. 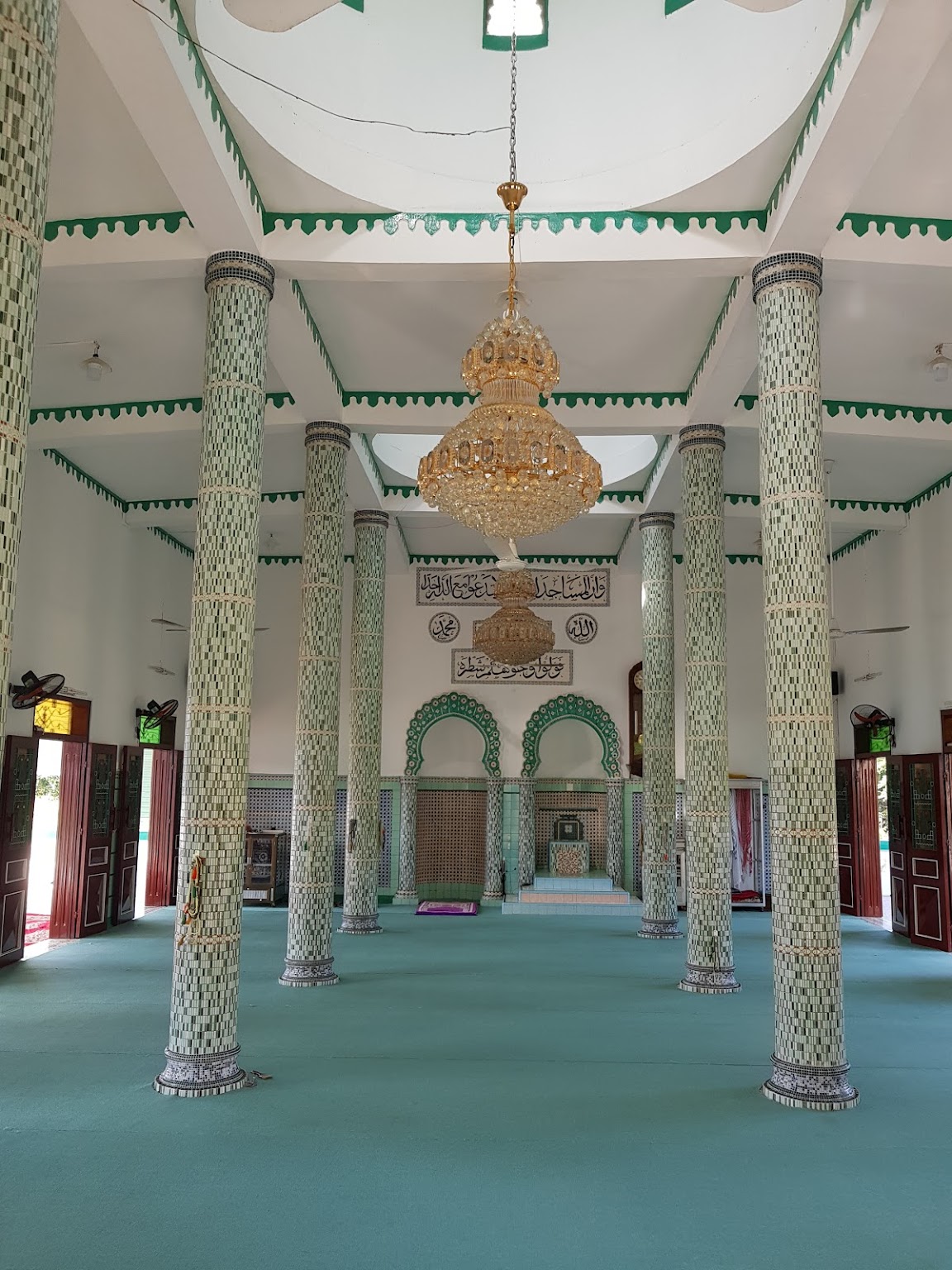 Mubarak Mosque is near the Bassac River, so you can take a river tour and stop at Tân Châu ferry station to visit it. 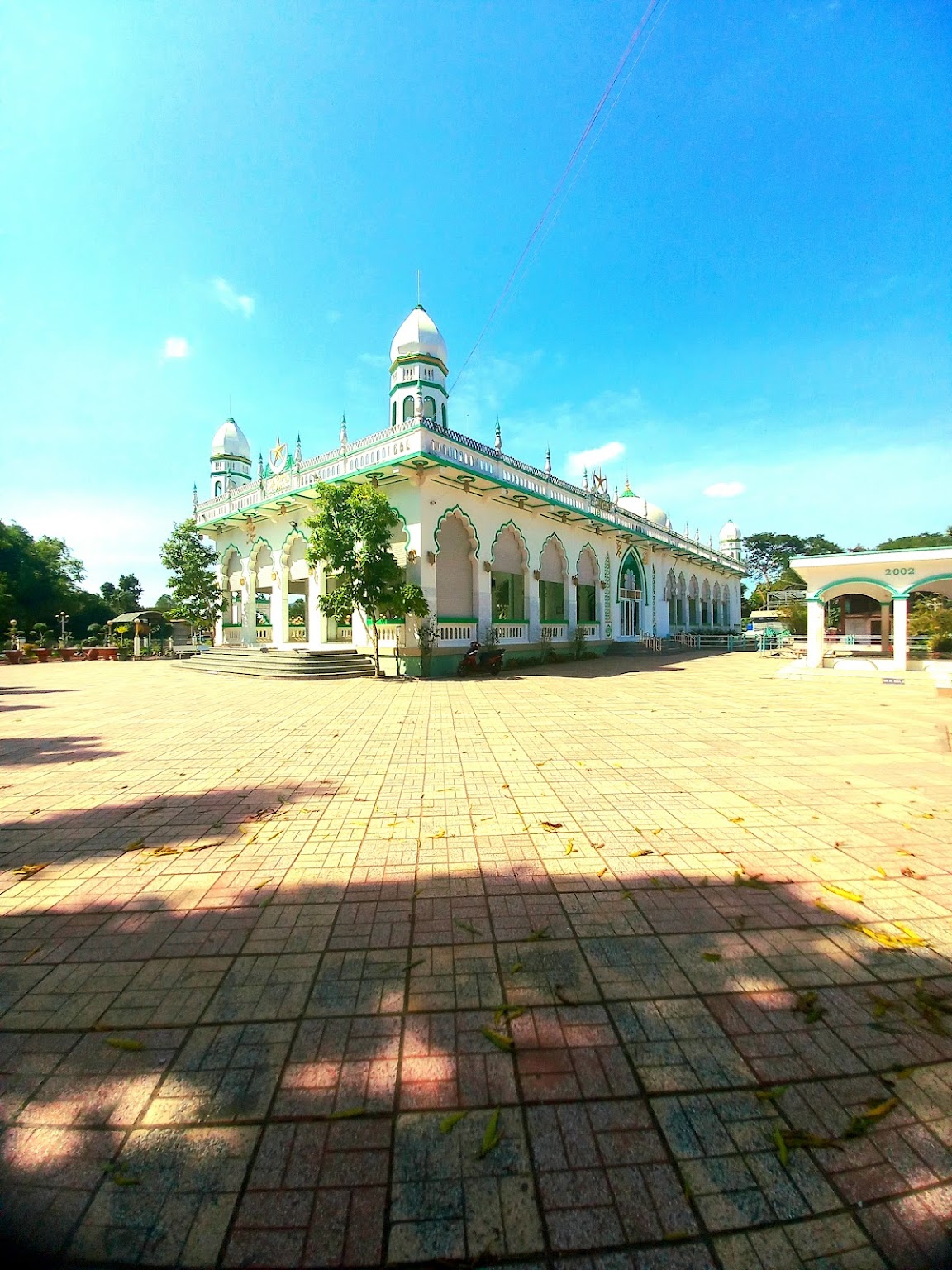 Even if you are not Muslim, Masjid Jamiul Azhar is still a beautiful place to visit.
Image credit: Lãng Khách Vi Hành

One of the most visited places in the Chăm community in An Giang is the beautiful Masjid Jamiul Azhar. This mosque was built in 1959 and renovated in 2012.

Featuring two main colours: white and emerald green, this is one of the most fabulous mosques in An Giang, giving off a pure and sacred impression. A long path connects the intricately decorated entrance to the main building of the mosque. On the sides are a giant graveyard, which makes this mosque distinctive from its counterparts in town. 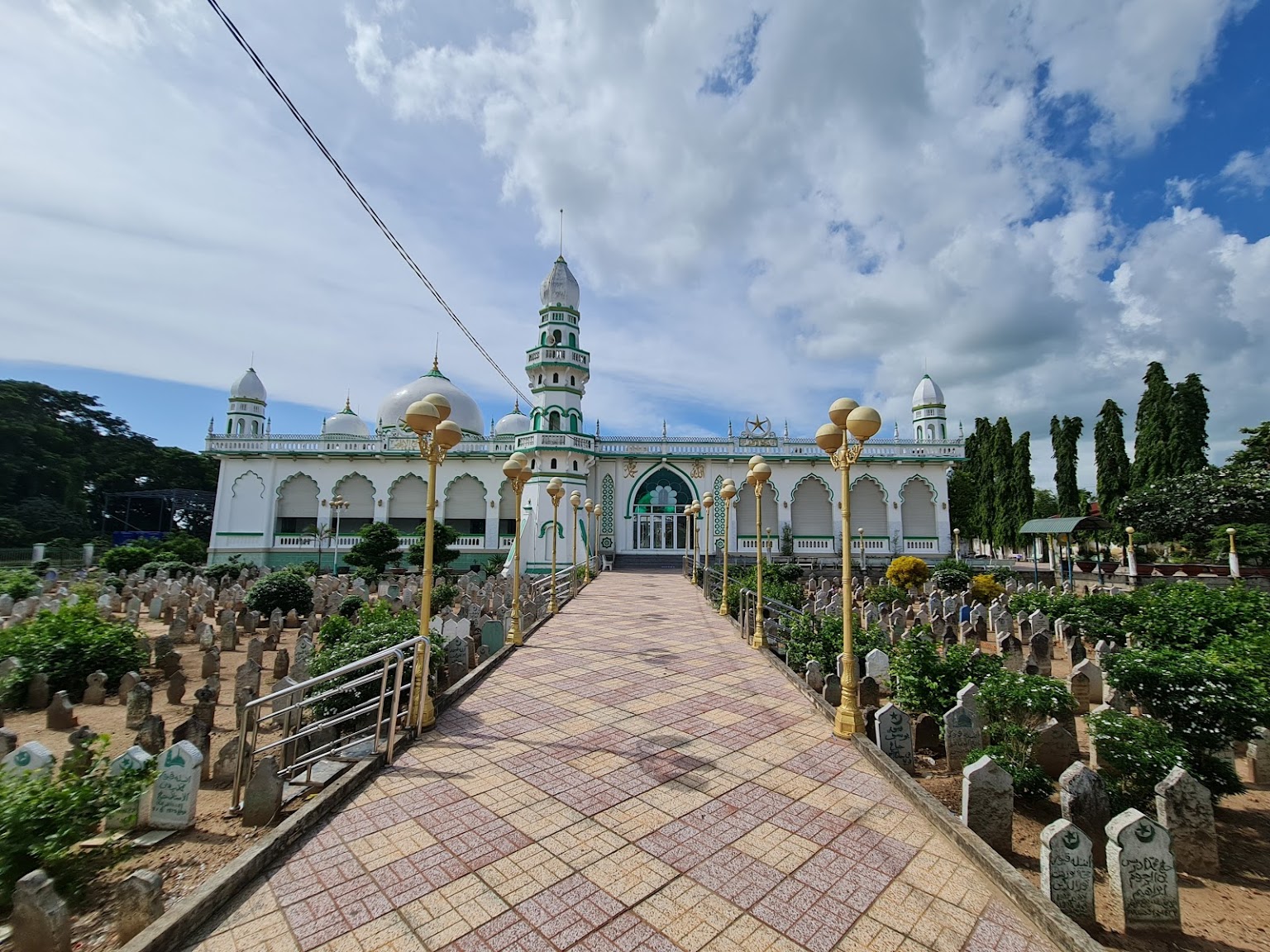 Masjid Jamiul Azhar is just about 800 metres from the Mubarak Mosque, so you can walk between the two locations in less than 10 minutes. From these mosques, you can access other Chăm attractions in Châu Phong and Đa Phước Chăm Villages easily by boat, car, or motorbike.

5. You can buy the beautiful Lãnh Mỹ A silk produced by the Chăm community here 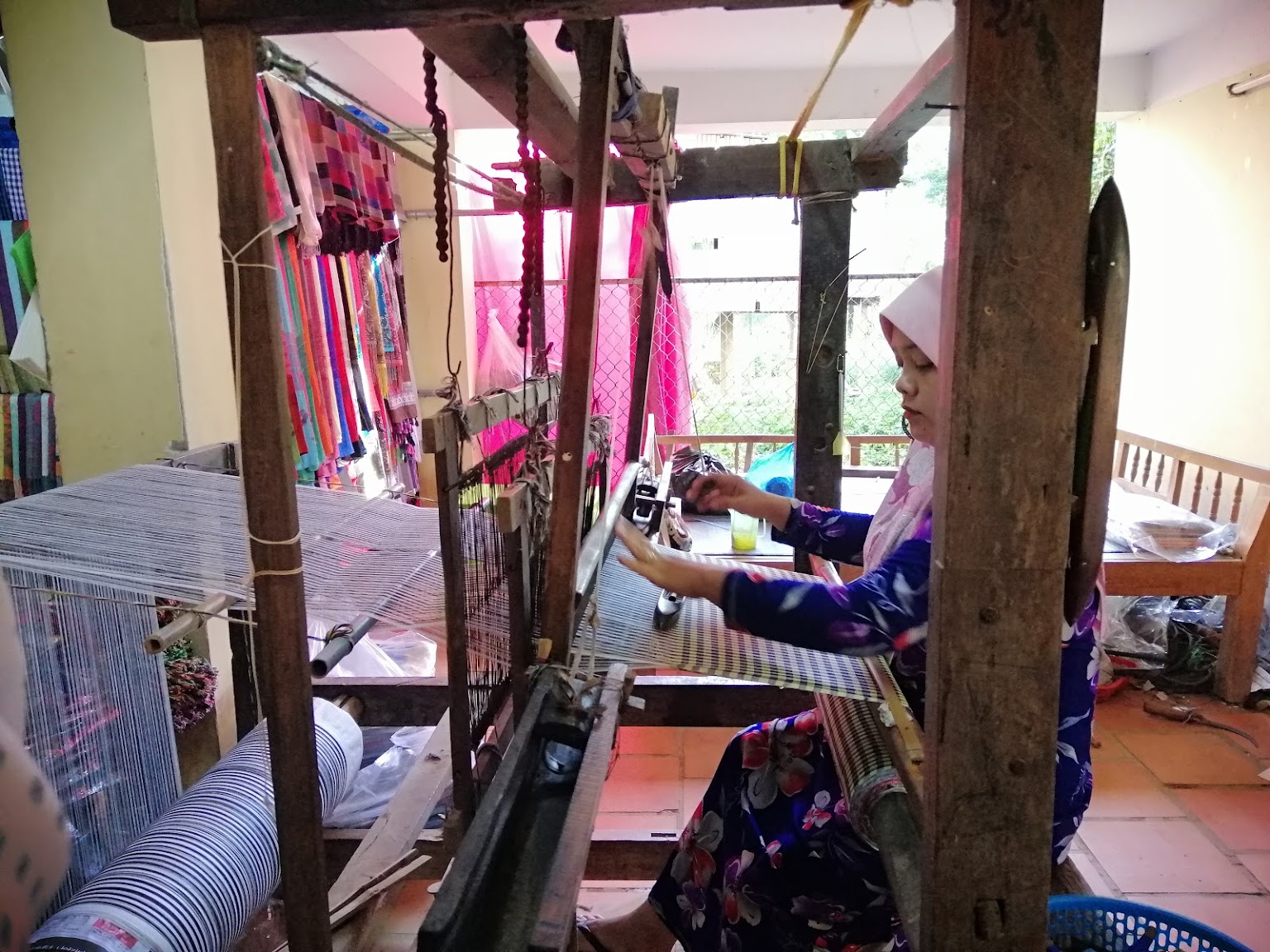 Visiting the Chăm community in An Giang, you can find Lãnh Mỹ A, a type of unique high-quality silk that has been sought after not only in Vietnam but around the world.

The traditional livelihood of the Chăm people is weaving. In the past, most families in the region had their own handlooms. Traditionally, girls aged 10 to 12 here started to learn basic weaving techniques. At the age of 18, they became sophisticated weavers.

Even today, lots of Chăm people in An Giang still make and sell fabrics. 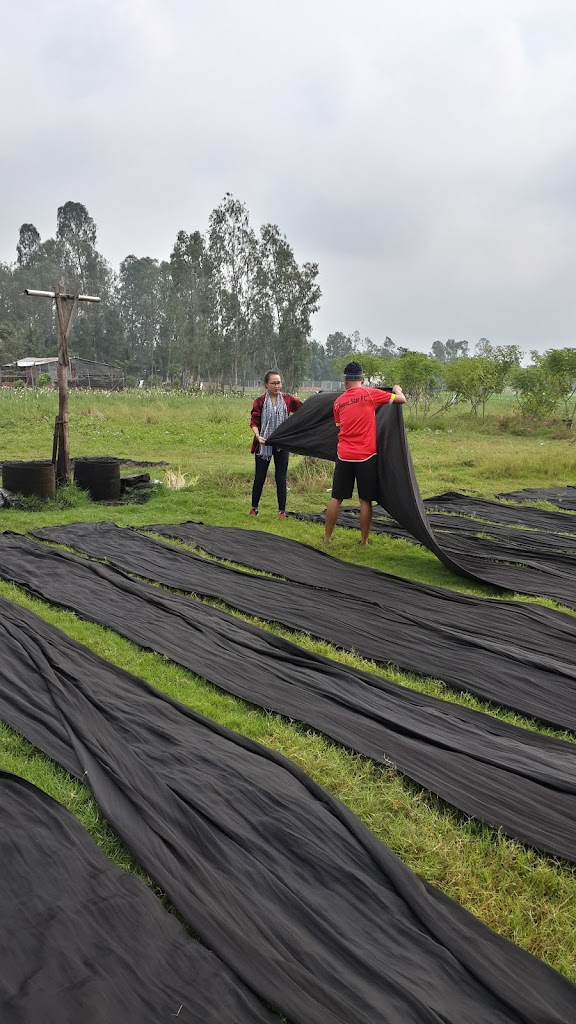 Despite the existence of modern weaving technology, An Giang’s Chăm community still prefers natural materials when they make high-quality patterned fabric. Among the local fabrics, Lãnh Mỹ A stands out as top-notch silk. Dubbed as “the queen of Vietnamese silk” that is “flowy in summer, warm in winter,” Lãnh Mỹ A is recognisable for its flashy black shade and extraordinary softness.

It has inspired many reputed fashion designers such as Võ Việt Chung, Nguyễn Công Trí, and Patrick Pham. Lãnh Mỹ A silk has also appeared in many haute couture events such as those in New York and Paris. 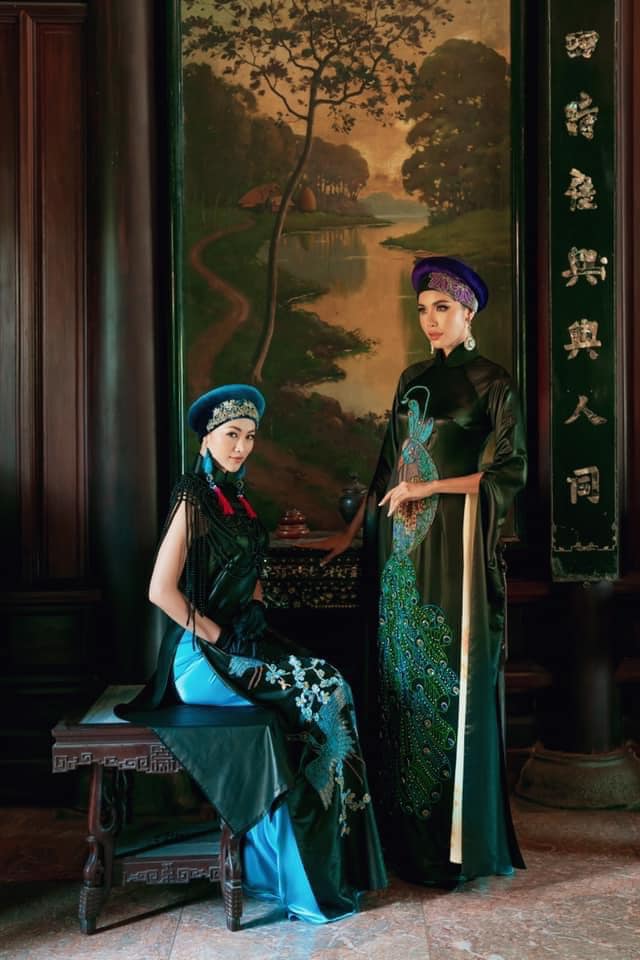 To make Lãnh Mỹ A silk, the craftsperson must weave it with a specific technique on a wooden handloom, use filaments from the silkworms, and most importantly, dye the silk many times with mặc nưa (Diospyros mollis) fruit essence. The result is exquisite silk, which may cost around USD200-300 per meter. 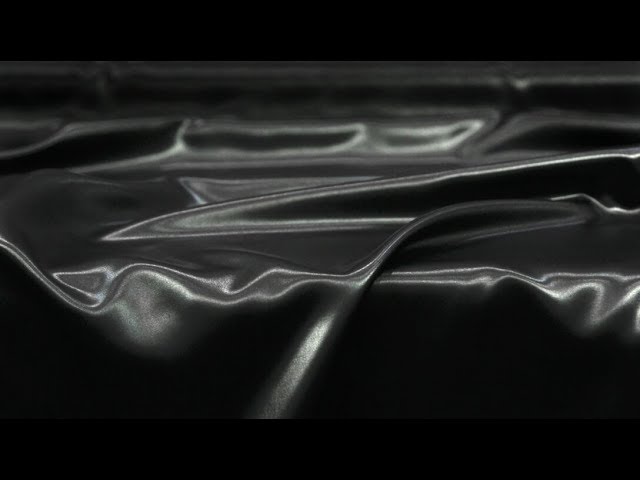 With the influence of modern cotton fabric and the shortage of mặc nưa fruits, Lãnh Mỹ A silk production has been on the brink of disappearance in recent years. You can give your support by purchasing it from the two silk stores listed below. 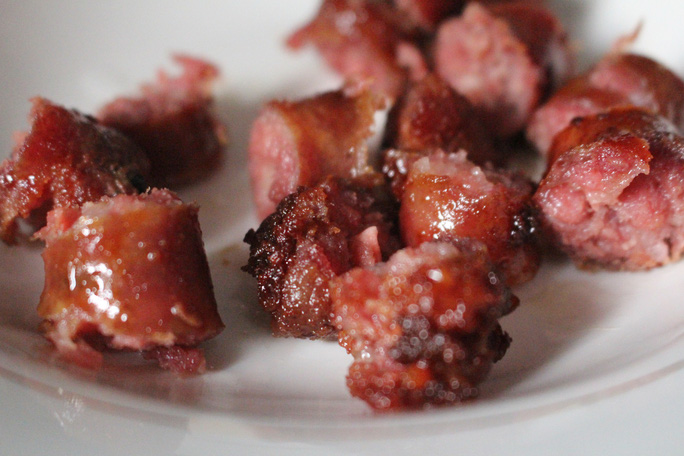 In An Giang, you will have the chance to try many special dishes of the Chăm community. As Muslims, the Chăm people only eat halal foods, but it doesn’t mean their cuisine is any less colourful. Among many specialities made with beef, tung lò mò or beef sausage is one of the most popular.

To make tung lò mò, Chăm people mix ground beef meat and fat in a ratio of 80:20. Then they season the mixture and stuff it into the cow’s intestines. The newly stuffed intestines will be dried in the early morning sunlight.

Once dried, tung lò mò can be kept in fridges for days. You can grill or fry tung lò mò with water for the best taste. Currently, there are many households that make and sell tung lò mò in An Giang. 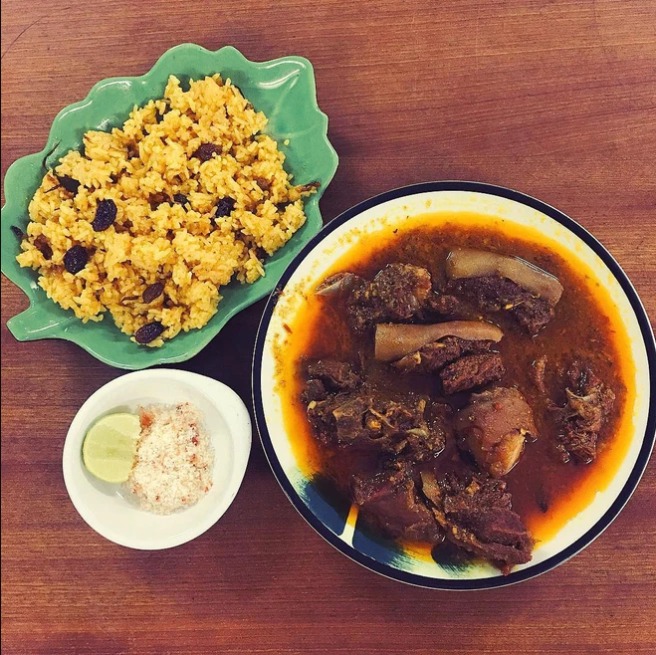 One of the most popular tung lò mò producers in An Giang is ANAS. You can drop by this food business to see the steps of making this speciality or buy some home.

7. Visitors are welcome but respect local customs and traditions 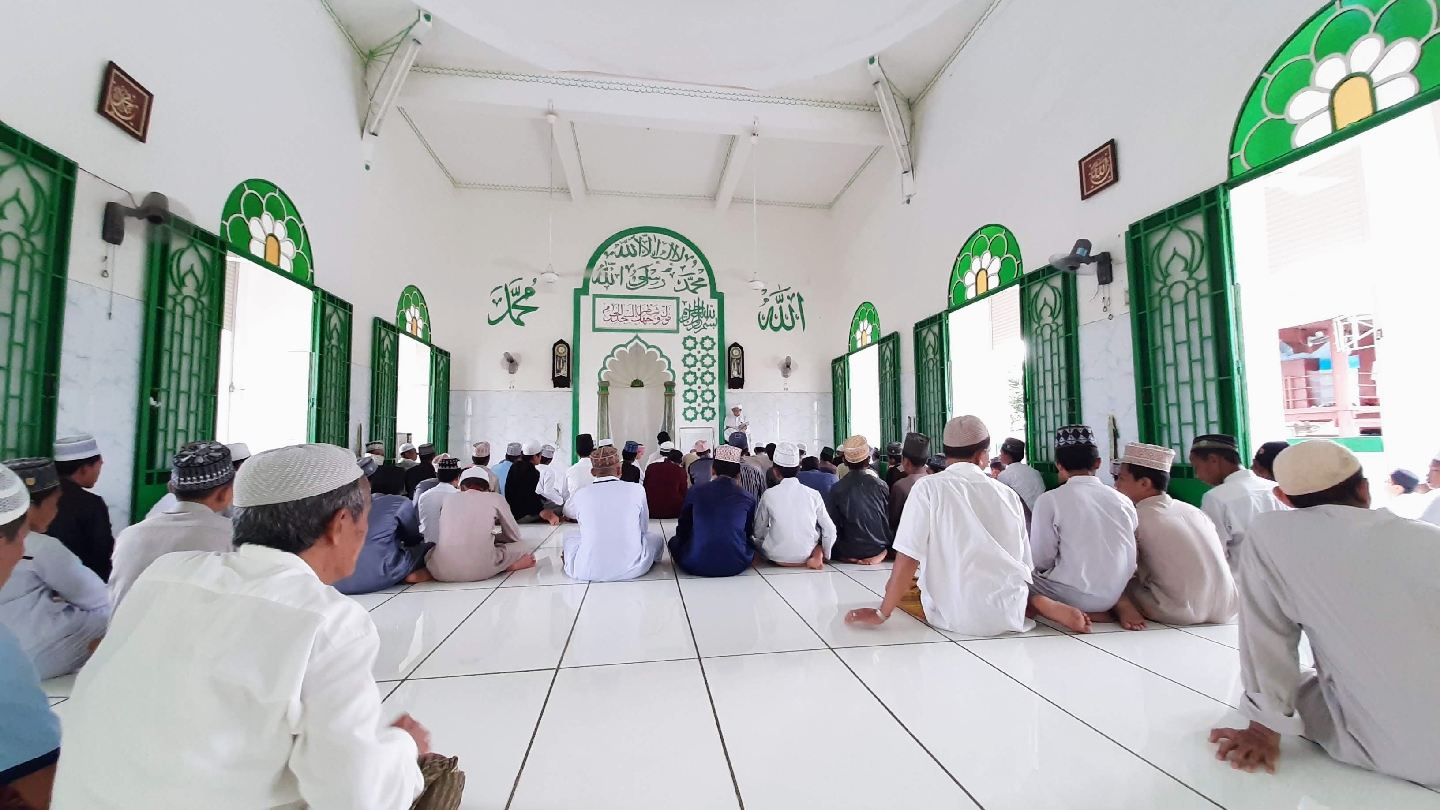 Women are not allowed to enter the mosque when the men are praying. You should also ask for permission before taking pictures like this.
Image credit: JAMIUL AZHAR MOSQUE

As the Chăm people in An Giang follow Islamic traditions, you should be aware of some guidelines when visiting.

Firstly, you should dress properly when visiting mosques. Girls and women are encouraged to tie their hair up and cover it with a scarf or hijab if possible. Taking pictures may also be prohibited. In addition, girls and women are not allowed to enter the mosques during the men’s prayer times.

Secondly, though the Chăm people are friendly, you should ask for permission before touching any of their clothing or possessions. Pulling others’ hijabs is a big no.

Apart from that, you should avoid standing too close to or having direct contact with unmarried Chăm women as this is against local customs.

If you are not sure about anything, don’t hesitate to check with your tour guides first.

The Chăm people in An Giang are a colourful community with many beautiful customs and traditions.

From Islamic practices to the silk weaving tradition to original cuisine, the Chăm people have become an essential part of the Mekong Delta, extending friendly hospitality when you come to visit them. 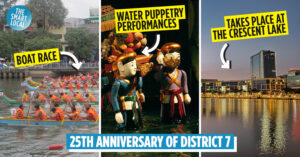 25th Anniversary of District 7 Takes Place Next Week, Join The Festival To Have Fun With The Locals
7 Saigon Landmarks That Are No More: From A French Priest's Vietnamese Tomb To Imperial... 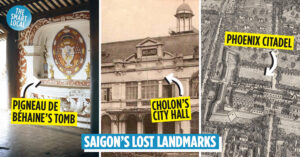