Hồ Chí Minh City, or Sài Gòn, has been populated for 400 years. Though much younger than Hà Nội or Đà Nẵng, the city has been through many changes and developments. That’s why many Saigon landmarks have interesting pasts that might surprise you.

In this piece, we have gathered 7 popular landmarks in Hồ Chí Minh City that might leave you in awe about what they were in the old days. Some details are collected from the book Sài Gòn Then & Now – Early 20th & 21st Century (Sài Gòn Then & Now – Sài Gòn Hai Đầu Thế Kỷ). 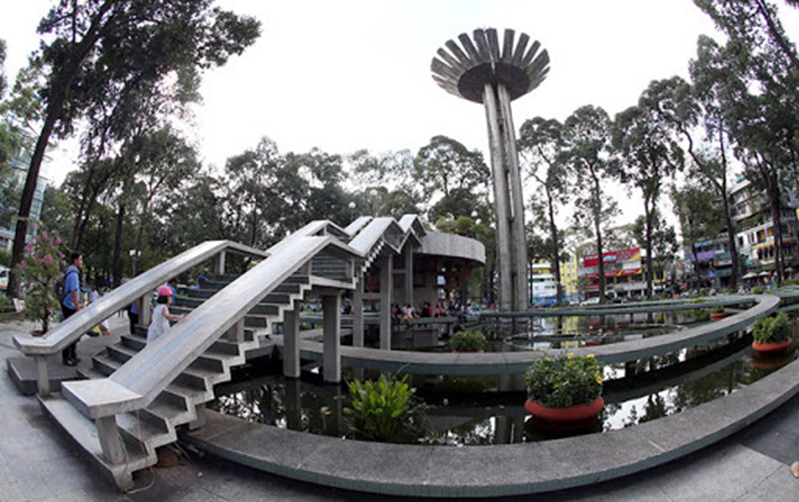 Hồ Con Rùa (Turtle Lake) is the unofficial name of an artificial lake in District 3. This is a common night hangout spot for teenagers, with lots of street food stalls and cafes. 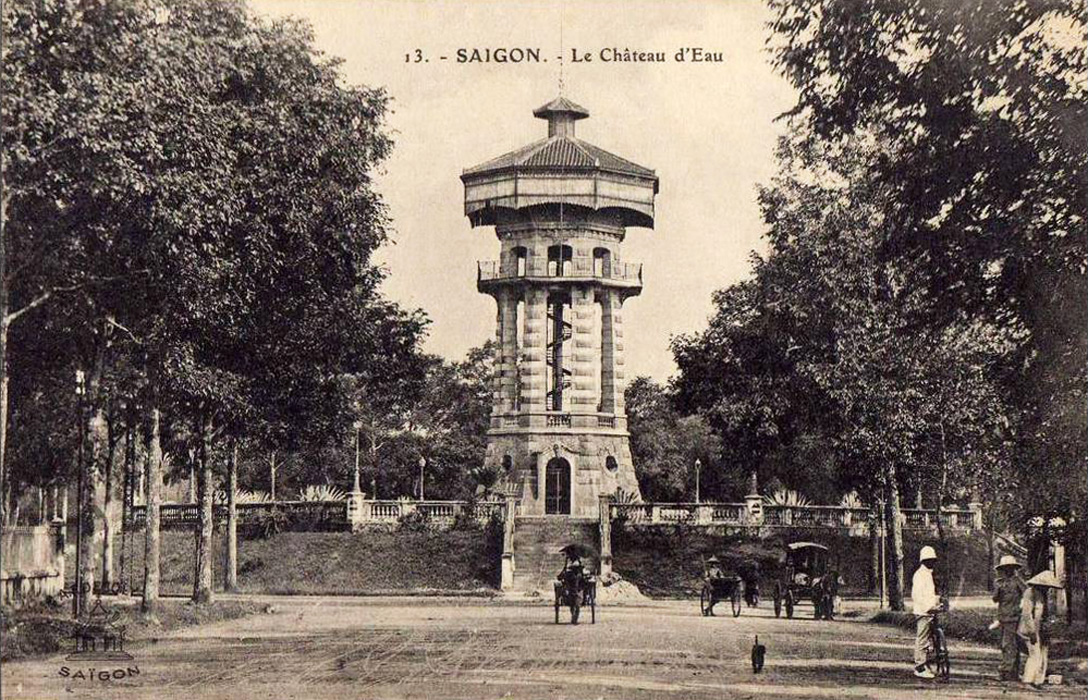 Around the 1870s, on the site of Turtle Lake, once stood the first water tower of Sài Gòn.
Image credit: manhhai

Back in 1862, after the French had taken control of the city, they started replanning the area, making the appearance of colonial architecture across Saigon.

In 1878, a water tower was built on the site of what is now Turtle Lake to provide water for the whole city. It was not until 1921 that the tower was destroyed because of its inability to meet the increasing water demand in the city. After that, at the same location, the French erected a monument honouring their martyrs in the First World War. 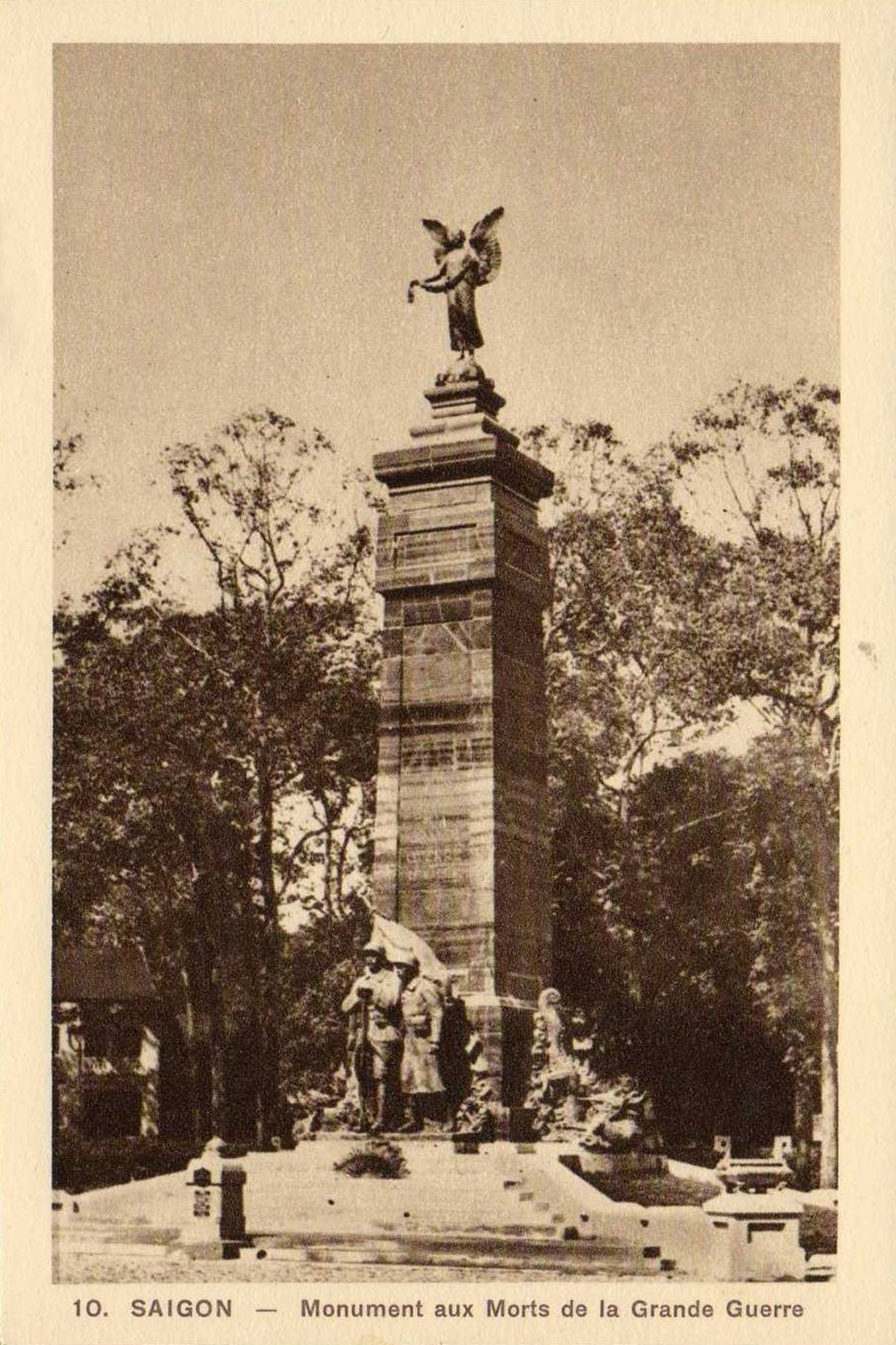 After the French left Vietnam, the South Vietnamese government knocked down the monument, then replaced it with a small lake in the 1960s. In this lake, there used to be a bronze turtle carrying a stele (stone slab) on its back like those in the Temple of Literature in Hà Nội. Though the statue was no more, people still call the place Turtle Lake. 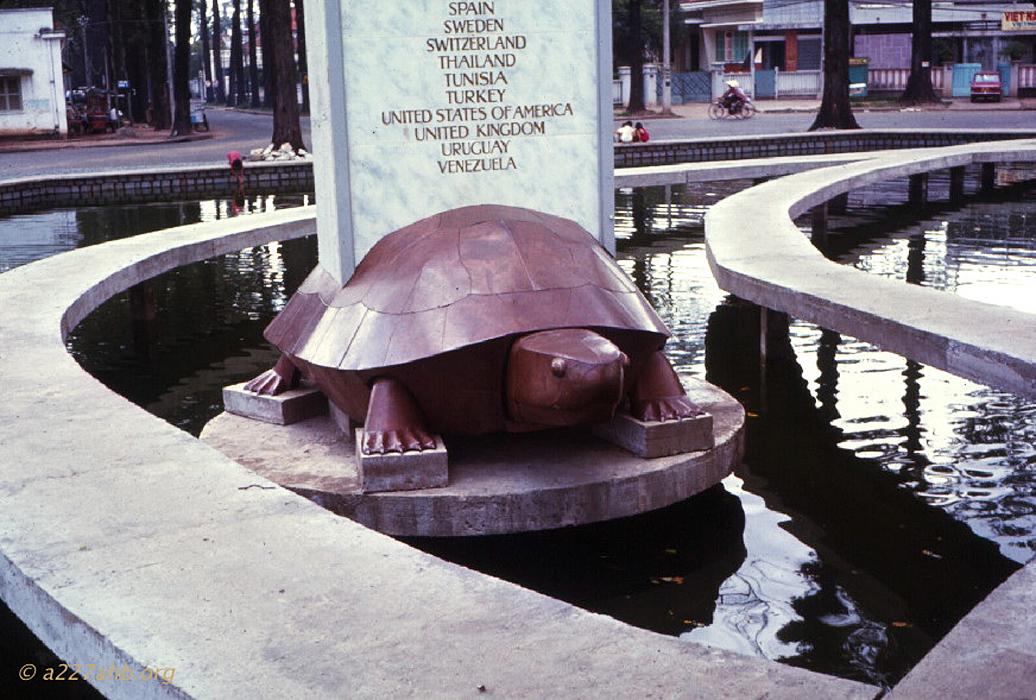 The turtle carrying the stele in the Turtle Lake. This statue was destroyed in the 1970s for unclear reasons.
Image credit: manhhai 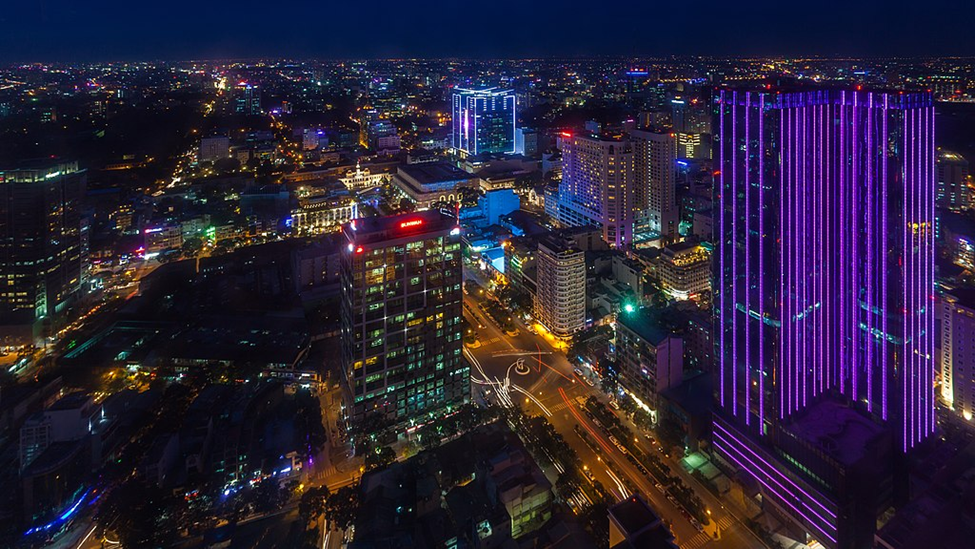 Nguyễn Huệ Walking Street is among the most visited places in Hồ Chí Minh City. Actually, it was only recently transformed into a walking street in 2015. Previously, it was a crowded street stretching from the City Hall to Bạch Đằng Wharf. 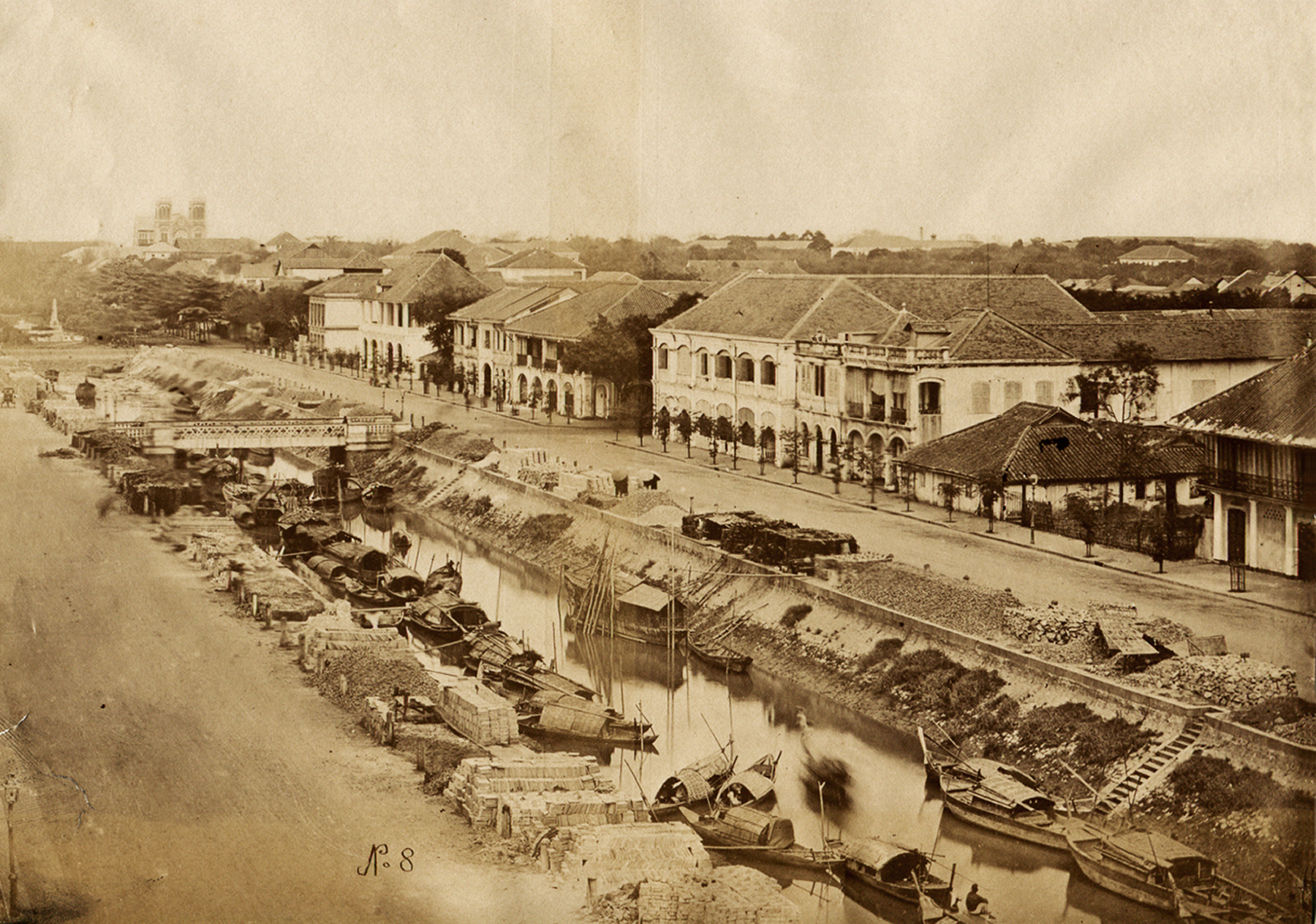 Local people often called this canal Kinh Lớn (The Grand Canal). As this picture was taken in the 1880s, the City Hall was not there yet, but you can see the top of the newly completed Saigon Notre Dame Cathedral on the horizon.
Image credit: manhhai

Originally, Nguyễn Huệ Street was a canal excavated at Emperor Gia Long’s behest to bring water from the Sài Gòn River to smaller moats around Turtle Citadel, which was razed to the ground in 1835.

At that time, people gathered along the two banks of this canal to exchange goods. This canal was not only adjacent to the Sài Gòn River but also linked to Tàu Hủ and Bến Nghé Canals, where Chinese-Vietnamese merchants prospered. That’s why the canal became a crowded marketplace. 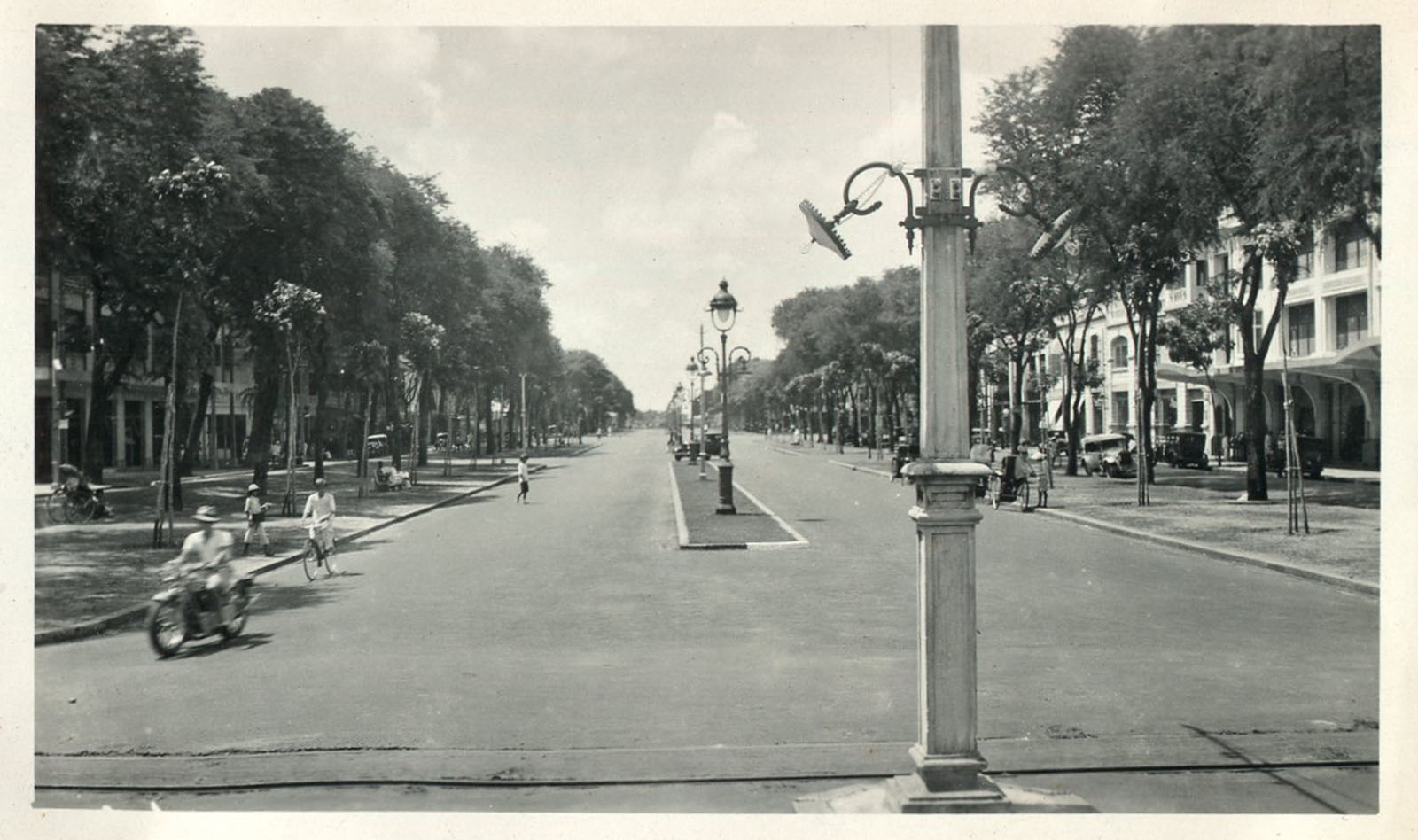 The canal was filled up and turned into Boulevard Charner. This was how the boulevard looked in the 1930s.
Image credit: manhhai

In 1887, the French made the bold move of filling the canal and turning it into a broad boulevard named Charner. A city hall was also built on one end of the boulevard. It was not until 1956 that the boulevard got its current name. 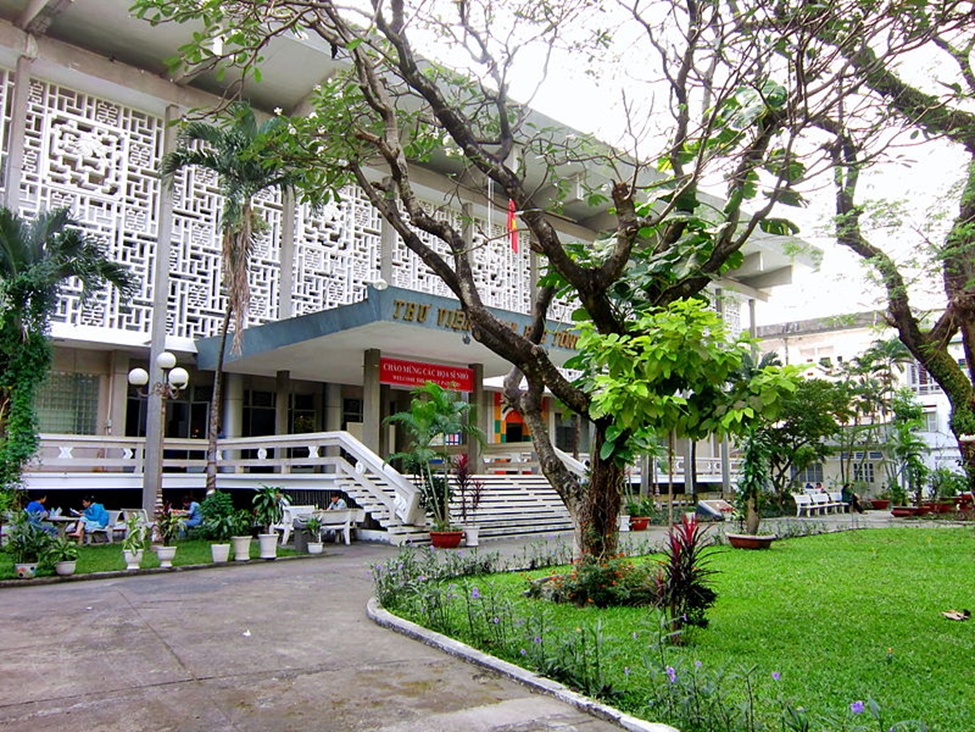 With 16 floors storing 500,000 titles and 300,000 newspapers and magazines, the General Sciences Library of Hồ Chí Minh City is a great choice for any book lover in the city. However, even regular readers at this library may be surprised at the fact that this site used to be a scary prison. 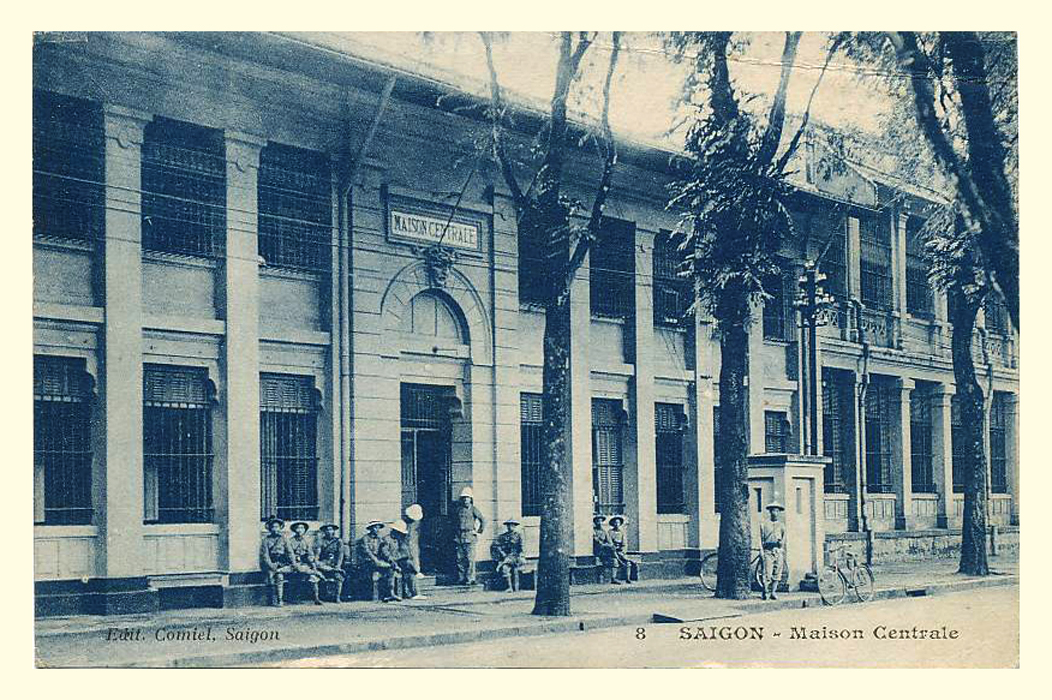 The road in front of the General Sciences Library of Hồ Chí Minh City’s present location is named after Lý Tự Trọng, who was imprisoned and executed in the Maison Centrale.
Image credit: manhhai

Back in 1886, the French colonial government kickstarted the construction of the Maison Centrale (French for Central Prison), also known as Khám Lớn among the Vietnamese. The building was completed in 1890. The prison also had a guillotine for early morning executions.

Though building a prison in the city centre seemed unusual, the Maison Centrale was actually opposite the City Court, making it easier for the French to escort prisoners between the two buildings. 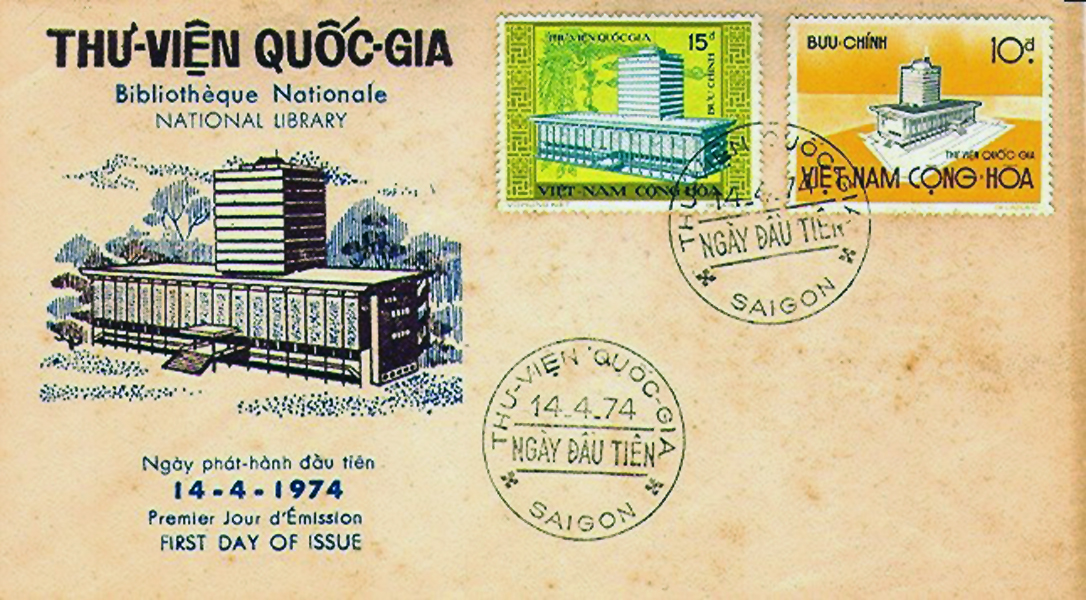 A South Vietnamese postcard with a drawing of the National Library.
Image credit: manhhai

After many historical events, the prison was completely demolished under the South Vietnamese regime to make room for Đại học Văn khoa Sài Gòn (Saigon Faculty of Arts). In 1963, the institution was moved to a new location. This location became the site for the National Library. From 1975, it was renamed the General Sciences Library of Hồ Chí Minh City.

4. Hồ Chí Minh City Stock Exchange – from the Commercial Chamber to the seat of the South Vietnamese Senate 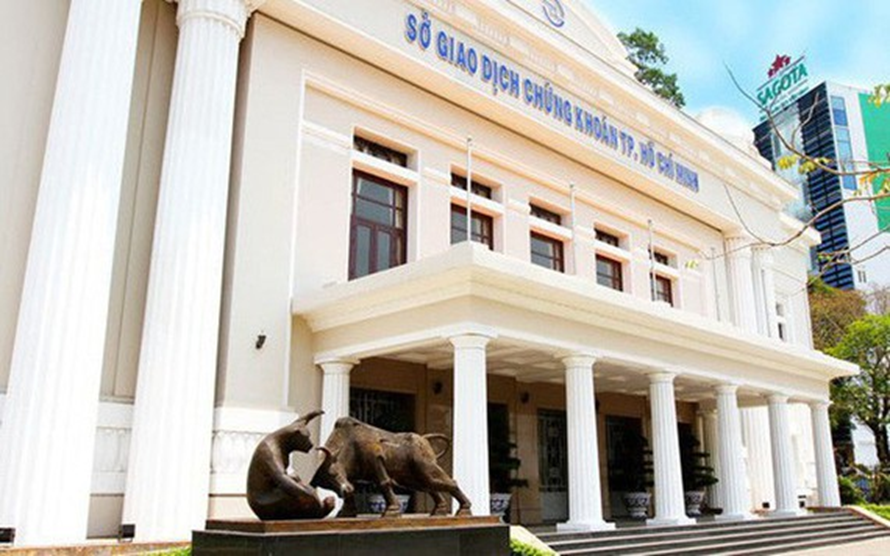 Hồ Chí Minh City Stock Exchange is situated on the beautiful street of Võ Văn Kiệt, looking out Tàu Hủ Canal. You can easily recognise it thanks to a statue of a water buffalo wrestling with a bear in front of it. 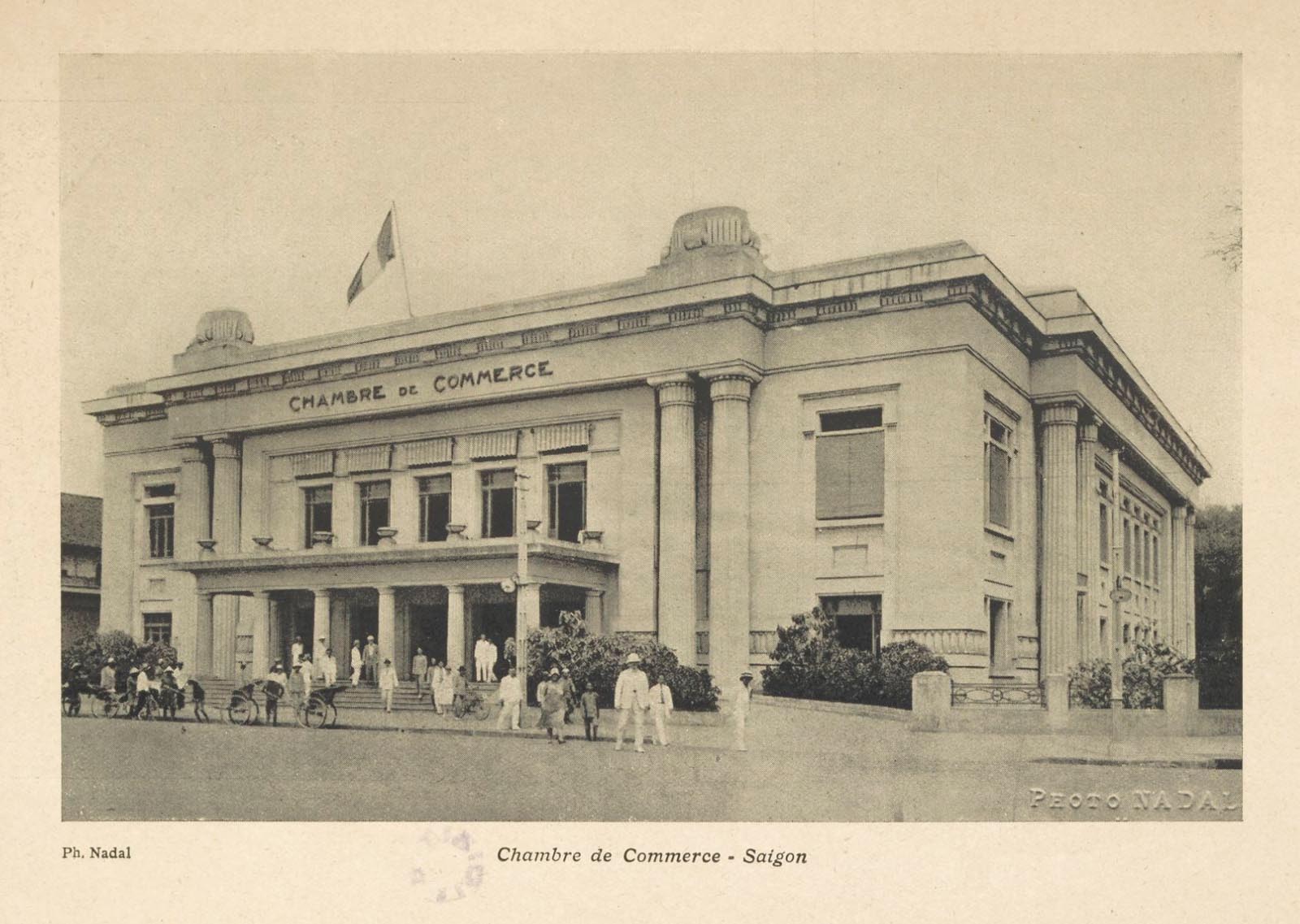 This Chambre de Commerce was the second commercial chamber in Saigon. A smaller one had been built at what is now Mê Linh Roundabout.
Image credit: manhhai

This place was among the first palace buildings in southern Vietnam. It was first mentioned in official records on 5th June 1934 by the name of Chambre de Commerce (Commercial Chamber). 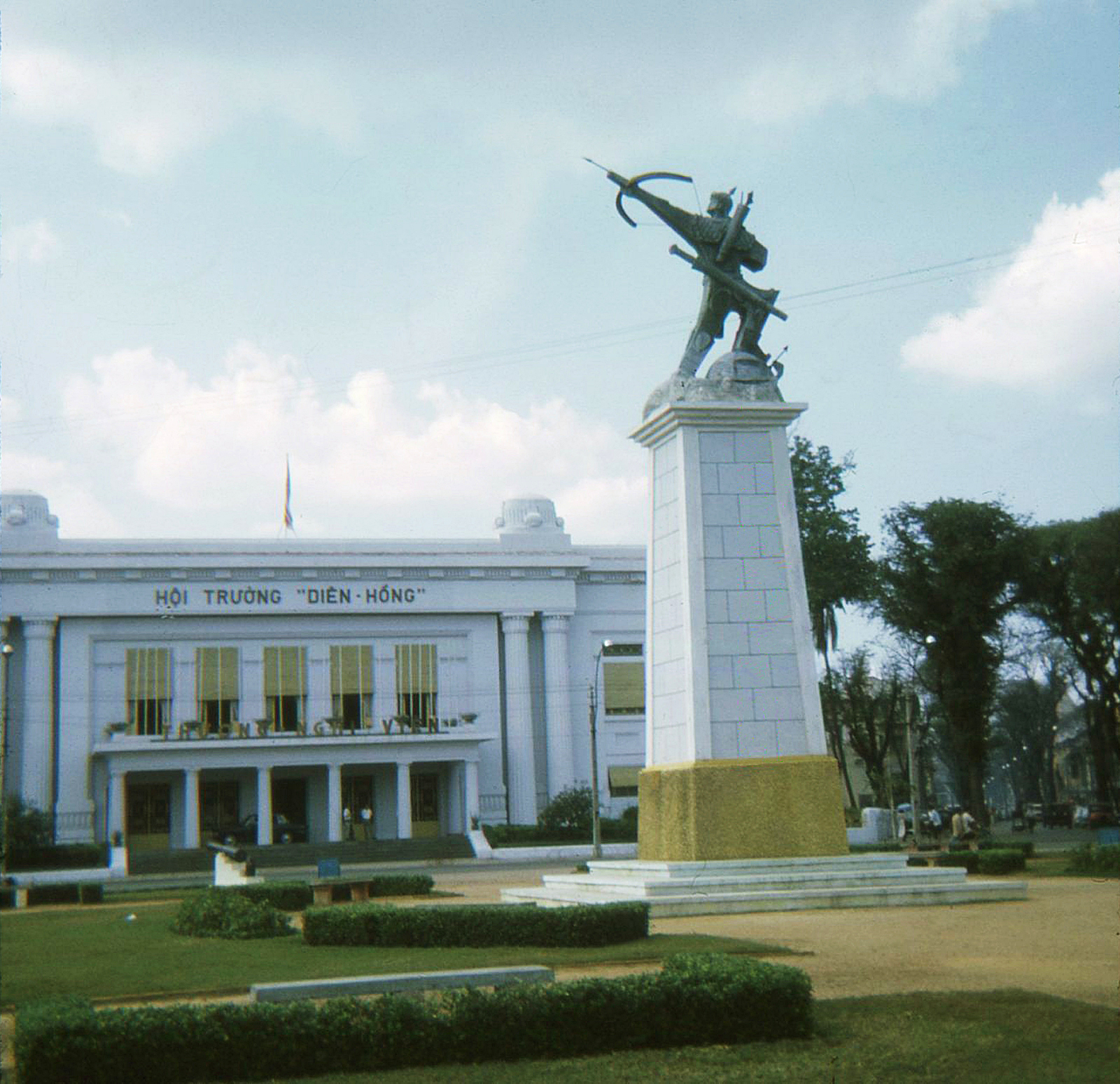 There used to be a statue of An Dương Vương, a Vietnamese ancient king, in front of the Diên Hồng Hall. This statue is now exhibited in Hồ Chí Minh City Museum of Fine Arts.
Image credit: manhhai

It was the center of the city’s trading activities until 29th June 1957, when it was renamed Hội trường Diên Hồng (Diên Hồng Hall) under the South Vietnamese regime. From 1967 to 1975, it also functioned as the Senate’s building.

From 1975, it became the stock exchange. You can spot it in the opening scene of Francis Ford Coppola’s movie Apocalypse Now (1979).

5. Saigon Opera House – once the seat of the South Vietnamese House of Representatives 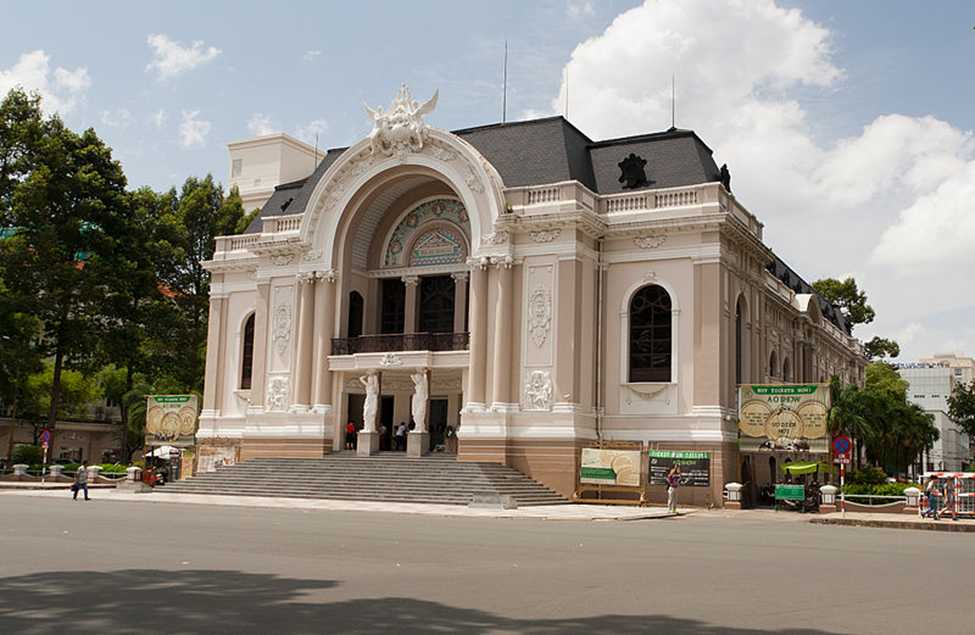 Situated on Lam Sơn Roundabout and adjacent to remarkable hotels like Caravelle and Continentale, the Sài Gòn Opera House is a frequently visited place in Hồ Chí Minh City. Apart from its classical aesthetics, this building also has a significant historical background. 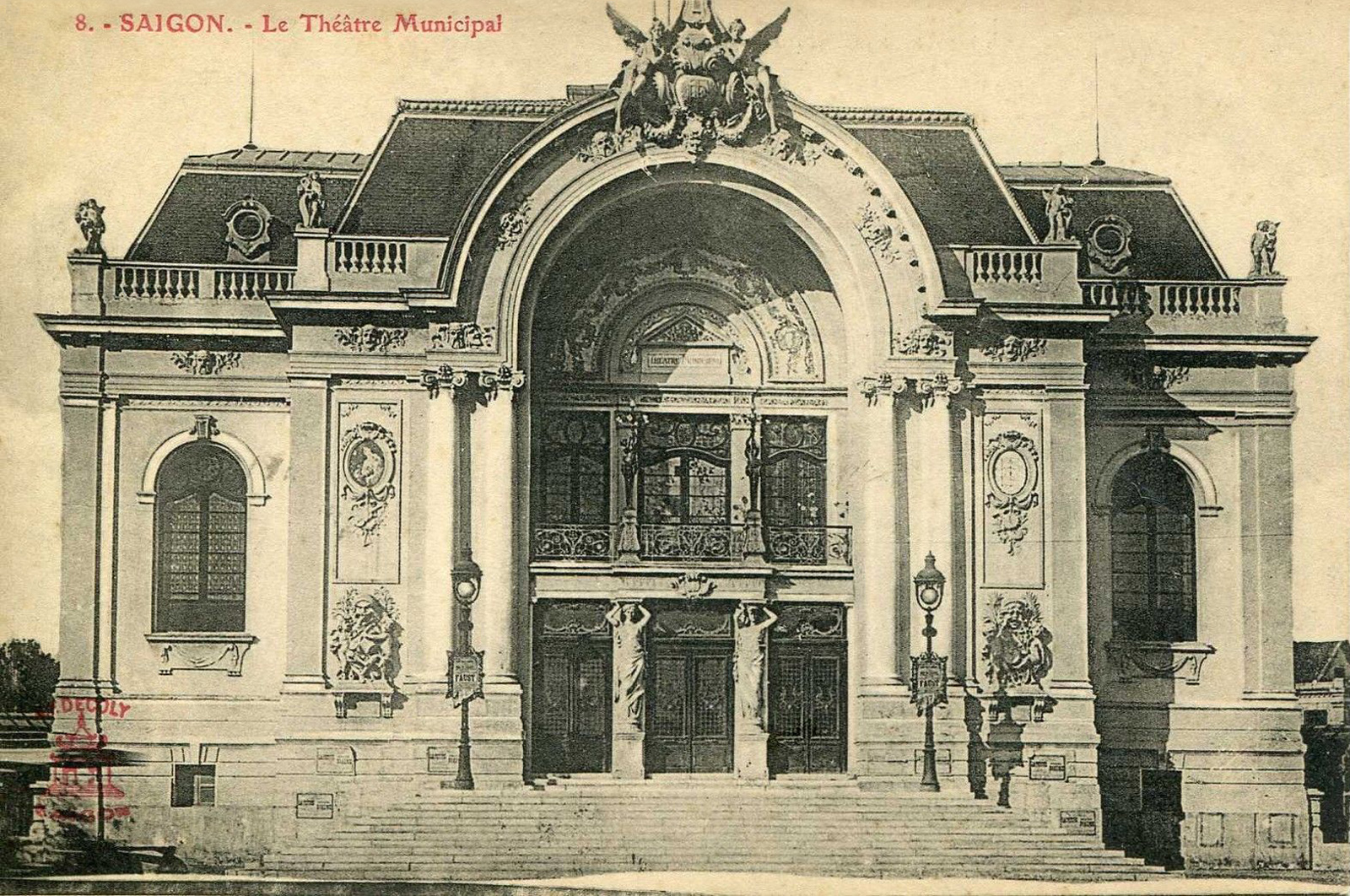 The original Municipal Theatre looked ornate with murals, reliefs, and caryatids. This theatre and the Garnier Square in front of it served as the location for the climax of Graham Greene’s novel The Quiet American.
Image credit: manhhai

In 1863, they invited a group of musicians to perform at the Place de l’Horloge whose location is now known as the Nguyễn Du – Đồng Khởi Corner. Soon, a temporary theatre was built there, near the Caravelle Hotel.

In 1898, a new theatre was built on this site and was completed in 1900. Heavily influenced by Neo-Baroque architecture, the facade of this theatre was similar to that of the Petit Palais in Paris. 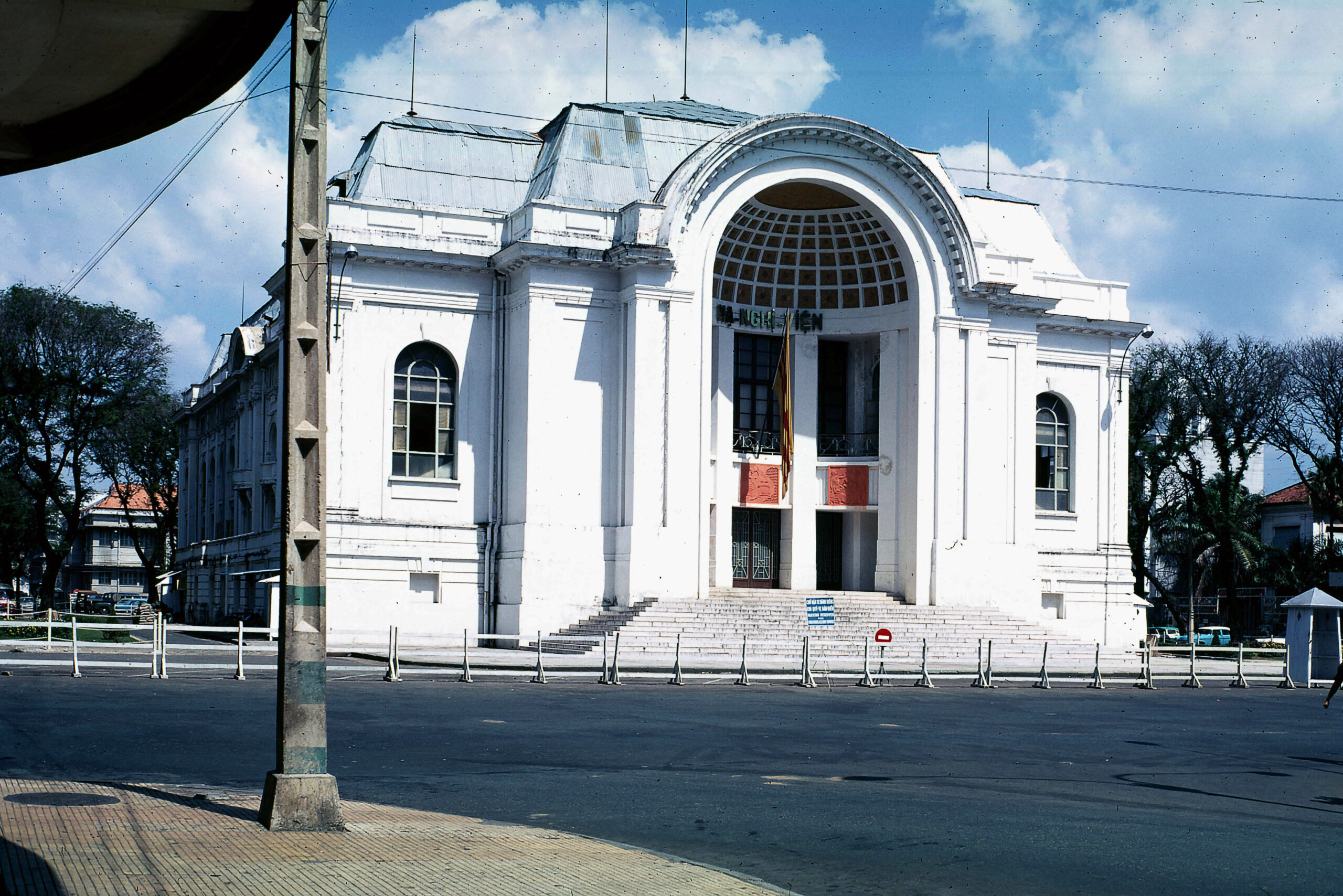 Under the South Vietnamese regime, the building gave an Art Deco impression, which was much cleaner than its original look.
Image credit: manhhai

In 1955, the South Vietnamese government restored the theatre after it had been damaged by aerial attacks. It was then used as the building of the House of Representatives. Through the years, many reliefs and decorations, especially the Art Nouveau mural under the dome, were removed or covered, giving the theatre an Art Deco appearance.

After 1975, it became a theatre again. On the 300th anniversary of this theatre in 1998, some decorations on the facade were also restored to match the original designs. You can take a look at the upcoming shows of this theatre on the official website of the Hồ Chí Minh City Ballet and Symphony Orchestra, and visit it for yourself.

6. Sun Wah Tower – once the site of the first church in Saigon

At the time of completion, the Sun Wah Tower used to be the highest building in Vietnam. The clock roundabout in front of it has been removed to make room for musical fountains.
Image credit: Diego Delso/Wikimedia Commons

At the corner of Nguyễn Huệ and Mạc Thị Bưởi Streets, you can spot the 25-storey Sun Wah Tower.  Before it was completed in 1995, this site had been the location of the La Justice de Paix (The Reconciliation Court).

In the early 1990s, the French government used to have a guillotine in front of this court to execute prisoners publicly. 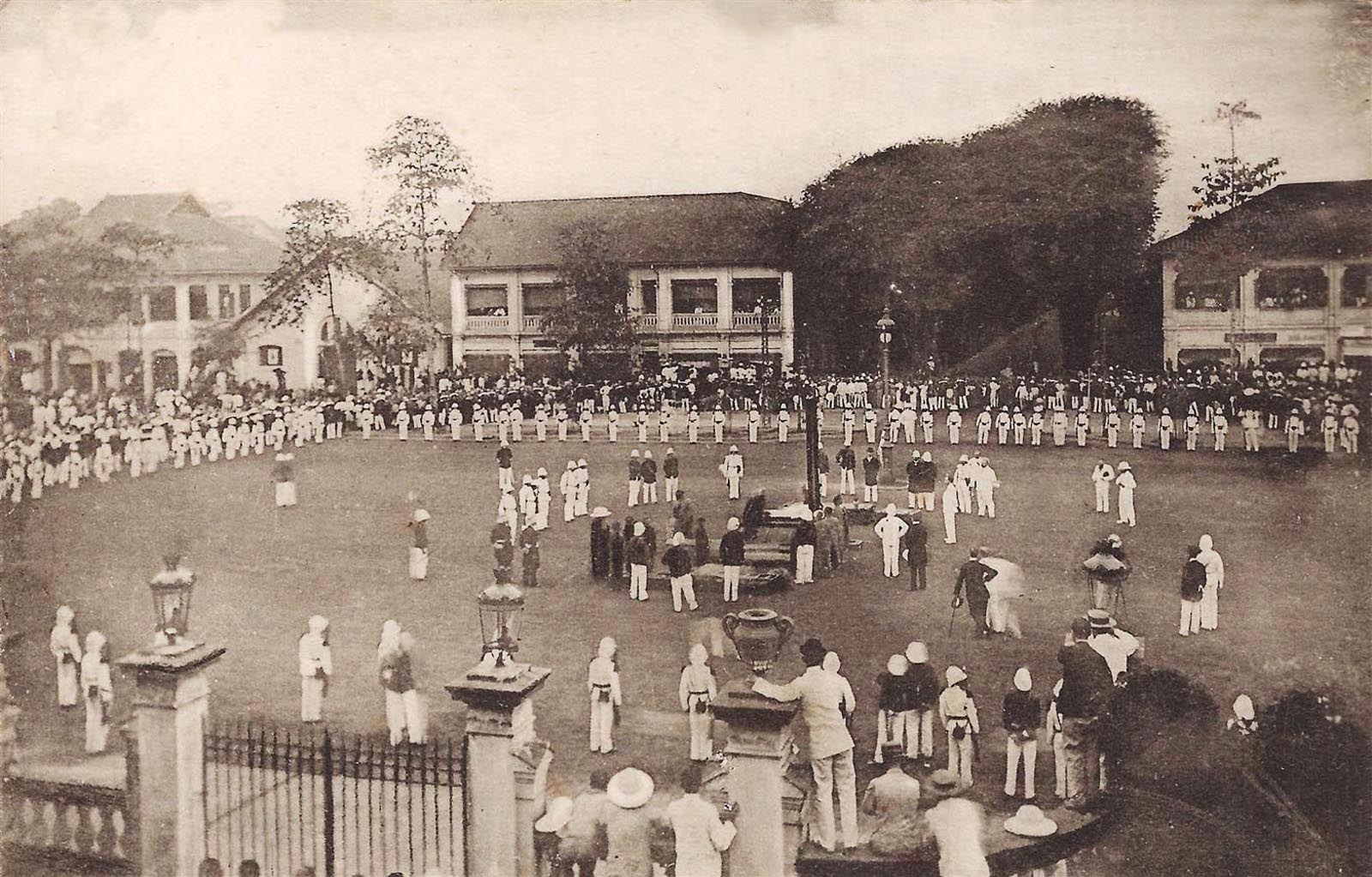 A public execution in front of the Reconciliation Court. The guillotine was placed at what is now the musical fountains on Nguyễn Huệ Street.
Image credit: manhhai

Back in the 19th century, when the Saigon Notre Dame Cathedral and The Reconciliation Court were yet to be built, the first church in Cochinchina was built on this site. 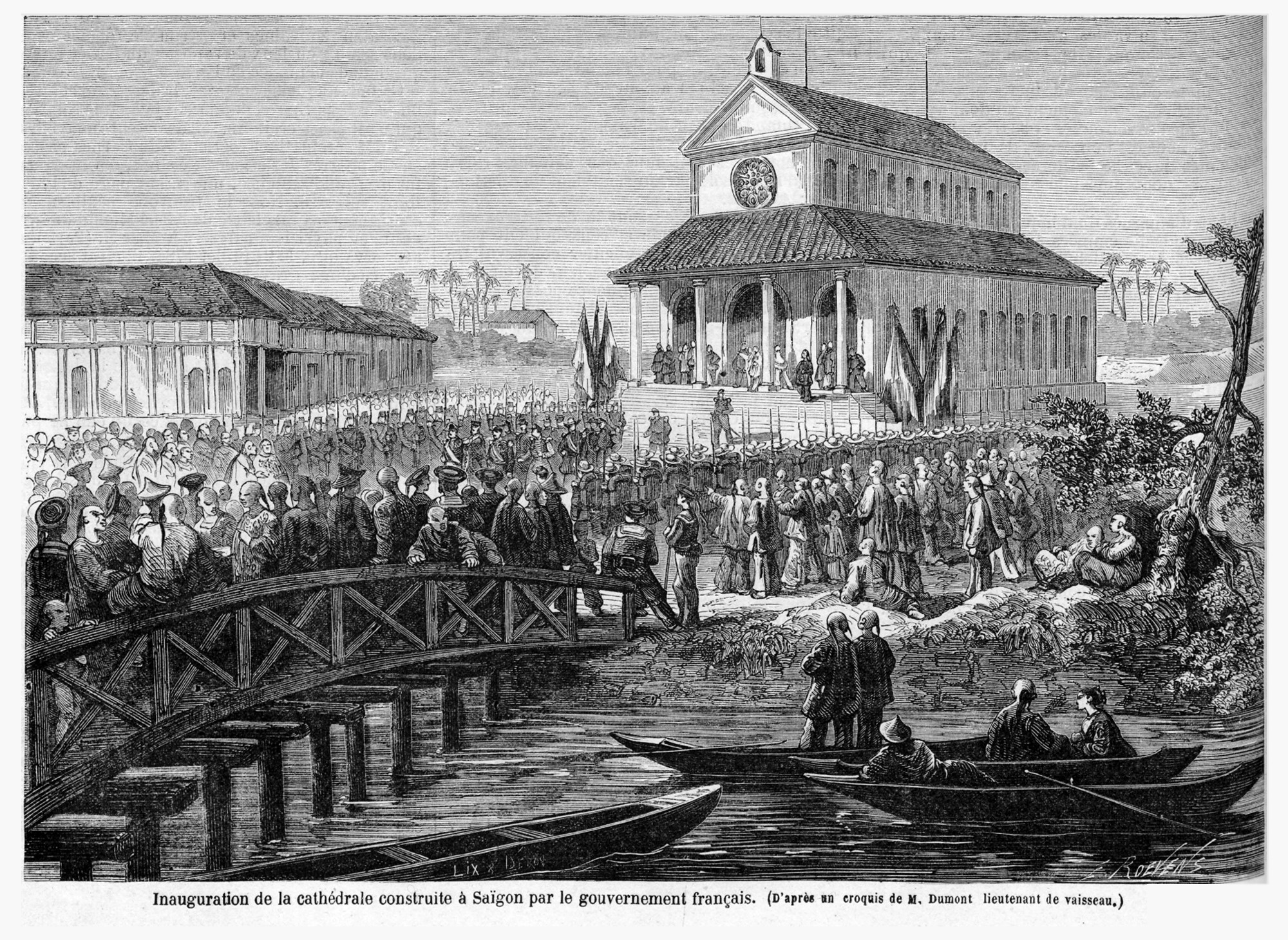 The inauguration of the first church of Saigon.
Image credit: manhhai

Today, the Sun Wah Tower is a high-rise building in which many companies such as Citibank, Maybank, and Emirates place their branch offices.

7. War Remnants Museum – the birthplace of a Vietnamese emperor 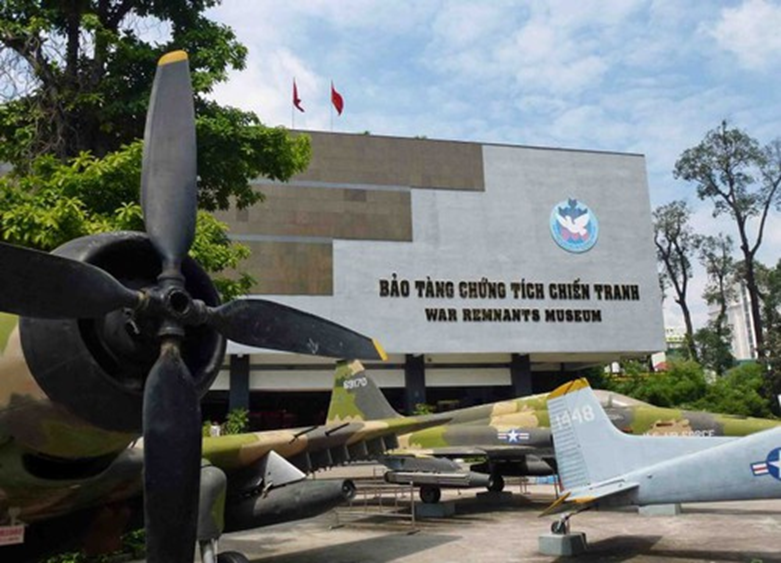 The War Remnants Museum is located on Võ Văn Tần Street in District 1, which is only about one kilometre from the Independence Palace. With more than 20,000 artefacts, this museum specializes in reflecting the history of war terrors and damage. However, you may not believe that this site of this museum was where a Vietnamese emperor was born. 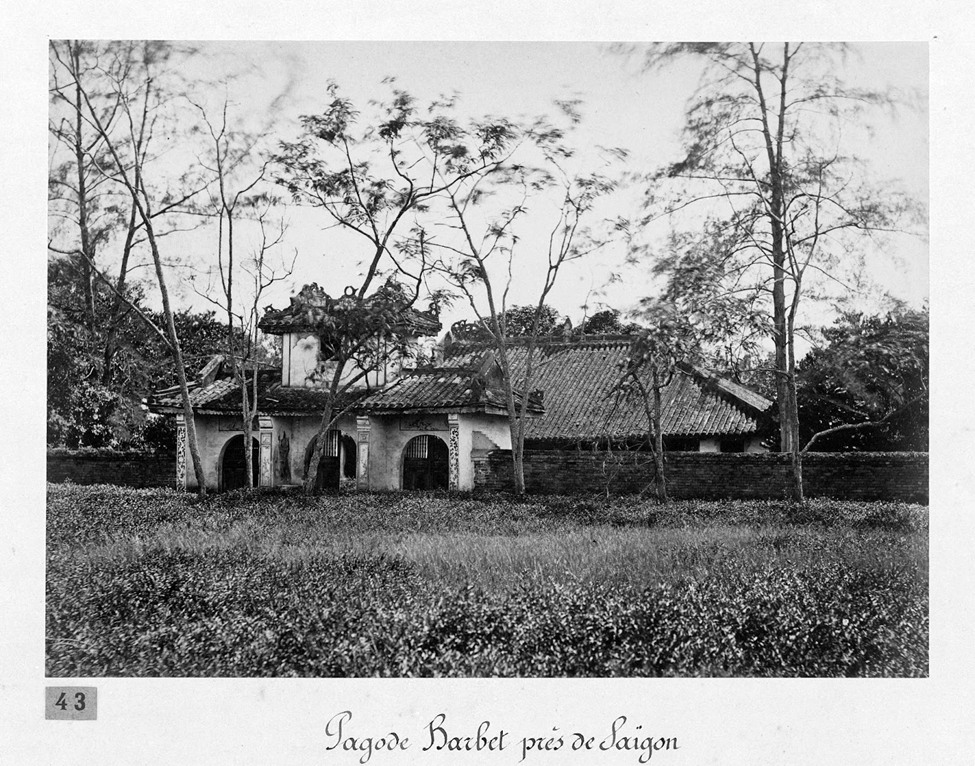 There is almost nothing left from Khải Tường Pagoda except this picture. When the French attacked the city in 1859, they formed a defence line across pagodas. Khải Tường Pagoda was occupied and renamed Pagode Barbé (or Barbet).
Image credit: manhhai

As mentioned in the Nguyễn Dynasty’s official records, around 1790, Nguyễn Ánh (later known as Emperor Gia Long), together with his troops, fled to this city to escape the chase of the opposing Tây Sơn forces.

Nguyễn Ánh and his men stayed in Từ Ân Pagoda, that locals speculate to have been located in present-day Tao Đàn Park before it was burned down by the French, while his concubines sheltered in Khải Tường Pagoda.

In 1791, one of his concubines gave birth to a boy named Nguyễn Phúc Đảm in Khải Tường Pagoda. This boy grew up and took up his father’s position to become Emperor Minh Mạng – the second ruler of the Nguyễn Dynasty.

To commemorate his birth in Khải Tường Pagoda, the Emperor Minh Mạng had the pagoda renovated with the government’s budget. He even offered Khải Tường Pagoda with an big illuminated Buddha statue. Though the pagoda was demolished in 1880, you can still admire this statue in the History Museum of Hồ Chí Minh City.

These 7 landmarks are popular attractions  in Hồ Chí Minh City. Now that you have a better insight into their history, your next visits to these places will be a lot more meaningful and memorable. 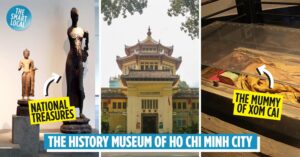 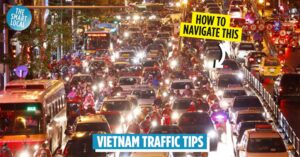