Rider gives family a raincoat on the road

The people of Saigon are famous for their kindness and generosity. Time and time again, stories of them helping a man fly home to his sick father, or assisting less fortunate fellow citizens have made headlines.

Still, no matter how often we see such occurrences, they never fail to bring a smile to our faces.

The case of this random rider on the street is another example to add to Saigon residents’ already impressive collection of good deeds. Upon spotting a family of strangers driving unprotected in the rain, the rider kindly decided to give them a raincoat.

Here is how the story unfolded.

The driver approaches the unprotected family to ask after them

The video – recorded by a car’s dashcam – shows that it was the morning of 8th June. It was raining heavily.

The original poster was inside his car when he slowed to a stop before a red light. In front of him, a few motorbike drivers also waited for the light to turn green so they could cross the intersection. It was a completely normal, everyday occurrence.

Until one of the motorbike drivers did something awesome.

The motorbike driver gave a raincoat to a family in need

As seen in the video, the driver saw that on the motorbike next to him, sat a man, a woman and a kid – his wife and child, we can presume. They didn’t have a raincoat with them and only wore hats for some measure of protection against the heavy rain.

Without hesitation, the unnamed driver inched closer to give the family a spare raincoat he had with him.

Their exchange lasted only a few seconds. With the traffic light turning green, the kind-hearted man tarried no longer. He continued to make his way through the bad weather, though probably with a smile on his face at the good deed he’d done.

A little sunshine on a rainy day

Heavy rain often makes for a damp, muddy, gloomy time. But the kindness of this stranger on the streets has no doubt brightened the unprotected family’s day considerably.

Indeed, even us – the thousands of people who see it through the Internet – can feel the warmth seep into our hearts.

It doesn’t have to be anything grand. Sometimes, all it takes is one simple act of generosity to create a ripple effect. Let this be an example for all of us to spread the positivity. 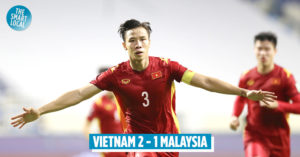 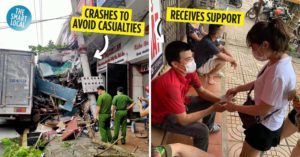