The COVID-19 pandemic is a major global threat, and medical workers are our heroes who are fighting relentlessly to protect our world.

To honor their efforts, artists in Vietnam has created illustrations portraying doctors, nurses, and other medical staff as Marvel superheroes – to the acclaim of netizens.

The studio wrote in its photo album caption, “Massive thanks to all doctors and medical workers who are fighting hard to get us through the COVID-19 pandemic.” 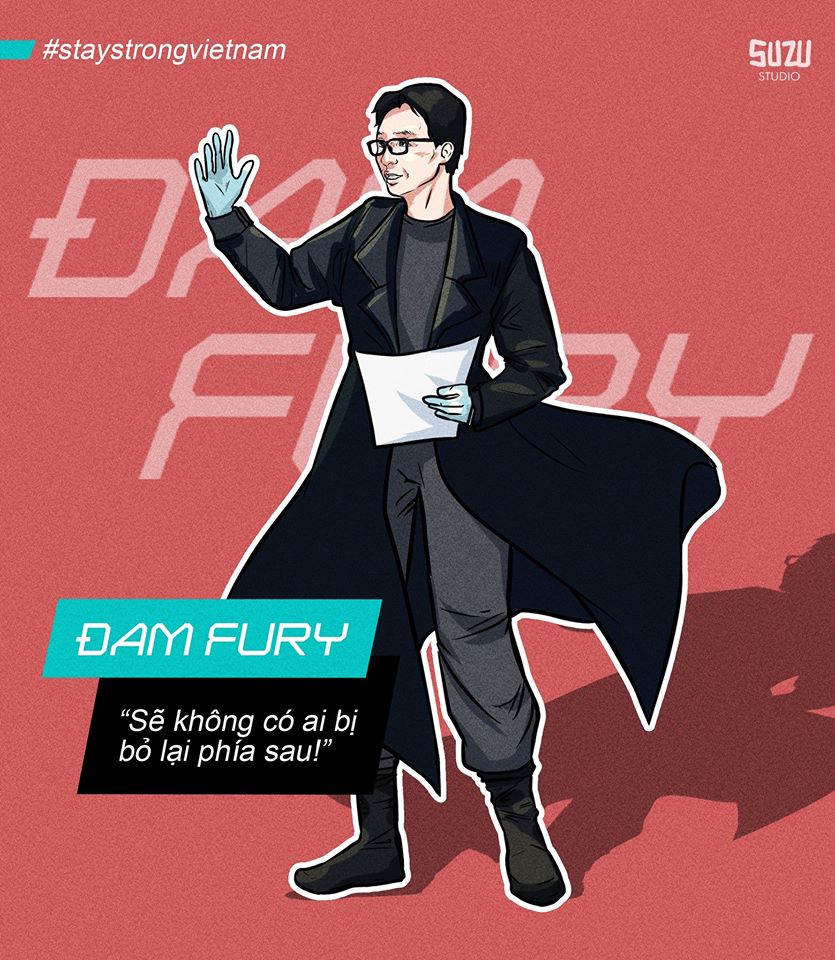 In one of the posters, Vietnam’s Deputy Prime Minister Vũ Đức Đam is shown taking on the role of Nick Fury, telling everyone that nobody will be abandoned in the fight against COVID-19.

In others, you can see Iron Man, Black Widow, Dr. Strange, and other heroes performing medical duties. 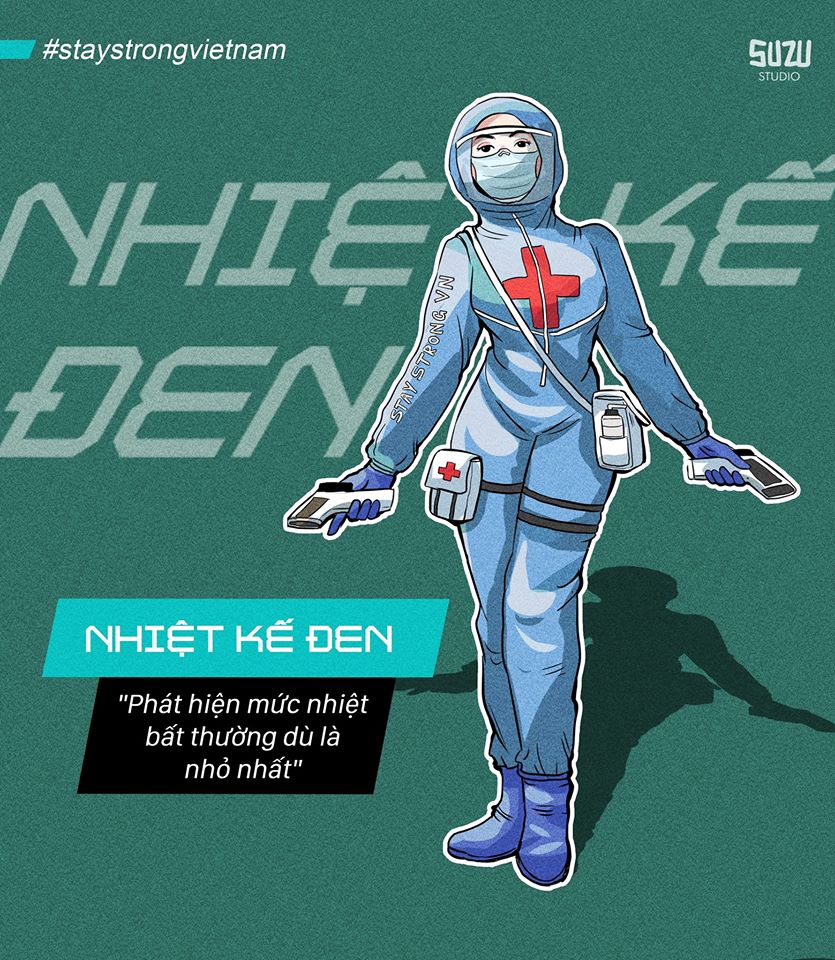 “I detect even the smallest abnormality in body temperatures” – a depiction of Black Thermometer
Image credit: SuZu Studio

For example, the secret agent Black Widow has now become a nurse named Black Thermometer, with two thermometers in her hands ready to detect even the smallest abnormality in patients’ body temperatures. 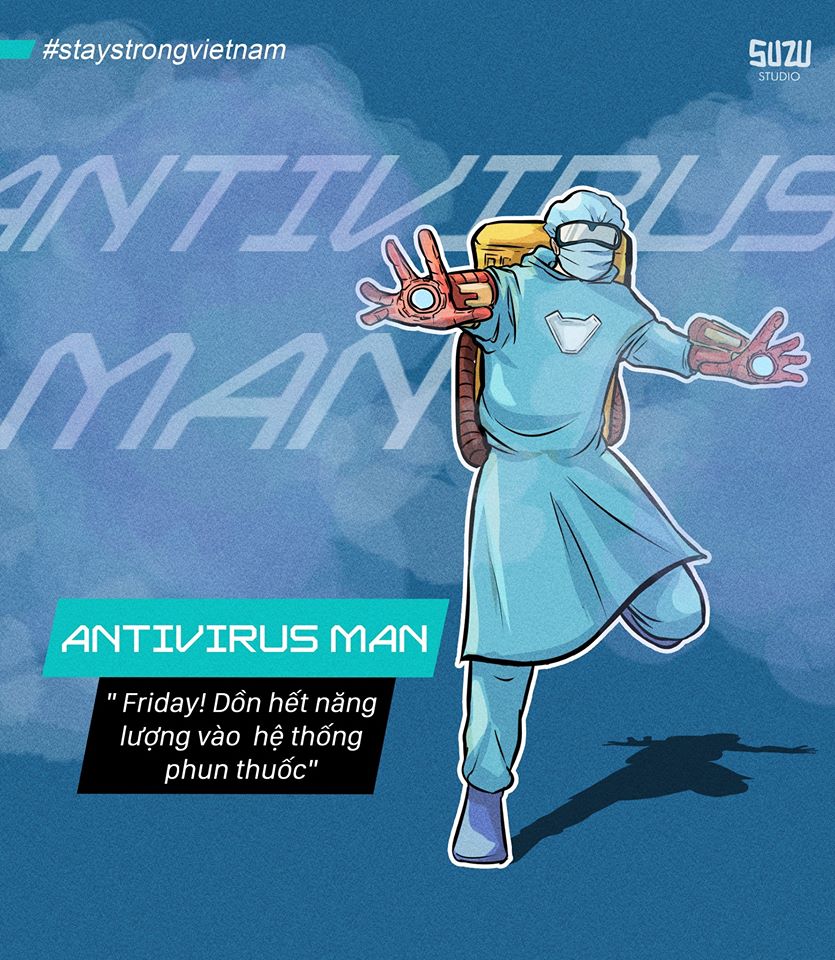 “Friday! Put everything we’ve got in the disinfectant spray system,” says Antivirus Man in this illustration
Image credit: SuZu Studio

Iron Man has swapped out his usual mechanical suit for a disinfectant spray kit in this illustration, where he has transformed into Antivirus Man telling his AI assistant Friday to put all the power into the spraying system for maximum disinfection capacity. 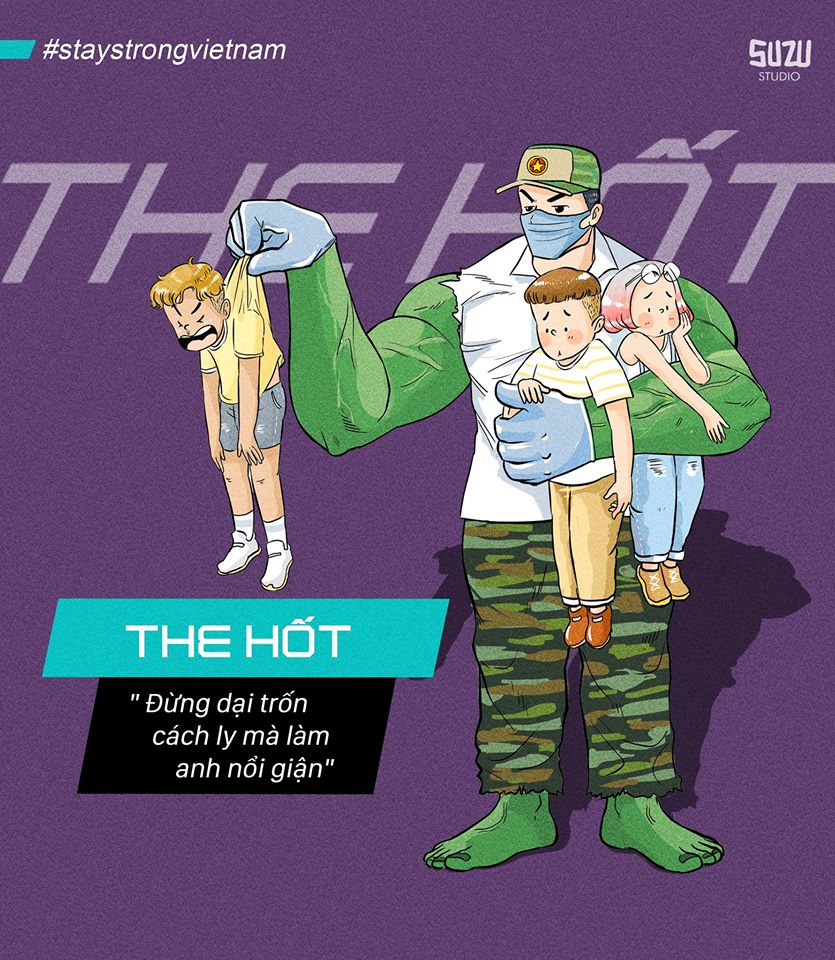 Scooping up characters who dared to break their quarantine orders, The Hốt (“Hốt” literally translates to “scoop” in Vietnamese) is a fictional depiction of Vietnamese soldiers who are there to enforce the mandatory quarantine regulations.

Just like The Hulk, The Hốt turns into a green giant when he gets mad, so you’d better watch out. 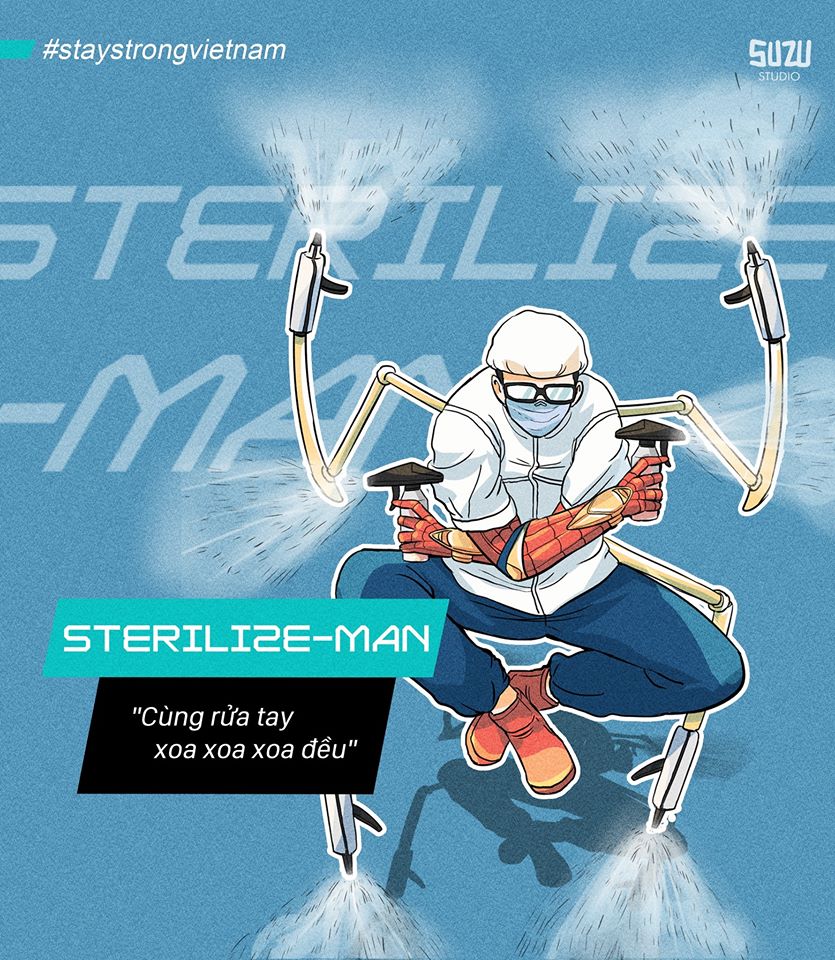 Your friendly neighborhood Spider-Man has decided to help out in these times of need, becoming Sterilize-Man. With mechanical spider legs carrying hand sanitizers, he goes about reminding people to wash their hands regularly. 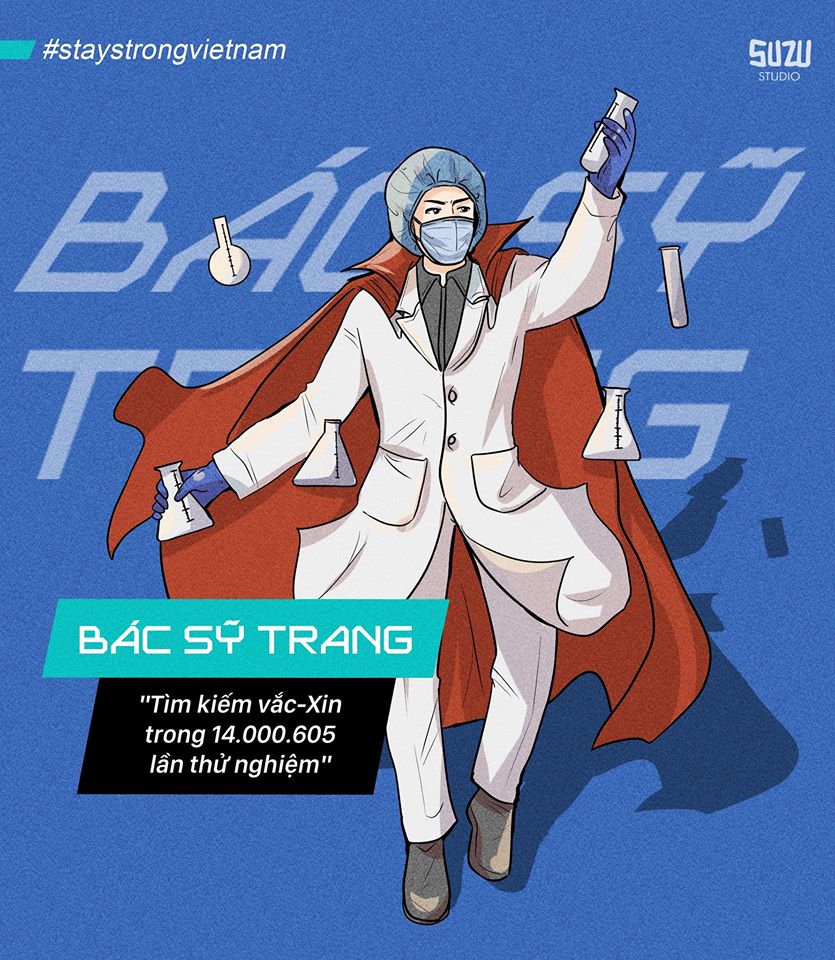 The archwizard Dr. Strange looked into the future to witness 14,000,605 possible scenarios to find one that could save the universe in Avengers: Infinity War.

His Vietnamese equivalent Dr. Trang is also doing 14,000,605 tests to discover a vaccine for the coronavirus. 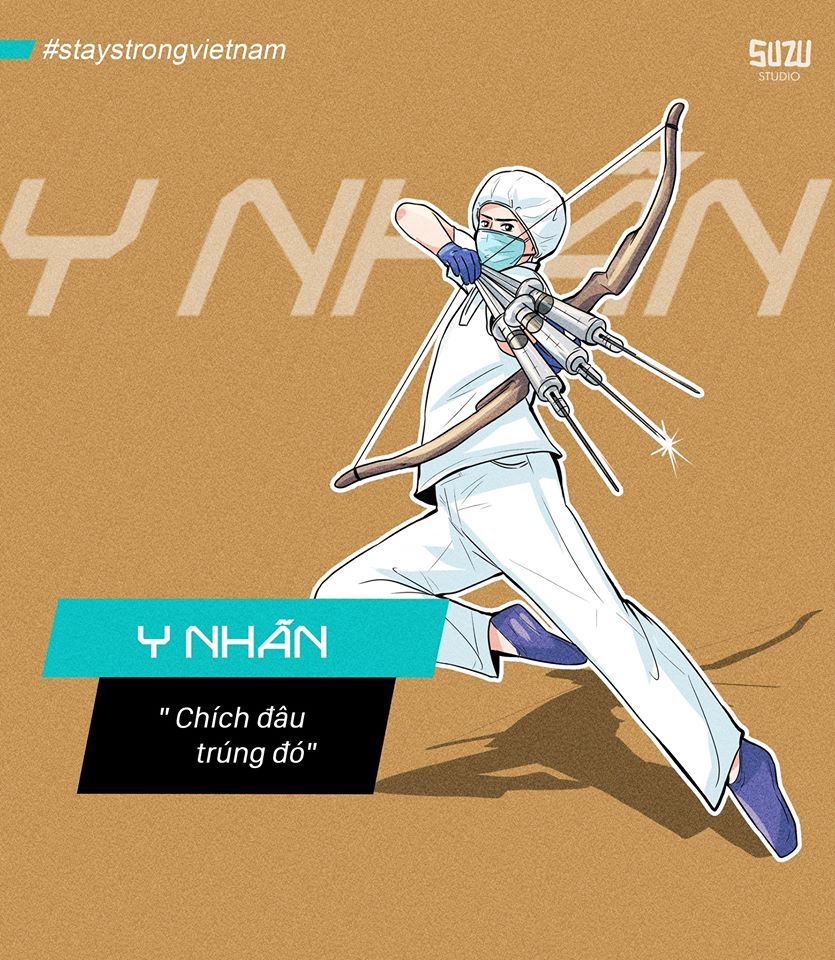 The posters were quickly shared on several pages, bringing in thousands of likes and comments. Many asked SuZu to make an English version to share with the rest of the world.

Others praise the studio for its creativity. Facebook user Nguyễn Huỳnh Minh Tú wrote, “A creative idea beautifully executed. Big fan of Marvel, by the way.”

Another user who goes by Võ Ngọc Lan Chi commented to ask SuZu Studio’s permission to use the posters as her profile picture.

Translation: Allow me to use the pics as my avatar! <3
Image credit: SuZu Studio

Healthcare staff are not just being recognized in illustrations, but in their paychecks too

In another development, medical workers in Vietnam are getting the biggest salary raise in 8 years. It is heartening to see that they are getting the recognition and respect they deserve. 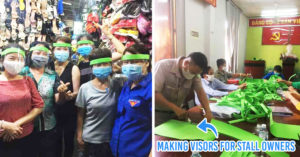 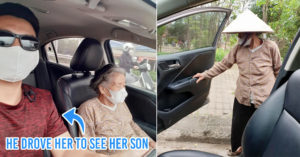