Guide to the Huế Citadel

As many wars happened throughout Vietnam’s history, many historical landmarks have been damaged or terribly destroyed. Our hot and humid climate also makes conservation more challenging.

However, when visiting the Huế Citadel, you can still admire many spectacular imperial buildings associated with the Nguyễn dynasty, the last feudal dynasty in Vietnam’s history. In fact, this is the least damaged citadel in Vietnam today.

In this guide, you will have a brief look at what to expect from the citadel, from spectacular buildings to the historical background behind them.

The layout of the Huế Citadel 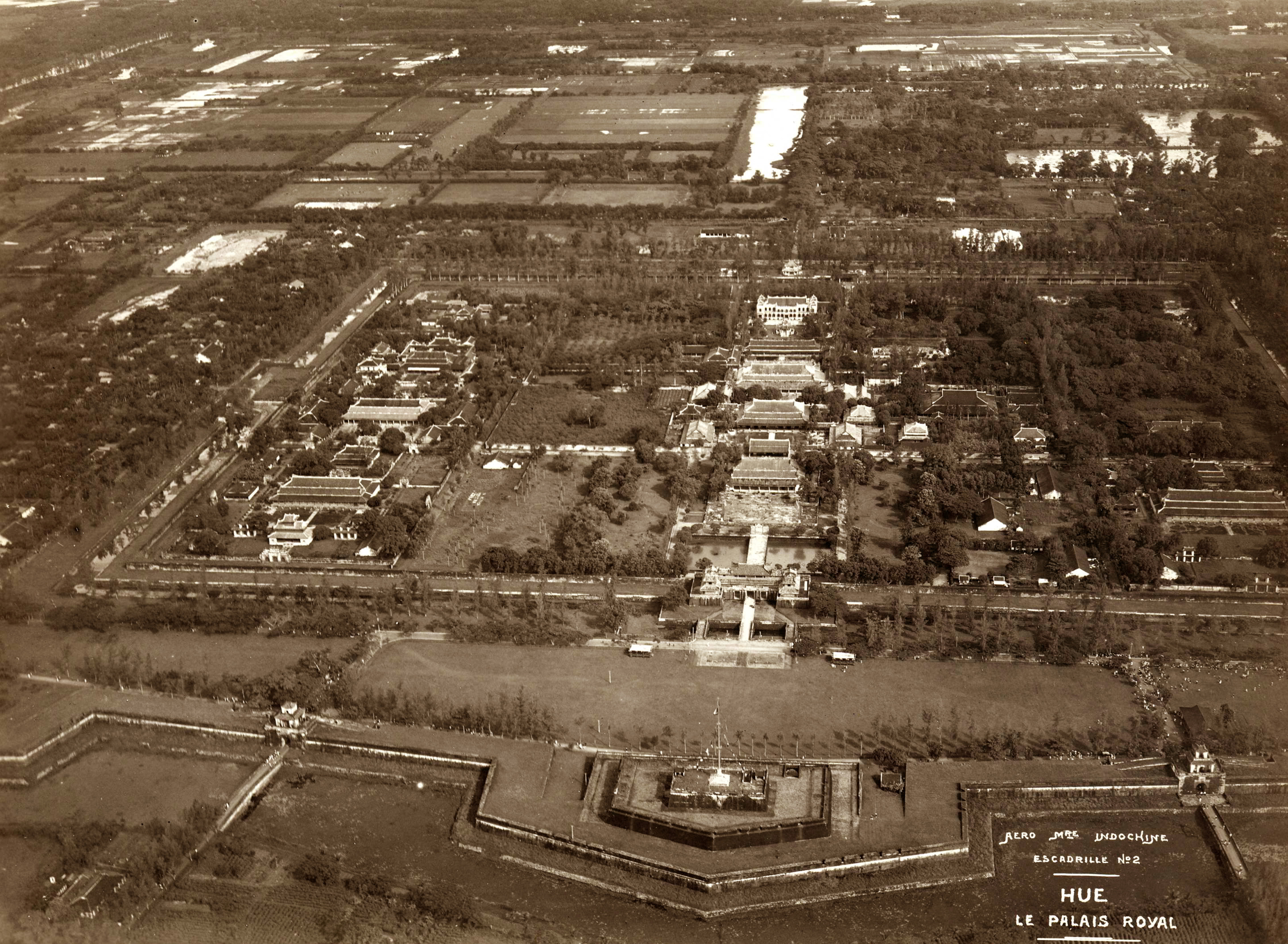 The aerial view of the Huế Citadel in 1932 before many buildings were destroyed in the wartime
Image credit: manhhai

As Huế was the capital of the country from the  17th to the 20th centuries, its citadel had been well constructed during all that time. Inspired by the architecture of the Fortifications of Vauban in France, the Huế Citadel includes three layers of walls.

The outermost wall covers an area named Kinh Thành. It was 6.6 meters high, and 21 meters thick with many star-shaped angles. People could get through this first layer by 8 main gates. You can easily recognize this wall as it is next to the Flag Tower.

The middle wall covers a rectangular area called Hoàng Thành or Đại Nội. This is the area where you can find the most important buildings of the royal family and also the focus of this guide. Ngọ Môn is the most recognizable gate on this wall.

The innermost wall protects Tử Cấm Thành, or the Forbidden City, where the royal family lived and worked. You can get through this wall by Đại Cung Môn right behind Thái Hòa Palace.

1. The Flag Tower – used to signal royal occasions in the past 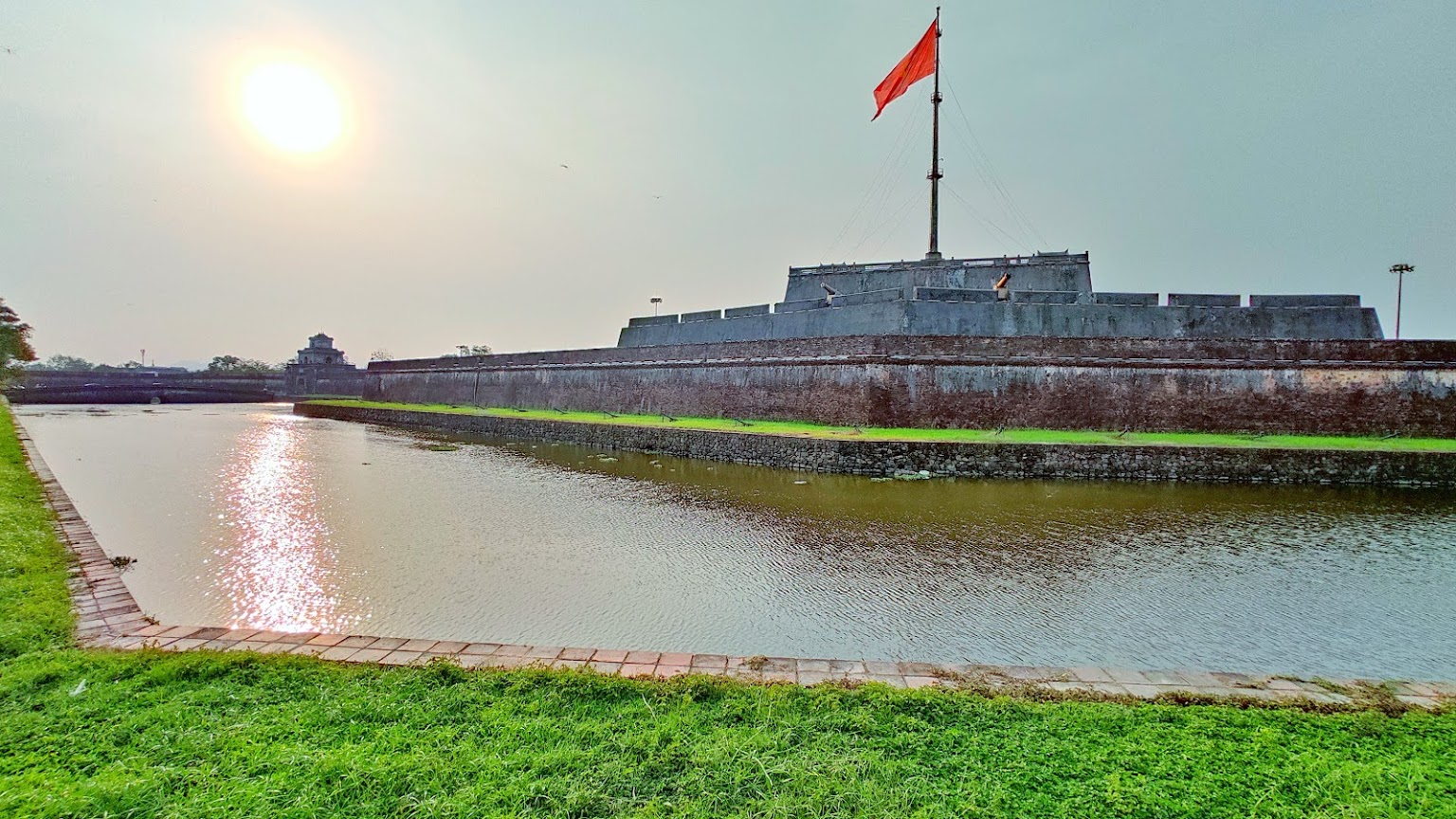 The Flag Tower is surrounded by a moat
Image credit: Trần Duy Hiệp

The very first thing you can see when going to the citadel is no other than its simple but iconic flag tower, which is opposite the southern gate and adjacent to the Perfume River. Originally dubbed the Nam Chánh Fortress, the Flag Tower consists of a metal pole erected on a 17.5-meter-high three-story concrete building. It was first built in 1807 and renovated later in 1829, 1831, and 1840.

The pole was originally 30 meters high and was made of wood. However, it was then changed many times until the final metal version was erected in 1948, 3 years after the end of the Nguyễn Dynasty.

The flag tower was used to announce special royal occasions, most associated with a different flag. Apart from that, the Vọng Đẩu, or the Observatory, on the pole also allowed the soldiers to survey the shore from afar.

In addition, between the Flag Tower and the Perfume River are Phu Văn Lâu and Nghênh Lương Đình. While Phu Văn Lâu was for announcing official edicts from the government, Nghênh Lương Đình was a scenic resting stop for the emperors before their river trips. These two buildings are featured on the current VND50,000 banknote of Vietnam.

2. Ngọ Môn – the iconic southern gate of the citadel 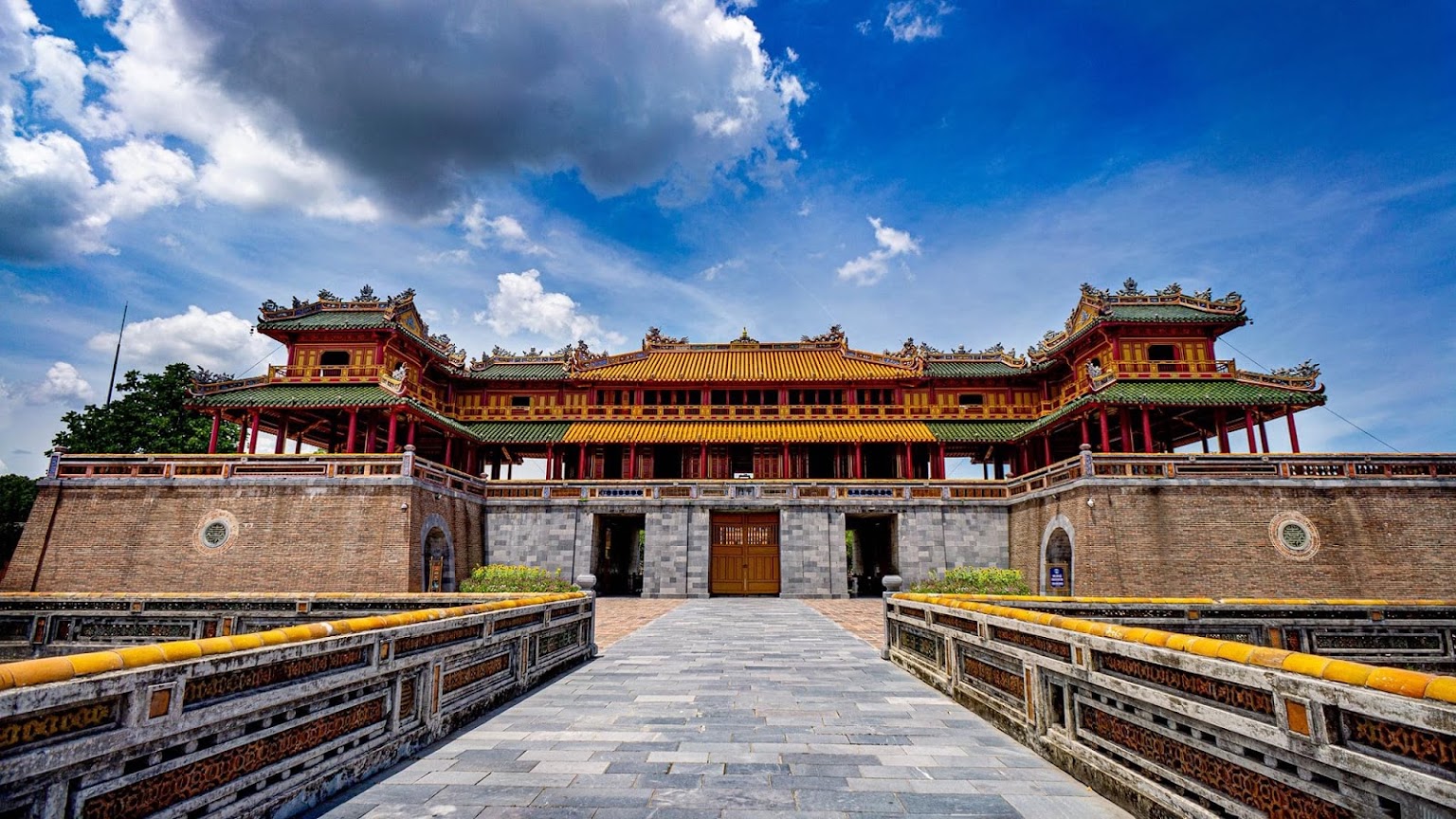 You can start your journey across the citadel right at its iconic southern gate, Ngọ Môn, also known as the Meridian Gate or the Zenith Gate. This gate was once exclusively used by the emperor or distinguished guests.

Though usually considered the symbol of the Huế Citadel, it was not yet built when the Nguyễn Dynasty was established in 1802. Instead, Emperor Minh Mạng had this gate constructed in 1833 in an effort to replan the citadel. 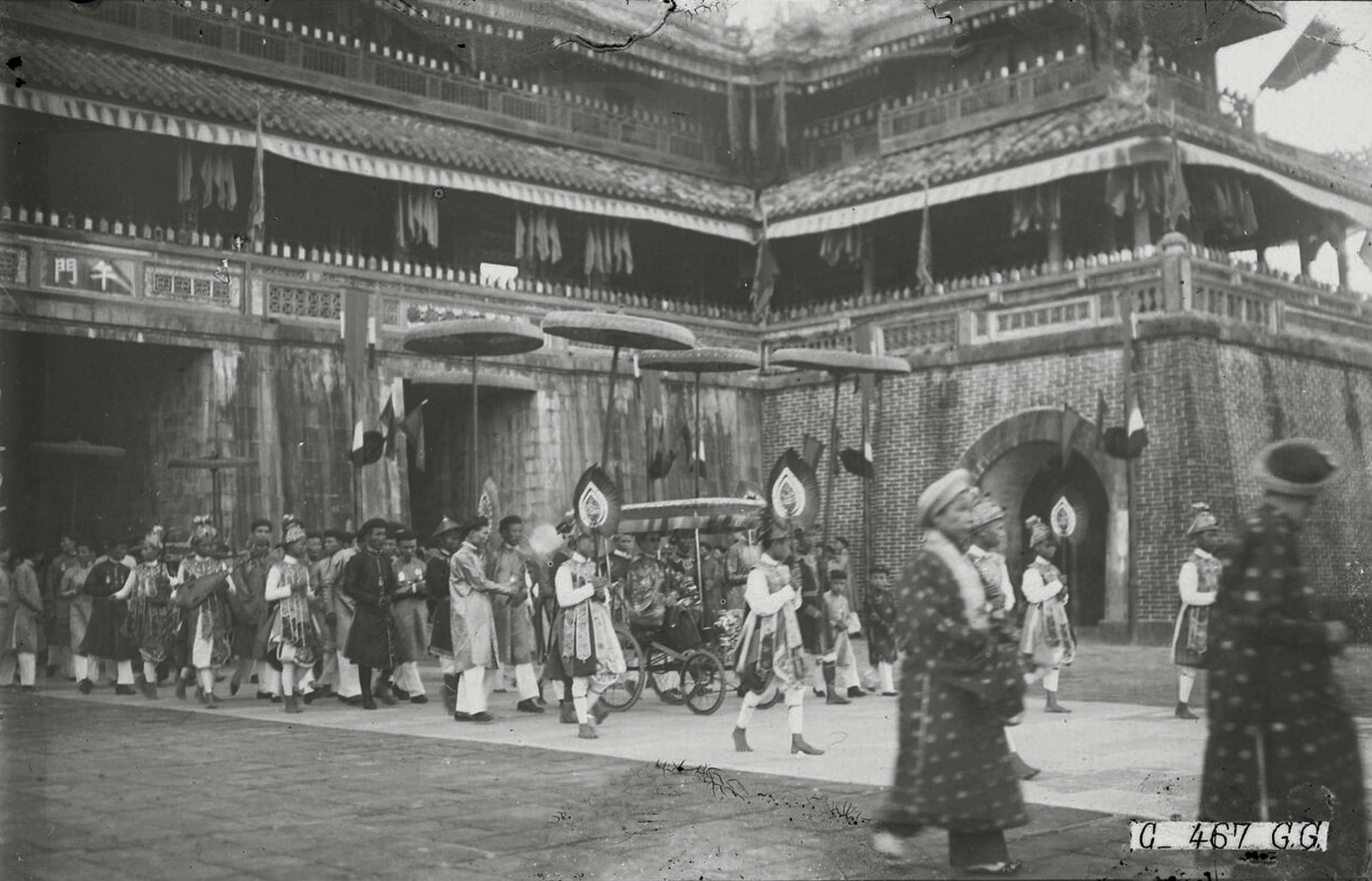 The gate has a U shape with a height of 5 meters and covers an area of approximately 1.560 square meters. The Ngũ Phượng pavilion on top includes 100 ironwood pillars divided into two wings, and its roof is covered with glazed tiles with many delicate phoenix figures.

The Ngọ Môn has been the venue of many important events in Vietnamese history, including the abdication of Emperor Bảo Đại, ending the last feudal dynasty of Vietnam.

3. Thái Hòa Palace – the symbol of the emperor’s power 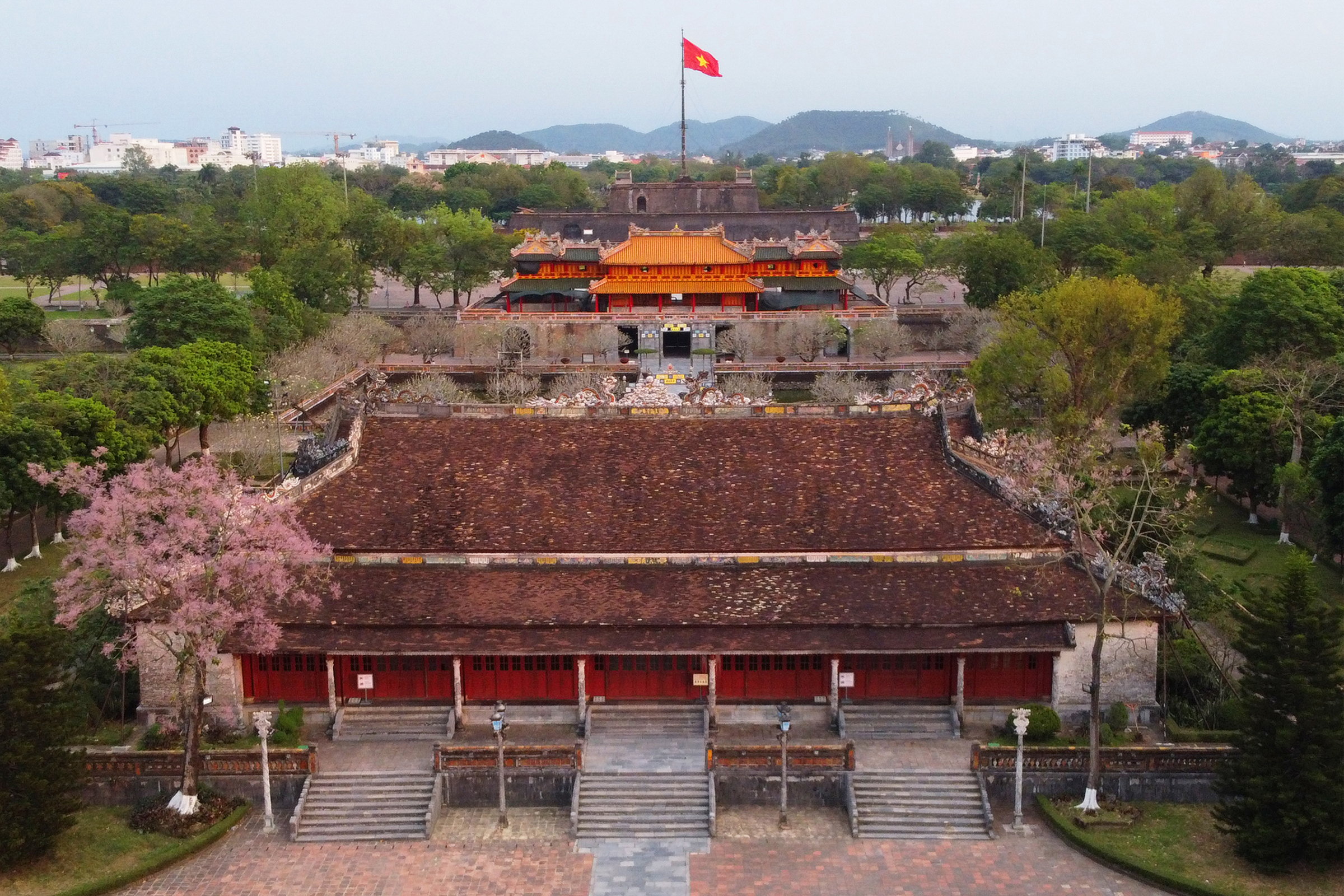 Going through the Ngọ Môn, you will see a bridge named Trung Đạo, or the Bridge of Golden Waters, which was an exclusive path for the emperor. This bridge will lead you to one of the most significant palaces in the Huế Citadel – Thái Hòa Palace and the Đại Triều Nghi Esplanade in front of it.

The Thái Hòa Palace, meaning the Palace of Supreme Harmony, is the place where Nguyễn emperors met his inferiors to discuss national matters. The place also witnessed the coronations of all Nguyễn emperors as well as other important imperial ceremonies. In the past, only the emperors’ relatives and high-rank officials were allowed to step into the Thái Hòa Palace. The others had to stand on the Đại Triều Nghi Esplanade. 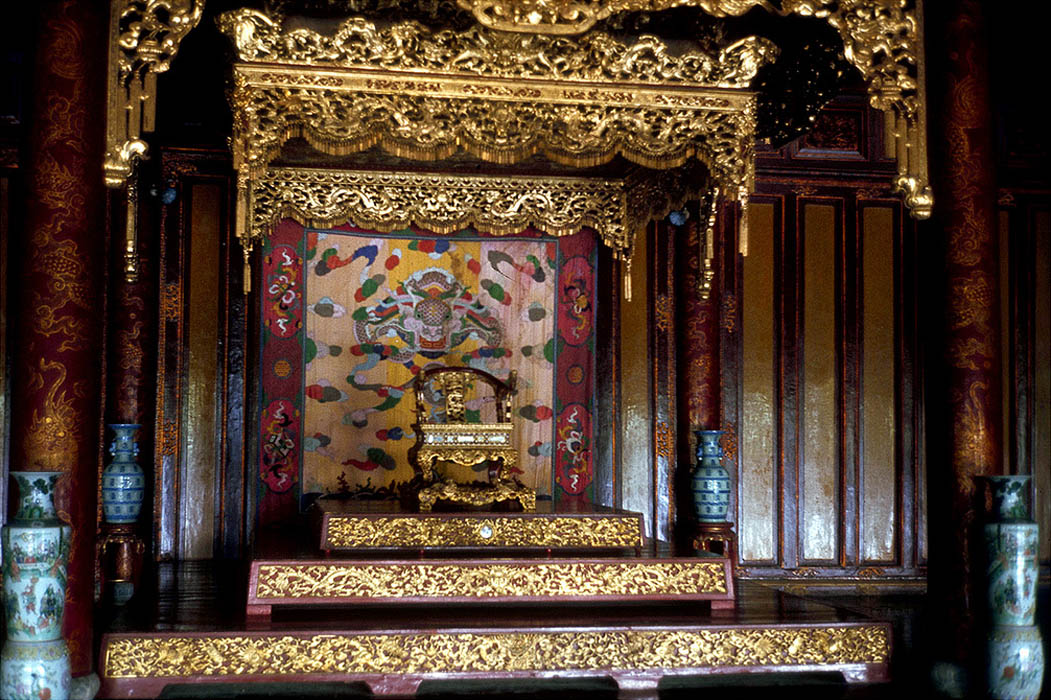 When entering the Thái Hòa, you will be enthralled by the intricate decorative patterns. Around the palace, pillars, walls, and the floor were painted with a specific paint, illuminated with dragon images representing the emperors, and gilded with gold. Interestingly, in the middle of the palace, you will see the emperor’s throne, which is a national treasure of Vietnam. 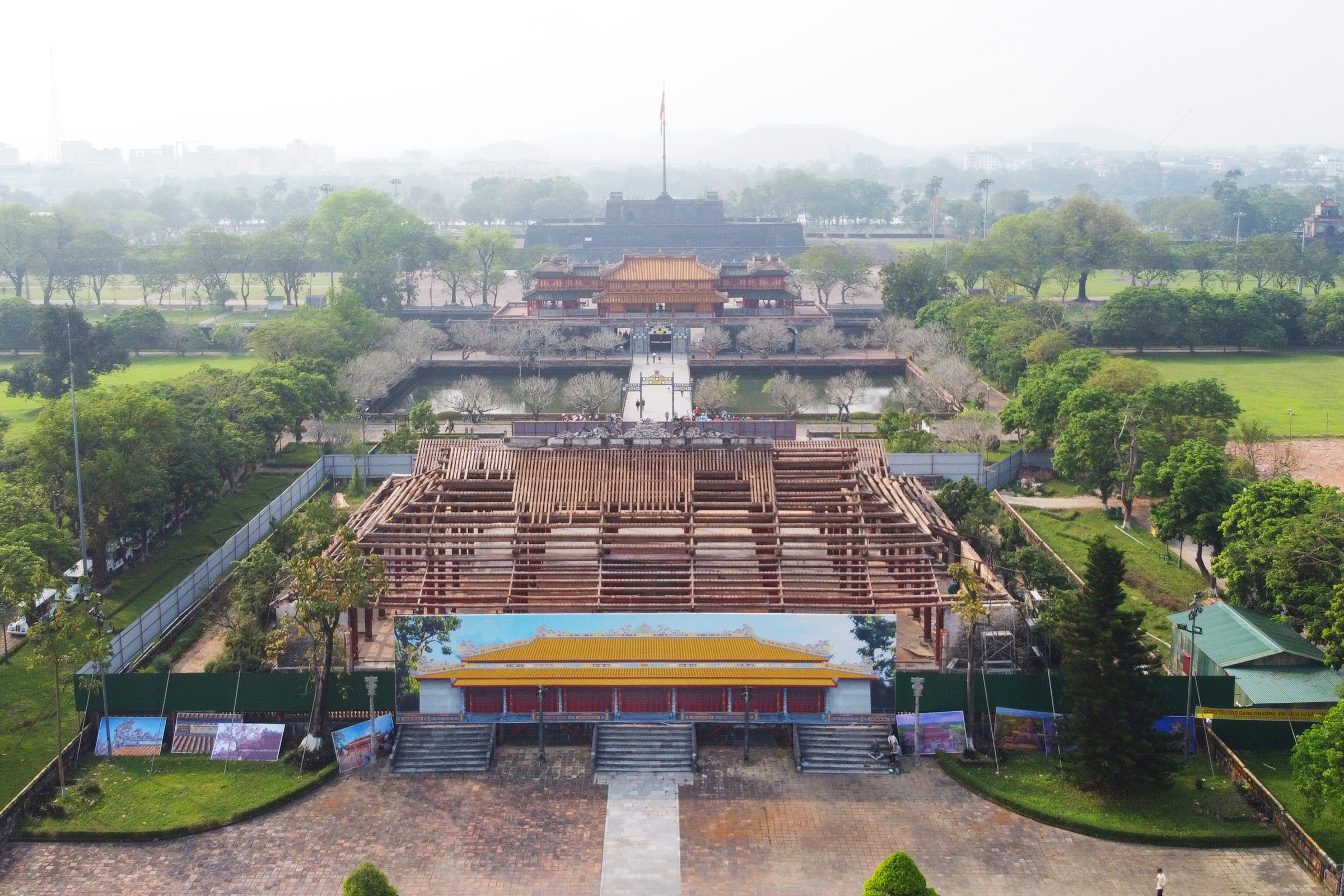 Thái Hòa Palace was first built in 1805 under Emperor Gia Long’s reign, then renovated many times under his successors’ reign. After the Vietnam War, the palace was enhanced many times. The palace is currently under a massive renovation which is expected to be complete in August 2025. 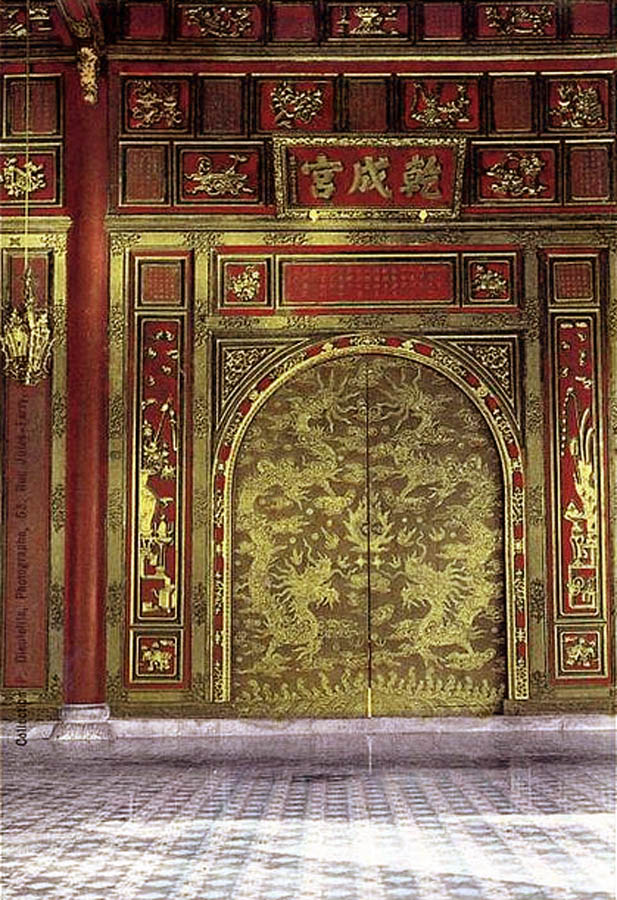 If you keep going northward, you will reach Tử Cấm Thành, the Forbidden City. It is separated from the Thái Hòa Palace by the Đại Cung Môn, meaning the Gate of Grand Palaces. 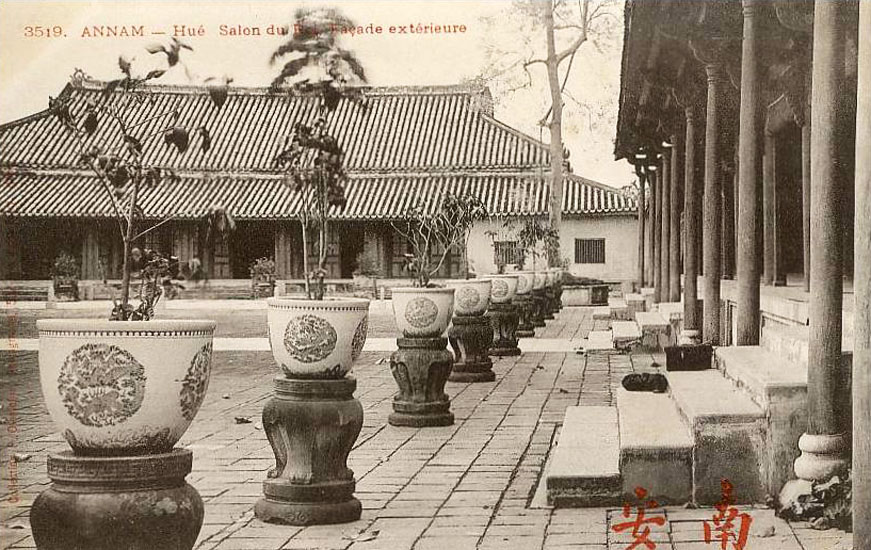 Cần Chánh Palace before it was destroyed
Image credit: manhhai

First built in 1804 as the Cung Thành,  meaning the Grand Palaces, the Forbidden City was a complex of many palaces constructed throughout the dynasty. It was located on a large rectangular piece of land with every side about 300 meters long. The city was surrounded by a 3.72-meter high and 0.72-meter thick wall. 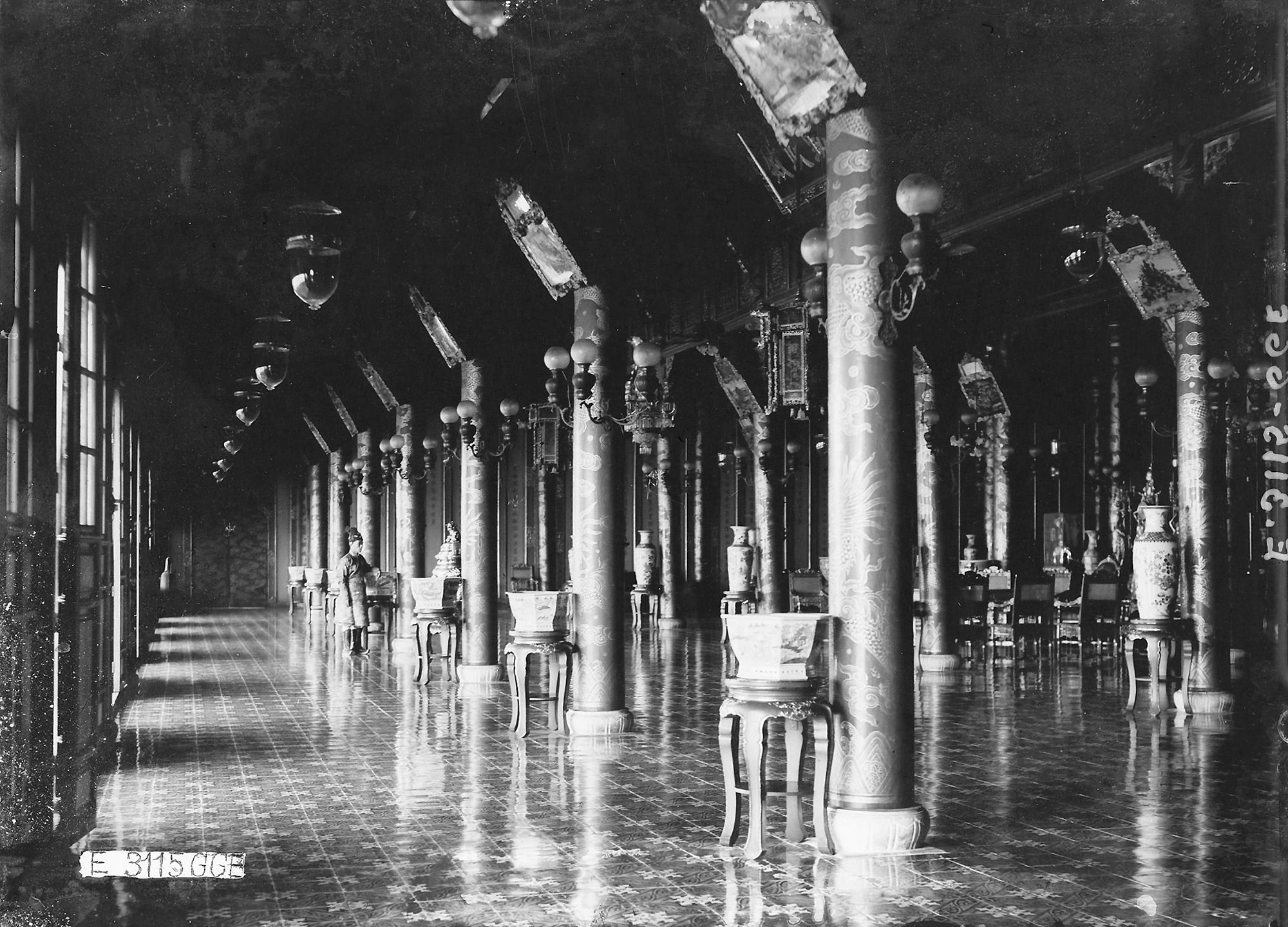 You may find the locations of many palaces where the royal family used to live and work. In fact, right behind the Đại Cung Môn, you will see the floor of Cần Chánh Palace and Bái Mạng Esplanade, which were the working place of the emperor on less formal occasions.

On the two sides of Bái Mạng Esplanade were Hữu Vu and Tả Vu which served as the waiting rooms for officials before meeting the emperor.

5. Living halls and palaces of the royal family 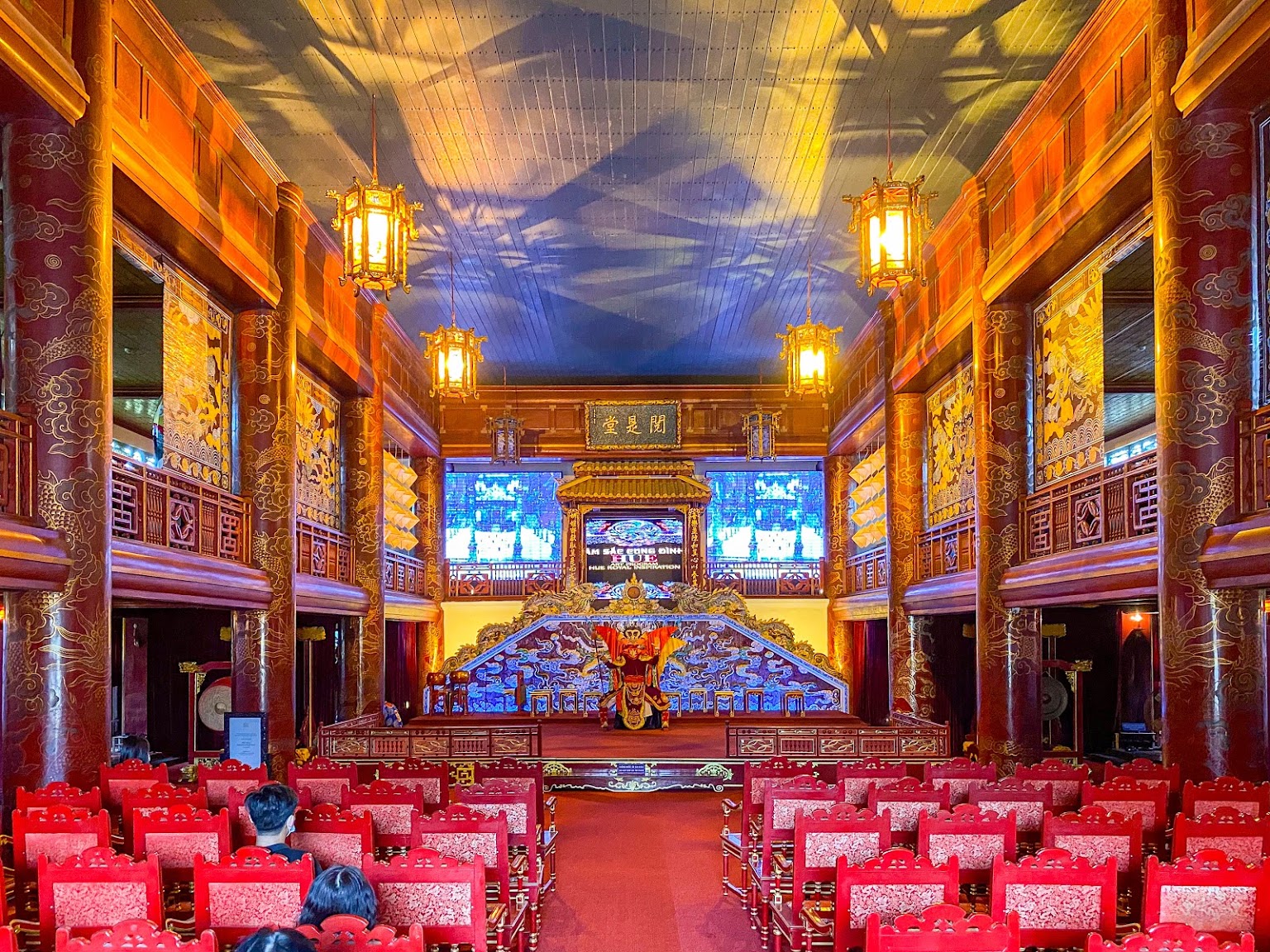 Duyệt Thị Đường, the imperial theater, is to the left of Càn Thành Palace. It was constructed in the 1820s, replacing a former theater on the same site. Today, it is regarded as the oldest theater in Vietnam. 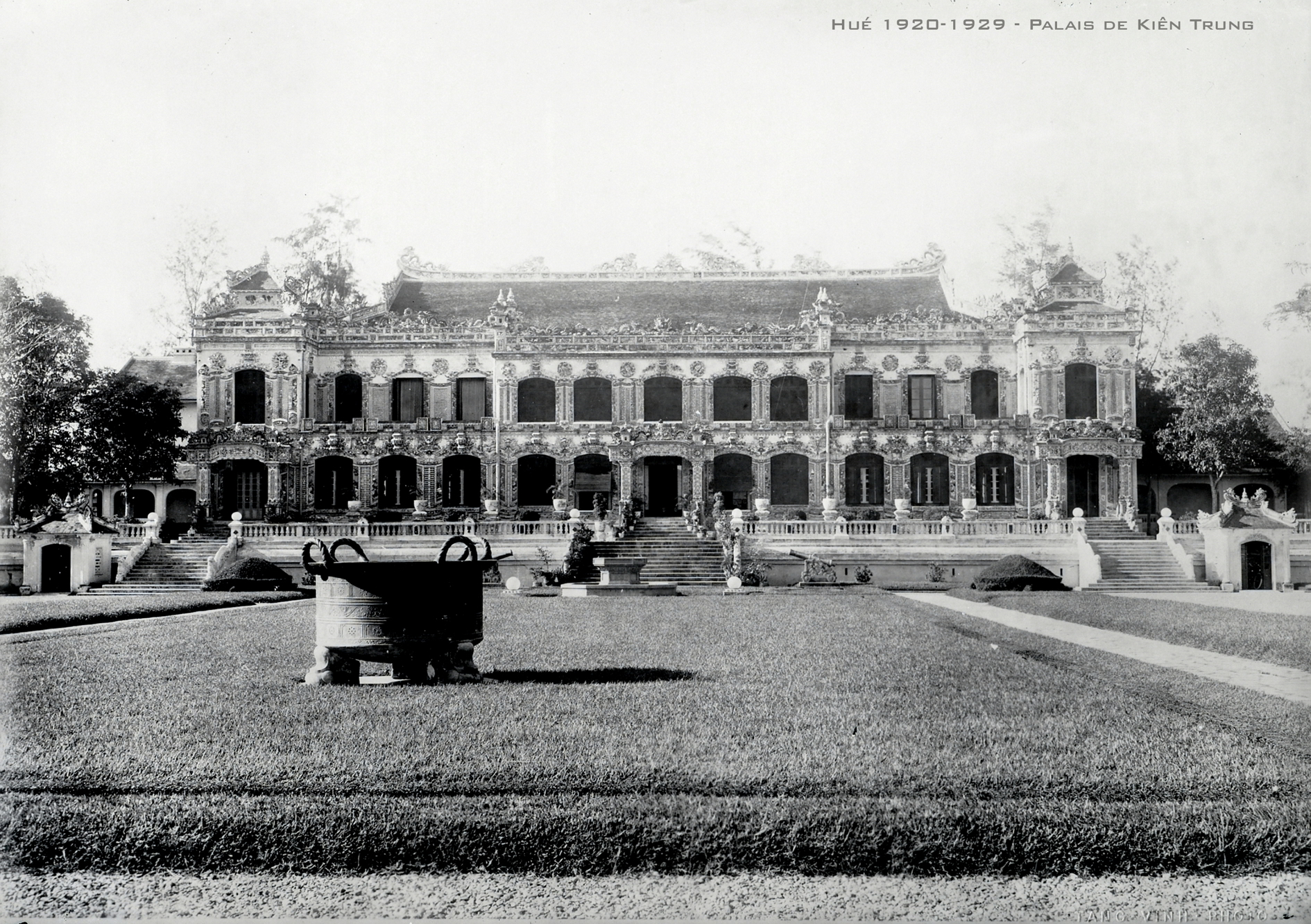 Kiến Trung Palace before it was destroyed
Image credit: manhhai

Keep going northward, and you will see the locations of the Khôn Thái and Kiến Trung Palaces. While the former was the residence of the First Queen, the latter was a Western building where Emperor Khải Định worked. Scattered around these two buildings were the smaller halls where princes and princesses were educated, a study, and a garden of the emperor. 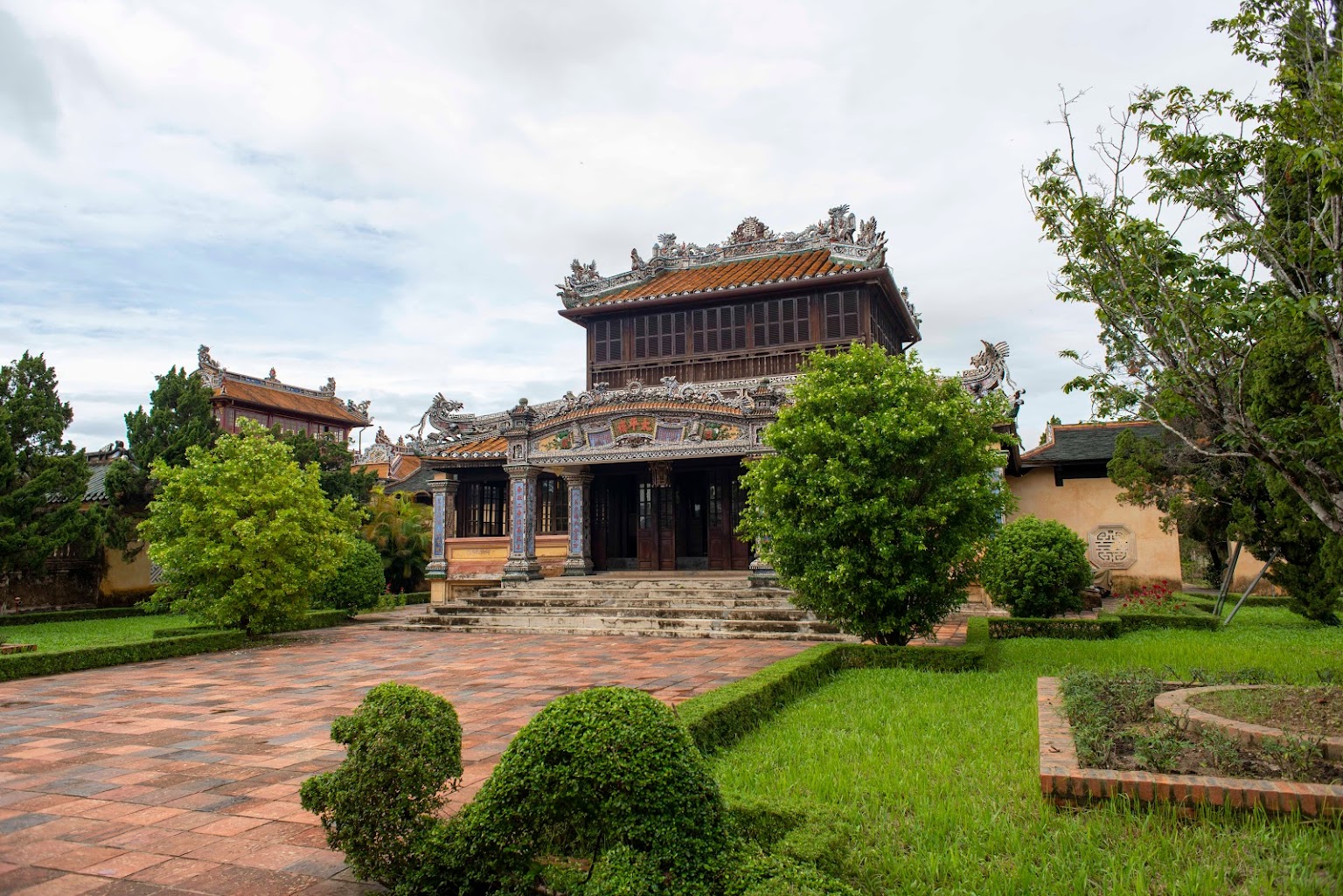 Unfortunately, most of these buildings were heavily damaged or completely destroyed due to the scorched-earth military tactics during wartime. For now, you can visit Duyệt Thị Đường, or the theater, and Thái Bình Lâu, or the emperor’s study until other buildings are reconstructed.

6. The Queen Mothers’ residences  – an area meant for relaxation 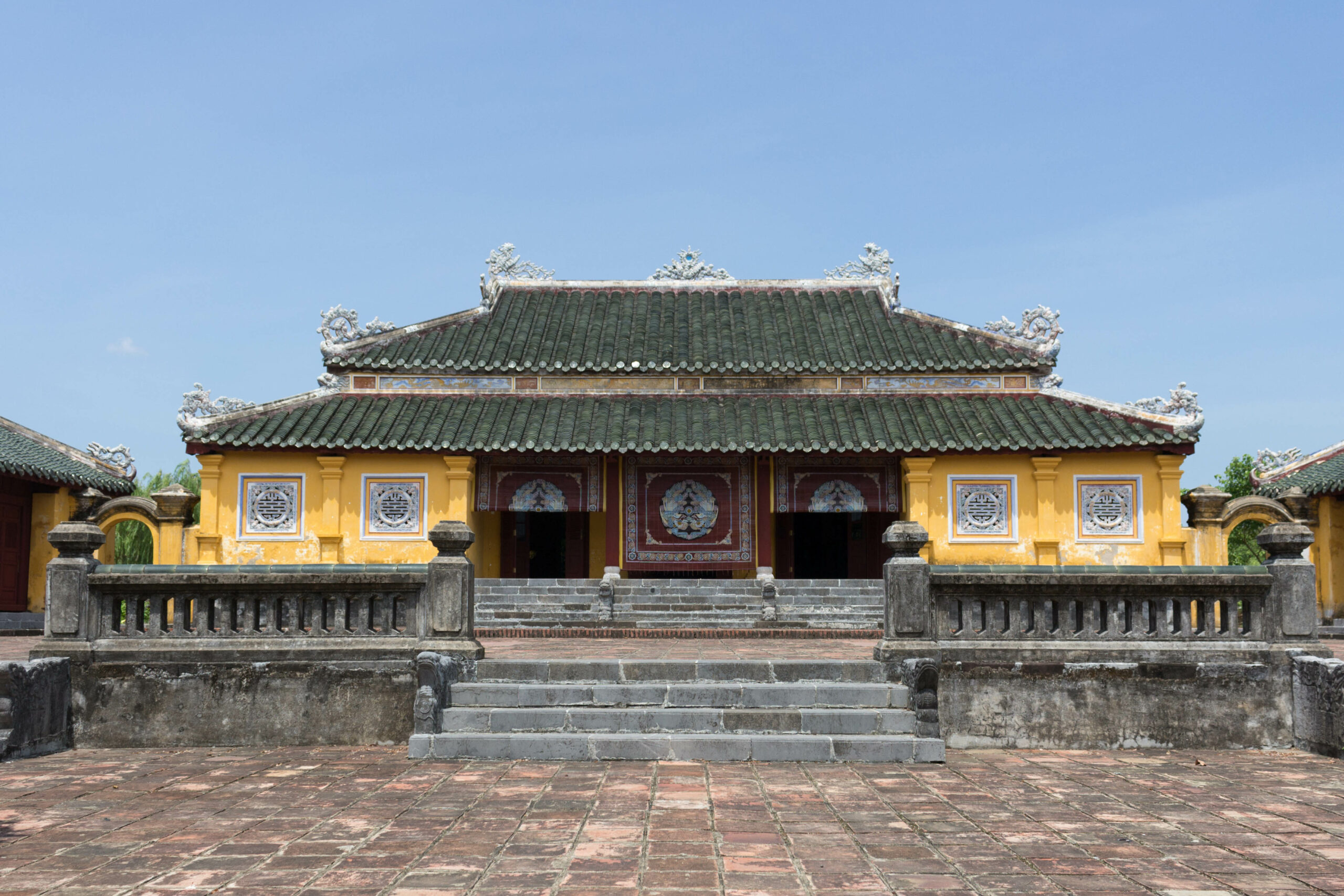 From the Forbidden City, if you keep going to the northwest, you will come to the palaces where the empresses and mistresses used to live.

To the northwestern corner of the citadel is the Trường Sanh Hall where the Queen Mothers and Grand Queen Mothers used to live. The Hall was first built in 1821 as a garden for the emperors’ mothers and grandmothers to hang out.

That’s why when coming here, you will find many false hills and a crescent artificial creek, creating a calm and relaxing atmosphere for the whole hall. 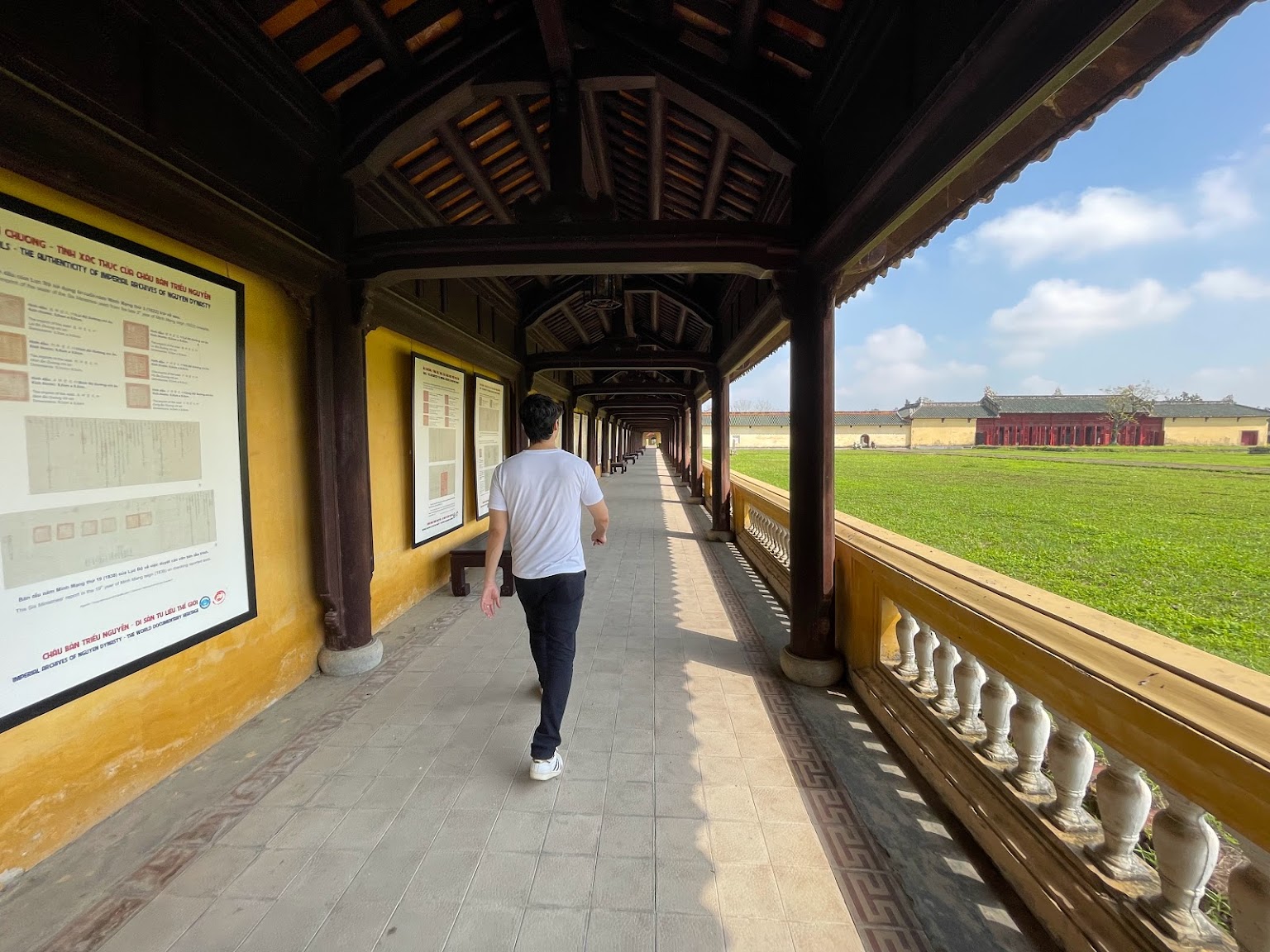 Similarly, to the south of Trường Sanh Hall is Diên Thọ Hall, another place for the Queen Mothers. This Hall was built in 1804 as the residence of Hiếu Khang, the Queen Mother of the Founding Emperor Gia Long.

Covering a large area of 17,500 square meters with lots of smaller halls, pavilions, and palaces, it is the most complicated and the most intact existing building complex inside the citadel. 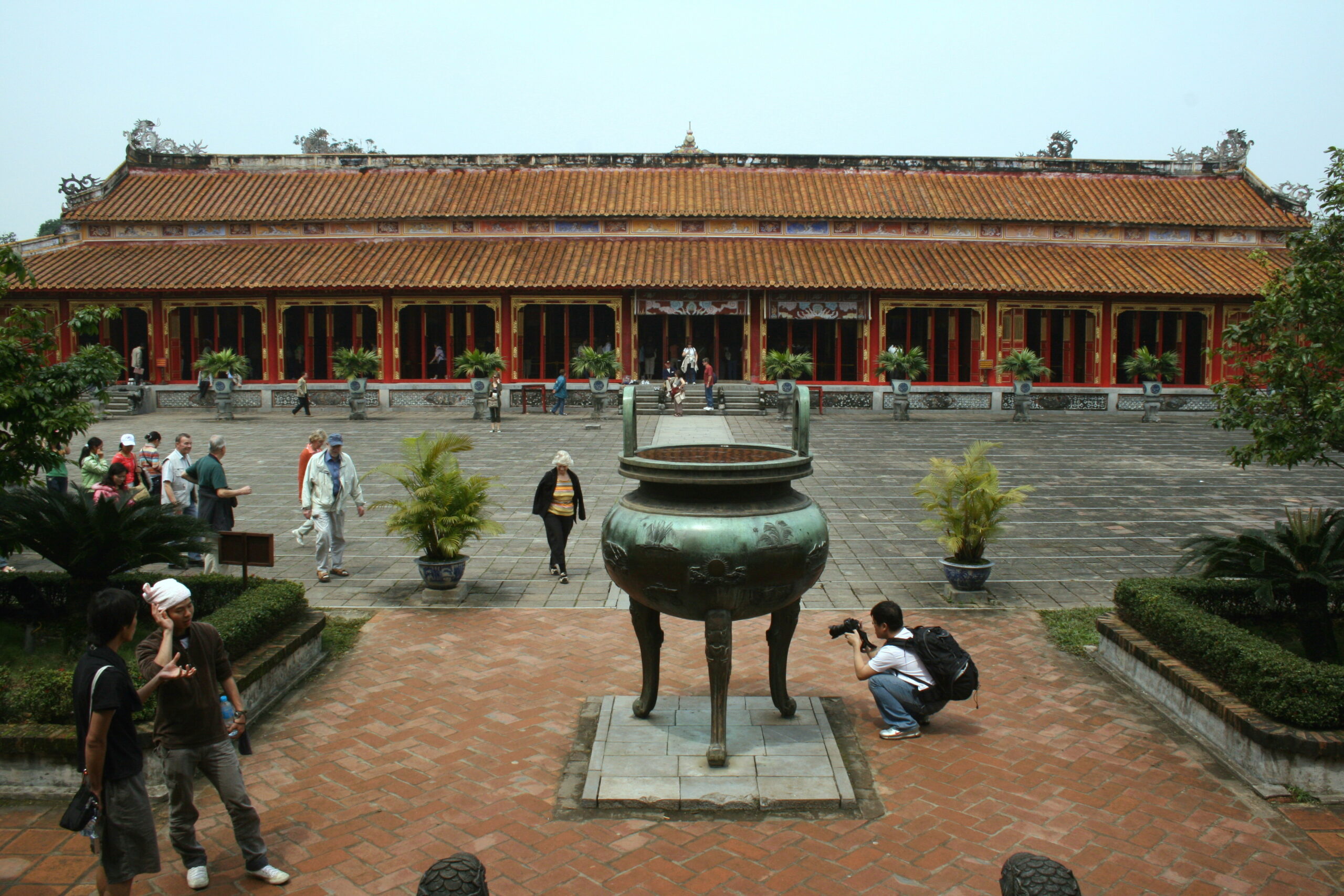 To the south of the Queen Mothers’ residences, you may find a group of temples for worshipping the Nguyễn ancestors. Among them, the most attractive one is Thế Tổ Miếu.

The temple was first built in 1821 under the reign of emperor Minh Mạng to worship Gia Long, his father. ThếTổ Miếu, together with Thái Tổ Miếu worshipping the Nguyễn Lords, were the largest among all temples, though the latter is now destroyed. The Thái Tổ Miếu include smaller halls and pavilions, all cleverly refurbished with delicate flower details and vivid figures. The builders also used bricks and tiles from the famous Bát Tràng Village in Hanoi. 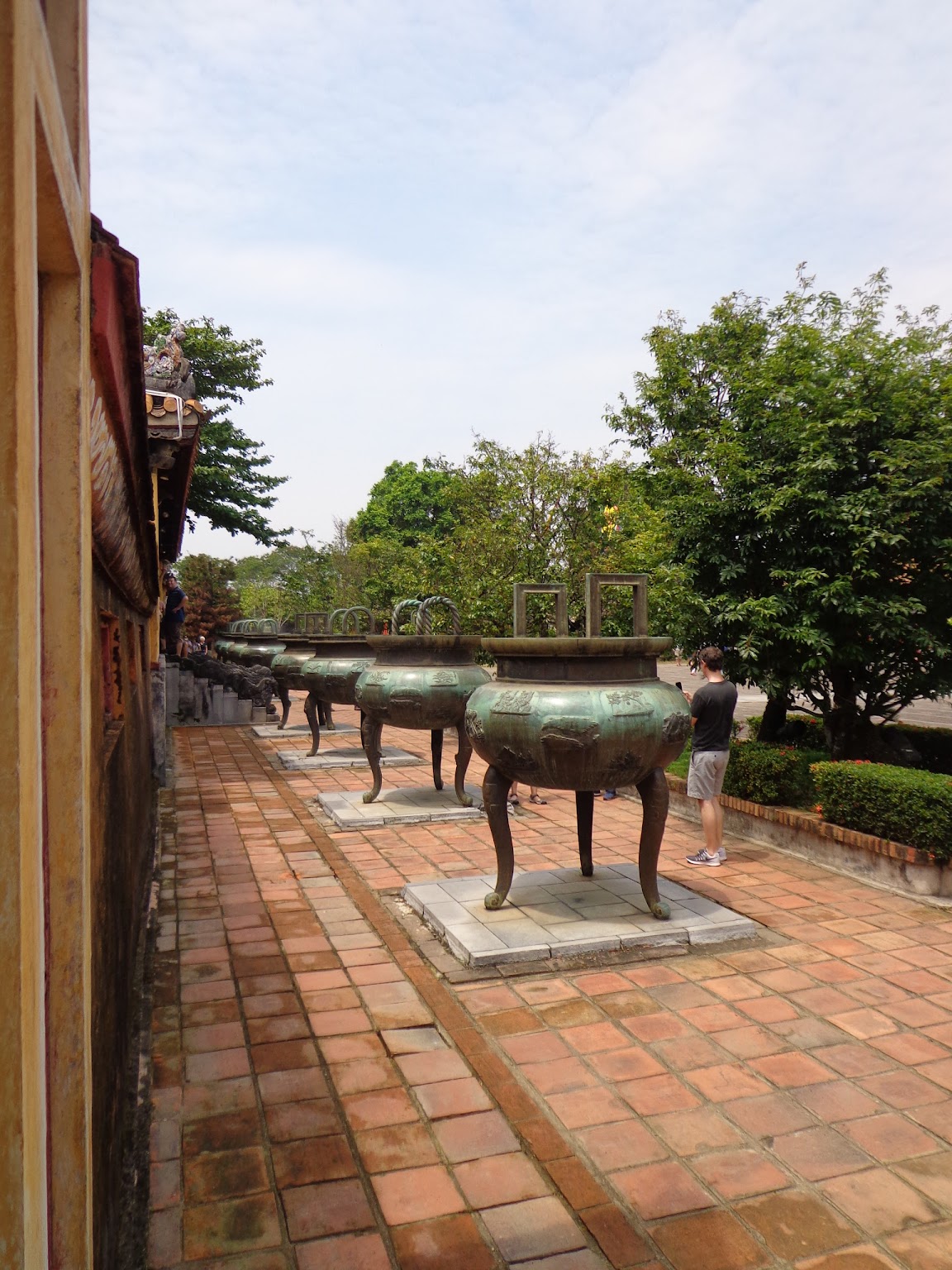 Moreover, you should not miss the Cửu Đỉnh, the nine sacred cauldrons put evenly on the yard between Thái Tổ Miếu and Hiển Lâm Các. They are nine bronze cauldrons made at Emperor Minh Mạng’s behest.

Each cauldron was decorated with different local images such as flowers, plants, animals, natural phenomena, rivers, weapons and means of transport. Each cauldron has a distinctive name, weighs about 4 tonnes and is about 2.5 meters tall.

Huế Citadel is a massive imperial building complex where you can explore many aspects of the last dynasty in Vietnam’s history. Though many of them have been destroyed due to harsh wartime conditions, the remaining halls and palaces are all gems filled with historical and aesthetic values.

With more investments from the government and non-governmental organizations, the reconstruction of many lost buildings is now underway. 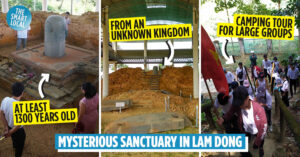 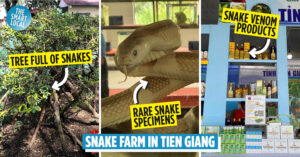