About the World Gourmet Summit 2014 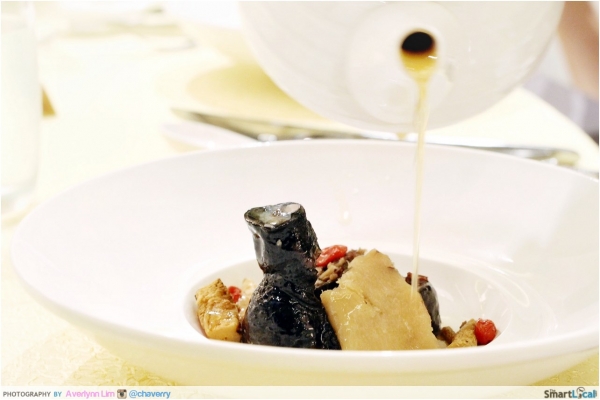 Singapore’s foremost gourmet culinary event returns with a twist in its 18th year. The theme of this year’s WGS centres around “The Classics” and promises to satisfy the most discerning palates with unique touches imparted to fine cuisine which aficionados would appreciate.

Happening from 26 March to 5 April 2014, Singapore will be set upon by world-renowned Michelin-starred chefs who will be paired with hosting chefs at 13 establishments including Majestic Restaurant, The White Rabbit, Regent Singapore and SKIRT. There will also be 22 partner restaurants that will present exclusive World Gourmet Summit menus available only during the nine days the summit runs for. You can also expect exquisite wines from the world’s leading vinters.

As one of the hosting establishments for this year’s WGS, Majestic Restaurant will be hosting a special Eu Yan Sang dinner on the 31st of March, 2014. The menu centres around “Modern vs Classical” and it will feature celebrity Taiwanese Masterchef Aaron Huang and the award-winning Majestic Restaurant’s Chef Yong Bing Ngen.

In collaboration with one of the leading healthcare and wellness companies in traditional Chinese medicine, Eu Yan Sang, the dishes will feature a variety of premium herbs of the highest quality. Chinese medicine can have quite a strong taste so we were curious to how exactly the dishes would turn out. We wondered if they could be seamlessly integrated with the Cantonese cuisine of Majestic Restaurant after being infused with Chinese traditional medicine.

Here were some of the highlights we were treated to at a sneak media preview of the event. 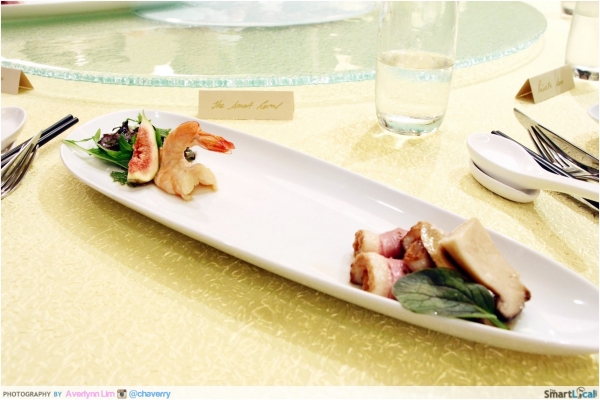 For starters we had Fried Roast Duck Breast and Shrimp which was accompanied with EYS’s Chinese Angelica and Licorice. Chinese Angelica, or more commonly referred to Dang Gui, is of a warm nature, and it helps to nourish the blood, relieve dryness, promotes bowels, regulates menstruation and reduces pain.

I enjoyed the thin strips of duck meat that weren’t too gamey paired along with the two medicinal herbs which lent a subtle bittersweet aroma to the dish. 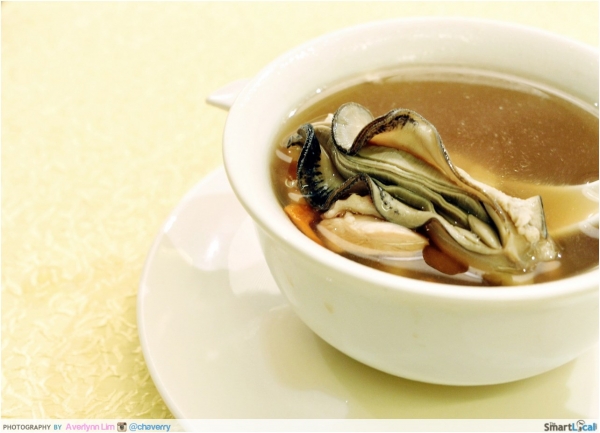 As we all know, the Chinese are really good with their soups, and the next dish didn’t disappoint a wee bit. The Doubled Boiled American Ginseng soup combines a flavorful double-boiled broth filled with a chockful of ingredients.

Unlike the usual MSG-laden broths you get outside, this one is steamed with Chinese herbs like Chinese wolfberries, American ginseng and Chinese yam. American Ginseng is common in meat-based broths and even though adding clams is an unusual choice, the three ingredients interact well together, giving the soup a special sweetness. 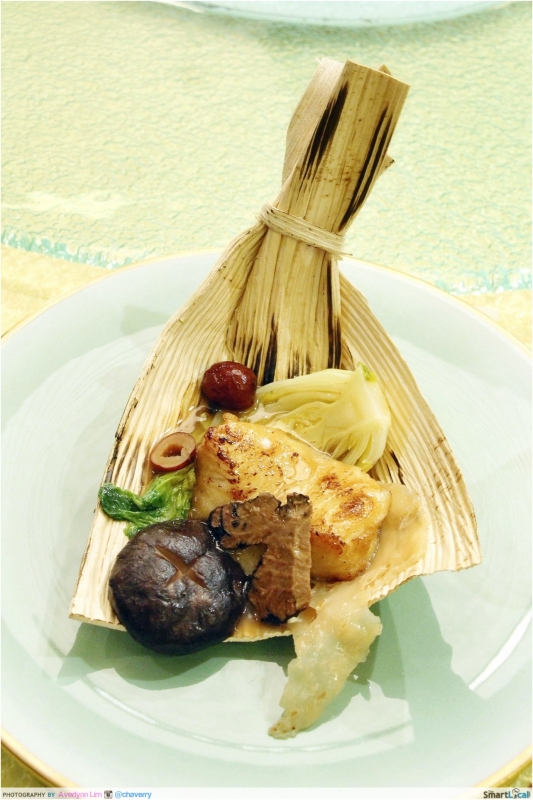 Served in a traditional fashion of using an opeh leave folded to look like a Sampan boat, a Sea Perch fillet that was slightly charred on the outside but with smooth and soft layers that slid easily into your mouth. The Cnidium herb used here has health benefits similar to the Chinese Angelica. It is warming and supports the qi, tonifies the lungs and nourishes fluids in the body. 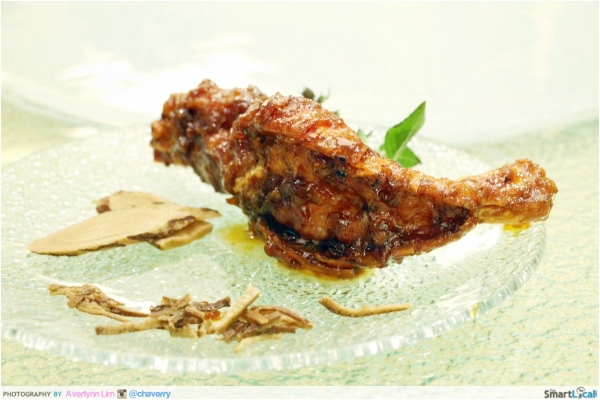 This had to be my favourite dish out of all. The king prawn came coated with a luscious paste which was slightly sweet and went really well with the fleshy king prawn which oozed juices when sliced. Sweet and sour prawn lovers would love this. Accompanied with tangerine peel, the slight tang helped to cut through the heaviness from the prawn. 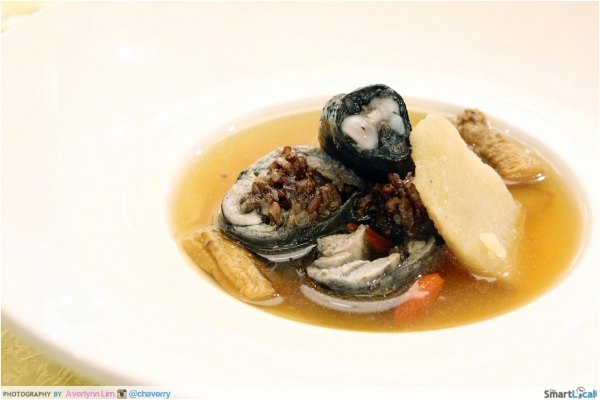 Because of the nutritional benefits of Bak Foong Pill with regards to a woman’s constitution, many women are regular takers of it, including myself. The pills come in different versions, depending on one’s preferences. Here, the chefs cleverly incorporates EYS’s Bak Foong Pill, one of the key ingredients in this menu into this dish, with brown rice and stuffs it into tender black chicken pieces.

Finally, it was time for dessert! 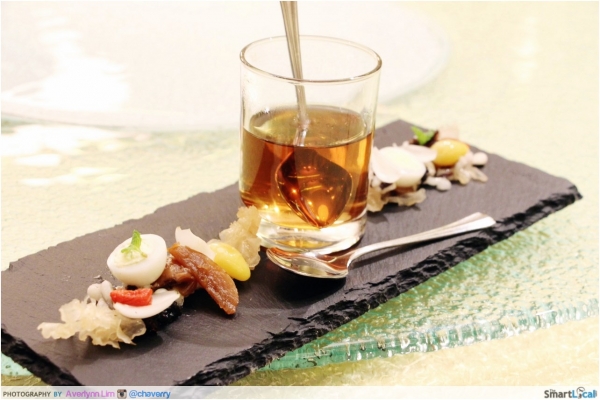 What caught my eye was the stellar presentation of this Herbal Tea which was plated so beautifully. The Eight Treasures which also consisted of the unique addition of a quail’s egg were artfully placed on the serving dish. Though I felt the herbal tea could be a tad less sweet, this dish on the whole did not fail to impress.

A healthy lifestyle begins with healthy eating and this menu showcases exuberant flavours together with Traditional Chinese cuisine. I was truly left satiated by such a nutritionally dense yet delectable meal.

With all these international award winning Masterchefs coming to Singapore, they’ll likely to be able to whip creations of similar uniqueness and high standards at the various establishments. Of course, such gastronomic indulgences are priced accordingly. The Eu Yan Sang dinner which will be held on the 31st of March 2014, is priced at SGD$188++.

For more information and bookings, you can head over to the official World Gourmet Summit page.

Disclosure: Media Invitation. Want to be featured on TheSmartLocal? Contact us.