Hidden gems amongst slabs of concrete 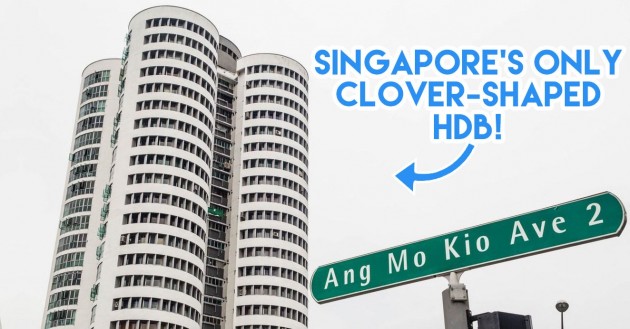 Although the majority of Singapore reside in flats, we often take our homes for granted, and rarely take notice of the uniquely-designed HDBs in our midst. Instead of looking up, we look down at our phones, eyes fixated, fingers constantly scrolling – on bus rides and while walking home. We chase down shiny, newfangled architecture – from Marina Bay Sands to Henderson Waves, wanting to capture the most photogenic shots for our Instagram.

But that just means many fail to see beauty in the ordinary, so clearly evident right in our neighbourhoods. Well, we did. And we’ve noticed some quirky HDB block designs that stand out from the uniform lines of grey. 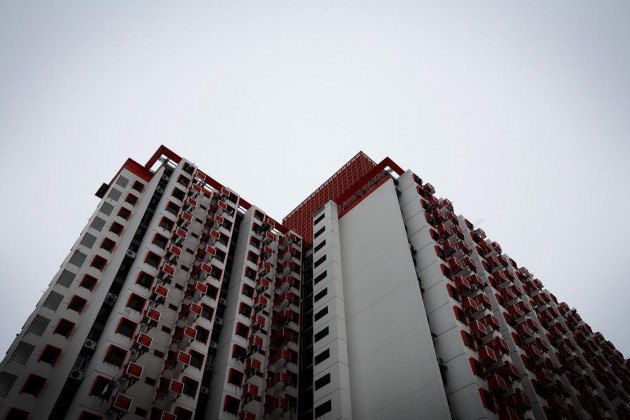 With skyscrapers overcrowding the CBD, a 20-storey building is easily overshadowed. However, back in the 60s, Block 9 in the Selegie House cluster was the tallest public housing complex in Singapore, giving the residents an expansive view of the city. Shops at the void deck used to be bustling with business, and there was even a nightclub in the area! 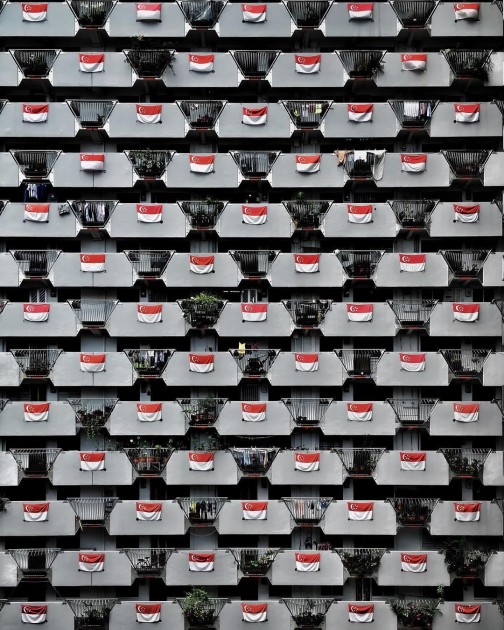 Although the estate is no longer as happening as before, these blocks now are appreciated for the tessellation of concrete and steel on its corridors, and its striking red and white colour scheme that only came about after upgrading works in 2002. Which makes this block the epitome of patriotism, when complemented with red and white flags during National Day! 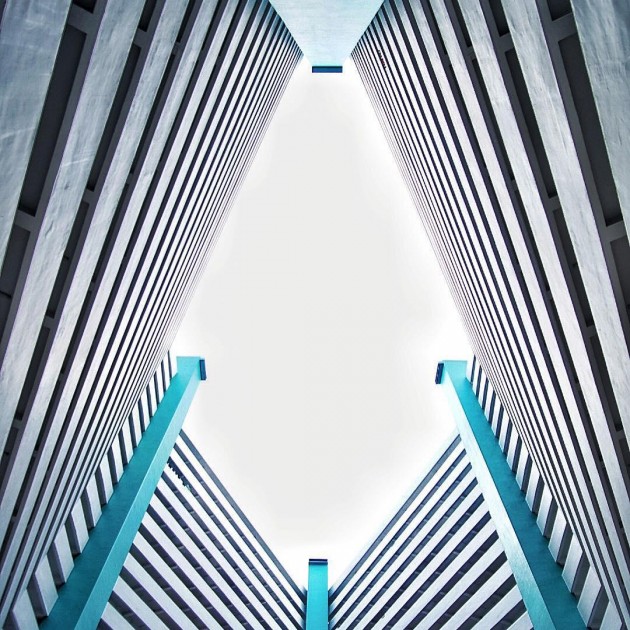 The pride and joy of Jurong in the 70s, this diamond-shaped cluster of blocks once towered over neighbouring flats at 21 storeys high. To think this legendary beauty was nearly demolished – we thank our lucky stars that it never happened. Or else we wouldn’t have come across photos on Instagram reflecting its clean, sharp lines. 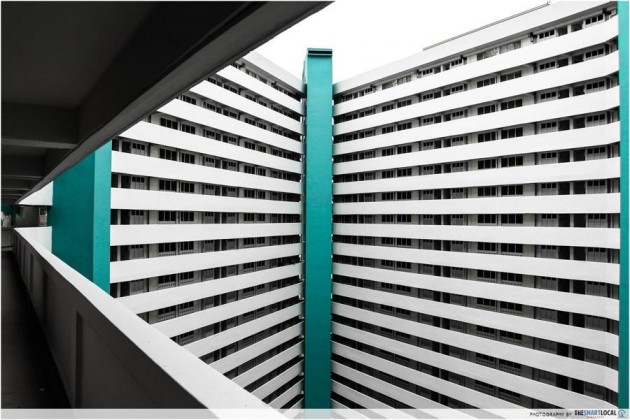 In recent years, the apartments have been rented out to lower income families and foreign workers, and is currently undergoing renovation for PPHS (Parenthood Provisional Housing Scheme). With most of the residents moving out, the place is more ulu these days, so if you’re planning to head down, we suggest that you go with a group of friends for company. 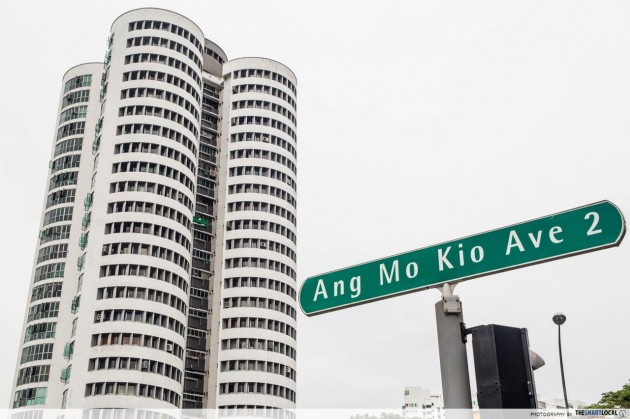 The only clover-shaped block of flats constructed by HDB, Block 259 was an experimentation with design and architecture by our public housing board in the late 1970s. They were on a mission to break the monotony in HDB flats, and to create identities for every housing estate, shifting away from uniform rows of blocks. But what happened to the mission remains a mystery, because this clover-shaped block of flats is the first, and the last of its kind to appear in Ang Mo Kio. 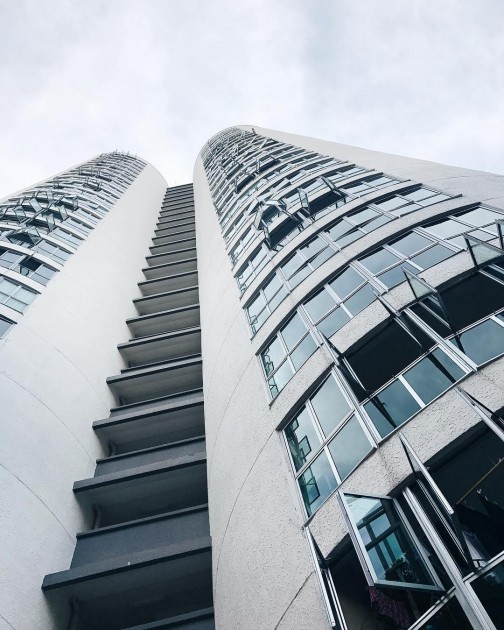 When I first visited this block, my first thought was, “How do the residents arrange furniture in their houses?” Indeed, back in those days, interior designers and renovation companies were inexperienced in dealing with odd-shaped houses, and the only solution was customised furnishings, which meant that homeowners had to spend more dollars on renovation. 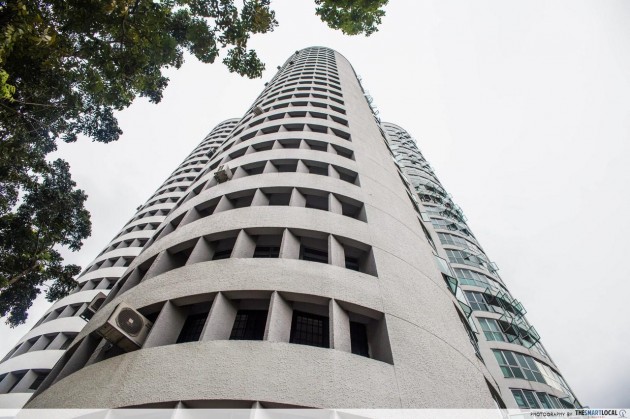 Some criticised the curved walls for being impractical, due to the additional renovation costs. But we think those naysayers are eating their words now, because where else in Singapore can you find a flat with sweeping views of Bishan Park and Peirce Reservoir? 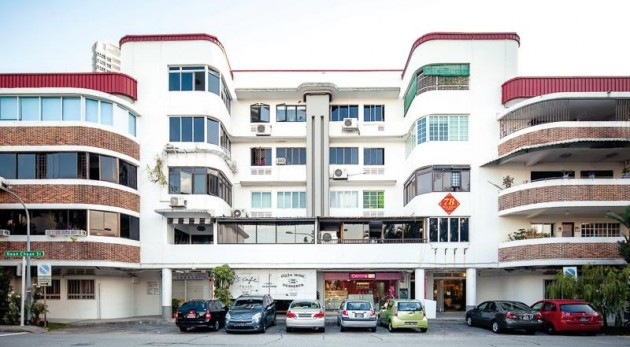 The next time you’re in Tiong Bahru, skip the cafe-hopping, and uncover the estate’s rich heritage instead. While all SIT flats within this mature estate resemble each other, Block 78 tells an intriguing story that we’ve never come across in our history textbooks.

That’s because here, a single block has 3 different addresses. Having different road names in their addresses sounds ridiculous, but the residents here have lived with this quirk for decades. Block 78 stretches along 3 roads – Moh Guan Terrace, Yong Siak Street, Guan Chuan Street – in a horseshoe shape. Lost mail and confused visitors are common here, and some blame the colonial government for the building’s eccentric infrastructure. 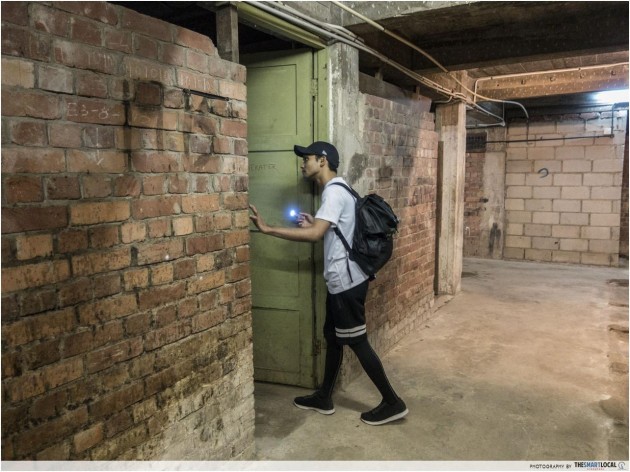 An air raid shelter built in preparation of WW2, but was rarely used.

Even more interestingly, under the block hides an air raid shelter that’s accessible from Guan Chuan Street. Built by the British in preparation for WW2, this red-bricked shelter was designed with play pavilions that could be converted to first aids posts when war broke out. 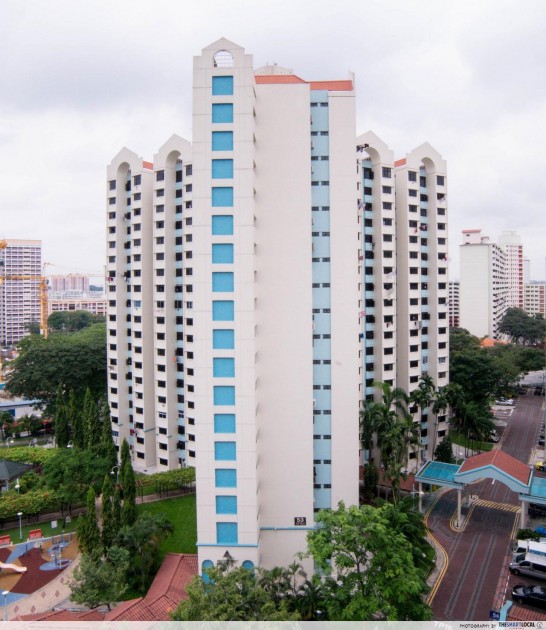 My dad has driven past this block countless times, and I’d sit in the car, barely sparing this ordinary-looking block a glance. After all, there’s nothing fancy or special about the building’s facade. But take a look from above, and you’ll get why this block of flats is unique in our books. 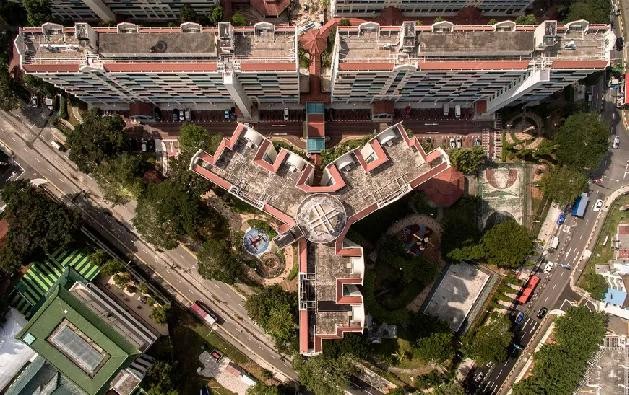 Check out that Y-shape, formed by 3 interlinking corridors, which earned its nickname “Y-shaped Block”. At 19-storeys high, this block once towered over the neighbouring blocks, but is now dwarfed by the numerous newer 40-storey flats in the estate. Out of all the HDBs in Singapore, this is probably the only block that has a viewing gallery on the rooftop! This special addition was created for Queen Elizabeth II, who was treated to a panoramic view of Singapore in 1972. 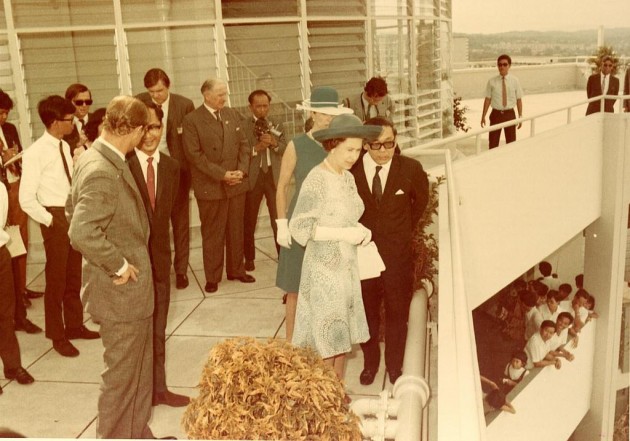 Most of us have heard of the story of her visit, but it never occurred to us that Block 53 is still standing strong along a narrow lane in Toa Payoh, more than 40 years later. Unfortunately, the rooftop is now out of bounds for the public, but if you know of friends living here, test them and see if they know that they’re living in a block that was once graced by a Queen. 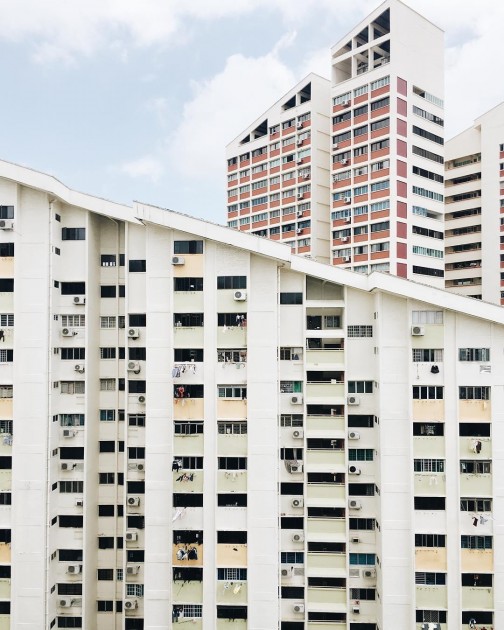 Potong Pasir isn’t just a known for being a longtime ward of an opposition party, but also a town with a closely-knit community. While the estate feels less urbanised, it’s precisely this old world charm that makes the estate cosy and warm. 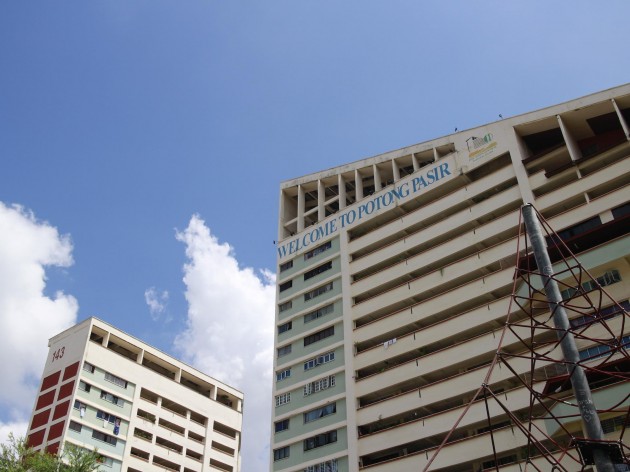 Driving on the highway along Potong Pasir, you’ll be greeted by “Welcome to Potong Pasir” painted in blue block letters on Block 142. This block, like many others in the neighbourhood, has a distinct ski-slope roof – a trademark of the estate, also proudly reflected in the Town Council logo. There’s no sensational story behind the design – it simply boils down to HDB wanting to create identities for the different housing estates, by constructing flats with prominent features.

We’re intrigued by the structures of the homes tucked directly under the sloping roofs, because they are only accessible by a separate flight of stairs, and the home owners even have a lift lobby dedicated to them, right beside their balconies. This is the kind of privacy that even condo penthouse owners aren’t guaranteed of. 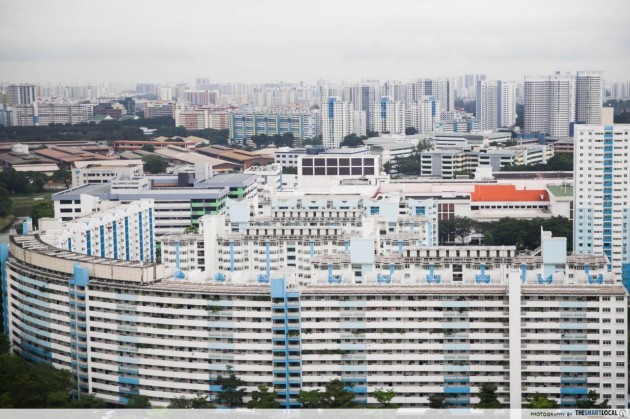 Older HDB flats usually have longer corridors than new generation flats, but none can beat Block 34 in Whampoa West. At about 320 metres long, this block boasts the longest corridor in Singapore. To things into perspective, that’s the length of 160 doors linked together horizontally. If we were kids living in this block, we’d already be riding our scooters from one end to the other!

Also, a long block means more room for many shops on the ground floor. The residents here have a wide range of food options, as tucked under the block is a slew of eateries, from cafes to zichar, and of course, the famous chicken rice restaurant, Boon Tong Kee. 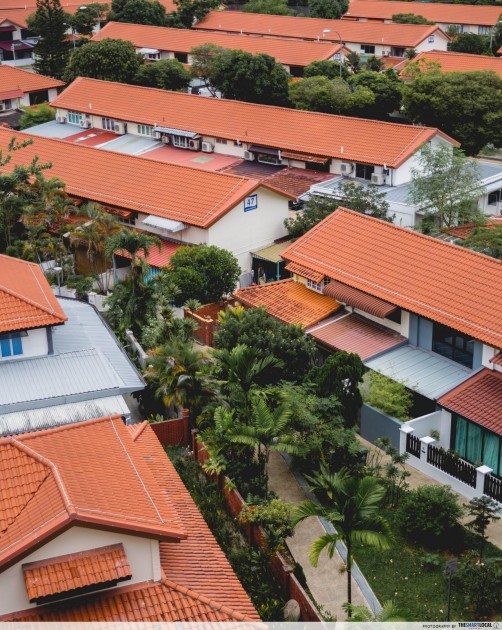 Walking past these homes along Stirling Road and Jalan Bahagia, you’d think that they’re terrace houses. But take a closer look, and you’ll spot the HDB block numbers on the side of these rows of landed units. We were equally baffled when we first chanced upon these homes, wondering if HDB has ever built landed property. 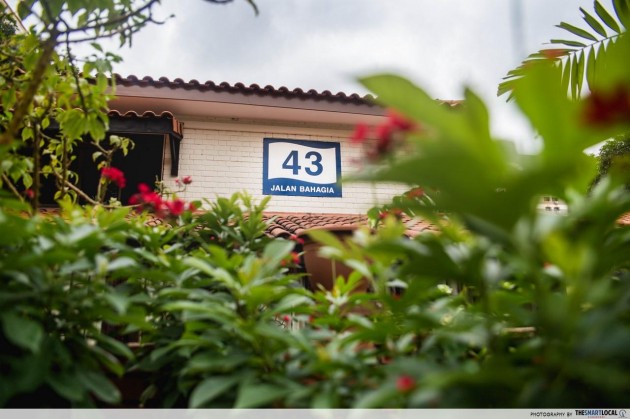 Turns out these are HDB terrace houses were constructed by Singapore Investment Trust (SIT), HDB’s predecessor, in the 1960s. If you’re thinking of getting such a home to grow a bed of roses in your lawn, you might wanna reconsider – a unit can cost as high as a million dollars, and they don’t come by easily! 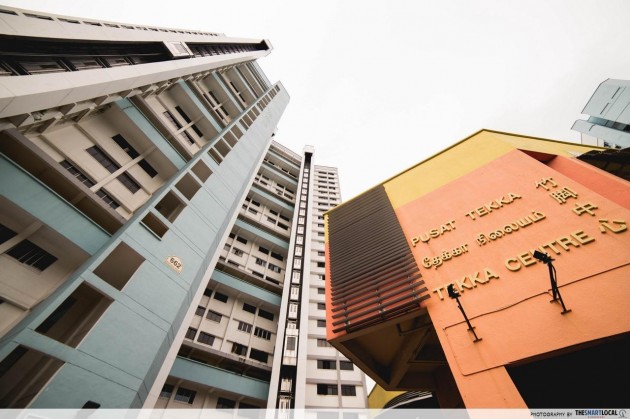 As part of HDB’s lift upgrading programme, the cluster of blocks near Tekka Food Centre were selected for pilot-testing the installation of bubble lifts in public housing. Bubble lifts were once only found in shopping malls and hotels, and now that’s no longer the case.

When the lift ascends, you gaze out of the window to a flurry of human activity below. That can be quite therapeutic for residents returning home from a long day’s work. And definitely a blessing for those who are claustrophobic – especially if the lift breaks down. 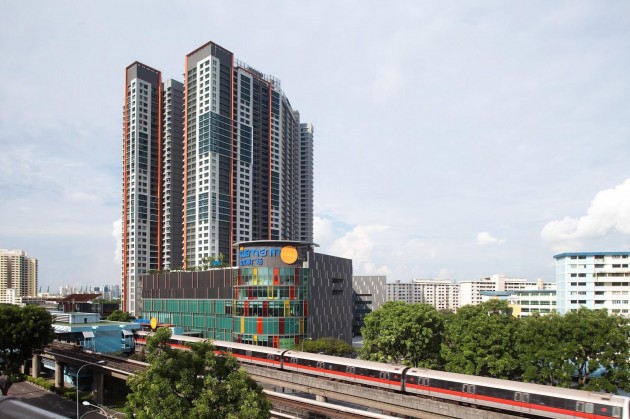 When hunger pangs hit at midnight, they just grab cup noodles from the supermarket downstairs. When they oversleep, making it to work on time is still a possibility, with the MRT station on their doorstep. And when the air is a burning hell during the haze season, they save on electrical bills by cooling off in the air-conditioned mall downstairs, instead of turning on the air-con at home throughout the day.

That’s the kind of convenience that the residents here live with, being the first HDB homeowners to enjoy the luxury of having the MRT just a 5-minute walk away, and The Clementi Mall right at their doorstep. We sure hope there are plans for more of such flats to be constructed – you gotta snap up a unit if that ever happens.

HDBs can be works of art too

There’s a common perception that plain ol’ boring HDBs can’t hold a candle to the glitzy skyscrapers that dot our skyline. Well, I’m guilty of that thinking too, until I took a good at my surroundings while traversing our urban concrete jungle. From then on, I began to unsee HDBs as a sea of homogenous, compartmentalised apartments, and instead see them as individual works of art.

So why don’t you do the same – slow down, smell the roses, and take a mini road trip around Singapore to discover the beauty of these unique HDBs.