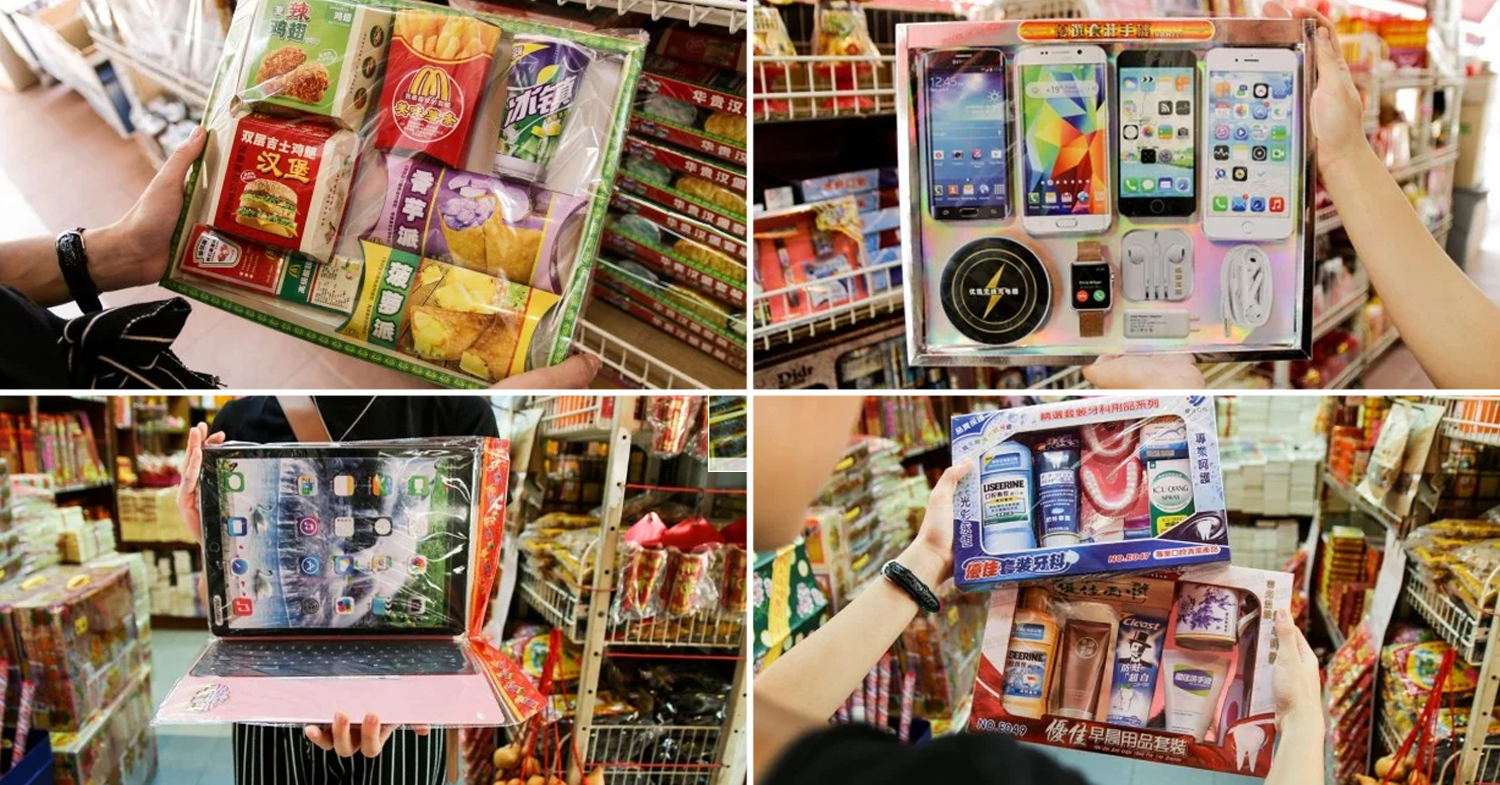 We’ve all heard the stories, that’s probably why most of us make a conscious effort to head home earlier than we normally would this time of year. We’ve been warned to stay out of the water, avoid whistling once the sun has set, and to only dry our laundry in the day or risk spending the night with some uninvited guests.

While the thought of a hoard of spirits roaming the streets might make you want to lock yourself in your room for 30 days straight; some see it as a chance to pay homage to their deceased loved ones, others burn heaps of paper money to appease wandering spirits so no harm befalls them. For joss paper merchants, the Hungry Ghost Festival means serious business. 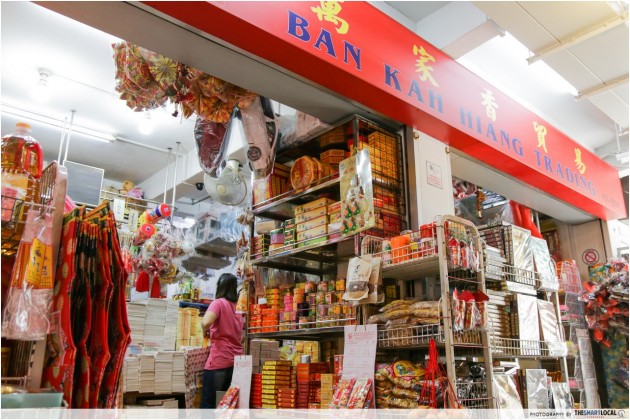 Revered as a dai gor (big brother) of the Chinese joss-paper industry in Singapore, Ban Kah Hiang Trading is a paper merchant that’s been keeping the hungry ghost flames alive for more than 60 years. Nestled within a quiet stretch of stops at Jalan Bukit Merah, the shop front is one that you will not miss. 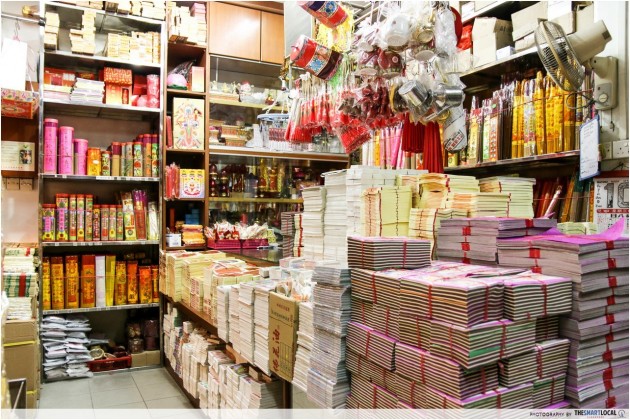 Surrounded by waist-high stacks of multicoloured joss paper and an inventory of paper items so extensive it almost felt like a downsized Robinsons departmental store, the shop is well stocked and ready to tackle the crowd this 7th month.

Within minutes of entering the shop, we found ourselves ushered into a tiny air-conditioned office by a bubbly Mr Alex Teo, who just took over his father’s business at the start of the year. Over the next 20 minutes or so, we dug deep and uncovered not only how they started their trade, but how the brand became the only wholesale supplier and exporter of kimzua in Singapore. 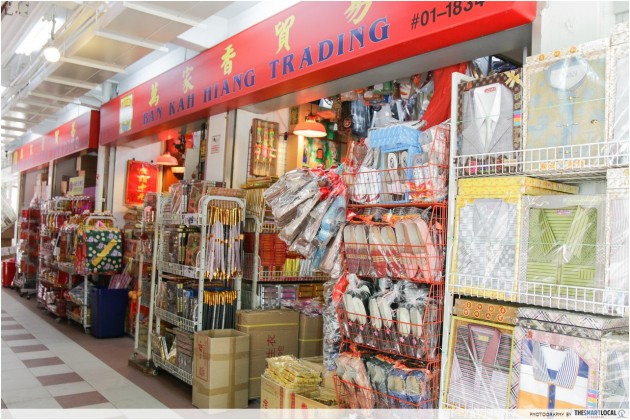 During the lunar 7th month, generic kimzuas such as hell notes and paper clothing are burnt to appease wandering spirits widely known as ho hia ti or Hao Xiong Di (Good Brothers). These souls are thought to be those who were not granted a proper send-off into the afterlife or have been forgotten by their descendants. Burning offerings for them is a way to avoid misfortune and ward off evil.

Mr Teo explains that the meaning of burning paper offerings have changed a lot from it’s ancient origins. Previously, paper was casted into flames to show that material possessions and money could not be brought into the afterlife. However, the symbolism of burning kimzuas has since evolved to today’s popular subscription where people burn paper gifts so their ancestors could receive and use them in the netherworld.

Even though trendy kimzuas are more popular during the Qing Ming Festival (Tomb Sweeping Day), people also purchase them in the 7th month hoping that the wandering ghosts get to enjoy them as well.

Not as modern as your Pokemon Go, but we’ve found 10 pretty impressive and totally Singaporean paper kimzuas to prove that the dying trade isn’t as outdated as you think it is.

Note: Precisely because nothing in the underworld should sound like their versions in the realm of the living, the typos that you see in their paper products are fully intentional. 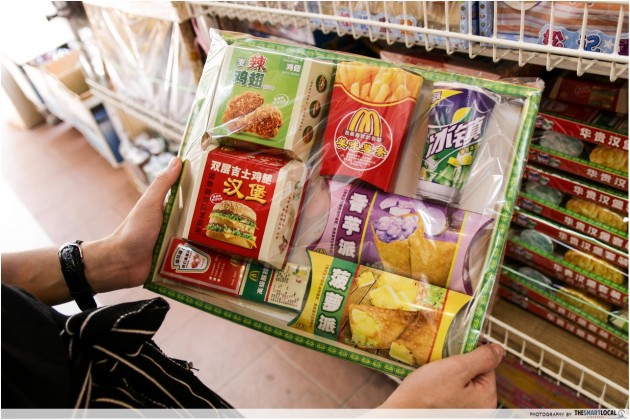 Nothing seasonal or slathered in salted-egg yolk, just what we’ve known the fast food chain for. Pretty old school, but this set’s got the 1980s -1990s version of our favourite McDonald’s classics. I remember the days they had fried drumsticks on the menu. Taro and pineapple pies were also a hit when I was in primary school – they should totally bring these back. Luckily in the realm of the Living, we still have Burger King to count on. 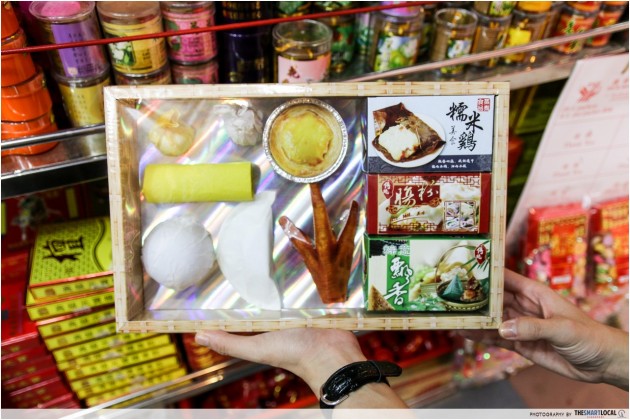 This was one of the most surprising food creations we found as it contrasted the common paper roast meat and steamed chicken.

3. Canned Beer and F&N drinks we all know 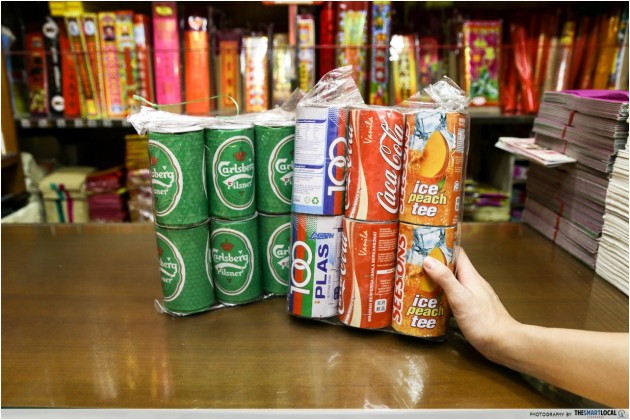 Paper canned beers and stout have been available for many years. You might have seen them before, but what was truly intriguing was how legit these canned soft-drinks looked. Fraser & Neave (F&N) is a recognisable Singaporean brand, and it would have been impossible not to have tasted at least one of their signature drinks growing up. I even recognised that Subway’s drinks dispenser had Seasons Ice Tea when the labels were not done up yet.

With only a change in spelling, the changes have been make so subtly that you might just mistake it for the real deal. 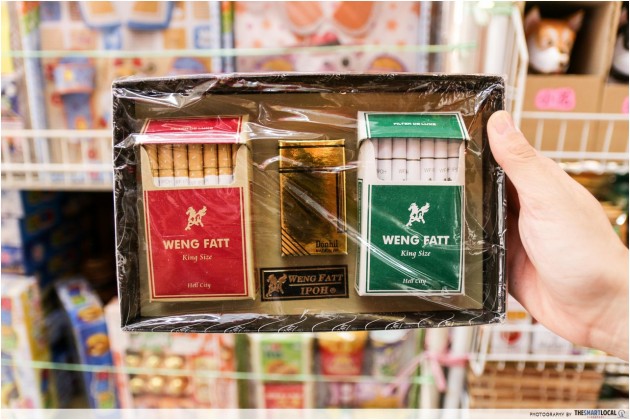 Cigarettes are also common in modern kimzuas. The range is not as extensive to include the usual brands like Marlboro and you don’t get to choose a menthol of choice, but the effort that goes into making each single cigarette for this set is worth commending. They also provided a classy Donhill lighter. 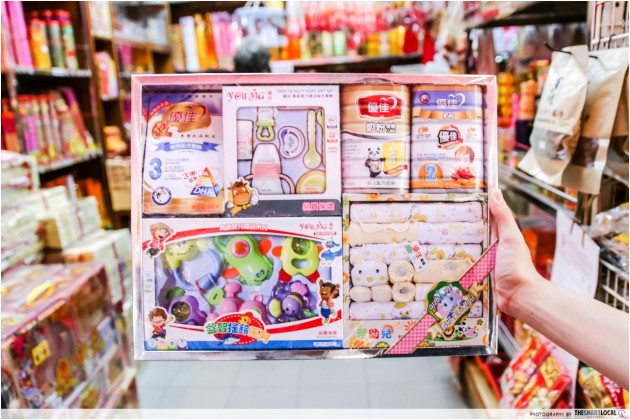 This set broke my heart a little. A package for babies and toddlers, it not only has infant formulas, milk bottles and a full set of baby clothes – but also toys to keep the little ones occupied in the afterlife. This was only one out of the many items in Ban Kah Hiang’s Children’s Department.

You’ll now be able to sleep in peace without worrying about the sound of marbles rolling around in the unit above you. 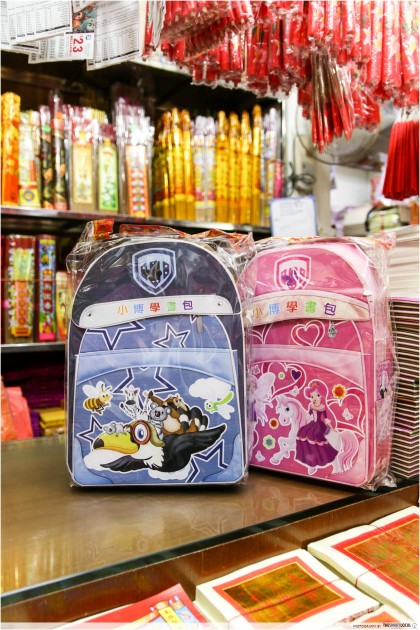 Most of us spent some part of our childhood toting these trendy schoolbags. But for the less fortunate, life’s simple pleasures don’t come easy. For $3.50 each, these bags give ghost children a second shot at happiness, and even come with real straps at the back for them to carry around. Sporting a cool bag is not something only exclusive to the Living. 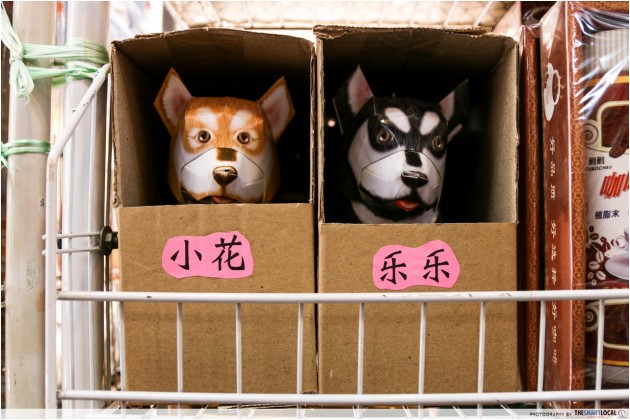 You’ll never miss these cuties on the rack. It was interesting because I’ve never seen pets at a paper merchant before. Mr Teo explained that they were exclusive to the brand and he even printed the names himself. Xiao Hua (Little Flower) and Lele (Happiness) were common names for children and pets that Chinese used in the past. Unlike avant-garde names like Oreo or Fluffy today, these names were simple enough for your ancestors to understand.

His decision to get these paper pets made was due to local demand and he constantly think of ways to inject modernity into the old trade. He looks at ways he could evolve existing products to keep the business current and relevant to people. Precisely because young faces are difficult to come by in this line, we find his commitment to add personalized touches into the business simply admirable. 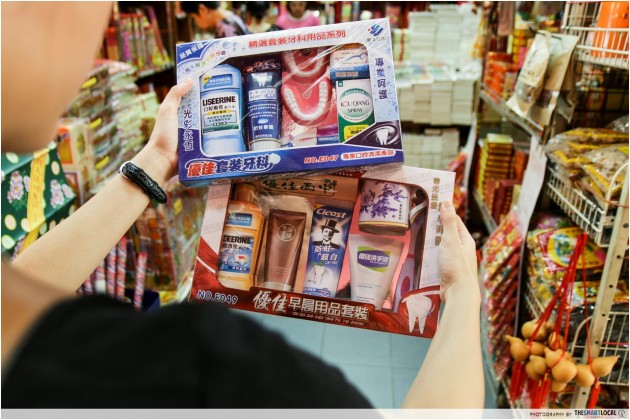 The store is also home to a fine range of perfumes, grooming sets, and bathroom must-haves. When we saw their descendants of Cetaphil and Crest Whitening toothpaste, we knew we had to feature this in our top 10.

These US brands might not be as popular as Singaporean household brands such as Darlie, but its place in traditional Chinese rituals sure asserts the outreach of the contemporary. 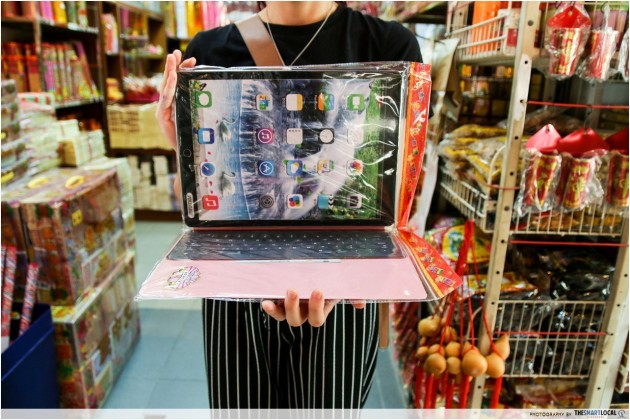 Available in four colours (blue / pink / gold / silver), this $4 Apple Macbook Pro dupe proves that paper product suppliers are trendy as hell. Computers are no longer two-dimensional cardboard pieces printed with logos. Open this, and you will be greeted with a full-keyboard panel. When closed, the usually-lit Apple logo is also an exact replica. It might be paper, but when set on fire, it should reach your loved one with the latest OS X El Capitan installed. 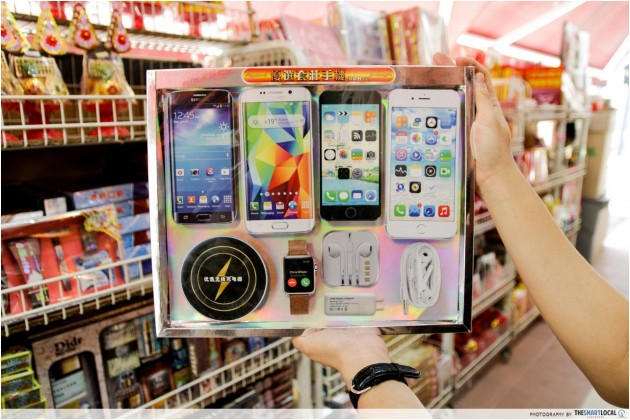 Just because the kimzua business is a dying trade doesn’t mean you’ll be stuck with your t-rex Nokia 3310 playing Snake all your afterlife.

I’m sure you’re familiar with the Smsung or iPhone dilemma, but this set neutralizes all bitterness to give you the best of both worlds. I kid you not, but that Smsung Edge on the extreme left really does have curved edges.

Mr Teo believes that the dead deserve the best too and explained how some products go easy on the wallet but are flimsy to the touch. He would never compromise on quality even though these paper products are meant for the flames. Even the buttons in his paper garment sets are real.

10. Money to last you another lifetime 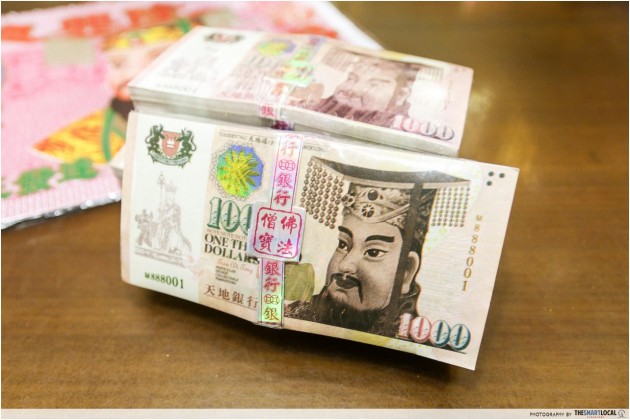 This was our last – yet most Singaporean – find at Ban Kah Hiang. With our eyes set on scouting out the most interesting pieces of modernity, we almost missed this inconspicuous stack near the cashier.

Hidden between wads of hell money with numbers too inflated for someone not blessed in the Math department like myself, I had to do a double take to register what this really was. Yup, cold hard cash with the face of Singapore’s First President replaced by the Head of the Hell Bank Corporation. An original Ban Kah Hiang creation, you won’t find this gem in any other kimzua store.

With this legal-tender in the netherworld, it’ll be easy spotting a Singaporean. 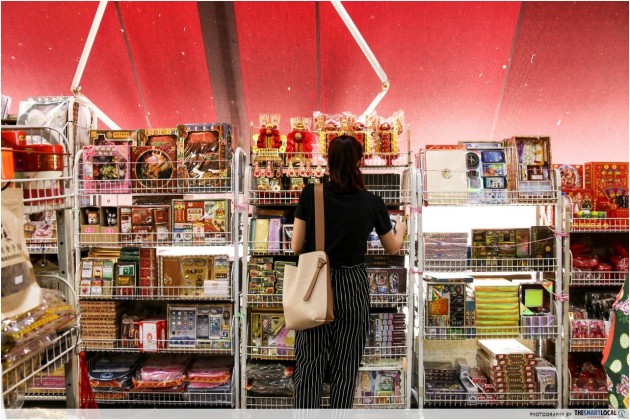 An hour in a traditional kimzua shop could change you a little, or a lot. I’ve never looked at paper in ways this moving. This bustling little shop, is the face of not only a fast-dying trade but a cradle of many stories waiting to be told.

Most people would avoid such places during the 7th month, but we left Ban Kah Hiang feeling more heartened than fearful.

So the next time you walk past a kimzua shop, don’t feel afraid to linger. Besides, just because they sell things for the dead, doesn’t mean the dead do the shopping – pay Ban Kah Hiang Trading a visit the next time you’re around Bukit Merah!