Update: The original “Top 7 Food to eat” article by Shalene has been expanded and will now contain the top 20 food to eat in Singapore! Full write-ups will be added in soon.

Presenting, the Top 20 Food to Eat in Singapore! (In no order)

If there’s one thing that Singapore is famous for, it has to be its food. Singapore definitely isn’t the best in terms of shopping or sight-seeing, but it’s undeniably one of the best when it comes to food. Believe it or not, many foreigners and tourists actually visit Singapore mainly because of the food! Unsure of what you should try while here and where you can find them? Here’s a list for you. 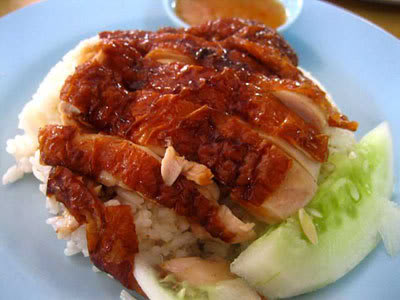 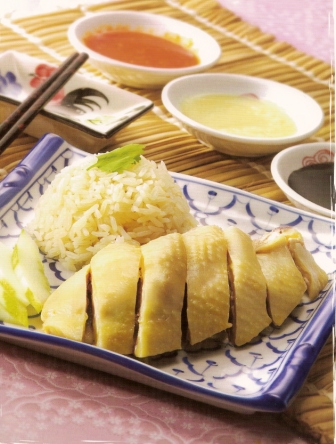 The unique thing about chicken rice is its rice. It isn’t the usual plain white rice we eat on a daily basis; instead the rice is cooked with chicken broth. When cooked well, the rice is absolutely fragrant and tasty, to boot. However, with great taste comes great sin – chicken rice is also a very sinful dish because of all the unhealthy preservatives that are thrown in to cook such a yummy dish.

Chicken rice is usually served with dark soy sauce and extremely spicy chilli – without any of these, your meal just wouldn’t be complete. The chilli should be as spicy as possible, just the way Singaporeans like it to be. That is when you know you’re eating a true Singaporean chicken rice meal.

Here are some of the places you may like to visit to have your chicken rice fix: 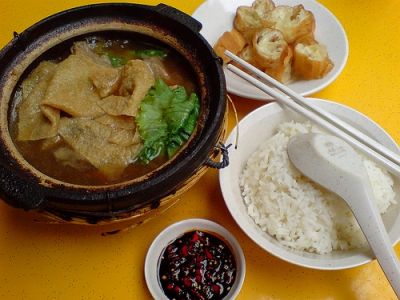 Bak Kut Teh is usually served with a bowl of plain white rice and a pot of tea, which gives one a sense of tradition, but these days many people choose to do away with the tea. You Char Kway is also commonly served together with Bak Kut Teh – the correct way of eating it would be to dip the You Char Kway into the soup before eating it. It is known to compliment the taste of the soup.

Most places which sell Bak Kut Teh also have other dishes on their menu. Some common ones would be Pig Trotters and Tau Kee, amongst others.

You may wish to try the stalls listed below: 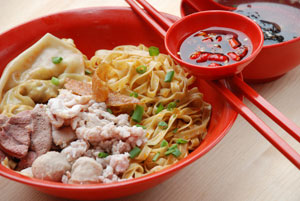 Few people will agree that this is one of Singapore’s top seven must try dishes, but I beg to differ. Evidently, Bak Chor Mee originated from Singapore and I don’t suppose any other country as a dish as unique as our very own Bak Chor Mee. A simple $3 bowl of Bak Chor Mee consists of noodles, some Bak Chor (minced meat), mushrooms, liver and lean meat. What one bowl of Bak Chor Mee is made up of differs from stall to stall though – some stalls may choose to include prawns, fishcakes, fish balls etc.

Although this may appear to be a somewhat “boring” dish that can be easily replicated at home, you will be surprised to know that the Bak Chor Mee “industry” in Singapore is indeed very competitive. There are many stalls vying for the “Best Bak Chor Mee Stall in Singapore” and local variety shows often feature many of such stalls. Is this proof enough of how “Uniquely Singapore” this dish is?

Here are some Bak Chor Mee stalls you can find in Singapore: 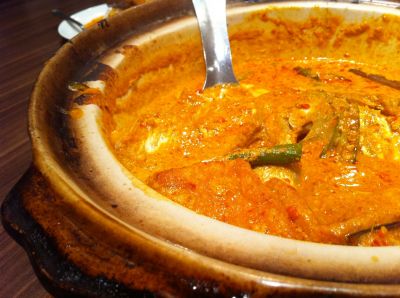 If you haven’t already noticed, Singaporeans are huge fans of spicy food. So it shouldn’t come across as a surprise that Singaporeans love everything to do with curry – curry fish head, mutton curry, chicken curry… You name it, they love it. Of course, dishes like mutton curry and chicken curry aren’t as well-liked in Singapore as the curry fish head, since they are originally Indian dishes and hence are not “Uniquely Singapore”.

Curry Fish Head is usually cooked with lots of coconut milk and spices. A good Curry Fish Head dish should bring out the smell and taste of the spices well, but without it being too overpowering. The amount of coconut milk should be just right as well, because one would very quickly get sick of eating the curry. It should also be sour, because curry just isn’t curry when it doesn’t have the sour aspect well incorporated into the dish. A Curry Fish Head dish, apart from the fish head, normally includes ladies’ finger, onions, tomatoes and brinjals, amongst others, and is best enjoyed with a bowl of plain white rice.

Some Curry Fish Head stalls in Singapore can be found here: 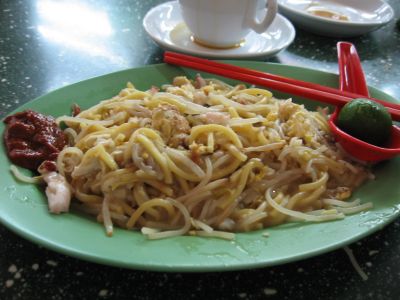 One of the oiliest and unhealthiest dishes in this list, Hokkien Mee is a dish of fried noodles with prawns, sotongs and pork. It is usually served with lime for those who prefer their Hokkien Mee to be slightly sour. Needless to say, lots of oil is used to fry the noodles in order for the noodles to taste as good as they’re supposed to be. And there is not one stall in Singapore that serves “healthy” Hokkien Mee. This is a sinful dish, but absolutely delectable.

Hokkien Mee is usually served with a little bit of gravy, and it is mostly this gravy that makes the dish so delicious.  The noodles used in a plate of Hokkien Mee are a mix of yellow noodles and bee hoon. Some stalls choose to use thin bee hoon, while other use the thick one instead.

Most Singaporeans also love to have their Hokkien Mee with a generous serving of chilli. Again, it is evident that Singaporeans largely depend on the chilli to make their meal complete.

You can try out some famous Hokkien Mee stalls here: 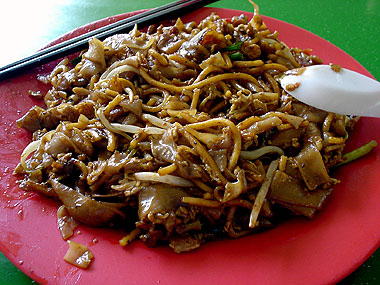 Similar to Hokkien Mee, Char Kway Teow is also a dish of fried noodles, except that the noodles, ingredients used and taste are largely different. As its name suggests, Char Kway Teow is a dish of fried kway teow with noodles, cooked with sweet soy sauce and chilli (and also lots of oil, of course). The ingredients are mainly eggs, cockles and vegetables (“tau gey”), but again this differs from stall to stall.

The thing about Char Kway Teow is that a well fried dish should taste as fragrant as it smells. If it is fried well, it should have a slightly smokey taste to it. To put it metaphorically, you should be able to taste the “fire” in your mouth. Few stalls are able to achieve this aspect, though, but those that do are obviously one of the more famous stalls in Singapore.

However, you will know that you’ve had a bit too much to eat when you start to feel sick (or in Singaporean slang, “jelat”) of the food – this happens mainly because of the sweet sauce, and, to a certain extent, the amount of oil used.

Needless to say, this is a dish as delicious as Hokkien Mee, but equally unhealthy as well. It is important to note that apart from using lots of oil when cooking, a yummy dish usually also requires lots of added preservatives which could potentially give you a guilt trip amidst the satisfaction after finishing a plate of Char Kway Teow.

If all of the above hasn’t yet dissuaded you from trying out this famous dish of Singapore, here are a few places you may like to check out: 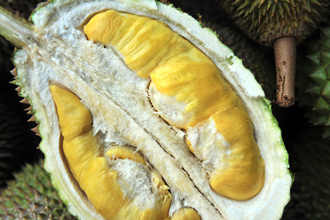 Well, to be fair, this is not exactly a dish but rather a fruit or a dessert. Not exactly originated in Singapore, but very popular in Singapore as well. And I guess it is safe to say that this is commonly shunned away by foreigners and tourists because of its smell, and perhaps its taste as well. Just like how those who aren’t used to the smell of Smelly Tofu cannot imagine the thought of swallowing it, I’m pretty sure this is what resounds in the minds of tourists and foreigners who are introduced to durians as well. All I can say is, don’t judge a book by its cover.

Durians are easily found along the streets of Geylang, but foreigners or tourists shouldn’t go there alone because you might be ripped off by fruit sellers there who target non-locals. They may charge you up to thrice the price of a durian and justify the price by telling you that this is imported from so-and-so country, has lots of meat etc.

You can find durians at the stall listed below: 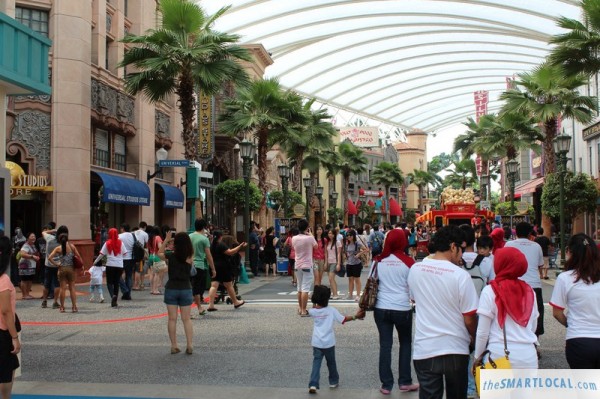 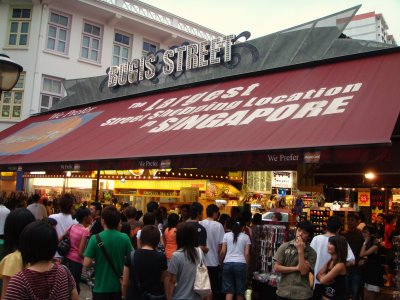