We’ve all heard of big Australian cities like Sydney, Melbourne and Perth. But if the same sights of towering skyscrapers and busy roads are starting to bore you, it’s time for a whole new adventure on untrodden land. Broome is Western Australia’s hidden gem with bizarre sights like dinosaur footprints, horizontal waterfalls and even a Grand Canyon lookalike.

Being a quiet town doesn’t make it any less worth a visit. In fact, here are 10 reasons to visit Broome while it’s still under the radar: If you don’t mind going the extra mile – and we mean literally – to see breathtaking sights, then head down to Purnululu National Park. An overnight four-wheel-drive from Broome will take you to this nature haven, home of the Bungle Bungles.

Wait till the sun goes down and you’ll be able to see the night sky lit up with stars. The experience comes close to stargazing while treading the valleys of the Grand Canyon at night. 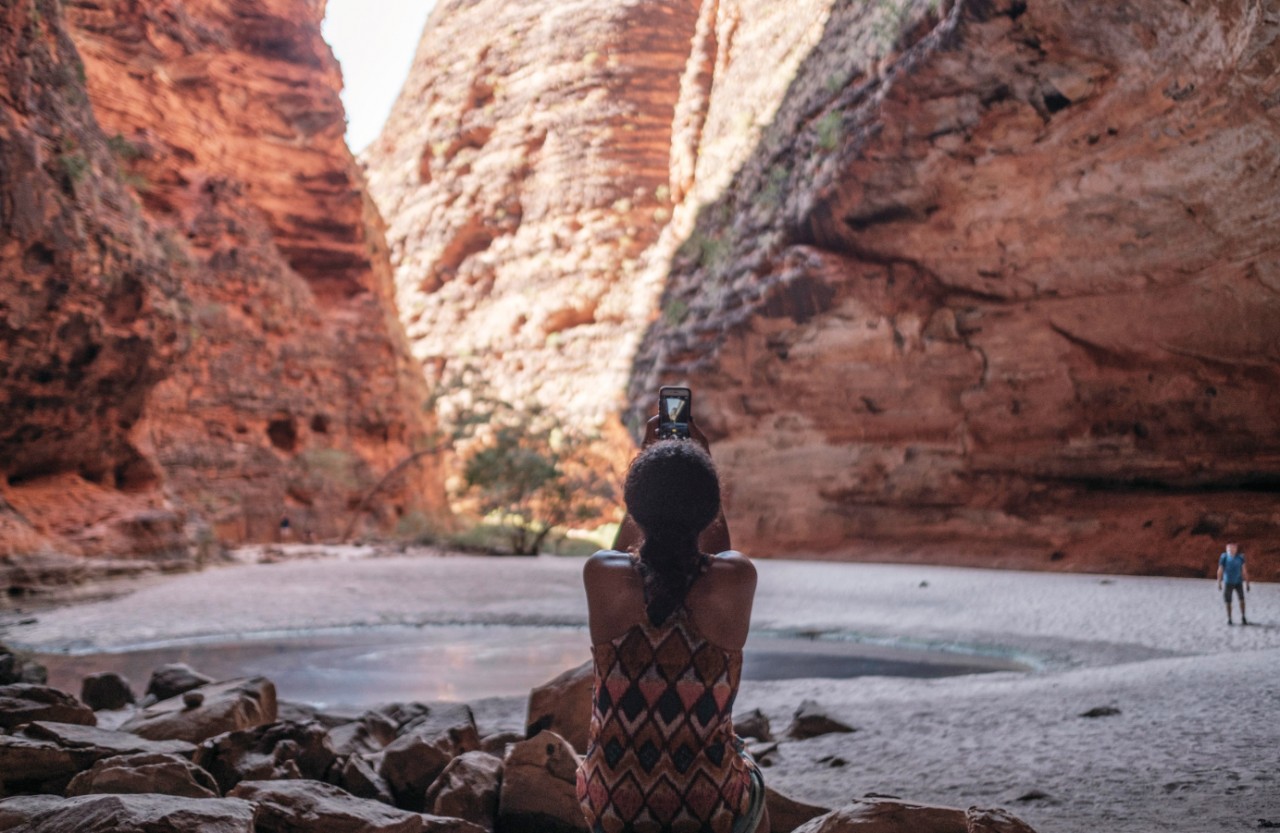 Cathedral Gorge is another highlight of Purnululu National Park. Locals call it a “natural amphitheatre” because this cave-like structure creates an echo effect when you speak. The pool of water in the middle is also shallow enough for you to wade in and have a splash to cool down after all that exploring. 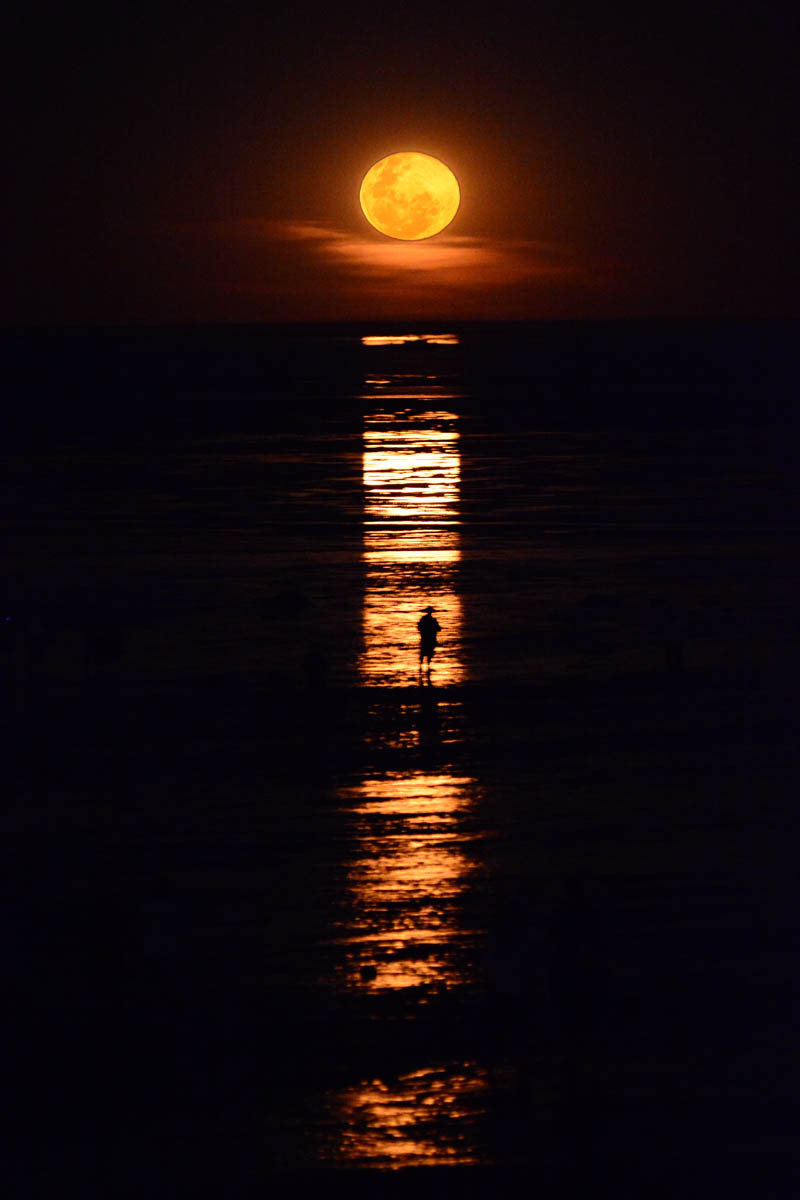 Take creative shots like these by standing at where the moonlight reaches the mudflats so you’ll look like you’re walking up the illusive “stairs”.
Image credit: JKSJ Travelling 2015

Roebuck Bay is home to one of the rarest natural phenomenons that only happens in a few places around the world – the Staircase to the Moon. This picture-worthy sight only occurs when the full moon rises over the mudflats at extremely low tide, creating the optical illusion of stairs leading up to the moon.

Note: Keep a lookout for Jetabout Holidays’ 3 Nights Experience Broome Tour, with which you’ll be able to enjoy the sunset camel ride – all with accommodation, flight tickets and itinerary settled. You can also witness this phenomenon during the tour on 30th-31st May and 1st June – so mark your calendars! 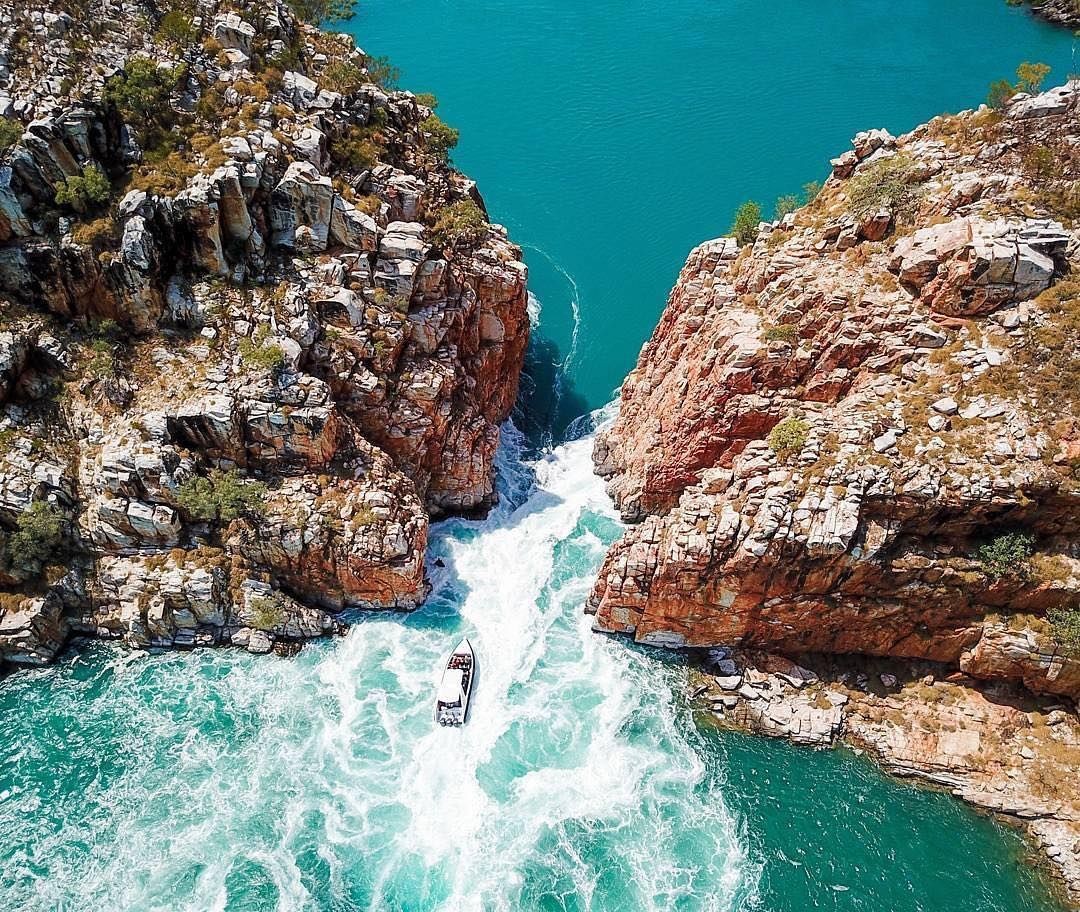 Behold…the only horizontal falls in the world. The name itself may spark up some confusion because, erm, how does water fall horizontally? To get all sciency about it, this phenomenon actually happens because a large amount of water is forced through two narrow cliff passages, creating a 4 metre difference in the sea level and this unique sideway waterfall effect.

Adrenaline junkies, you’ll be pleased to know that you can come face to face with the falls on a jet boat that’ll zoom you through the rushing waters, “hopping” on the surface – so get ready for a bumpy ride. These mysterious markings on the rocks were a form of communication for the early indigenous people last time
Image credit: ABC

You can even take a day trip to go island hopping around the 1000 islands in the archipelago. Visit Cyclone Cave, which was discovered to have ancient Aboriginal wall inscriptions similar to that of caveman drawings. This 40,000 year old cave is right behind Freshwater Cove fishing camp and is accessible by boat. Instead of being in the sweltering heat of a desert, opt for a sunset camel ride on the scenic Cable Beach in Broome. The 1 hour ride brings you along a picture perfect route – 22km of fine white sand against a backdrop of the Indian Ocean’s turquoise blue waters.

If you’re looking to siam the beach crowd, here’s where you’ll experience a peace and calm unlike most bustling Australian city beaches. Jurassic Park fans, you’re in for a treat – preserved in the reef rocks of Gantheaume Point are dinosaur footprints from 125 million years ago. You can even see prehistoric plant fossils etched into the rocks!

Note: The dinosaur footprints can only be seen during low tide, so do check the tide times at the visitor centre in Broome before heading to Gantheaume Point. 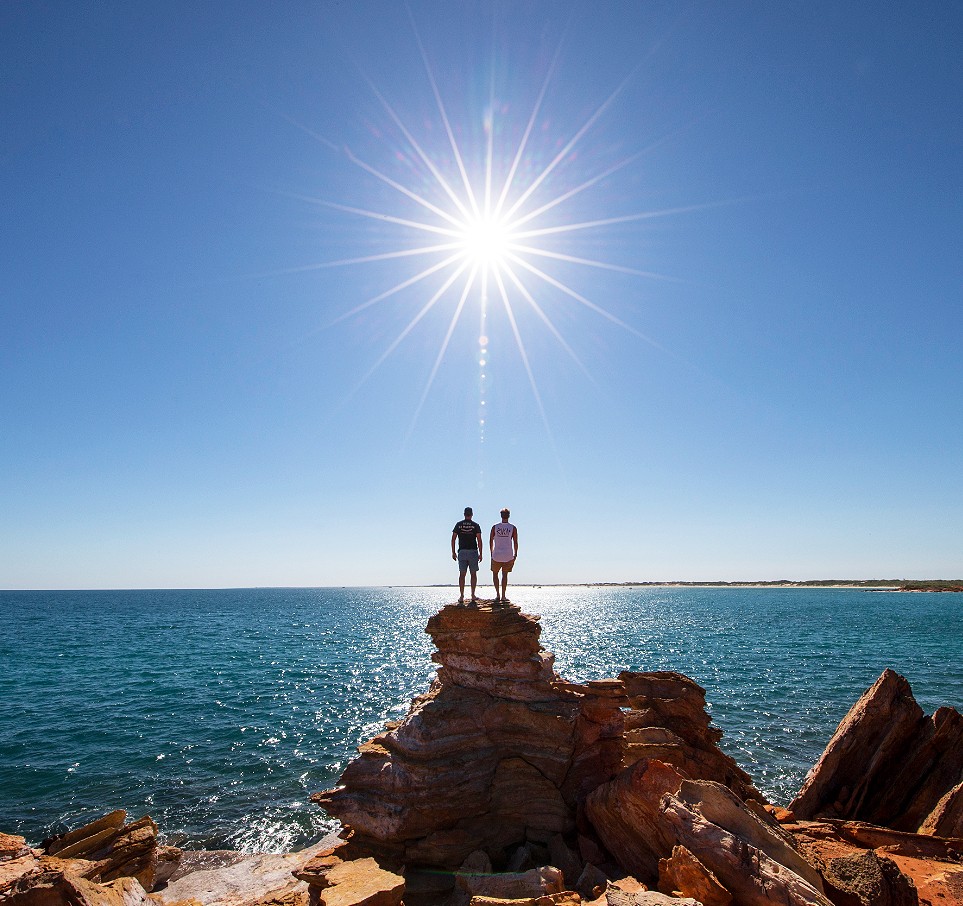 Just a five minute drive from Cable Beach or Broome’s Town Centre will bring you here. Don’t forget to snap a shot of this gorgeous landscape with rust-hued rocks and vibrant red cliffs overlooking the Indian Ocean. Head down to Willie Creek Pearl Farm to watch how pearl technicians harvest oysters and learn how to differentiate between real and fake pearls in one of their guided tours.

All tours will include a boat ride out to the ocean where you can cruise the waters of Willie Creek. Plus, morning or afternoon tea will be provided so you won’t go hungry while you’re out at sea during the visit.

Note: Go on the pearling farm tour with Jetabout’s 4-Nights Broome Tour and snag a AUD50 voucher you can use to shop for South Sea Cultured Pearls at the farm. It’s silently known amongst Singaporeans that a drive across the Causeway is nowhere near an ideal road trip. In Broome, you can embark on a 3 hour adventure on a four wheel drive to Cape Leveque. Save the tiring road jams and and traffic lights, this journey promises some stunning views as you cruise through white sandy beaches and vibrant red cliffs.

Since Cape Leveque is a popular for swimming, snorkeling and fishing, a trip down here is sure to fill up your itinerary for the day. 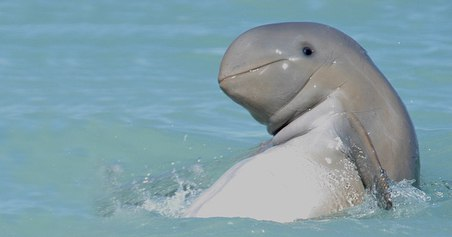 Catch these meme-worthy dolphins do clumsy backflips in the water!
Image credit: @Taegaeno

On top of that, you can then board a boat and get up close with Humpback whales and adorable Snubfin dolphins. Unlike normal dolphins, Snubfins have blunt, rounded heads instead of pointy ones, and their mouths are always perked up in a perpetual smile. One look at these towering cliffs is enough to make you feel small. The rock walls at Windjana Gorge are humongous and go up to as high as 90m. Keep an eye out though – you might be able to spot some freshwater crocodiles lurking beneath the waters! 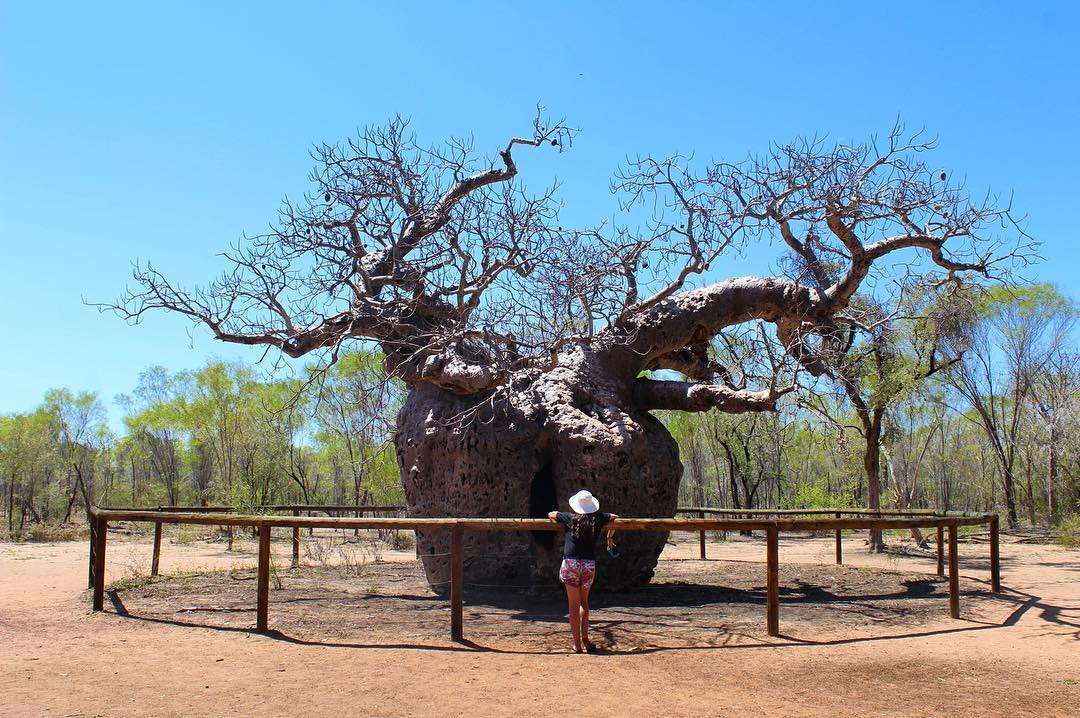 Not far off from Windjana Gorge is Myalls Bore, where the notorious Prison Boab Tree is at. It’s short and stubby trunk with a small opening makes it stand out amongst the other stick thin trees – probably why it was used as a prison for local Aboriginals in the past. Wade through the shallow waters of this 750m long tunnel.
Image credit: @outthereglobal

Head down to Tunnel Creek, where you’ll get to explore this 350 million years old tunnel. Thrill seekers, you may be excited to explore the secret caves within the tunnel and learn about how an Aboriginal freedom fighter previously used it as a hideout. Stick close to each other, as the tunnel can get very dark at some parts. If you’re done exploring all the nature that Broome has to offer, take a chill morning stroll at the Broome Courthouse Market, where there are tons of stalls with food, art and local produce. There’s even a stall selling freshly roasted coffee for a quick perk-me-up. Not to mention, the locally made handicrafts make for unique souvenirs to get for your friends back home.

10. Sun Pictures: watch a movie under the stars at the world’s oldest outdoor cinema 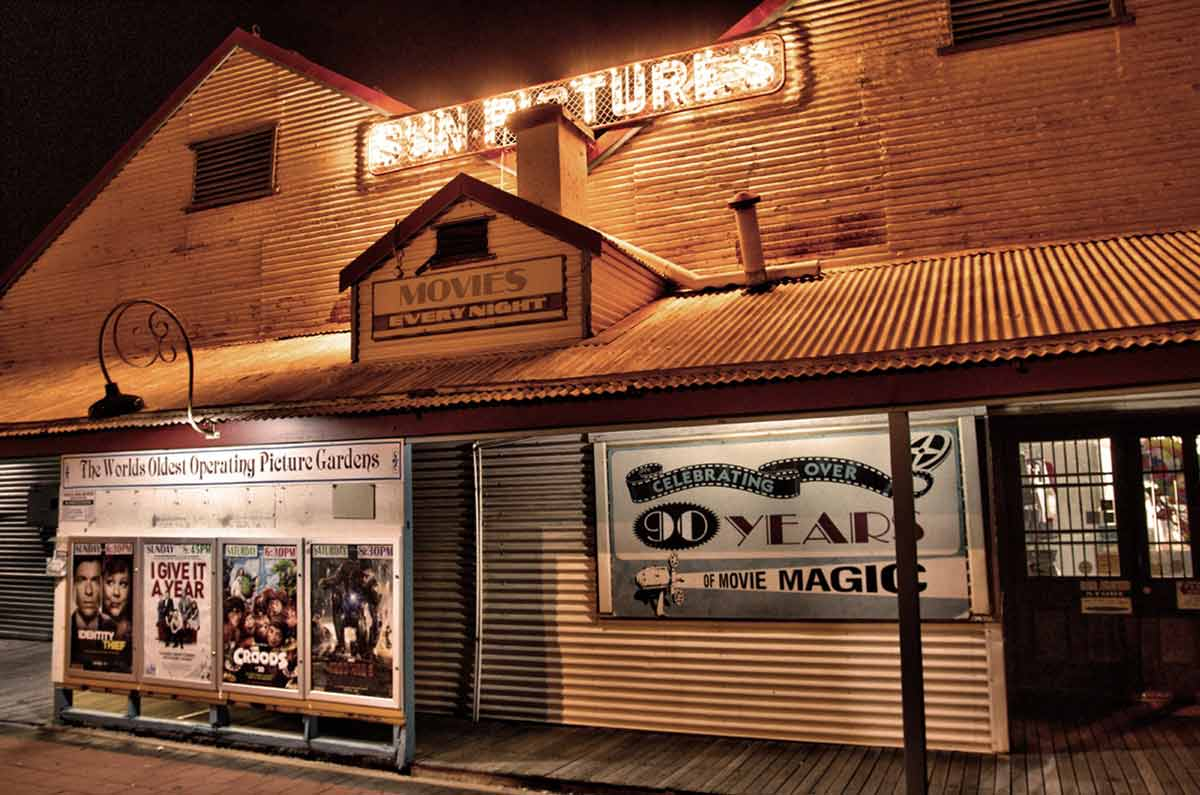 Unwind under the stars at the world’s oldest outdoor cinema, Sun Pictures. This Guinness World Record holder cinema has been open since 1913, and still screens movies nightly for 17AUD (S$17.58) per adult. 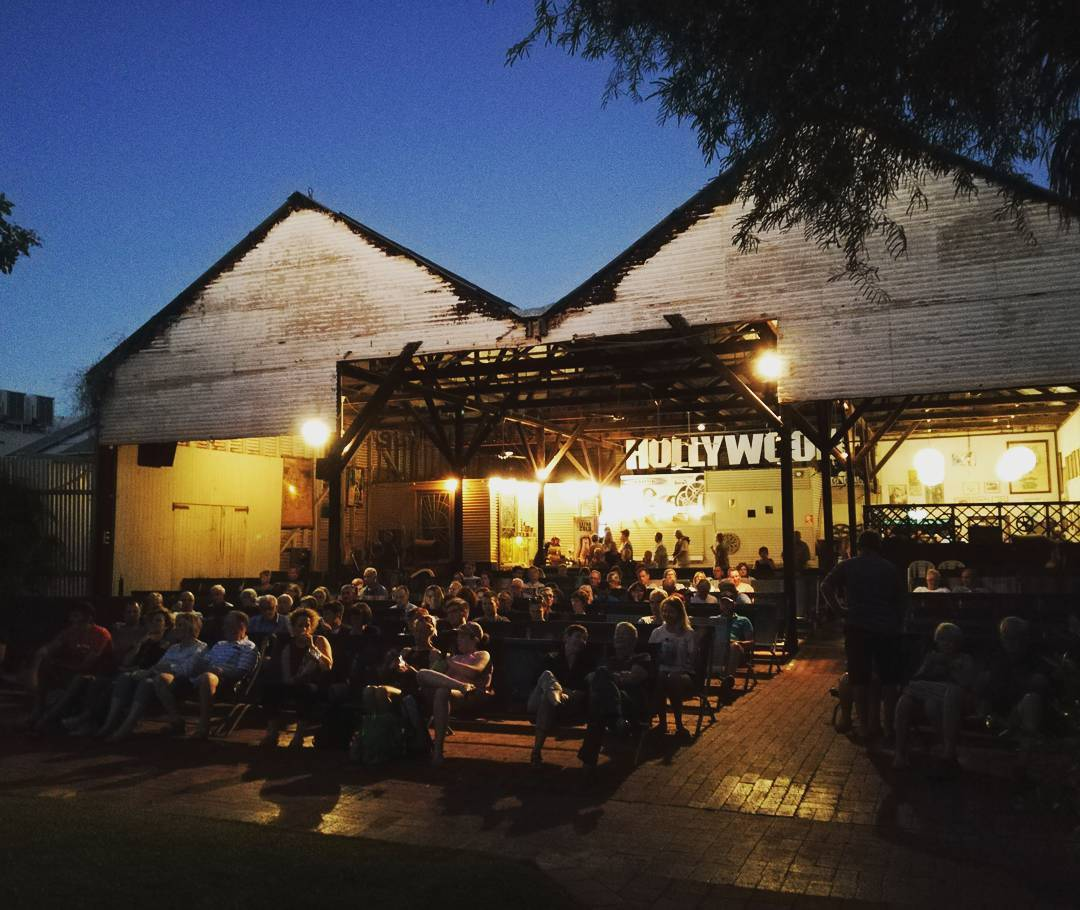 But hold up, just before you think they only screen old black-and-white films that match its facade, think again. Sun Pictures actually show popular current films like the Shape Of Water and Red Sparrow.

Plan your next adventure to Western Australia with Jetabout Holidays

If all these sights and activities in Broome have made you all ready to embark on your next adventure to the Outback, don’t scurry off just yet! Broome is still a rather unexplored tourist spot, and that’s where Jetabout Holidays’ tour packages come in.

These 3 tours include accommodation and return direct flights via SilkAir from Singapore to Broome. Plus, all day tours span from 4-5 days – perfect for a long weekend getaway!

The 3 comprehensive tour packages cover most of the attractions in Broome, so you won’t have to worry about navigating an unknown land or finding accomodation around the area. If you prefer to DIY your own itinerary, the 3 Nights Broome Free & Easy tour package lets you plan your travels without the hassle of arranging for flights and accommodation.

And, if you’re looking to bask in the Aussie goodness for a while more, consider signing up for these other Jetabout Holidays’ Western Australia packages, currently on offer: Broome alone has so much to offer, so what more the whole of Western Australia. Visiting this region is honestly a refreshing break from all the cityscapes and skyscrapers that we’re already so used to seeing here in Singapore. So if you’re craving for an adventure full of true-blue wanderlust, this is the way to go.

This post was brought to you by Jetabout Holidays & Tourism Western Australia.