Whether it’s gushing over Sae-byeok or taking part in dalgona candy challenges, we’re not ready to let go of the Squid Game hype just yet. While some in Singapore are doing their best to recreate Squid Game vibes, experiencing the actual locations from the series would be the ultimate goal for fans.

With VTL trips to South Korea finally possible, fans of the show can now swoon over real life set locations like Sang-woo’s mother’s fish shop and the convenience store where Gi-hun shared soju with Oh Il-nam. So, here’s a list of places you shouldn’t miss out on when you go to South Korea, plus accommodation options:

P.S. This article contains a couple of spoiler alerts, so read it at your own discretion. 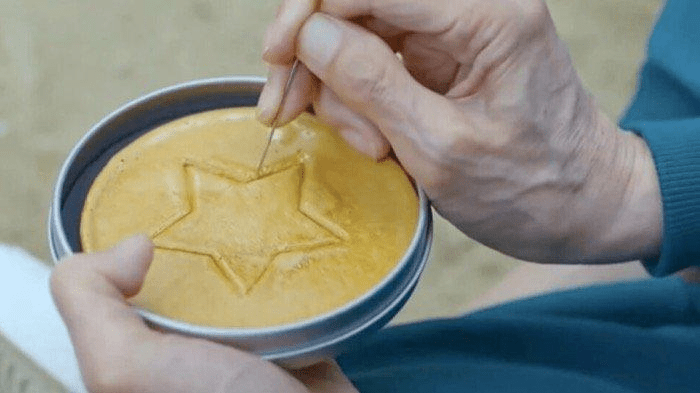 It seems that, just like the fans of the show, businesses and cafes are jumping on the dalgona candy trend. Flooding our Instagram, Facebook, and even TikTok feeds are countless videos of people trying the dalgona challenge or making their own at home. But there’s no better way to experience it than at an authentic dalgona stand in Seoul. 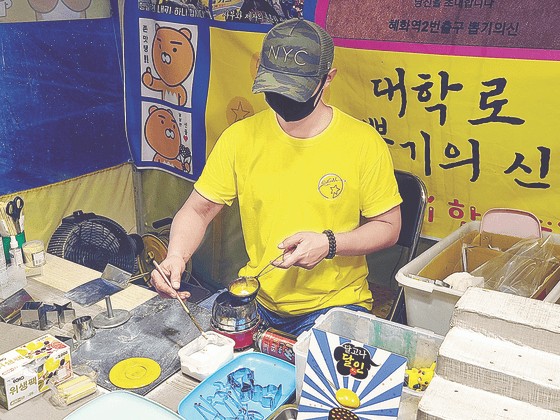 This traditional candy was hugely popular in the 1990s and could be most frequently found near schools. If you’re in Seoul, head down to the dalgona stand near Hyehwa station which is run by An Sae-hwan, whose stand made and distributed the actual candies that were used in the show. 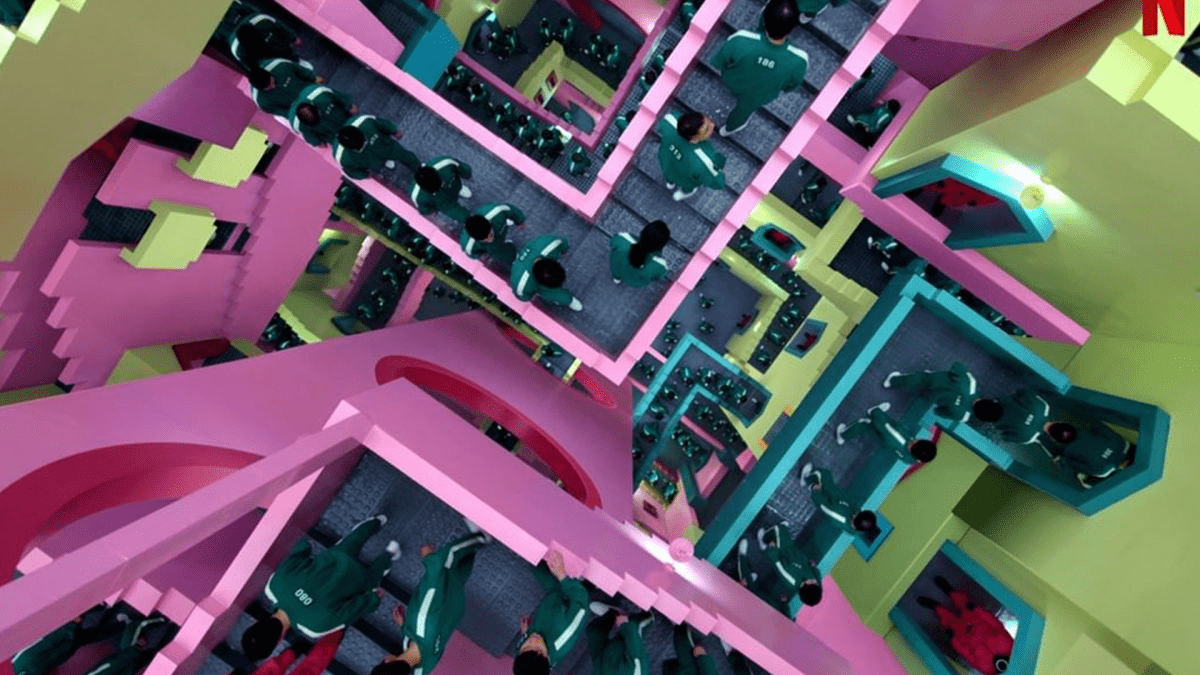 It’s undeniable that despite its dark and gory premise, Squid Game was an extremely aesthetically pleasing show to watch. What might come to mind is the iconic staircase scene, which, fun fact, was inspired by M.C.Escher’s Relativity. For fans of the art direction, you’ll be happy to know that Seoul is also home to a massive maze installation inspired by the show. 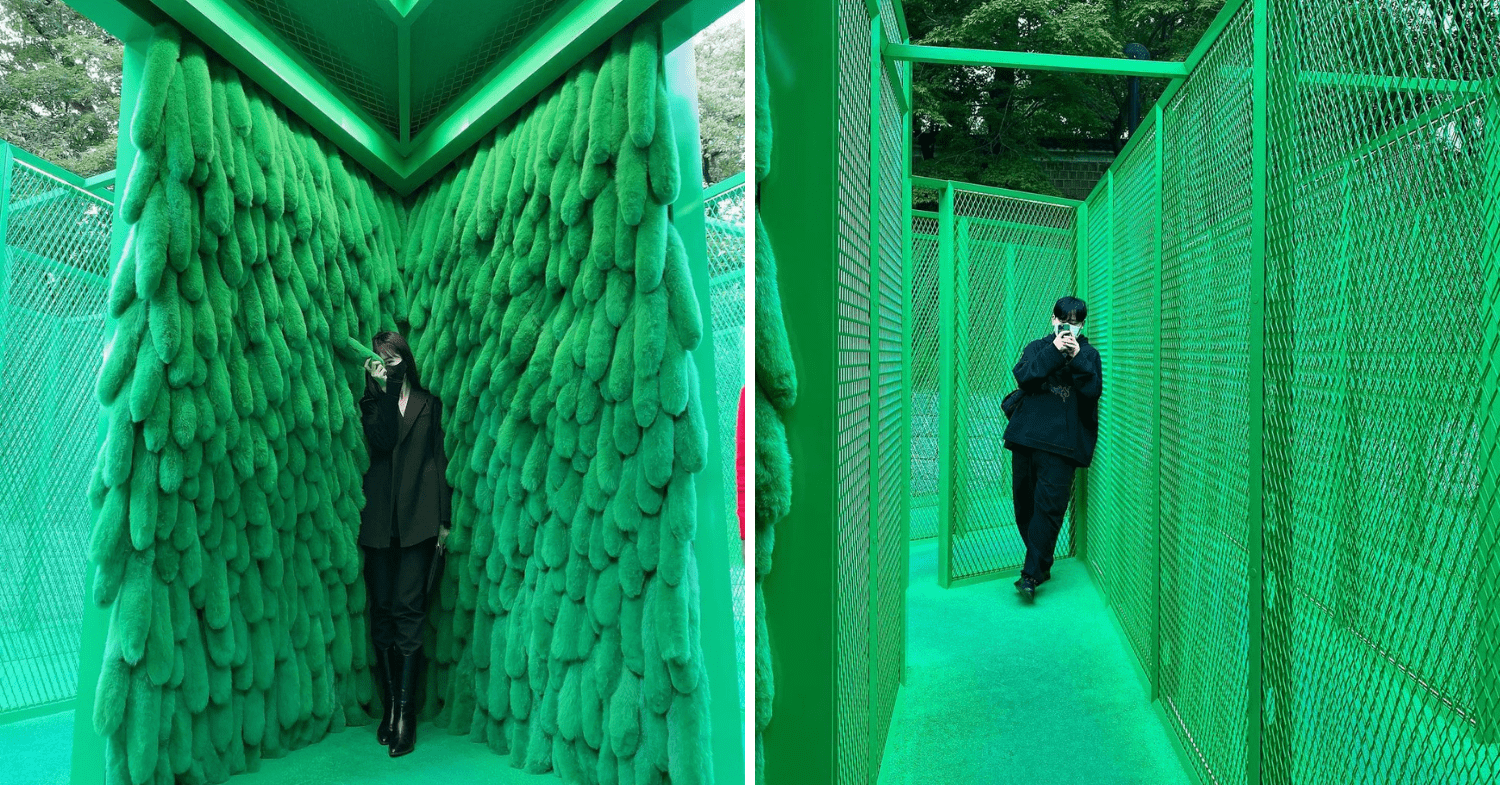 Conceived by Bottega Veneta, this massive triangle maze is located in Hannam-dong a neighbourhood. Sporting the characteristic green associated with the show, the installation is both intriguing to look at and slightly unsettling – Pretty much how we might have felt watching Squid Game.

Finding a hotel nearby isn’t too difficult if you want to drop by this installation while exploring Seoul. Some options include Ramada by Wyndham Seoul Dongdaemun which is just a couple of stops away and near happening marketplaces for you to spend the rest of the day at. You just might be able to sit on the very chairs Gi-hun and Oh Il-nam sat on
Image adapted from: KoreanDramaLand, Netflix

When in Korea, the one thing you can’t miss out on is convenience store food. While 7-Eleven and Cheers offer up some good bites, having ramyeon or banana milk in a Korean convenience store just hits differently.

For the Squid Game fans, you might want to head to CU convenience store in Ssangmun Uicheon neighbourhood to crack open a soju like Gi-hun and Oh Il-nam did. According to Korean news articles, even the locals are flocking to these areas to recreate the iconic scene. 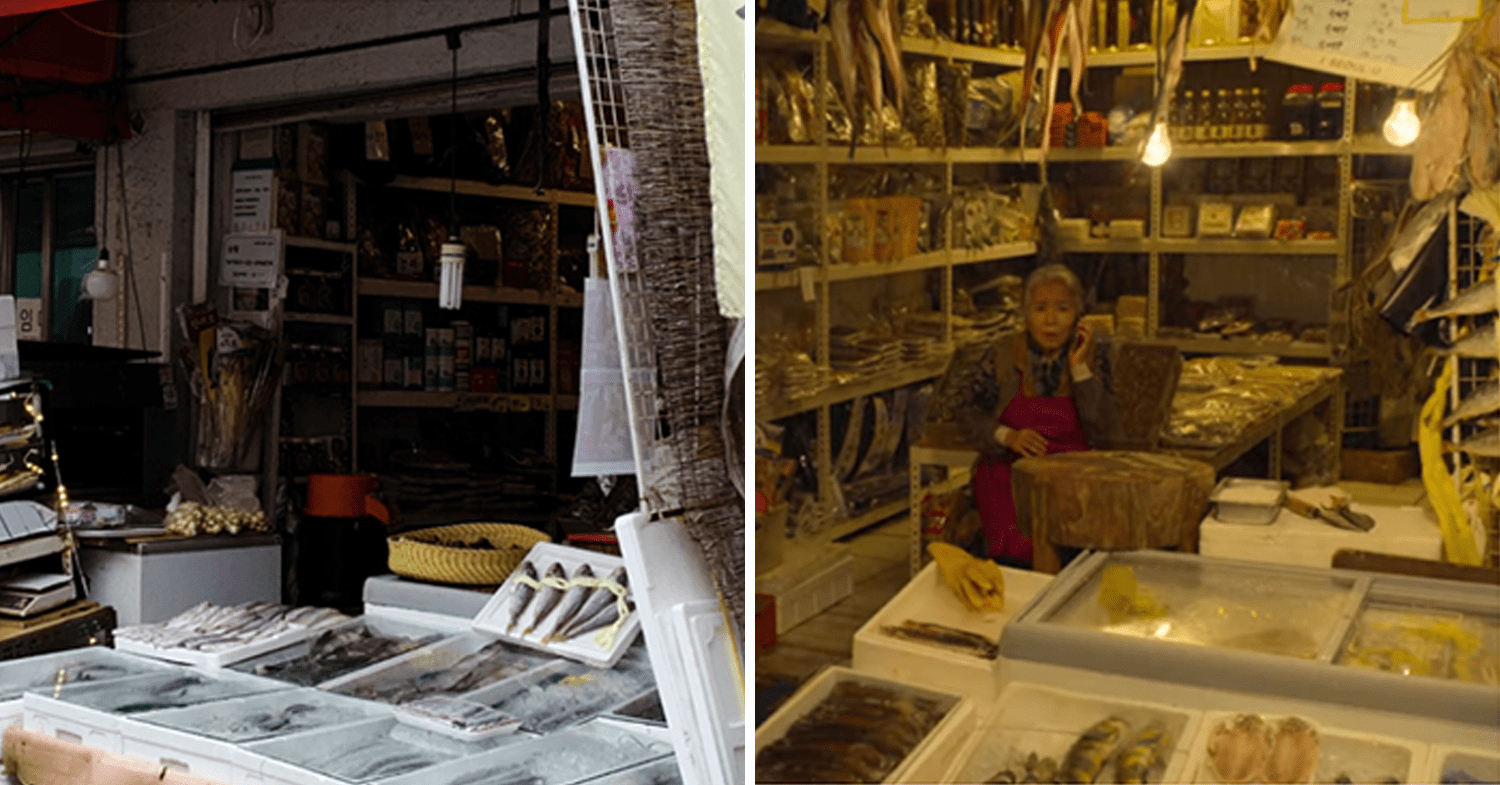 From just her few short scenes, we’d have to say that Sang-woo’s mother definitely stole our hearts. After all, it’s her complete faith in Sang-woo that is so heartwarming, especially as she brags about him to her customers. Though she may not be the one manning the store IRL, you can still check it out for yourself.

According to Korean news sites, her storefront was filmed in Baegun Market which is a great place to shop for fresh goods. Located in the Ssangmun-dong neighbourhood, the market is also near the CU convenience store where Gi-hun and Oh Il-nam shared a drink.

During one of the rare scenes outside of the deadly game’s island, we catch a glimpse of a theme park where our resident bad boy Deok Su meets his gang members. Apparently, this lively looking theme park is Wolmi Theme Park which is located near Incheon airport. 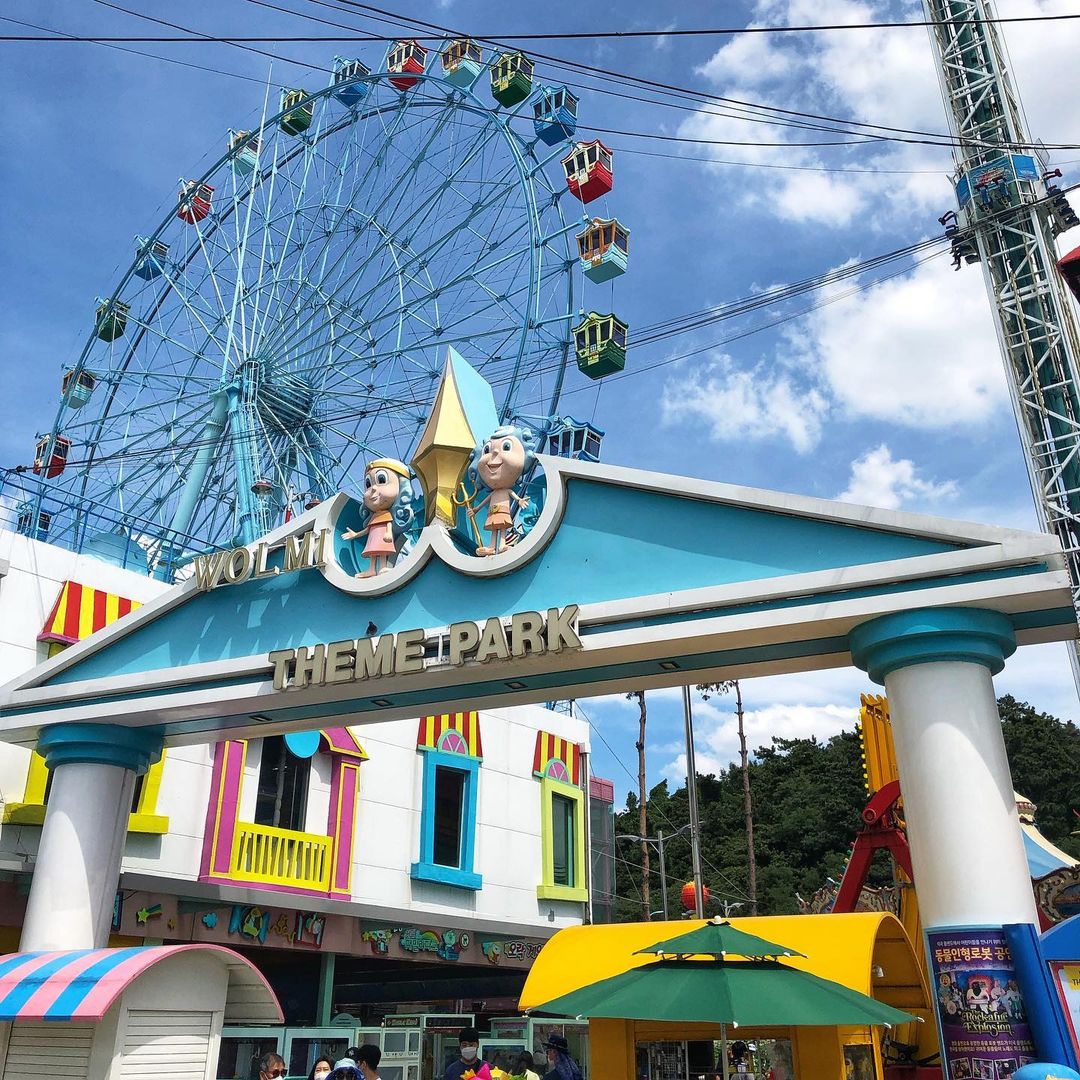 You can expect to see traditional theme park rides like a Viking ride, a ferris wheel, and a 70M high Hyper Shoot Drop. If you’re planning on visiting, there are lots of worthy places to stay near the airport like Howard Johnson by Wyndham Incheon Airport. It even has semi-resort vibes for a chill getaway.

In one of the most heartbreaking episodes of the show, we see Sae-byeok and Ji-yeong talk about going to Jeju island where Jiyeon will teach her new found comrade how to relax. While neither of them got the chance to do that, you can visit Jeju Island on their behalf and see the places that “look exotic and nothing like Korea”, the exact reason Sae-byeok wanted to visit. 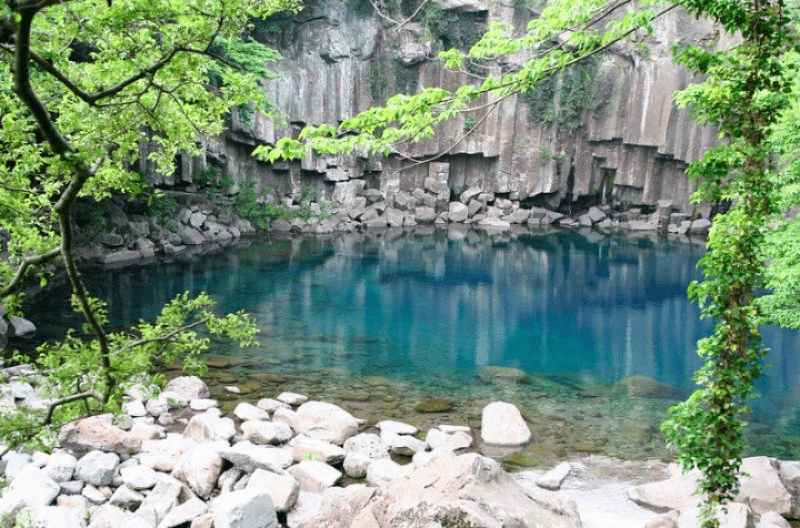 Jeju Island is famous for its nature sites and, since Squid Game, has even become popular with the locals. From Cheonjeyeon Waterfall to flower fields in Sangbansan, Jeju Island has postcard views that you wouldn’t be able to catch in the city. You can also head to Woljeongri beach and explore the cafes by the sea.

Considering how much is actually in Jeju, it would be a good idea to stay a few days to explore. Most hotels like Ramada Plaza by Wyndham Jeju Ocean Front are located near the coast so you can guarantee amazing views of the horizon too. 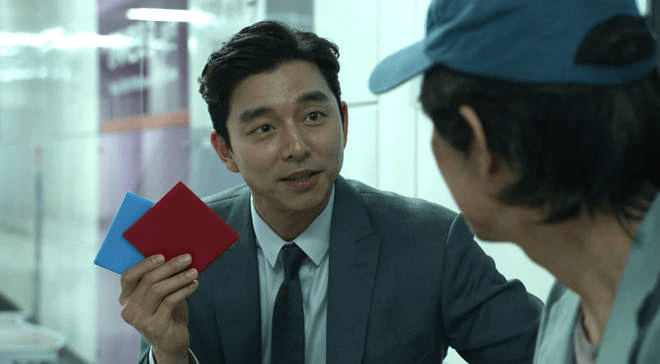 For those still simping for Gong Yoo’s few short appearances in Squid Game, you’ll be well aware of the Ddakji game that Gi-hun first played and got slapped for. Apparently, this scene was filmed in Yangjae’s Citizen’s Forest Station for those who want to recreate their own game of Ddakji.

The station is also within close proximity to attractions like Yangjae Flower Market Center and Yangjae Citizens’ Park for those who want to get in touch with nature while in the city.

One more thing to add to your itinerary would be Yeouido Park. Not only is it popular among the locals thanks to its beautiful scenery, it’s also the location where Gi-hun got picked up for the games. Other than recreating the shot of him waiting for the car, you can have a picnic while you’re here. 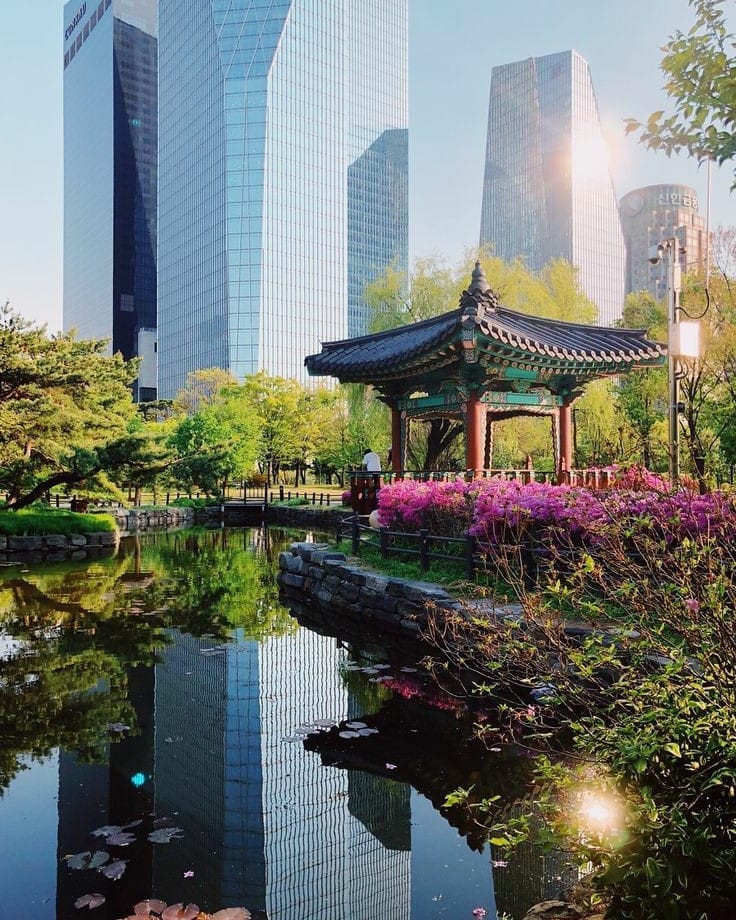 The park itself is a great place to catch the flowers that bloom during spring and there are places to sit and people-watch. If you plan to make Yeouido Park part of your daily itinerary, you can stay at Ramada by Wyndham Seoul Sindorim which is nearby.

Stay at hotels by Wyndham while exploring South Korea 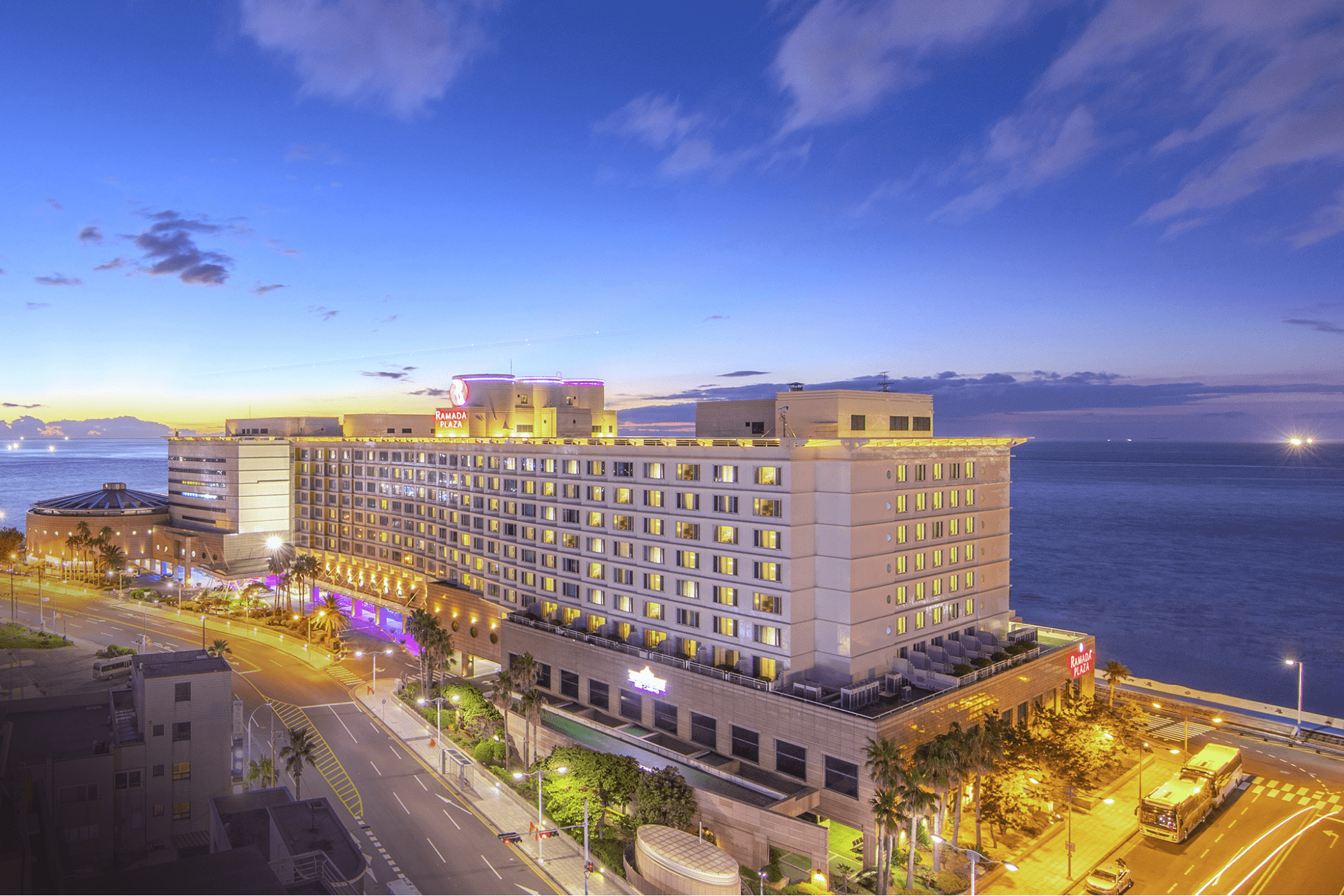 If South Korea is high up on your list for your upcoming VTL travels, save these Squid Game locations in Seoul and Jeju Island for a look-see. We’ve narrowed down a few accommodations options as well. With hotels located in popular spots around Seoul, Jeju, and Busan, Wyndham Hotels & Resorts will have you well-covered with comfy rooms and easy access to attractions. 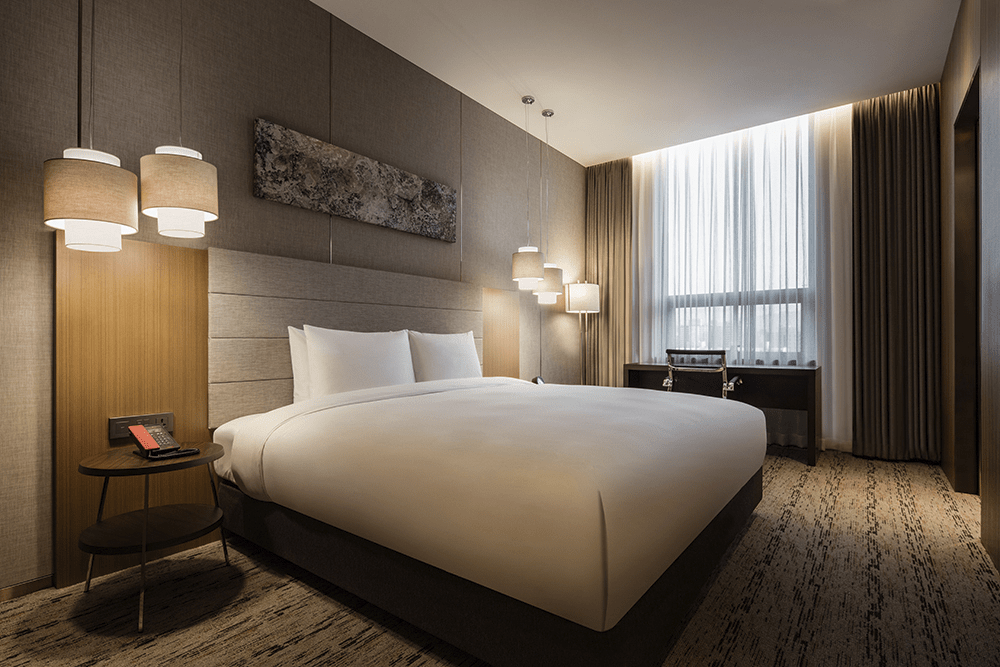 There are also options near Incheon Airport: Days Hotel & Suites by Wyndham and Howard Johnson by Wyndham if you’re on a shorter trip. Both hotels offer conveniences such as gyms, business centres and family rooms for a comfy stay. 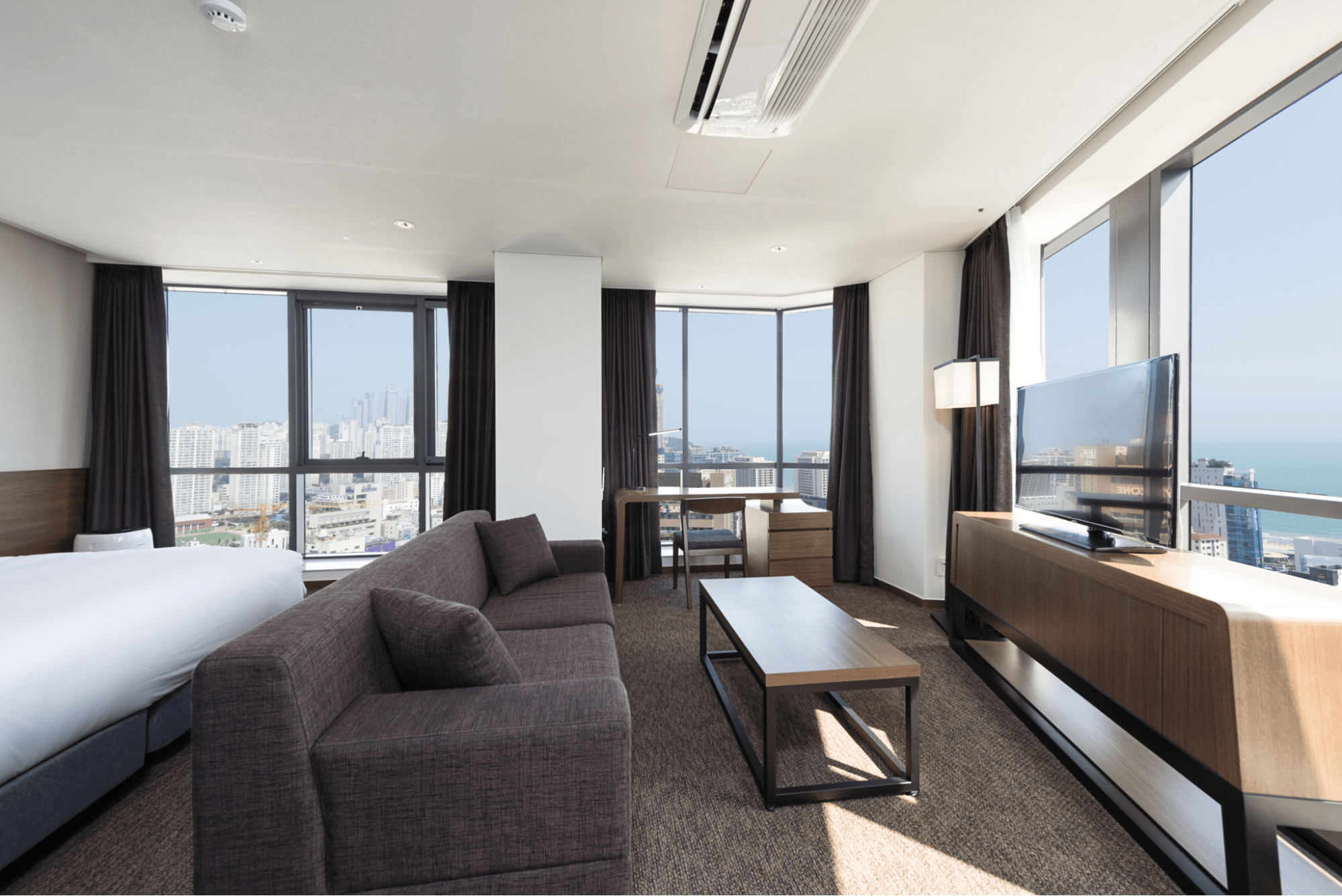 If you’ve been to both Seoul and Jeju already, head over to Busan for an equally cultured experience. Ramada Encore by Wyndham Busan Haeundae is located within walking distance from the popular Haeundae beach, and is surrounded by local shopping and foodie haunts as well.

Bonus: Get a free night’s stay at Wyndham Hotels & Resorts

By staying in one of their hotels during this holiday season, you can even score a free night’s stay as a Wyndham Rewards member.

From now till 18th January 2022, all you have to do is rack up 7,500 points which is equivalent to a 4-night booking – an easy feat if you’re going to explore different cities in South Korea. These nights don’t even need to be consecutive so you can go city-hopping and stay at different hotels by Wyndham during your trip.

You’ll then be able to use your free night’s stay at any of Wyndham’s 1,600 hotels across Asia Pacific.

With the right flights, accommodation and itinerary, your overseas vacation can be fulfilling. With Wyndham Hotel’s global health and safety protocols – from their frequent disinfecting and social distancing measures – you can also feel more at ease as you finally scratch your travel itch.

This post was brought to you by Wyndham Hotels & Resorts.
Cover image adapted from: KoreanDramaLand, Netflix 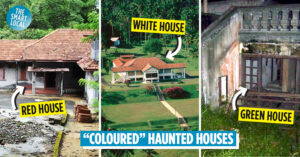