Cheap eats that are two good to be true 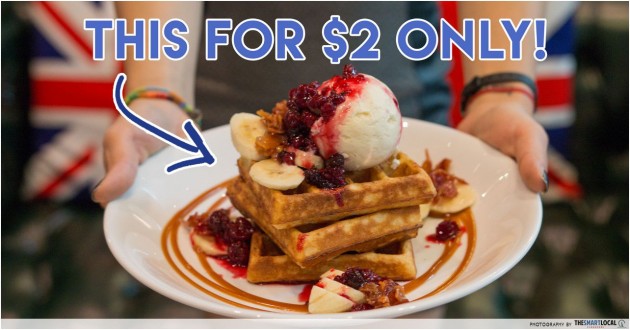 Home to almost every kind of cuisine on the cultural spectrum, my culinary cravings have never failed to be satisfied by Suntec City’s massive assortment of dining options.

Whether you’re a school student thriving on a tight pocket-money budget or just looking for an affordable way to settle dinner date plans in the CBD after work – save these dates because from 8th – 31st of July, a massive landslide of incredible deals are coming at you.

From a massive slab of BBQ ribs to a steaming plate of Sweet & Sour Pork from Crystal Jade, treat yourselves to signature dishes by your favourite restaurants at heavily discounted prices with Suntec City’s $2 Flash Deals and $2 Daily Deals. All you have to do is snag the deal of your choice off the Suntec City app or walk into any participating store in Suntec City for the $2 Daily deals. Stay tuned till the end and we’ll show you how easy it is!

Pump yourself up for one hell of a gastronomical stroll with these 9 bargain bites that you can snatch up this July for only $2.

Aside from dishing up some solid Western fare, patrons to this sprawling bistro have nothing but praises to sing of its cosmopolitan selection – a tasty tribute to our cultural diversity. And we only have one word for what Olivia & Co. has up their sleeves this July. WOW.

Now, you no longer have to choose between Waffles or Wings because these babies are both going for just $2 each! 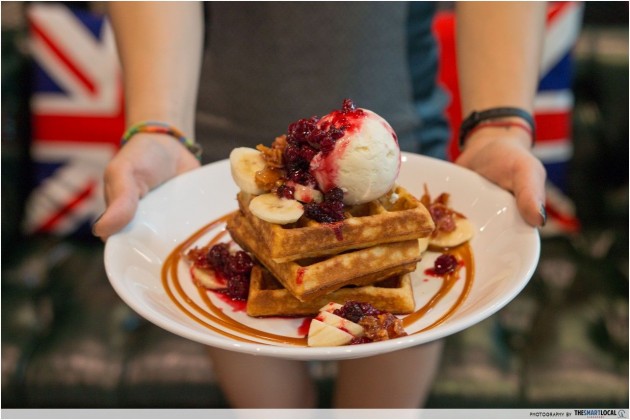 Wild Snorlax Waffles (u.p. $12) have appeared and you won’t need a Pokéflute here because your senses will be awakened by the mere sight and smell of this stack. 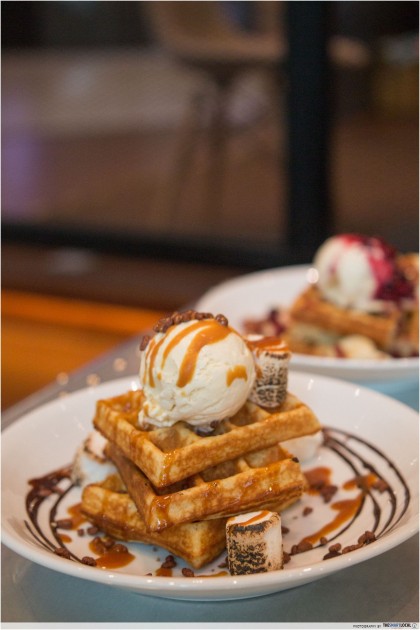 The Krispy Lux (u.p. $12) is everything you would want from a dessert on a plate. Toasted marshmallows, rice krispies, vanilla bean ice cream and a drizzle of rich caramel and chocolate sauce on a stack of waffles made for one brilliant dessert. 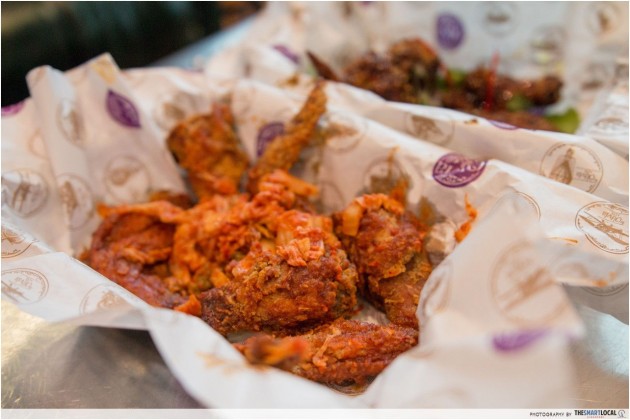 And if you’re not up for anything sweet…
With international flavours from home-made kimchi to sweet teriyaki marinade, Olivia & Co. dishes up delicious options for some pretty fine crispy wings – you’ll definitely get a kick out of these! 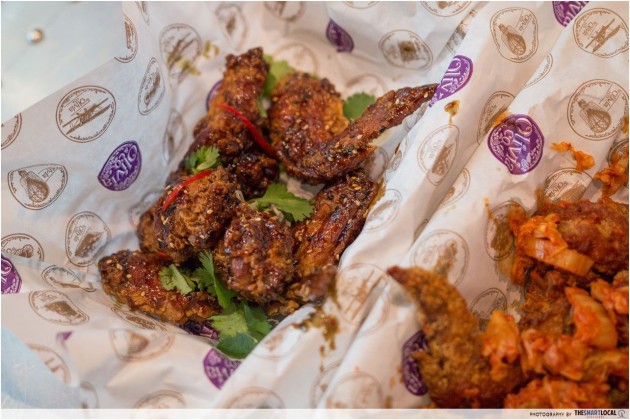 Olivia & Co. magically takes you around the world with their Vietnamese and Kimchi Wings

2. Half a slab of Hickory Barbecue Ribs at Morganfield’s 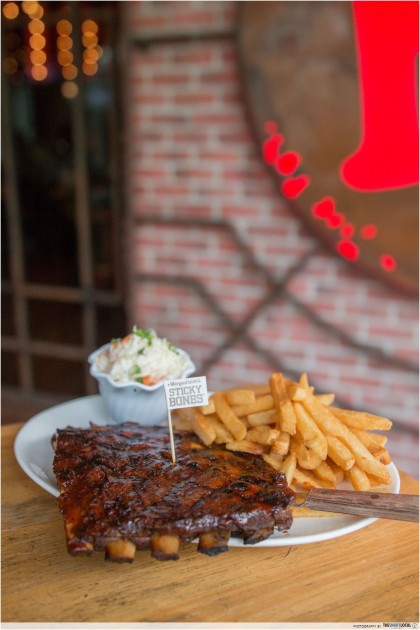 The sweet and tangy hickory barbeque basting might make for a sticky sauce to the touch, but these slow-cooked ribs slide right off the bone. And for $2 you get ribs, coleslaw and fries – what a deal! That would otherwise be the regular price you’d pay just to add on a single side at KFC.

Don’t feel pressured to use cutlery, we all know ribs taste better when you get a little handsy. Morganfield’s provides you bibs to devour this without the sauce getting on your favorite summertime outfits. 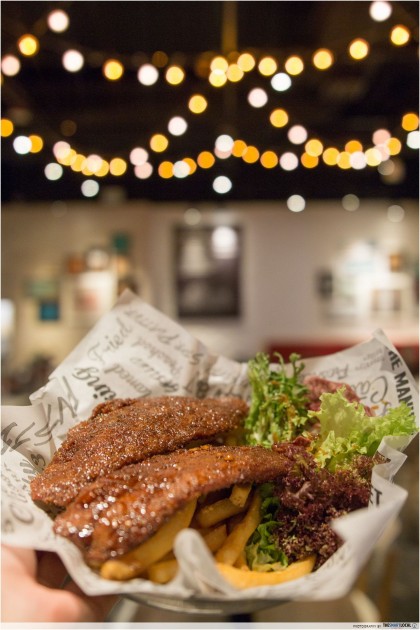 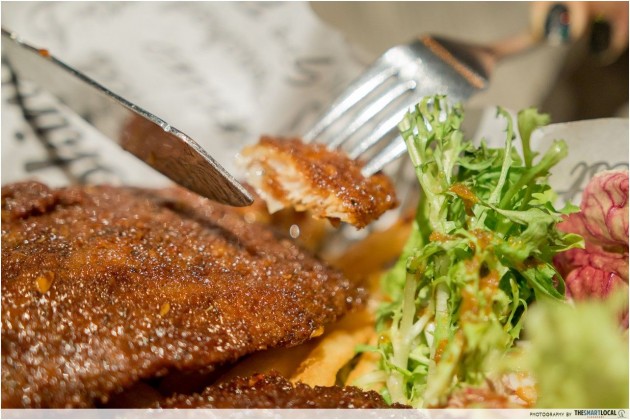 Look at how that Honey Soy dressing shines

This recent addition is part of The Manhattan FISH MARKET’s series of five fabulous sauces that is newly introduced. While you’re there, try the Salted Egg, Turkey Bacon, Creamy Mushroom or Garlic Ginger as well. They might not be going for $2, but they’re so good, you won’t be able to resist them! 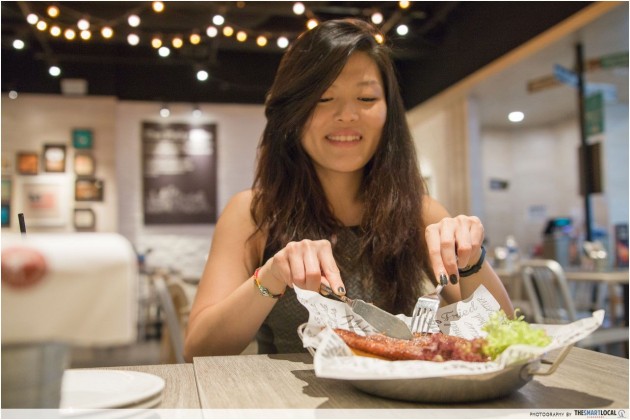 Putting the size of things into perspective, that’s how big those crispy John Dory fillets are

4. Tsukune Teriyaki with Poached Egg at Eat At Seven – ENBU 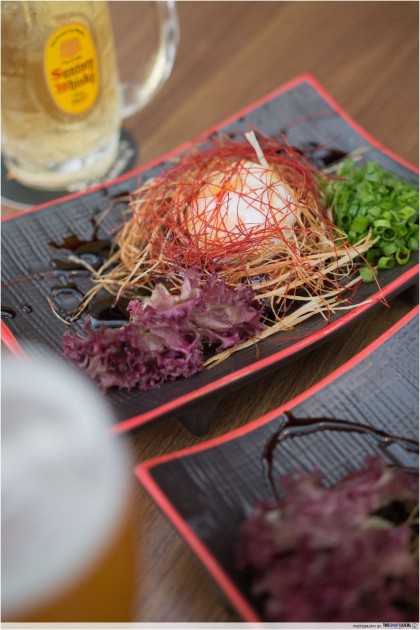 Located at level three of Suntec City’s newest Sky Garden, Eat At Seven is home to seven of Japan’s top food specialist concepts and restaurants. One of the concepts is Eat At Seven – ENBU, Singapore’s first-ever Warayaki and Charcoal Grill Izakaya, specialising in the art of Warayaki (grilling with straw and charcoal).

Meals at other classic Izakayas might break the bank, but ENBU’s Homemade Chicken Pattie TSUKUNE (Japanese chicken patty) + a perfectly poached egg is going for a mere $2! The deal is so unbelievable, we are having major trouble maintaining a calm outer composure. We can’t decide which is more exciting, its $2 price tag or the build-up to bursting that yolk! 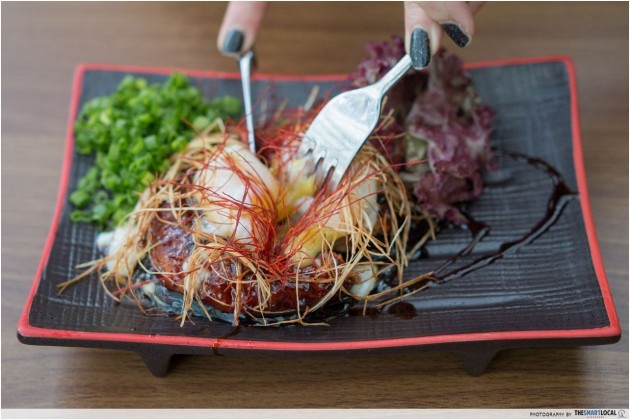 Almost too pretty to eat

It might not be substantial enough to constitute as a full meal, and you might find yourself ordering a bowl of rice – or two – from their menu; but for that price, we’re not complaining! 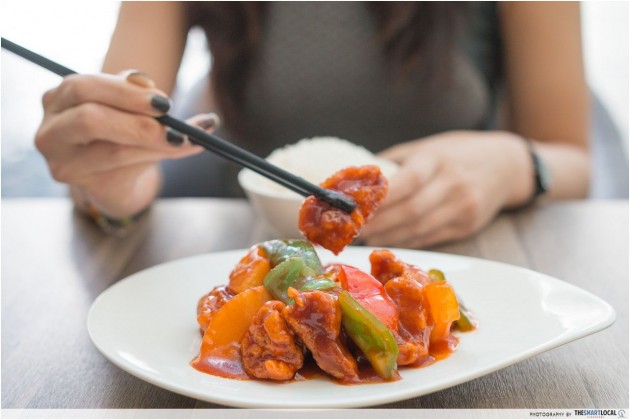 Crystal Jade will not be scrimping on their chunks of sweet and sour pork this July. Treat yourself to plates of steaming Sweet & Sour Pork (u.p. $14.80), because these deals are once in a lifetime – I’m telling you. 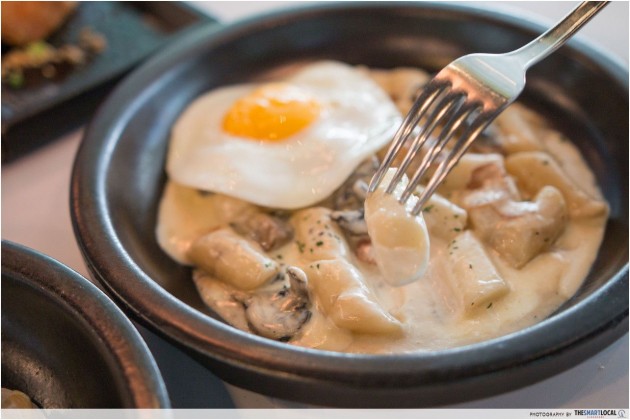 What do you call fake noodles? Impastas

This July, Guksu Restaurant’s noodle gurus have gone against all noodley conventions and have taken creative liberties in the reimagination of Italian pasta with their Carbonara and Vongole Tteokbokki (u.p. $9.90++).

If you’re big on the cream, you’ll be head over heels for this Carbonara Tteokbokki that has a rich consistency and is world’s apart from the regular fermented bean sauce. 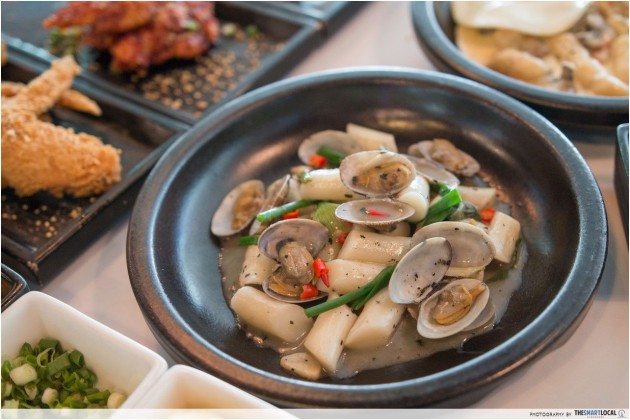 If you don’t stare hard enough, you can’t really tell, but upon closer inspection this “noodle” dish clams up because it’s secret is that it’s not made with penne pasta, but sliced korean rice cakes. Try the classic Vongole Tteokbokki, where spring onions and rice cakes are tossed in a light garlic sauce. And you’re getting all these fresh clams just for $2! 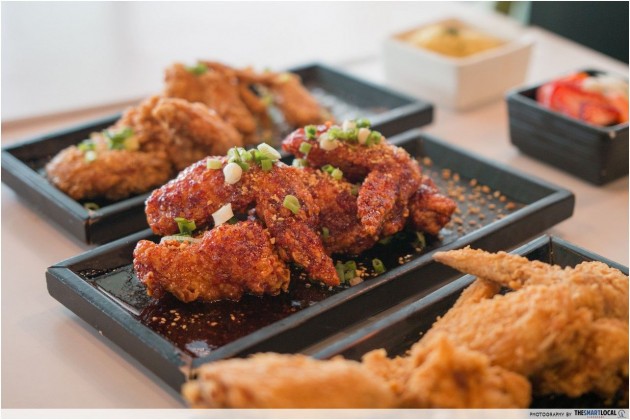 Mix and match their 3 different flavors – Classic, Spicy or Soy. Half a dozen of these usually go for $29.90 and with this daily deal, you’re getting this at less than half price. 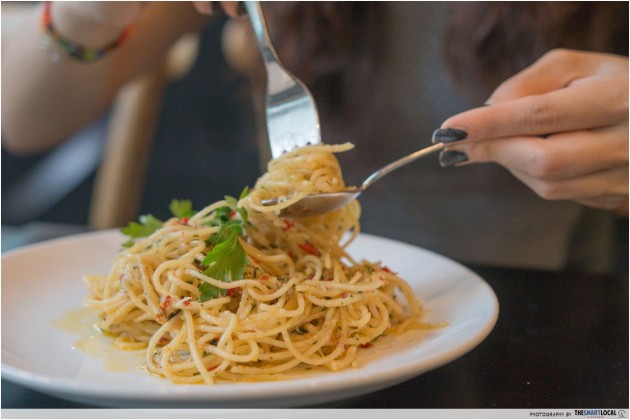 Intricate flavours from the fresh garlic, chilli and grated parmesan pack a whole lot of tasty into this simple spaghetti

You’re given the option to add fresh prawns for $5, but on this well-seasoned pasta, you won’t be needing any additional parmesan. We can’t imagine how we’re paying $3 less for this than our daily latte fix. 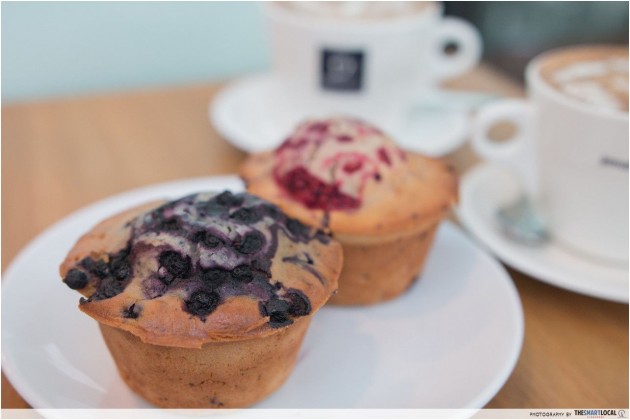 Jamaica Blue’s freshly baked assorted muffins are sure to bust the monday blues. Color up your mundane mondays with these fresh bakes for just $2 – the perfect pick-me-up for the post-lunch slumps. 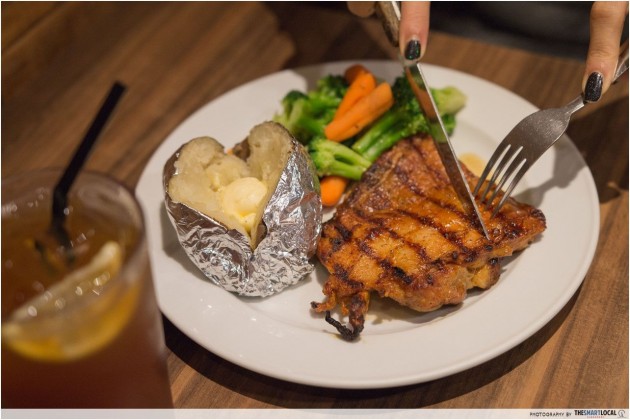 Making a fiery comeback with its encore appearance, this Fiery Chicken (u.p. $9.90) is one hot chick! For what you’d normally pay for a cup of Pepsi ($2), you’ll be getting one spicy chicken cutlet and two sides of your choice all served in their standard size. 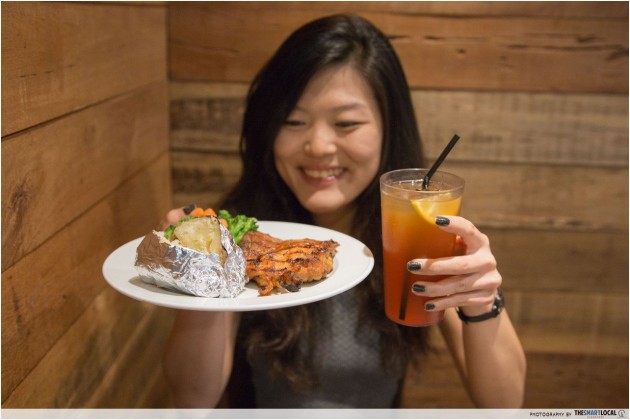 Astons knows that not all of us have tastebuds of steel, and for the brave souls who dare to take on the heat, you’ll get a cup of Ice Lemon Tea as part of the $2 deal! That’ll be your trusty remedy for the flaming sensations brought on by this innocent-looking piece of chicken. 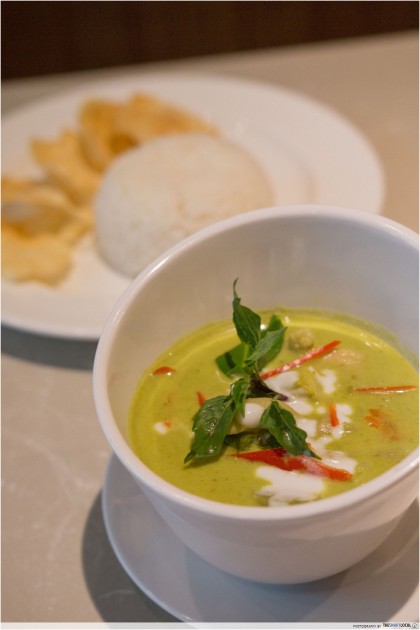 The ‘wan’ in the Thai version of the chicken green curry literally translates to sweet. Thai’s use it to describe the curry’s beautiful shade of green, and not so much the taste. But at $2, this savory bargain bite makes for a very sweet treat! 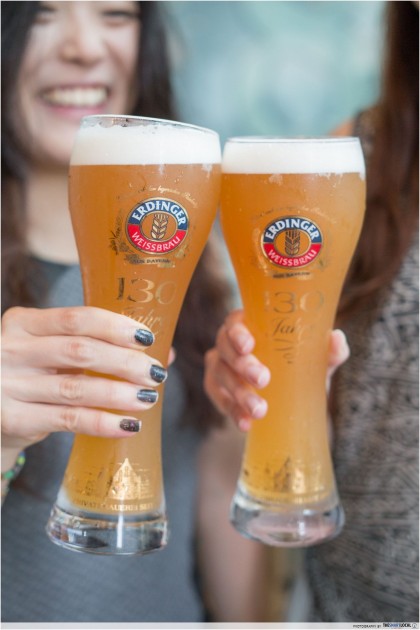 Morganfield’s, Jamaica Blue and ENBU are also giving beer lovers a chance to drink to their belly’s content.

Enjoy a cold glass of Kronenburg Lager/Blanc, Asahi, or Carlsberg ($13.90++ to $15.90++) served on tap and another one free! Make the most of your #Thirstday by pigging out on their bar bites like Bacon Covered Meatballs and Popcorn Pork! 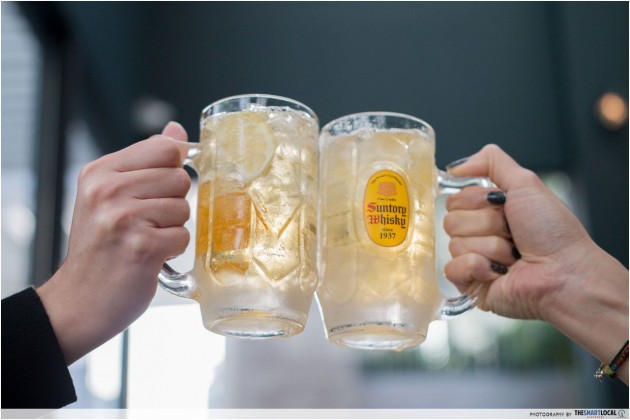 Kick back with ENBU’s 1-for-1 special on Japanese Premium Craft Beers, Coedo Shiro and Ruri Pilsner ($16), and their Suntory Whiskey Highballs ($10) – talk about a perfect end to your #Thirstday.

Getting these $2 bargain bites

From the 8th – 31st of July, food joints in Suntec City come together to offer exclusive daily food deals going at an all-time low of $2. All you have to do is download the Suntec City App to be eligible. Membership is absolutely free with no minimum spend necessary.

Just head over to the Apple or Google Play stores to get started! As a Suntec Rewards Member, you’ll be looped in on the latest happenings and be the first to know about new promotions Suntec City has to offer – watch out for their birthday specials! 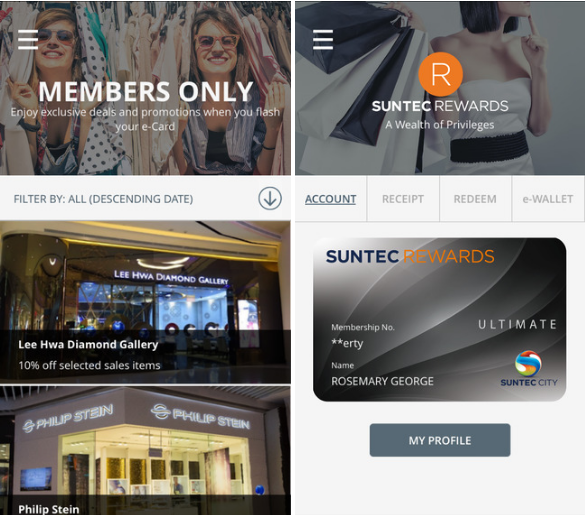 With these $2 Deals randomly released on a daily basis and the venues remain a mystery till the very day itself, so you’ve gotta be fast as the Flash to snag them.

All you’ve got to do is activate those fast-fingers and snag up the flash deals on the Suntec City App.They are but a small taste of the perks you’ll be entitled to as a member with many more unlockable privileges that come with higher membership tiers.

Note: Once you’ve grabbed a flash deal, it’s valid for as long as the in-app timer indicates.

Get the Suntec City App on the Apple and Google Play Stores today!

We’ve already rushed to sign up as members – what are you waiting for! Sign up as a member now!