Films like Doctor Strange have taught us to reimagine our universe as but one of many. While science at this point isn’t able to transport you to another world just yet, we can dream up such possibilities through art – some of which are mystifying and mind-bending. Freaky, even.

With the 2016 edition of Singapore Biennale officially open, the artworks are filled with surreal ideas that will offer you glimpses of different realities and perceptions of self. Here are 9 highlights of this year’s Biennale that will blow your mind! 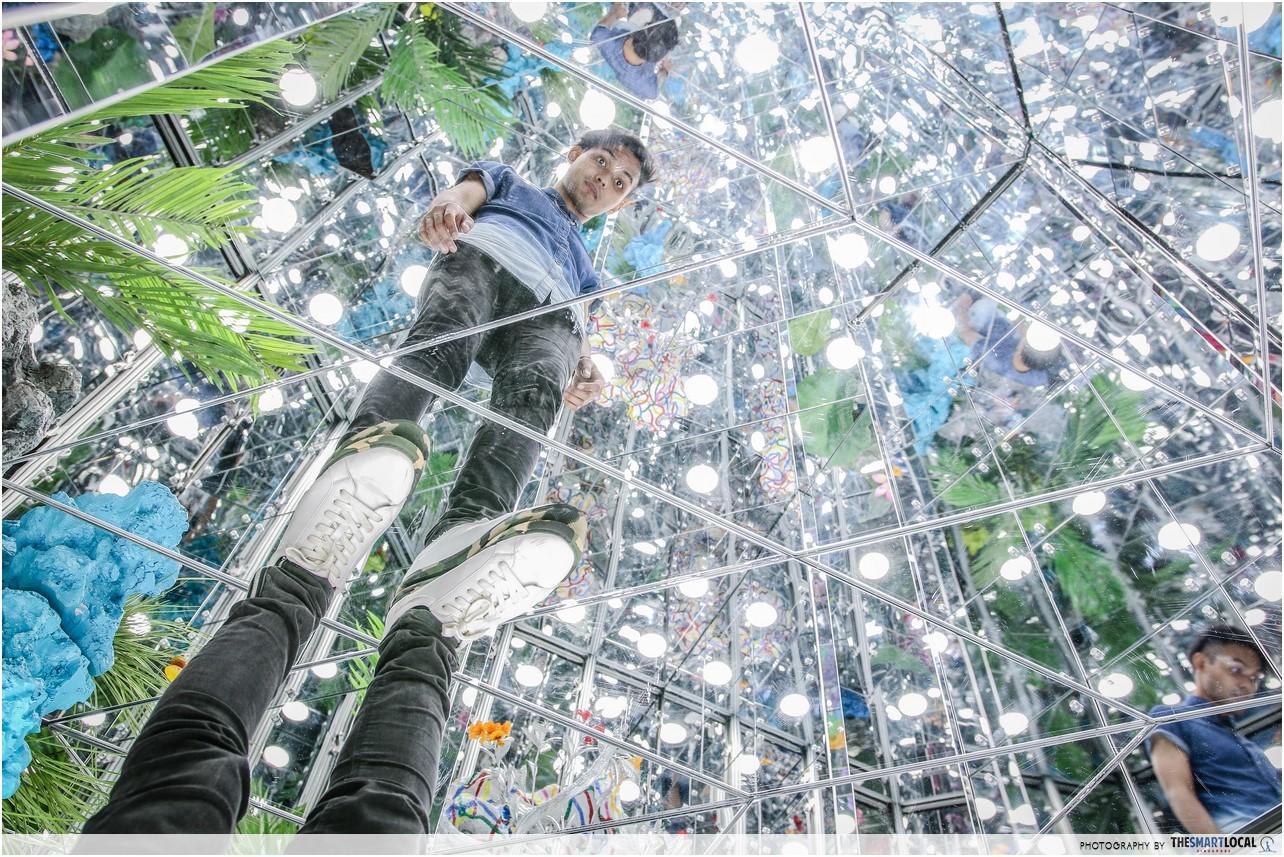 We’ll start with our favourite – Noah’s Garden II, by Chinese artist Deng Guoyuan. It’s a labyrinth of mirrors set within a glasshouse, with two sections in the middle occupied by large revolving reflective panels. With mirrors covering ceiling to floor, you’ll be reflected in every possible direction, as if you’ve entered an oversized kaleidoscope right in the middle of the Singapore Art Museum Chapel. 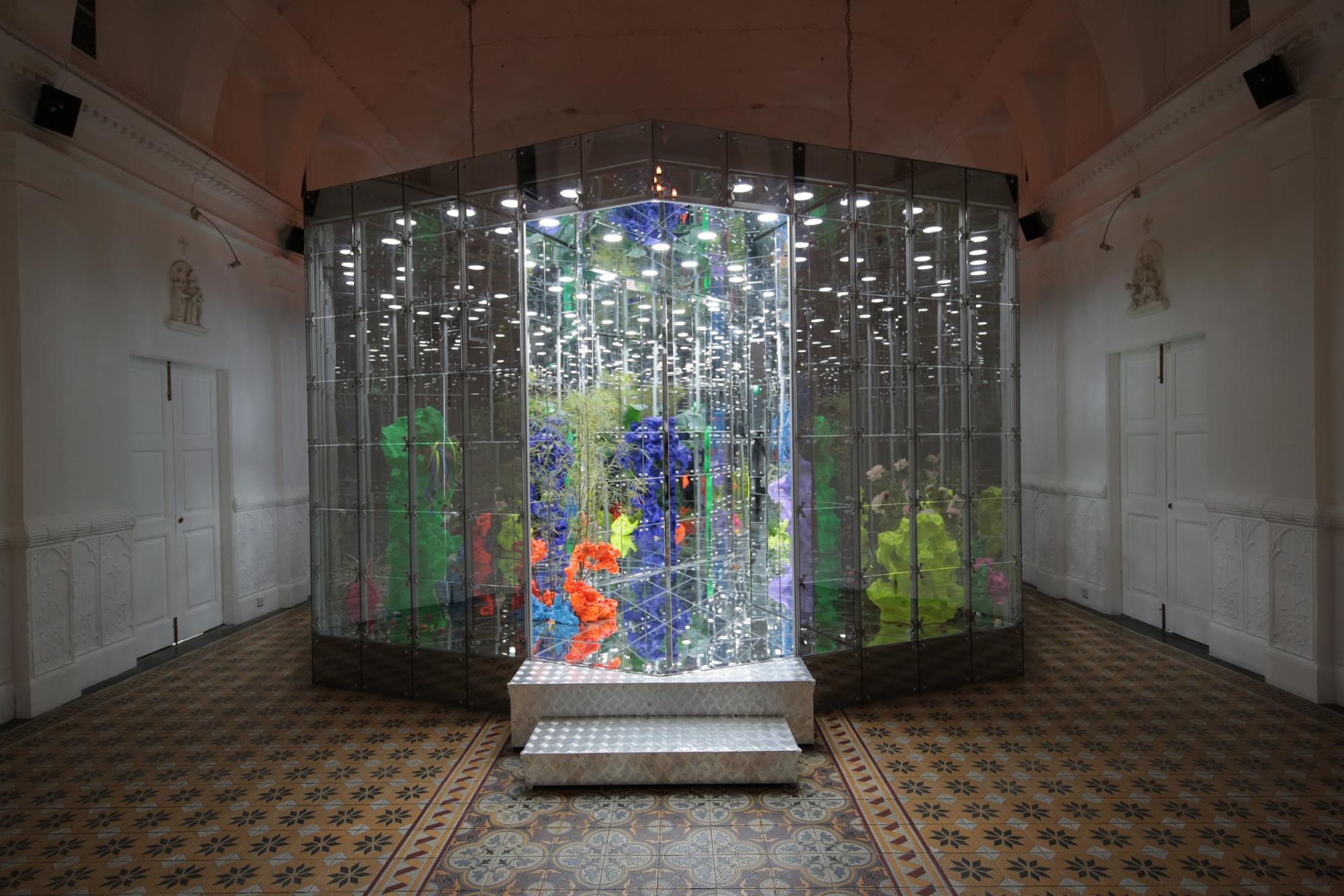 The work creates a utopia while simultaneously disassembling it – visitors begin to lose their sense of subjectivity as they make their way through the infinitely multiplying mirror images. Nestled in the corners of the installation’s interior are rocks and live and artificial flora, most of which have been painted over in neon hues. The stark white lights, endless reflections, and the objects’ unnatural colours – all these elements make for a prismatic installation that’s #outofthisworld. 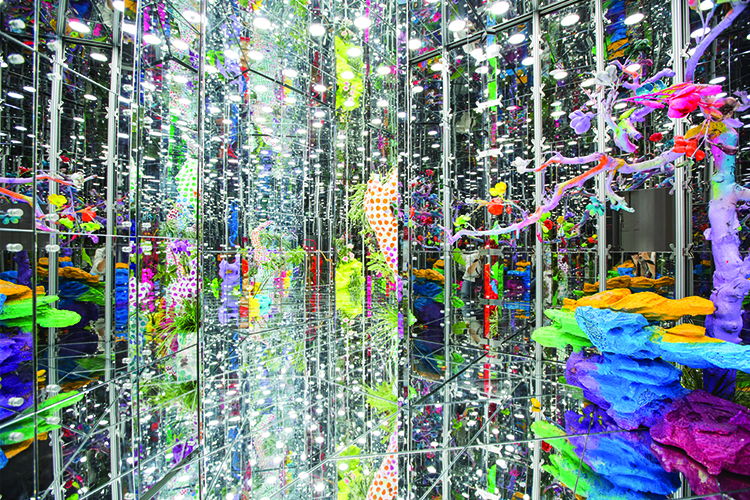 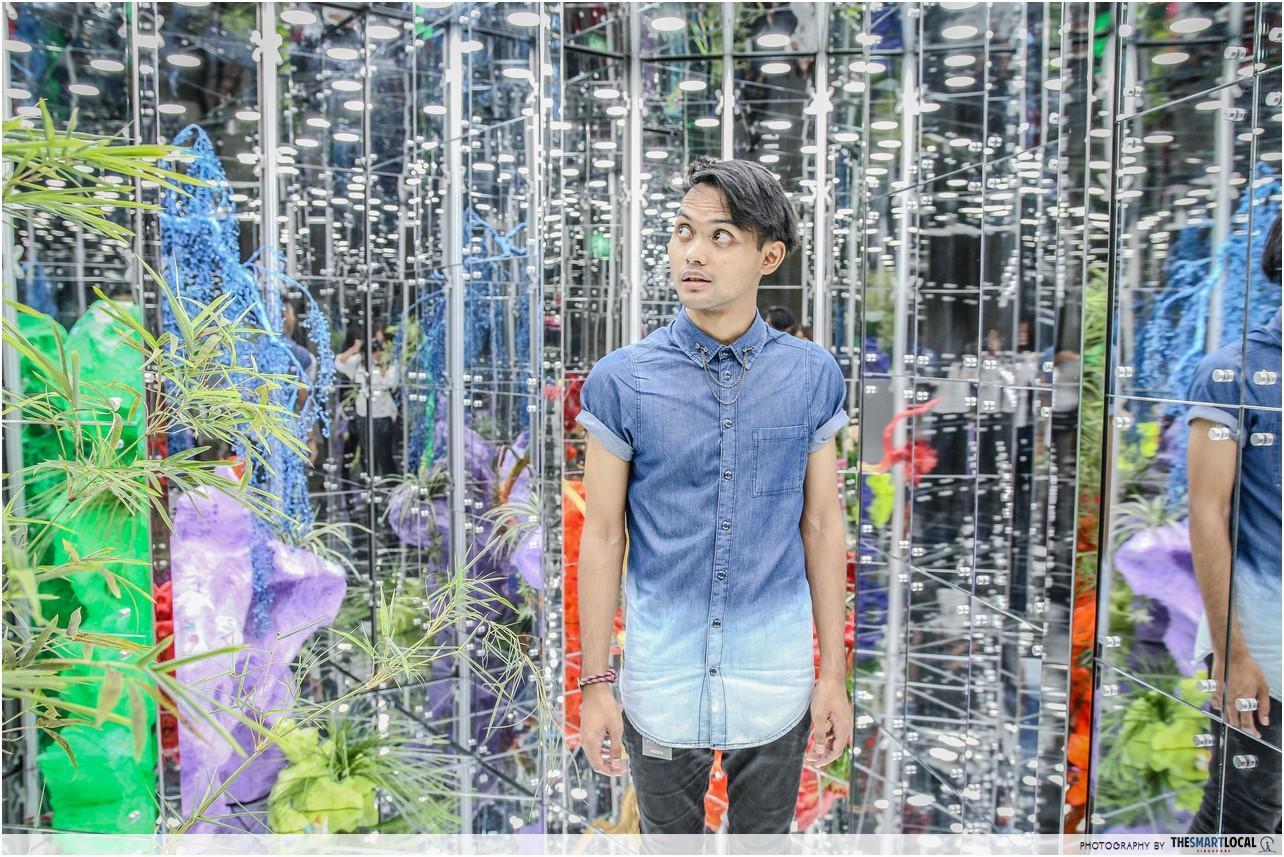 Where to find it: Singapore Art Museum’s Chapel on the second floor. Turn right after going up the main lobby’s spiral staircase.

2. The Land of Giants – “Inscription of the Island” by Lim Soo Ngee 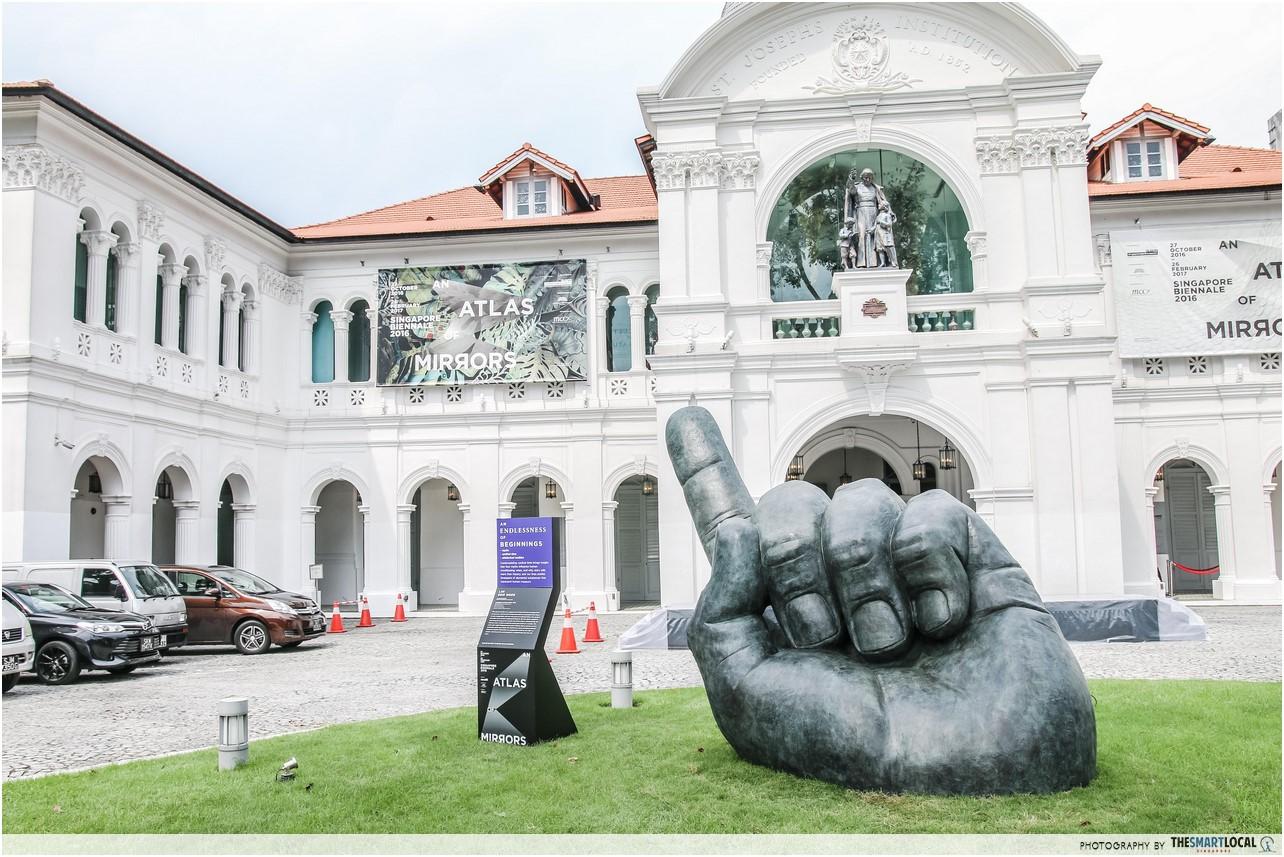 A colossal bronze hand has appeared at the entrance to the Singapore Art Museum, and no effort was spared to have this 1,500kg installation positioned as is (a crane was involved!). The hand seems to be pointing randomly to the sky, but from an angle, it appears to be pointing at the Singapore Biennale banner on the museum’s facade. This isn’t the artist’s purpose, of course, but it does look like an amusing, larger-than-life directional sign for the exhibition! 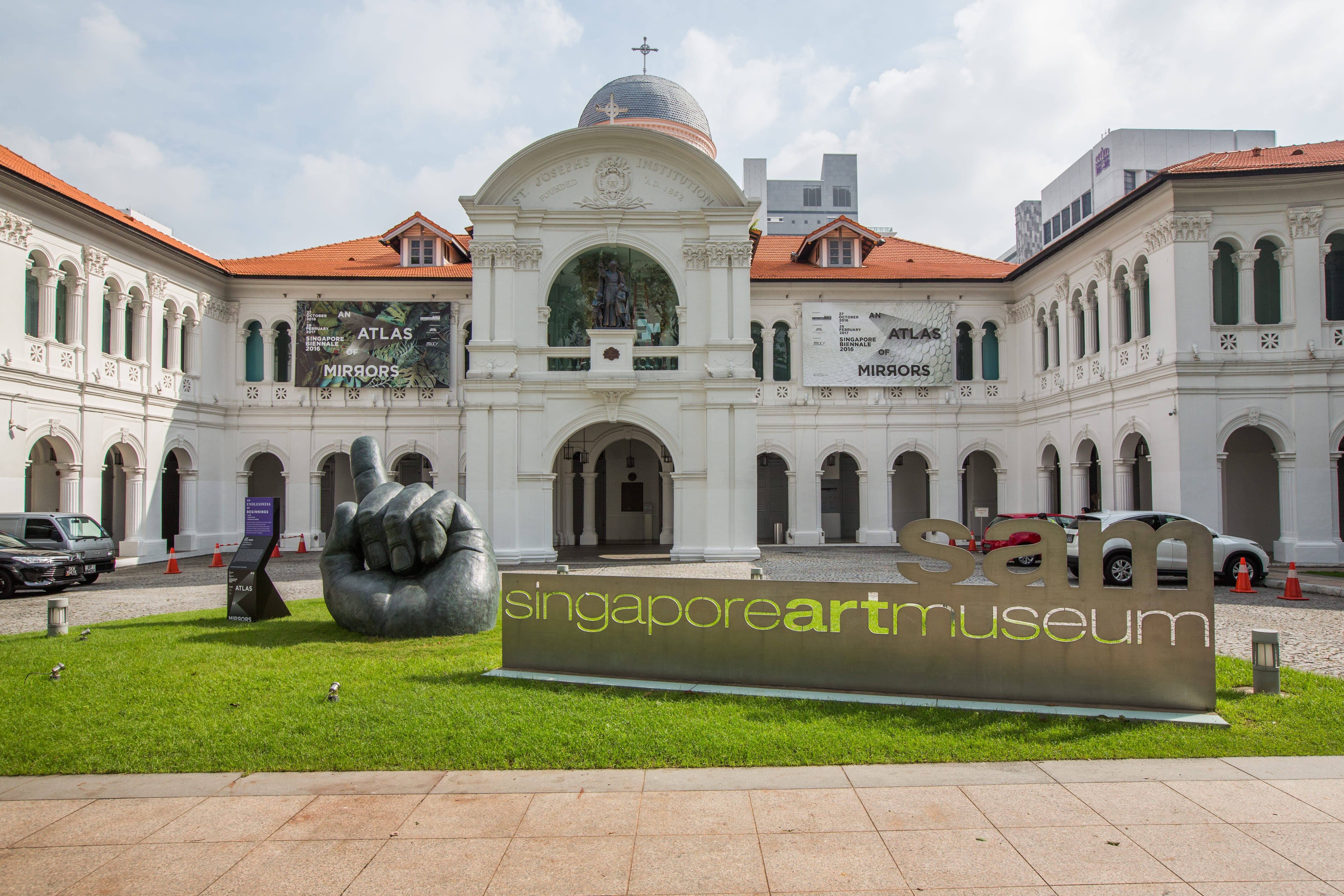 With his artwork, Singaporean artist Lim Soo Ngee imagines the hand sculpture to be a relic from the Bronze Age – the only part that remains of a collapsed statue that may possibly be embedded below ground, buried by cycles of wind and dust.

The idea for this work was drawn from a myth created by the artist himself, picturing a world that might have existed in Singapore, way before the arrival of Sang Nila Utama and Sir Stamford Raffles. In a civilisation that was skilled enough to mould bronze into large statues – think “The Pillars of Kings” in LOTR – such statues served as beacons for ships to return to the safety of their land. Eventually, time and nature caused the collapse of these colossal sculptures, and what you see now is all that remains. 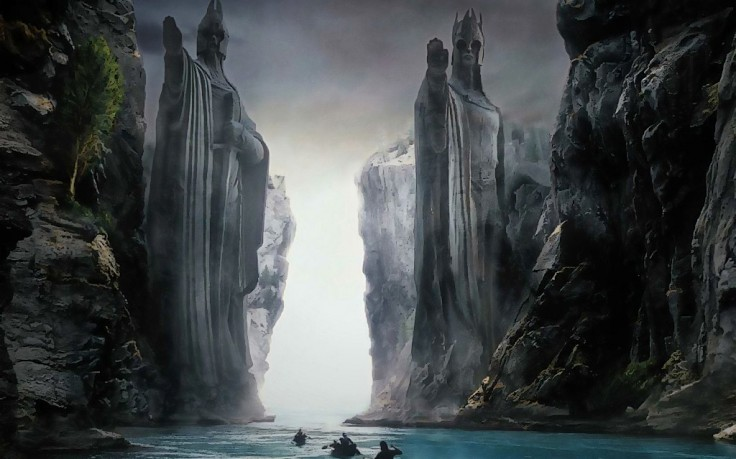 Where to find it: On the lawn outside the Singapore Art Museum. 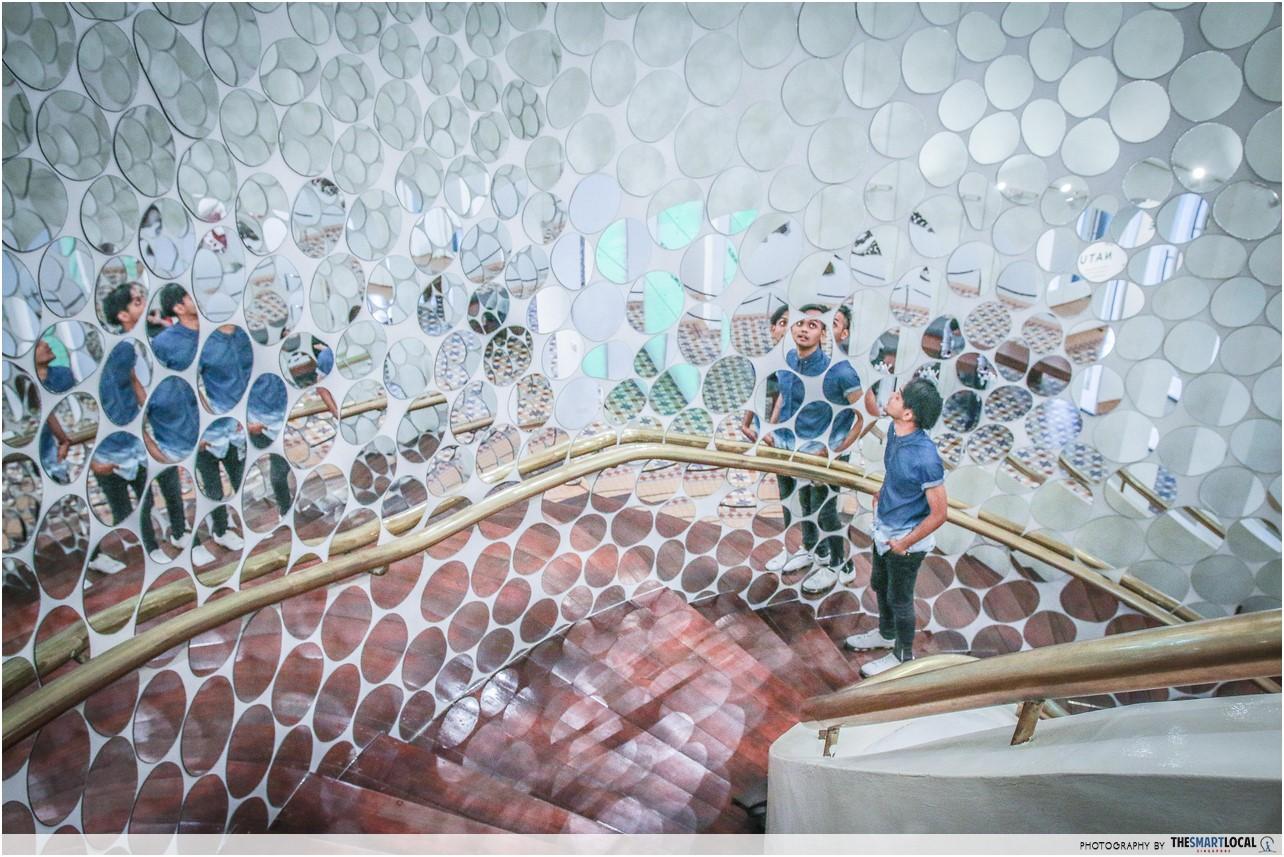 Another kaleidoscopic artistry has taken over the spiral stairwell at the Singapore Art Museum, as the entire curved wall is covered by more than 1,600 circular mirrors. The optical illusion here is stunning, with every panel creating its own fractured image of the staircase and all who pass by.

Take a closer look at the edges of the mirrors and you’ll find tiny cracks, evidence of the effort Japanese artist Harumi Yukutate spent (hand!) cutting each and every single one. The artist has also covered different structures around the world with mirrors, and just like those works, Paracosmos appears to dissolve into its surroundings as it reflects it. 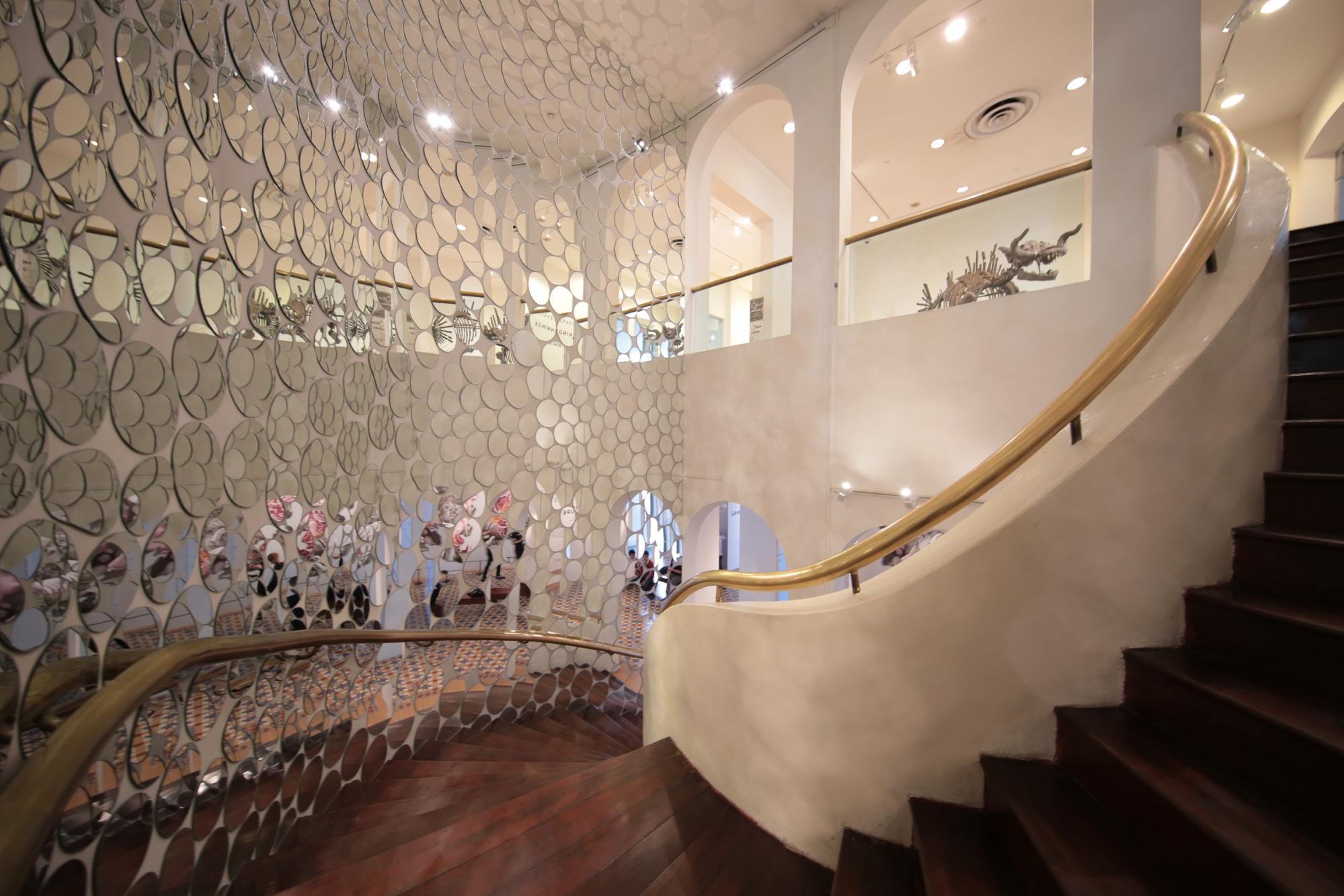 What we found fascinating was that while these mirrors are all reflecting the same thing – the stairwell – the work as a whole dissipates a single image into an explosion of reflections, each mirror revealing an entirely different image. Like these mirrors, the mind is a beautiful tool that gives us humans differing views and opinions, even though what lies in front of us might be the same.

Where to find it: At Singapore Art Museum’s spiral stairwell.

Inspired by the Singapore Human Resources Institute (an institution established in the same year as Singapore’s independence to promote human resource management and development, which is integral for the nation’s economic development), Indonesian artist Ade Darmawan has filled a gallery in the third floor of Singapore Art Museum’s annexe building, SAM at 8Q, with found objects, collages, and pieces of antique furniture. 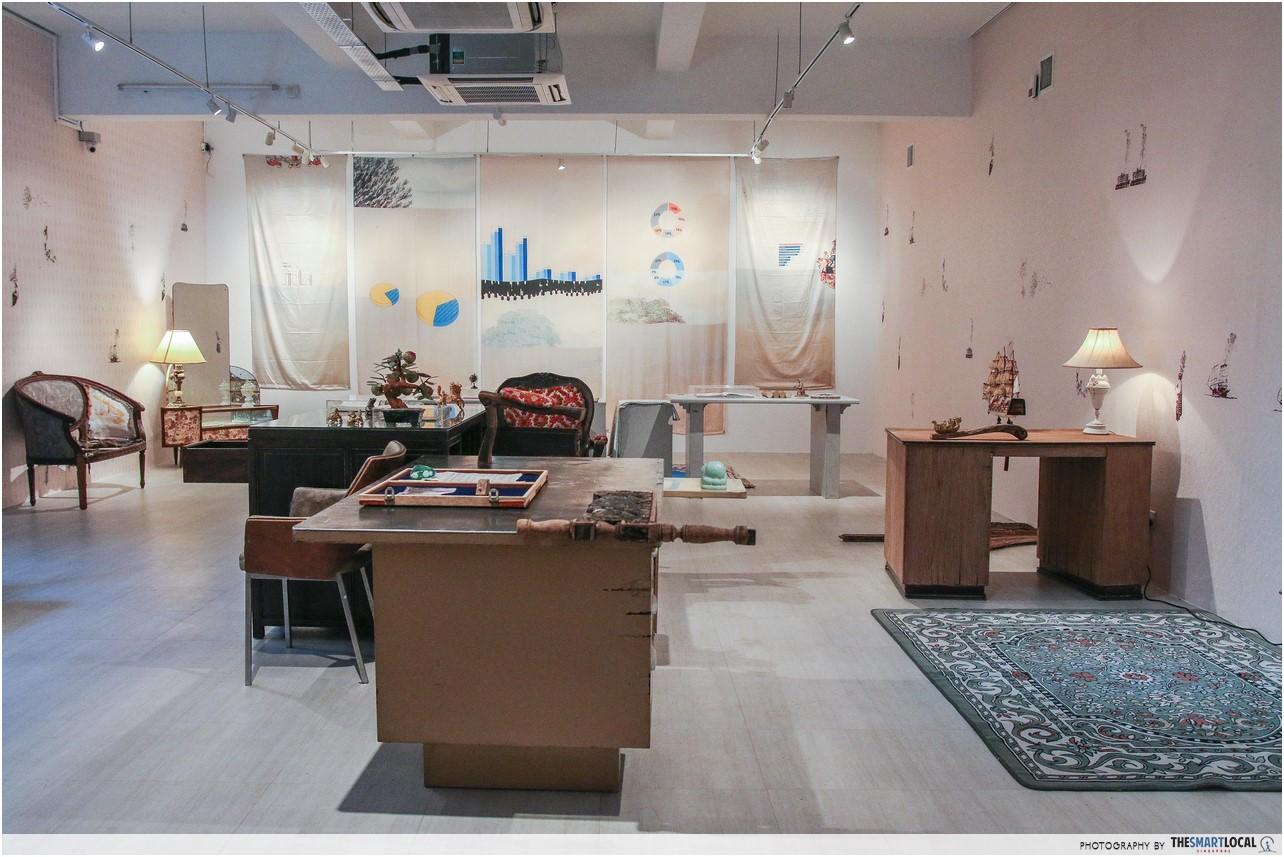 As you take a closer look at the items in the room, you will begin to notice in each object a little quirk, or wonder about its seemingly random arrangement (such as a curious collection of stones or an assemblage of broken pieces of furniture).

All the items in the Singapore Human Resources Institute can once be found in the offices and homes of Singaporeans and Indonesians, each bearing detailed histories that speak of national aspirations and capitalist ambitions. On their own, each object may seem insignificant; collectively, these discarded remains reveal the transformations that have shaped the Singapore and the region. 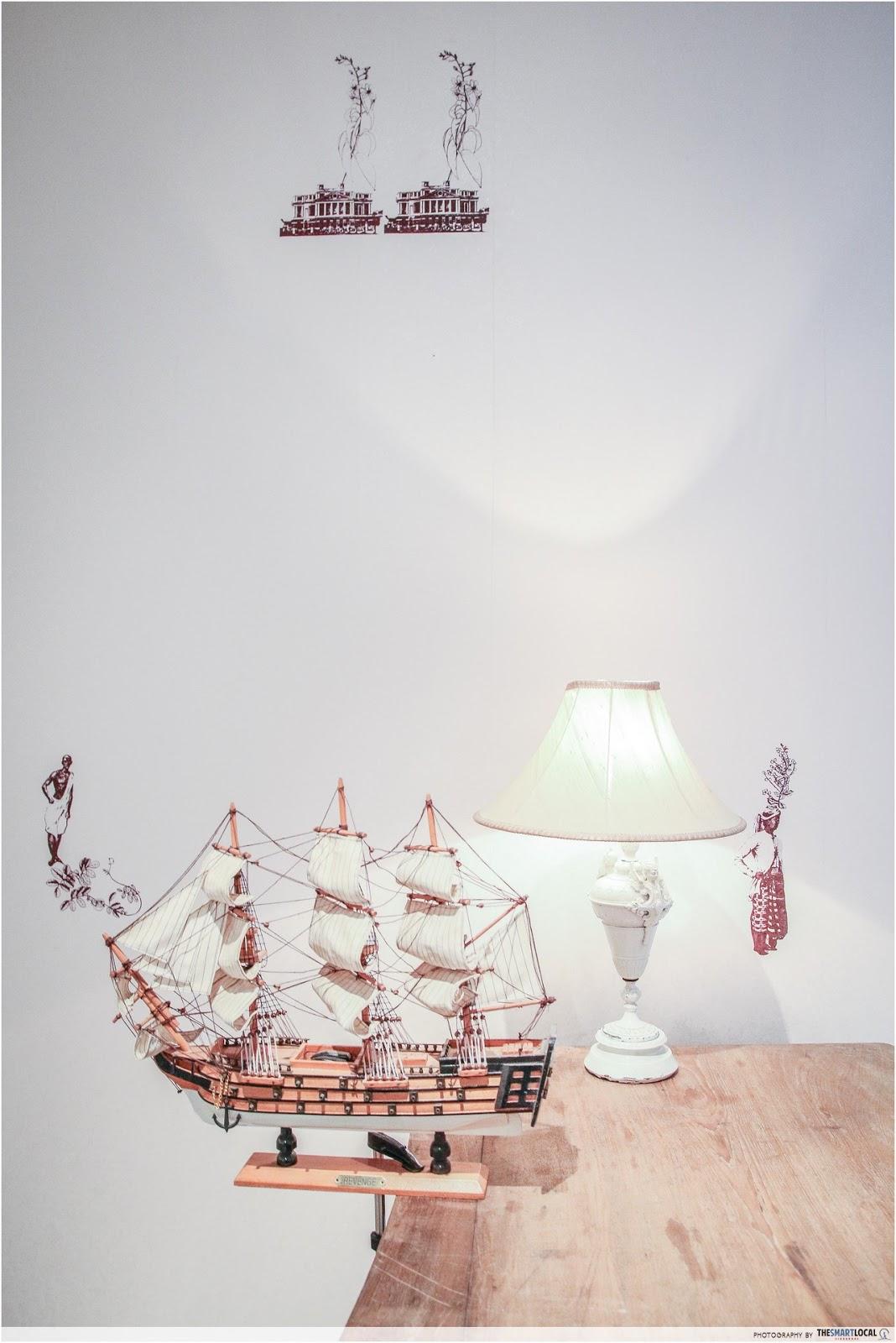 Where to find it: Level 3 gallery of SAM at 8Q. Turn right after going up the staircase.

5. The Universe Inside Us – “Cooking the World” by Subodh Gupta 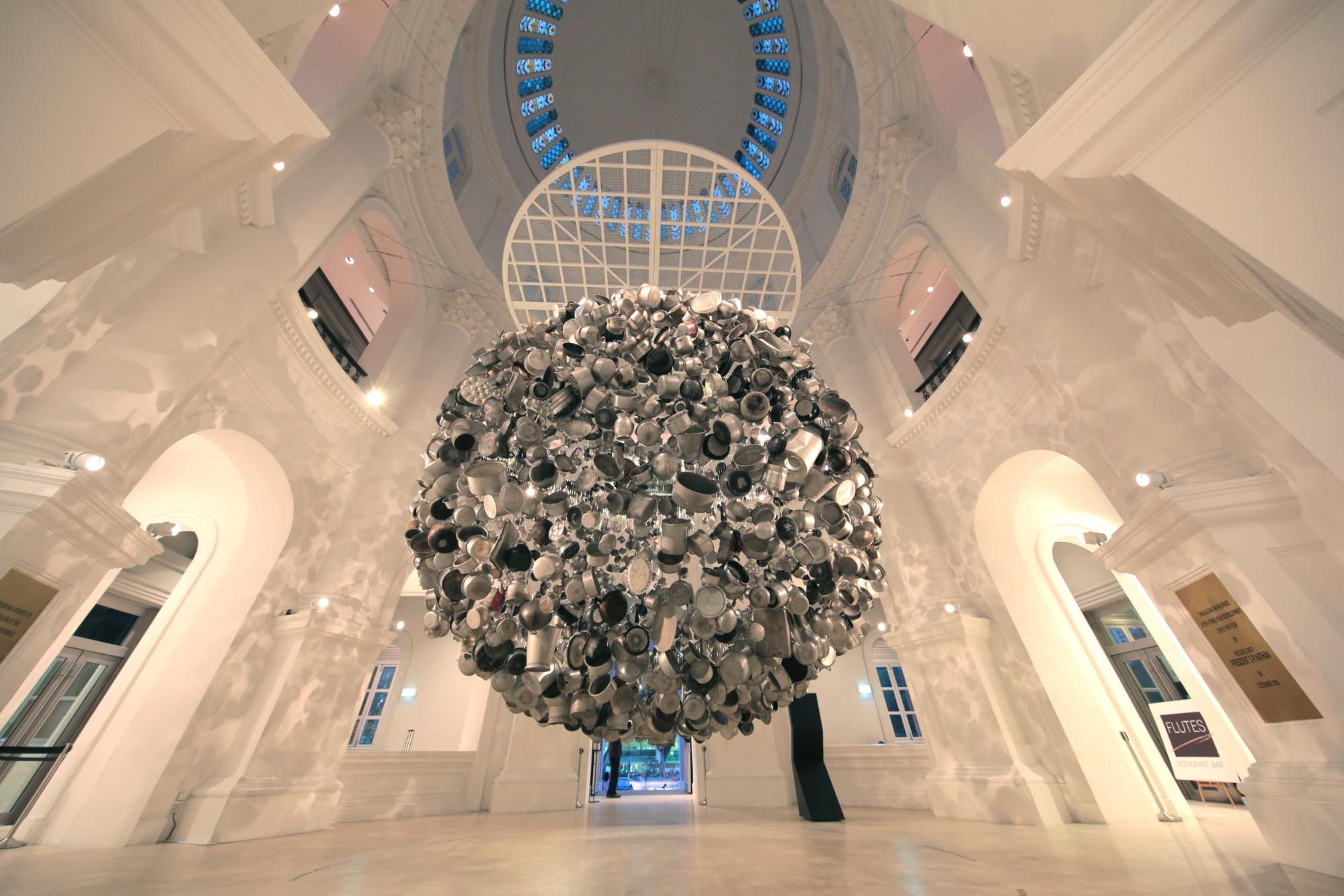 To most, pots and pans are only functional as cooking utensils and nothing more. However, for this year’s Biennale, Indian artist Subodh Gupta has collected more than 3,000 aluminium plates, cups, pails and pots to create an enormous monochromatic sphere that hangs in the Rotunda of the National Museum of Singapore. 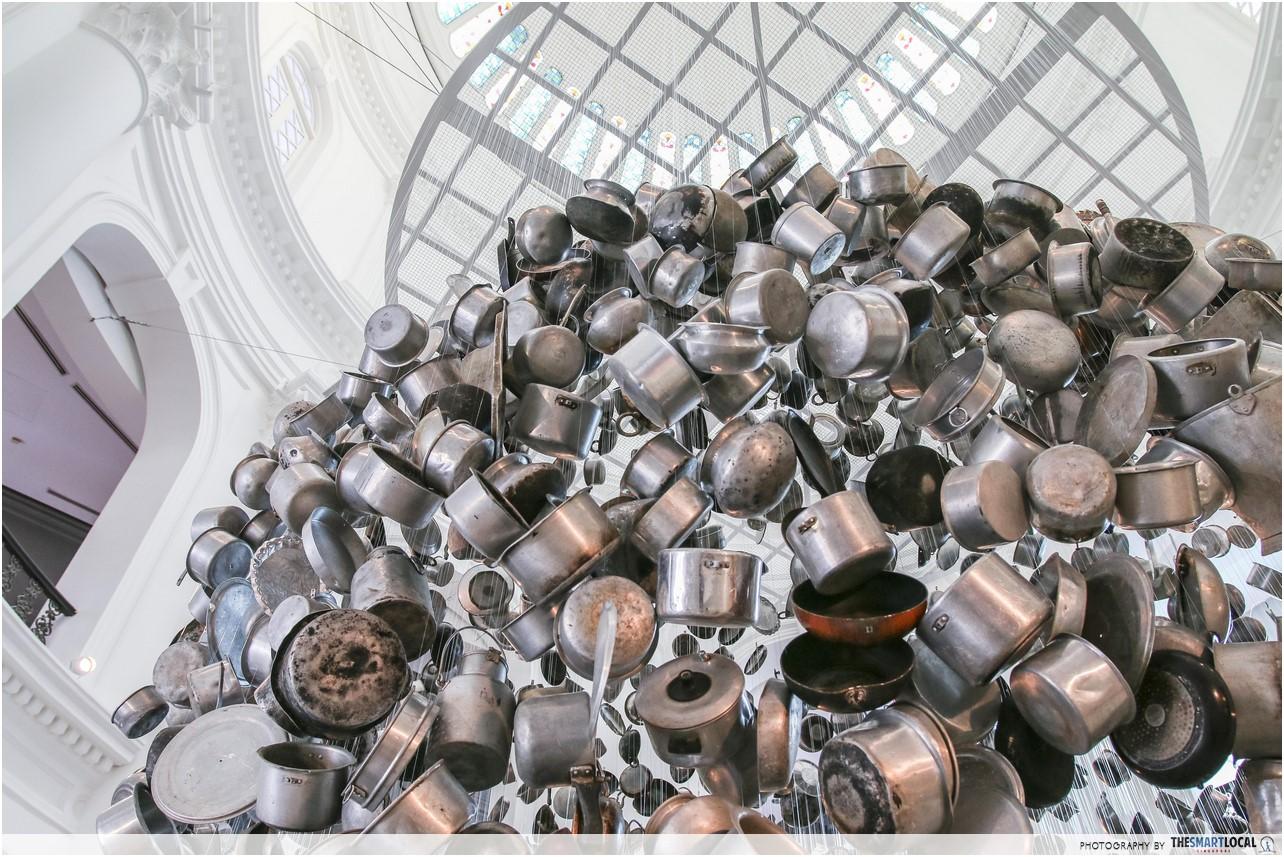 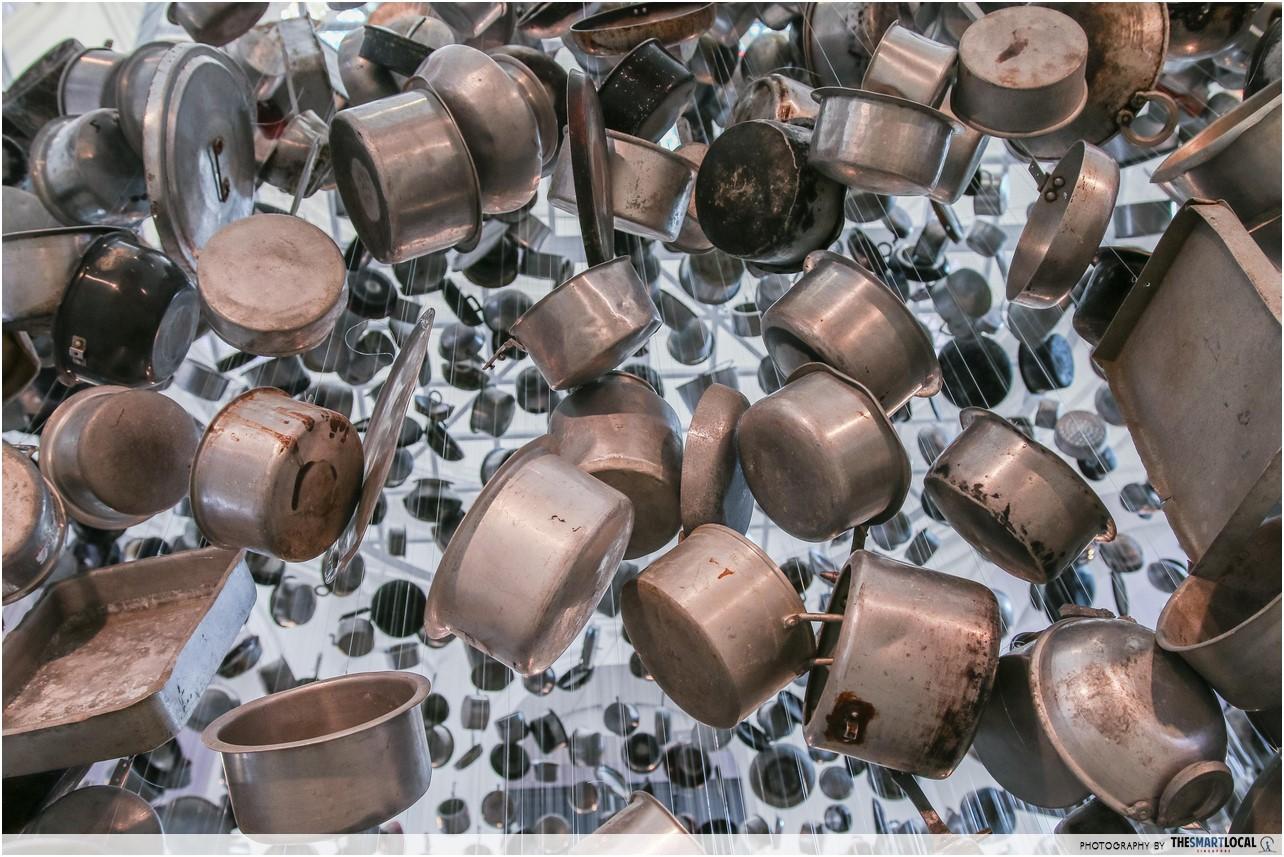 Inscribed in the dents and soot encrusting the rims and undersides of each worn-out utensil are personal histories of people marginalised by life and history. Inspired by everyday realities he’s observed, Gupta has channeled India’s wide poverty gap into his artwork – the the 6-metre tall monochromatic galaxy of pots and pans refers to the differences between the parallel realities of our societies, where excessive opulence exists alongside widespread deprivation. 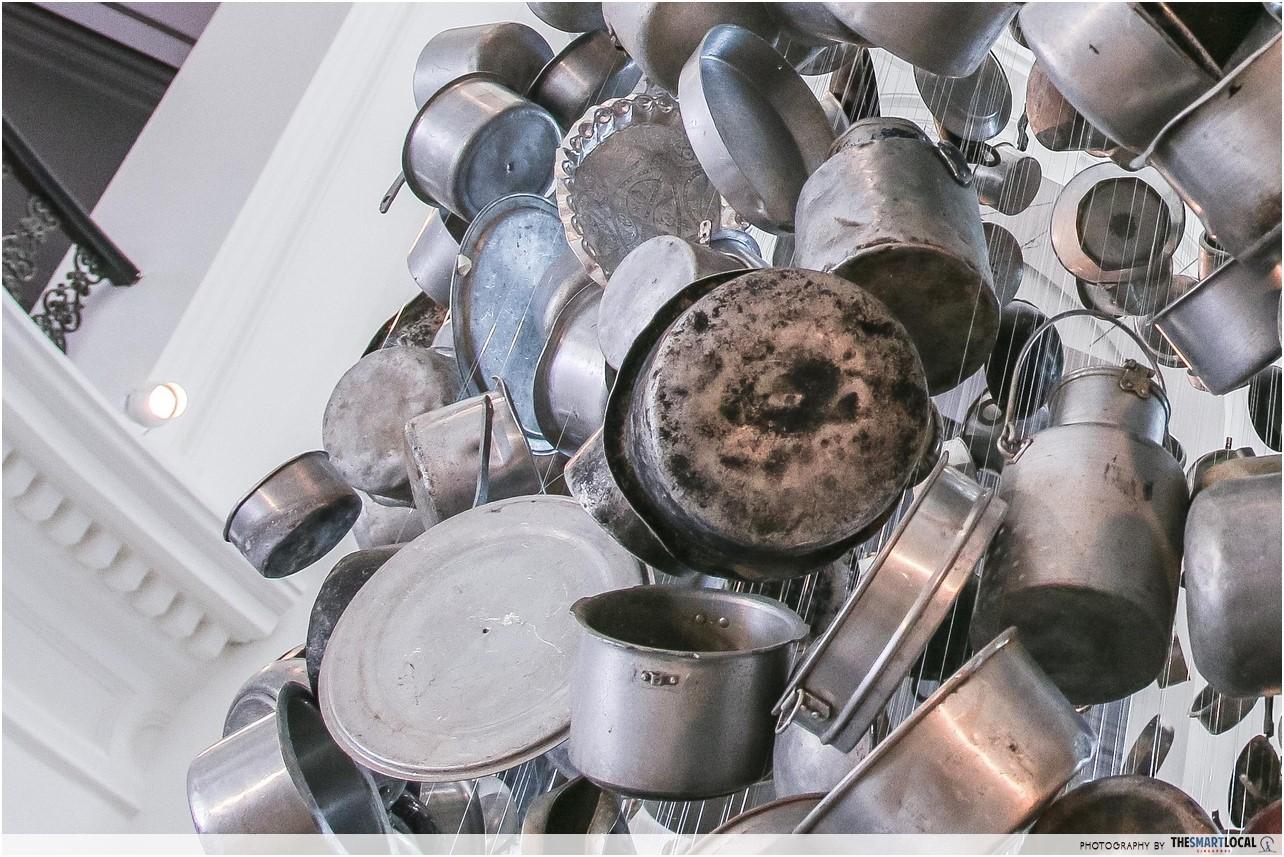 Where to find it: At the main lobby of the National Museum of Singapore.

6. The Chamber of Secrets – “Putar Alam Café” by Azizan Paiman 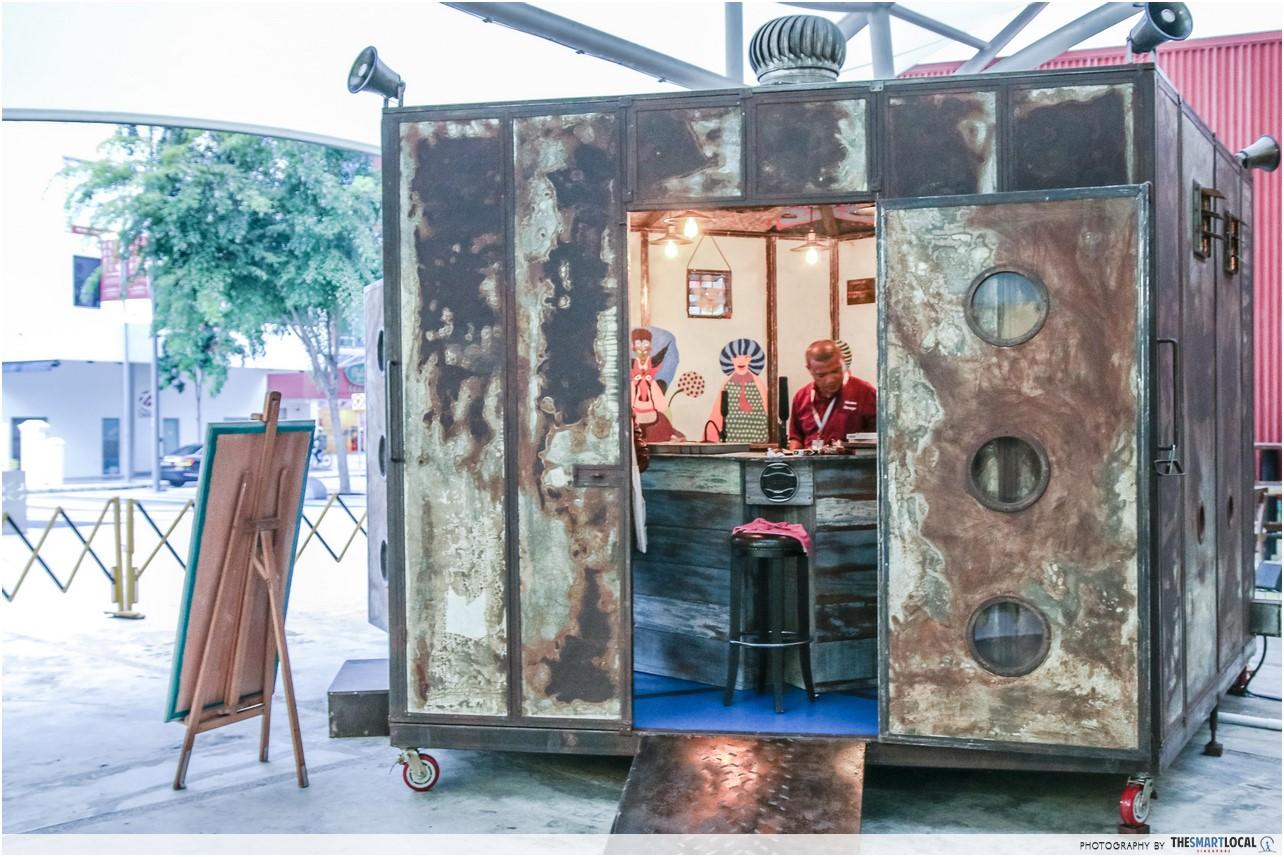 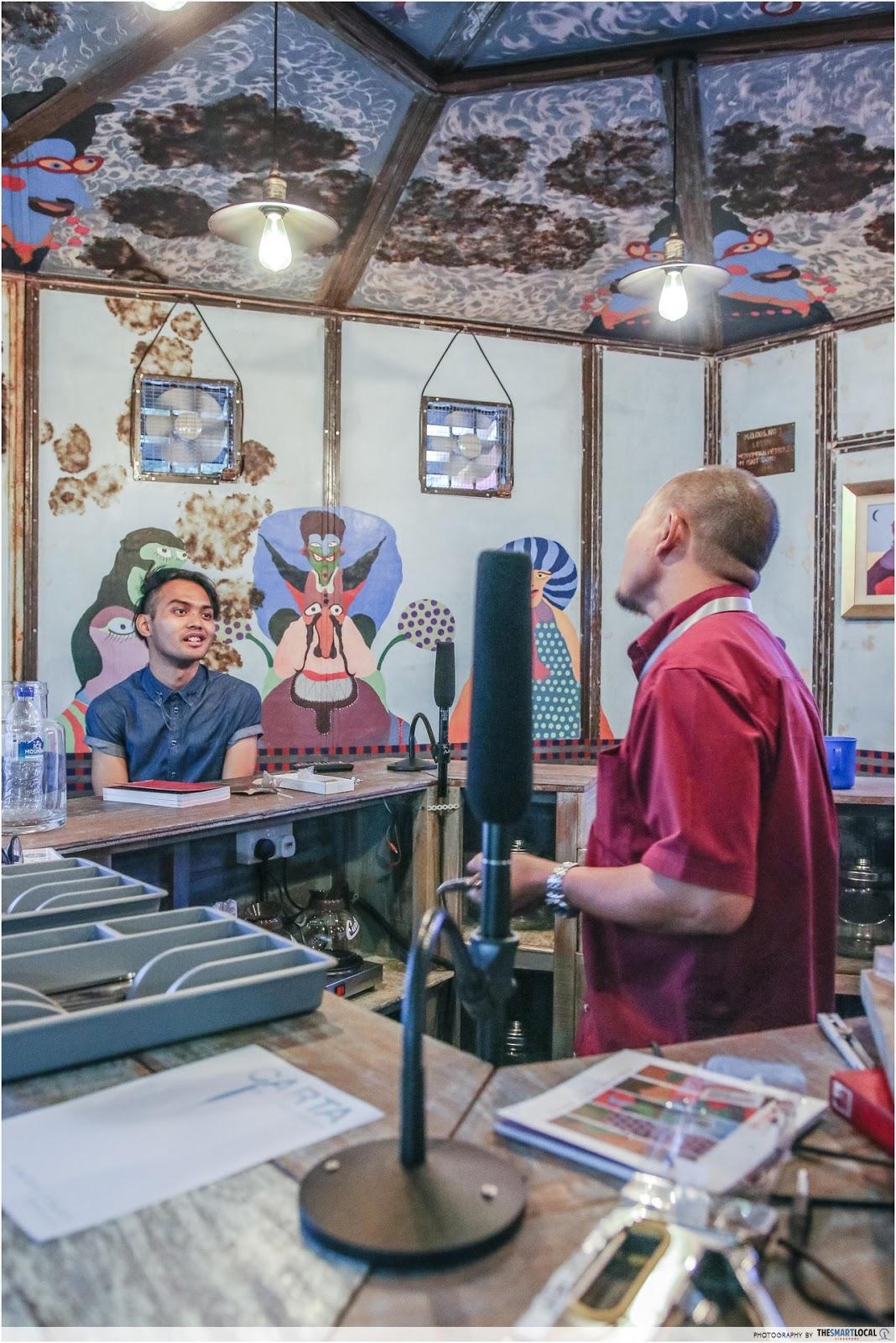 ‘Putar Alam’ in Malay means ‘charlatan’, someone who deceives and tricks others for his own gain. And right at the entrance of SAM at 8Q sits the Putar Alam Café – a pop-up café created by Malaysian artist Azizan Paiman.

During the opening weekend of the Singapore Biennale, the artist acted as both bartender-server and mediator, serving up snacks and drinks in exchange for conversation. A mounted television plays a muted news channel in the background, as the artist chats about current affairs with visitors, or responds to their comments on the artworks on the café walls. This work is a social experiment to show how the media, possibly the biggest ‘putar alam’ there is, profoundly affects our perception and understanding of the world.

The artist returns in January 2017 for another round of honest and friendly banter at his Putar Alam Café, so be prepared to be delightfully confronted with doses of socio-political commentary and truth bombs over some light bites and “capitalist soda” (aka Coca Cola).

Where to find it: At the entrance of SAM at 8Q, beside Standing Sushi Bar. 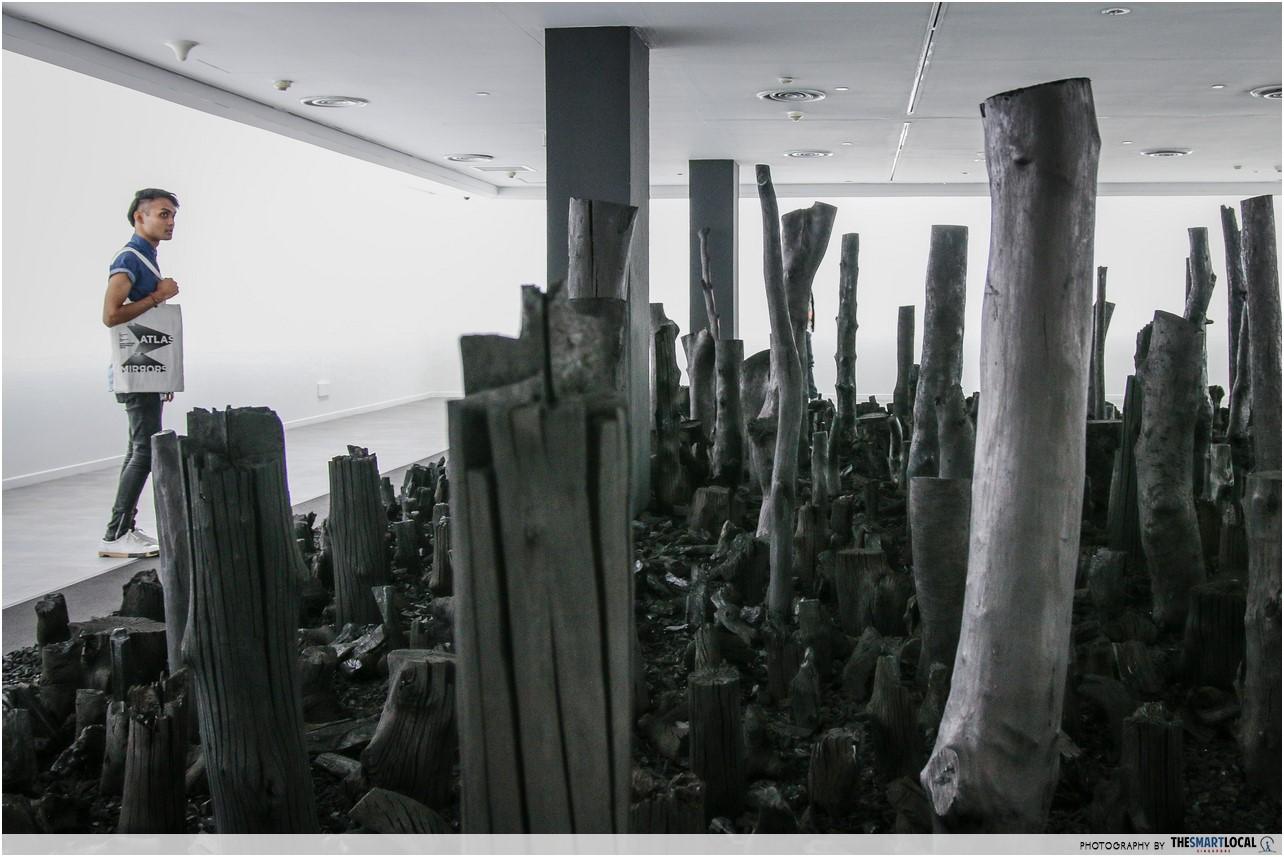 The remains of a blackened forest stand at the third floor at the Singapore Art Museum, starkly contrasted against the white gallery space. 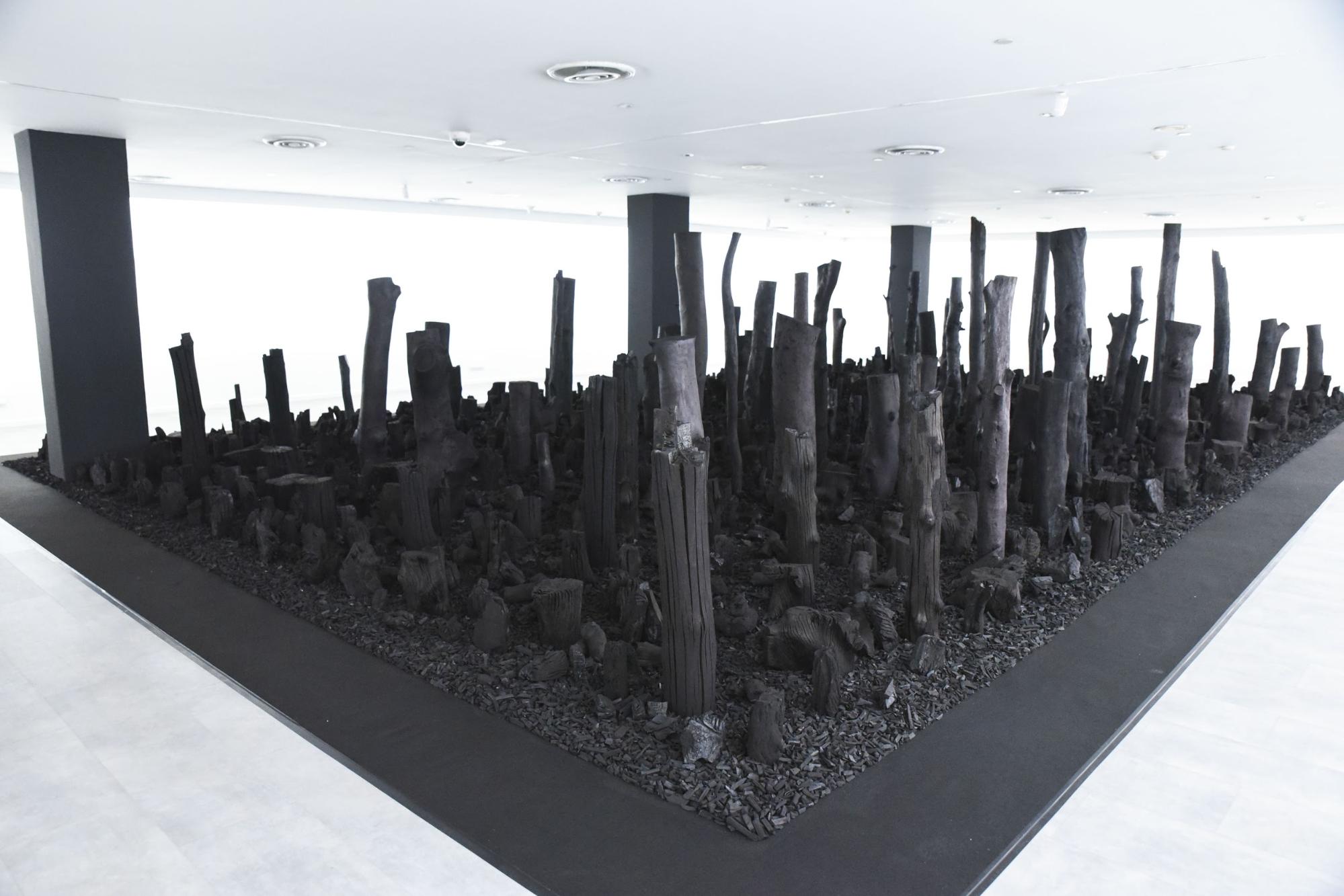 This artwork is the latest rendition of Singaporean artist and Cultural Medallion winner Han Sai Por’s Black Forest series. Unlike previous works in the series, where blackened logs were always found lying on a bed of charcoal, Black Forest 2016 presents a forest where all the charred tree stumps remain standing upright. The work recreates an all-too-familiar scene from the hellish forest fires, consequences of which plague our air yearly. While the installation speaks of our destructive nature and brings deforestation to light, it also demonstrates Nature’s resilience to every imaginable disaster.

Where to find it: At Singapore Art Museum, head to level two via the lobby’s spiral stairwell and head to the right wing, which is the Queen Wing. Take the staircase to level three. 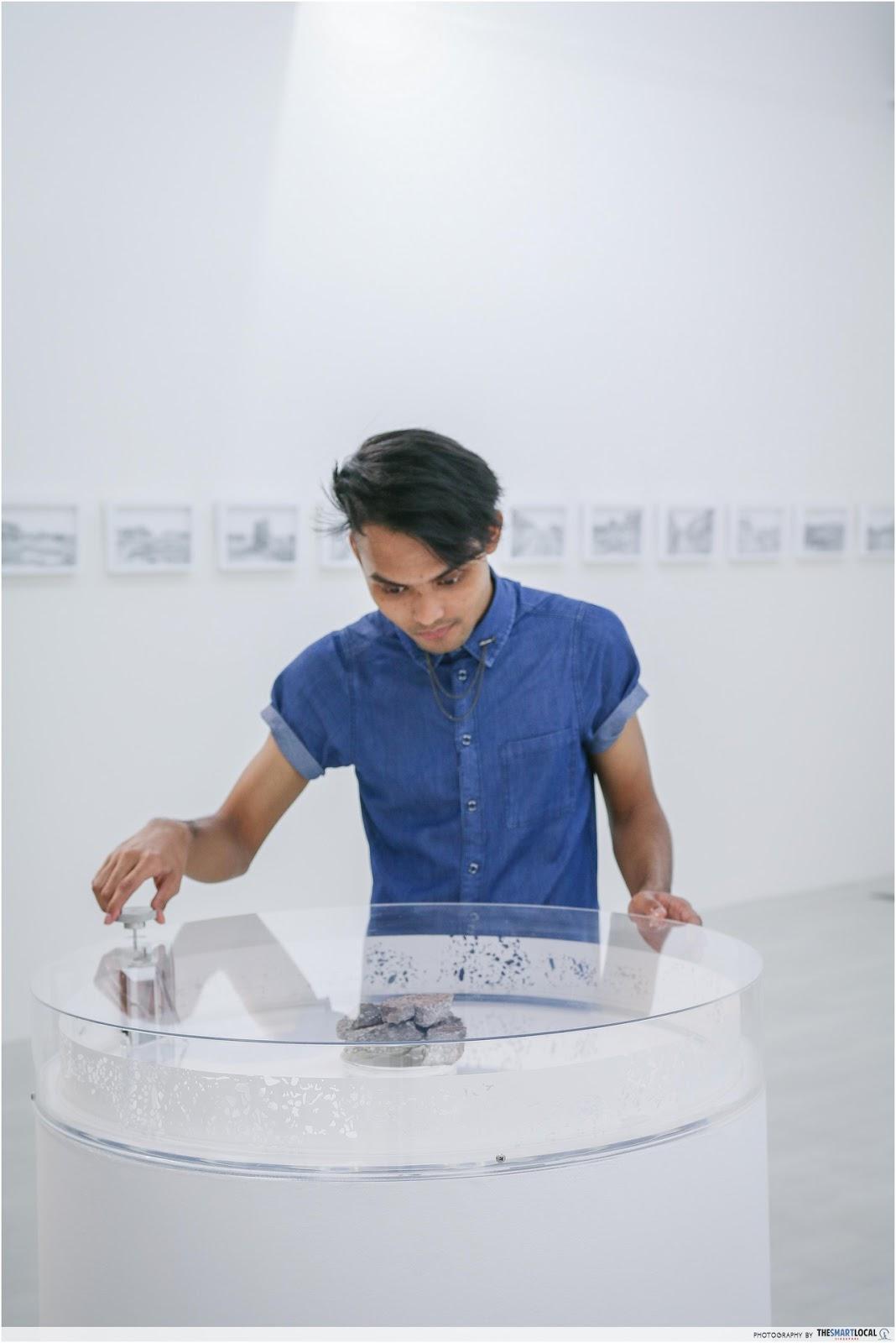 Surrounding a metal island sculpture at the first floor gallery of SAM at 8Q are intricately hand-cut loops of paper that run along the perimeter of three super-sized petri dishes. Spin the dials located on these, and soft, tinkling tunes will fill the air. That’s right, you’re playing the coolest-looking music boxes in the world. What’s more, it’s not just any ordinary tune you’re listening to. The notches in the loops of paper, which serve as score sheets, are based on actual indentations in pavements, paths and roads in Singapore, each painstaking cut by Singaporean artist Melissa Tan. 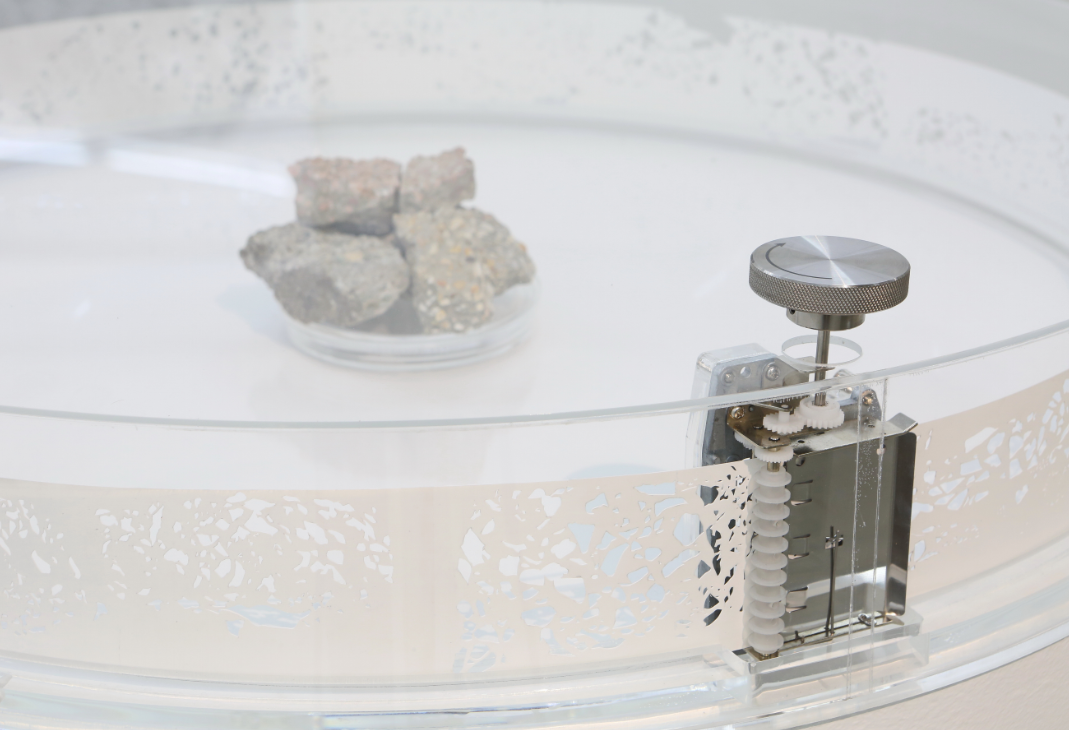 The work is thus a poetic sound recording of our landscape – a reminder that everything, from our built and natural environments, has a part to play in society’s orchestra.

Where to find it: Enter SAM at 8Q and head to the gallery at level one. In a series of haunting photographs of bleak landscapes, Bangladeshi artist Munem Wasif’s Land of Undefined Territory is an exploration of human nature that keeps tying political connotations to land. While his pictures are taken from a territory that has seen much violence and death – the disputed border that separates India and Bangladesh – the images of barren land could easily be of any other location, and yet it is not. This makes us wonder by whom were maps and borders conceived, and the political and economic intentions that drove such borders to be created in the first place. 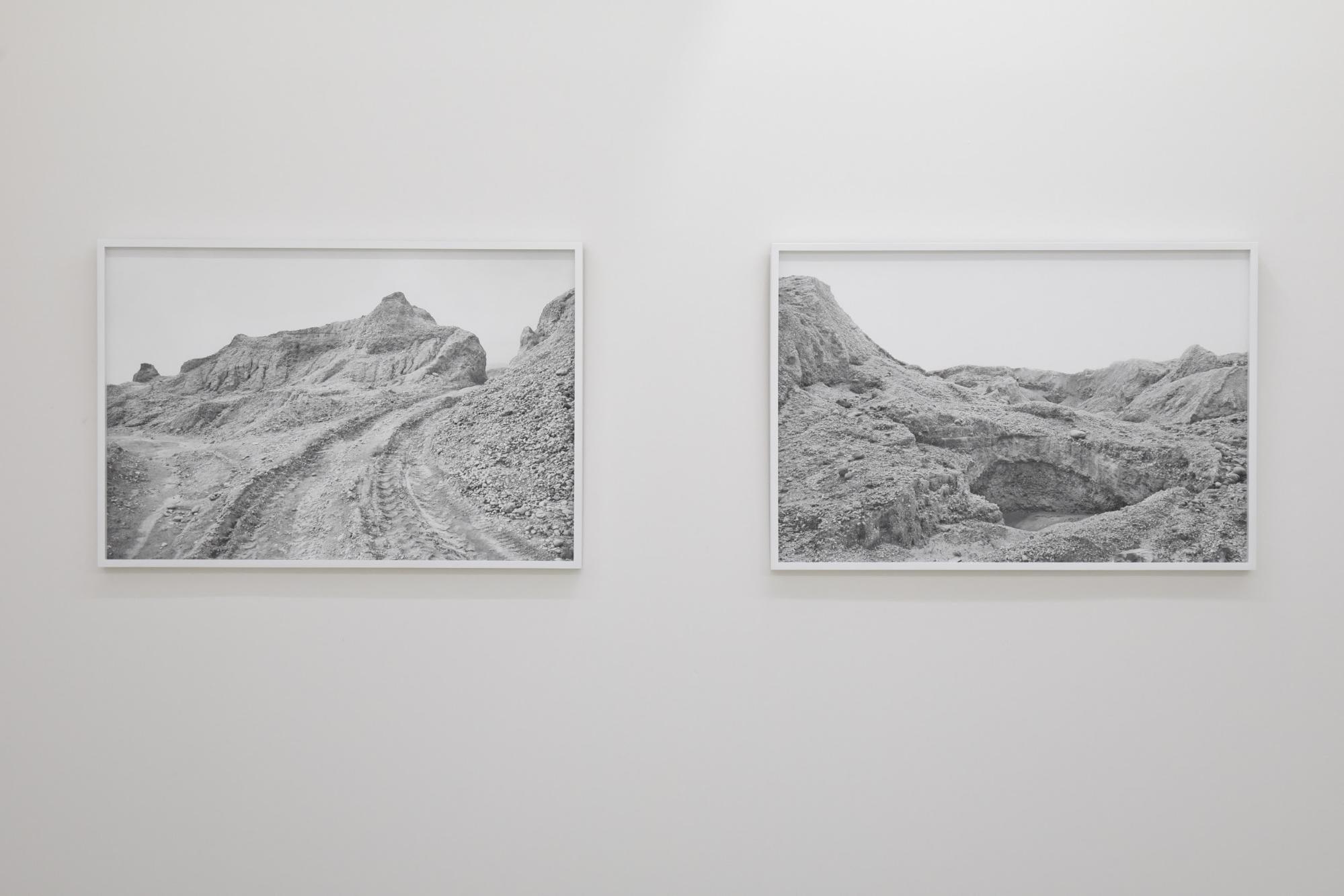 Where to find it: Enter SAM at 8Q and head to the gallery at level one.

Art installations at the Singapore Biennale that will steal your gaze The new edition of Singapore Biennale, titled An Atlas of Mirrors, takes us through a constellation of over 60 artworks by artists from all over Asia. From monumental installations to film and sculpture, the exhibition imagines the world anew and prompts different ways of perceiving ourselves, while revealing distortions that may prove to be false realities.

Each artwork works a different cog in our mind, showing us either an alternate reality or a truth too close to ignore. And if you think the artworks cannot get any more out-of-this-world than the nine mentioned, then this exhibition will prove you wrong.

Anchored at Singapore Art Museum and spanning 6 other venues within walking distance, the Singapore Biennale takes place from now till 26th February 2017 – so set a date, and brace yourself for some soul searching!

Find out more about Singapore Biennale 2016: “An Atlas of Mirrors” here.

This post was brought to you by Singapore Art Museum. 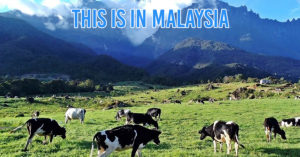