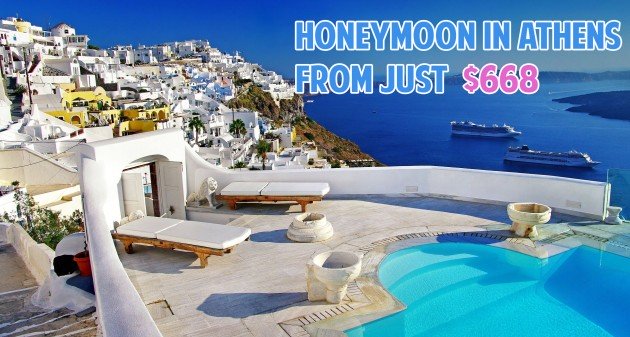 You’ve coughed out the down payment for your BTO, and spent a bomb securing the wedding venue, photographers, band, dress, invitations… the list goes on. But this doesn’t mean you have to settle on the nearby Bali or Phi Phi Island for your honeymoon – in fact, you won’t have to settle for Asia at all.

This 2017, you’ll be going to Europe – diving into the deep blue Mediterranean sea, catching gorgeous sunsets and island-hopping your way to Santorini – all for cheap. Because Scoot can now fly you to Athens from just $334* one-way – and if you enter the promo code “GOGREEK” from 22 February till 3 March 2017, you’ll even unlock 20% off selected fares.

Just pair your affordable flights with these 10 pocket-friendly yet ‘polý romantikó’ things to do in Athens:

*Prices accurate as of February 2017

Walks by the beach with your beau at sunset are mandatory for newlyweds when you’re beach hopping. With Athens ranking 3rd for the world’s best beaches, you’re never short of award-winning coasts like Vouliagmeni, Voula, Glyfada and Varkiza. Their sandy shores and crystal clear waters are the gold standard of beaches.

*BONUS* Share a romantic sunset at the Temple of Poseidon 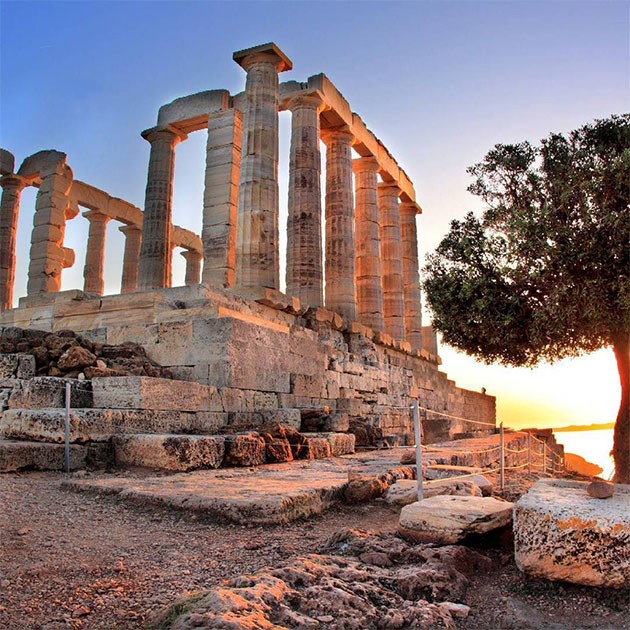 Driving to catch the sunset at the Temple of Poseidon at Cape Sounio, is the only way to round-off your beach-hopping expedition. Catch the sun dip below the horizon of the Agean sea as you chill on temple ruins.

2. Relax in the thermal waters of an outdoor lake spa 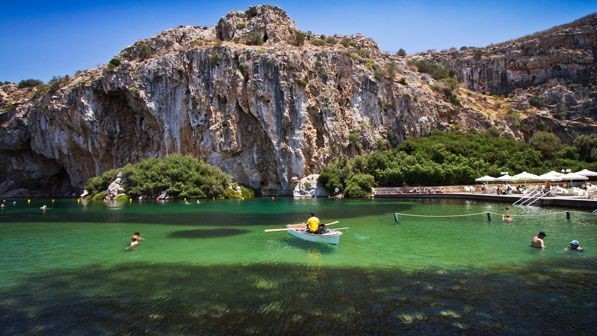 Nothing says “romantic” like some one-on-one time at an outdoor lake spa set in the rejuvenating thermal pools of Vouliagmeni Lake. Spend a lazy afternoon soaking in waters from underground thermal springs, delicately balanced with salt and minerals to relax your muscles and improve the condition of your skin.

And if you’re itching for some activity, there’s tons else to do. Try snorkelling, hiking, biking and even fitness exercises at this all-in-one lake spa retreat. 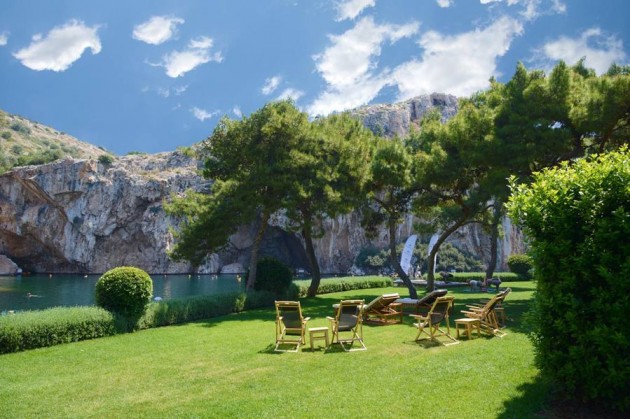 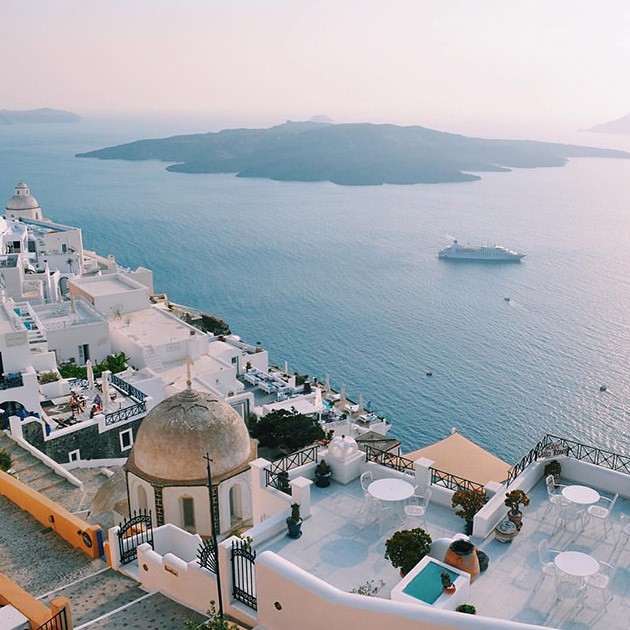 The backdrop to many wedding shoots is the unmistakeable whitewashed walls of Santorini. And with ferries or domestic flights to take you from Athens to this island paradise, you too can have a dreamy wedding shoot without burning a hole in your pocket. 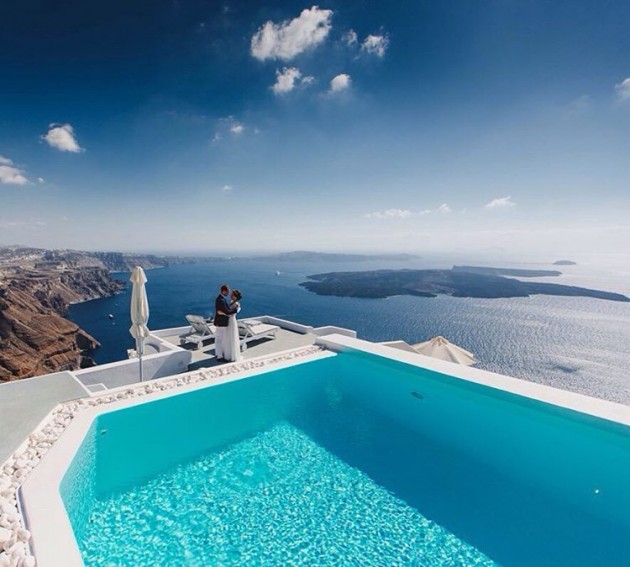 Departing Athens’ Piraeus port at 7.25AM daily, a ferry gets you to Santorini by 3PM the same afternoon for only €20/pax. It bypasses other Greek islands on the way, so you might want to check island-hopping.

4. Conquer the very top of Athens and watch the sunrise/set 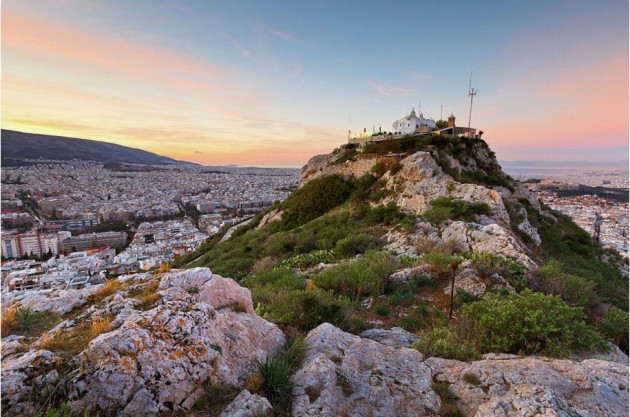 Get ready to drag bae out of bed at 5AM, because the tremendous view at the top of Mount Lycabettus is worth you sacrificing some shuteye. Standing 300m above sea level, you’re literally at the top of Athens once you hit any of the 2 peaks. You’ll wonder if the Greek gods themselves have such a stunning panoramic 360• view of the bustling city below.

If you’re the self-professed fitspo couple, embrace the full 45-minute climb, starting from the nearest metro station (Megaro Mousikis), otherwise go later in the day, take the funicular a.k.a. the “cheaterbug cable car” (8AM-12AM), and the hike is shortened to just 15-minutes!

And if you need some respite from climbing this “mountain” – really it’s just a hill – head to the Church of Saint George or Lycabettus cafe for some food and drinks before making your descent.

5. Paktor like a local with a date night at the alfresco cinema 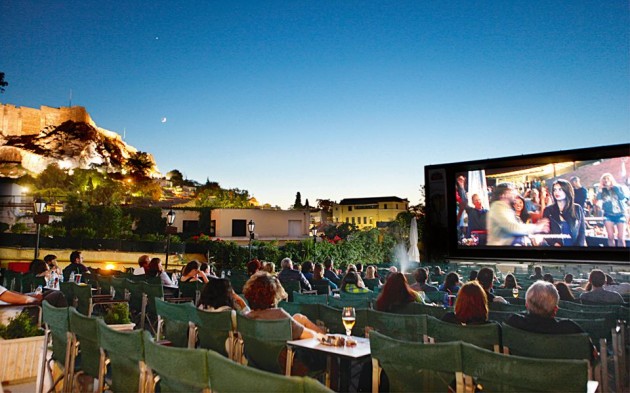 If you thought GV Gold Class was as romantic as movie dates get, Athen’s many alfresco cinemas and theatres will show you otherwise. Set in intimate gardens, romantic rooftops to empty carparks, there are endless date night options with over 90 “pop-up” screens across the city.

At cinemas like Cine Thisio or Cine Paris, catch remastered Hollywood classics to European exclusives for €6 and get a chance to experience what locals do on their date nights.

For spoil market movie deals, check out Cine Pallas, offering you three movies for the price of €10 for your movie marathons. Regardless of cinema choice, be sure to get there early or book your tickets in advance or you’ll have to brave the queues at the box offices outside.

Check out: Cine Pallas | Cine Thisio | Cine Paris | More
Price: €6 and up
Ps. Athens is also home to one of the world’s most famous outdoor theatres – The Herod Atticus Odeon. So whether you’re into theatrical plays or punk rock concerts, there’s always a show for you to catch on this ancient stage.

6. Eat your way through the Athenian Streets for cheap 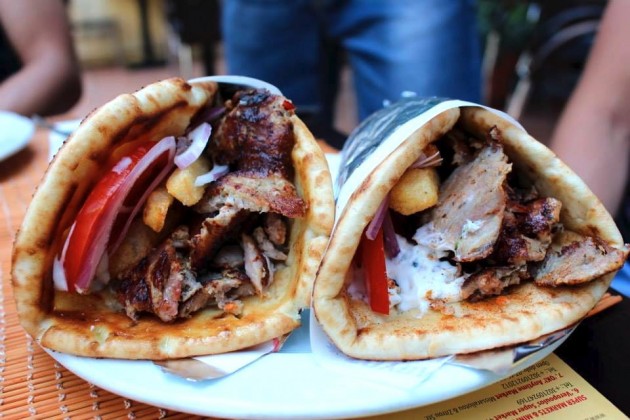 A must-try in Athens are Greek gyros at no-frills joints like O Thanasis and Bairaktaris, offering gyros in all kinds of meaty varieties – pork, chicken, sausage or bifteki (burger pattie) for a little over €2!  They sure give our pasar malams kebabs a run for their money. 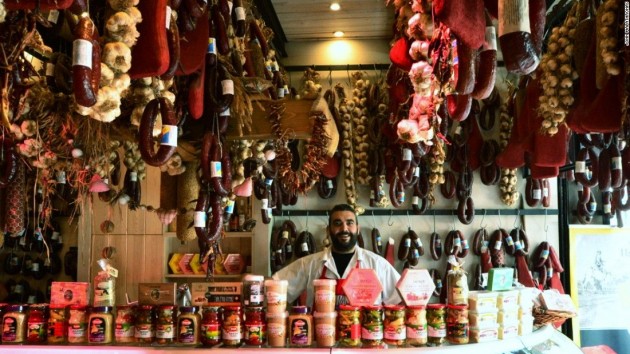 The Athens Meat and Vegetable Market on Evripidou Street. Source

Hit up the Athenian culinary centre Evripidou Street, where shops sell top Greek groceries like herbs, spices to ready-to-eat olives are aplenty. This is where you dapao a taste of Greece for your fambam. Just be sure to stick to AVA approved items only please!

Find out where Greek aunties and restaurant owners buy their groceries for cheap at Varvakeios a.k.a. Athens Central Market, with stalls selling fresh seafood and even sheep’s heads. 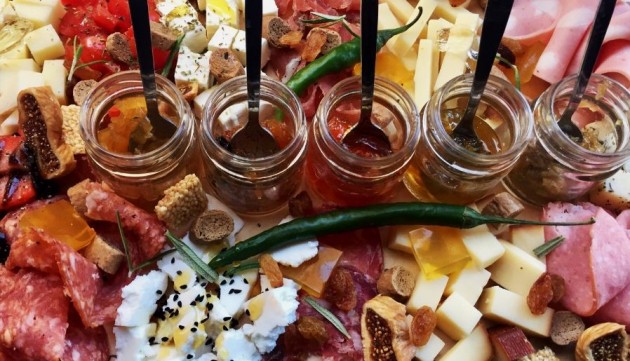 For a fraction of the cost you’d pay at Greek restaurants at Dempsey or Quayside Isle, get the best of traditional Greek food at restaurants like Oineas and Cinque Wine & Deli Bar. The Greek tradition of smashing of plates has been outlawed. But one thing you can expect is some smashing food, homemade from the kitchen and made from the freshest Greek produce.

The Parthenon is still standing strong even after 2500 years. Source

Ancient Greeks loved their gods/goddesses and built temples dedicated to their worship on the Acropolis of Athens. You can’t build a temple for bae, but you can take them to see the temples and trademark columns of the Parthenon, which still remains the iconic symbol of Greece today.

So you know what to do to milk the €12 entrance fee for all it’s worth – pack along your togas, some DIY gold laurel wreaths and snap pictures across the Acropolis in all its ancient Greek glory.

8. Live the stuff of Greek mythology films from just €5 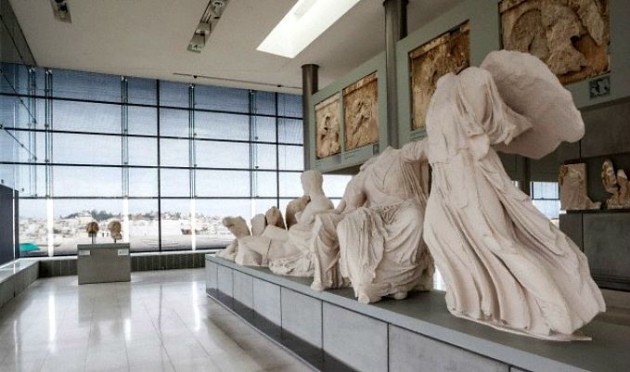 Honeymoons are the best time visit to the Goddess of love, Aphrodite, at the Acropolis Museum, where you’ll get acquainted with all sorts of Greek mythology. Displaying artifacts dating back to 3000 B.C., the museum curated in chronological order, you won’t have issues piecing history together. 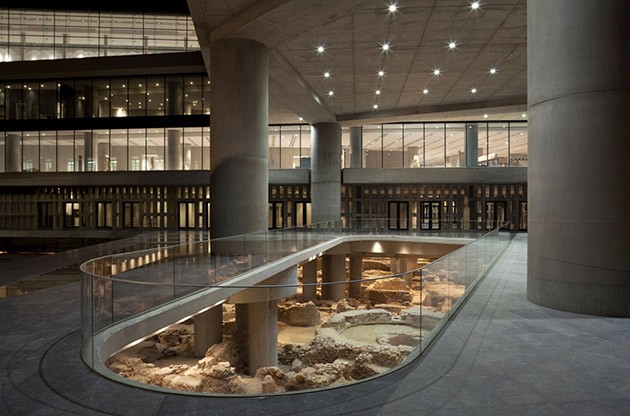 Head down on Fridays to tour the museum with an archaeologist, in an hour-long gallery talk that tells you more about life in ancient Greece to present-day archaeological excavations ongoing right under the museum. And if this isn’t enough for you history buffs, check out this guide to Athen’s museums for more places to visit!

9. Venture into the Haji Lane of Athens for booze 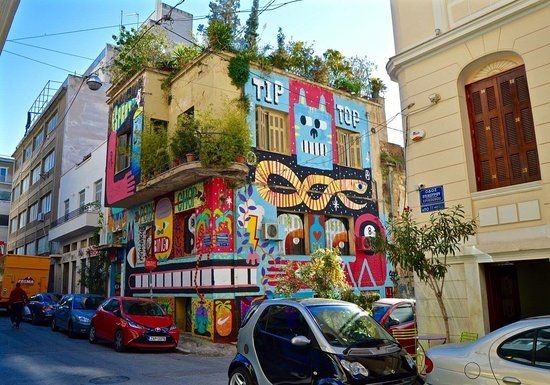 If you’re seeking out familiar “Haji Lane” vibes in this foreign land, venture into the grunge of urban Athens and take to the streets of Psyri – one of the trendiest neighborhood of Athens, home to stylish restaurants, bars, live music and of course, people who know how to have a good time.

A vibrant contrast to the pasty-pale Parthenon and street art, graffiti-ed walls and colorful murals are a lesser known side of the cityscape. 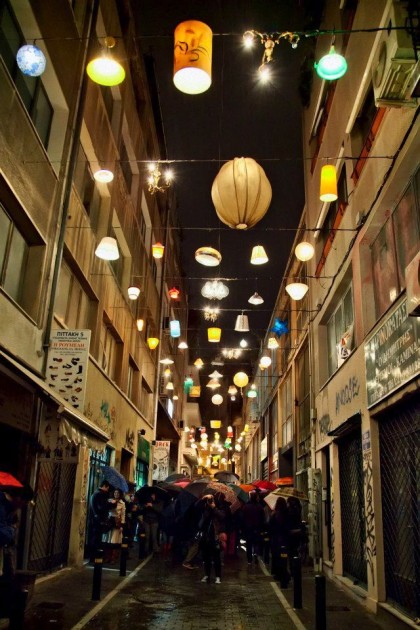 Once night hits, take to Pittaki Street, where lamps of all shapes and sizes light up the small alleyway,  street parties, performances, commercial or music video shoots, and Athens is home to both contemporary art is a the fine art you’ll see in museums.

10. Stock up on souvenirs at the Bugis Street of Athens 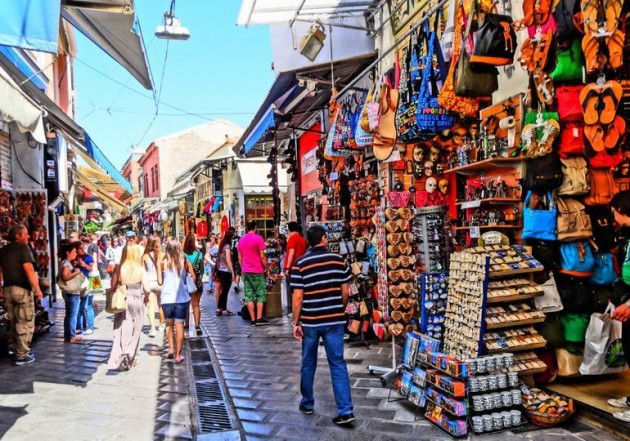 Your friends and family will be expecting souvenirs from your honeymoon haul, so take to Monastiraki Flea Market, the Greek “Bugis Street” to do some shopping. Expect funky bars, restaurants, cafes and of course, stores selling “I Love Greece” t-shirts in all colors.

Here’s the place to stock up on affordable leather goods, backpacks to vintage knick-knacks – and if you’ve friends who collect vinyl records, pop by Jimmy’s Inferno to get them some retro CDs in English or Greek. One man’s junk – used books to antique furniture – can be another man’s treasure. So perhaps you’ll find some neat trinkets to take home amongst the flea market’s pre-loved paraphernalia.

Monastiraki Square & Flea Market
Where: Ifestou, Athina 105 55, Greece
Opening Hours: Closed on Thursdays | Various Hours
Ps. Watch out for your valuables, because the area is known for their proficient pickpockets.

For a once-in-a-lifetime event like a honeymoon, you either go big or go-home. But going big doesn’t mean spending big, and you can lock down a big fat Greek holiday in Athens on a budget!

Scoot is now selling tickets for its first ever flight to Europe from Singapore. With one-way tickets starting from $334* on their fleet of wide-bodied 787 Dreamliner planes, this is a godsend for honeymooners with wedding banquets to pay for. Expect roomy seats, wine for purchase and inflight add-ons like WiFi and ScooTV entertainment, this 11-hour journey will make for one romantic movie-marathon in the sky.

This isn’t just your gateway to the lively Greek culture, tantalizing delicacies, rich history and some swimming in the pristine waters of the Mediterranean, because your honeymoon experience begins even before you set foot in Athens.

So if you haven’t locked down holiday plans from for the second half of this year, have yourself a honeymoon of Herculean proportions in Athens. We’re sure you’ll remember it even till the day of your 40th anniversary. Make your booking between 22nd February and 3rd March 2017 with the discount code ‘GOGREEK’ and shave 20% off selected fares!

Get 20% OFF your SCOOT flight to Athens with the code GOGREEK!