Every time I hear the words “international buffet” and “seafood” in the same sentence, I feel conflicted. I love shellfish, but when raw food like oysters and sashimi are served at buffets, all too often they’re too frozen to taste good. Still, with Sakura’s reputation as a recognised brand, I decided to give it a shot.

Being a halal buffet, it’s an easy choice for class gatherings, and has been around for more than ten years. Sakura International Buffet Yio Chu Kang is the first of the Sakura brand to undergo a revamp, with changes to both its interior and menu.

Sakura’s new concept allows diners a culinary journey around the world, from France to America, Thailand, Japan, and Singapore, among other countries.

Note: The Sakura International Buffet has ceased operations in 2019.

The Buffet By Countries 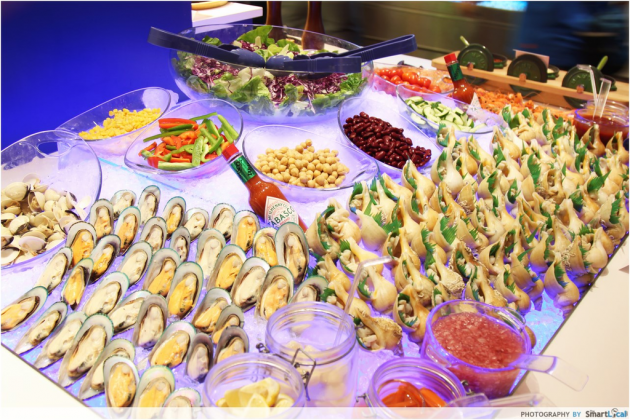 My eyes shone when I saw this. A whole range of seafood laid out on crushed ice, and a cold salad bar to boot. The Whelk a la Bourguignonne was a little difficult to remove from the shell, but was buttery and tasty enough that it was worth the effort.

I liked that the sea snails were sliced up sashimi-style for easy eating, and the consistency and taste was similar to that of abalone. The boiled prawns were also good – sweet, meaty and fresh!

Note: The whelks, boiled prawns, mussels and salmon are only available during dinner.

I was disappointed by the Baked Cheese Macaroni and Meatballs in Tomato Sauce. The meatballs were nothing fantastic, and the mac & cheese was cakey and rather tasteless. The other offerings may be better, with nachos and cheese, hot dogs, and chicken popcorn being on offer. I would skip this section and save space for other sides.

With the amount of fried finger food, this section is probably more for the kids to fill their stomachs. 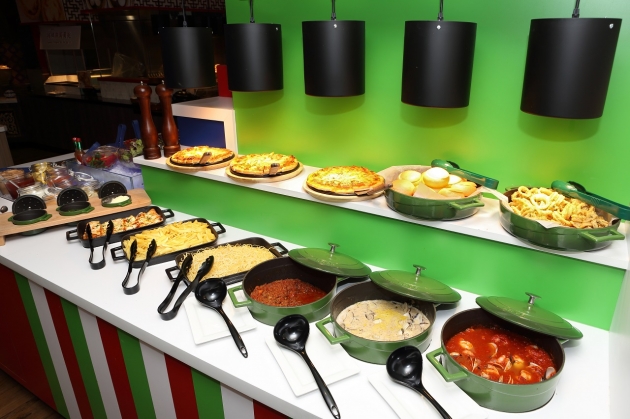 This suffered the same fate as the USA section, with lacklustre items. The lasagne was dry, and the pizza looked cold and unappetizing. I did like that there was a DIY pasta station where you could choose your own sauces to match the pasta. There was also a bread bowl you could fill with soup or sauces, which was slightly crisp on the edges and soft on the inside. 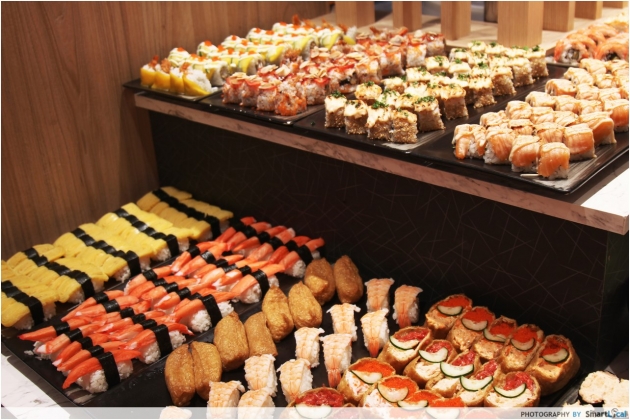 There are selections like tempura, curry beef stew, garlic fried rice, maki, and even aburi sushi! I couldn’t resist taking a few of each, despite knowing they were sure to fill me up. My companion loved the yakitori but I wasn’t as much of a fan of the sticky, thick sauce it was dipped in.

The sashimi was fresh, and there was a selection ranging from tataki bonito to salmon and sweet shrimp. Unfortunately, sashimi is only available during dinner.

The liu sha bao was by far the best of the dim sum on offer. I’d skip them all for more of the molten custard bun! They also have dried scallop porridge if you want something healthier. One thing I like about this section is everything is kept in the traditional dim sum woven baskets, so they stay hot and fresh. 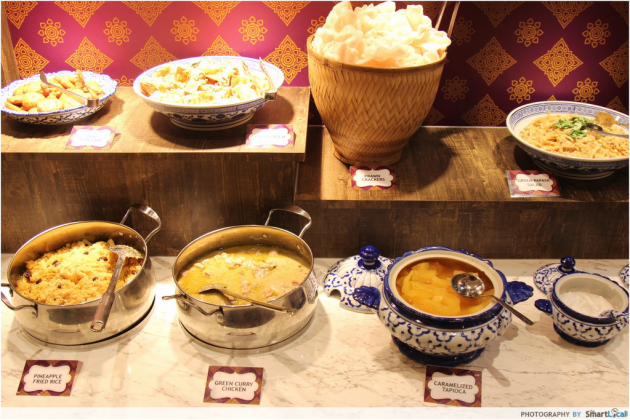 The Green Curry Chicken was surprisingly good – the gravy was thick and not too watered down, and the tender chicken absorbed the stock nicely too. The fragrant pineapple fried rice is also worth a try. They also have caramelised tapioca and papaya salad, if you want to channel your inner Thai. 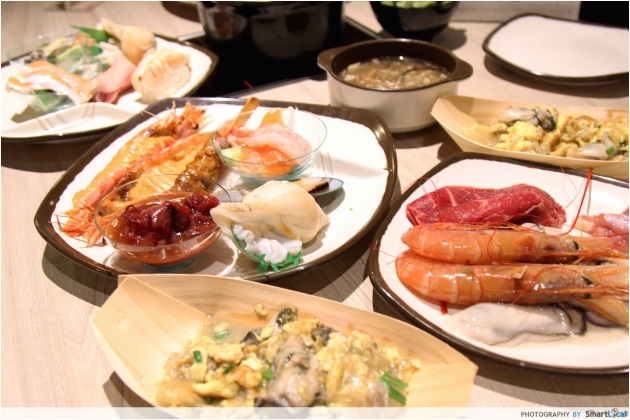 There was such wide a spread that we didn’t get to sample every dish – our tummies didn’t have enough space! You know a buffet is going to be good when you have to prioritise the food to maximise your tummy space! Below are a few items we sampled, as well as their signatures. 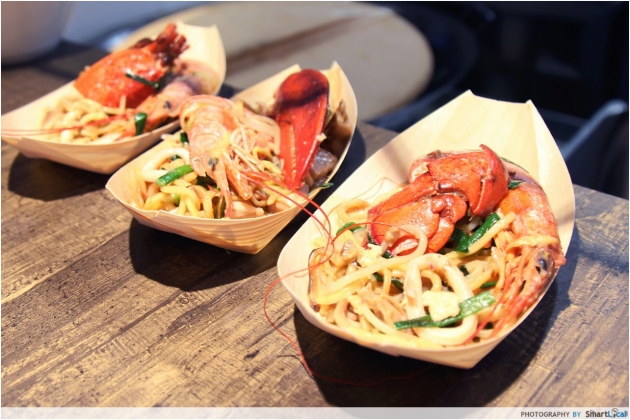 These are made fresh on the spot, and we had to wait a while to try them because they get wiped out really fast. While the noodles were wet like usual hokkien mee, it was too salty for me. It also lacked the wok-hei flavour that I favor in my hokkien mee. The lobster was sweet, but not enough of a draw for me to fill my tummy with these.

Note: This dish is only available during dinner. 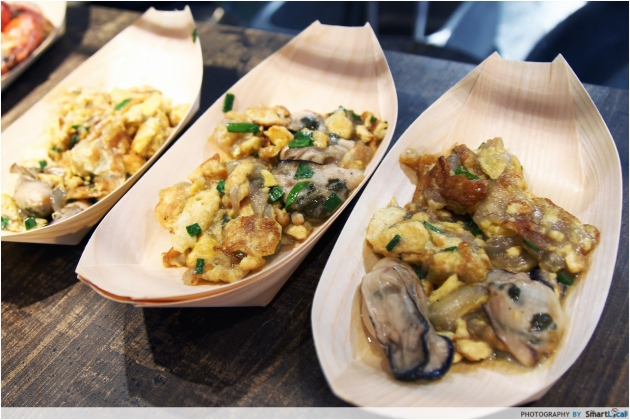 My companion and I enjoyed this very much. The oysters were plump, fresh, and full of flavour, and the omelette was well done too. The ratio of flour bits to egg was just right, without being too starchy. This is not a dish to be shared. 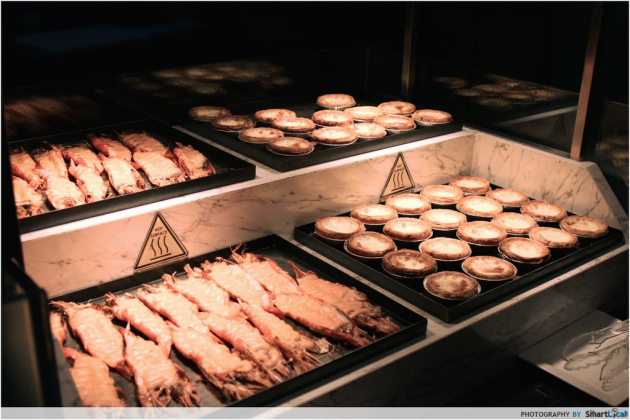 This was one of my favourite savoury items of the night, and it can be found right beside the egg tarts! This is a hot favorite, so you may have to wait a while. It’s topped with a mentaiko-like sauce, and the prawns are tender, meaty, and full of flavour.

This was another item I enjoyed. My companion was adamant that she didn’t like egg tarts, but I forced her to take a bite, and she finished one by herself. The pastry was well done, not too flaky or crumbly, and the egg was smooth and soft. The small bits of bird’s nest added to the sweetness of this dessert. 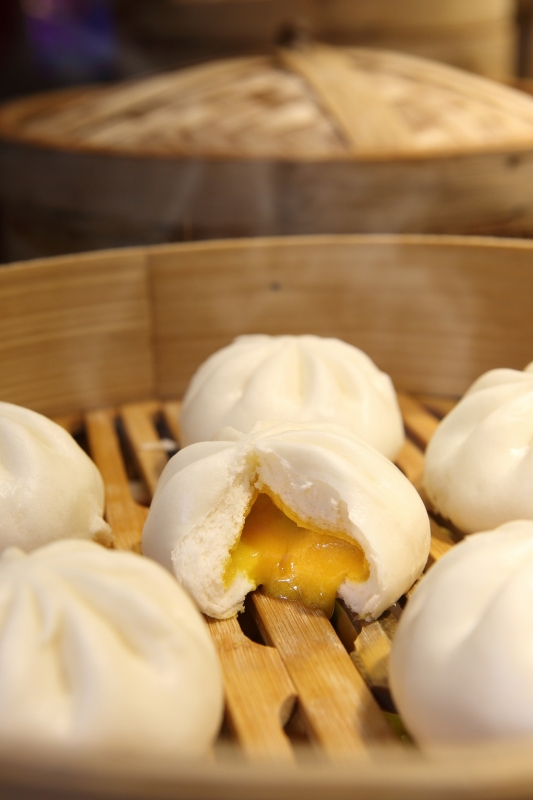 We actually had two rounds of this each because we couldn’t believe how good it was.This was of better standards than we expected, especially because it’s so rare to find places that serve custard buns in buffets. The lava flowed nicely and wasn’t too grainy or oily.

My only complaint was that the bread was slightly too thick, so it didn’t match up to the consistency of the lava. Still, it was fluffy and soft enough that I didn’t mind! 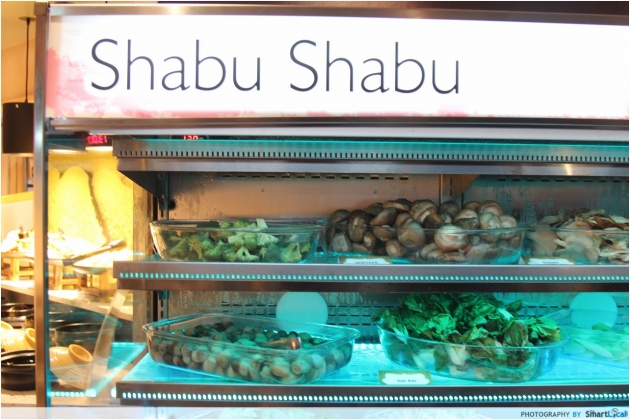 I was pleasantly surprised to see that each table had its own pot of chicken stock collagen broth for the hot pot! I do wish that the meats in the raw section had been marinated first, as it was rather tasteless and the beef’s taste was too strong.

The oysters and prawns were fresh and good though, and there was a variety of vegetables, mushrooms, and egg tofu to add flavour to the soup. I felt the soup was rather bland at first, but after the addition of the vegetables and other ingredients, it was much better. 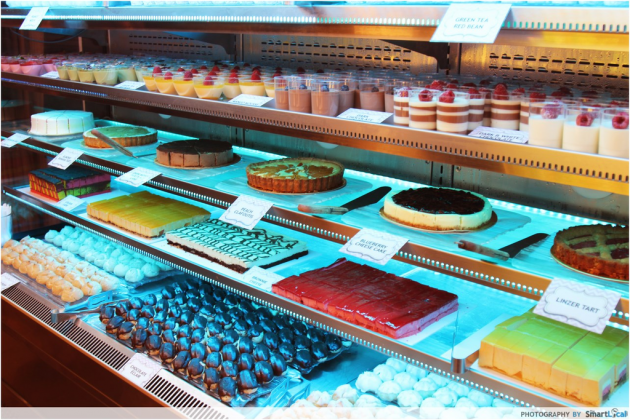 The selection of desserts has something for everyone. From mochi, to rainbow cake, to durian penget and mousse, you’ll be spoilt for choice. The green tea mochi skin was the right consistency without being too sticky, and the red bean filling was generous too. I liked the dark and white chocolate mousse, and the durian penget was thick, creamy and sweet. Durian penget is also only available during the weekend.

If you want something more local, there is bu bu char char and rainbow kueh lapis! For those who want to offset the amount of food you’ve managed to stuff into your mouth, they also have freshly cut fruits, yoghurt, and jellies. 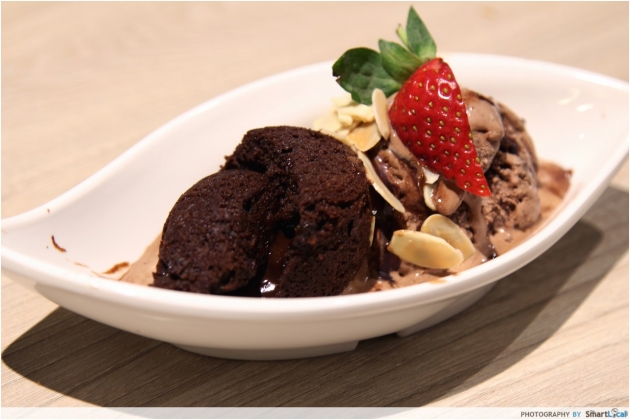 There is also a live station that prepares Lava Cake with Haagen-Dazs Belgian Chocolate ice cream, almond shavings, and strawberries a la minute. I was let down by this, as the chocolate didn’t ooze out at all, despite me cutting the cake multiple times in an attempt to release the “lava”. Still, the cake was moist and chocolatey, and paired with the rich Haagen Dazs ice cream, was not beyond saving.

Sakura has managed to change my impression of seafood at buffets, as well as the standard of items – this is re-branding done right. With the quality of ingredients used, quantity available (over 100 varieties), and freshness of dishes, I will definitely be returning. Dishes that are a must try are the oysters, baked Argentine prawn, whelk, liu sha bao and egg tart!

This article was brought to you by Suki Group.
Original article published on 5th February 2015. Last updated by Raewyn Koh on 17th May 2022. 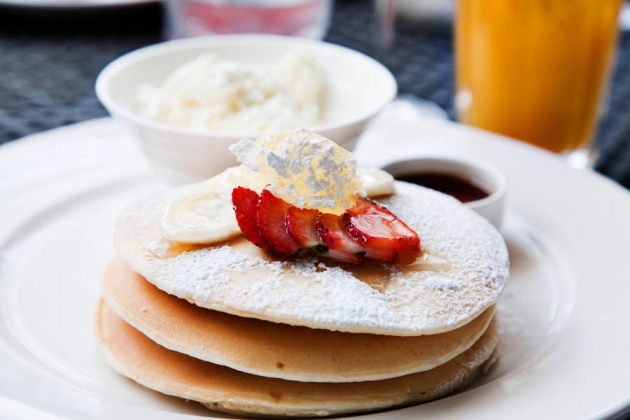