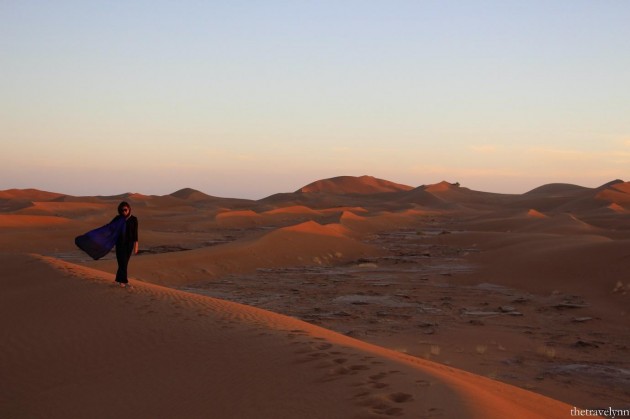 The Sahara, the epitome of mystic awe and Arabian wonders. Spanning much of North Africa, it is the largest hot desert in the world. Conditions are harsh: sand temperatures reach up to 80 degrees with no water in sight. 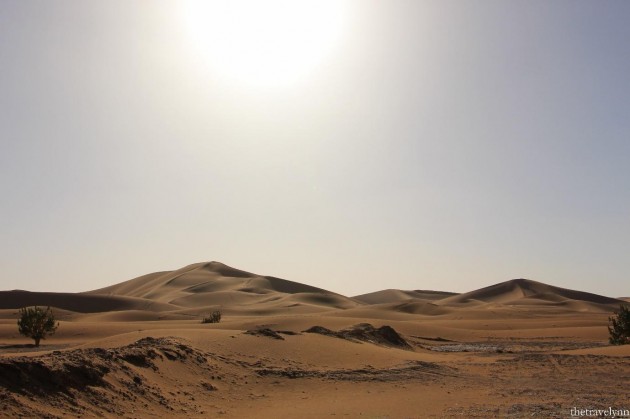 In the vastness of the desert, there is nothing but sand. No network, no internet, no distractions. It is where you can fully be present in the moment and alone with your thoughts. The landscape that greeted us was alien, nearly ethereal. Having lived in Singapore all my life, it is so odd when there is space – vast, uninterrupted space. What do you do with it? It’s an amazing feeling to just sit and watch the ebb and flow of the dunes. 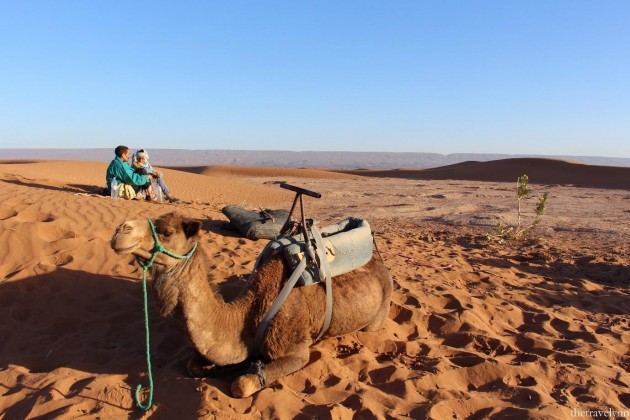 An added bonus: Camels. These one-humped friendly faces are called Dromedaries, a species of camel that inhabits Middle East and Northern Africa. Two humped camels are only found in Central Asia. 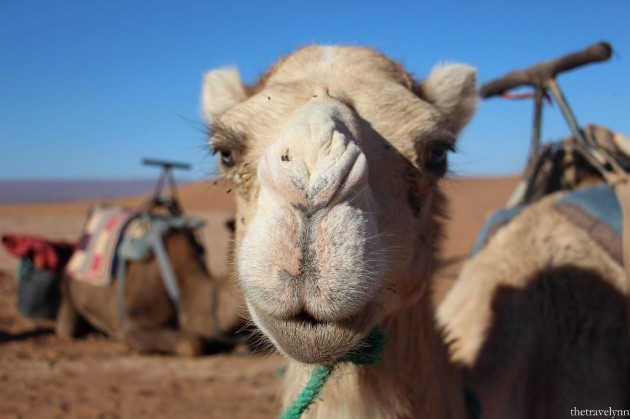 These gentle creatures are just too adorable. Most expeditions include camel trekking in their tour packages so you can ride off in the sunset with your Prince Charming. 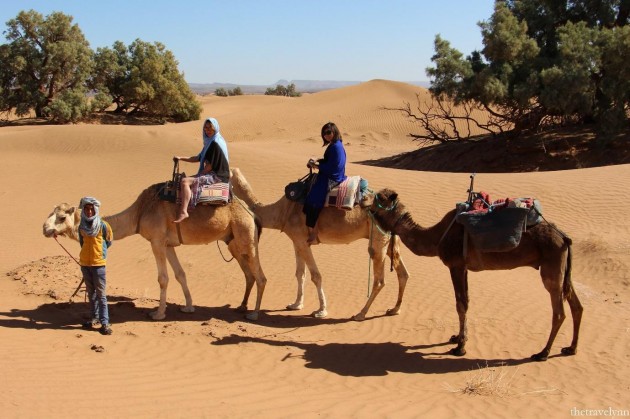 Unfortunately, my Prince Charming was nowhere to be found. Instead, I went with a friend and we rode off slightly after breakfast. Camel riding might look easy but it’s actually very difficult – and painful! I had stupidly decided that it would be a good idea to take OOTDs with the stunning Sahara backdrop and wore a maxi dress. Because sitting on the camel is so bumpy, you have to use your thighs to “kiap” (squeeze) the camels to hold on and not fall off. Imagine doing that clumsily in a maxi dress. I literally walked away (i.e. jumped off the camel and walked back to the camp) with a friction burn on my thighs. 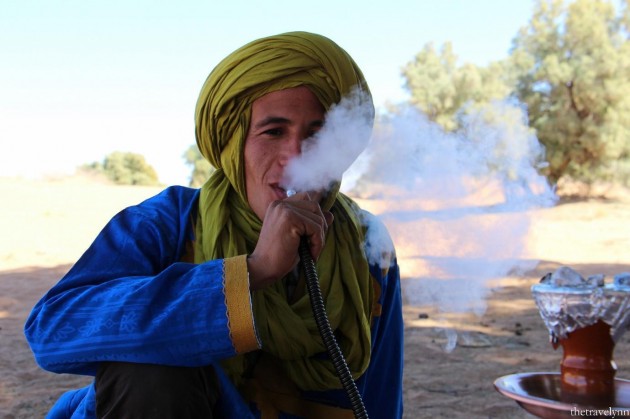 Many of the guides at the camp were also indigenous Berber people who were more than happy to share about their culture and traditions with us. Shisha – which has been recently banned in Singapore – is a part of their everyday life. 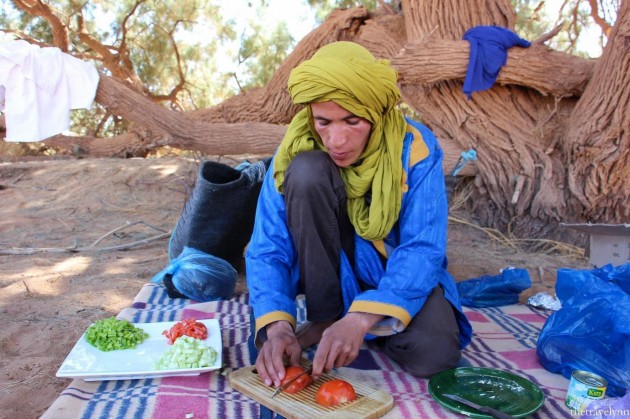 We also caught a glimpse of how the nomadic Berber still live today. While we were having lunch under the cool, cool shade of some trees, a local camel-man (not pictured, and those were the exact words our guide used to describe him) came to join us for lunch. Through badly coordinated body language and a lot of help from our guide for translation, we traded stories of how Singapore was a city with 60-storey buildings, which was unfathomable to him; and of how he had been born in the desert and living in the Sahara his whole life, which was unfathomable to us. 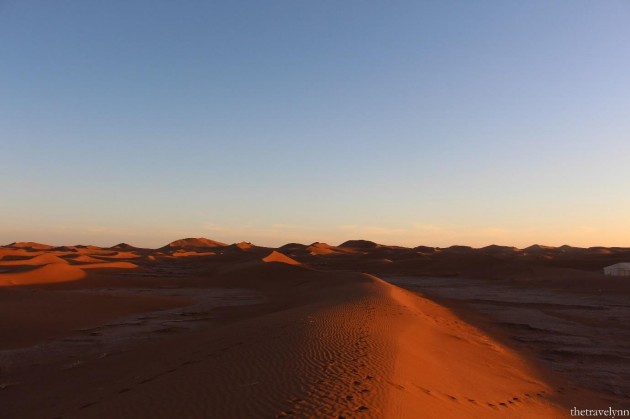 “I have always loved the desert. One sits down on a desert sand dune, sees nothing, hears nothing. Yet through the silence something throbs, and gleams…” – The Little Prince

The sunsets are not to be missed – the red glow of the sand is unbelievably therapeutic. Maybe smoke some shisha with the locals and talk about the happenings of today and just watch as a day ends. 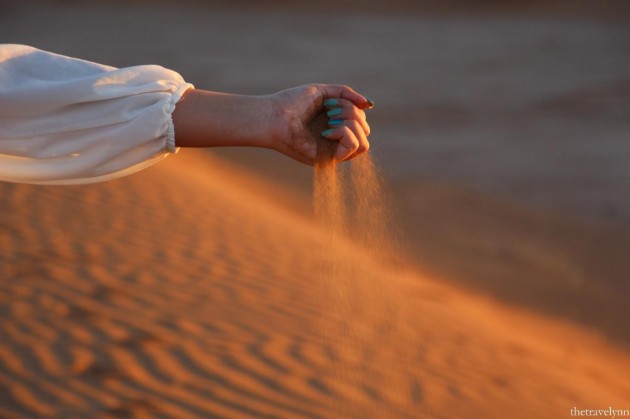 For a place with a scarcity of water, there is an irony to which how the sand mimics the flow of water. You cannot quite hold it in your hands, yet you feel it slipping. 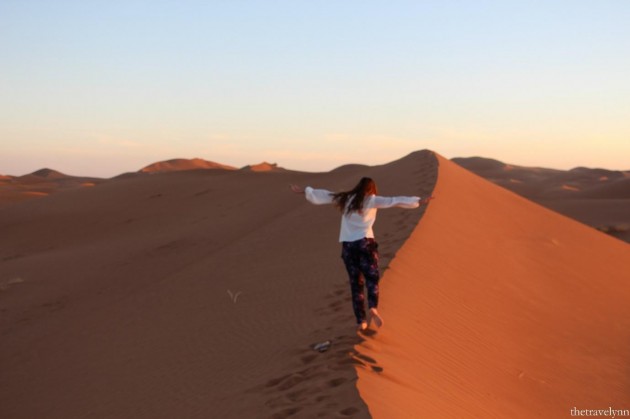 Have some fun climbing up the sand dunes, because it is way harder than it looks. 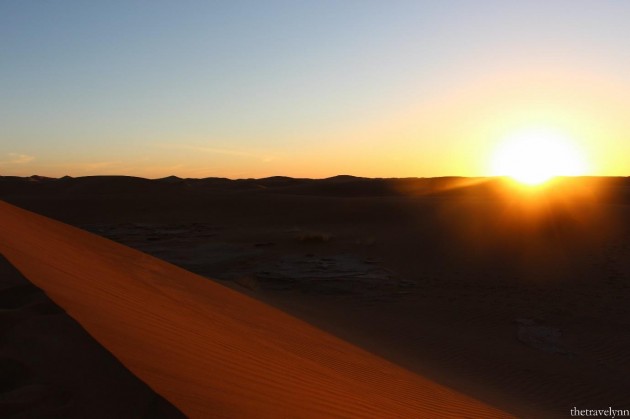 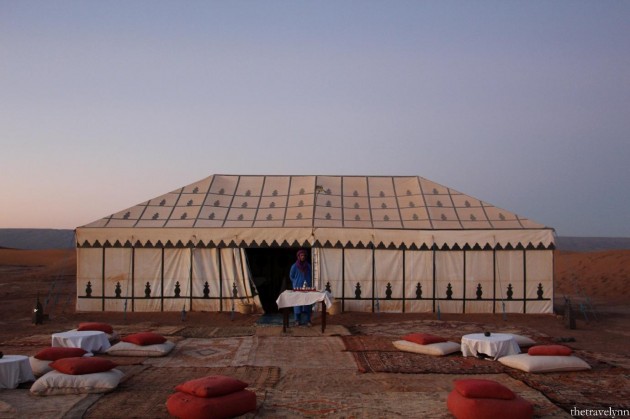 Just as you thought the most beautiful part of your experience is over, night falls. The air becomes cool (almost too cold actually, do bring a sweater), the heat of the day disperses and slowly but surely, some stars start to appear. 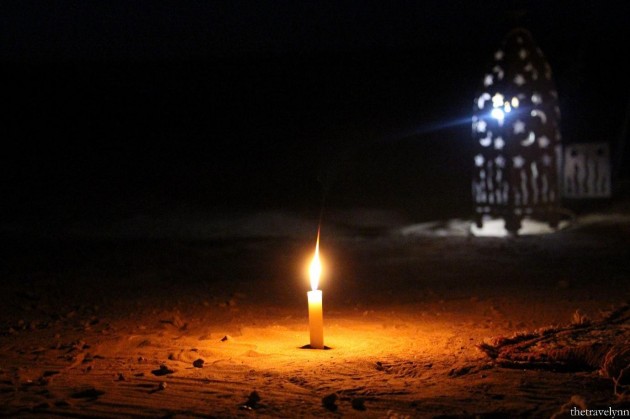 Due to the remoteness of the Sahara, the walkways are lit by candlelight, which brings a certain air of mystery I’m not complaining about. 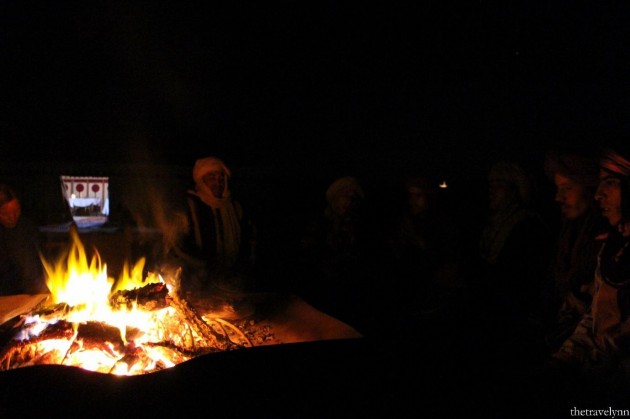 Sing songs by the campfire with the locals. 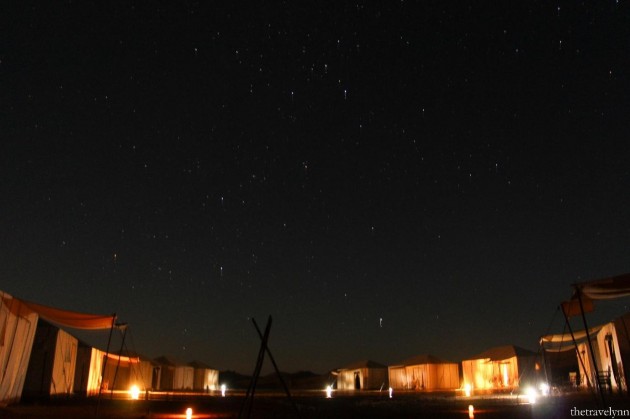 Last but not least, the starry night sky of the Sahara. Because of its low humidity, there are hardly ever any clouds. This makes the Sahara a prime spot for night sky photography. Unfortunately, I didn’t have a tripod with me at the moment so I had to improvise and took this whilst balancing the camera precariously on a chair. Bring your tripod!

Most trips to the Sahara depart from Marrakesh, Morocco. I would personally recommend spending a minimum of two nights in the desert as the journey, while entirely scenic, is rather tedious. I stayed in Erg Chigaga Luxury Camp (http://www.morocco-luxury-camps.com/) where prices start from 650 euros for two nights in the desert. Prices also include transport, 2 nights in a local hotel for an en-route stopover (one night there and one night back). The camp itself is quite comfortable, there is an en-suite bathroom equipped with hot water for showers and even a flushing toilet! Fair warning though, the water is a little briny as it comes from a nearby well. 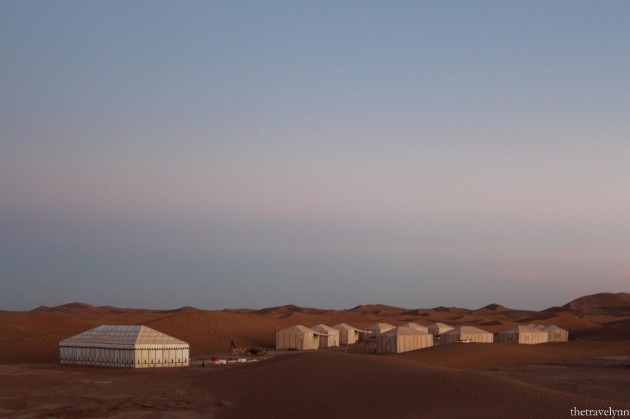 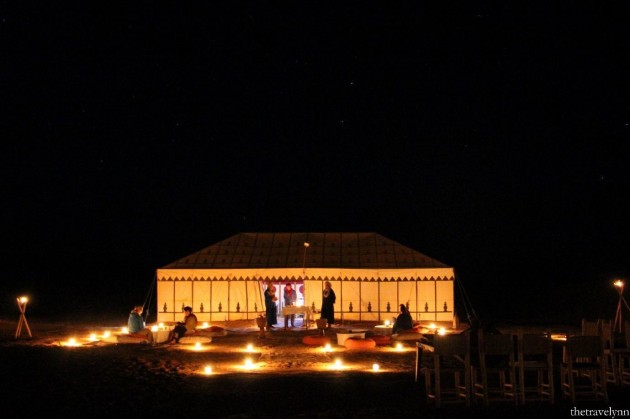 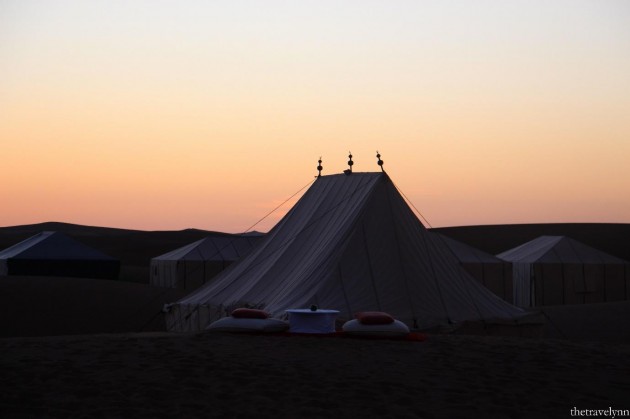 For the budget conscious, there is an option of more basic camps (http://www.morocco-desert-camp.com/). There is still hot water for showering, but the toilets are shared.

Share this article with bae to get some creative juices flowin’! Honeymoon maybe?

*All images were taken by thetravelynn.com unless stated otherwise. 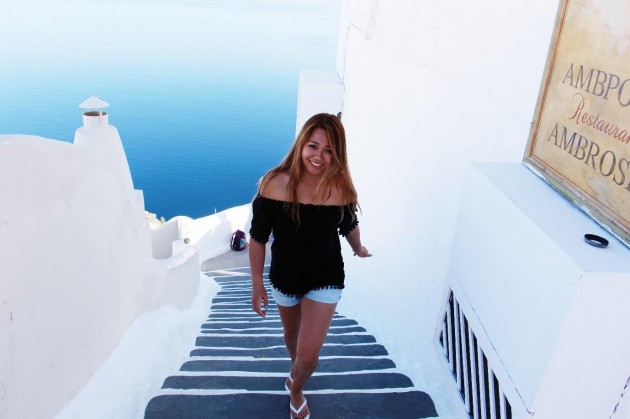 Hi, I’m Lynn and I’m an travel addict. I like shiny things (aka luxury travel), photographing animals and ticking places off my bucket-list even though I hope not to die so soon. If you liked this article, do visit my website at www.thetravelynn.com. Follow me @thetravelynn on Facebook, Twitter and Instagram!