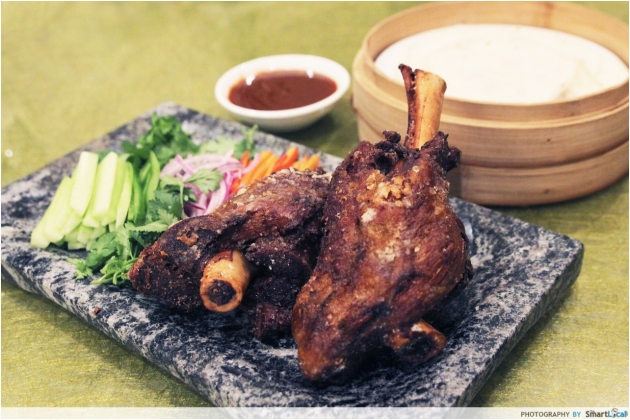 Royal Pavilion is nestled along Merchant Road, so tucked away in a corner that its touted ‘royalty’ appeared somewhat incompatible with its unassuming premises at first glance. Step through its glass doors, however, and you’ll be struck by the stunning grandeur of its interior decor.

The 142-seater restaurant practically drips with opulence, befitting its namesake – it boasts ornate crystal chandeliers and gold-cast oriental motifs that line the walls. Its contemporary interior is a blend of East and West, a nod towards Head Chef Chung Ho Shi’s ethos of serving up timeless Cantonese delicacies updated with new-world flavours.

Chef Chung is the brains behind arguably one of the most unique dim sum menus available here on our shores – think grilled siew mai skewers and baked BBQ snow buns. It comes as no surprise that the team at Royal Pavilion is striving to break from tradition once again with their 2015 Chinese New Year offerings. Take for example, the glaring omission of classic Chinese New Year dishes like Pen Cai – “all other restaurants were already doing it” – and the intriguing addition of unlikely characters like fried lamb shank! 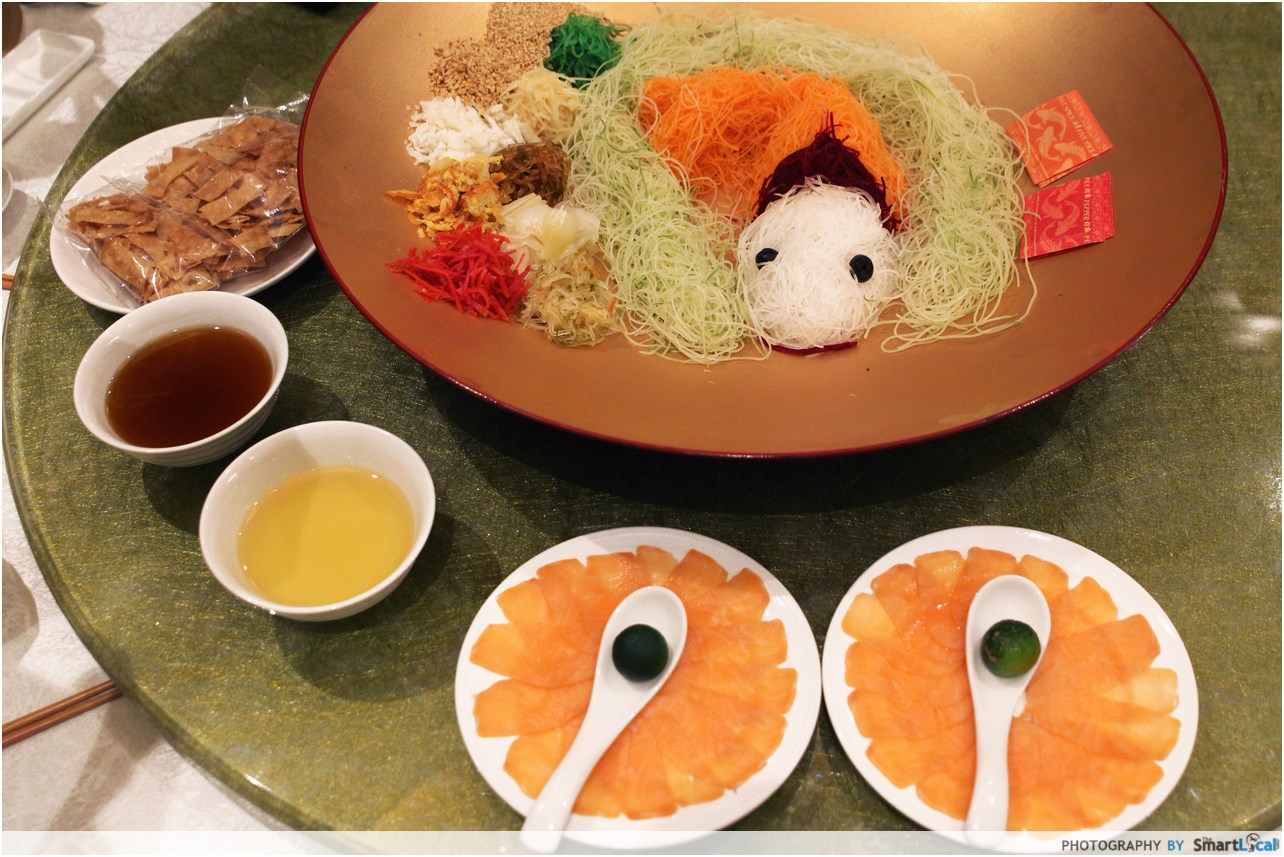 As much as Chef Chung tries to deviate from the usual CNY fare, there is one dish that cannot be done without. No prizes for guessing, it’s yusheng! In Royal Pavilion’s rendition of this classic, the main ingredients used were pretty ordinary – notwithstanding its beautiful presentation, the shredded vegetables and crackers almost seemed to out of your regular nondescript boxed yusheng, except fresher.

But what sets this yusheng apart is Royal Pavilion’s housemade apple-and-plum sauce and the featuring of several interesting condiments, such as ground pepper and olive oil. The result was a mildly sweet and fruity layer that clung onto the vegetable shreds, which was moist without being too overpowering.

They were also considerate enough to provide us with extraordinarily long pairs of chopsticks – say goodbye to getting stabbed in the rib by your boisterous relatives or ending up with mounds of yusheng all over your hands!

How many of us will pick mutton satay over chicken? Or mutton soup over mee soto? There’s a reason mutton is easily the least popular meat in Singapore – there’s always a danger that you’ll end up chewing on a distasteful, gamey piece, which is too off-putting for most.

So imagine my apprehension when I was first told lamb was on the menu. As someone who rarely eats mutton in any form, I have to say I was totally blown away by this dish. The glistening, freshly fried lamb shank made its mark from the moment the platter entered the room. Its overwhelming aroma perfumed the room and I was absolutely salivating! 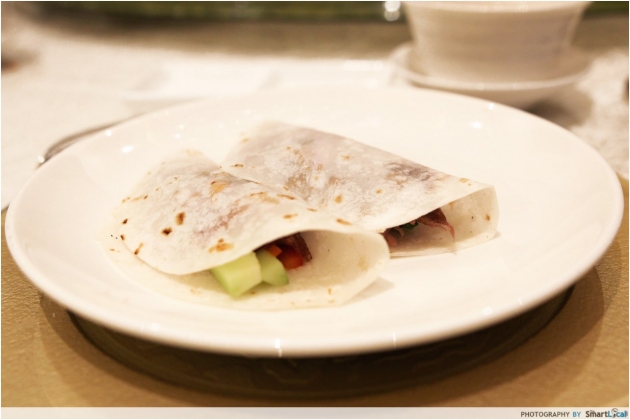 Served Peking Duck style (wrapped with onions, coriander, cucumber and slathered in sweet sauce), the crunch of its crisp skin and the very slight gameiness of the lamb shone through. This is a refreshing change from the regular Peking Duck, and certainly a unique treatment of this meat that will win over even the harshest of critics. 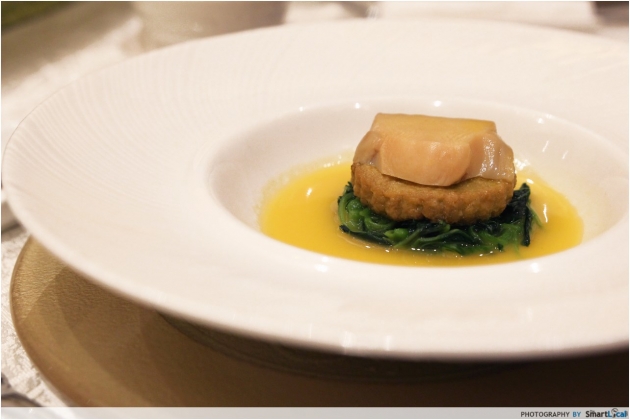 Despite it being a pumpkin broth, this collagen-enriched soup has a more intense chicken flavour than that of pumpkin. As humble as it appears, the beancurd was definitely the standout character in this dish – it was soft, silky and left me wanting more.

Overall, while the chefs were skillful enough to maintain a pleasant balance of flavours in the broth without it being too salty, I felt that the taste was watered down when paired with simple blanched spinach leaves and homemade beancurd. 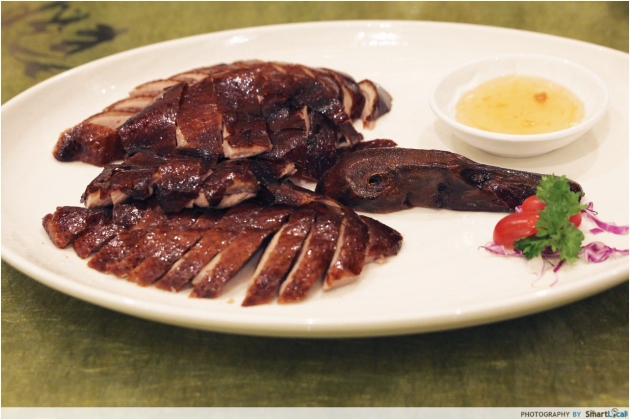 Without a doubt, this dish was the star of the night. Their Royal Smoked Duck has been making waves on the local foodie scene – in fact, it was voted one of the Top 10 Dishes by Lianhe Zaobao last year, and with good reason!

Often, my complaint with the roasted ducks is that the taste is often locked in in the crisp skin but the flesh is bland and tough in comparison. This wasn’t the case with Royal Pavilion’s smoked version! Due to the chef’s stringent selection of 3-4 month old ducks and its traditional smoking process (each duck is smoked for 45 minutes with lychee tea leaves and chipped wood), he yields uniformly smoked and perfectly tender meat, which is separated from its crisp skin by a pencil-thin layer of fat.

In addition, the smoking process lends the duck an intense and extremely palatable aftertaste reminiscent of bakwa that truly sets it apart from its more commonly offered roasted counterpart. 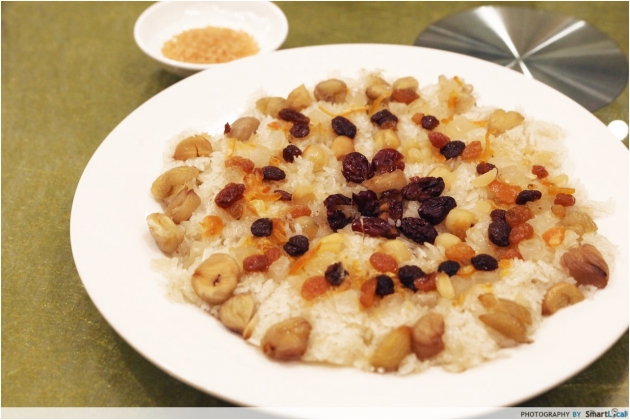 Personally, I’ve never had glutinous rice served with sweet components before, so this seemed unusual when it first landed on the table. Said to be a traditional Chinese dish, this dessert featured a scattering of chestnuts, red dates, raisins, candied winter melon, lotus seeds and orange rind atop a disc of pan-fried glutinous rice.

Unfortunately, this dish did not win me over. Perhaps it is due to the time delay between its frying process and the moment the dish was served, but as I dug into my slightly warm portion, it was tough to chew and I even ended up biting on a few morsels of dry rice grains.

I also did not like the way the candied orange peel paired with the rice – it was sweet, citrusy and starchy all at once, which didn’t appeal to me. 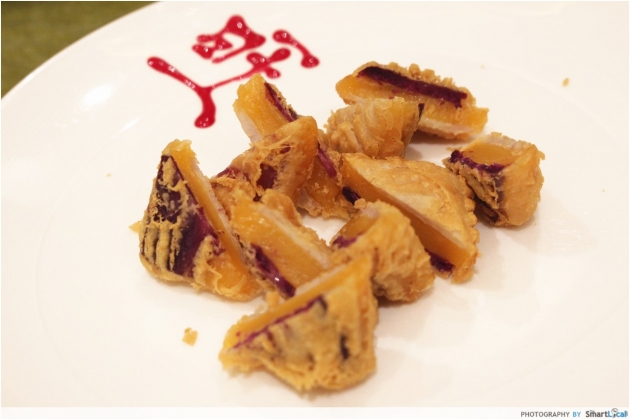 On the other hand, their Deep Fried Three Layer Glutinous Rice Cake was a winner – think soft, chewy nian gao sandwiched between pieces of naturally fragrant Japanese sweet potato and yam, fried to a crisp. The outer layer was crunchy and slightly savoury, which paired extremely well with the mild sweetness of its warm centre. Yummy. 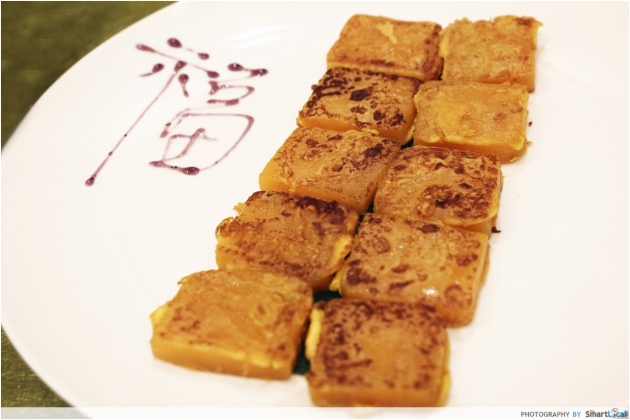 Despite its modest looks, this humble treat is far from easy to prepare in your own kitchen. In fact, I’ve attempted it before and ended up with all the most disastrous results possible: thick eggy coating, a starchy centre, and dripping with grease… Safe to say, my pan-fried nian gaos never made it to the serving platter.

Thankfully, Royal Pavilion’s rendition of this dish was wonderfully done. They managed to steer clear from the horrors of most pan-fried nian gaos, and achieved a paper thin, lightly fried egg coating that encased each sweet and chewy square.

It’s a simple, homely dessert to end a heavy meal in an upscale setting – subtly rounding out our dinner with a reminder of home and the essence of CNY itself.

Royal Pavilion boasts an swanky and elegant design, befitting of a grand occasion like CNY. Certainly, there were some hits and a few misses: I would recommend you to skip their Pan Fried Eight Treasures Glutinous Rice with Brown Sugar, but the Royal Smoked Duck is a definite must-try.

Overall, I felt that their CNY menu was thoughtfully pieced together – the Royal Pavilion team were not only able to introduce a new-world twist to classic Cantonese dishes with their inspired creations (paying homage with their fried lamb shank!), but also captured some of the most traditional elements of CNY in their dessert options.

Royal Pavilion located at the first level of Park Regis Singapore, which sits along Merchant Road. It is minutes away by foot from Clarke Quay MRT.

This post was brought to you by Royal Pavilion. 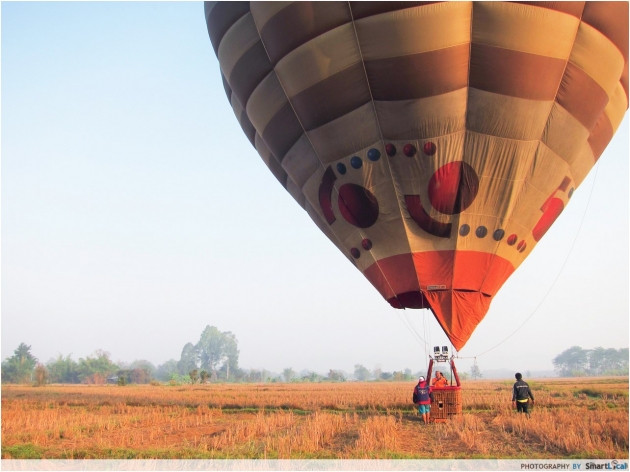 10 Unbelievable Adventures In Chiang Mai, The 'New City' Of Thailand
Ding Dong Rings in the New Year With New Cocktails - Roti Kaya, Anyone?