Bad lifestyle and eating habits that cause heartburn and indigestion

If you’re a Singaporean born and bred, your mum would’ve likely nagged at you as a growing child for something as trivial as eating dinner past 7PM or ordering supper in the dead of the night.

“Eat later your stomach pain then you know” would be what she’d say, but you didn’t know back then if that statement was fiction or fact. We hate to say it, but mum was right. Whether it’s having hotpot suppers or wolfing down lunch before a meeting, here are nine lifestyle and eating habits that cause dreaded heartburn and indigestion.

1. Lying down to relax after eating a heavy meal 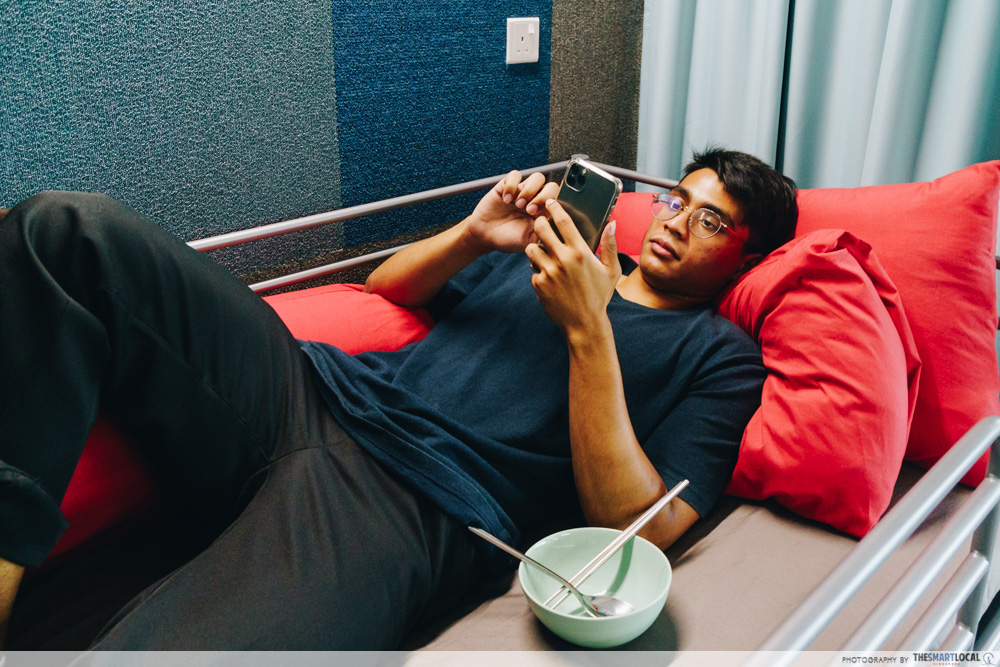 Laying in bed after a hearty meal might seem like a seemingly harmless way to nurse our burgeoning food baby. Our first instincts might be to jump in bed after a buffet, but the next time you find yourself in that sitch, don’t do it!

Lying horizontally after you’ve just eaten can cause heartburn – where your stomach’s digestive acids flow back up into your oesophagus, giving rise to that dreadful burning sensation in the diaphragm area known as heartburn. And worse, this bad habit can eventually lead to gastro-esophageal reflux disease (GERD).

Solution: Wait around 3 hours before lying down if you’ve scarfed down a big meal – this is how much time it roughly takes for your stomach to fully digest the food in it.

2. Having greasy suppers or dessert past 9PM 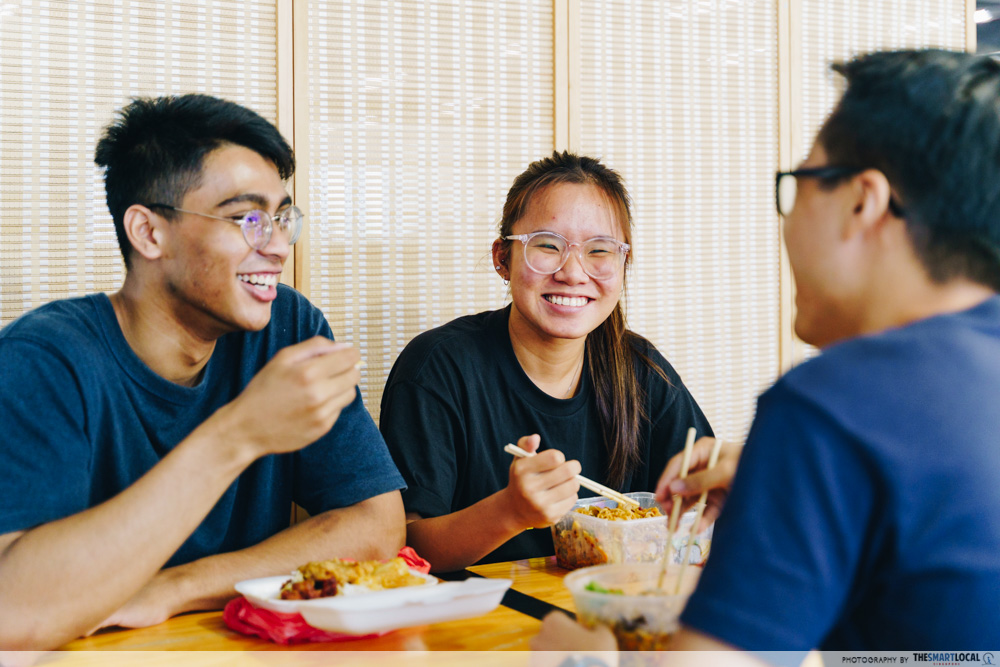 Whether it’s OTing until late, mugging for exam week, or just sobering up after an alcohol-fuelled night out, we’ve all indulged in one too heavy a meal after 7PM. While the hunger pangs that hit in the middle of the night may keep us up at night, having greasy or high-fat meals right before you hit the hay spells trouble for your digestive system.

It’s common knowledge to wait about 3 hours for food to digest before sleeping, but our metabolism slows down at night when we’re curled up in bed watching Netflix or less physically active. This means that your stomach will take an even longer time to digest the food in it, and oil-laden, fat-heavy meals will most likely result in reflux.

Solution: Skip that late-run fridge run and eat that tempting slice of chocolate cake in the morning. Or if you’re big on suppers with friends, make sure you don’t cab straight home and K.O.

3. Eating rushed lunches at your desk at work

Shovelling food into our mouths or even foregoing meals can be the norm when we’re bogged down in the mire of work. If you’re guilty as charged, remember this: fast eaters are 2.5 times more likely to contract type 2 diabetes.

Speed eating usually means minimal chewing and more swallowing, which inevitably leads to indigestion. Not only does that nauseating “food coma” feeling that comes with it effectively kill our productivity, but it makes us more vulnerable to growing obese.

Solution: Always chew any mouthful of food thoroughly to give your stomach an easier job digesting!

4. Drinking too much coffee in the morning 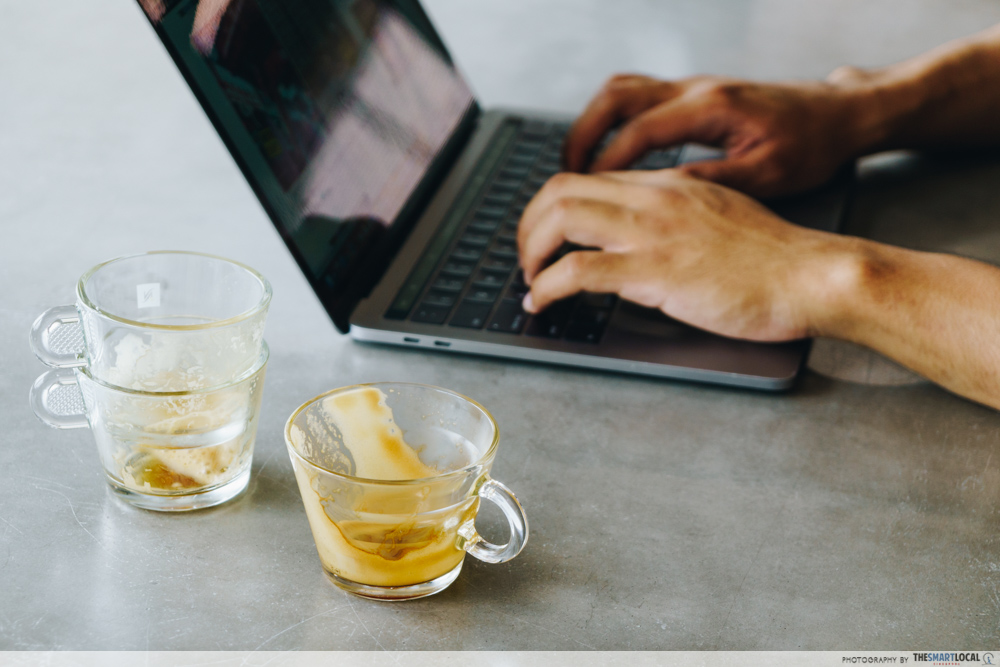 Coffee addicts, beware. The caffeine in your beloved drink is a stimulant that triggers heartburn, so consuming more than 400MG daily isn’t recommended. An 8-oz cup of black coffee contains about 90-165MG of caffeine, so drinking three or four cups in a day puts you in the danger zone.

P.S. Coffee isn’t the only bad guy, remember that drinks like our beloved bubble tea also contain 40-50MG of caffeine that could push your caffeine intake past the recommended threshold.

Solution: Limit yourself to two cups of coffee a day – and don’t go for that bubble tea after!

5. Adding chilli and tomato sauce to everything 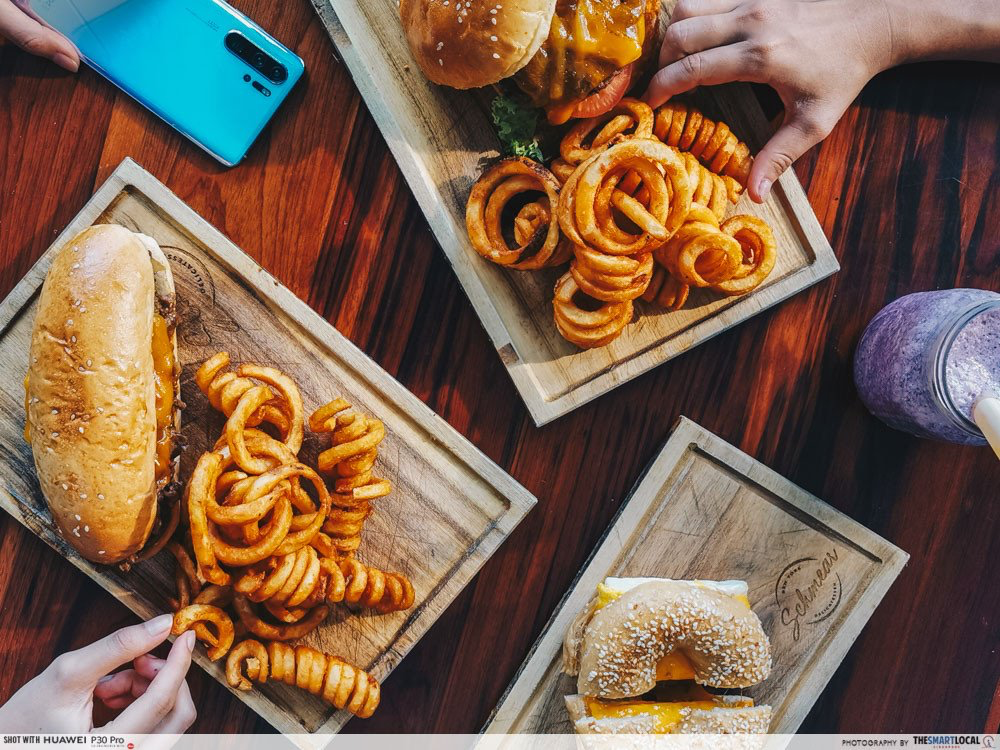 Fun fact: A greasy main, fizzy drink and fries + sauce is probably the most heartburn-inducing meal you could possibly ingest.

Slathering our food – especially good ol’ fries – with copious amounts of ketchup and chilli sauce makes it all the more palatable. But these condiments could set off a chemical fire a.k.a. heartburn in the pit of your stomach as the two don’t sit well together.

For starters, tomato-based sauces like ketchup are acidic in nature, so adding more acid to your existing stomach acid is like adding fuel to the fire that is heartburn. Spicy foods like chilli also contain capsaicin, a pesky compound that irritates your oesophagus and increases the risk of acid reflux.

Solution: Space out your fast food binges or opt for milk or water over that soda if you can’t live without burgers and fries.

6. Chugging too many alcoholic drinks during nights out 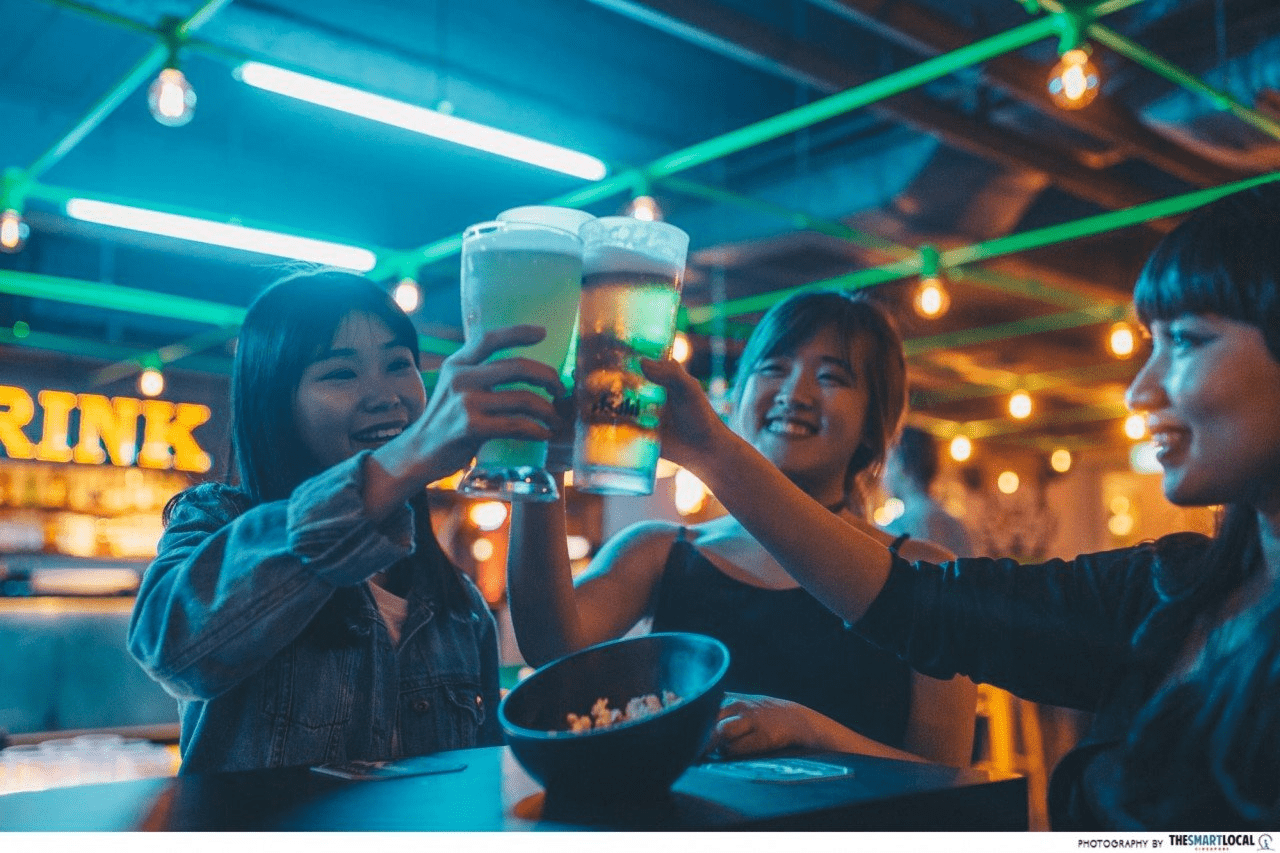 We’ve all had one too many drinks living it up at least once in our lives. While the occasional beer or cocktail is all fine and dandy, too much alcohol in our systems doesn’t just make for bad memories, but more stomach sensitivities.

Alcohol makes our stomach more sensitive to acid while forcing it to produce more acid – a dastardly duo of effects that can wreak quite a lot of havoc on your system. To make matters worse, our tipsy selves might not be able to resist the allure of some bar snacks. Mix this all together, and you have a recipe for heartburn and indigestion.

Solution: If you’re already plagued by the occasional heartburn, avoid consuming things like caffeine and spicy foods right before you throw back a couple of beers! 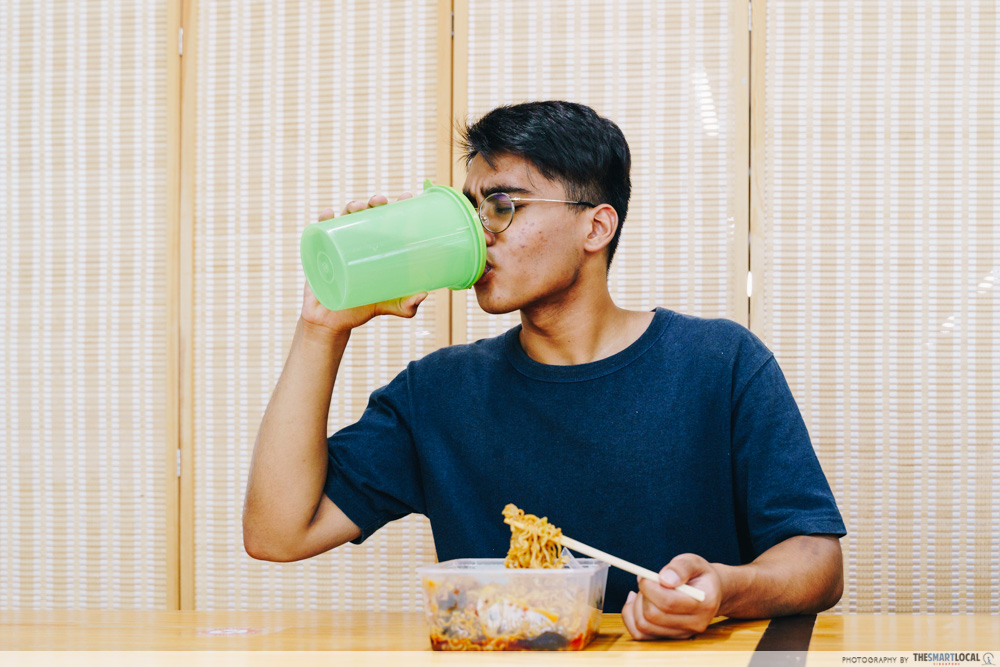 I’ll admit, my spice tolerance is absolutely horrid, so I find myself gulping down excessive amounts of water even when I’m eating mala xiao la. But alas, too much of a good thing is a bad thing, and the same applies to downing too much water.

Solution: Sip on a glass of milk to quell your burning taste buds or take measured sips over the entire course of dinner instead!

Relieve your heartburn and indigestion symptoms with Gaviscon 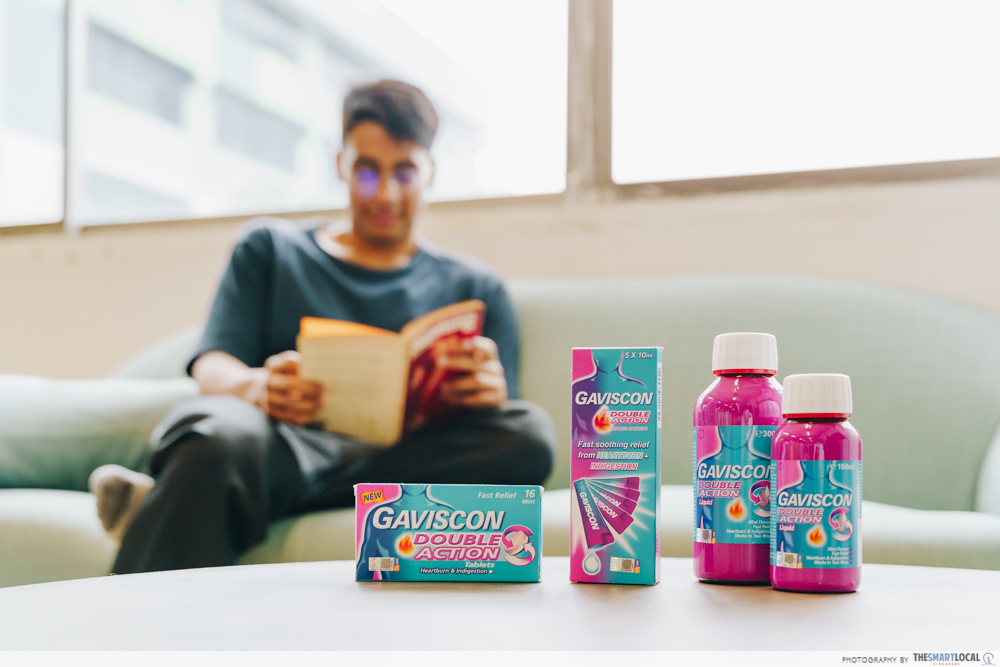 It’s safe to say this: nagging about poor eating habits is almost a national pastime for Singaporean mothers, but they are mostly always right. Don’t be guilty of these seven poor lifestyle and eating habits that can bring about heartburn, reflux and indigestion.

But for obstinate souls choosing to ignore the warnings, there’s always Gaviscon’s range of Double Action products that’ll be a fast-acting relief for our heartburn and indigestion symptoms. 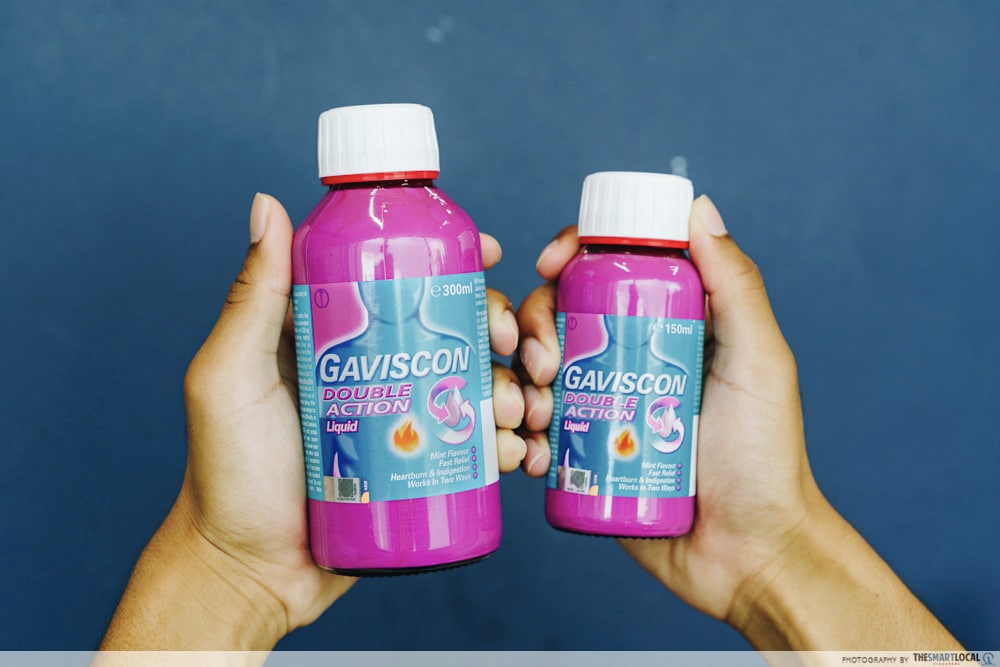 Gaviscon’s Double Action products contain sodium alginate, a compound that forms a protective barrier on top of your stomach’s contents, ensuring it won’t shoot up and cause your oesophagus burning misery.

The products also have antacids in them which neutralise excess acids, so you can say goodbye to that fiery sensation that’s been raging in the recesses of your stomach. 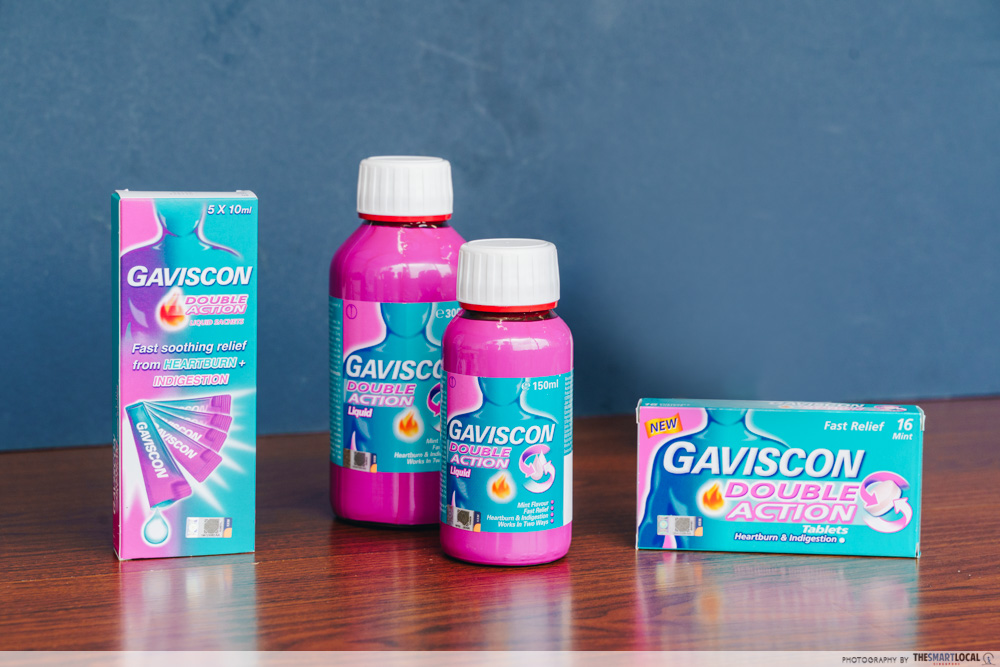 You can get your Double Action fix across all retail points with prices ranging from $9.45 – $28.35. Changing pesky lifestyle and eating habits might take awhile, but fortunately for us, we’ve got Gaviscon Double Action to put out our heartburn fires in the meantime.

This post was brought to you by Gaviscon Singapore.
Photography by Nadia Loewito. 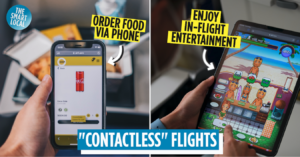 Scoot Will Soon Let You Order Food, Shop Duty-Free & Book Activities On Your Phone Inflight
TSL Quiz: What type of Christmas Shopper Are You? 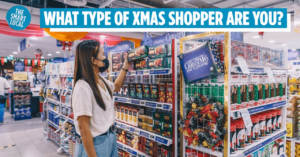