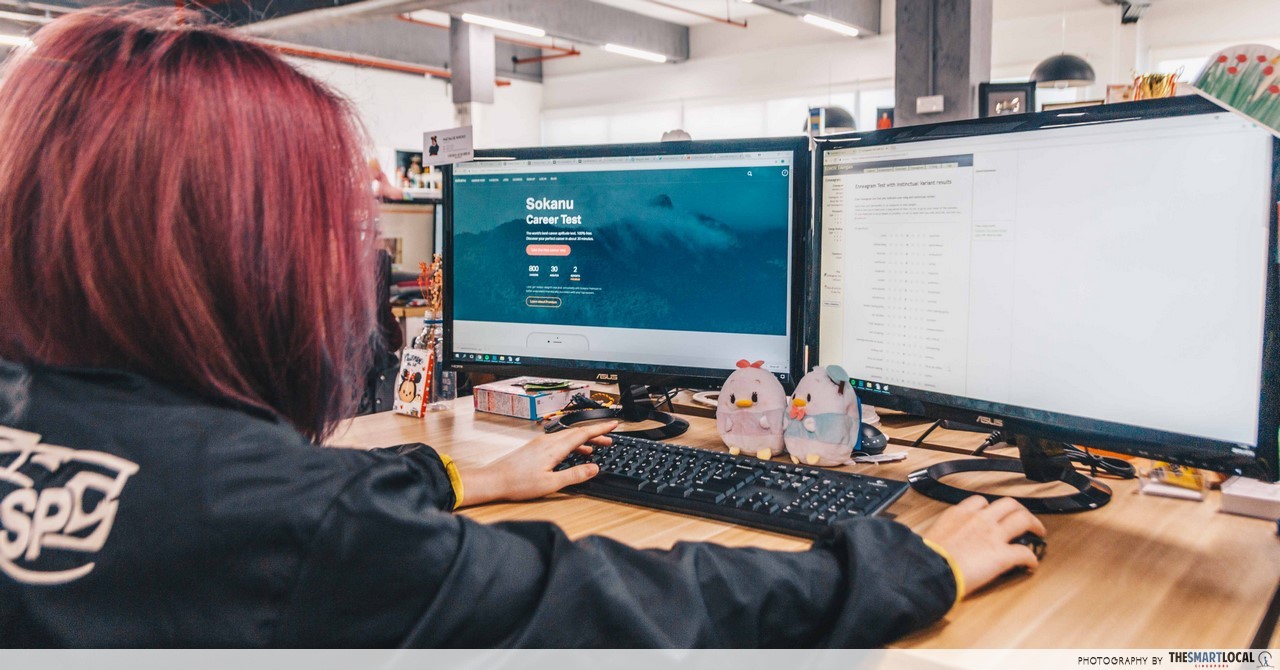 In an era where an engineering major can become a producer, the path to finding your career might not be so clear-cut. That might be why personality tests are so popular – they give an insight to one’s psyche, setting the course for their future plans.

In keeping with the zeitgeist, we asked 3 wildly-different-but-equally-confused millennials to try 6 personality tests to see if they could inch closer to finding their dream jobs.

Read till the end to find out how to gain XP for your CV, bringing you closer to your dream job!

Loves personality tests so much that any time a quiz appears on her feed, you can count on her to drop everything and spend the next half-hour finessing through the results. She dreams of opening her own bakery but for now, she just wants a job that pays a lot.

Enjoys the occasional personality test to pass some time but is a firm believer of effort. Currently suffering through her Business Management programme but that hasn’t dampened her dream of being a tai tai.

99 problems and personality tests are one of them. Currently studying law due to her strong sense of justice but really, it’s just cause she likes watching Suits. 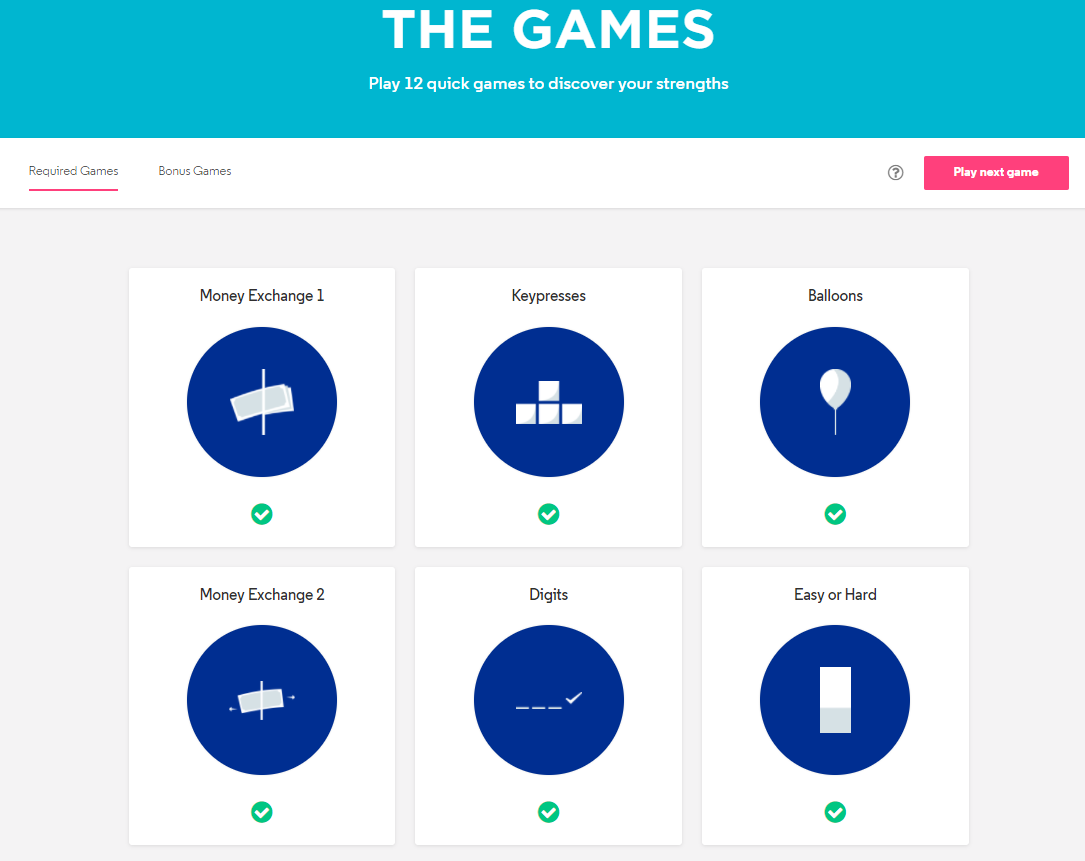 A step-up from the usual “check-the-one-that-applies-to-you” forms, Pymetrics* uses a series of simple mind games, like memory tests and tapping, to measure different cognitive and social traits; from your risk aversion level to attention span. Upon completion, you’ll get a trait report, and a list of recommended jobs.

Z: It didn’t feel like a test, so I was very relaxed. I especially liked the balloon pumping game as it showed me how much of a risk-taker I was, but I hate the job they recommended; financial advisor. (Writer’s Note: She’s horrible with money)

Iqa: The results were nothing special but I liked how my recommended job was a lawyer. 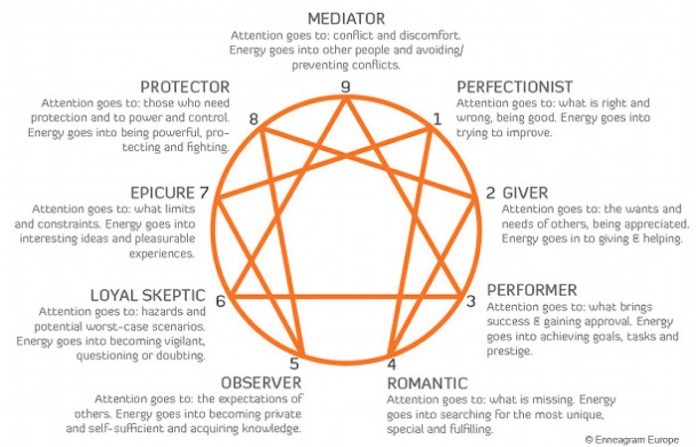 No, you won’t have to summon Satan.
Image credit: Pinterest

Despite the intimidating diagram, the Enneagram System is pretty straightforward. We all fall into 9 major personality traits; a basic personality type.

But what makes this system special is that it also tell us our underlying personality trait – the wing – which is useful as everyone’s unique in their own way.

Abi: I’m a Type 9, Wing 1  which makes me a Dreamer. I like how this test accurately pointed out my vice, stress-eating, so it’ll be good to have a low-stress job in the future. I got “teacher” under my recommended jobs which is something I wouldn’t mind doing.

Iqa: I got Type 2, Wing 3 and it says that I’m a Helper. It’s true that I enjoy helping people but I wouldn’t go so far as to say that it’s my biggest motivation in life.

You can take a free test here. 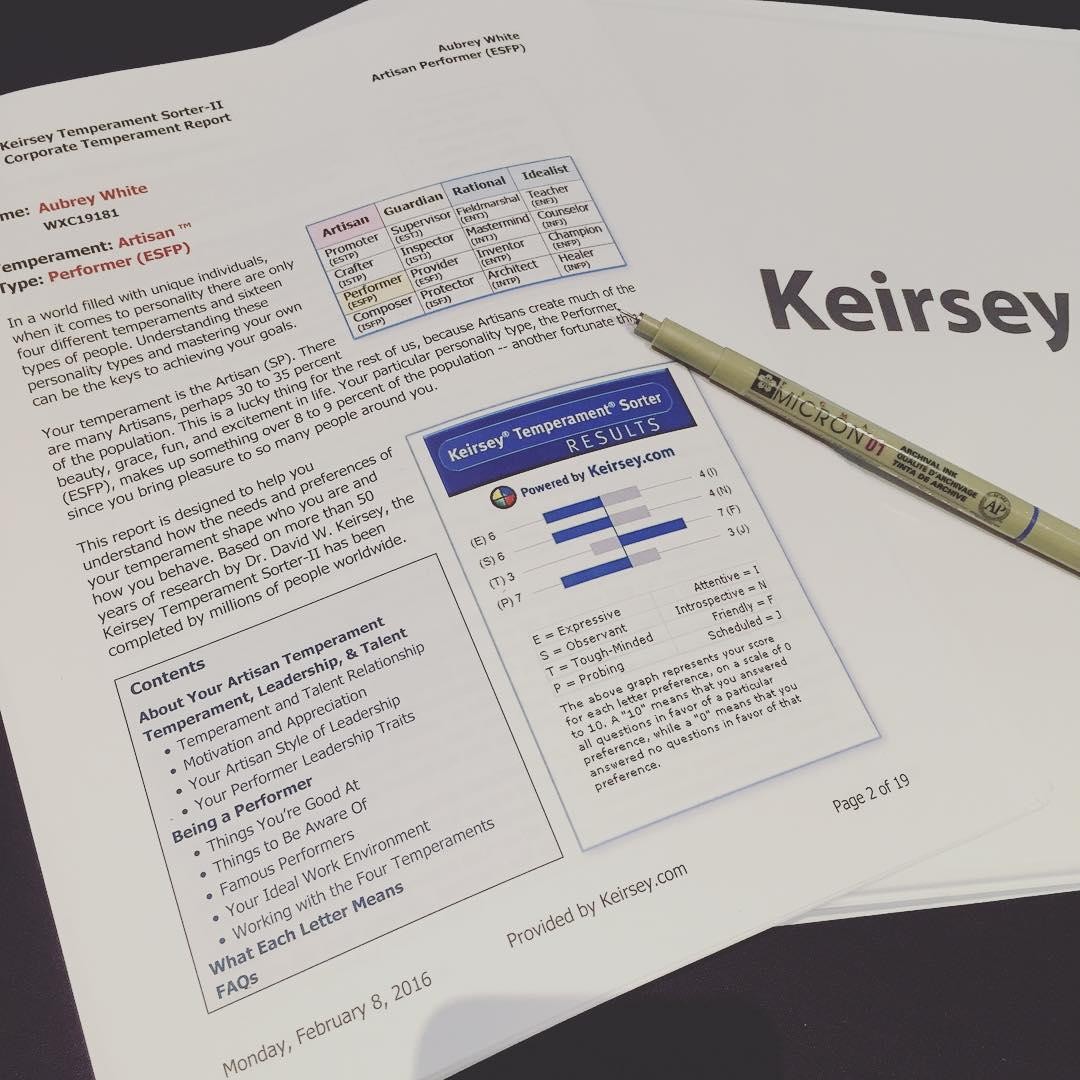 As its name implies, the Keirsey Temperament Test categorises personality into 4 different temperaments – measured by communication habits, and action patterns:

This makes it different from MBTI, which groups people according to cognitive functions like thinking, and feeling.

Z: I got Idealist which implies that I’m always trying to be the best possible version of myself, which is true! But I don’t agree with the recommended jobs – actor and social worker – as there’s too much pressure there.

Abi: Guardian! It says I have a natural talent for managing stuff and I got business director as my recommended job, which suits my degree. 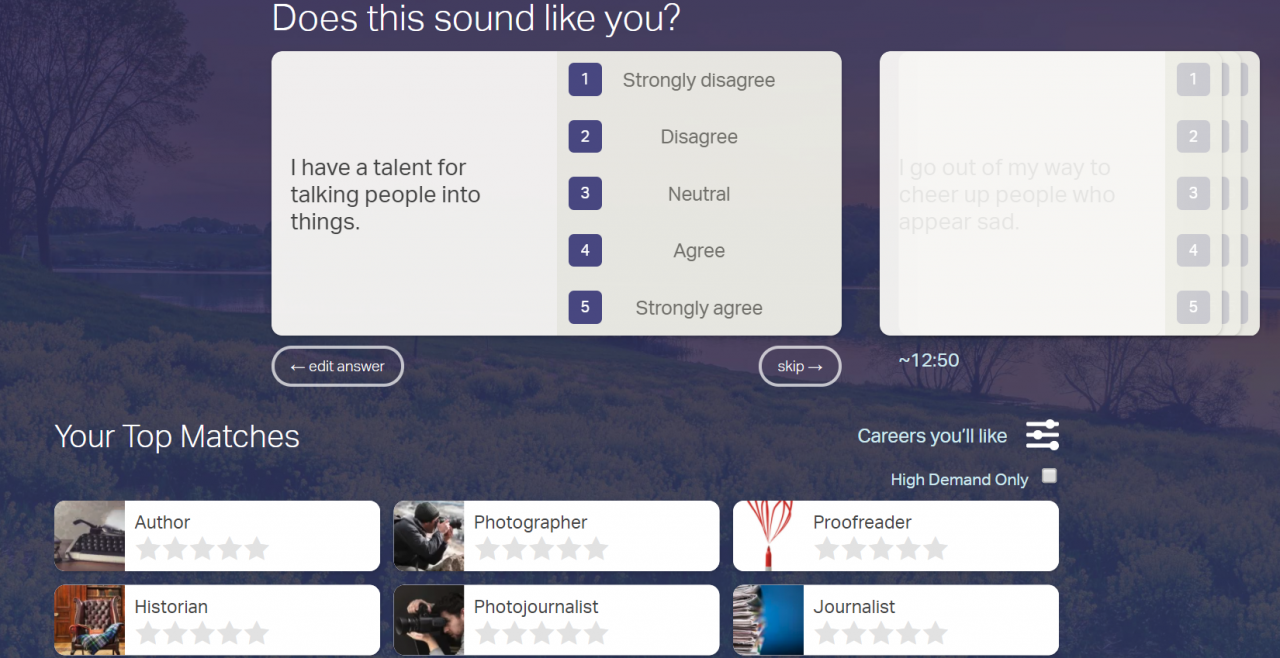 The Sokanu Career Test is comprehensive in that it questions you about a wide range of categories from job functions to education history, and systemically eliminates jobs until you’re left with the one that best suits you.

Z: I got matched with “author” and “musician”, which are jobs I’ve seriously considered doing. The personality assessment was accurate too, as it mentioned that I thrive when I express my creativity.

Abi: Says here that I should be a psychologist which is kinda dangerous since I’ve never studied it. But I do like the interface of the test as you get to save your progress, and continue at a later time; something the other tests don’t have.

Unlike the other tests in this article, the Interpersonal Skills Self-Assessment doesn’t give you a list of recommended jobs after you’re done. Instead, it’ll score you based on soft skills like group communication, and emotional intelligence – areas which are usually blind-spots to us. 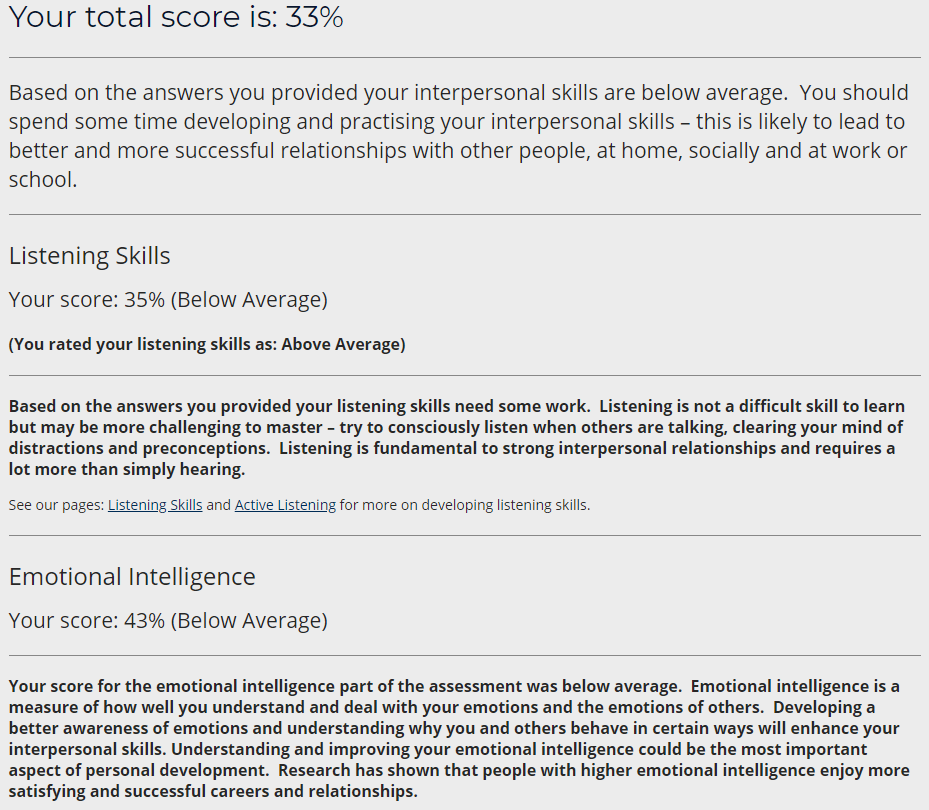 Z: Rabak sia. I got 33% which means I’m way below average. Then again, I’m extremely shy so my scores kinda make sense. I can probably work on my communication skills. That, or just find a job where I don’t have to talk to people.

Abi: My total score is 71% which means I have above average interpersonal skills. But I guess, it’s something I’ve had the opportunity to develop due to the nature of my course and school. 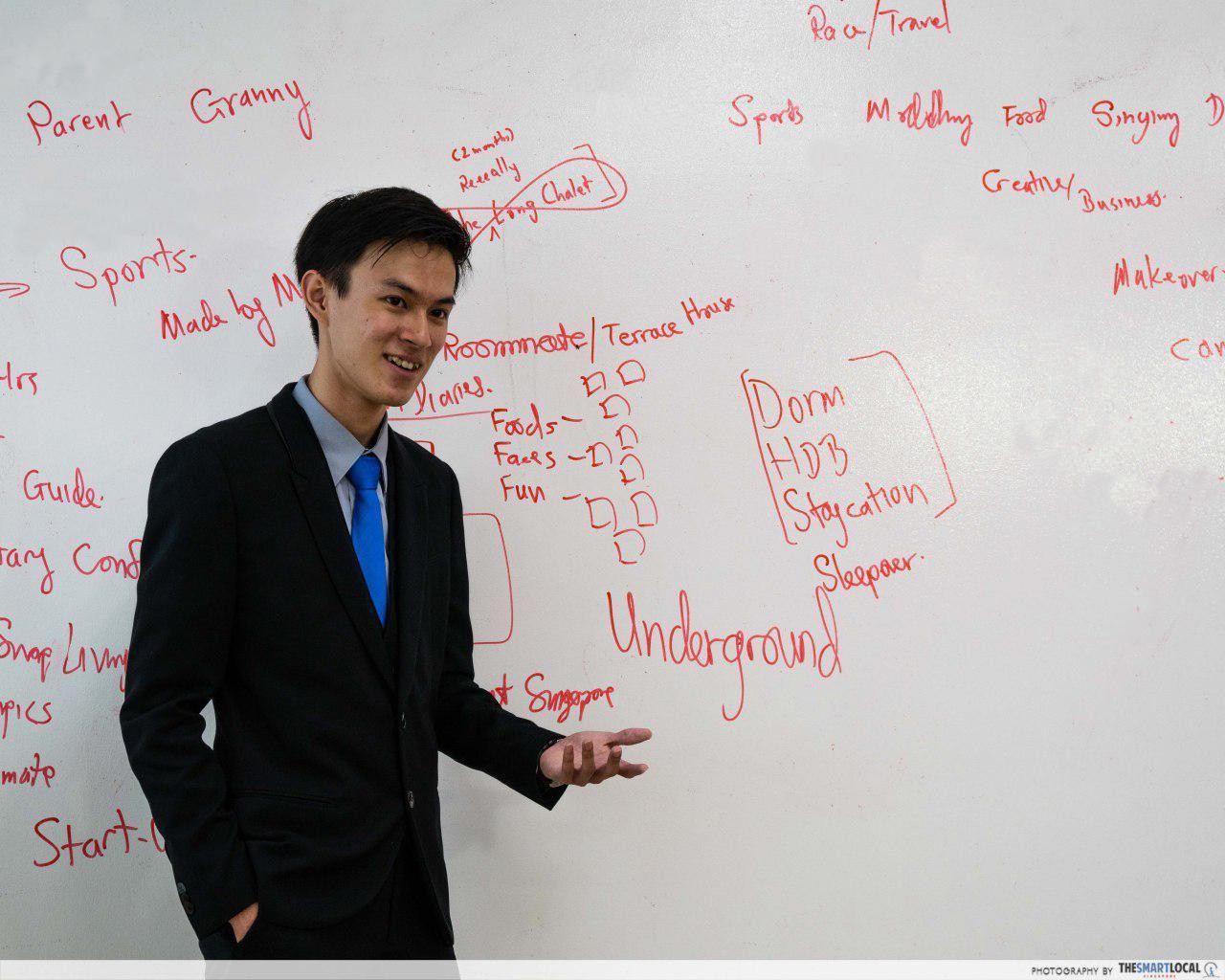 The Motivational Appraisal Personal Potential career test (MAPP) shows you an overall idea of your career motivations such as tasks you rather perform, and how you interact with people. After that, it’ll list out the top 10 vocational areas for you like training, entertainment, and legal.

The test has 71 questions and for each one, all you gotta do is to choose the options you agree and disagree with the most.

Z: I like how this test gives you the lengthiest assessment and even shows you how you’ll progress in each job sector. Mine says that I’ll work well in a job that lets me try out new things constantly which is generally my motto in life.

Discover your goals with career tests

Personality tests are just step 1 in the race to find your calling in life. What’s important is having a clear goal in mind so that you’ll at least know where you’re running towards. Once you’ve reached the end goal, having found your place in the world, don’t forget to pass on these personality tests to any other confused millennials you see out there!

Embark on your career path with Startup Talent Factory 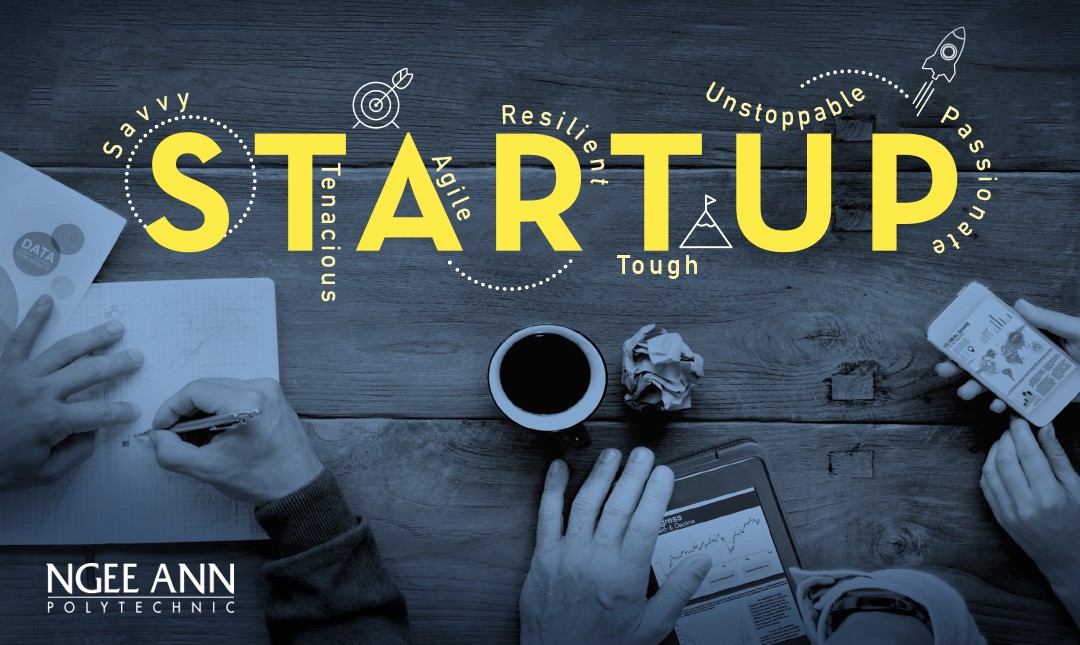 If you’re looking to go beyond just taking personality tests, having some time to master new skills in various industries might just help you figure things out. If you’re raring to go, check out Startup Talent Factory – an initiative that lets polytechnic grads experience what it’s like to work in a startup for a year while studying and picking up skills such as Digital Marketing, User Experience Design or Business Development .

A breath of fresh air from traditional companies,  the dynamic nature of startups lets employees try various roles, without being restricted by their academic background. Candidates can look forward to gaining XP points from companies such as ShopBack and e27, for 9-12 months.

What’s great about this programme is that  you will receive a recommended $2,500/month salary and the company you’re assigned to will pay for your course fees so you can focus on gaining dem skillz without worrying about any debt looming over your head.

This post was brought to you by Ngee Ann Polytechnic.