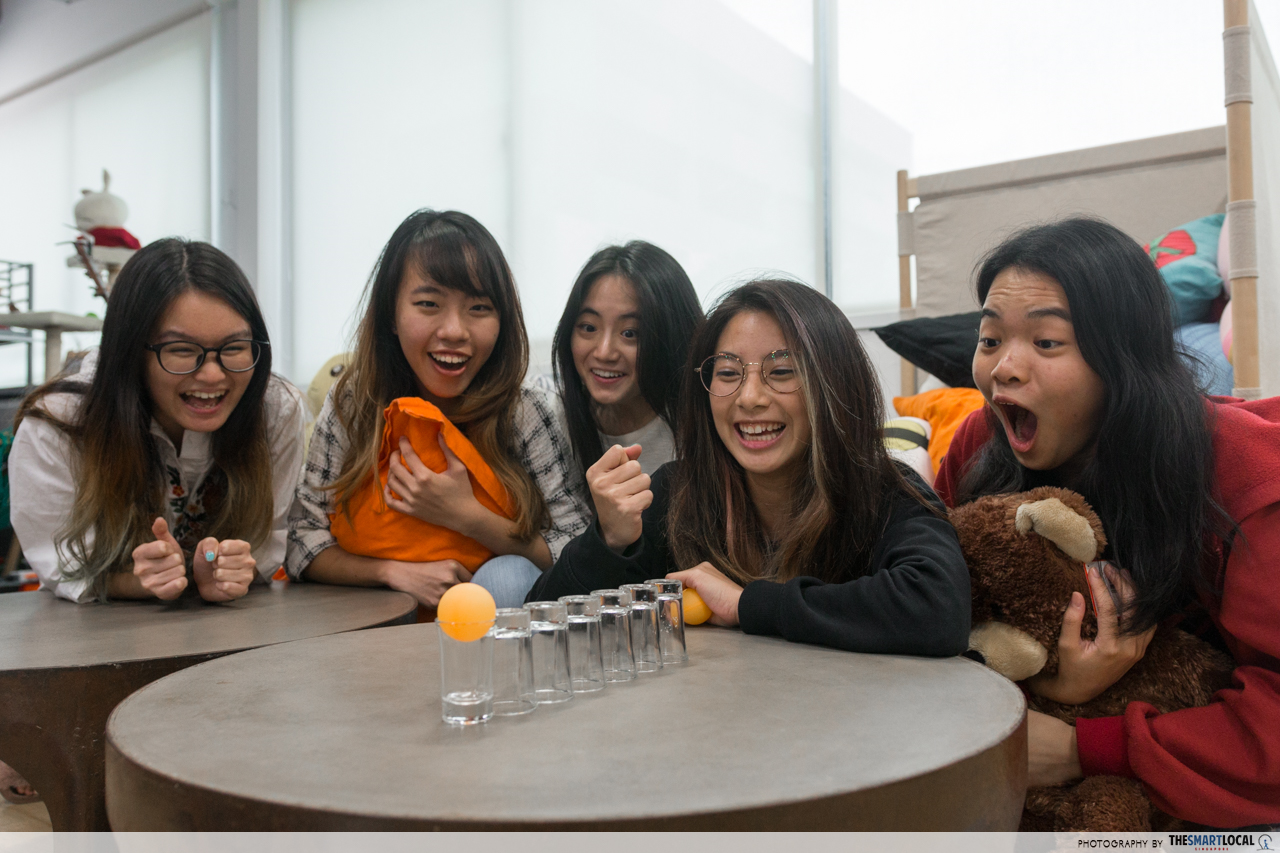 During Chinese New Year, it’s standard practice to meet up with friends and extended relatives that we haven’t met in ages. Chit chat and small talk can be a painful process, so a little icebreakers always help to make way for easier and less awkward conversations.

Here are 7 fun party games you can play without cards at your reunion dinner to bond with family or friends and make space for more ang bao!

“Titanic” may seem purely luck-based, but it also depends on the risk you’re willing to take to win! This Korean game is fun for those of you who love to sabo your friends, as you can choose how much “danger” you’d like to put the next person in.

For this fun ice breaker, you’ll need a shot glass, a beer glass, soda, and a weird mixer – such as coffee!

Minimum no. of players: 5

1. Place an empty shot glass into a beer glass filled with soda.
2. Take turns pouring small amounts of the mixer into the shot glass.
3. The person who causes the shot glass to sink must drink the concoction!

Hint: If you’re the first few in line, take a risk by pouring more liquid into the glass and hope that it sinks before the first round ends! 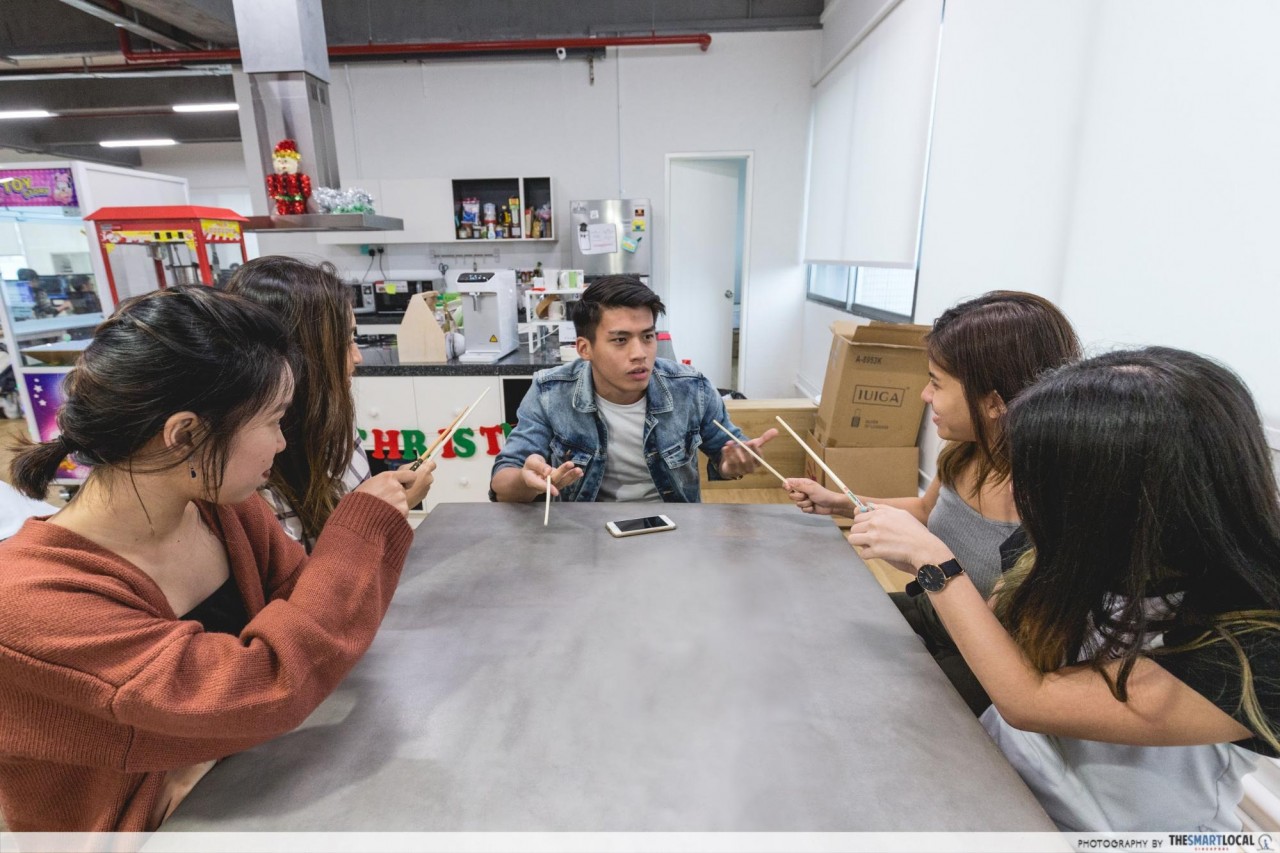 “Chopsticks” is a great party game to play after tuan yuan (reunion dinner) when the food coma is settling in and everyone is just sitting around the table. The game is similar to “Never Have I Ever”, but instead of describing a situation you’ve experienced, you make a statement or imagine a scenario that best fits someone in the group.

All you need is a pair of chopsticks, or a fork/spoon.

Minimum no. of players: 5

1. Start with someone making a statement of “someone who’s most likely to…”
2. Other players must select who at the table best fits this description (e.g. “most likely to eat the most pineapple tarts”) and point to him or her with their chopsticks.
3. The person with the most votes will get a flick on the forehead! 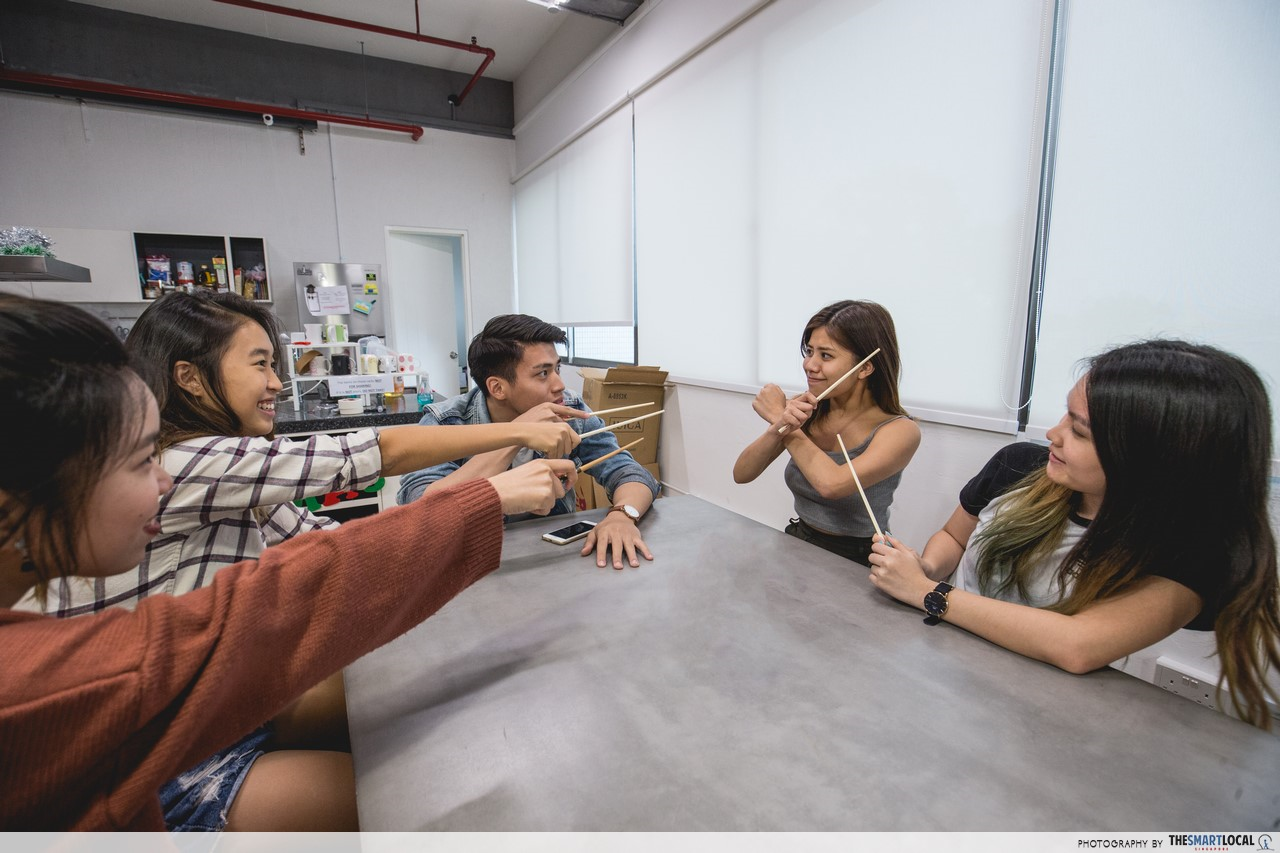 You may have heard of Flip Cup – a popular party game where players drink from a cup before flicking it. “Dynamite” is a good game to play in big groups, and all you’ll need are 2 plastic cups and decent cup-flipping skills.

1. Two people on the opposite ends of the table will start by flipping a cup each
2. Once someone successfully flips a cup, they can pass it on to the next person

3. The aim of the game is to pass your cup to the next person as quickly as possible, in order to avoid “owning” two cups at the same time.

Hint: To make your cup more “flippable”, place it so that a quarter of its base is off the table!

Pabo means “fool” in Korean, and losing this game will definitely make you feel like one. There’s only one rule to the Pabo Game, which is that the number on your hand cannot match the one you say. This game requires some mental power, so keep your eyes peeled and stay focused!

1. The first person starts by saying a number from 1 to 5, and shows a different number in his or her hand.
2. The next player must say the number shown by the previous player, while saying a different number.
3. This continues until someone messes up!

Unless you collect ang bao packets, most of us usually take the money inside it and throw the packet away. Yank Me will give you a reason to hold onto your red packets especially the larger ones, because size does matter in this game! So don’t worry if you only received $10 – consider yourself a winner if you’ve got the biggest packet.

The hybrid child of Tic Tac Toe, Ping Tac Toe is a dynamic and entertaining game for both players and the audience. While you can’t erase your opponent’s mark in the pen and paper version of Tic Tac Toe, this game allows you to bounce your opponents ball off a cup – if you manage to aim correctly, of course! For this game, you’ll need plastic cups and ping pong balls in two different colours.

Get Forked has extremely simple mechanics, but is a challenging game that requires good aiming skills and a steady hand. All you need to do is roll a coin and get it caught in a fork. If that’s too simple for you, simply increase the distance between the starting point and the fork – it’ll start to become almost impossible at 15 feet!

1. Place a fork 10 feet away from the starting point.
2. To score, players must roll a coin so that it lands between the prongs of the fork.

Hint: To increase your chances of scoring a goal, prepare your starting position by placing two fingers on both sides of the coin to stabilise it. When you’re ready, use your index finger from another hand and slide the coin to get it rolling!

Another great bonding game for big families and large group of friends, Ping Pong Race requires you to blow a ping pong ball across a row of glasses and into a final glass. The game is already challenging enough on its own, but you can add on to the challenge by using smaller glasses or making a longer row of glasses.

1. Split players into 2 teams of 5.
2. Line 5 cups in a row in front of each team, with all except the last cup being placed upside down.
3. Every player must blow a ping pong ball across the cups and into the final cup. Those who fail must keep trying until they succeed.
4. The team with all successful attempts win! 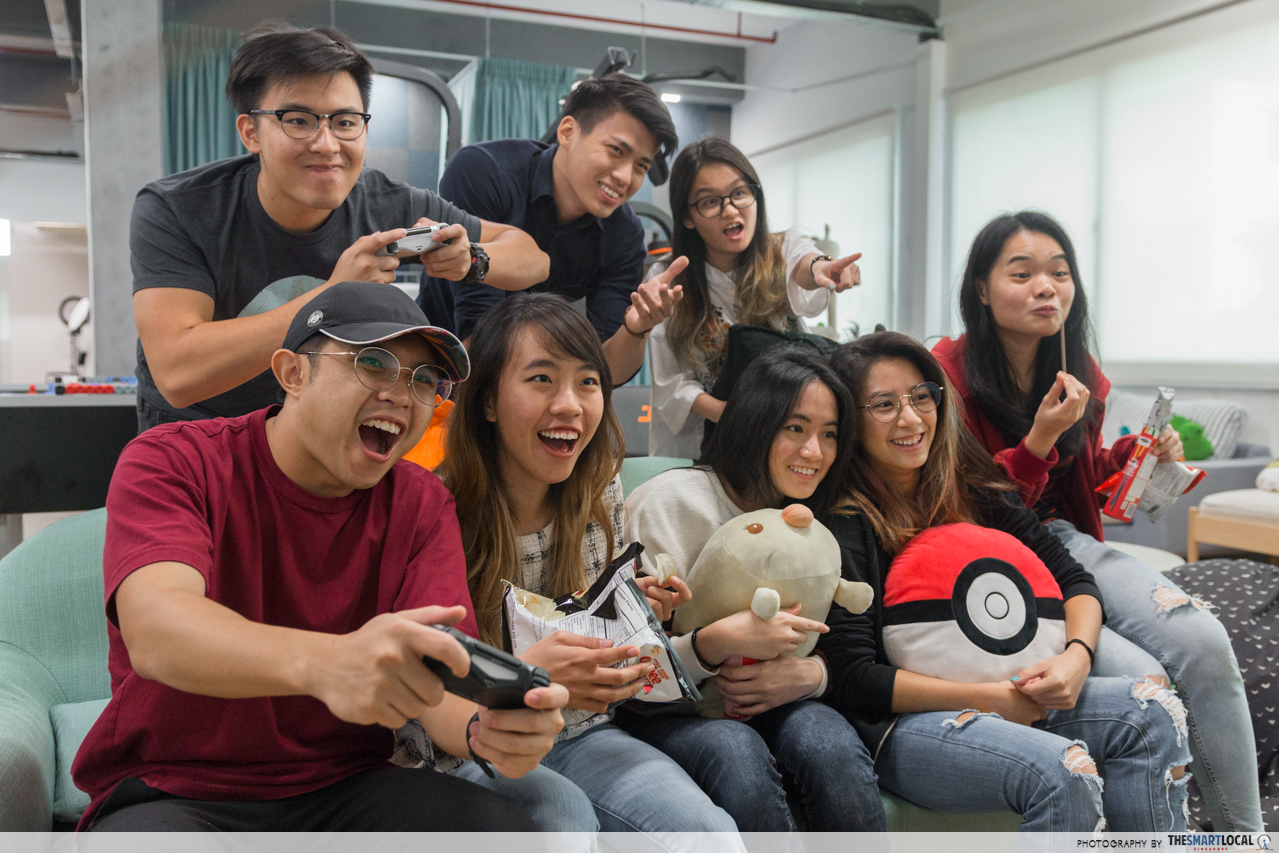 Chinese New Year happens only once a year, and it’s a special time for family and friends to catch up over food, conversations and drinks. Instead of the usual mahjong or taiti, try these new party games to add more life into your festive gatherings!

Quirky Mahjong Sets Found In Singapore To Up Your Huat This CNY
BuyAndShip's Shipping Calculator Will Help You Save Money When Buying From US, Japan and Korea...