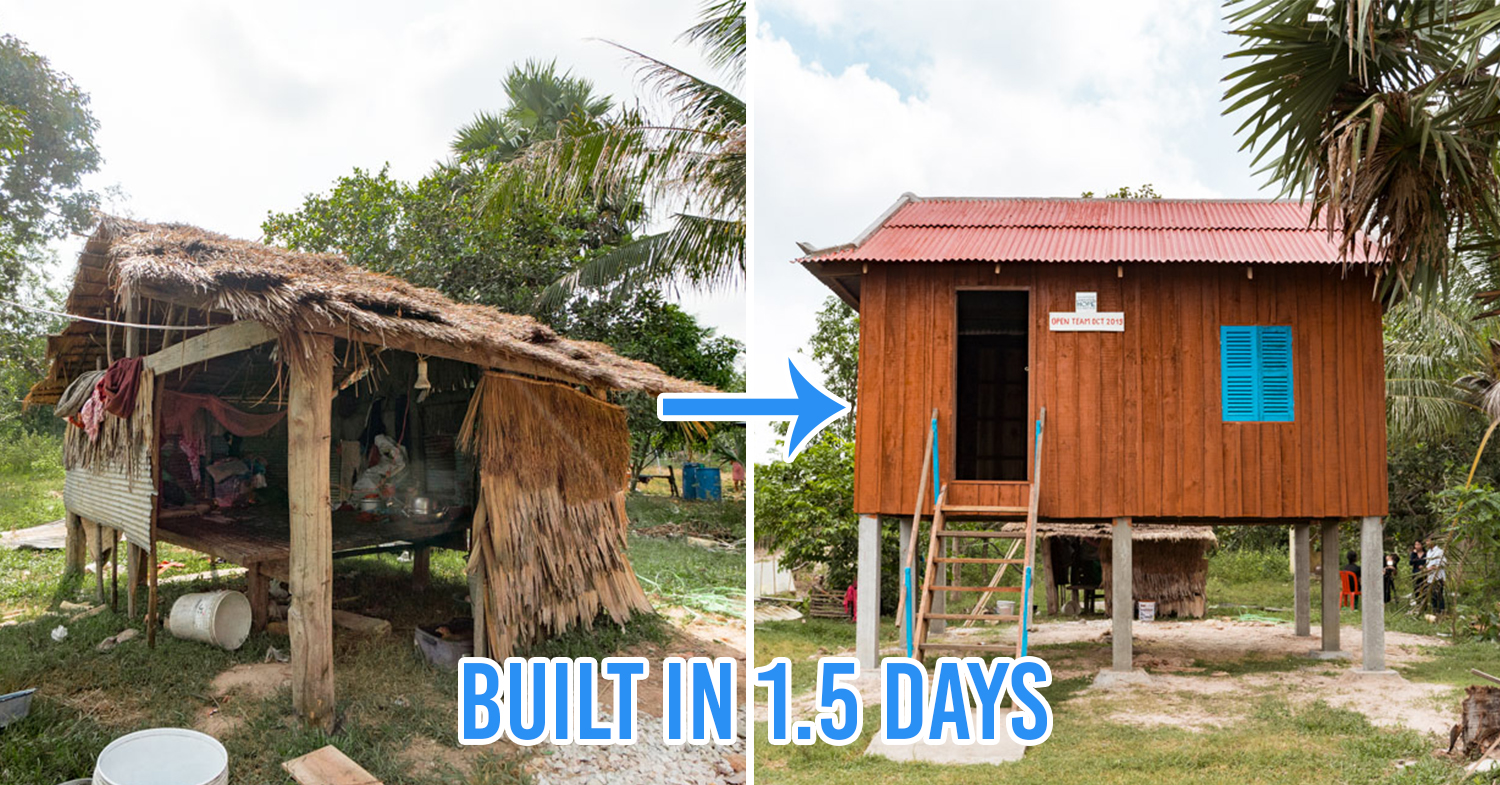 I’ve always loved being involved in community involvement programmes (CIP). Some of my most memorable ones involved visiting rural villages in Lijiang, and volunteering at the Institute of Mental Health for about a year and a half.

But thus far, these programmes mainly involved interpersonal interactions. I’ve never tried something more physically intensive, and that included building houses. So when I was given the chance to join Operation Hope Foundation (OHF) on a house-building trip to Cambodia, I jumped at the chance.

If this is something you’ve always wanted to try, here’s a breakdown of everything you need to know from accommodation to the house-building process itself.

Preparations for the volunteering programme

Before packing, I dropped by their office in Tanglin for a pre-trip briefing, where, apart from meeting the other volunteers, we were also given a rundown of the entire programme along with tips on what to expect. 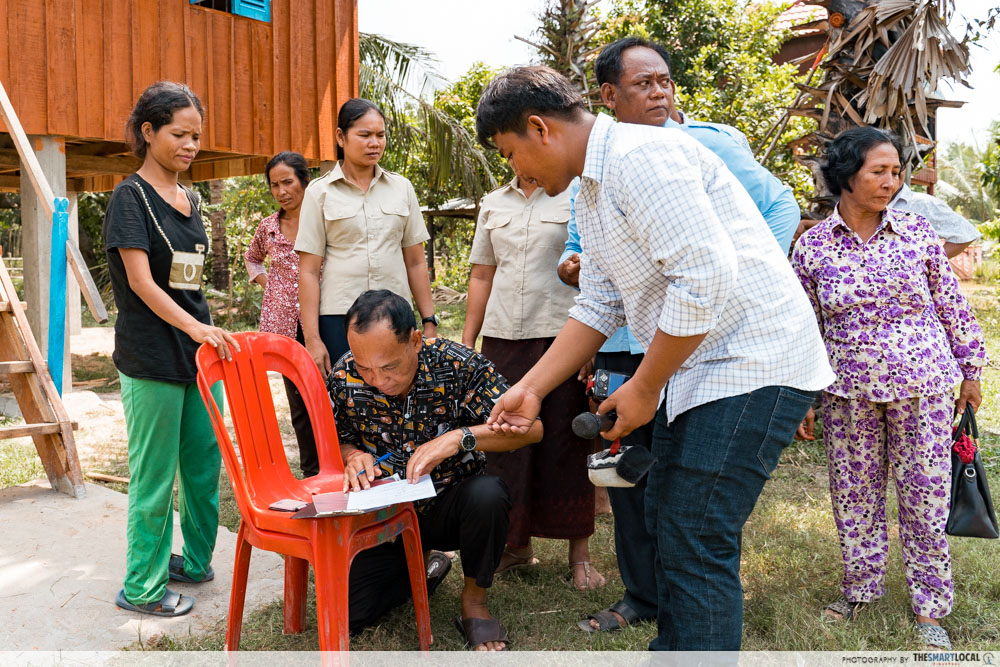 We were told to expect a hot and humid climate similar to Singapore’s. But despite that, Cambodians remain clad in t-shirts and knee-to ankle-length pants as they’re a pretty conservative bunch. Because of that, we were advised to dress similarly. 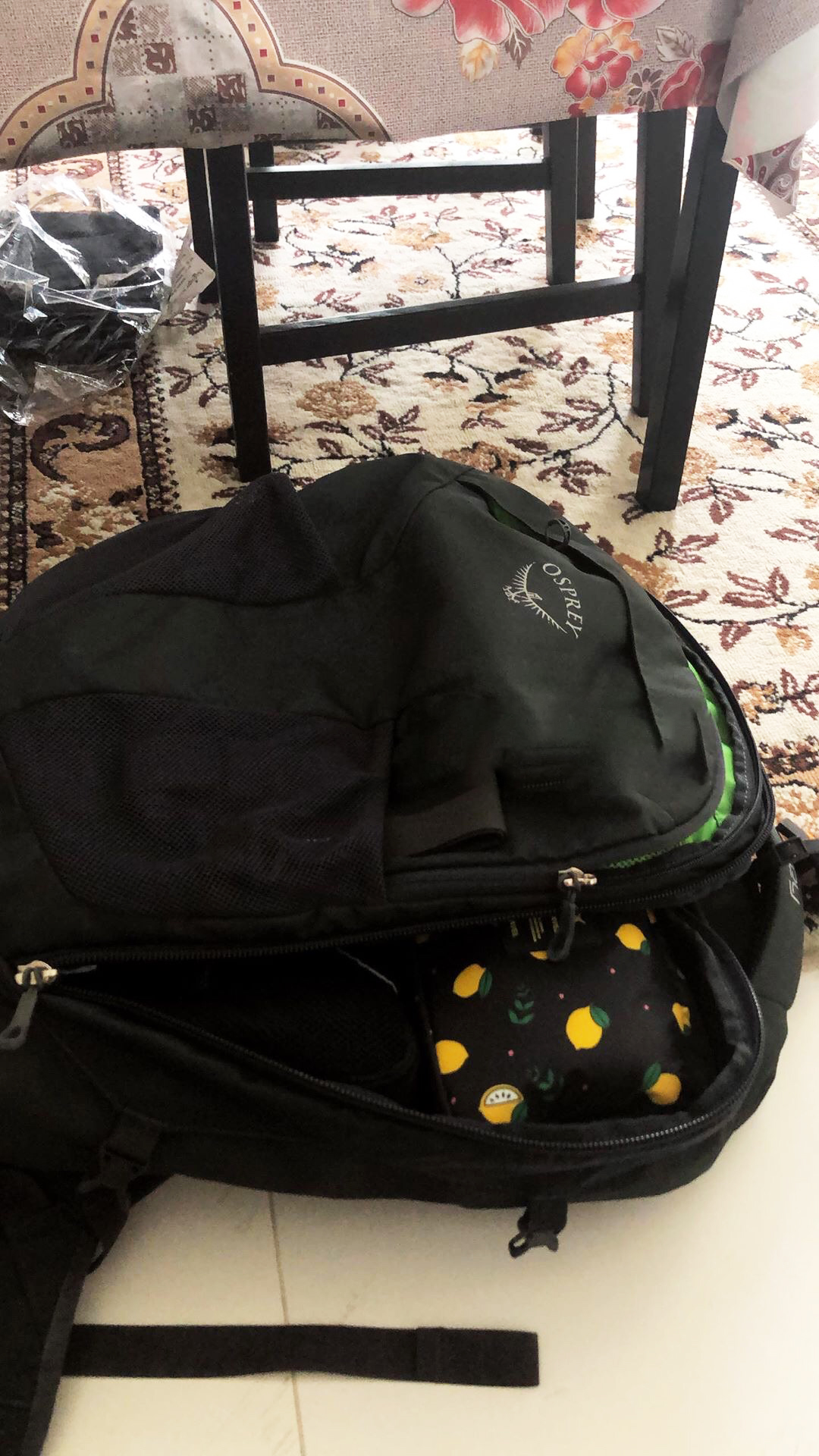 All my belongings went into my Osprey Farpoint 40, which has been my trusty travel companion for the past 4 years.

As an insectphobe, this was something I was not looking forward to at all. I made sure to load up on insect-repelling items – both the spray and the stick-on kind. 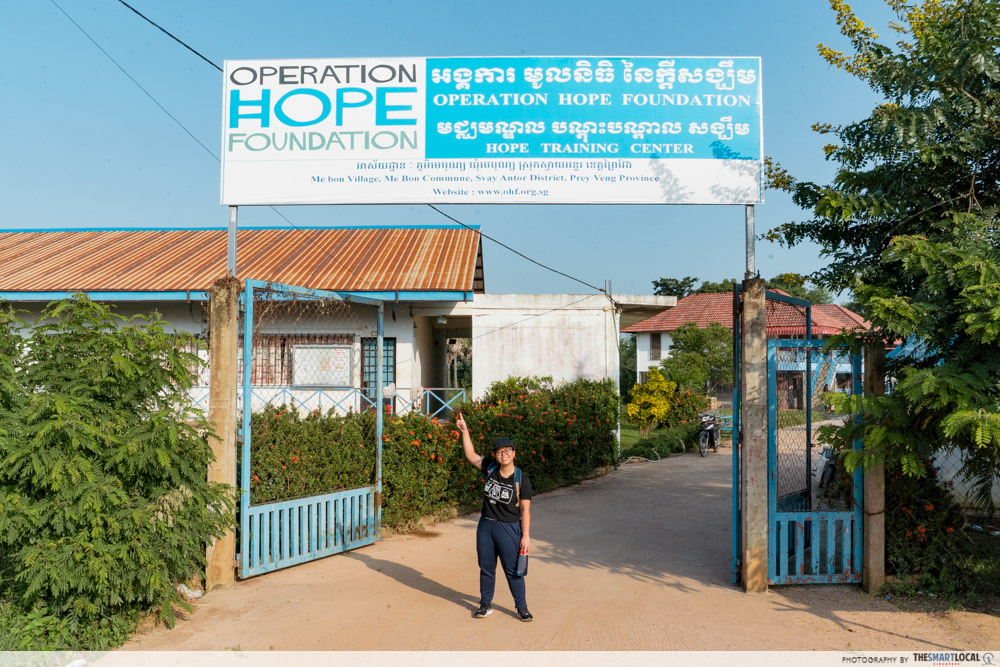 The establishment we stayed at over the 4 days in Cambodia

We participated in the OHF Volunteer programme, which would take us to the Hope Training Centre for 4 days and 3 nights. It’s located in the little province of Prey Veng, some 2 hours away from the main city of Phnom Penh. 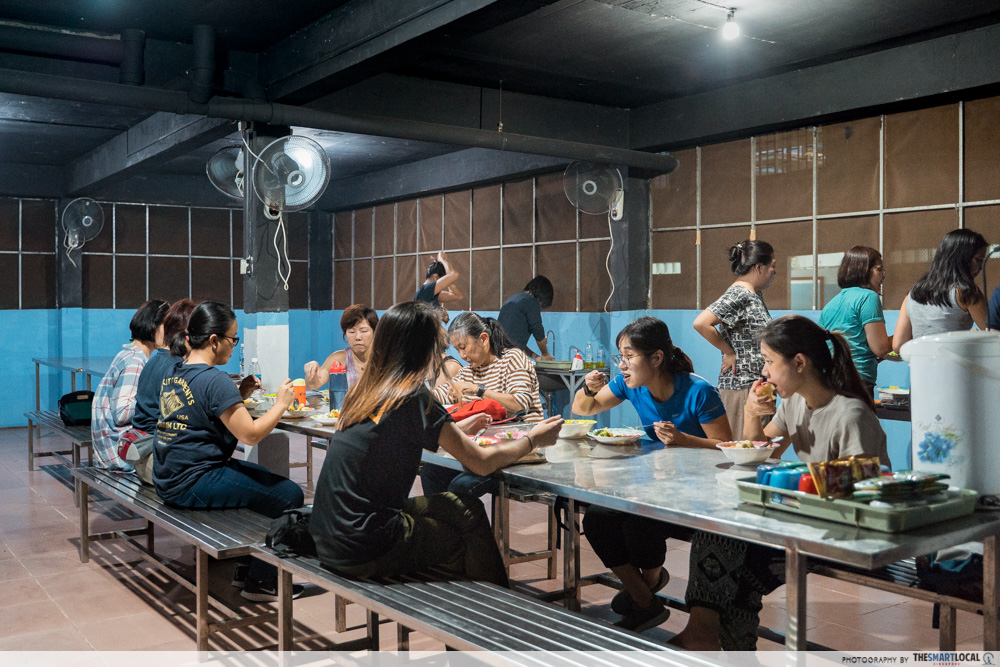 The programme requires a minimum number of 10 volunteers to kick off. You can assemble a team of friends for this cause or join an open group if you can’t make up the numbers. As it was just my colleague, Nadia, and I, we became part of a 16-man team that was led by local team coordinator, La, and OHF staff, Jason. 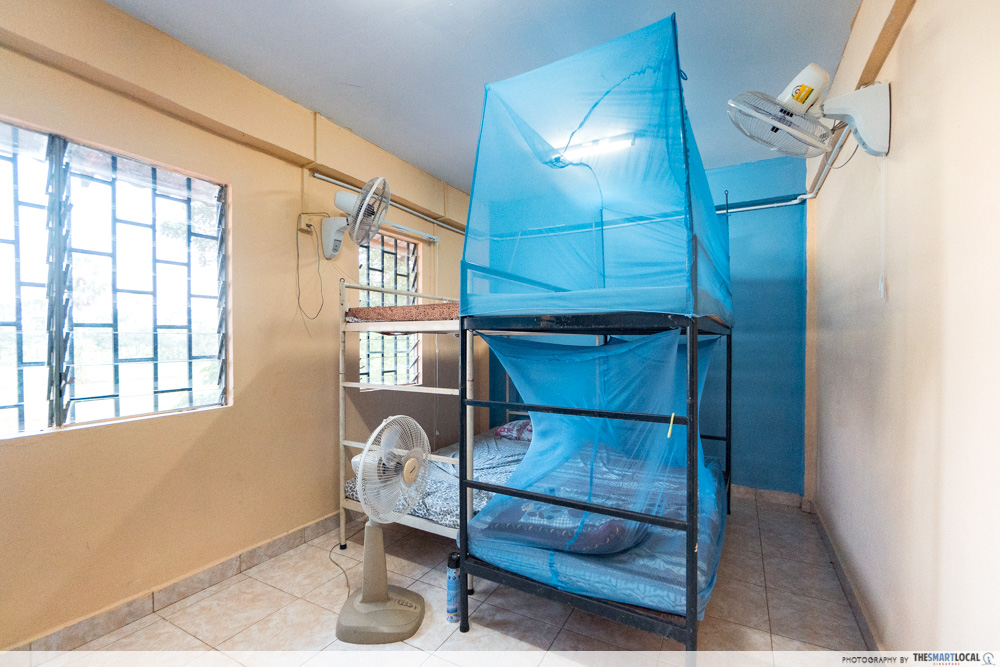 We were housed in rooms of 4 that came with bunk beds, mosquito nettings, and fans. Each room has an ensuite bathroom, and while there isn’t any hot water available, you might just forget about that considering how hot it can get.

The insect repellent I brought came in handy especially at night – when the bugs attracted to the lights would swarm in. The building’s right next to a paddy field, so you can expect 1) all sorts of insects, and 2) the ever-lingering scent of insect repellent. Meals are also provided and prepared by the OHF local staff – expect a no-frills, but homely meal. Breakfast was typically bread and a spread of your choice, while lunch and dinner consisted of meat and veggies with rice or noodles.

As we arrived at the establishment late in the evening, the house building didn’t officially begin until Day 2. We drove out bright and early at 7.30AM, where we took an hour or so to reach the Anhchan Village – where our beneficiary resides in. 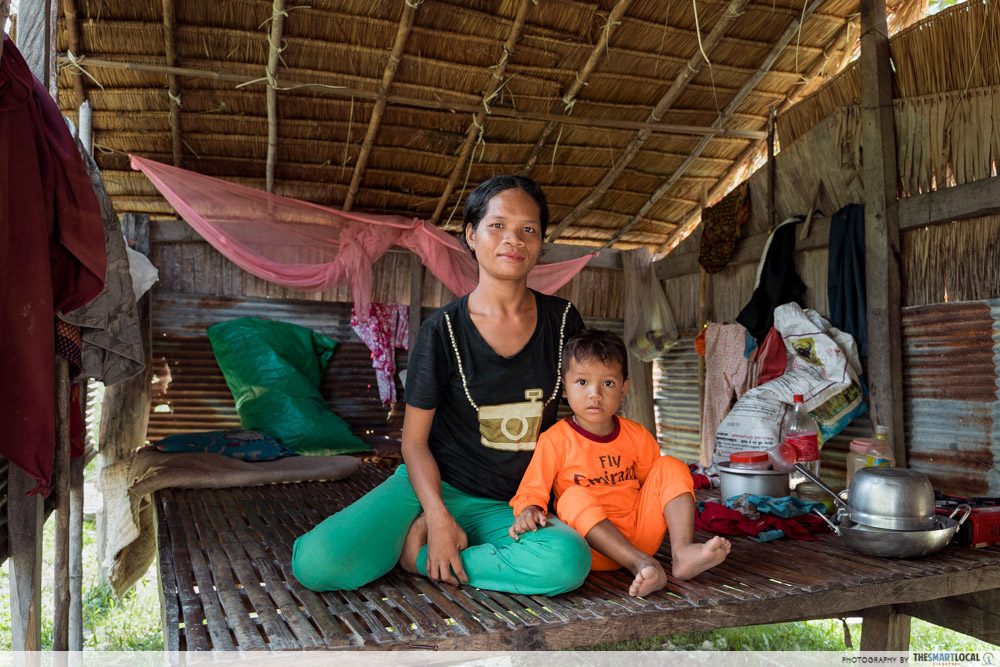 Srey Lang and her son, Peavath

Prior to the trip, we were briefed that we were building the house for Srey Lang, a 30-year-old homeowner. A year prior, her husband fled and remarried another woman, leaving her to fend for herself and her 4-year-old son.

That, along with her feet deformity, made it tough for her to make ends meet. She relied heavily on her neighbours, either taking rice in the form of donations, or taking vegetables from her neighbour’s own plot of land. 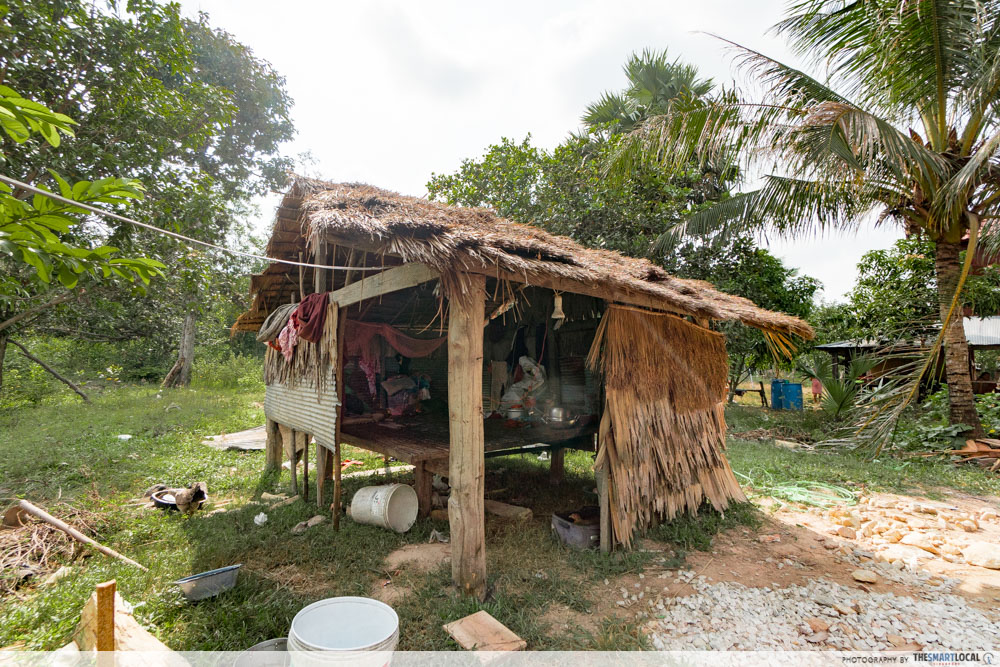 For 4 years, both her and her son have been living in a tiny wooden hut, which we saw for ourselves when we reached the area.

It was way too small for a mother and her growing boy. And on top of that, the thatch roof and rusty zinc walls weren’t enough to give them proper shelter from the elements. It was a shock to see how inadequate their living conditions were, and this fuelled us to work on a house big and sturdy enough for them to comfortably live in.

Day 1: Laying out the foundations of the house 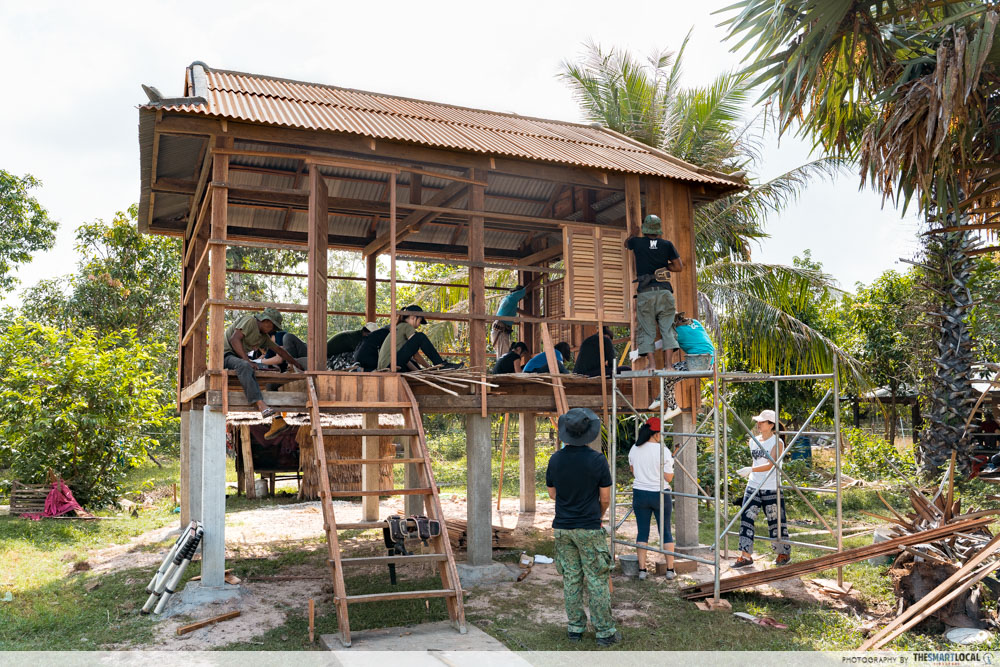 The structural foundations of the house. Houses in rural Cambodia are typically built high to avoid floods and wild animals.

Houses aren’t typically built in a day, but the reason why we were even able to pull this off in such a short amount of time was all thanks to the local OHF staff. They laid out everything from the foundation of the house to the corrugated fibreboard roof, and made sure that everything was structurally sound before us – the volunteers without any construction experience of any sort – arrived.

Now, let it be known that I have never touched a hammer in my life. The only knowledge I have of construction was whatever I gleaned off random episodes of Law of the Jungle. 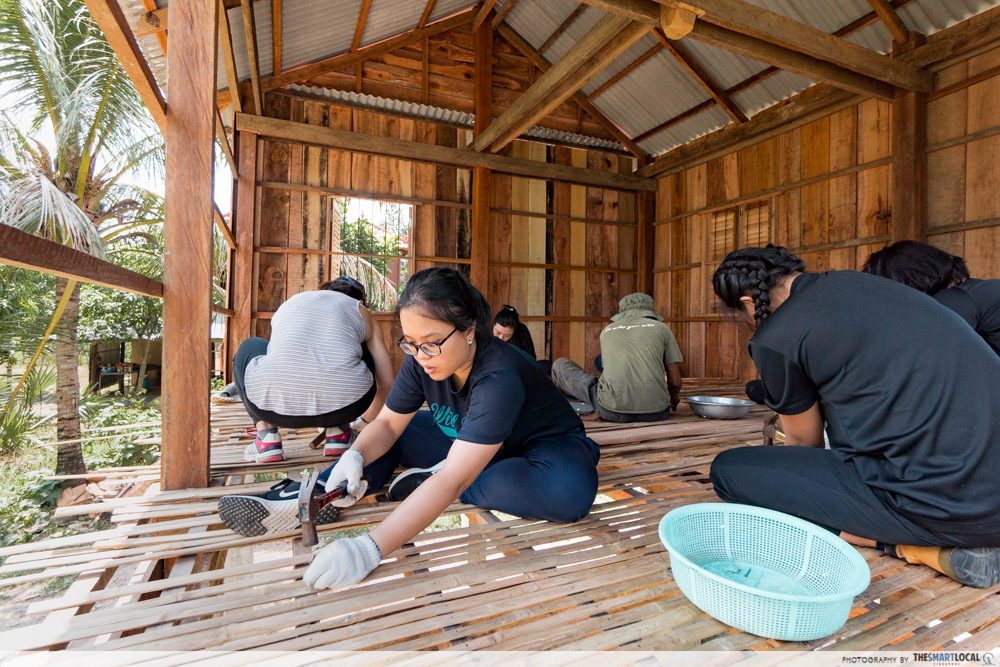 We split up into two groups, with one group placed in charge of the floor, and the other, tasked with the walls of the house. I chose to join the first group, which had me nailing bamboo strips to the floor for a good 3 hours straight. 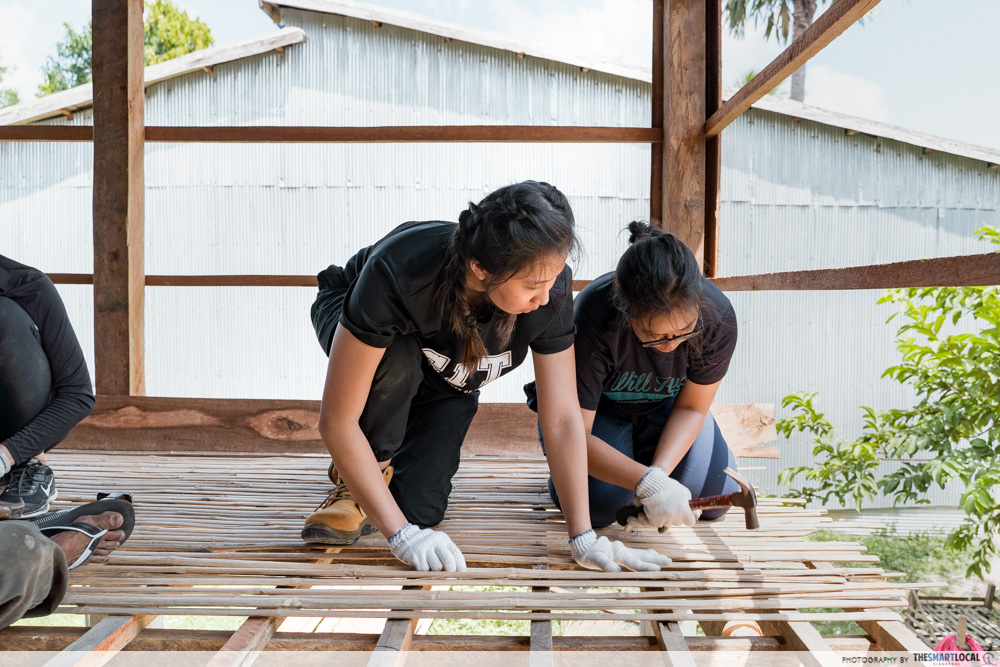 We got by with a little help from our friends

Over the course of the day, I hammered my thumb more times than I care to admit. Not to mention, it was unbelievably warm. But with help from the local OHF staff, as well as from the other OHF volunteers, we finished the flooring within half a day. 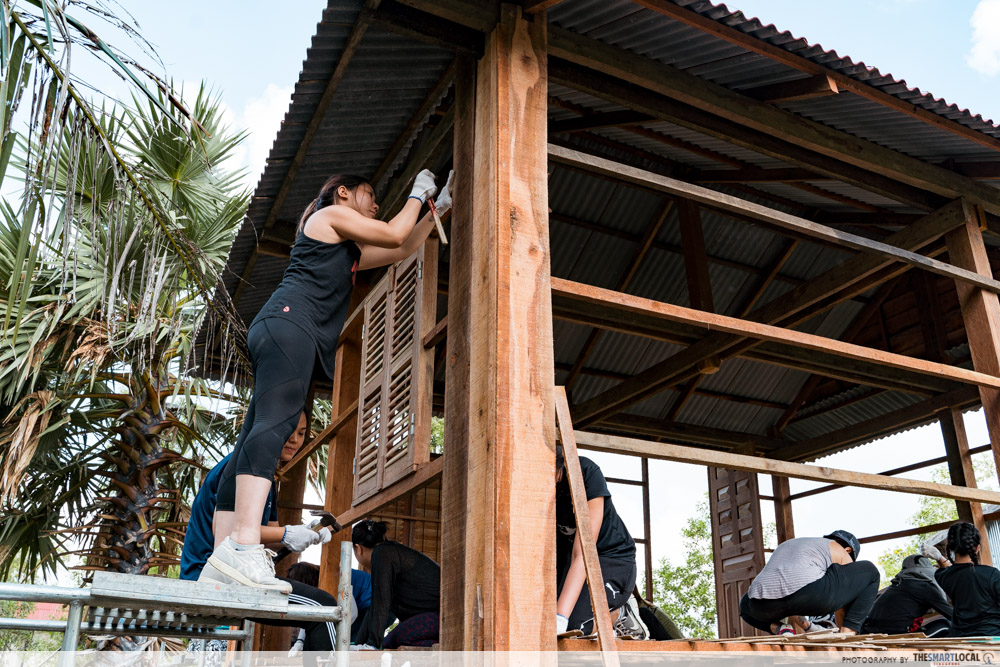 While we were doing that, the other half of the group worked on nailing wooden planks to the side of the house. Their task was a little more physically-intensive as they needed to balance on a metal scaffolding and reach up to hammer the planks in. And after working hard for half a day, the house was about 75% complete. All that was left was erecting the back wall, and covering the house with a coat of paint. 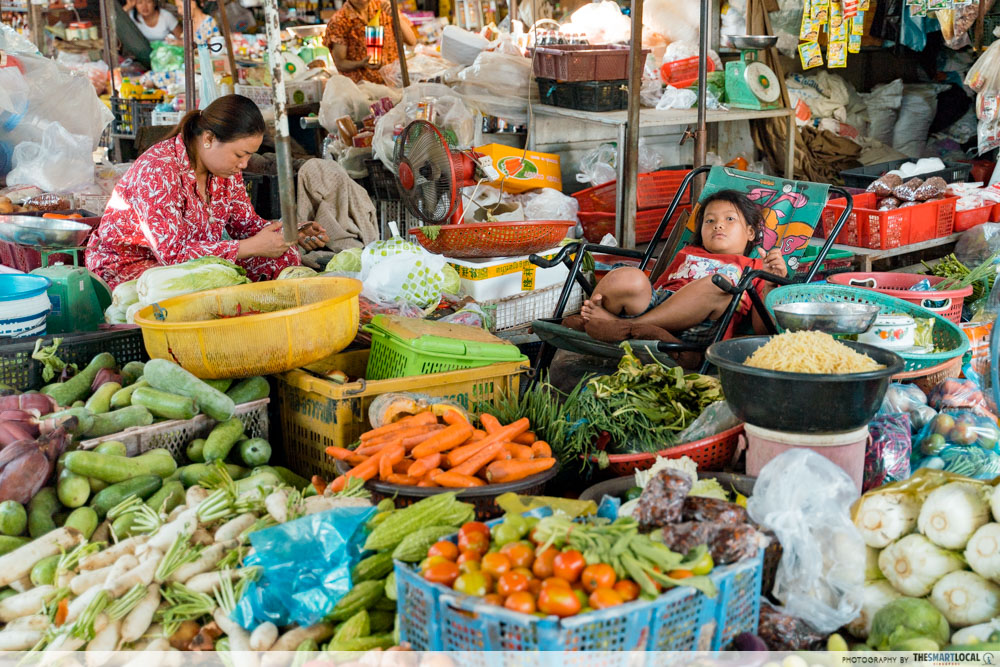 The itinerary also included a little R&R, which came in the form of visits to the Prey Veng market and the OHF Children’s Home. As it was my first time in Cambodia, it gave us little glimpses into the Cambodian way of life, which made it a nice cultural reprieve after the work we did that morning. Once again, we set out early in the morning to finish up the back wall of the house and paint the walls. With a height of 1.53M, I figured it would be one hell of a challenge to paint every nook and cranny of a stilted house. But surprisingly, it went relatively smoothly. I didn’t have to tiptoe or find my balance on any scaffolding – the paint rollers are attached to long bamboo poles, which made it easy for even the shortest of humans. The OHF Team with the beneficiary and village officials, posing in front of our completed house.

And after 10 hours, our work was done! Within one and a half days, we managed to complete a bigger, better home for Srey Lang and her son. To say that we felt proud and accomplished would be selling it short.

Bonus: Distributing food and slippers to as many as 200 children 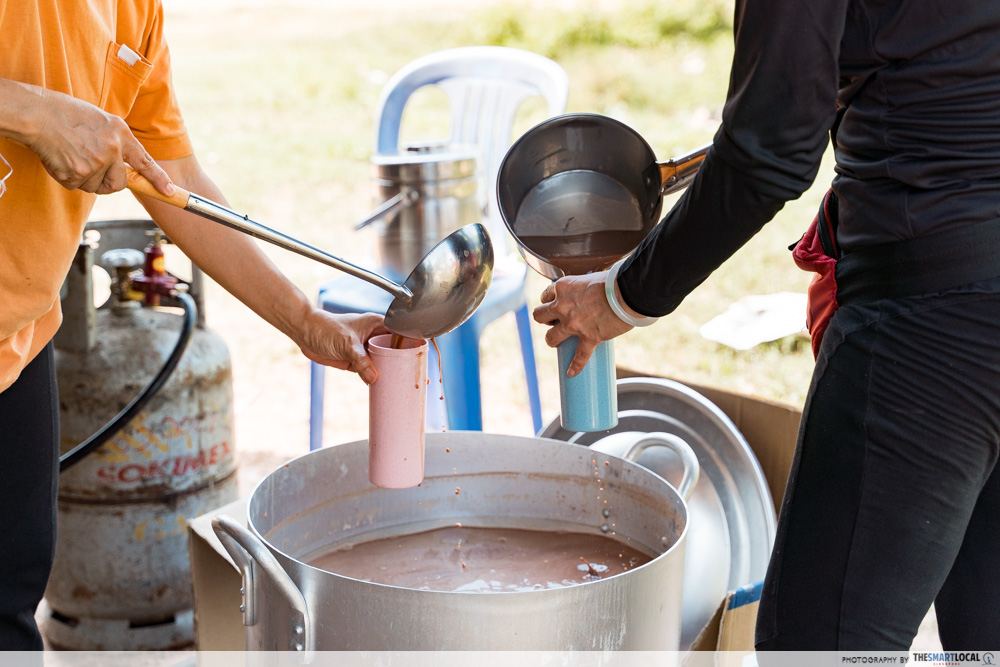 Preparing the Milo before the distribution

While the typical OHF volunteer programme mainly involves building houses, our programme was a little different. Thanks to generous donations from this batch of volunteers, we were able to carry out food distributions for villagers. 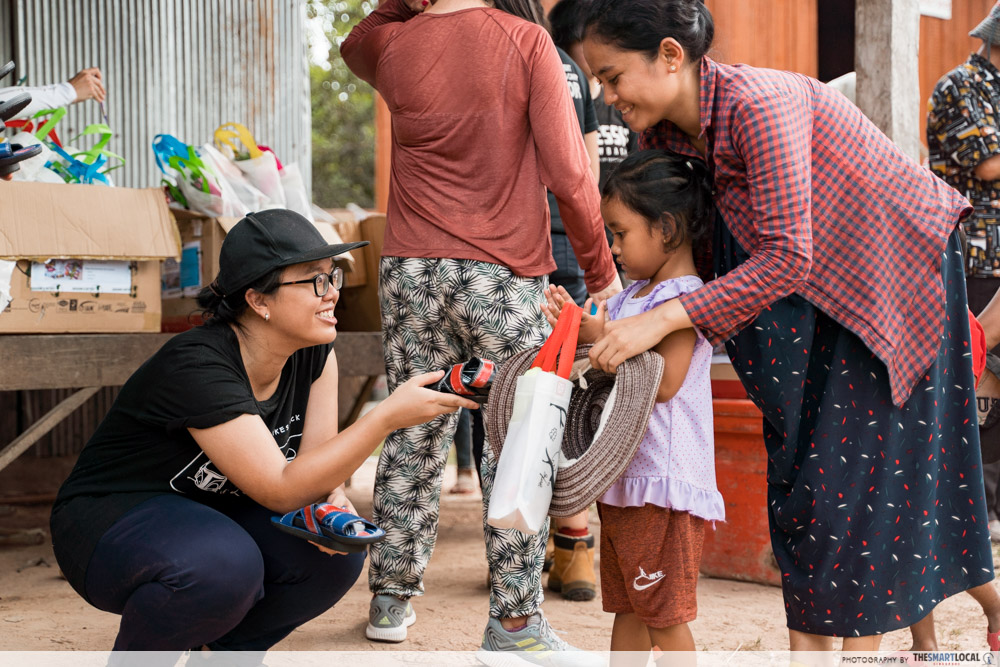 We watched in amazement as kids of all ages came by the dozens, where they formed a line to collect the donations.

The first one of the day was for 200 children in the village, where they were each given a pair of slippers and a tumbler filled with Milo, as well as a goodie bag filled with snacks, colouring books, and a toothbrush set. And once that was done, the 25 poorest families in the village were also given a huge food pack consisting of a 50kg rice packet along with other condiments. This was all witnessed by the village and community chiefs, who oversaw the entire distribution during the day.

Takeaways after building a house

And with that, the programme was complete. At the end of it, we were covered in sweat, sawdust, and paint – and not to mention, we were dizzy in the hot Cambodian afternoon. But as we boarded the lorry back to our accommodation, we left feeling an immense sense of accomplishment. The house we built may have just been for one family, but at least that family would be able to sleep with a much sturdier roof over their heads. And other than that, sipping a cup of Milo and having a proper home are just things I realised I took for granted. It may be simple things to us, but to these children, it made a world of difference in their lives. And during the programme, I befriended a group of people who shared the same passion for making a difference. To witness that dedication up close was truly inspiring – and knowing that I could meet like-minded people participating in similar programmes has made me more motivated to take on more volunteering opportunities overseas. 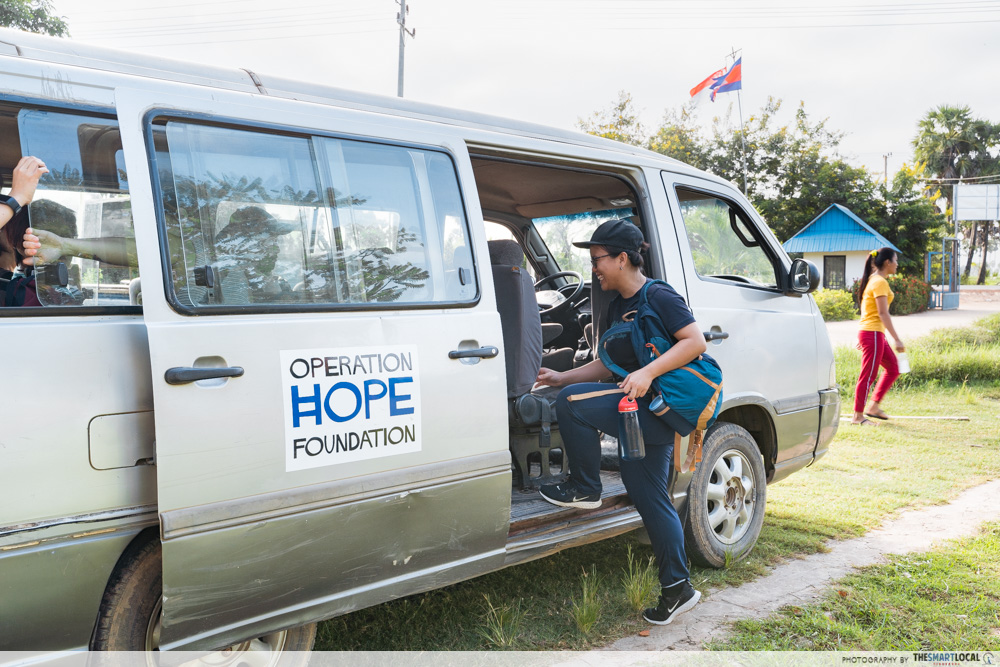 Whether you’re pondering grad trip ideas or looking for a unique way to spend your annual leave, programmes under OHF are an alternative to road-tripping around Europe or South Korea. Apart from Cambodia, they also host volunteer operations in the rural villages of Nepal.

OHF runs their operations directly rather than through agencies, which means they have direct control over everything from the management down to the expenses. That means that whatever effort you choose to put in with them – be it via donations or by volunteering – will be directly translated into benefits for their beneficiaries.

They organise several volunteer programmes to both Nepal and Cambodia throughout the year. You’ll find their full set of programmes and dates for 2020 on their website!

This post was brought to you by Operation Hope Foundation. 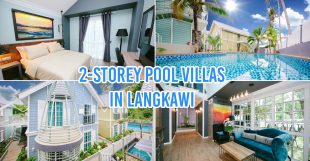 11 New Resorts Near Singapore From $45/Night For Cheap Year-End Getaways In 2019
8 Practical Tips For Dog Owners In Singapore To Save Money While Being A Responsible... 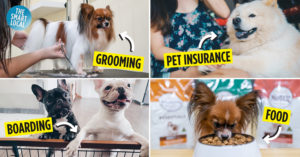