Do We Need Minimum Wage in Singapore? 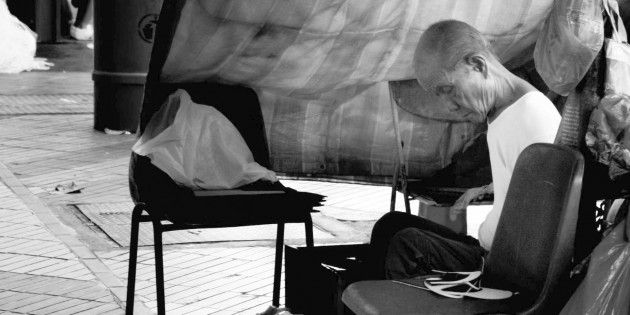 From 1996 to 2009, the lowest 20% of Singaporeans’ incomes remained stagnant while the income of the top 20% has steadily increased. 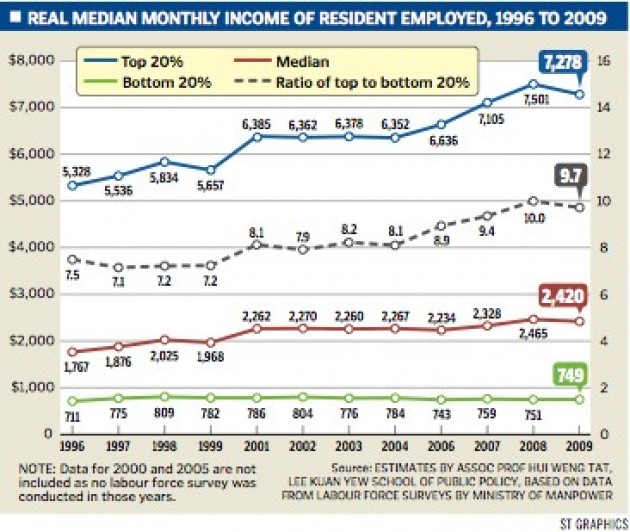 There have been calls to implement a national Minimum Wage which would have forced an increase in the lowest 20% of Singaporeans’ income. However, the NTUC instead proposed and implemented the Progressive Wage Model (PWM) for low wage sectors, explaining that a minimum wage would make the low income earners even worse off.

This article will bring you through Minimum Wage, Progressive Wage, and what NTUC and the Government got completely wrong.

What is Minimum Wage?

Minimum Wage is a law that demands employers pay their workers a set amount of money. If a national Minimum Wage is set at $10/hour, it means that as long as you’re working in Singapore, you’ll be getting at least $10/hour, whether you’re doing data entry or working as a service staff at McDonald’s. It also means that all education levels have an equal starting point: PSLE holders will be paid at least $10/hour, just as graduates from local universities will be.

Minimum wage is colour blind, gender blind, and education blind, and ensures that everyone gets the same pay regardless of experience or qualifications.

Note: Examples in this article will use $10/hour as an example of a minimum wage.

What the NTUC says about Minimum Wage 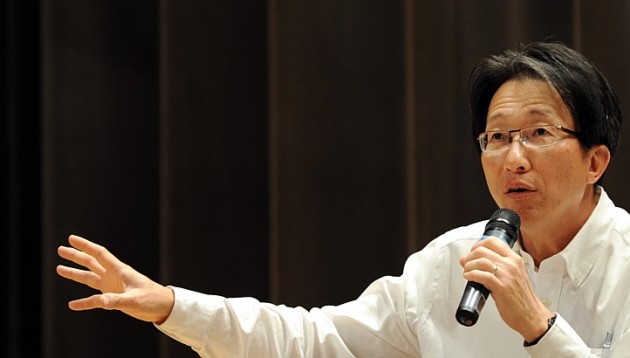 1. Employers are reluctant to pay more than the Minimum Wage

2. Minimum Wage is hard to raise

3. Minimum Wage will cause unemployment

But are these reasons valid?

1. Are Employers reluctant to pay more than the Minimum Wage?

2. Will Minimum Wage be hard to raise?

3. Will Minimum Wage cause unemployment?

Reasons #2 and #3 are compelling reasons not to implement Minimum Wage. Still, what is Progressive Wage and is it better than Minimum Wage?

What is Progressive Wage? 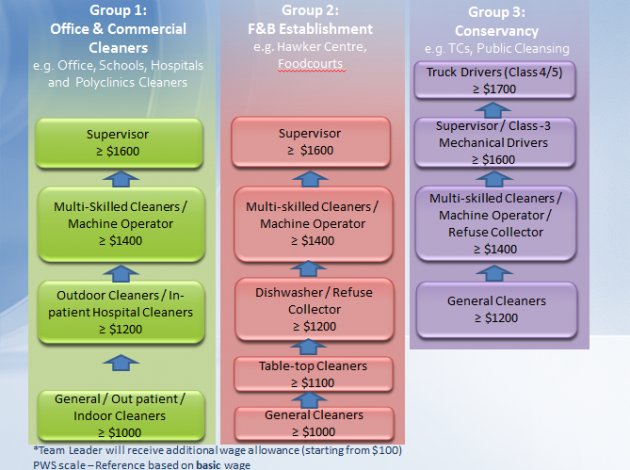 The premise of Progressive Wage is founded on 4 ladders: Skills, Productivity, Career, and Wage. Basically, under this model, Workers get a basic Wage, with guarantees of higher pay if they attend courses to further their Skills, increase Productivity and take on higher level Career responsibilities.

Simply put, think of Progressive Wage as a scheme that forces employers to pay you $10/hour to flip a burger, then allowing you to upgrade from flipping a burger to being a store manager with training and pay increase.

Yes, underneath all the technical talk, Progressive Wage has a Minimum Wage component in its mechanics. If you stripped away the jargon about Productivity, Skills, and Career, the component left behind is Minimum Wage.

But having a Minimum Wage isn’t enough – with Minimum Wage already assured, we should set their sights on higher targets. We should aim for clear paths for career progression and skills upgrading. And this is something that NTUC has successfully introduced with Progressive Wage.

So what did NTUC get wrong?

A huge opportunity was missed when Progressive Wage was rolled out. Instead of getting the support of everyone on the minimum wage bandwagon, NTUC confused people with the ‘Progressive Wage Model’ name and then wrapping it in technicalities. They could have just given it a familiar name like Minimum Wage+.

Although the PWM is meant for all workers (including PMEs), the people who most need to know about Progressive Wage are the lower income group. They’re also the people who can’t see through bureaucratic speak and jargon. They want to know that their livelihoods are safe – not about courses, productivity, or skills. However, the fact that Progressive Wage encompasses a Minimum Wage isn’t a point that comes across to this group clearly enough.

So… Did NTUC get anything right? Actually, quite a lot. 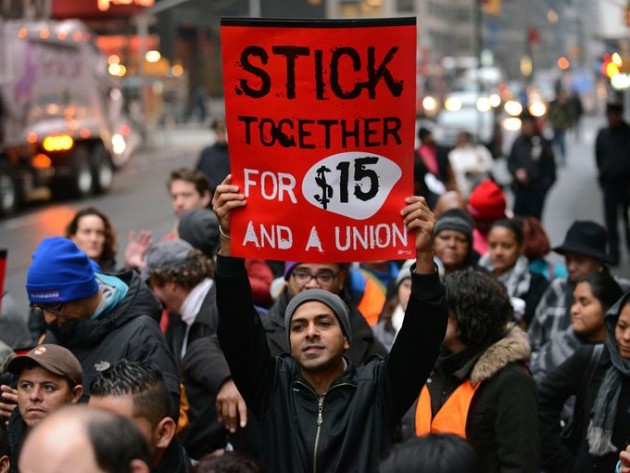 This leads to a win-win-win situation for Employers, Workers, and the Government, especially when compared to countries with Minimum Wage, where the most common way to raise Minimum Wage is by rioting or striking.

We need to understand Progressive Wage better. Many of us don’t realise the need for structured wage raises through training schemes because it’s intuitive to us – many PMEs have career paths planned out years in advance. Low wage workers, on the other hand, don’t. Without Progressive Wage, a cleaner who started work 5 years ago would still be doing the same thing 10 years down the road. Progressive Wage was conceived with these Singaporeans in mind, to ensure that they have a stepping stone, just like most PMEs do.

In fact, although Progressive Wage is already mandatory for cleaners, will be 2016 for workers in the security and landscaping industries, NTUC and other unions have been working with other industries to have Progressive Wage even for PMEs, giving PMEs a more structured way of advancing through their careers.

Why we need unions

Some say NTUC is toothless and that the policies they push out aren’t beneficial to us, but Progressive Wage clearly shows that that’s not true. By harnessing the collective bargaining power of workers, NTUC is able to negotiate a deal with the employers and government rather than have workers go on strike to push for their rights.

NTUC has had to negotiate with the government to update the Employment Act, to push for Progressive Wage, and for subsidised training for Workers. On the other hand, NTUC also had to negotiate with Employers to obtain better staff benefits, to cut costs to save jobs during economic downturns, manage grievances, and to negotiate annual wage increases. These aren’t easy.

The Government-Employer-Union relationship works behind the scenes to effect changes that impact all of us, whether we realise it or not. A harmonious relationship between all 3 parties helps Singapore to maintain social strength and stability.

How have the lowest 20% fared in the last few years?

According to MOM, the gross monthly income of the lowest 20% has increased by 31.5% from 2009 to 2014. Besides having higher incomes through Progressive Wage, the lowest 20% is also eligible for help through ComCare, Workfare Income Supplement, and subsidies for housing, healthcare and education. Read more about these programs here. 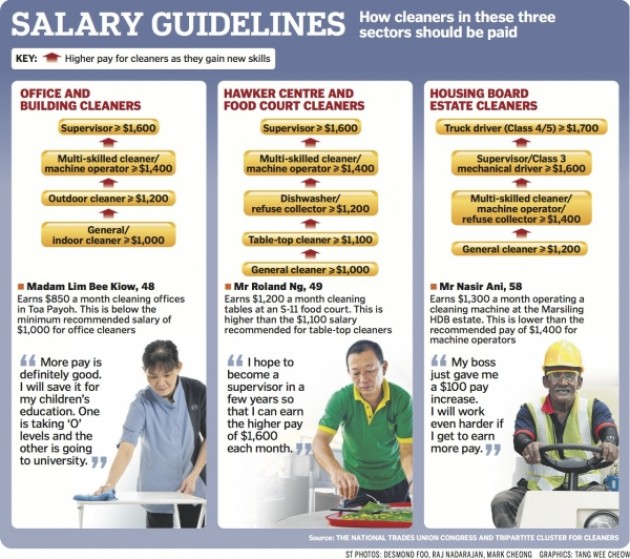 Nobody counts the number of ads you run; they just remember the impression you make.” – Bill Bernbach

Do you agree a harmonious relationship among Unions, Government and Employers helps Singaporeans succeed?
Yes
No

This article is part of a series of conversations with the Labour Movement.