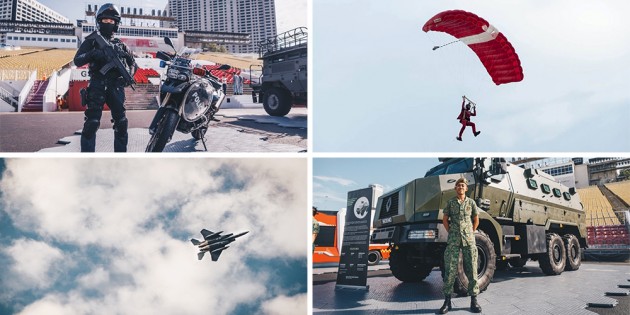 We’ve all gleefully plastered ‘I Love Singapore’ tattoos on our faces at least once in our lives, and for some, the exhilaration of watching the nation unite in song and dance, and the fireworks glamorously close the parade, are what keeps them coming back for more.

But whether you’re a religious parade attendee or just someone looking to enjoy this year’s festivities, here’s a sneak peek of what to expect from never before seen segments to the comeback of our favourite Red Lions at this year’s NDP 2017: 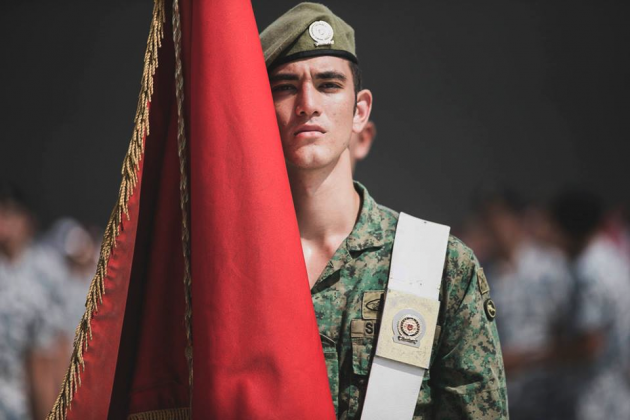 Ah boys to men and our protectors forevermore! Source

Our national servicemen spend almost a good 2 years of their lives low-key protecting our nation, and it’s about time we show our appreciation for their efforts. This NDP, join the spectators in a unified salute to thank all our NSmen, their families, and employers for their dedication to our nation for the past 50 years.

2. Be wowed by the latest military vehicles and witness a live reenactment of a terrorist attack 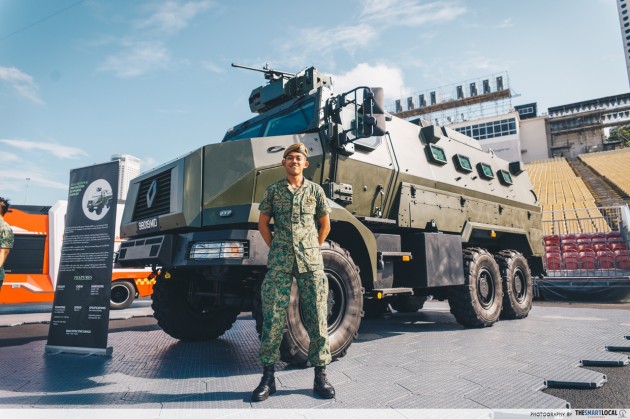 Ever ready to defend our country in the event of danger, the SAF brings back its Dynamic Defence Display (D3) after a two-year hiatus to show Singaporeans just what they’ve been busy working on. The highly anticipated segment is made up of 2 parts – a showcase of Singapore’s land and sea military capabilities, and a realistic simulation of a counter-terrorism. 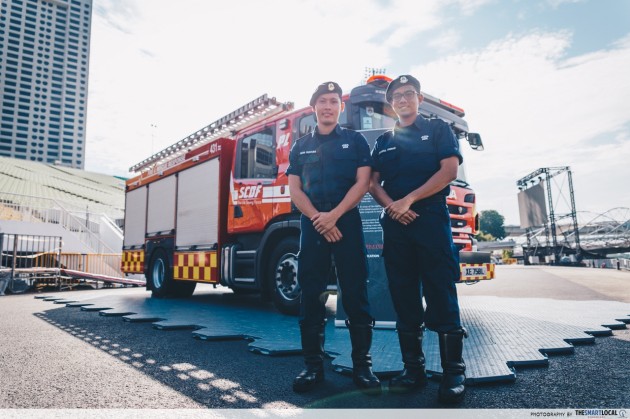 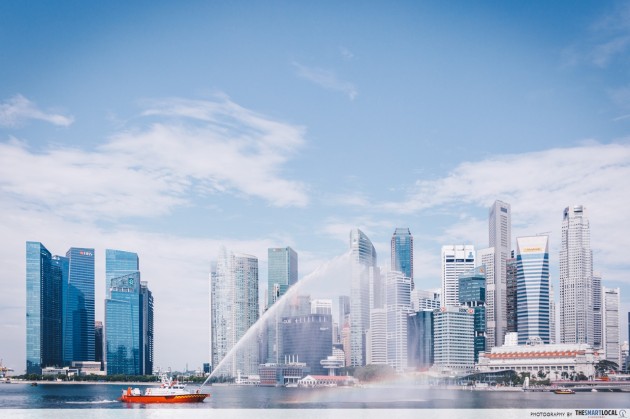 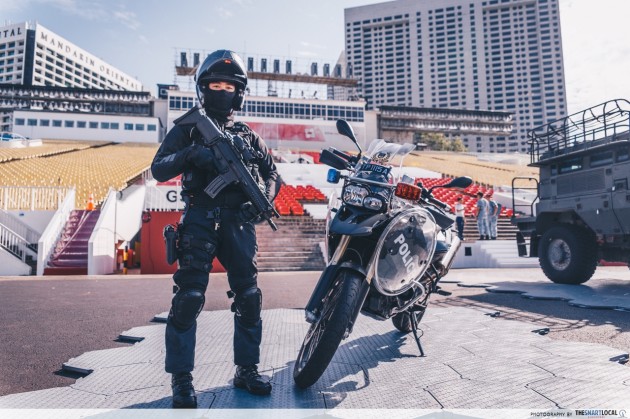 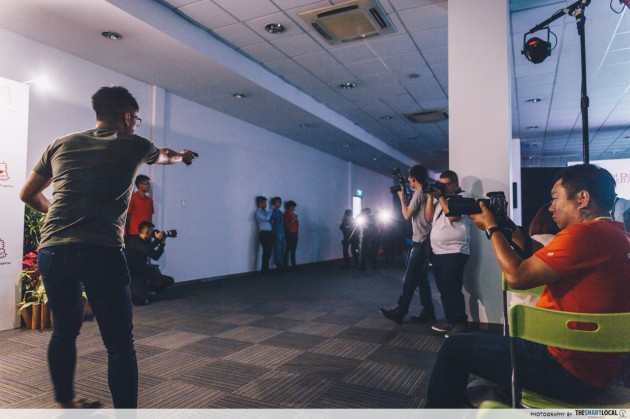 While getting embroiled in a terror attack is a reality most of us wish to never experience in our lifetimes, the Special Operations Task Force’s intense counter-terrorism demonstration will have you squirming in your seat. Brace yourself for realistic gun shots, a blanket of smoke in the air and the flying of sparks! 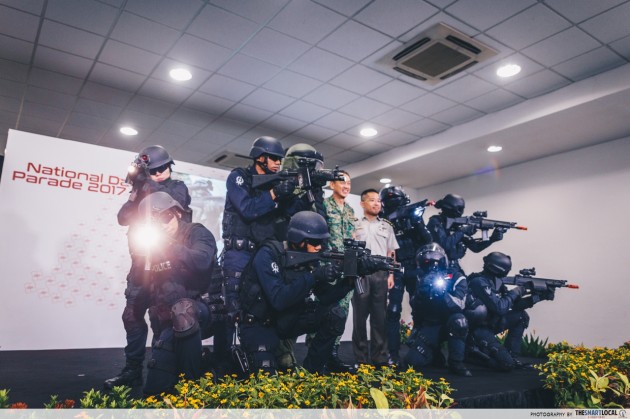 The display places emphasis on the importance of community trust, vigilance – reminding us that safety is definitely something we cannot take for granted.

3. Watch a comeback parachuting performance by the Red Lions

If there’s one thing that most of our Primary 5 selves vividly remember at our first-ever National Day Parade, it’s the slick yet graceful landing of our parachuters in the Parade square as though straight of out a Mission Impossible movie.

Sorely missed at the 2015/2016 parade, our soaring Red Lions will finally be back to tantalise the crowd with an impressive air display – so ready your lungs to cheer them on! 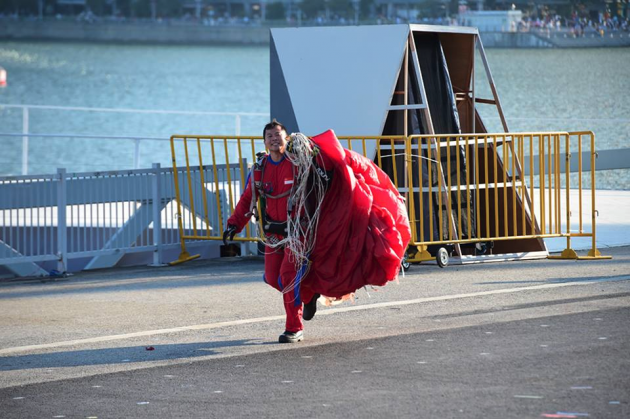 4. One of the MCs is not like the rest 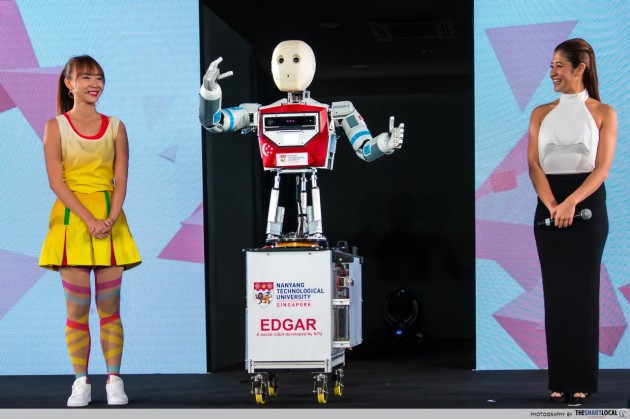 One of them is not like the rest. Taking the stands besides familiar faces and voices of our hosts Joakim Gomez, Julie Tan, Subramaniam Narainda and Nurul Aini this year, is a unique individual – Edgar-2, a robot who is the brainchild of a group of researchers over at NTU. Built with quite a personality and a river of wit, it’s hard to tell what he’ll get up to at this year’s parade.

5. Watch the show via a 360-degree video streaming and participate in real time 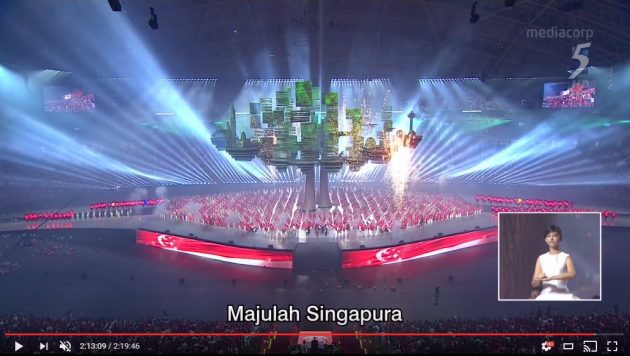 And even if you’re stuck in boarding school, university, or a job stint abroad and not physically present to the witness this year’s celebration, you’ll still be able to join in on the parade’s magic through a 360-degree live video stream on Youtube and be a part of the conversation on platforms like Facebook, Instagram and Twitter via the hashtag #OneNationTogether, #NDP2017, #NDP17, and #SG52. 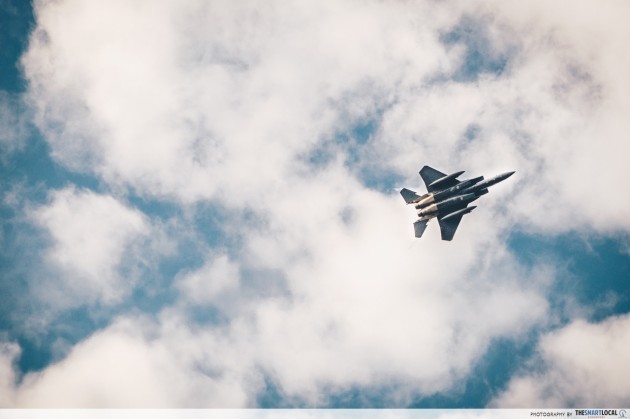 2 of 5 of the F-15SG air crafts are being commandeered by NSmen for the first time!

If fighter jets and Apache helicopters ring your bell, look out for the RSAF’s Aerial Salute to the Nation, with 5 F-15SG fighter air crafts taking to the skies to perform a bomb burst manoeuvre for the first time ever. 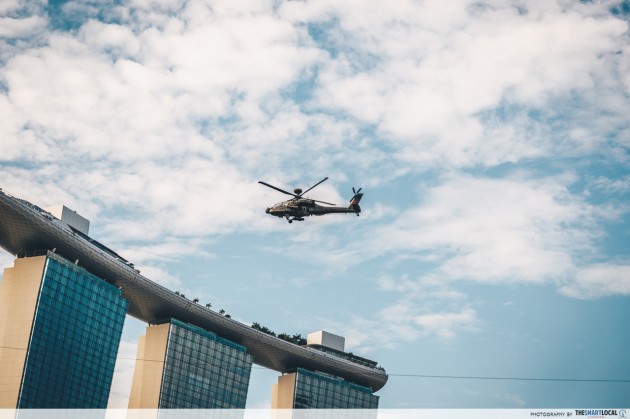 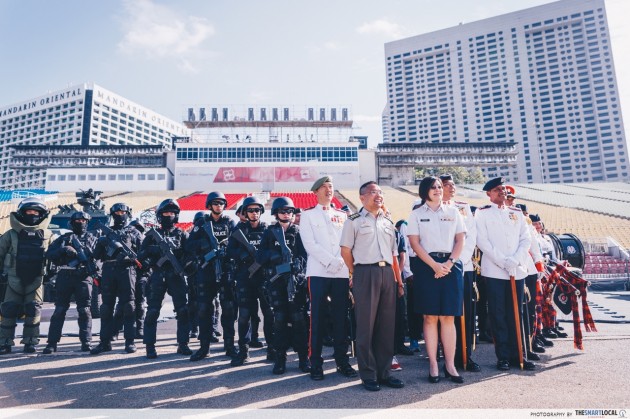 This year’s military tattoo segment will be the largest one yet, with a strength of 170 performers making up a combined band, silent precision drill squad, and bagpipers from the Singapore Police Force and performing some of our favourite NDP hits!

7. The surprise of their newest fun pack 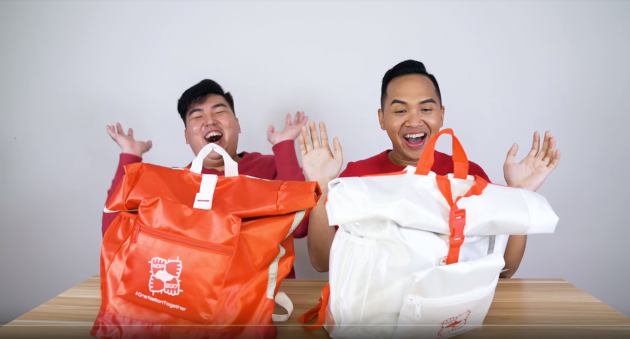 Stay tuned to watch Chris and Fauzi unveil what’s in our NDP fun packs this year!

I think we can all come to a general consensus that the NDP fun pack is a cause for excitement for all attendees. It’s akin to Dora the Explorer’s magical backpack, just sans the English and Spanish speaking capabilities.

Expect to find everything you’ll need from an innovative multi-purpose clap banner to the fun pack staple tattoos we know and love to get in on all the action and festivities. 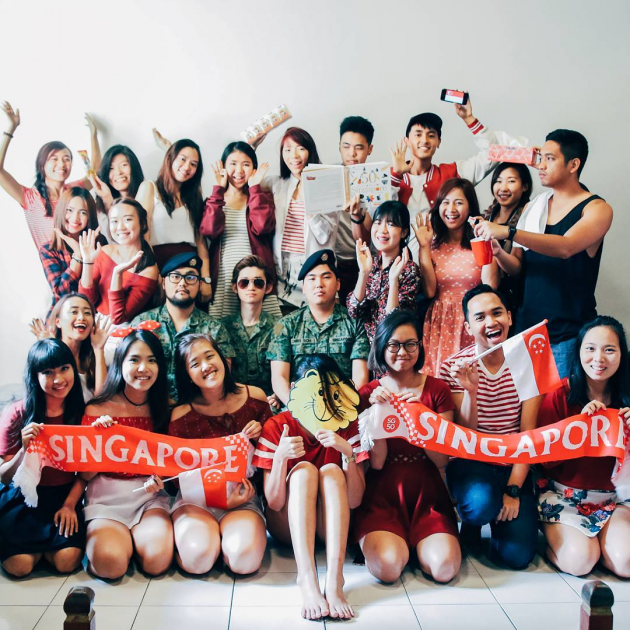 More than just a show of arms, it’s interesting to note that every single parade is modelled to represent the authenticity and genuine nature of an actual birthday party – just on a much larger scale. And that’s not all – from an inaugural unmanned aerial drone performance to a showcase of talents of all ages, you’re in for a real treat at this year’s NDP 2017.

Win yourself a pair of NDP 2017 preview tickets! 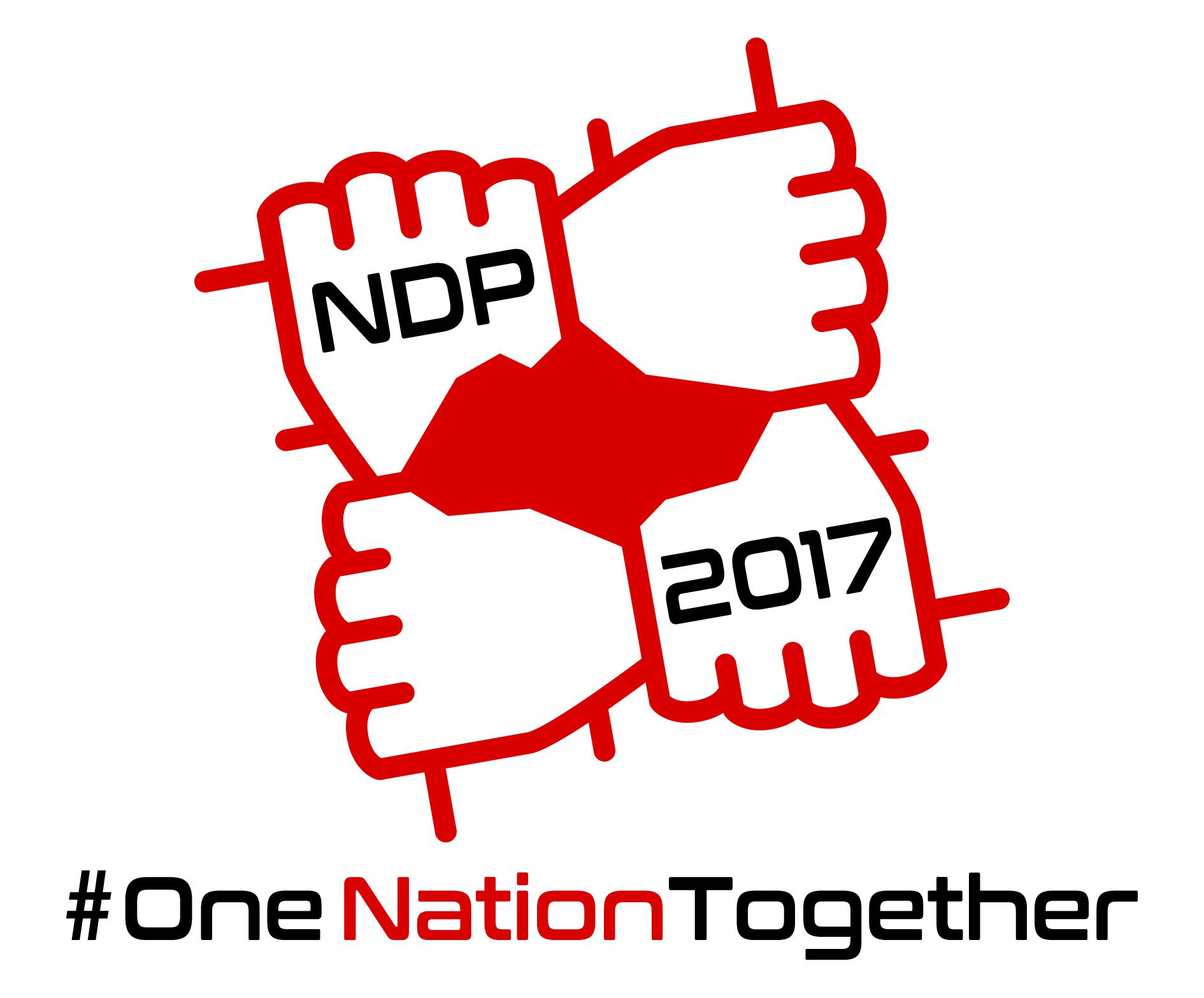 If you’re dying for a chance to catch all the action up close and centre, here’s a chance for you to walk away with one of the three pairs of NDP 2017 preview tickets up for grabs!

All you have to do is:

This contest ends on 17th July and 3 lucky winners will be chosen at random – each winner will walk away with a pair of tickets to the NDP 2017 preview on 29th July 2017!

7 Unreal Places In Hokkaido To Visit For Less Than $10 After Splurging On Airfares
DBS Has An FOC Financial Planning Service If Your Only Game Plan Is Saving In...