The latest all-day cafe and bar 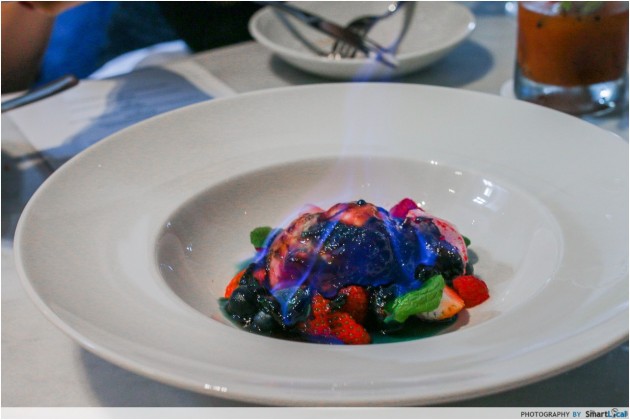 With its string of watering holes, Ann Siang Hill boasts chill vibes in the night. In the day, The Club, a hotel along Ann Siang, offers the same idyllic experience with its newly refurbished site inclusive of a lounge cafe: Mr and Mrs Maxwell’s.

Conceptualized as a cafe inspired by the halcyon days of a couple’s travels, Mr and Mrs Maxwell’s sits unassumingly at the base level of The Club, a luxury boutique hotel housed in a charming 19th century colonial building. 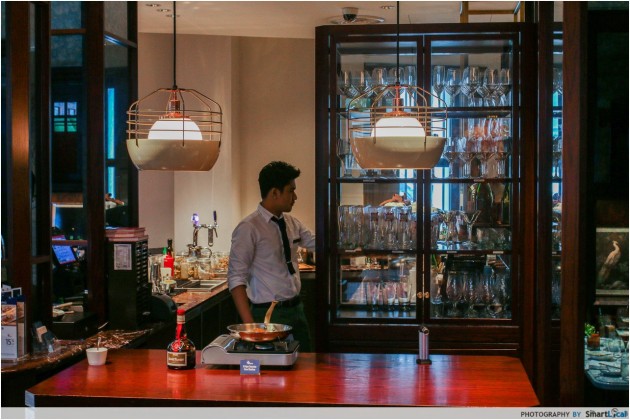 You’ll be spoiled for choice with their around-the-world menu, which covers the basic cafe all-day breakfast, as well as soups, salads, sandwiches, and even main courses such as steak or a recreation of laksa. If you’re not down for a bite, unwind in this living room with either a refreshing blend of juices or an Adult Shake – a classic milkshake with a splash of alcohol. 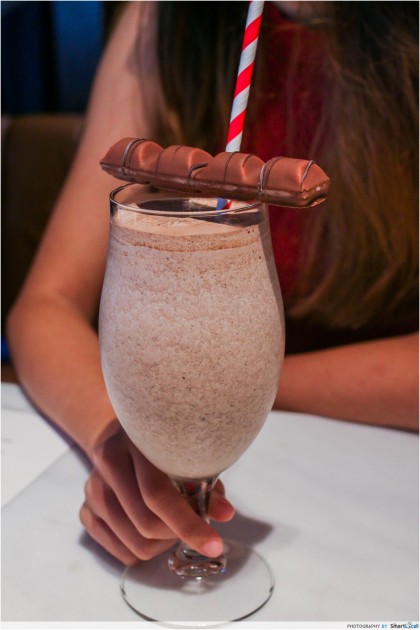 I have an unadulterated passion for milkshakes, and I cannot lie. I don’t just have a sweet tooth – every tooth and bone in my body loves sugar. The selection of Adult Shakes was the fantasy of both the child and the young adult in me, offering tall glasses of icy goodness with just a tinge of alcohol.

With the Chocolate Baileys, it was love at first sip; the immediate consecutive long-drawn sips straight after the first one; and the swigs for the rest of the meal. The beverage’s taste was dangerously close to that of a plain ol’ chocolate milkshake. With just a barely-there warmth from the liqueur, the drink becomes too easy to down, making it incredibly addictive.

I wouldn’t mind crumbling into a degenerate drunk from this, but it’d probably take a couple of pricey glasses. 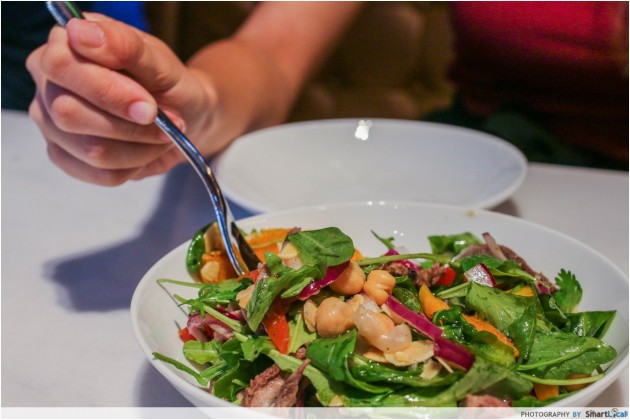 Behind this dish lies a little tale of Mrs Maxwell’s effort at making her better half enjoy his greens more – and she certainly does a good job with this vibrant salad! I usually stay away from anything that resembles a rabbit’s meal – ick, clean eating – but I was subconsciously digging my fork into the bowl again, and again, for this goodness. 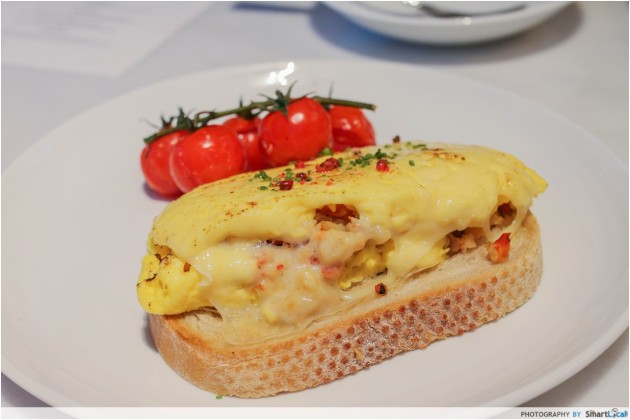 A lobster-stuffed omelette with fresh herbs, served on sourdough toasted with gruyere cheese.

Despite its magnificent sounding description, the dish ended up leaving much to be desired. While the omelette was stuffed with copious amounts of lobster, the meat didn’t taste as fresh as I’d imagined it to be. The egg had an unimpressionable taste and texture, and the sprinkle of herbs barely helped.

The sourdough bread, although toasted, was already soggy from the moisture when served, which made it even less appetizing. However, a plus point would be that the roasted tomatoes served alongside it were bursting with flavour, saving this dish even if just a little. 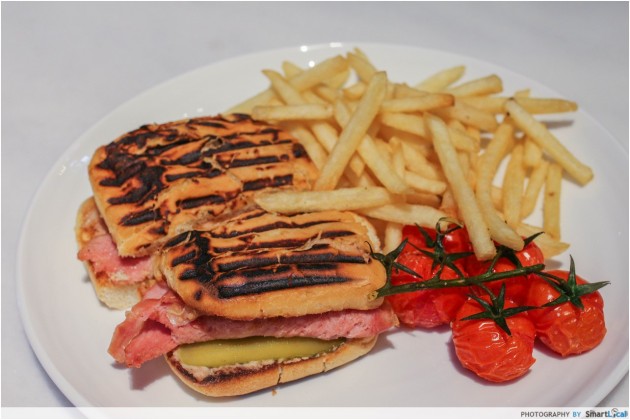 Being one of the more expensive items on the menu, the drab taste of this dish was disappointing. It’s almost shocking how pricey this construction, consisting of simple honey-baked ham, luncheon meat pate, and pickled gherkins, is. 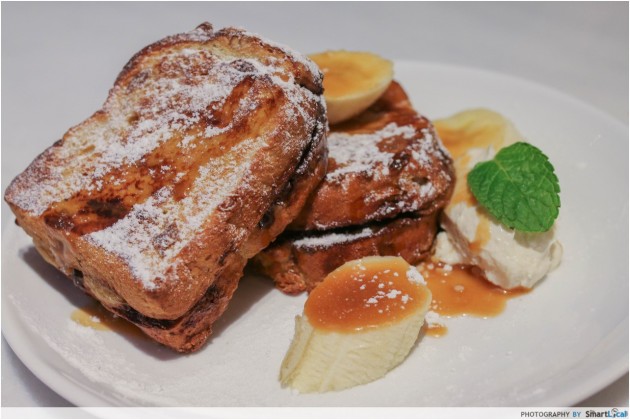 Strangely, not a smear of peanut butter was in sight. It was really just ordinary french toast topped with nutella and thick slices of banana – a snack that you could make at home for less than half the price here.

Fruit and nut bread was used instead though, giving the toast a bit more bite and chewiness. 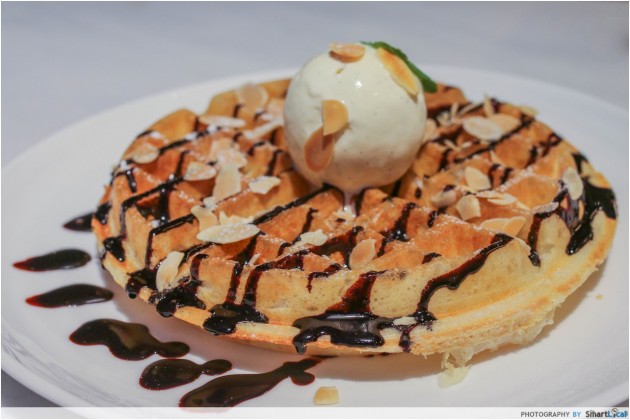 The Belgian waffles was something else altogether. Delectably fluffy and airy inside, they went impeccably with the vanilla ice-cream. To amp up the decadence, the entire dish was laced with a healthy drizzle of chocolate sauce.

Even though I was stuffed, the lightness of the waffles ensured that it secured a place in my tummy – and I sure was pleasantly contented that it did! 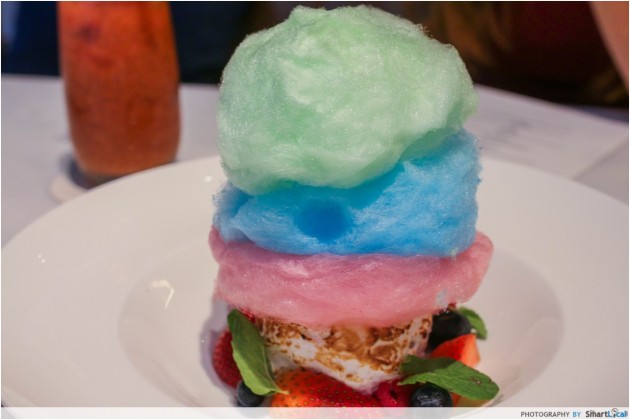 MMM’s carnivalesque take on the Baked Alaska substitutes the classic meringue jacket with a massive cloud of multi-coloured cotton candy, flambéd with a stream of Grand Marnier set ablaze. 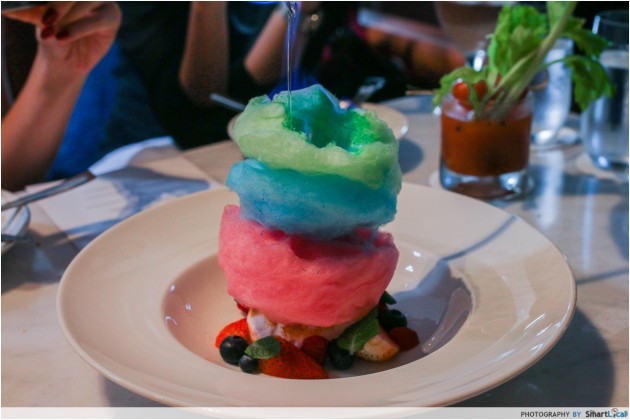 The teetering puff of spun sugar collapses into a blue-black puddle, leaving the dessert engulfed in a gently dancing blue-tinged flame that left us all with bated breaths. After the fire extinguishes, the ice-cream is speckled with globs of hardened candy, giving the creamy vanilla a hint of chewiness.

However, with just an impressionless skinny layer of sponge cake beneath the ice-cream and all the sugary gooeyness, this too-sweet treat becomes a pretty uneventful dessert after the initial pyrotechnic display. 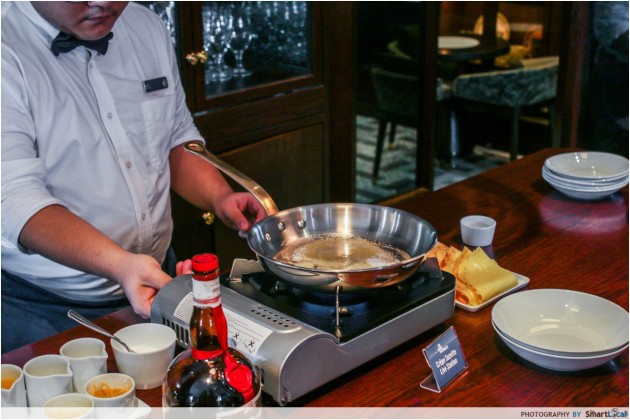 With the lights dimmed, the chef introduces yet another theatrical dessert – crepes on fire, quite literally.

He first sets the mood by massaging an orange-half into the sugar on the hot pan, releasing an uplifting aroma of citrus into the air. With the crepes immersed in a bubbling lemon-orange bath, Grand Marnier is splashed in and then ignited. Tongues of blue-orange fire lash upwards with flair, dying down into an easy blue flame, and slowly burning off. 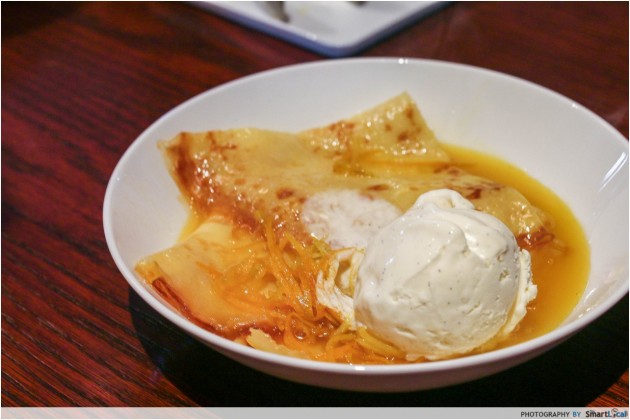 The silky crepes are slid into a large puddle of tangy broth on a plate, then topped off with lemon-orange zest and a scoop of ice-cream. Although the creamy vanilla was meant to counter the tartness of the dessert, it was still too sour for my liking, and no amount of ice-cream piled onto a bite could save it.

However, the frostiness of the ice-cream matched the warmth of the crepes rather well, creating an interesting sensation when savoured. 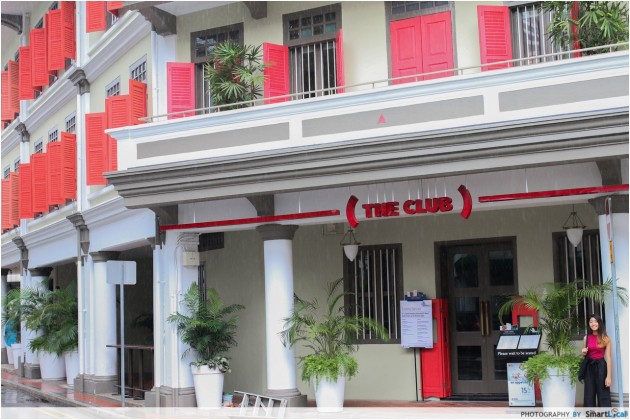 With its prices and classy interior, Mr and Mrs Maxwell’s is best described as a cafe for the upscale crowd – most probably catering towards ‘members’ (hotel guests) of The Club. However, if you’re just an average chap looking for some grub, then this isn’t the place for you.

Do come down just for their Adult Shakes and other desserts though – they are definitely something I’d highly recommend! 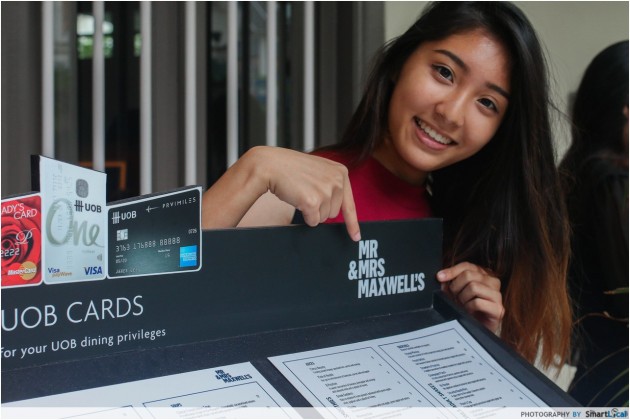 This post was brought to you by Mr and Mrs Maxwell’s.