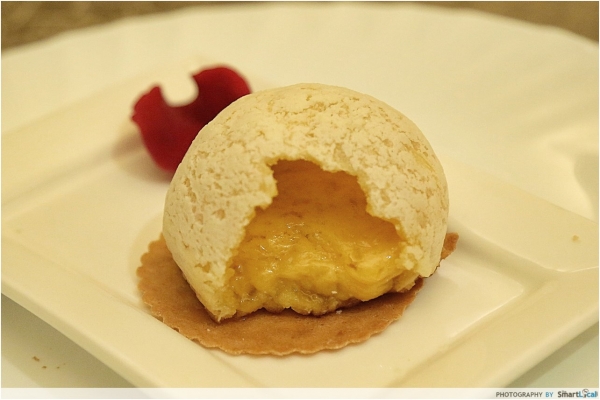 We weren’t expecting much when we visited Mouth Restaurant. In fact, we were more curious to check out one of the Amex 30licious $30 Deals that were going on – Mouth Restaurant was one of their participating outlets. Mouth Restaurants always seemed a bit too “cheena” looking to us and that’s probably why we never walked in before, although we’ve seen them around plenty.

What would they know about contemporary taste buds right? Oh how wrong we were.

With beginnings that can be traced back to the 80′s in Hong Kong, we learnt that Mouth Restaurant has been serving up Chinese cuisine in Singapore for the past 25 years. What began as a tea house, which catered to the Hong Kong community in Singapore serving up dim sum has evolved into an all-inclusive Chinese restaurant offering exquisite cuisine at a wallet-friendly price.

Presently, it has two outlets – one at China Square Central while the other is at Plaza Singapura. Now here’s a look at their food.

The Food at Mouth Restaurant 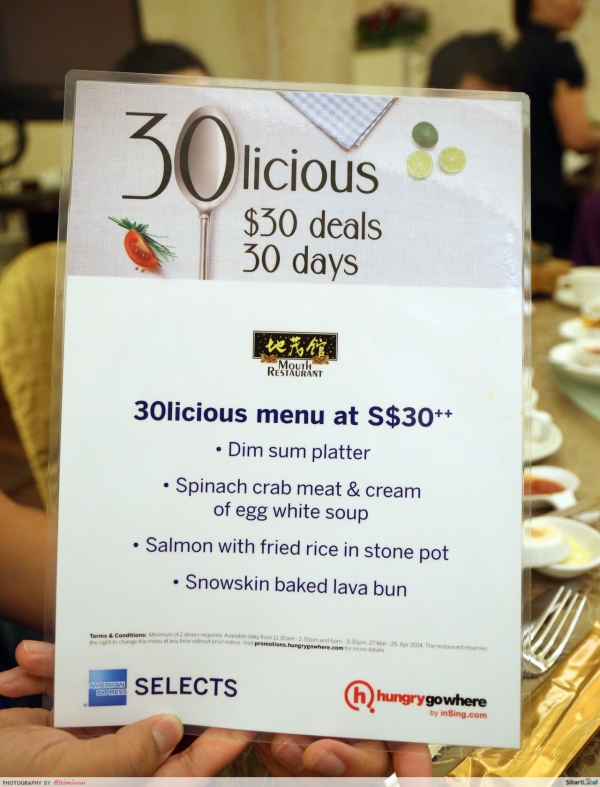 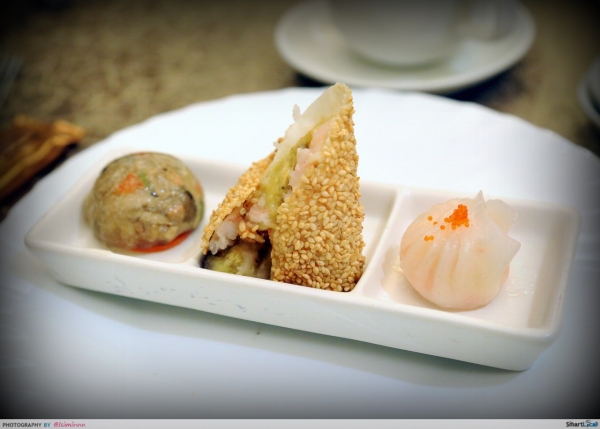 Their 30licious menu was a four course set.

The Dim Sum platter was the first dish to be served. While the Shrimp Dumpling and Mushroom dumplings were just average, both Bryan and I found the Banana Prawn Roll in the centre to be exquisite. It was crispy on the outside, and went well with the fresh prawns in the centred, wrapped with succulent fried banana at the sides. The sesame gave the roll a nice finishing fragrant touch.

If this dish is available on the À la carte menu, I’ll have no problem ordering a few plates of this and polishing them off on my own. 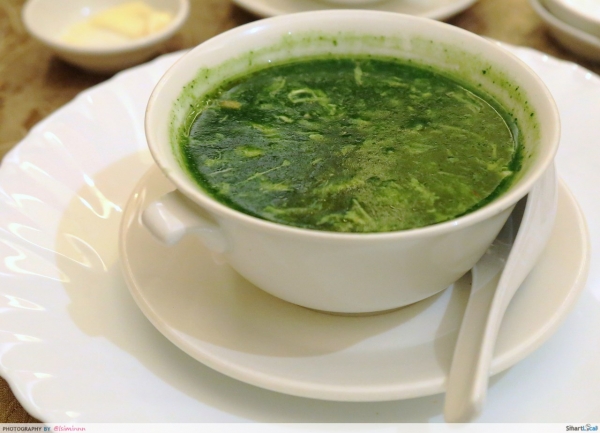 The second dish served to us was the Spinach crab meat & cream of egg white soup. Forgive us if we weren’t exactly thrilled when we saw this dish. Vegetables that green don’t appeal to us.

However, even though we weren’t huge spinach fans, we enjoyed this peculiar looking dish. Its green appearance may look intimidating, but the soup turned out surprisingly light and refreshing with no trace of the overpowering taste (and slime) spinach is known for.

It was paired so well with the huge chunks of crab meat. The soup looked so healthy and I think I consumed a week’s worth of vitamins just with this bowl of vegetable goodness. We looked around the table and everyone had savoured every drop of the soup. Not something you see often. 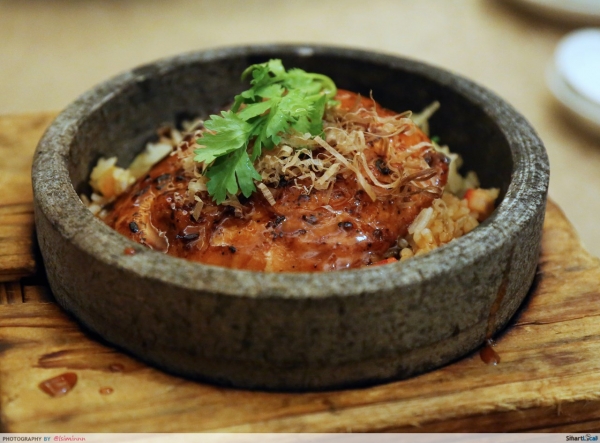 The 3rd dish was the Salmon with fried rice in stone pot. This dish is unique to the restaurant, as it is a self-created dish. All of us were salivating at the fragrant sizzling smell of the rice and salmon when it was served to us.

The salmon had such a heavenly taste – it was smooth and silky with a delectable special sauce. This special sauce created by the restaurant, coats the salmon, which is then baked slowly over a long time at a low temperature. Paired with the rice sizzling in the hot pot, this is another irresistible dish recommend. 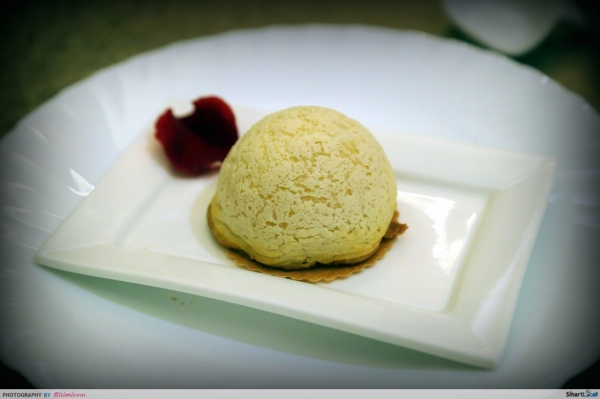 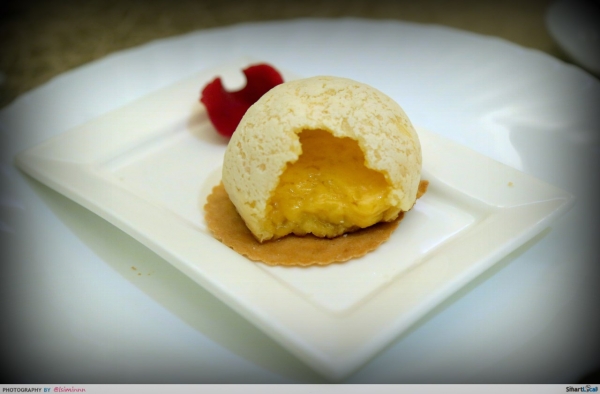 The final dish was the Snowskin Baked Lava Bun. I have no idea why they call it that weird name – I reckon it being named Legendary oven-baked Liu Sha Bao would have a better ring to it. It was my favourite dish of all. Most Liu Sha Baos are either steamed or fried. At Mouth Restaurant, they bake their Liu Sha Baos! We’ve never had a Liu Sha Bao like this anywhere else and we’re now convinced this is the best way to make Liu Sha Baos.

The fact that it was baked gave the exterior of the bun a very thin and crispy like layer, yet solid enough to hold the goodness within. The custard lava inside took on the resemblance of molten gold, and came gushing out piping hot.

We both agreed that this was the best Lia Sha Bao we had in Singapore. Even our dining companions said so too. The a-la-carte price for these Liu Sha Baos are just $5.80 for 3 and I can see Liu Sha Bao lovers da baoing a whole crate home.

Mouth Restaurant really surprised us. It was the best tasting we had been to in awhile, and we go for a lot of these tastings. Nearly every dish on the 4 course set menu was excellent, and even when the promotion ends, we’ll definitely be back coming back again and again for their Liu Sha Baos.

You’ll be really happy to know you can enjoy this meal at just $30. American Express and HungryGoWhere are currently running a 30licious – $30 culinary treats promotion and Mouth Restaurant is one of the participating outlets. This will run for 30 days from 27 March to 25 April 2014.

We can’t guarantee the other participating restaurants will be as good as this. The only downside was how hard it was to find this place, it took us 15 minutes! Now that we know, its just opposite Hong Lim Complex so use that as your landmark.

30licious is the latest culinary celebration by American Express Selects® – American Express’ way of extending specially curated deals to its Card Members. To enjoy the delectable 30licious deals, you simply need to log on to promotions.hungrygowhere.com (available from 27 March 2014) to make your bookings and pay with your American Express® Card.

I am sure everyone has a friend or at least knowns someone with an American Express card. But if you do not, non card-holders can still enjoy this promotion at a price of $35 with other modes of payment.

Getting to Mouth Restaurant 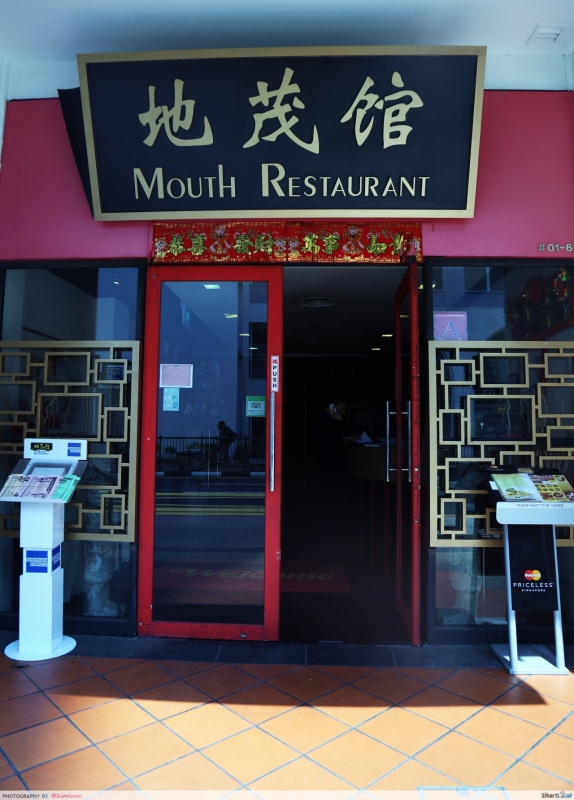 This post was brought to you by American Express.