Most of us are familiar with the mischievous Monkey King from the Chinese epic Journey To The West. This well-loved story is Wild Rice’s Christmas pantomime for the year, albeit with a local twist.

Written by Alfian Sa’at, the plot revolves around Ah Tang (Joshua Lim), a Sec 3 schoolboy who lives with his Aunty Fanny (Chua Enlai) and Uncle Moo (Lim Kay Siu) after his mum passed away. He also feels overshadowed by his cousin Xiao Hong (Kimberly Chan), who is an overachiever and wins lots of prizes for her various talents. Because of this, Ah Tang feels left out and that his adopted family doesn’t love him at all.

To escape from them and get some inspiration for his homework, he heads to Haw Par Villa, meets the titular trickster, and gets sucked into an epic adventure after being mistaken for the monk Tang Sanzang.

The plot is a pared down and close relative of the classic, replete with Singlish, cheeky jibes at Singapore life and culture, as well as sexual innuendo — it might appear to be a children’s show on the surface, but will also appeal to the young at heart. As the show opens, we are treated to a lavish and detailed set that depicts the Heavenly Palace — we see four golden dragon pillars and watch as Guan Yin (Siti Khalijah Zainal) traps the Monkey King (Sugie Phua) under a mountain for 500 years.

The backgrounds that transition from one scene to another are inspired by ancient Chinese paintings, and the characters’ movements take after Beijing opera and Wushu. There is also Indonesian shadow puppetry included in the scene where the Monkey King and King Bull “transform” into animals.

I could go into detail about how the costumes are inspired by the Tang dynasty, where the original tale is set in, but that’s not what brings the play to life. The actors interact with the audience, with Princess Iron Fan telling everyone to diam (keep quiet) when they tell her that she is ugly. We warn Ah Tang when a tiger is behind him, and we tell the Monkey King to transform into a fearsome tiger to defeat King Bull (Lim Kay Siu) towards the end of the show.

Monkey Goes West also shines the spotlight on Pigsy (Frances Lee) and Sandy (Siti Khalijah Zainal), two characters often neglected in other productions. Introduced through song, the audience quickly takes to and roots for them. Special mention goes to both Frances Lee and Siti Khalijah Zainal, who, as actresses, made the traditionally male roles their own.

Of course, the Ah Beng-like Monkey steals the show, although Chua Enlai’s funny gaffes of mispronouncing words in ridiculous ways will leave you in stitches. Come to think of it, Haw Par Villa really is something of an “abusement park”. 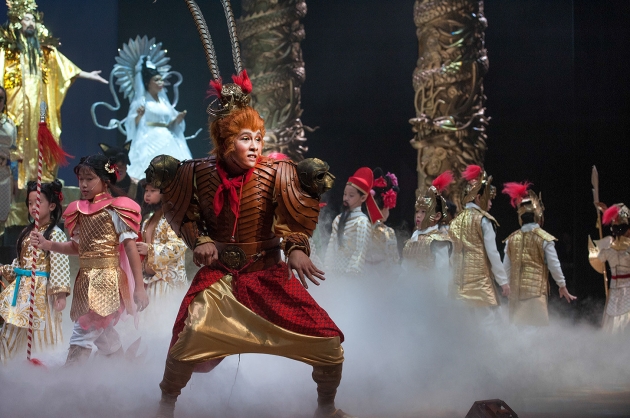 There’s never a dull moment as the cast is made up of strong actors who pull off dual roles with ease —  Chua Enlai as Princess Iron Fan and Aunty Fanny, Lim Kay Siu as Uncle Moo and King Bull, and Siti Khalijah as Guan Yin and Sandy.

Our only misgiving is that Ah Tang’s personal journey is hurriedly resolved at the end and not consistently built up throughout. However, the funny moments, energy, and amazing soundtrack make this Christmas production great — especially if you’re a Grinch during this time of the year.

Monkey Goes West is a hilarious, side-splitting show that will leave its audiences wanting more after the final curtain call. This production is for tricksters and law-abiding citizens of all ages, regardless of whether you’re a fan of the Chinese epic.

Monkey Goes West is in theatres till 13 December 2014. You can get tickets for it here.

This post was brought to you by Sirius Art PR Pte Ltd and Wild Rice.