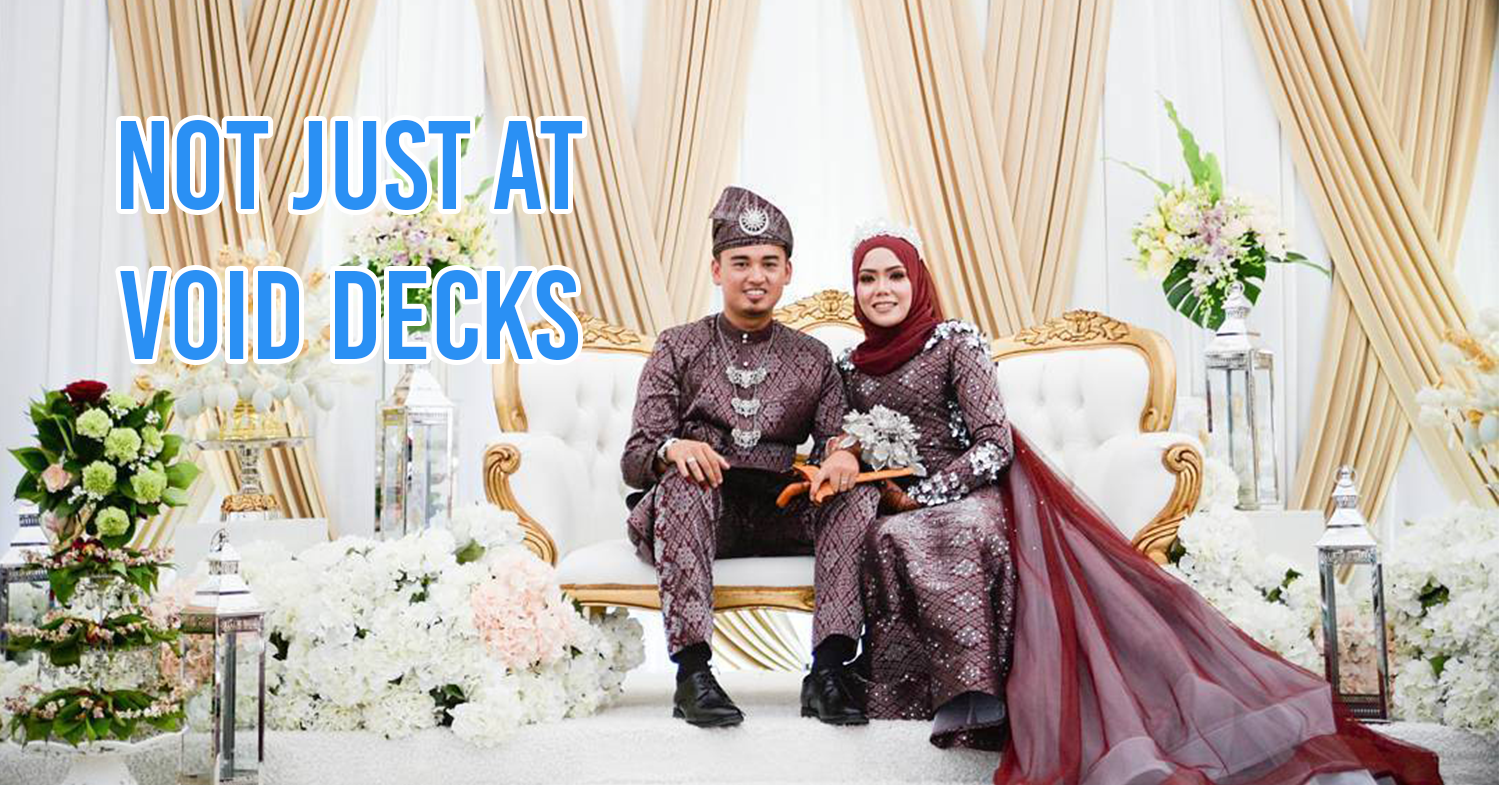 It’s bound to happen around once a month, or even more frequently during the holidays. You will walk pass a Malay wedding at a void deck and you’ll notice the grand wedding dais, smell the fragrant aroma of nasi briyani and subconsciously match your walking pace to the beating of the kompangs.

Here are some Malay wedding customs explained so you don’t have to be paiseh about asking your Malay friends about them the next time you attend one.

1. Angbao amounts vary according to venue 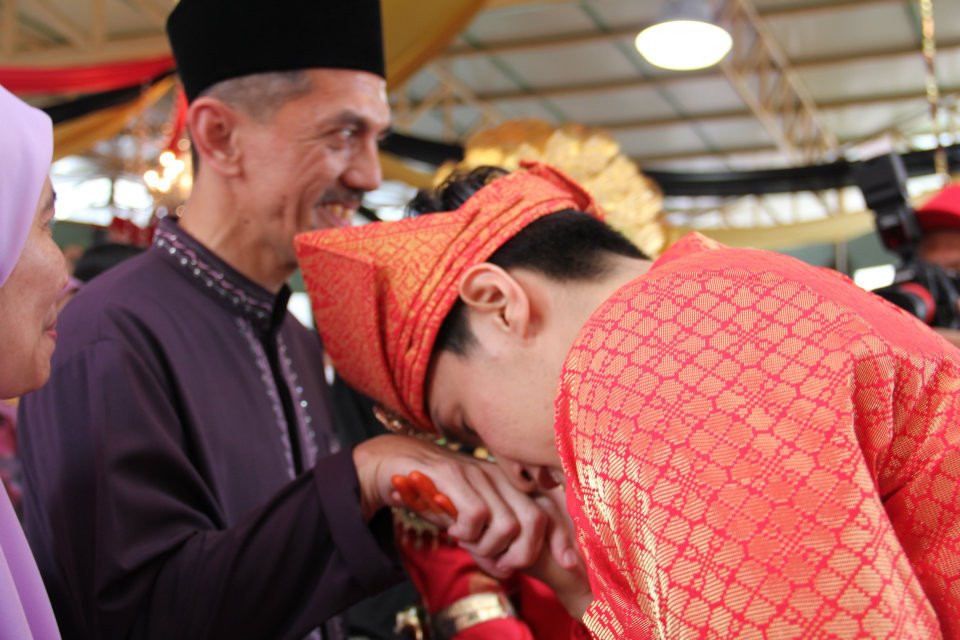 There is no moral obligation to pay for your seat and the accompanying meal at a Malay wedding, nor are there any auspicious amounts to follow.

It’s all about the spirit of giving and the celebration of two people in love. As a general guide, a good amount to give would be from $10-$30 for void deck weddings, $30-$50 for country club receptions, and $50 or more at a hotel.

If you’re wondering why there’s no need to hit the triple digits even at a hotel, it’s because there’s no fixed guest list – people come and go throughout, so you’ll be in for a chaotic but lively experience.

2. Engagements are pre-planned and involve a ceremony with both families 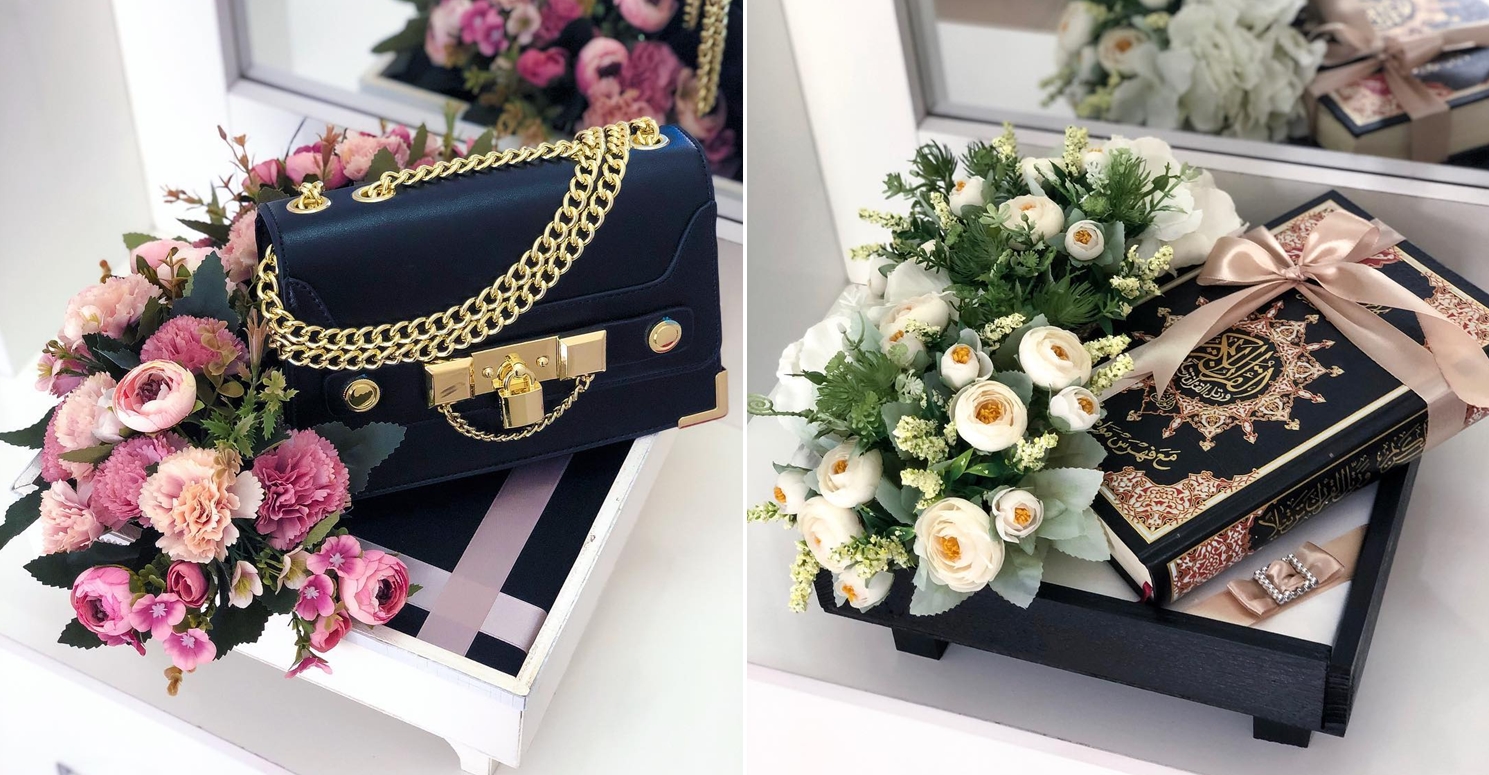 Unlike the surprise flash mob proposals that some of us dream of, traditional engagements in Malay culture are a formal pre-planned process led by the parents of the couple. 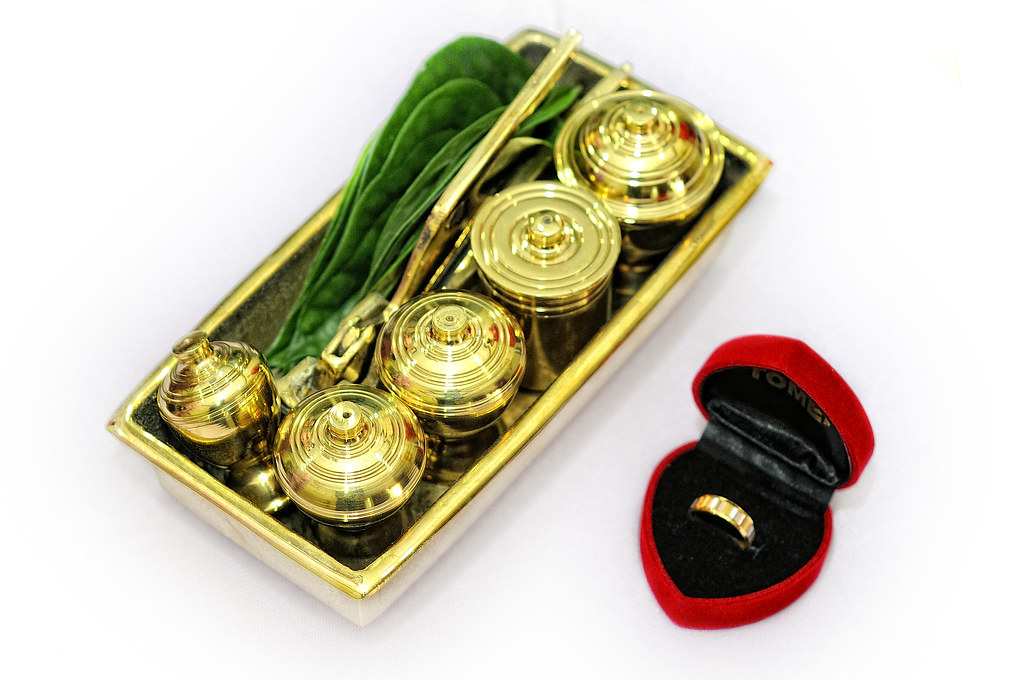 Respected family members of the groom’s will visit the bride’s home bearing trays of gifts in odd numbers of 7 or more. These can include handbags, shoes and religious paraphernalia. The groom’s family will then present a dowry in the form of a gold ring and a betel-leaf arrangement with little jars of potpourri, known as tepak sireh. This is to mark the beginning of a pleasant exchange and represent the bond between men and women. 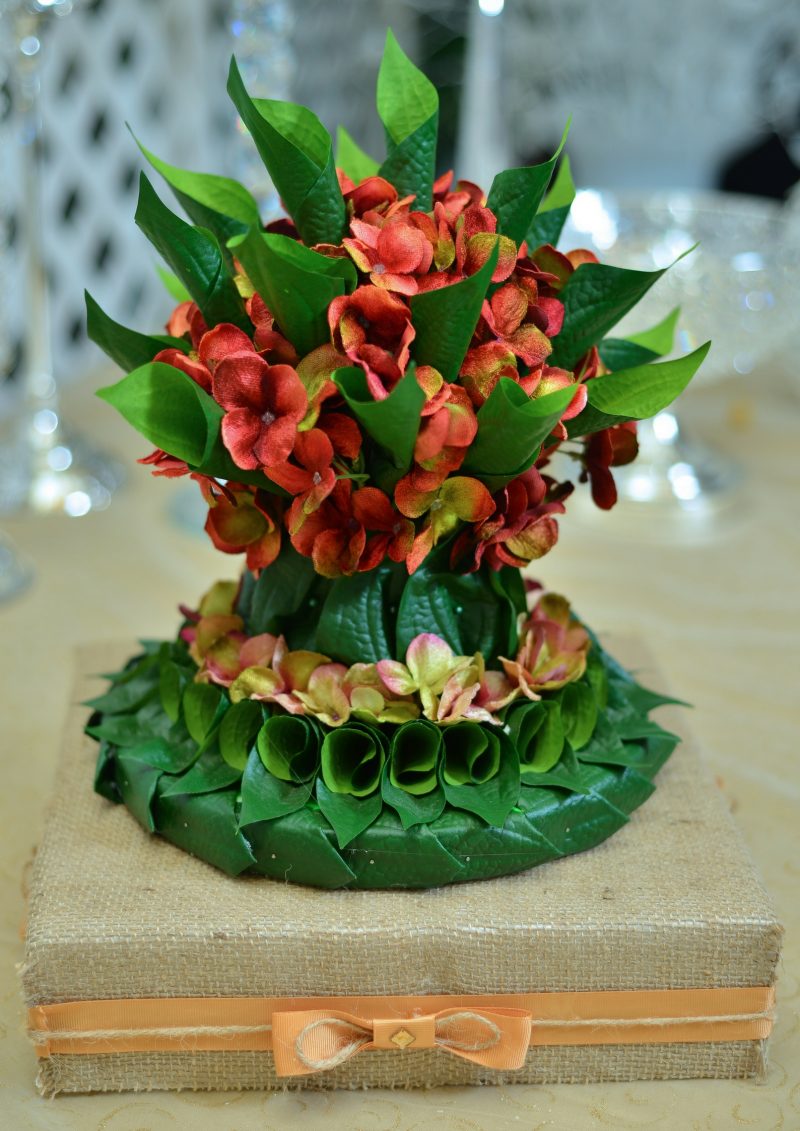 It is also customary that the bride’s family returns the same number of items to the groom’s. You can expect to see similar items but what will differ is how the betel leaves are arranged – the bride will return a sirih junjung, essentially a three-tiered version, to represent the couple’s overflowing love for each other. 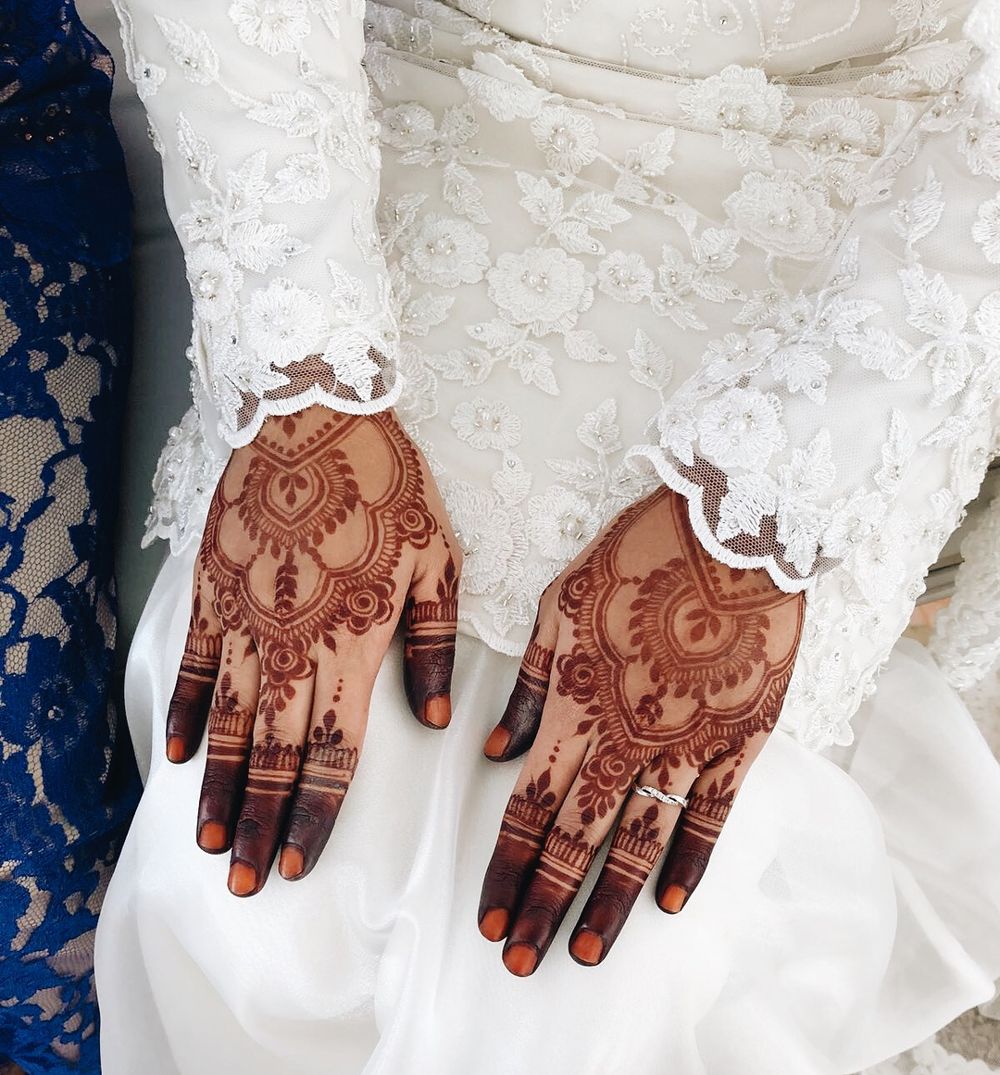 No wild nights out with the girl gang here – in Malay culture, hens nights are in the form of an intimate henna party in the bride’s home, with the whole bride tribe leaving with fancy designs on their hands and arms.

Rooted in Hindu culture, the intricate henna stains donned by the bride and her bridesmaids just a few days prior to the wedding are not just an accessory.

The designs are carefully selected to repel evil spirits. The details in her palms are meant to guard her and the ones on her feet are to make sure that she doesn’t walk away from the groom. To put it simply, it’s all about welcoming positivity and good luck.

4. Receptions are typically held at void decks, but don’t necessarily have to be 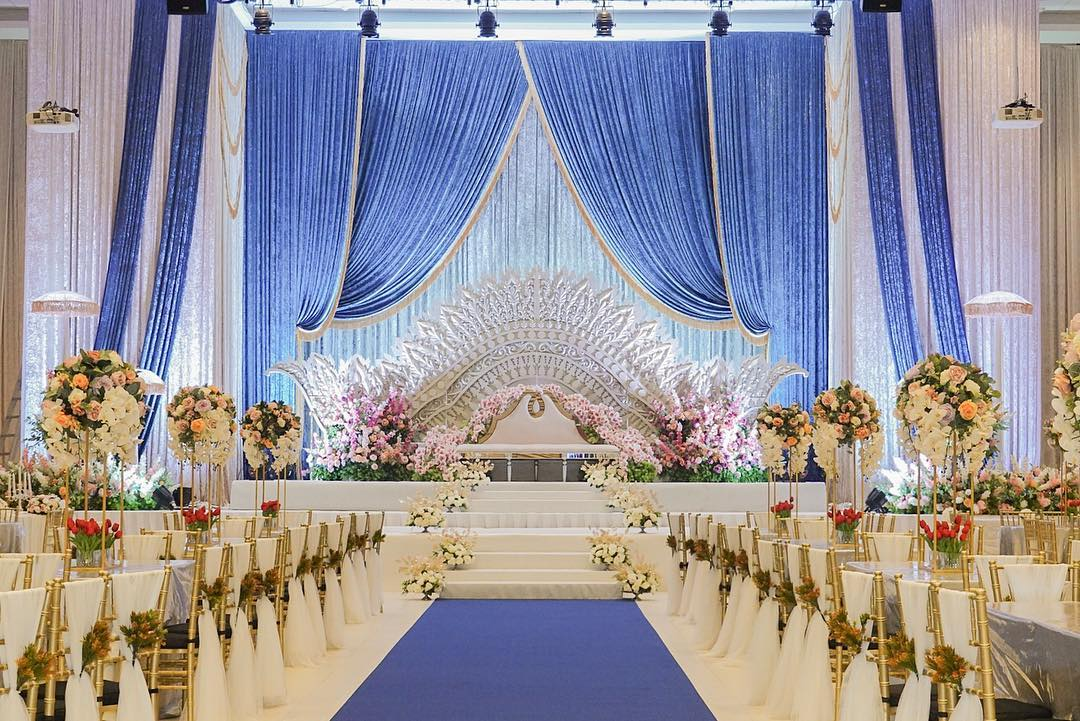 We’ve seen it too often that we instinctively associate Malay weddings with the void deck. It may be a cheaper alternative than a hotel ballroom, but what’s more important is how these weddings are remnants of a forgotten kampung tradition. 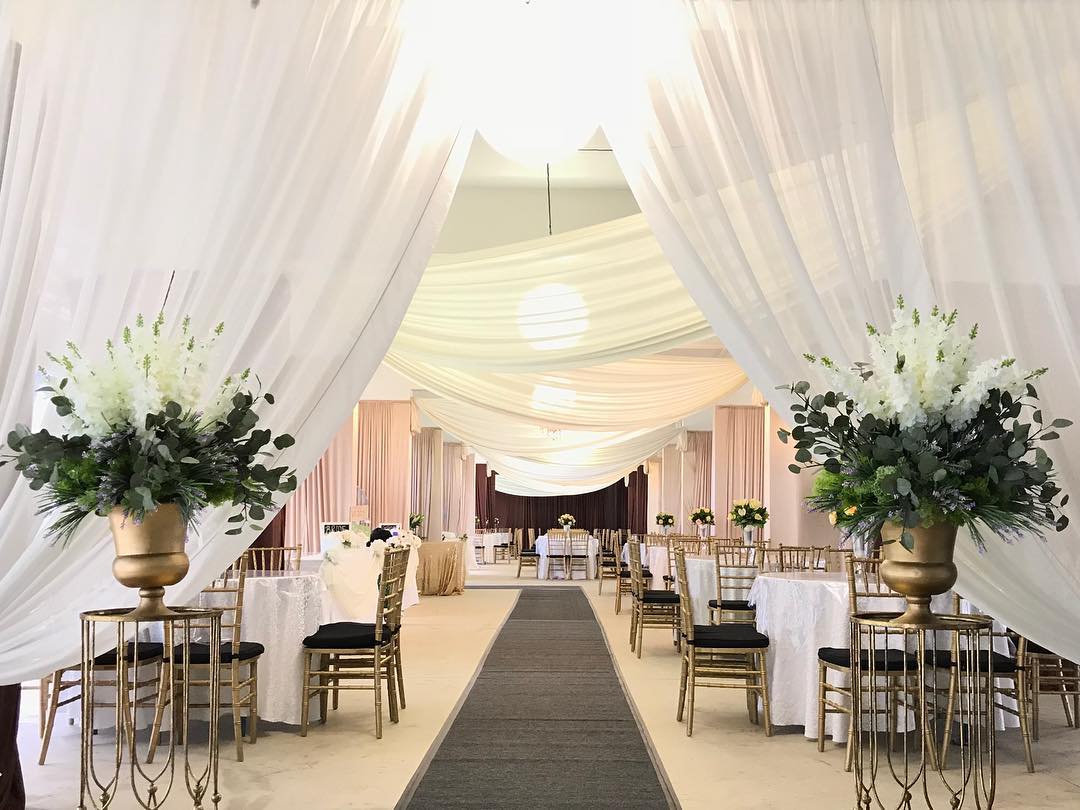 It’s the gotong royong (communal) spirit that families want to foster with the openness of void decks, which can not only easily accommodate a large crowd of relatives and friends, it also allows them to come and go as they please or gather freely into the night. 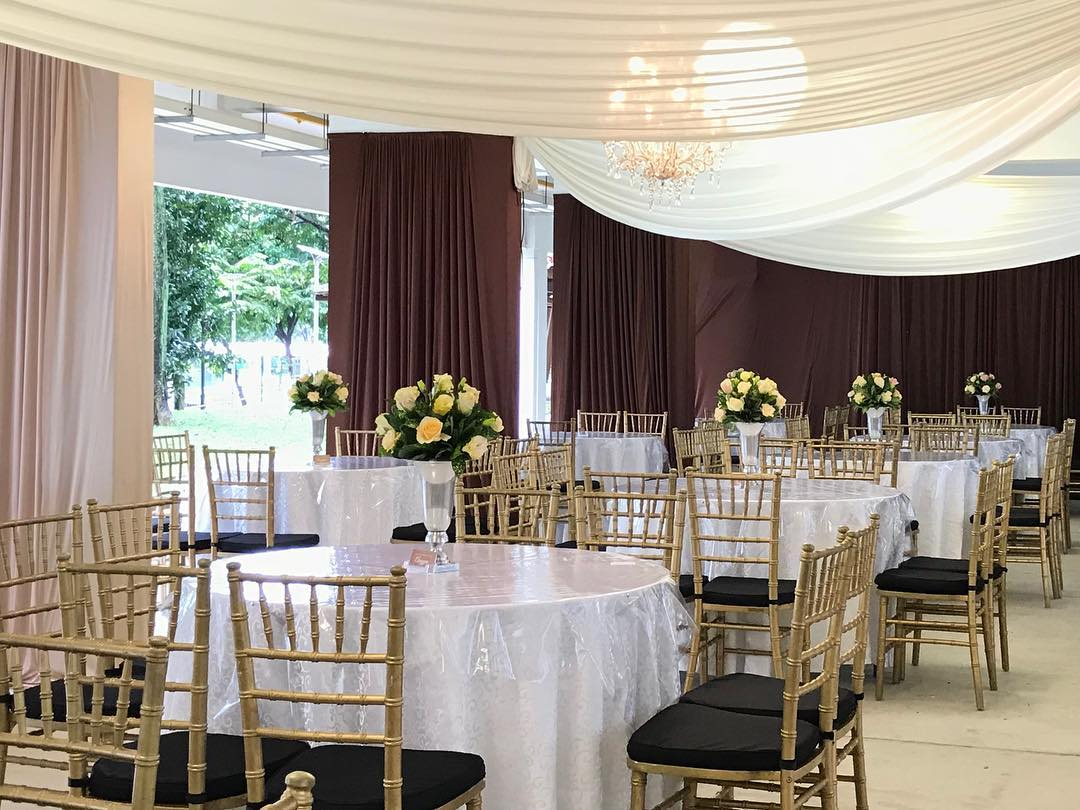 These days, an increasing number of modern young couples opt to host their receptions at function rooms for more exclusivity – and to escape the unbearable heat. One thing that remains the same, however, is that flexibility where guests can arrive or leave any time they wish.

5. There is no belief in unlucky colours so you don’t have to avoid wearing black 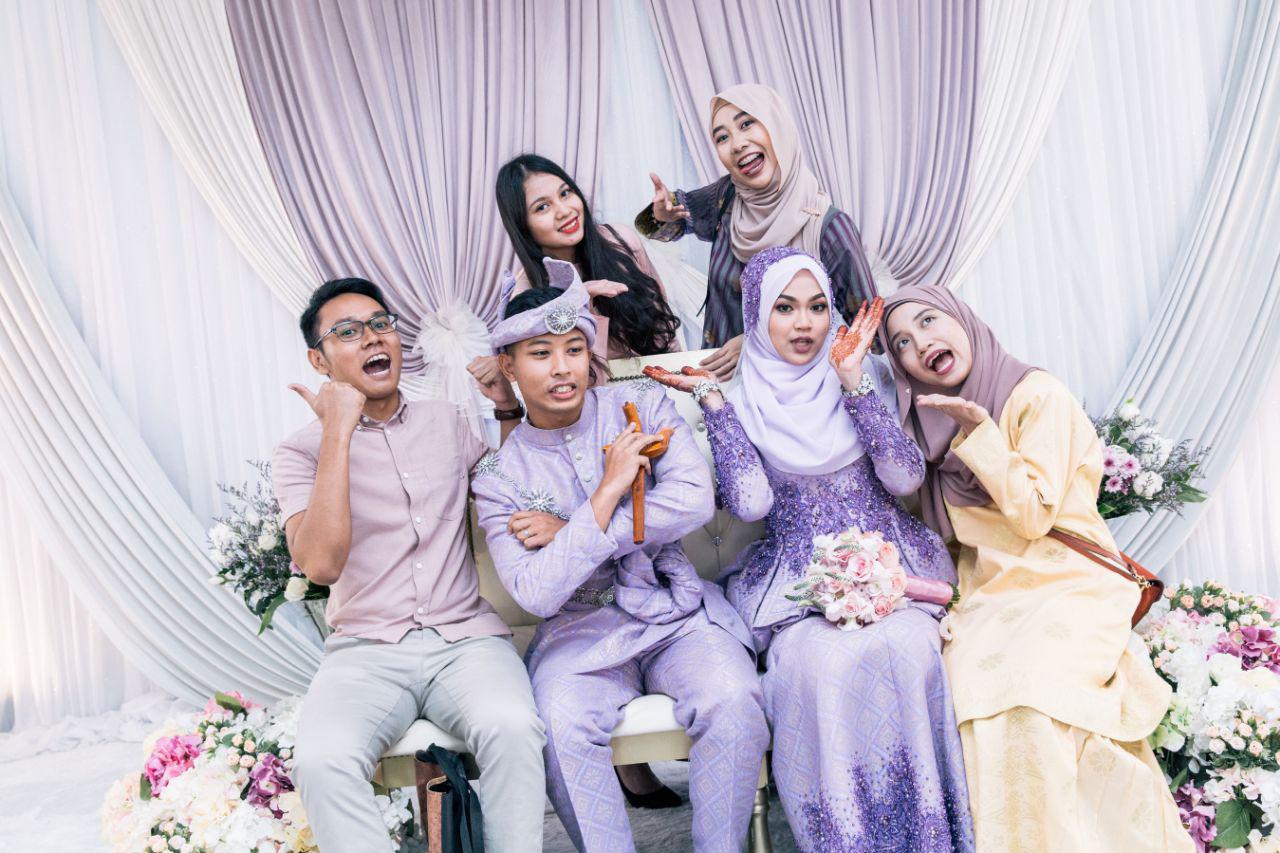 Unlike weddings in different cultures, turning up to a Malay wedding ceremony in black or white is not taboo. In fact, it’s totally fine to strut in any colour from the brightest orange to the dullest green because there is no belief in superstitious colours.

What you’ll have to take note is to avoid wearing revealing clothes as a gesture of respect to the family. A safe bet would be to don Malay traditional wear if you’re able to borrow any. Otherwise, a smart-casual dress code works too.

If you’re attending the solemnisation ceremony and it happens to be at a mosque, you will have to take extra effort to dress conservatively. For females, although it’s not compulsory, you’re encouraged to have a scarf loosely wrapped around your head.

6. The “gatecrash” or hadang traditionally involves a poem exchange 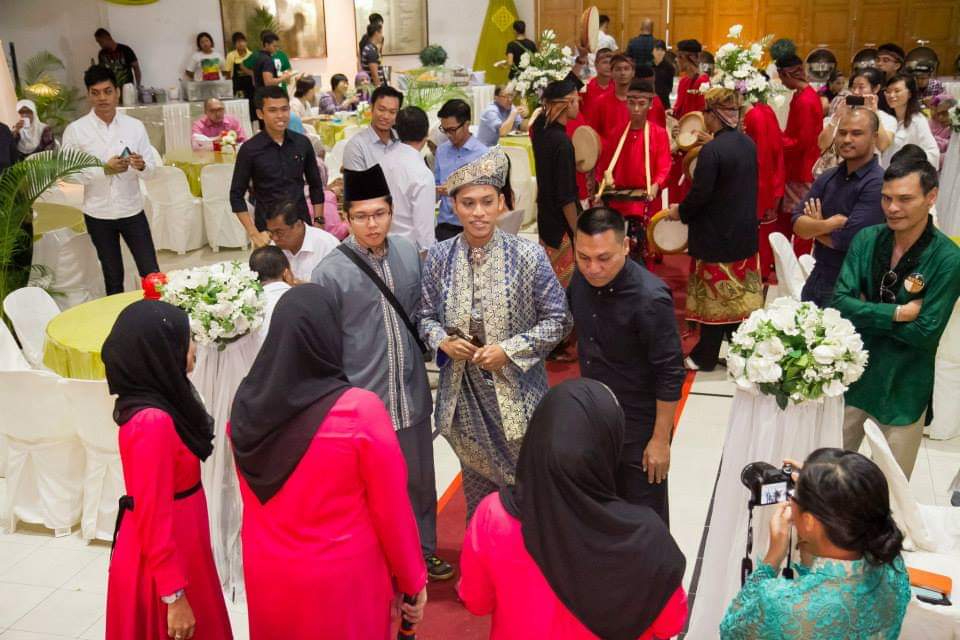 It’s not always smooth-sailing in any marriage and that’s why every groom’s march in is intercepted by the bride’s girl gang in a hadang, or what most know as the gatecrash, where he has to go through a series of obstacles.

To start off, a pantun or Malay quatrain is sung with love confessions in classic Hang Tuah fashion. This genre of Malay literature has long been embedded in Malay culture to express delicate emotions and strengthen relationships. These days however, couples tend to jazz it up with Singlish to make it more lighthearted.

But of course the fastest way to appease any bridesmaid is to give them a thick angbao and put on a quick show with some silly dancing.

7. The groom’s entrance is accompanied by a drum-beating procession known as kompang 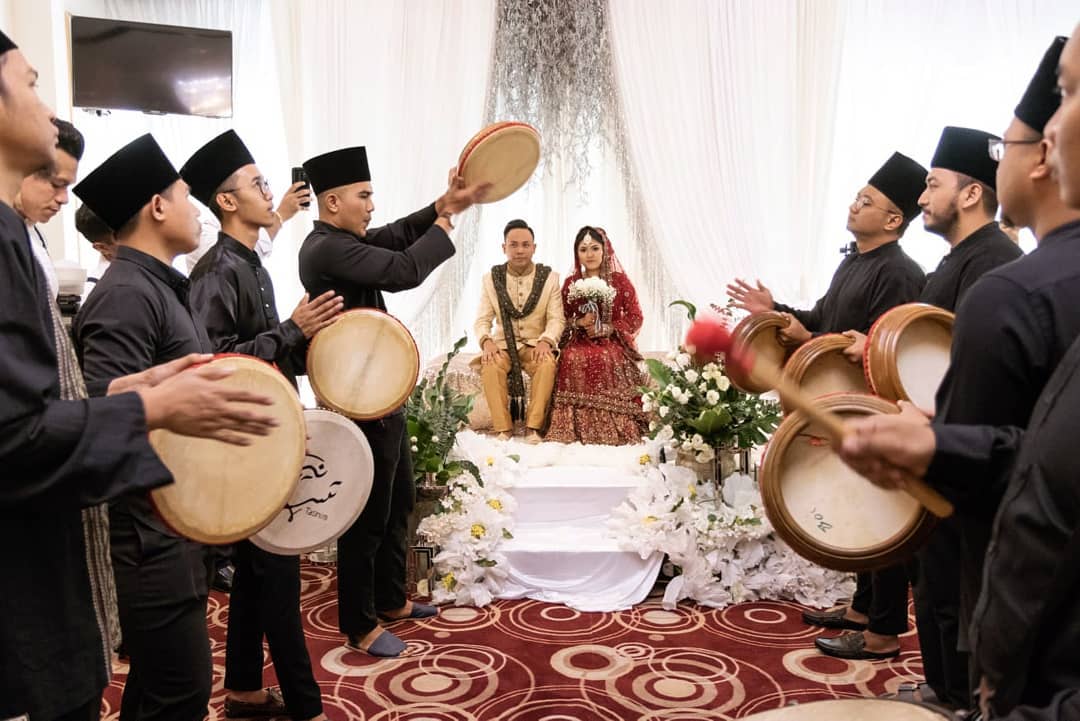 For church weddings, men wait for their ladies to walk down the aisle. But in Malay culture, the groom will strut in his baju kurung onto the red carpet, following the pulsating beats of the kompang – a handheld drum played by a band of at least 10 men. With that loud rhythm replacing the cheerful chatter of guests, the groom’s arrival is sure to be unforgettable. 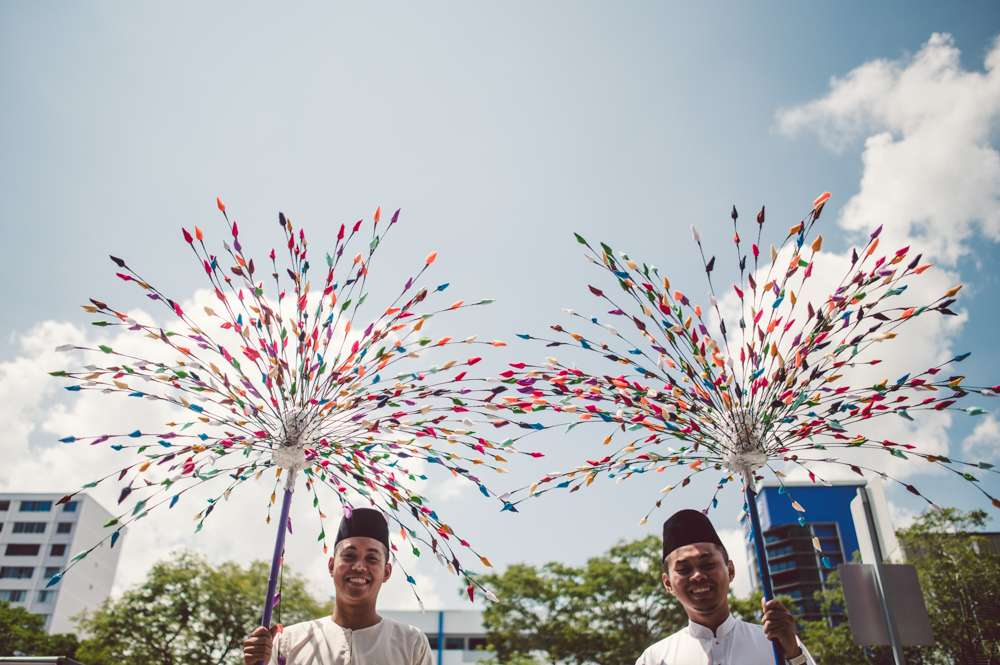 You’ll also notice that the groom is guarded either by bunga manggar – palm-shaped decorations made from colourful tinsel on bamboo poles – on his sides or a traditional umbrella. The former symbolises prosperity and fertility and if placed outside of the ceremony location, it can also double up as a directional marker. 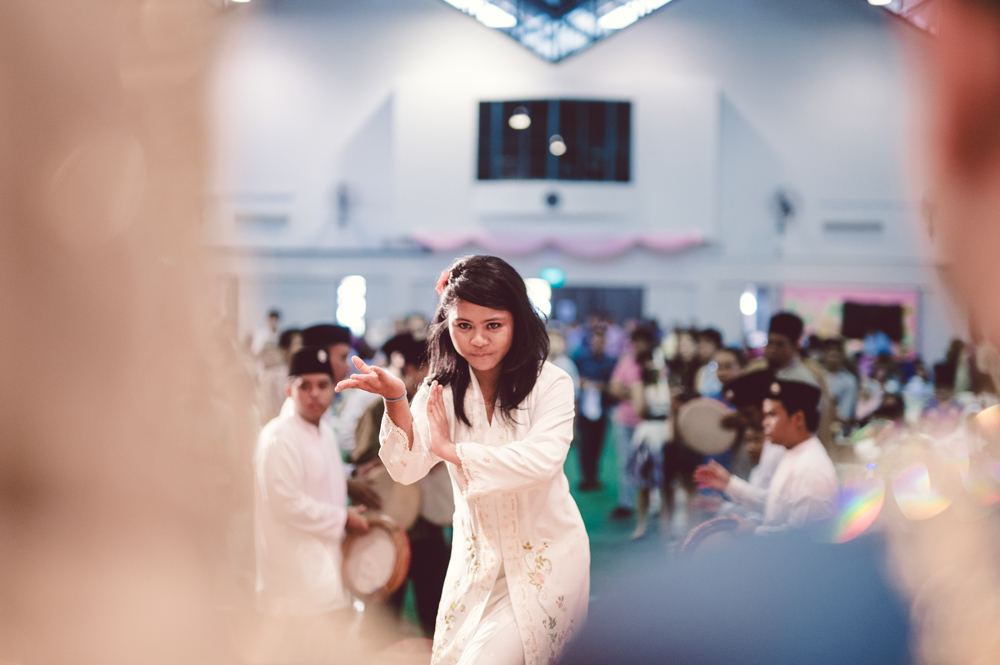 When the couple finally unites, they will then be graced by a silat pengantin performance or an elegant adaption of the Malay martial arts form. This is usually performed by guests or relatives as a sign of respect for the couple.

8. The couple sits on a “throne” and is treated as king and queen for the day 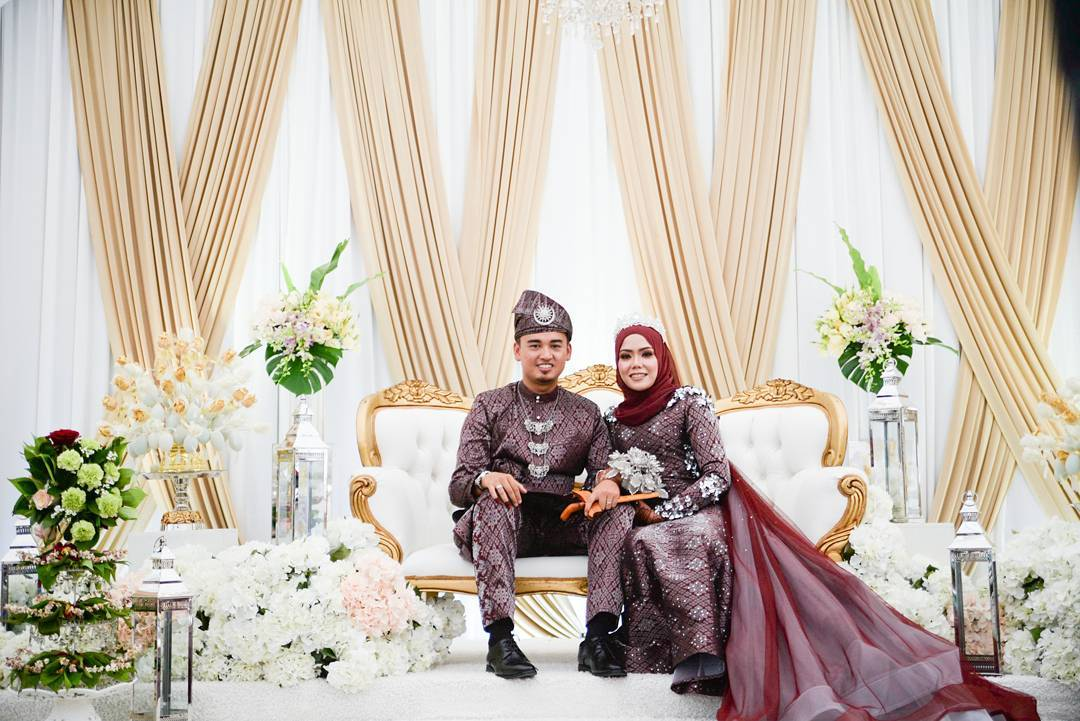 The anchor point of any Malay wedding would be the wedding dais that’s almost always grandly decorated. This is where the bride and groom awaits blessings and well wishes from their invited guests when they come forward for a picture. 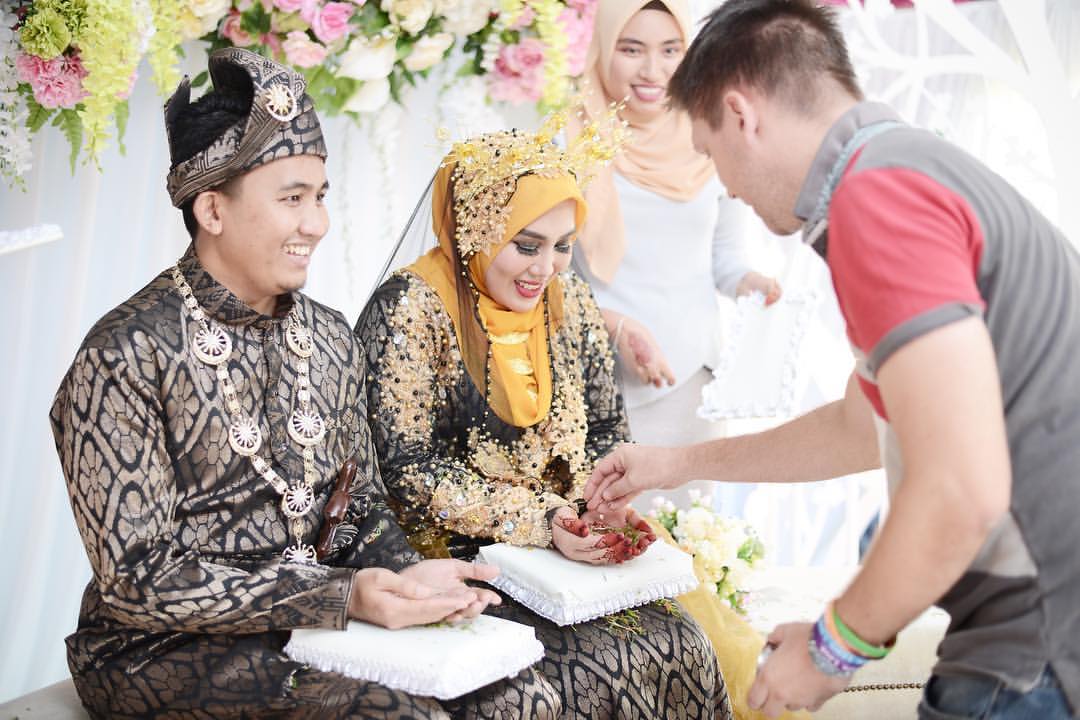 This enthronement is however incomplete without the sprinkling of rose water and rice grains onto the couple by respected family members. This signifies the cleansing of the couple before it concludes with the placement of potpourri into their palms.

9. Food items which carry various meanings are used during the ceremony

Besides the usual ensemble of nasi minyak, ayam merah, and sambal goreng pengantin in the buffet spread, there a few ceremonial dishes you can only find at a festive Malay ceremony. 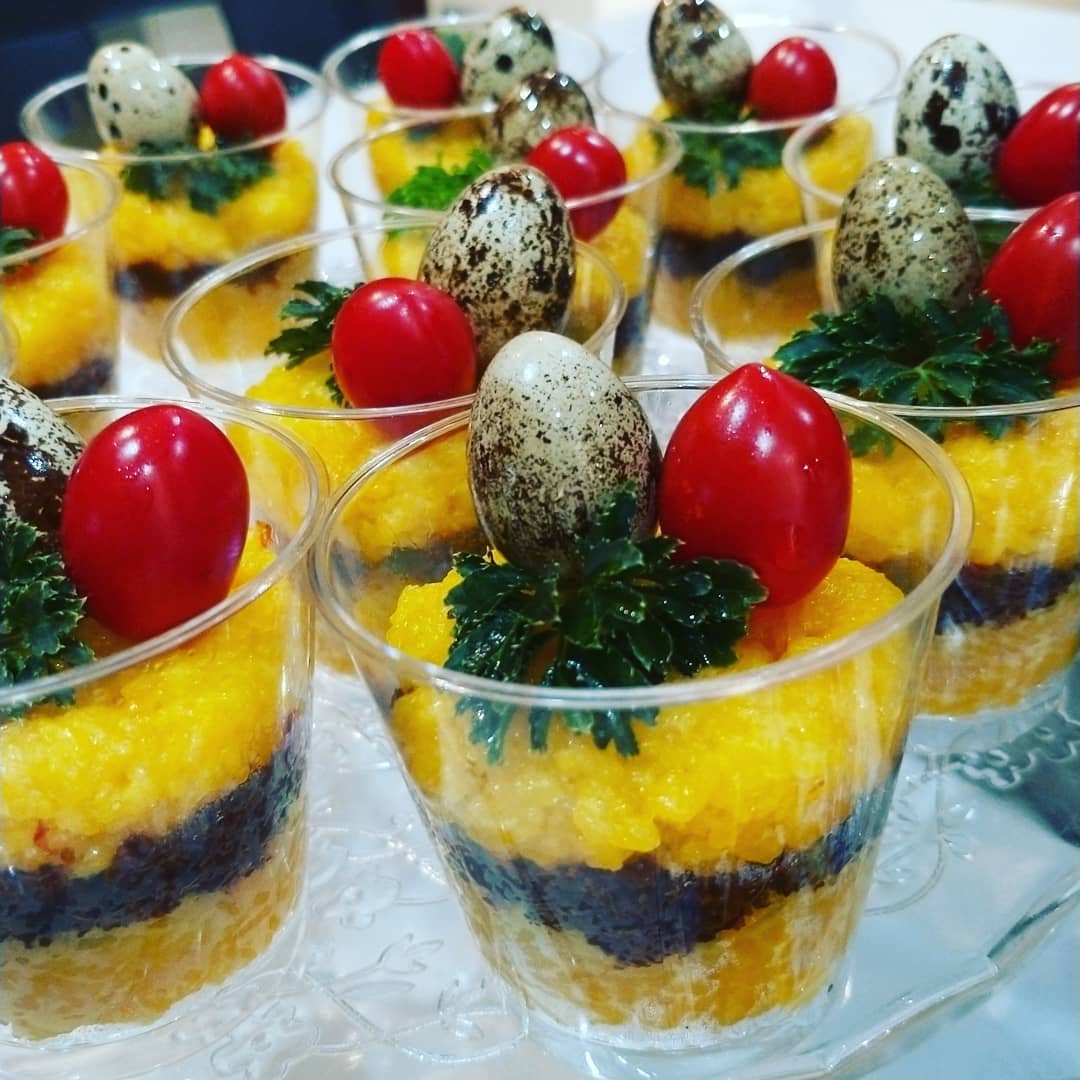 Cooked in coconut milk and turmeric, nasi kunyit is a yellow glutinous rice fed to the bride and groom on the dais. The colour yellow in Malay customs is often associated with good fortune, wealth and royalty. 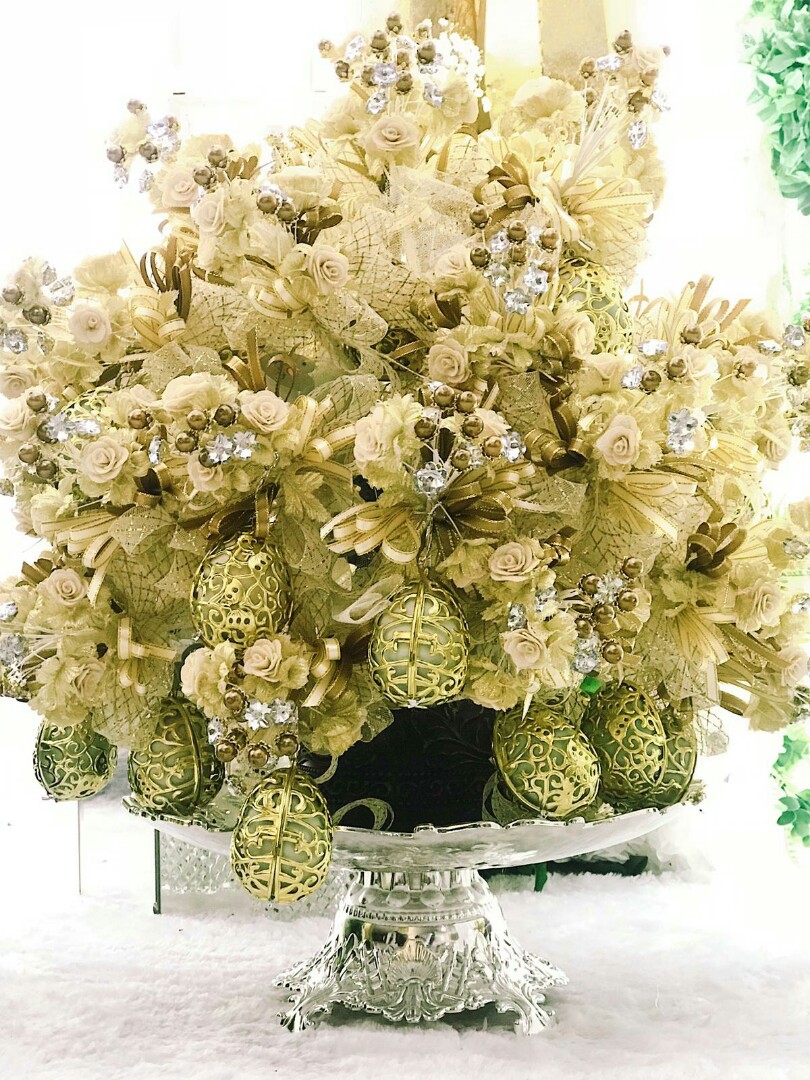 There’s also bunga telur, which literally translates to “egg flower” – hard-boiled eggs wrapped with artificial flowers. It is a sign of fertility and is usually gifted to guests who perform the dais ritual and bless the newly wedded couple. 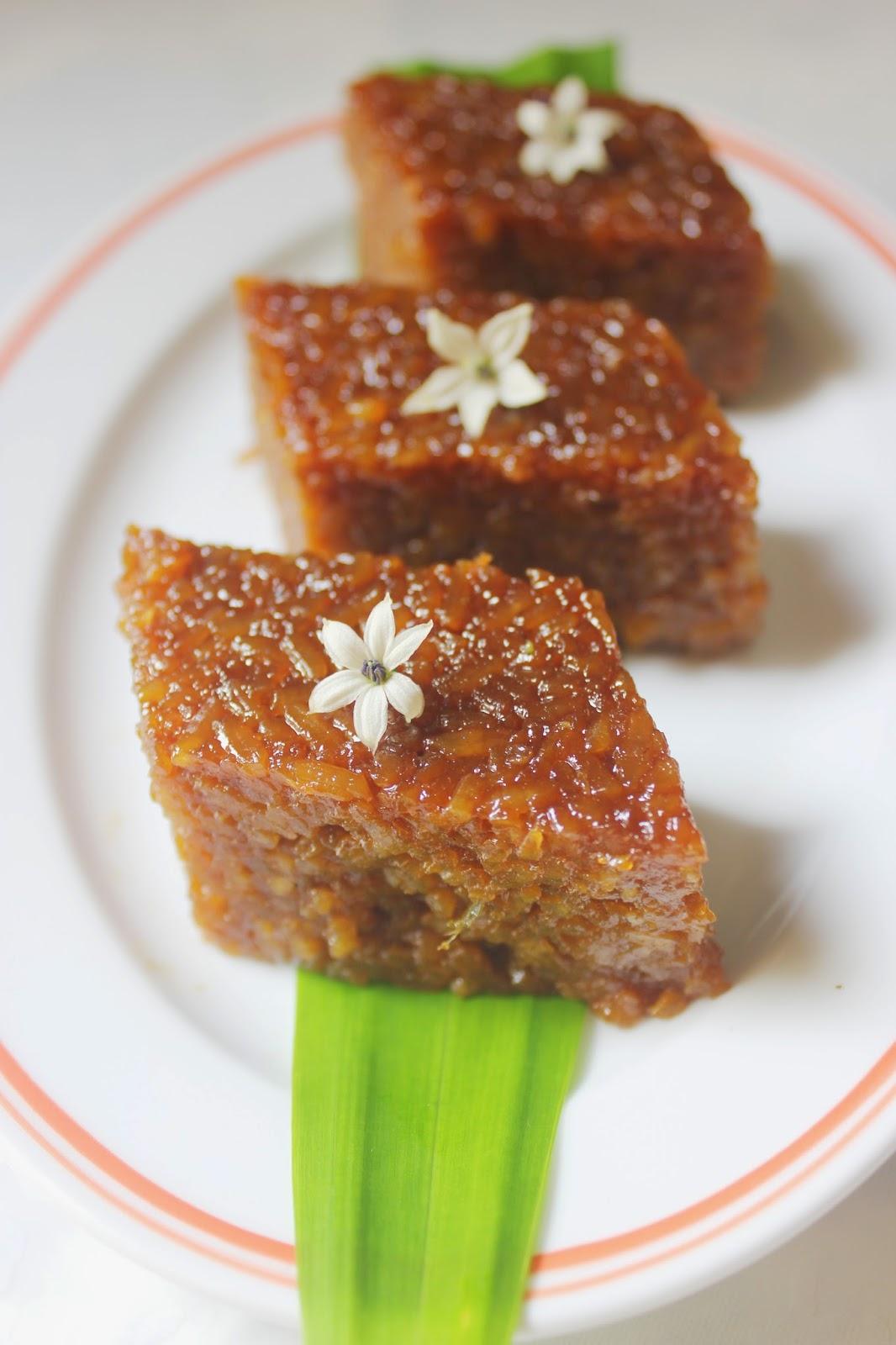 Close family members will get to bring home wajik, a sweet glutinous rice dessert made with a mixture of palm sugar, coconut milk and pandan leaves, and shaped into a diamond. 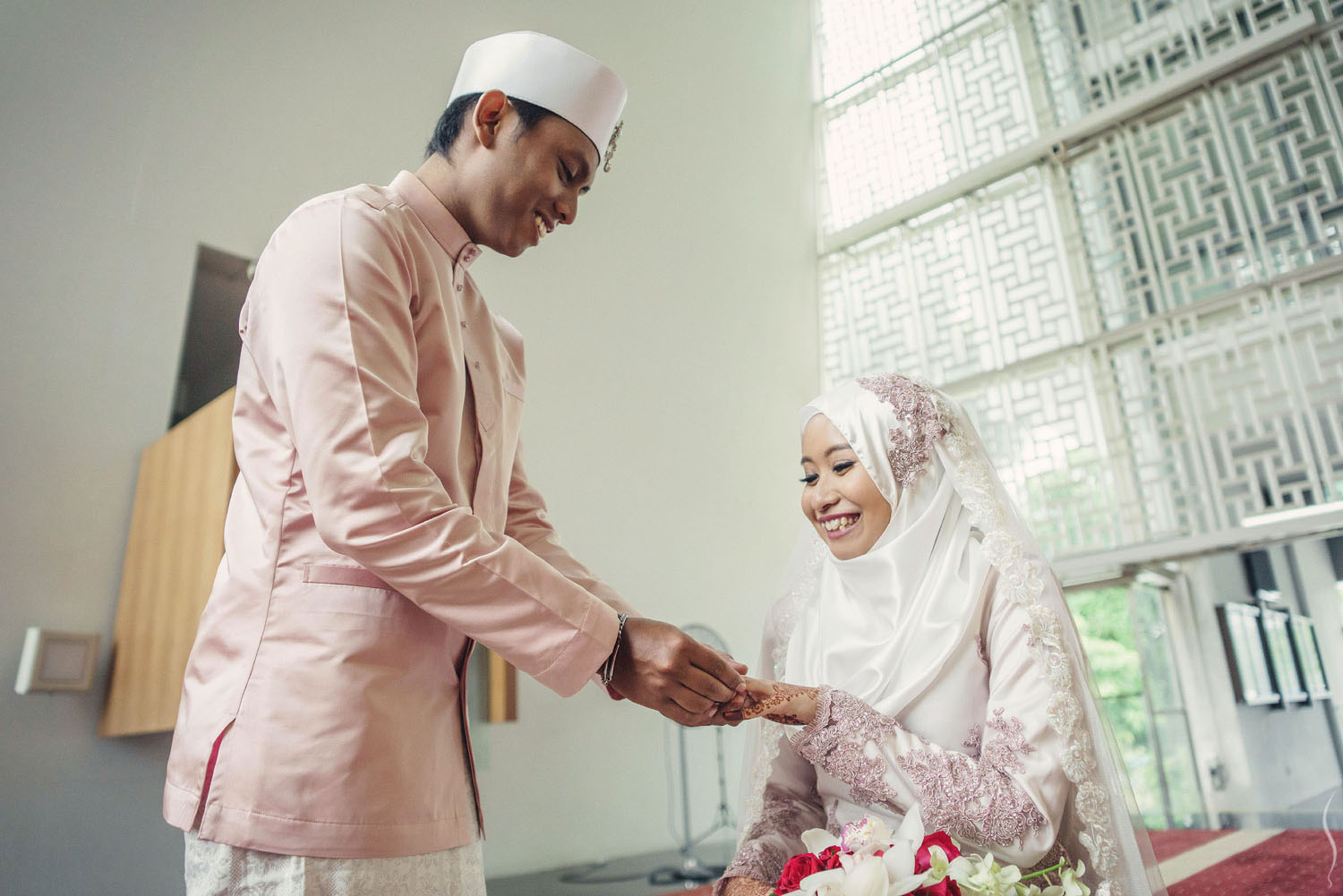 Attending a different culture’s wedding can be daunting when you’re unfamiliar with their practices. But with this short guide, you can now attend your next Malay wedding with confidence, knowing the meaning behind everything that’s going on during the ceremony. 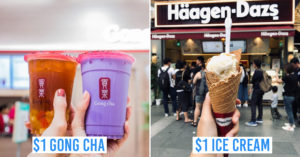 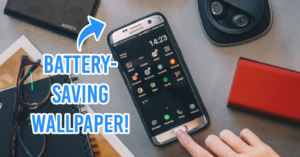