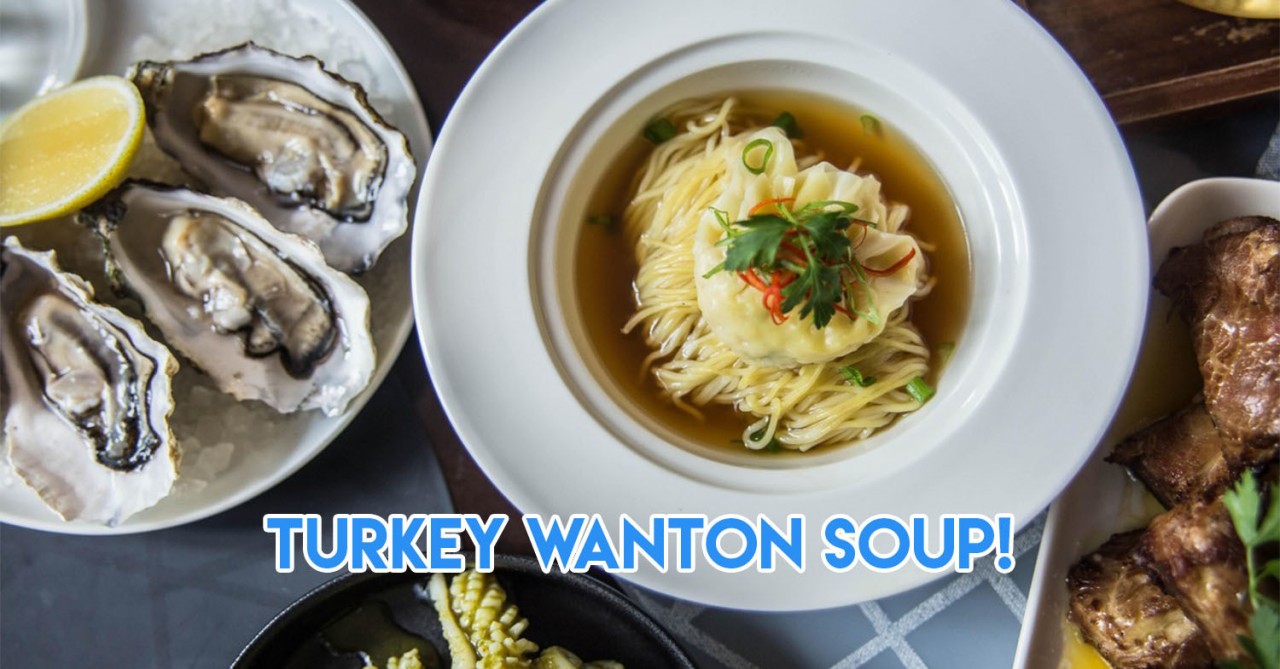 One thing I love most about my family is our devotion to celebrating every occasion with big meals. However, something that I find hard to appreciate is my parents’ loyalty to Chinese food. While I count myself a big fan of xiao long bao and stir-fried noodles, I like my pizzas and french fries a lot more. This clash often results in our pre-meal family debate which ends with my sister and I grudgingly giving in to our parents.

With Christmas and New Year’s Day lined up in just two weeks, I imagine the exact same scene unfolding. Or maybe not. For those who often find yourself in the same predicament as me, we’ve found a place that gives the best of Western and Chinese food! 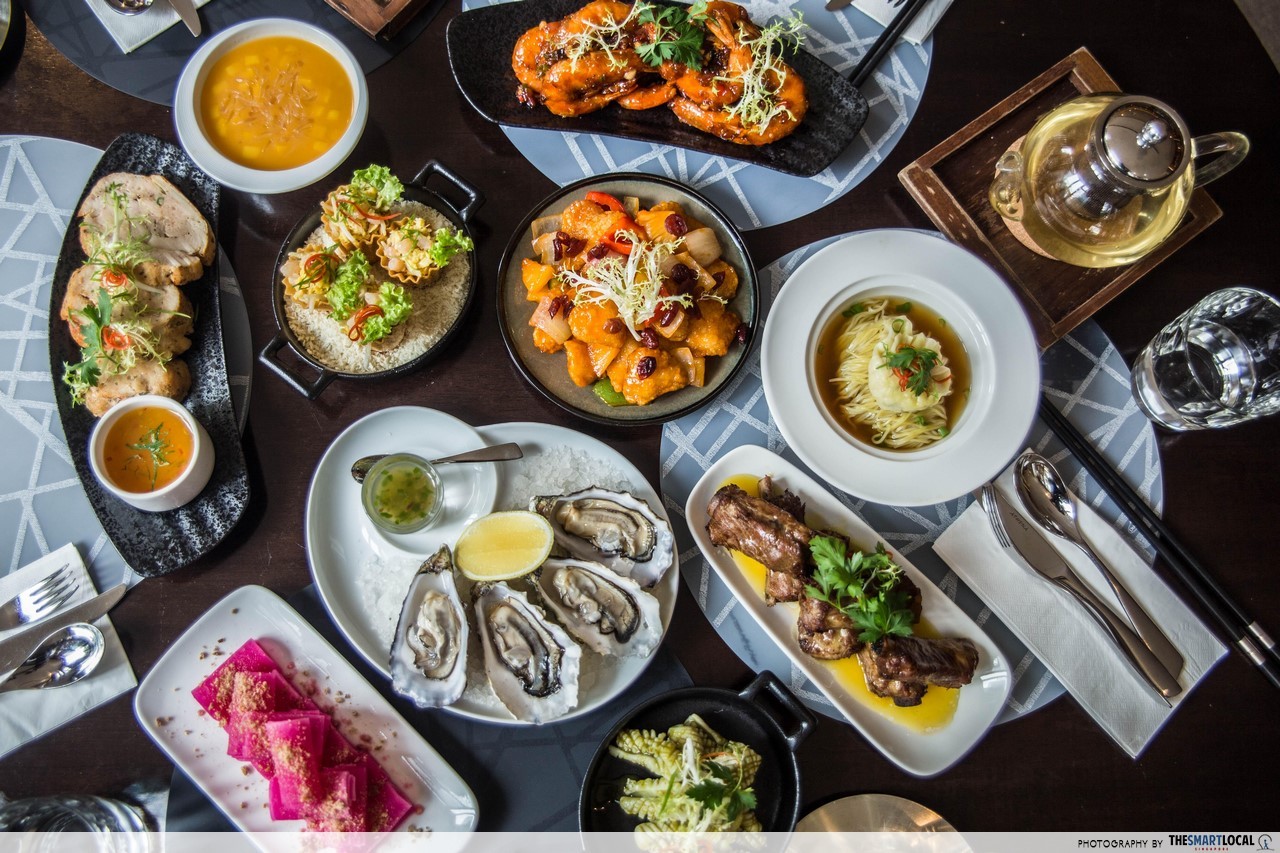 Available only from 22 to 24 December and 29 to 31 December, Kuvo is offering their first oriental buffet with festive-themed dishes. In an all-you-can-eat style, the restaurant near Somerset MRT Station will be serving up more than 20 dishes, whereby most are Chinese dishes that come with a twist.

Though I am one of those “strategic buffet eaters” who often dive straight into the main dishes to get the most out of whatever I’m paying for, I couldn’t help but be drawn to some of their more interesting appetisers. Alongside entrees such as Jelly Fish Salad, Smoked Salmon Platter, and Shrimp & Fruit Cocktail, one which really caught my eye was – Orange Peel Daikon Roll. 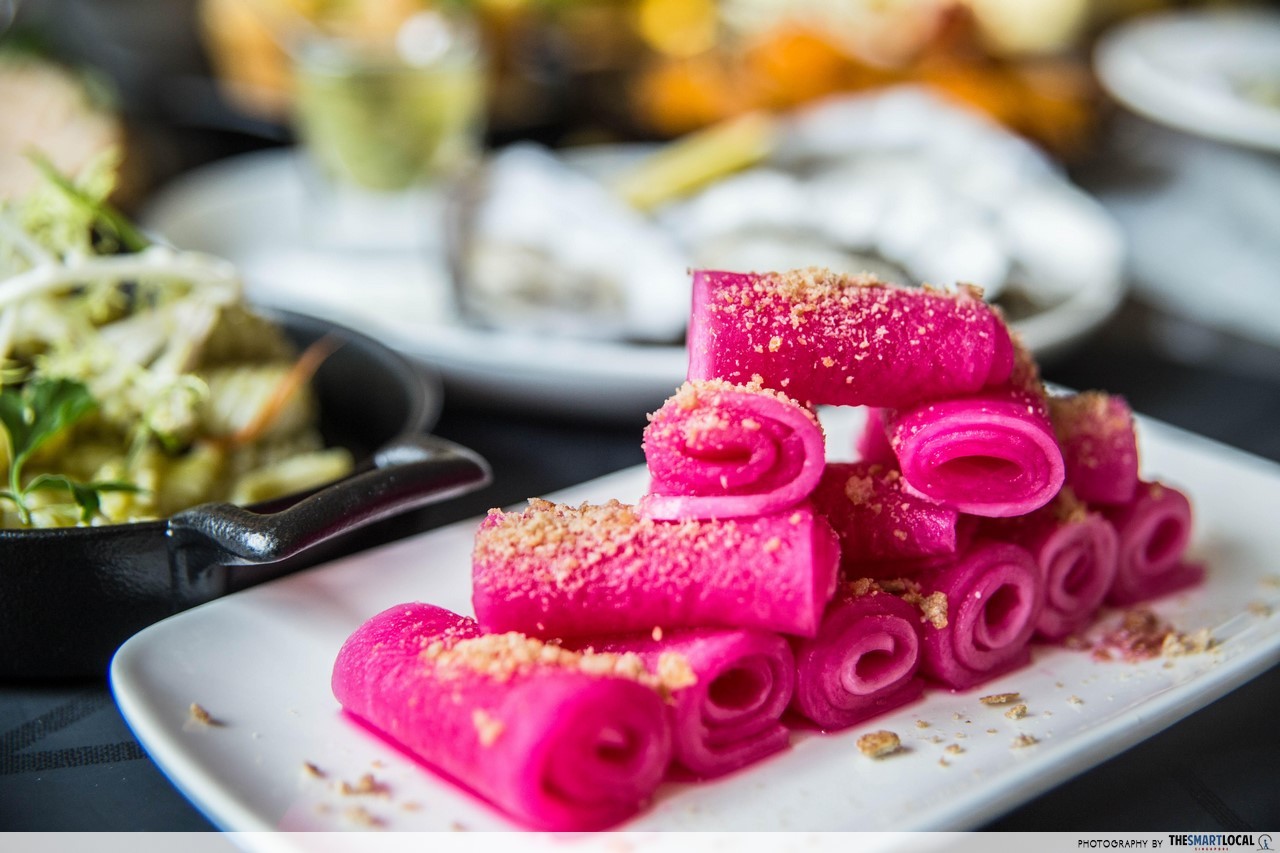 Dyed in a bright purplish-red colour, this was radish soaked in beetroot juice and topped with tiny bits of orange peel. Like those pickled radish served in Korean restaurants, the daikon roll was intensely sweet and sour, which I thought was a good appetite stimulator to kick-start a buffet. 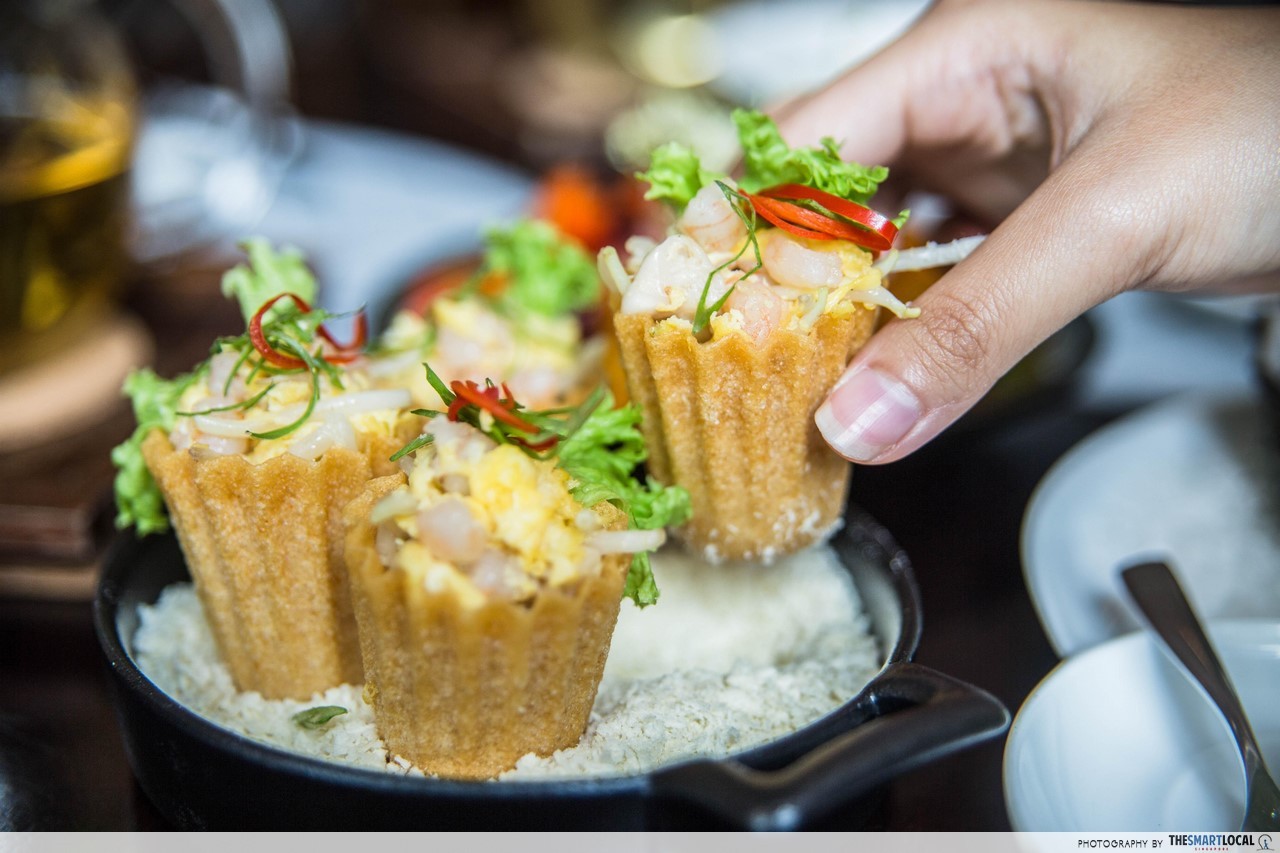 In a bid to ration my stomach space, the only other appetiser I tried was their Fried Egg in Crispy Cup. Truth be told, the only reason why I picked the dish was because I mistook it as kueh pie tee. 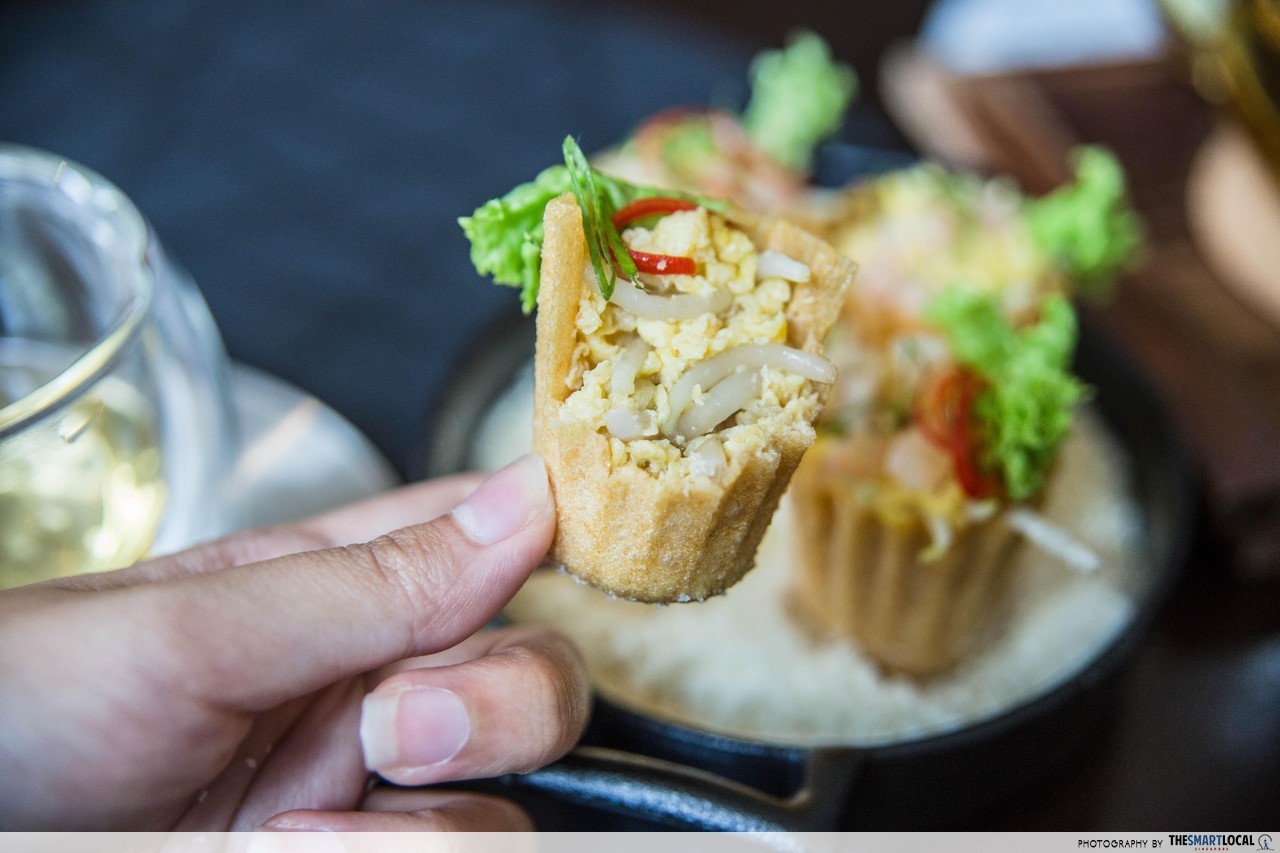 Served in crispy pie tee cups, the snack was filled with fried scrambled egg, bean sprouts, and shrimp. Comprising such simple ingredients, this was a lightly flavoured dish but the combination of textures coming from the crispy cup, bean sprouts, and eggs was what stood out most to me. 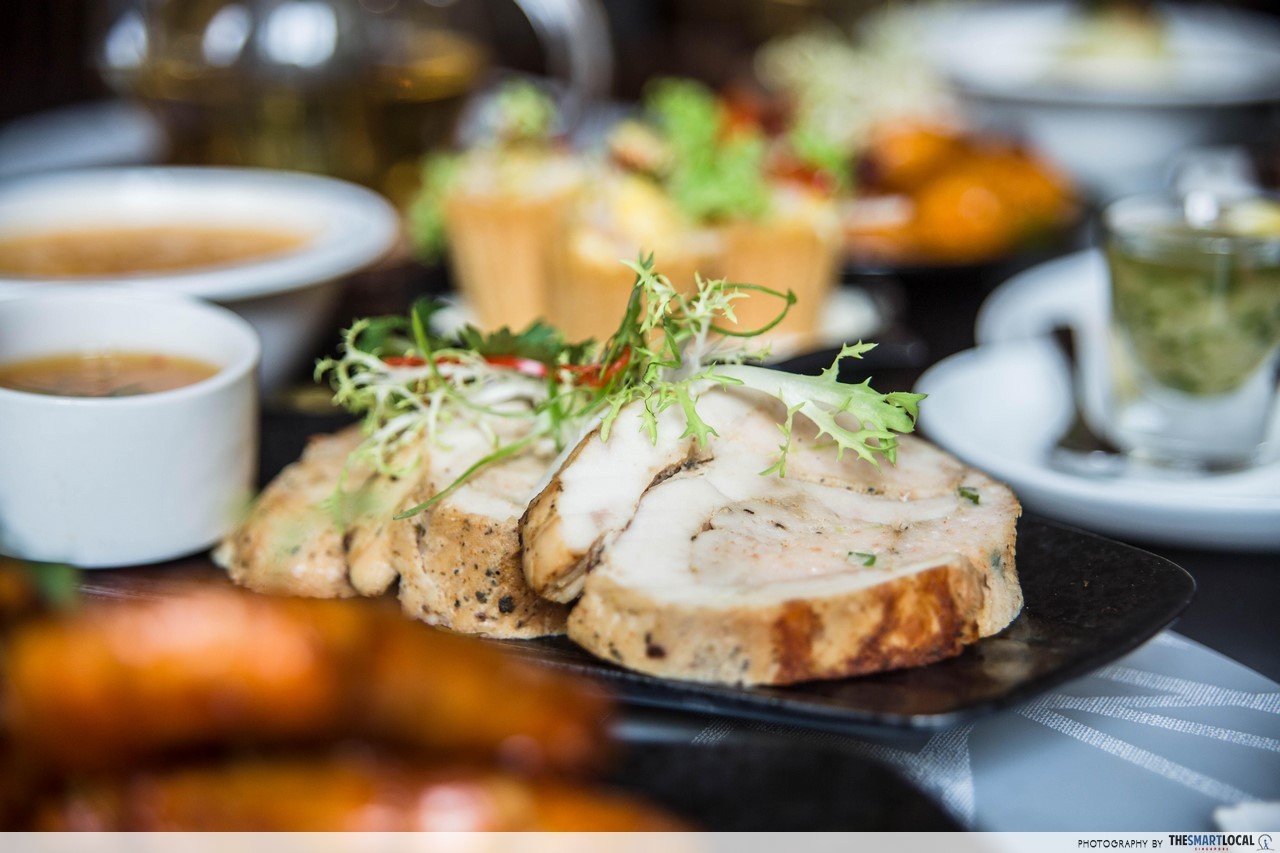 The Prawn Paste Stuffed Turkey Roulade at the carving station was one of the highlights of the buffet. While most turkey roulades are stuffed with bacon, pecans, or pistachios, this had the mainstream ingredients replaced with thick chunks of prawn paste. 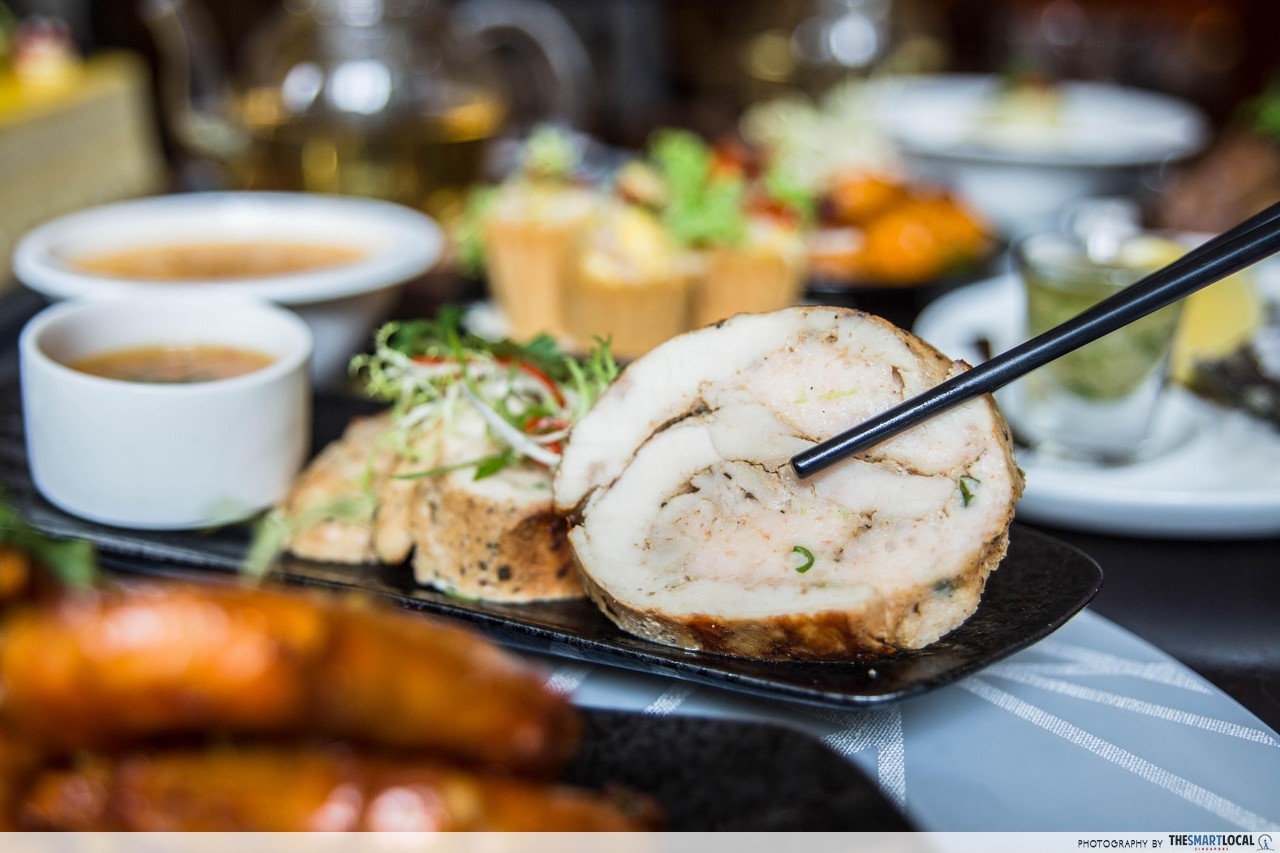 With a hint of lemongrass fragrance, the prawn paste reminded me of Thai prawn cakes which gave a different texture to the slightly tougher turkey meat. Having prawn paste and turkey together is a combination that I would never have thought of, but came together surprisingly well! 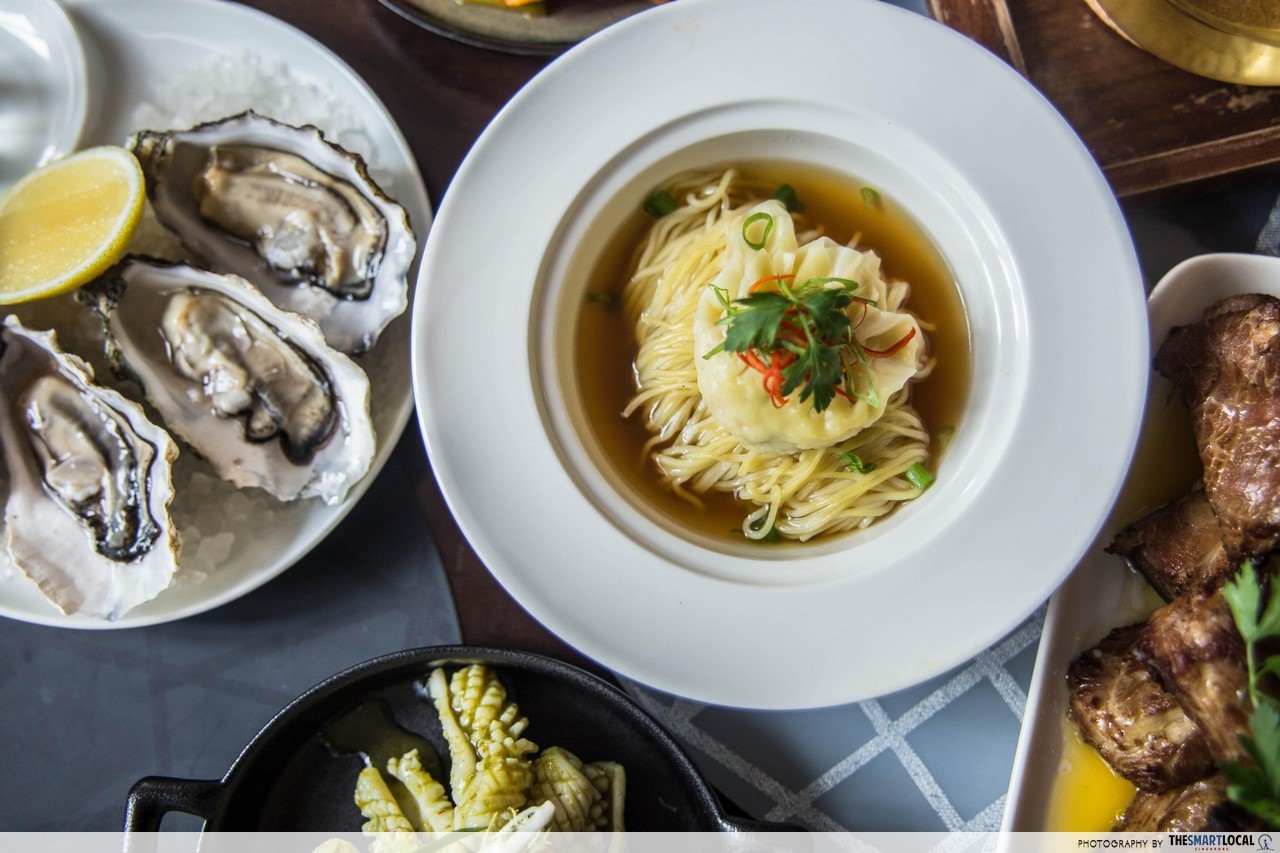 Another self-invented rule that I broke during my visit to Kuvo was one against eating any forms of carbs during a buffet. I knew I still had a long line of meats and seafood ahead of me but when I saw the Turkey Wanton Noodle Soup at the live station, I could not resist.

While their turkey roulade is a Western dish with an Asian twist, this is a Chinese dish with a Western touch. Instead of the usual crunchy shrimp that is found in the dumpling, this one was stuffed with turkey meat. 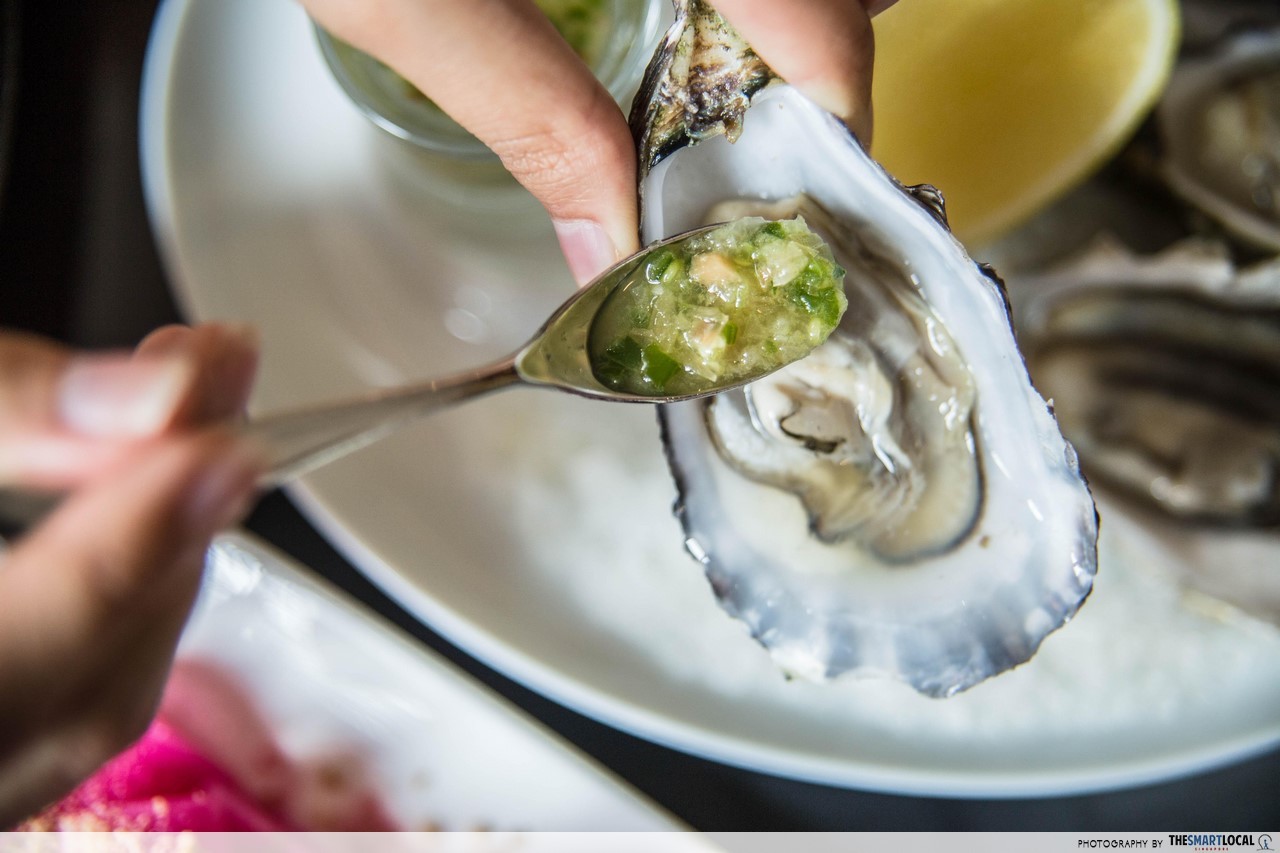 At the live station, another dish you can expect is Freshly Shucked Oysters. A unique feature was the house-made sauce that accompanies the oysters. Packed with bits of coriander, the sauce was intensely sour and tangy, which may not sit well with some but I thought gave the seafood a refreshing kick.

Finally, on to the mains. While most buffet spreads feature a variety of cuisines, Kuvo’s oriental buffet focuses mainly on Chinese dishes such as Shrimp Paste Marinated Chicken Wing, Wok-fried Beef in Ginger, and Cured Meat Fried Rice. 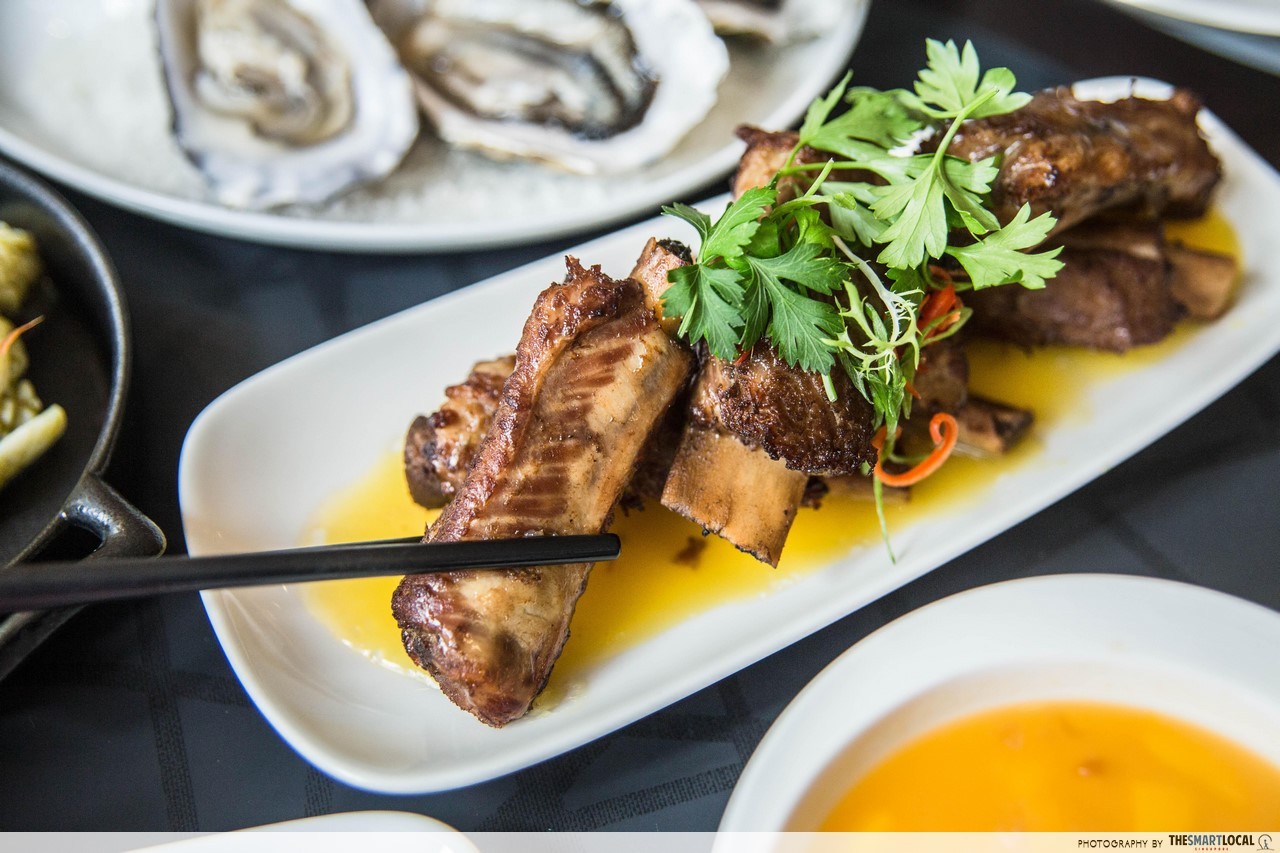 For something more out of the norm, their Champagne Pork Ribs is a must-have. Taste-wise, I could not quite figure out the champagne element in the dish but overall, it was still tasty and well-marinated. 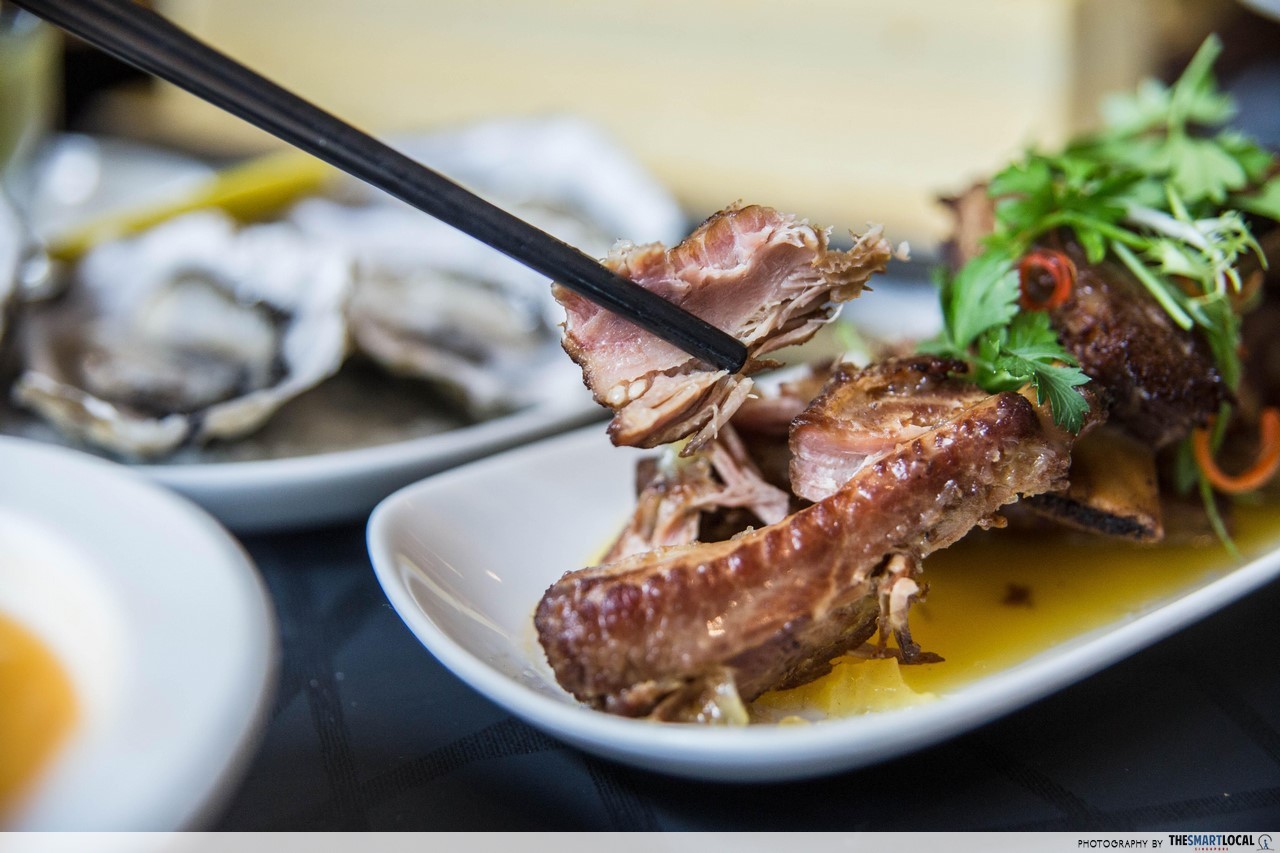 The best part of the pork ribs would be its tenderness which made the meat come off the bone easily. 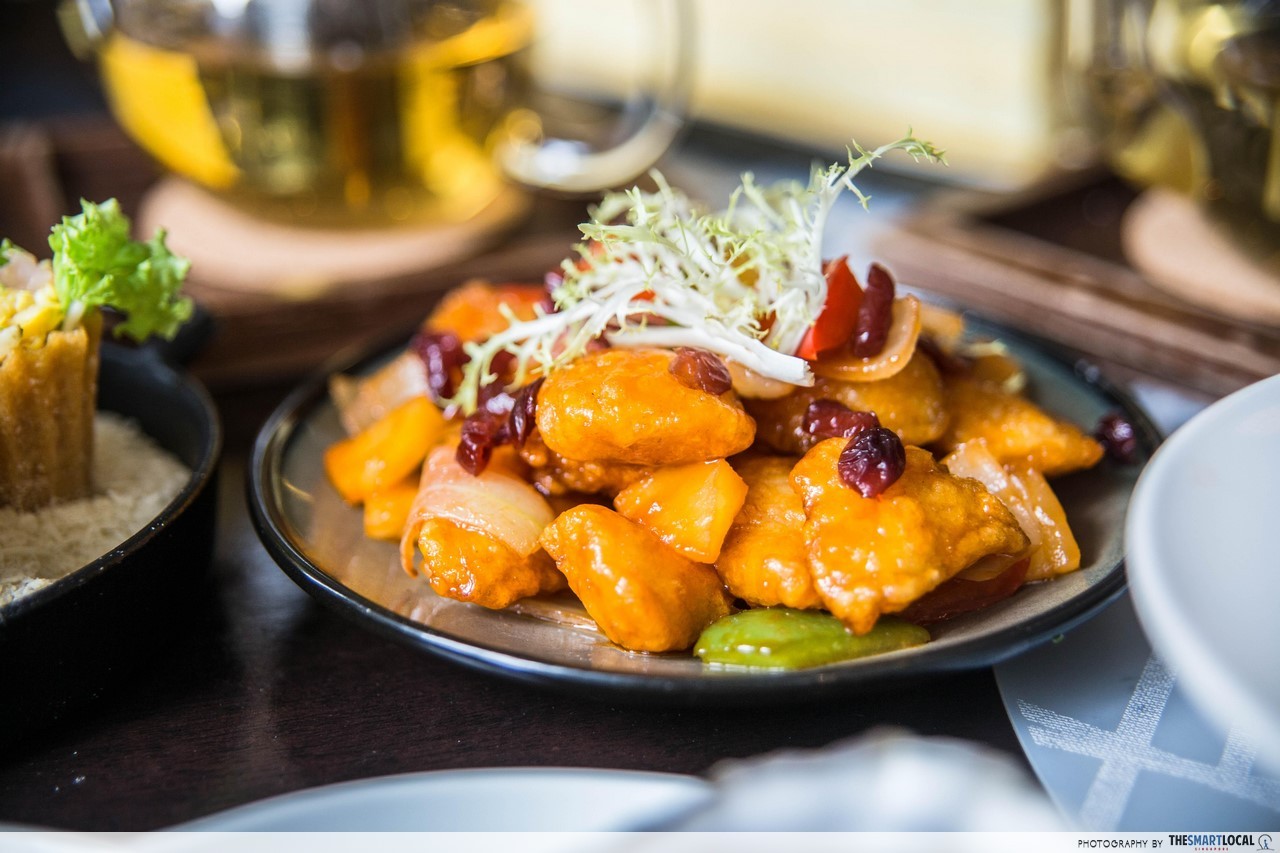 Their Snapper Loin tossed in Cranberry-Pineapple Sauce will remind you of sweet and sour fish fillet from atas Chinese restaurants. With bits of dried cranberry, the fried fish fillet also comes with caramelised onions, bell peppers, and pineapple slices. 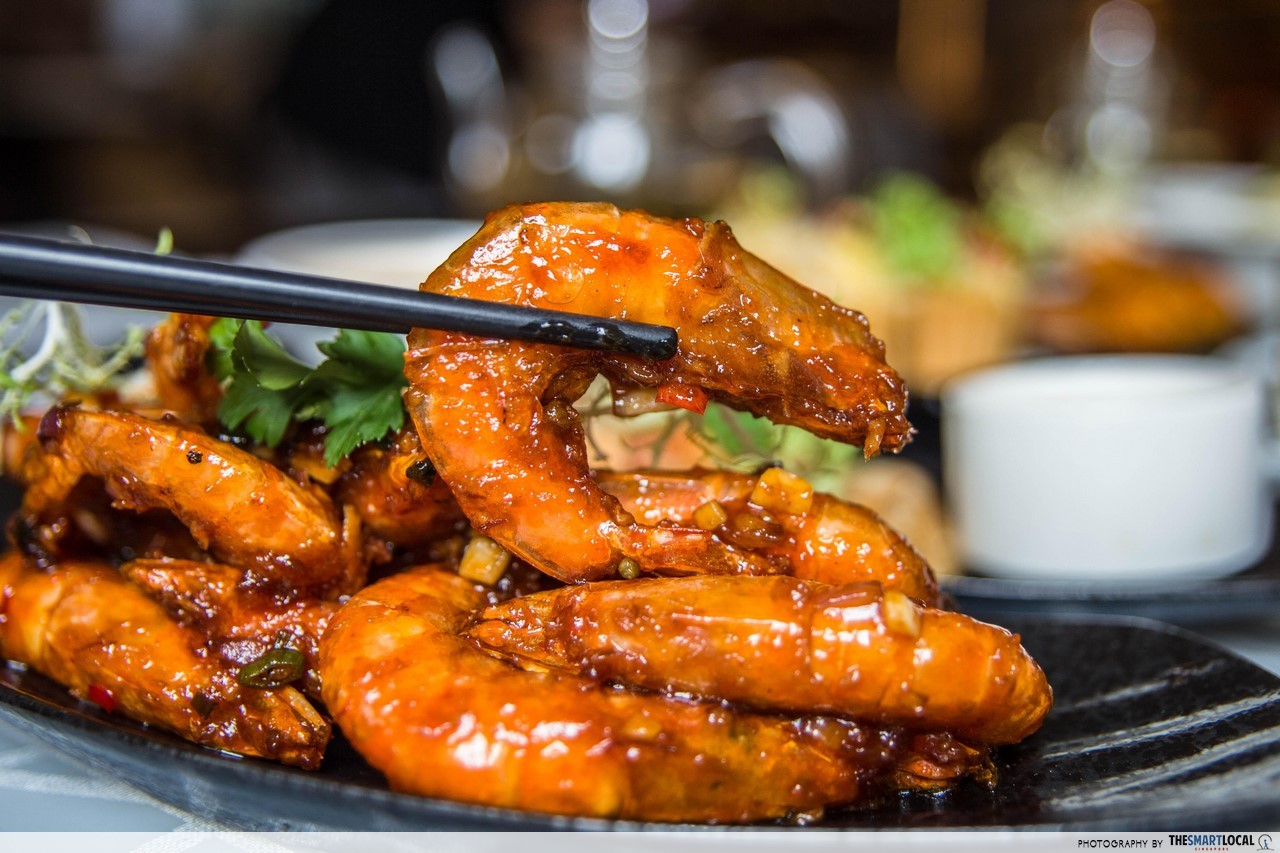 The best dish to eat your money’s worth with would be their Wok-fried Prawn with Special Sauce. Coated with a thick layer of sweet and salty sauce, the dish tasted like stir-fried soy sauce prawns from Cantonese restaurants. For something found in a buffet, I wasn’t expecting to find prawns that big, so those who detest deshelling prawns can be assured that your efforts will not go unrewarded! 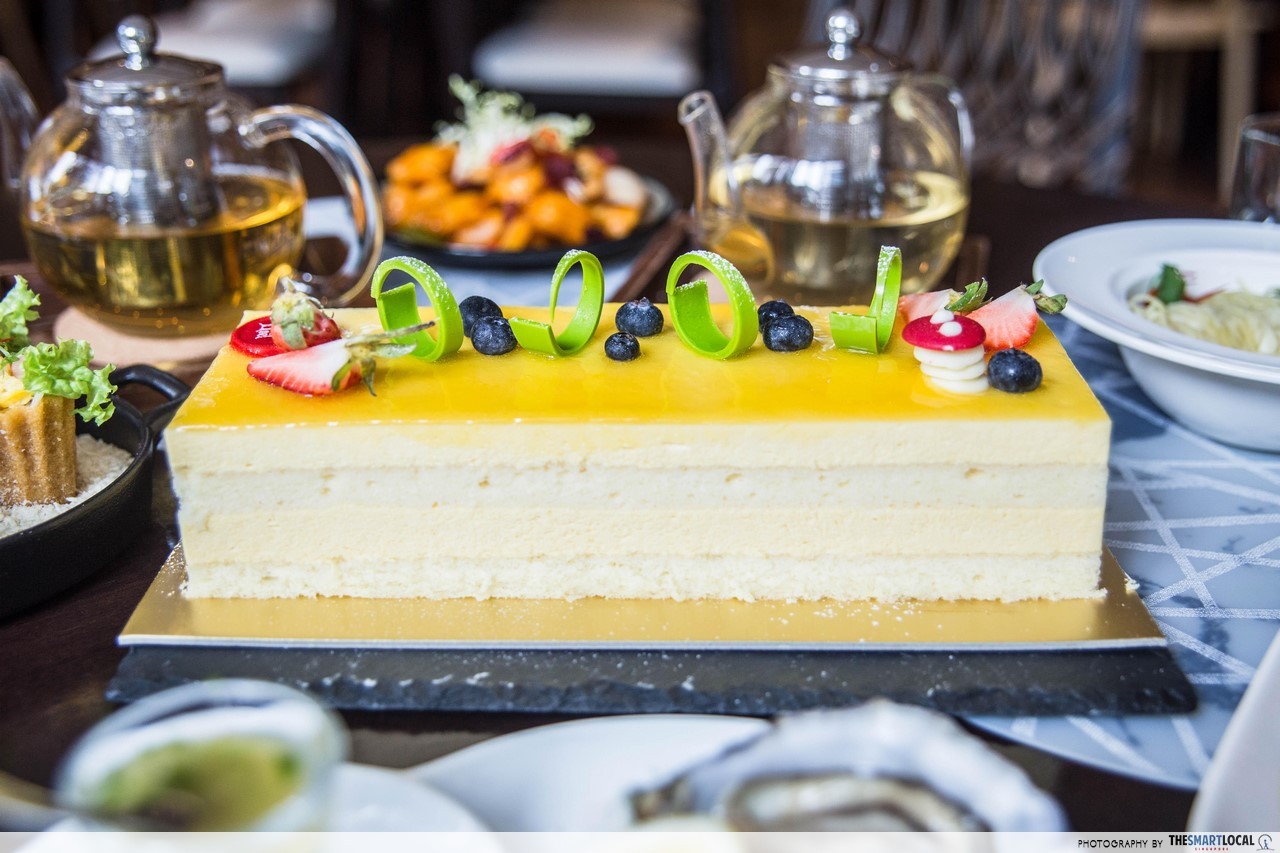 No Christmas meal is complete without log cakes and at Kuvo, they offer three different flavours – Crunchy Dark Chocolate, Hazelnut Praline, and Passion Mango. While I wouldn’t mind having all three in one sitting, they only serve one flavour a day and we got to try the Passion Mango one. This was a soft sponge cake layered with a tart cream and topped with berries. 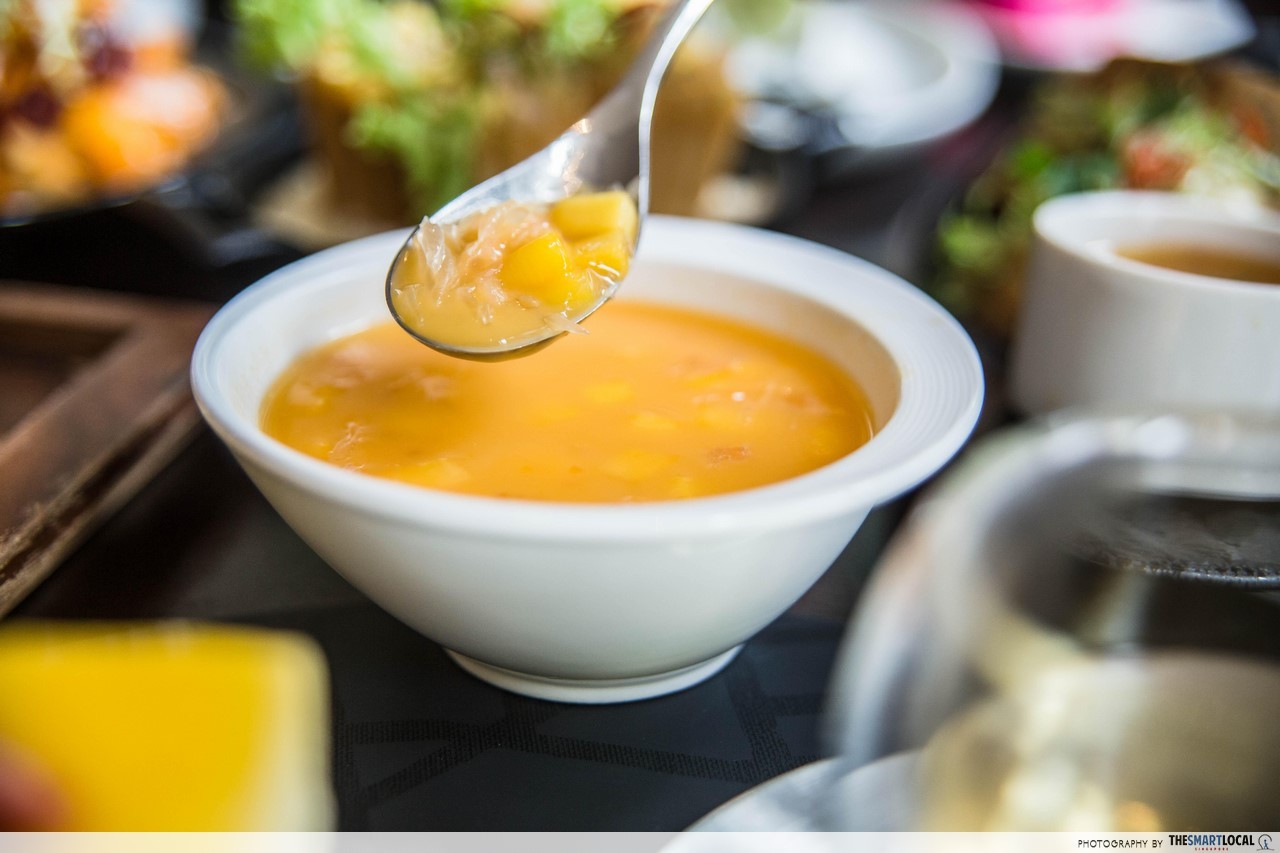 For something slightly sweeter, their Mango Sago was also a pleasant treat to end the meal with. Filled with crunchy bits of pomelo, sago, and diced mango, this dessert is something that both the young and old would not be able to find fault with. 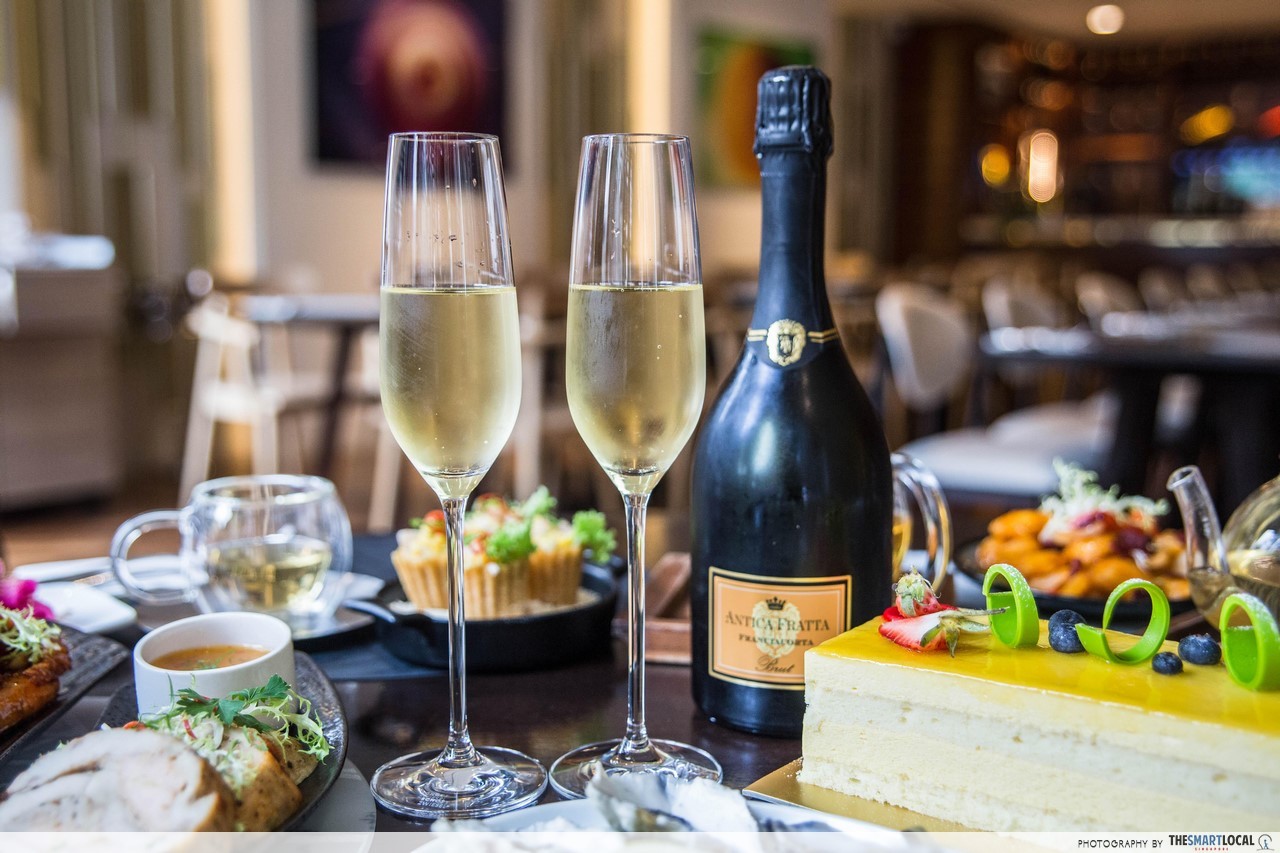 If you and your family have been going for the old-fashioned cold turkey and roast chicken every Christmas for the past decade, Kuvo is the place to switch things up while still retaining some of the all-time festive favourites. And if the spread of food still isn’t enticing enough, you can also top up an addition $30 per person for two hours of free-flow drinks that include sparkling wine, beers, and soft drinks!

Reserve a table at Kuvo for their Festive menus now