Keyaki has always been one of my favorite Japanese restaurants in Singapore. Not just because they are quietly tucked away in the lush Pan Pacific Singapore Hotel, but because they serve up some of the freshest and most authentic Japanese food.

We recently went down to Keyaki to try their new lunch/dinner menu, which takes you on an epicurean discovery of Hokkaido. This new 8-course kaiseki (multi course Japanese meal) presentation at Keyaki crafted by Chef Hiroshi Ishii, was put together to showcase the copious and expansive winter produce from Japan’s largest prefecture. 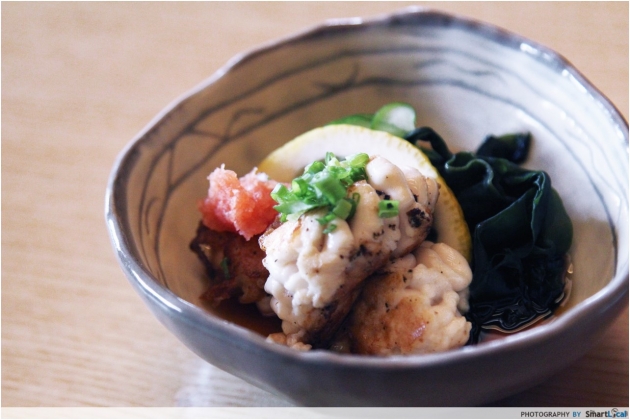 The first dish of this 8-course menu was something out of the ordinary for me. Cod Milt Tofu – as stated in the menu, is cod sperm. I was rather apprehensive to try it, but this delicacy actually has a great texture and went well with the the sauce, seaweed and radish. 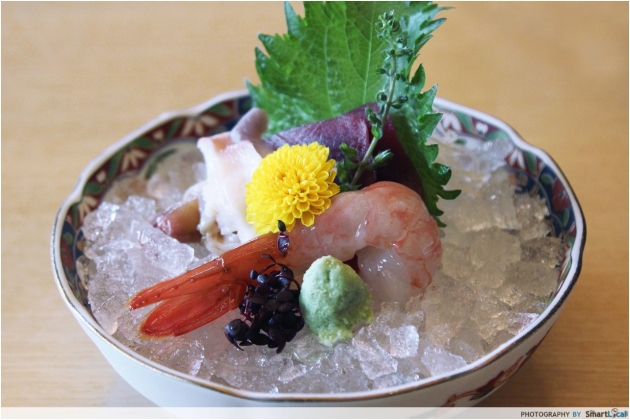 The next appetizer on the menu was a Sashimi Platter of Toro (Tuna), Botanebi (Botan Shrimp) and Hokkigai (Surf Clam). As expected, the sashimi was fresh and you won’t need any wasabi or shoyu to go with it. They were also rather generous with the thick sashimi slices, which capped off a delightful start to the meal. 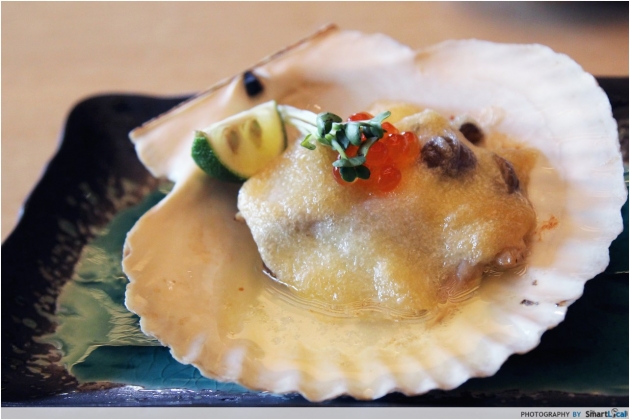 To kick off the meal proper, we had the Grilled Scallop with Egg Yolk Sauce. Prepared in authentic Japanese fashion, it was appetizing and tasty, but surprisingly not overpowering. The huge piece of scallop was also served with Japanese mushrooms and salmon roe. 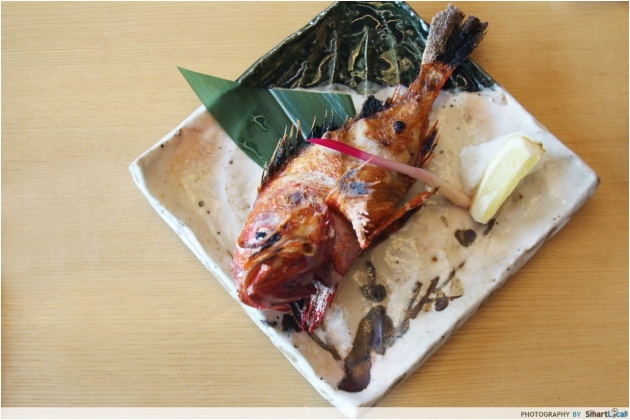 The next dish was a traditional Grilled Kinki Fish, that is specially shipped in just for this menu. Fattest during the Hokkaido winter, the Kinki Fish has succulent meat with a creamy texture and surprisingly easy to eat. I tend to avoid eating whole grilled fish, but the Kinki fish has little bones and delicate meat that just falls out in large chunks.

The fish is also lightly grilled and sprinkled with salt, ensuring a mouth-watering smell and aroma of the crisp skin and meat. 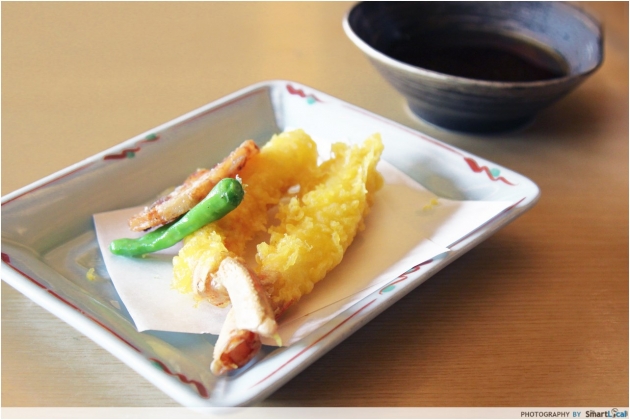 A Japanese meal is not complete without a serving of Tempura, and there is no better Tempura to have than Snow Crab Tempura. This crustacean native to the Northern Pacific Ocean has a strikingly sweet taste, and due to its size, has meat that just peels off the shell. The Snow Crab Tempura was really tasty, although I was rather disappointed by the portion size. 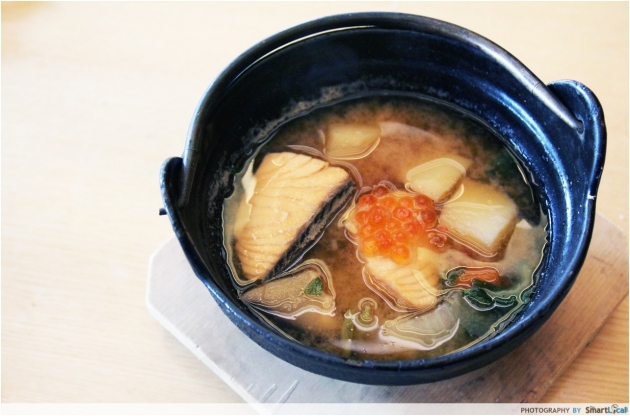 I was looking forward most to the Ishikari Nabe (Salmon Miso Hot Pot), as I love miso soup and salmon. It did not disappoint, and it came in a rather large pot that more than made up for the small portion size of the tempura. The salmon was well cooked, and the hot pot came with Hokkaido potatoes, mushrooms and vegetables, presenting a perfect aroma of flavors in the broth. 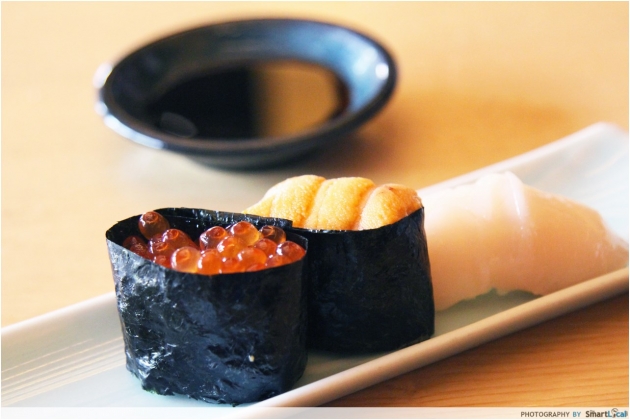 Next up was a sushi combination, featuring Uni (Sea Urchin), Ikura (Salmon Roe) and Hotate (Scallop). It was a nice end for our mains, with sweet Japanese rice and fresh seafood to top it off. 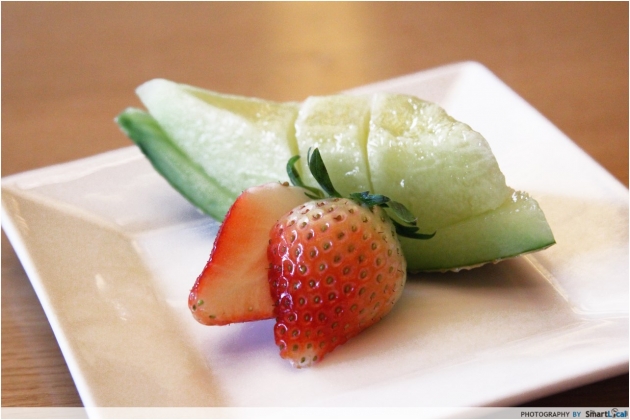 The last dish of this Epicurean journey of Hokkaido was the Yubari Melon Jelly, which was diabetically sweet and it just melts in your mouth. Here’s a tip: When picking out Japanese melons, try to look for those with more white stripes/lines on the outer skin. These white stripes are actually sugar deposits, so are generally sweeter! 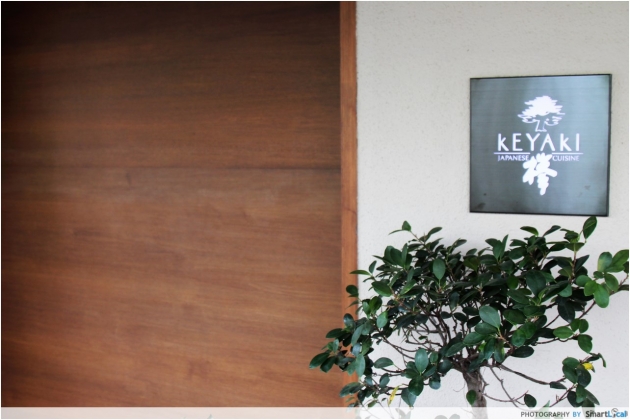 The food in Keyaki rarely disappoints, whether you decide to have their sashimi, sukiyaki or even teppanyaki.

This February special comes in 3 different 8-course meal sets, ranging from $160 to $190. Although it may be pricey, it is definitely worth the money for those who appreciate the finer tasting things in life. 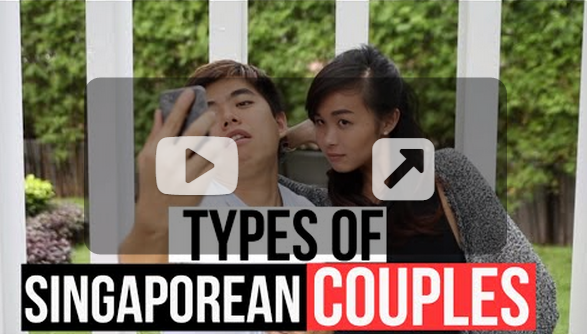