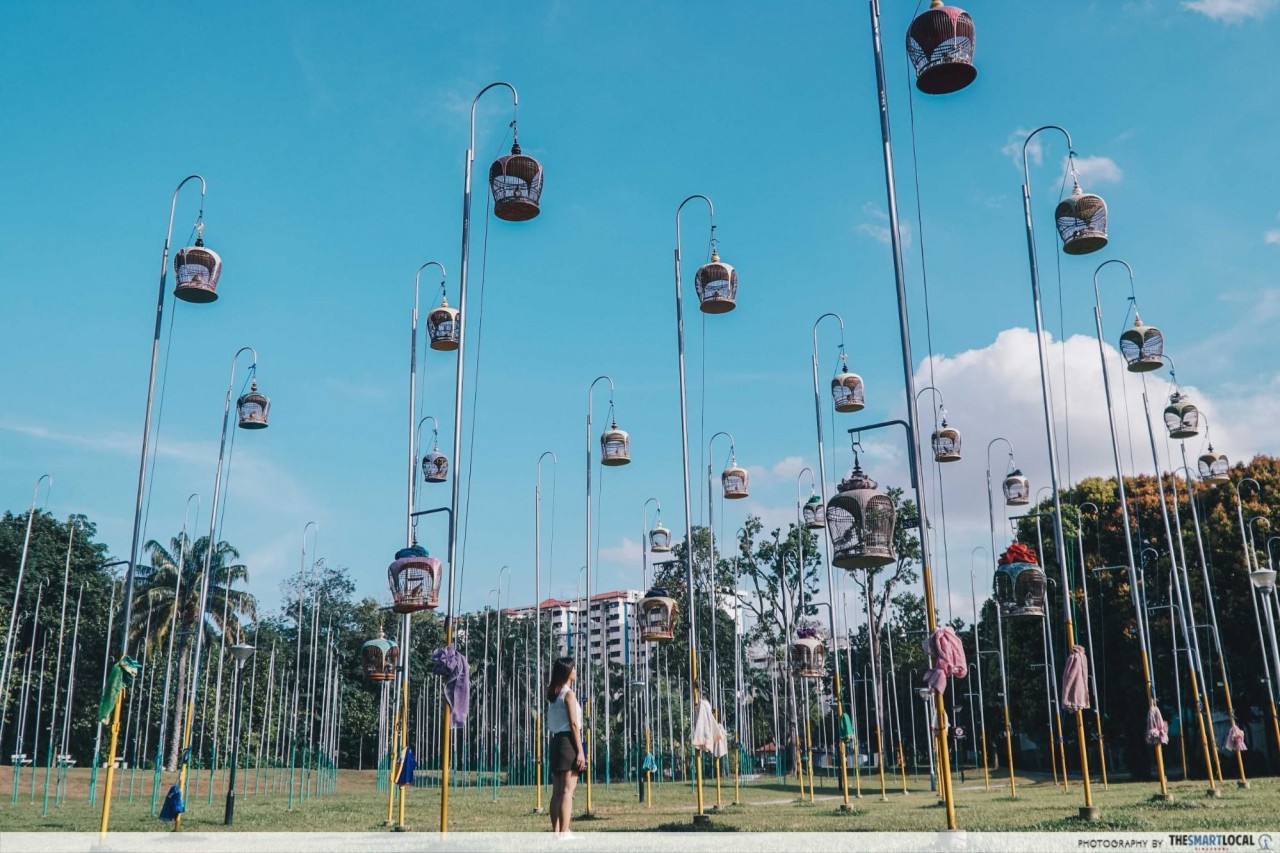 These days, tweeting means less “bird sounds” and more “280 character word limit”. That is, unless you’re part of the Kebun Baru Birdsinging Club. For those who haven’t heard of it, a quick search on Google or Instagram will yield scenic shots of the landscape and millenials posing for their #OOTDs in front of the bird poles.

But seeing pictures on the internet hardly answers any questions about the little corner, like what the iconic flag poles are for, or how the club even got started in the first place. So in order to satisfy your curiosity – and ours – we headed down early one Sunday morning to talk to the folks behind the club. Here’s what we’ve learnt:

The birds have to be hung up on flag poles 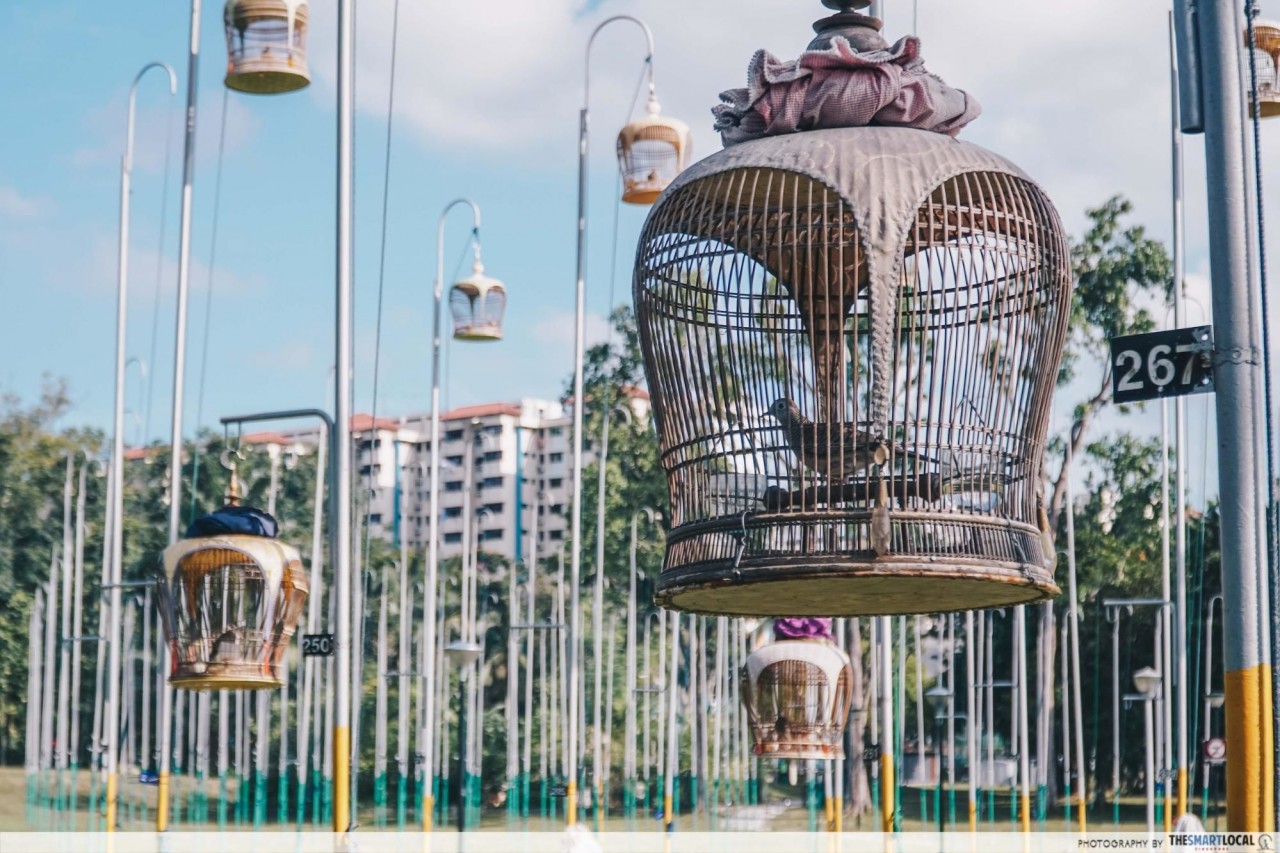 The bird cages are raised on poles every morning – similar to that of flag raising ceremonies back in school. But why do they do it? Do the birds also need to have morning assembly? Are they actually singing the national anthem?

“No lah,” explains Asrhad, a 36 year-old-bird owner. “These birds are called merbok, or zebra doves. In the wild, they usually nest in trees. We put them in elevated cages so they feel safer and more comfortable.” 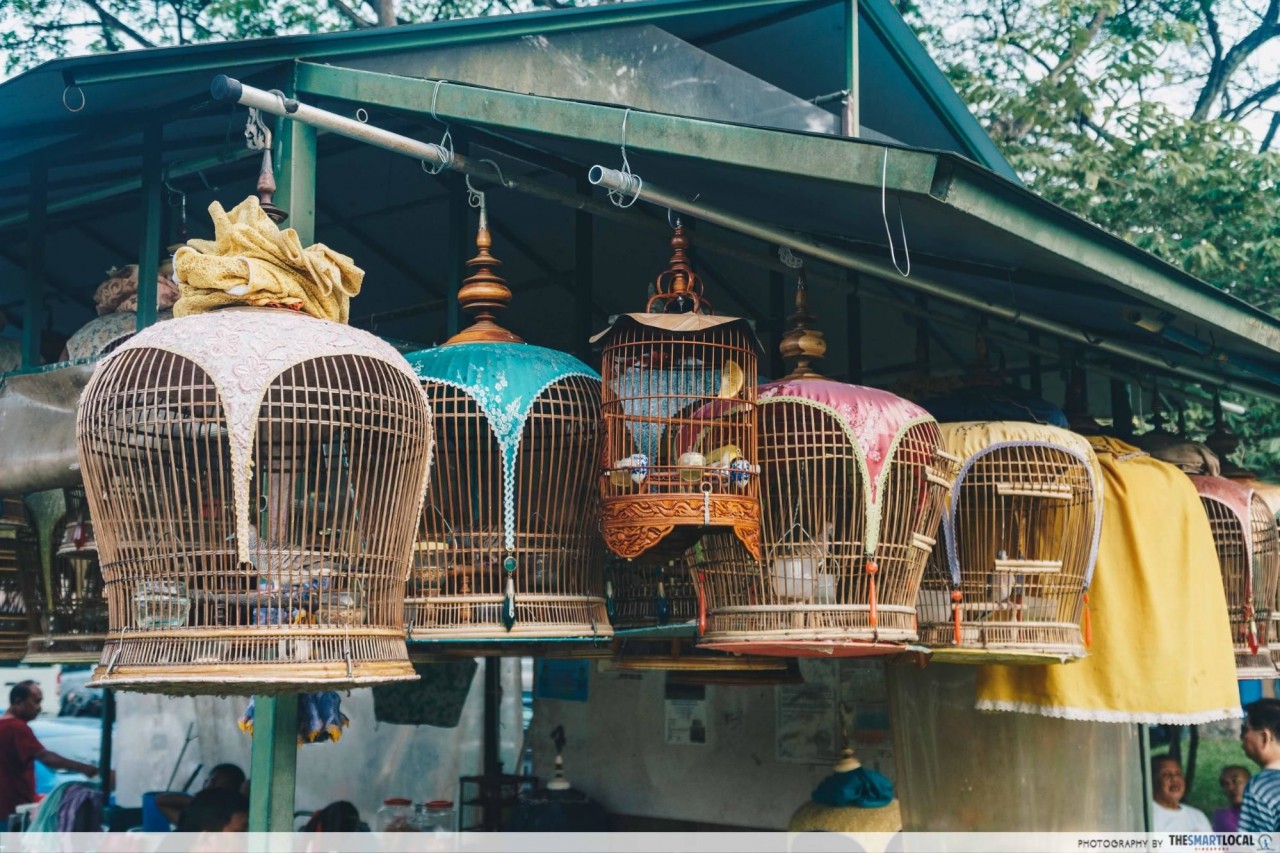 Other species, like the Chinese thrush or white-rumped shama, generally nest in bushes or on low-hanging branches. These birds are kept on low-hanging hooks, some even placed on the floor.

Hendry, 67, sat with his songbird a short distance away from the others. We asked him why his bird was sitting alone. “These young one are likely to be intimidated by older birds,” he explained. “It’s better to keep them apart until they gain more self-confidence.”

A single songbird can cost thousands of dollars

Songbirds aren’t the most gigantic creatures – unlike some dogs that can stretch to be as tall as a human. Even the largest songbird can’t be much bigger than your closed fist. So how much can one of these little creatures really cost? 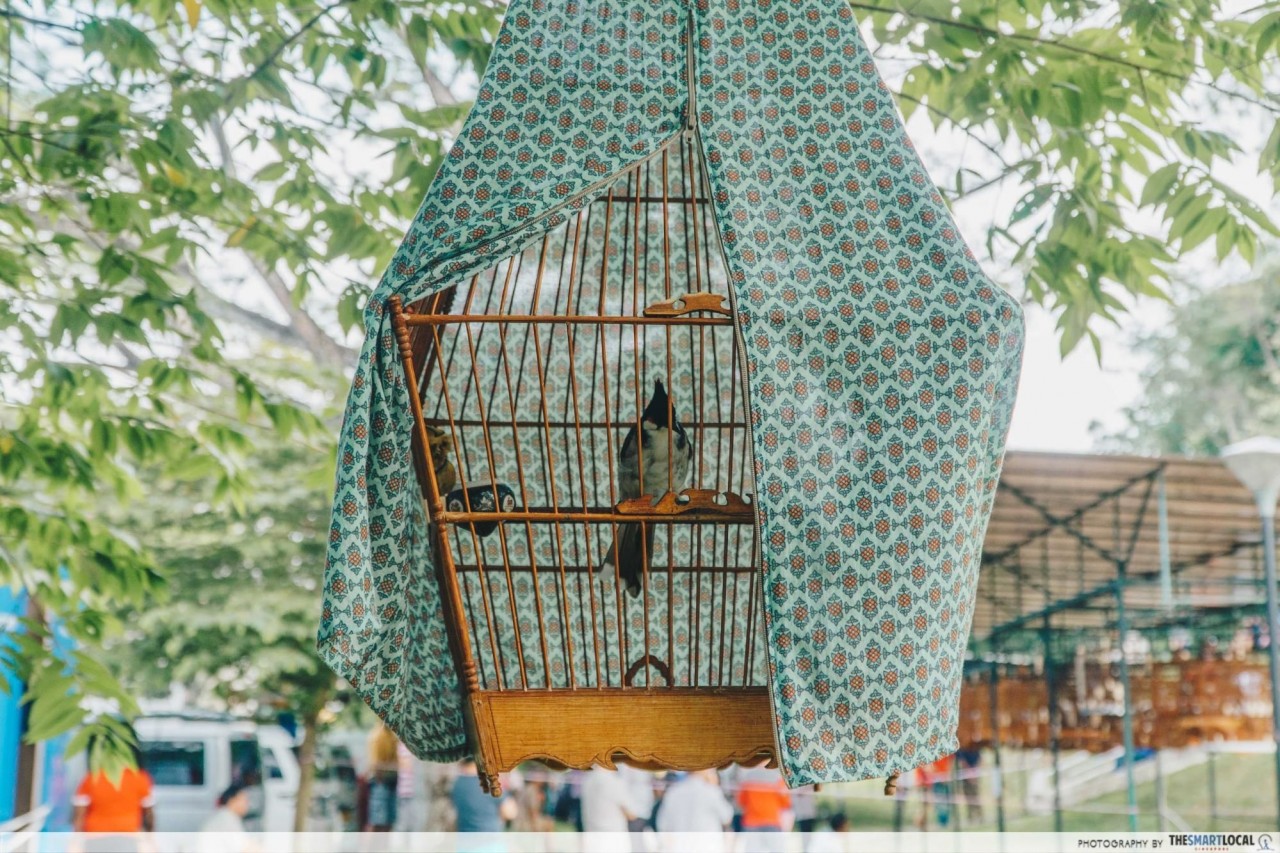 Nope, that wasn’t a typo. While we were unable to get the specifics of the transaction, we did ask a number of bird owners, who confirmed that they’ve heard of this legendary sale. And aside from this exceedingly expensive and rare purchase, the majority of songbirds at Kebun Baru also fetch a 3 to 4 digit price.

These birds have been specially bred and trained by breeders to be powerful singers, and many are imported from overseas, hence the hefty price tags. 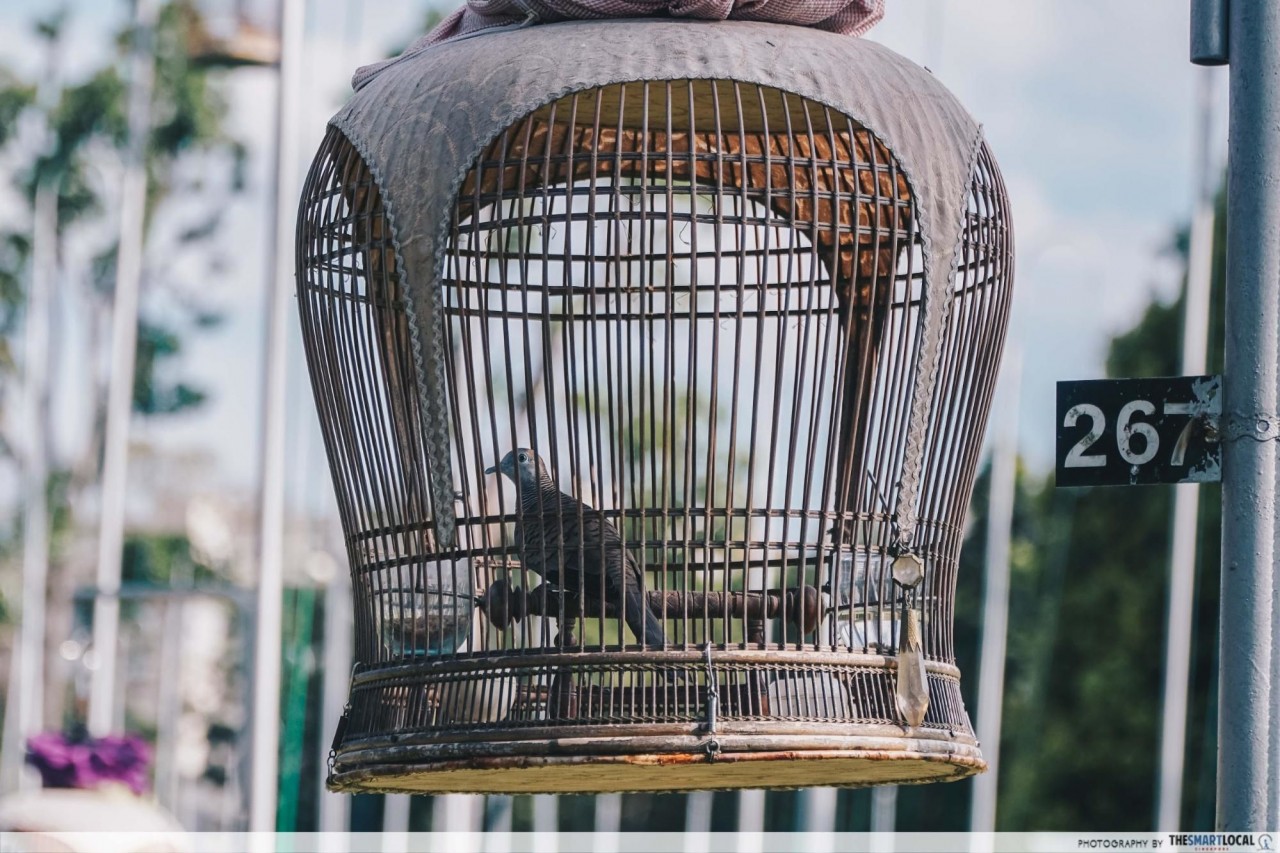 But of course, if you are keen on getting a bird, but less keen on giving up the new iPad you’ve been eyeing, you can get these beauties for as little as $80 at a bird shop. These birds are not specially bred, but then again, genetics are random, so who knows. You might just get a jackpot champion songbird for cheap!

The club is solely donation-based and run by volunteers 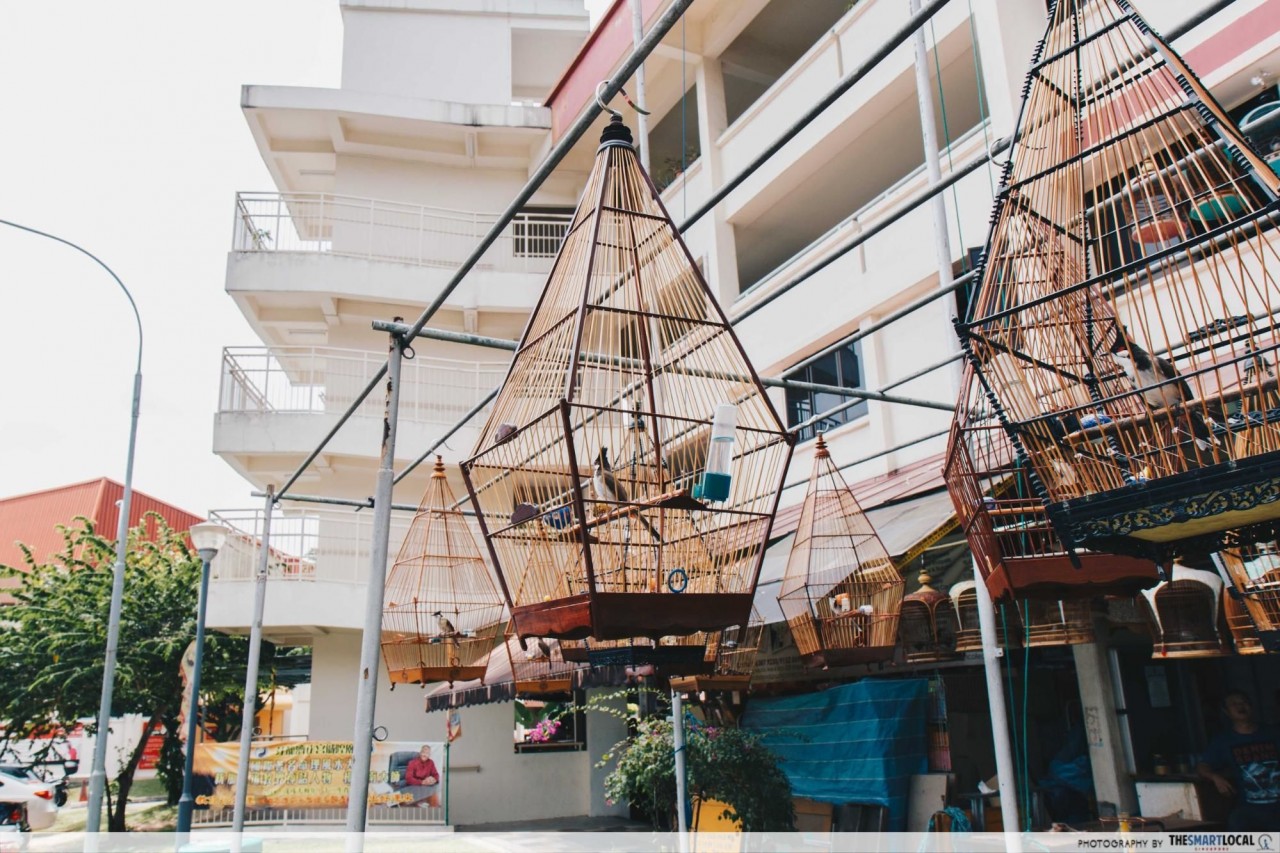 Back in the 80’s, when our grandparents were still just parents, a group of bird owners decided to build a place where their birds could hang out comfortably together. They dug into their own pockets and set up a small area in Ang Mo Kio, with wooden poles for their birds and a cloth tent for shelter. 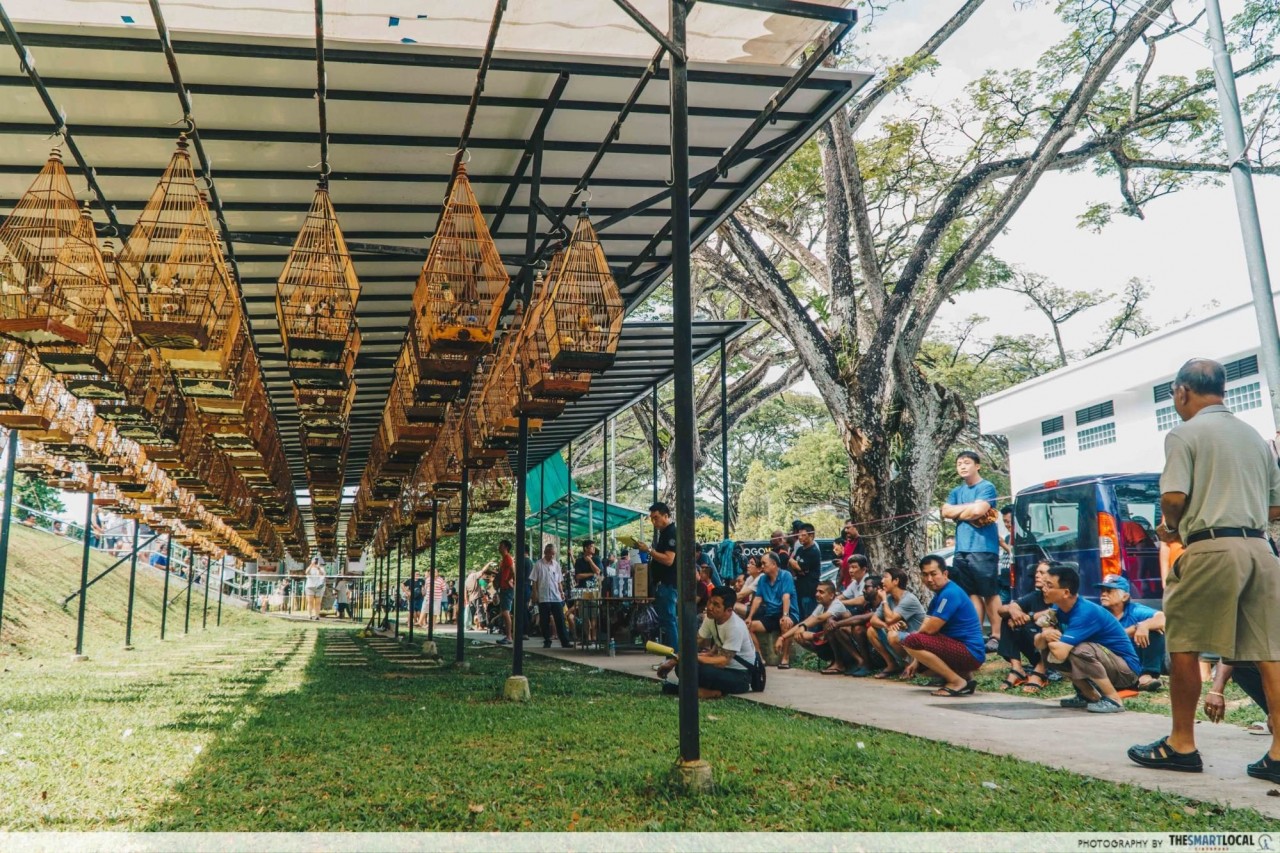 Fast forward a few decades, and their little pet project has become the biggest bird singing club in Singapore. Hundreds of well-maintained metal poles line the same area, and shelters have been built for both the birds and bird owners. 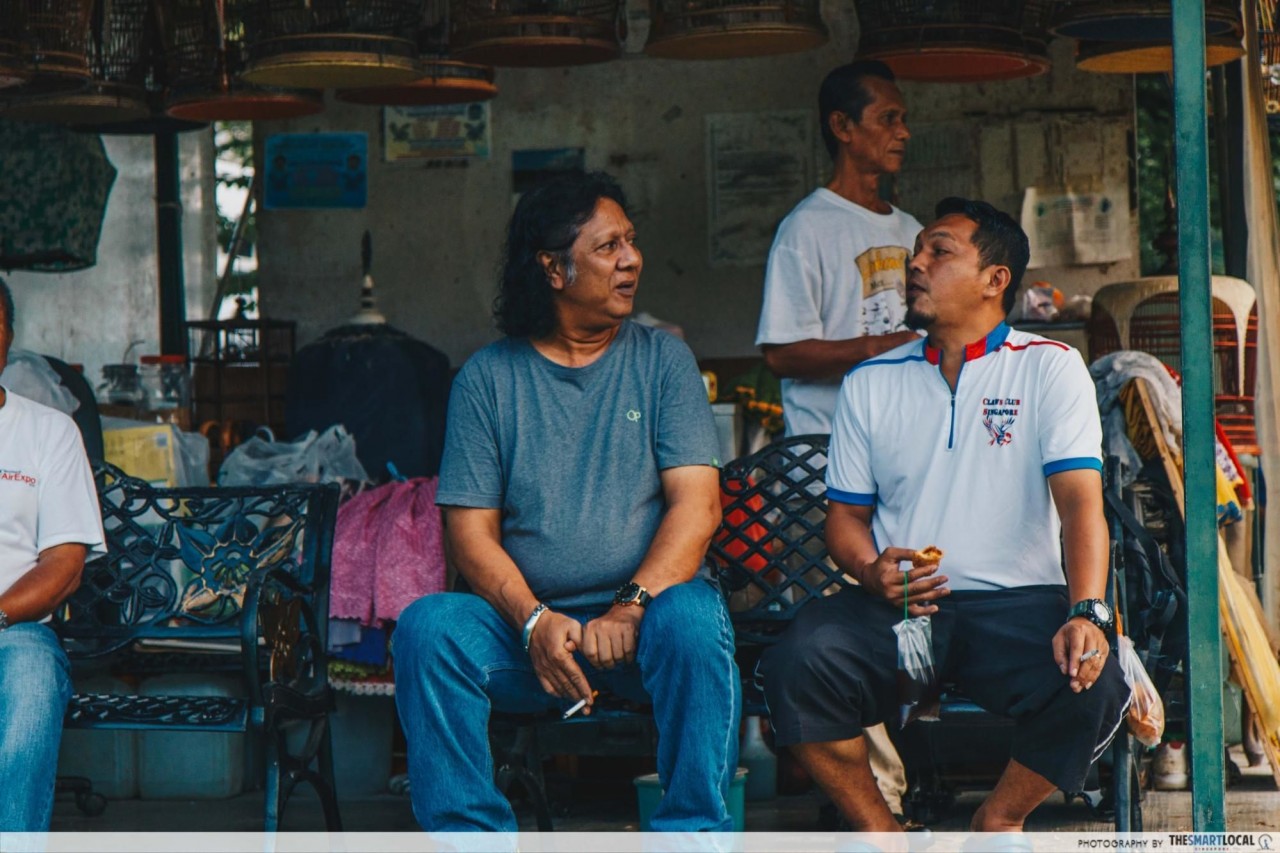 “Bird singing is a social activity.” says Robin, who held the position of Vice Chairman of the club a few years back. “The birds are more comfortable when they can hear each other sing, and it’s a good opportunity for bird owners to gather and socialise with their friends.”

As we speak, I look up at the cherry trees which shelter us. They were planted by Robin himself, who ironically doesn’t own a songbird. He plays a huge part in running the club by working with the Town Council and National Parks to maintain the area, going down personally to show visitors around, and even managing their Facebook page. 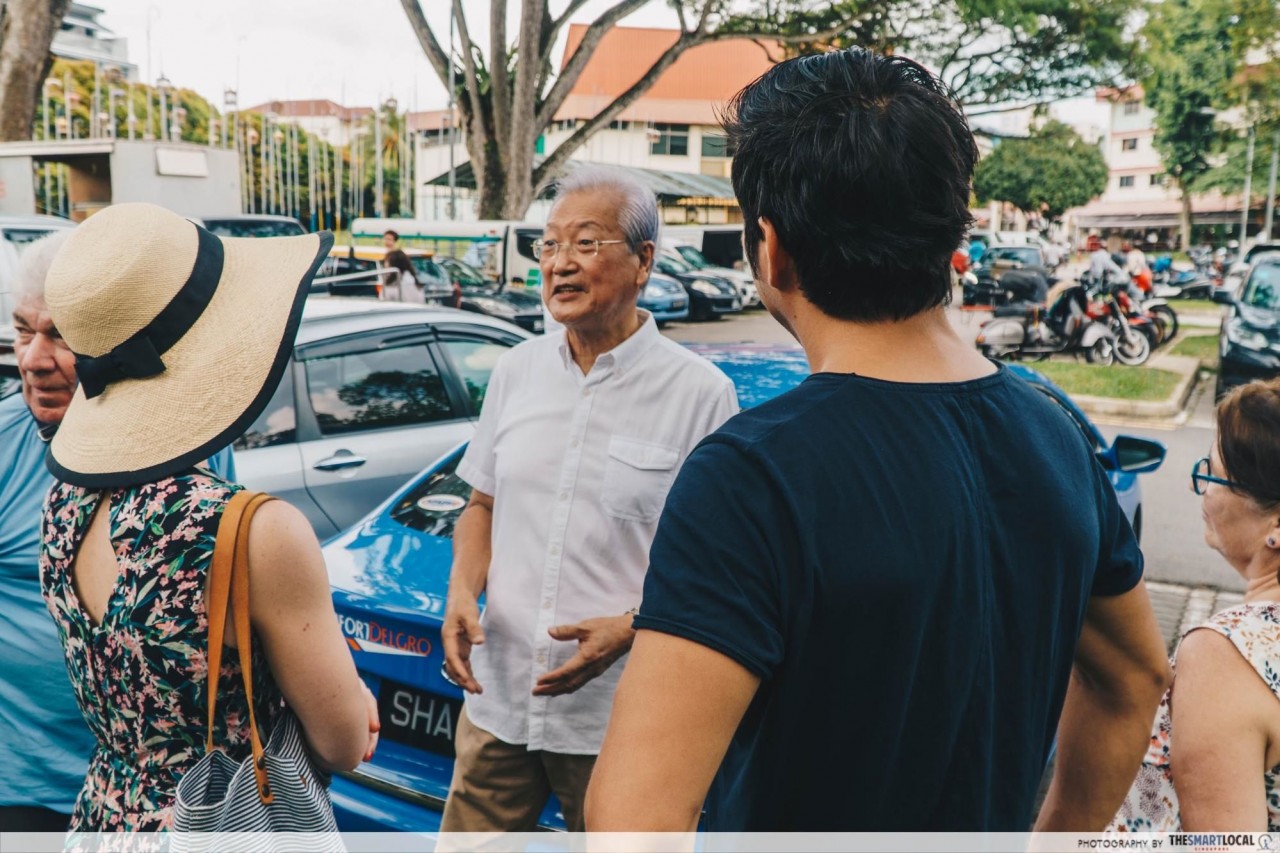 And that’s one of the most special things about Kebun Baru Birdsinging Club. Even with all their progress over the years, not a single cent has been charged in membership fees. All of their funding comes from donations, and folks like Robin keep the place running on a voluntary basis.

“I’m just really proud of the place,” Robin tells us with a smile. “Everything is free, so anyone is welcome to come down and enjoy the place, whether they own a bird or not.”

Bird singing is a competitive event, and hundreds of people participate

At 6AM on a Sunday morning, when most of us were still comfortably snuggling under our blankets, the Kebun Baru Birdsinging Club was already a hive – or should we say, nest – of activity. 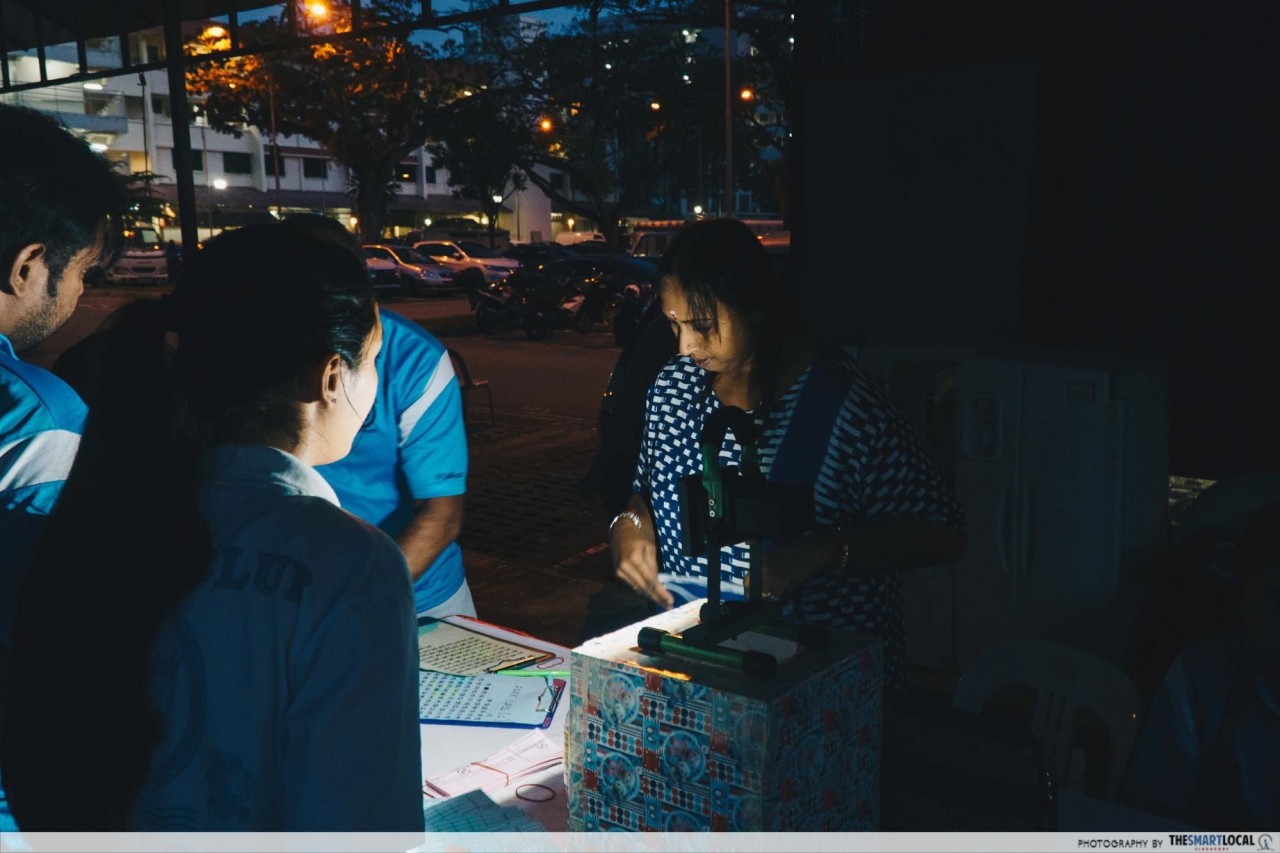 It was competition day, and many bird owners arrived early to give their songbirds time to “warm up” and get comfortable. It was still dark out, so they signed up under the white light of a lamp and paid a small fee to cover the cost of prizes. For the rest of the spectators, entry was free.

At about 8.30AM, we were ushered out of the competition area for the event to begin. 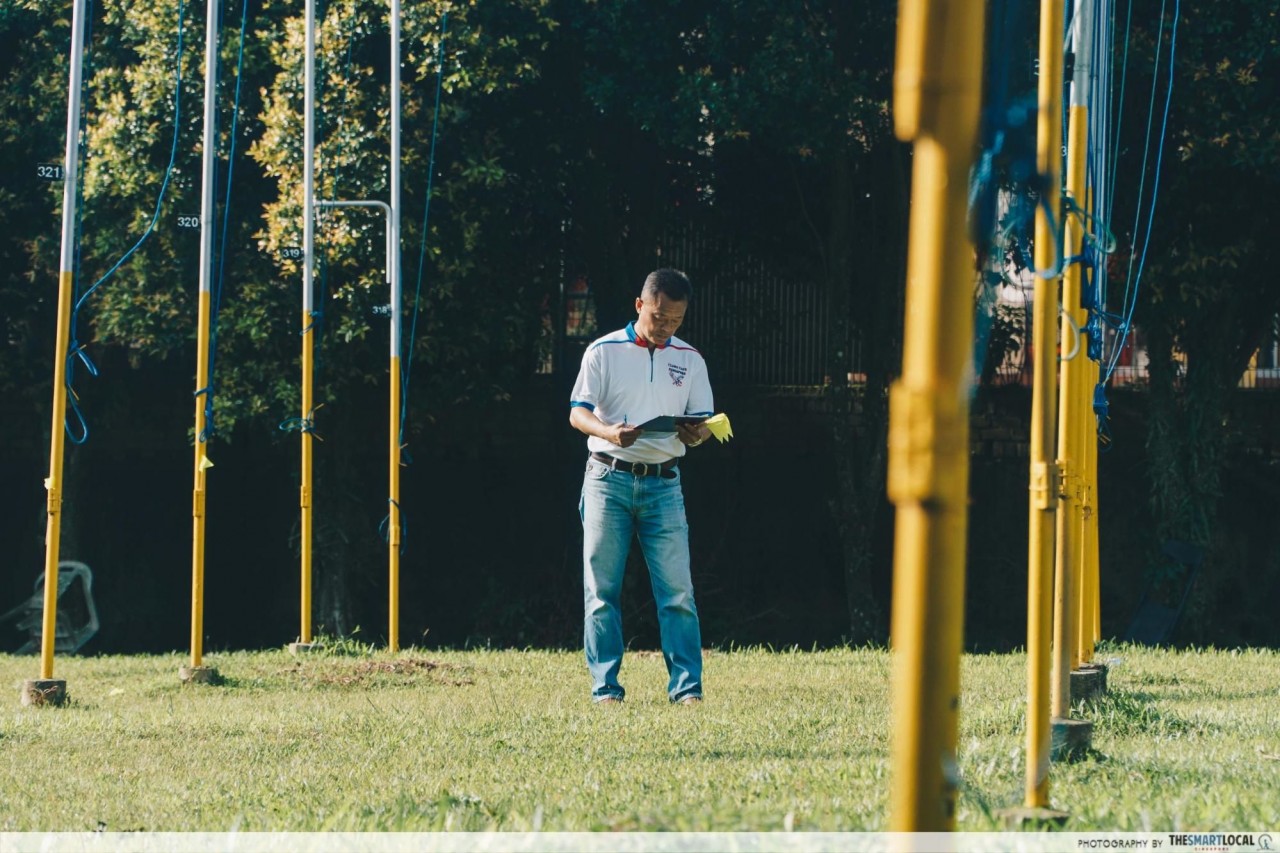 A judge walks among the flag poles.

This competition involved four different species: the merbok, the white-rumped shama, the Chinese thrush, and the red-whiskered bulbul. All we heard was a cacophony of bird song, yet somehow the experienced judges were able to pinpoint the source of each sound, even from a distance. 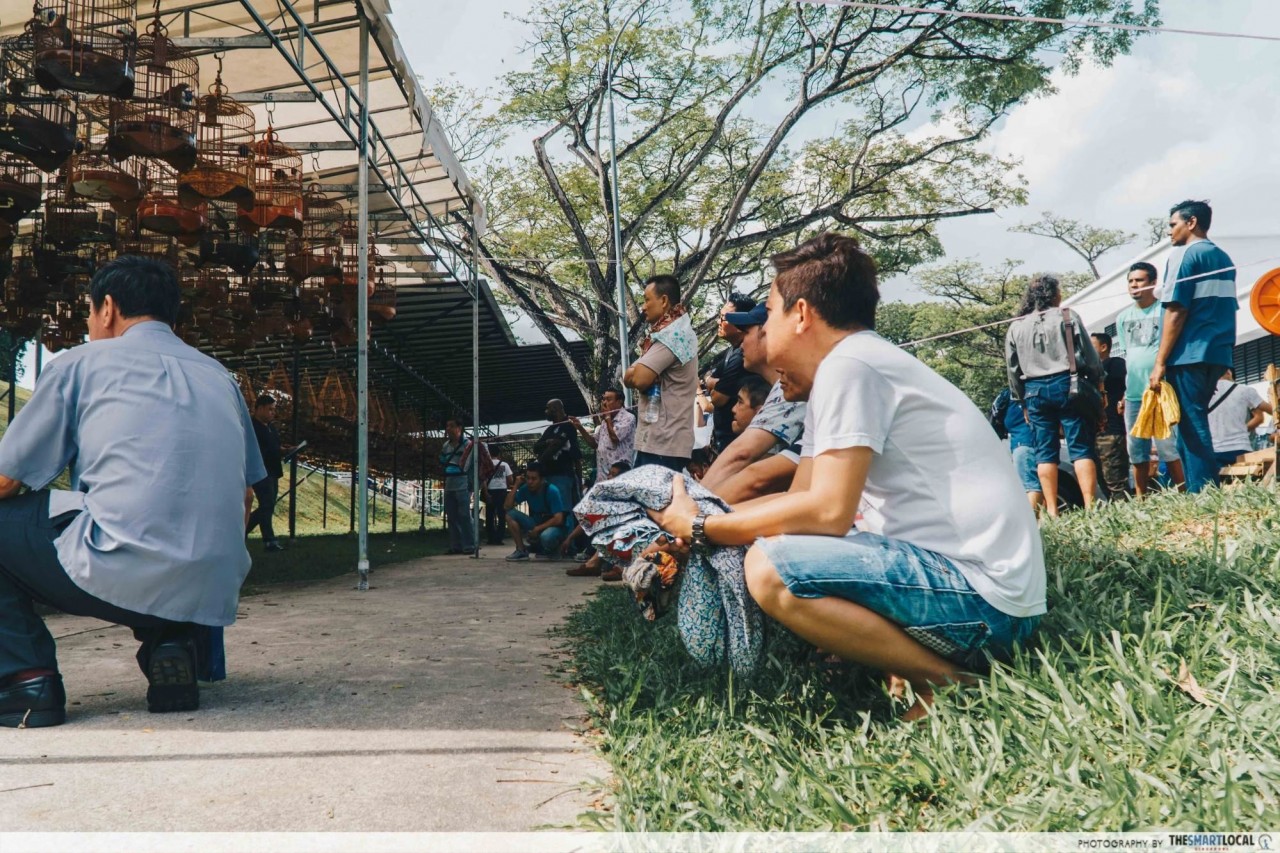 Points were awarded based on criteria like the pitch, the consistency of melody and the concluding tone. There were four rounds and three hours of judging. During this time, the bird owners hung out nearby and chit chatted, careful not to disturb the birds with too much noise. 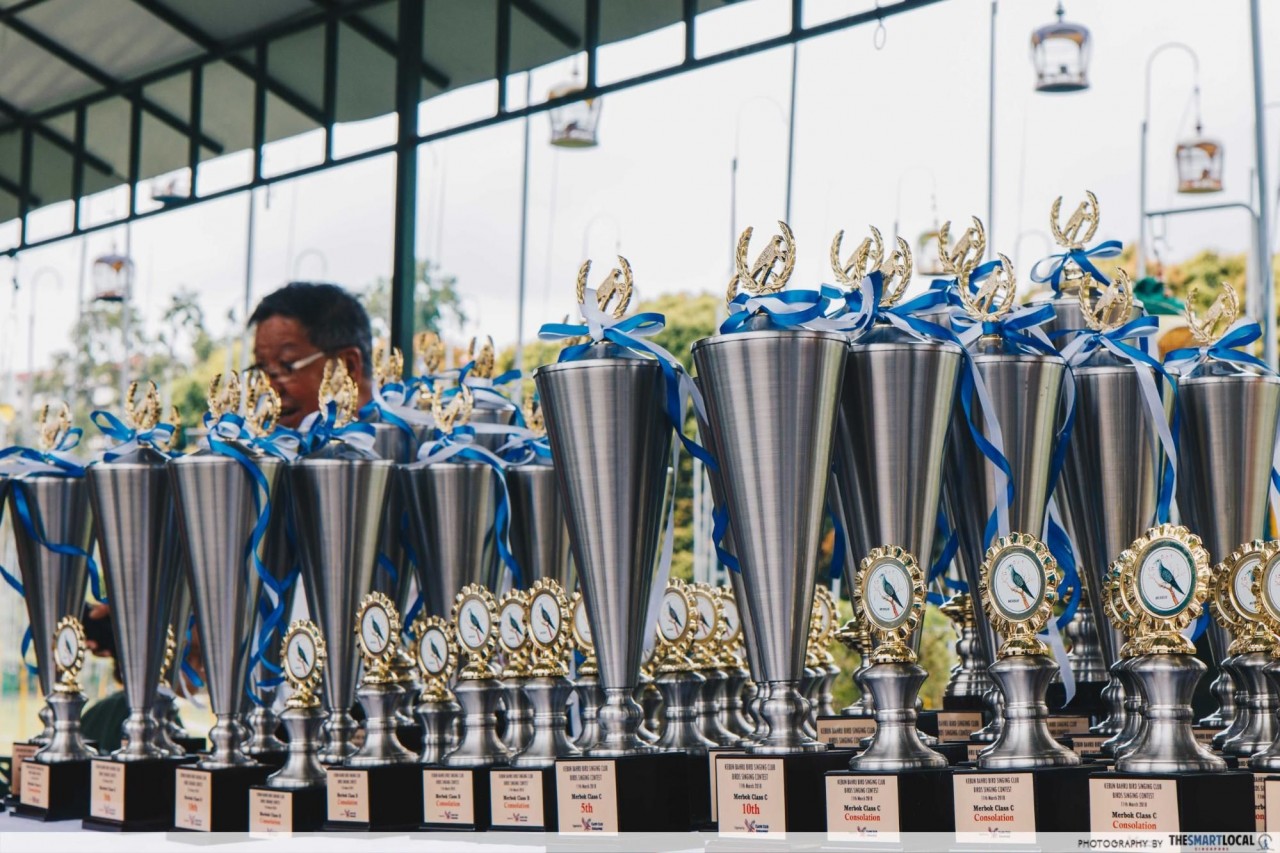 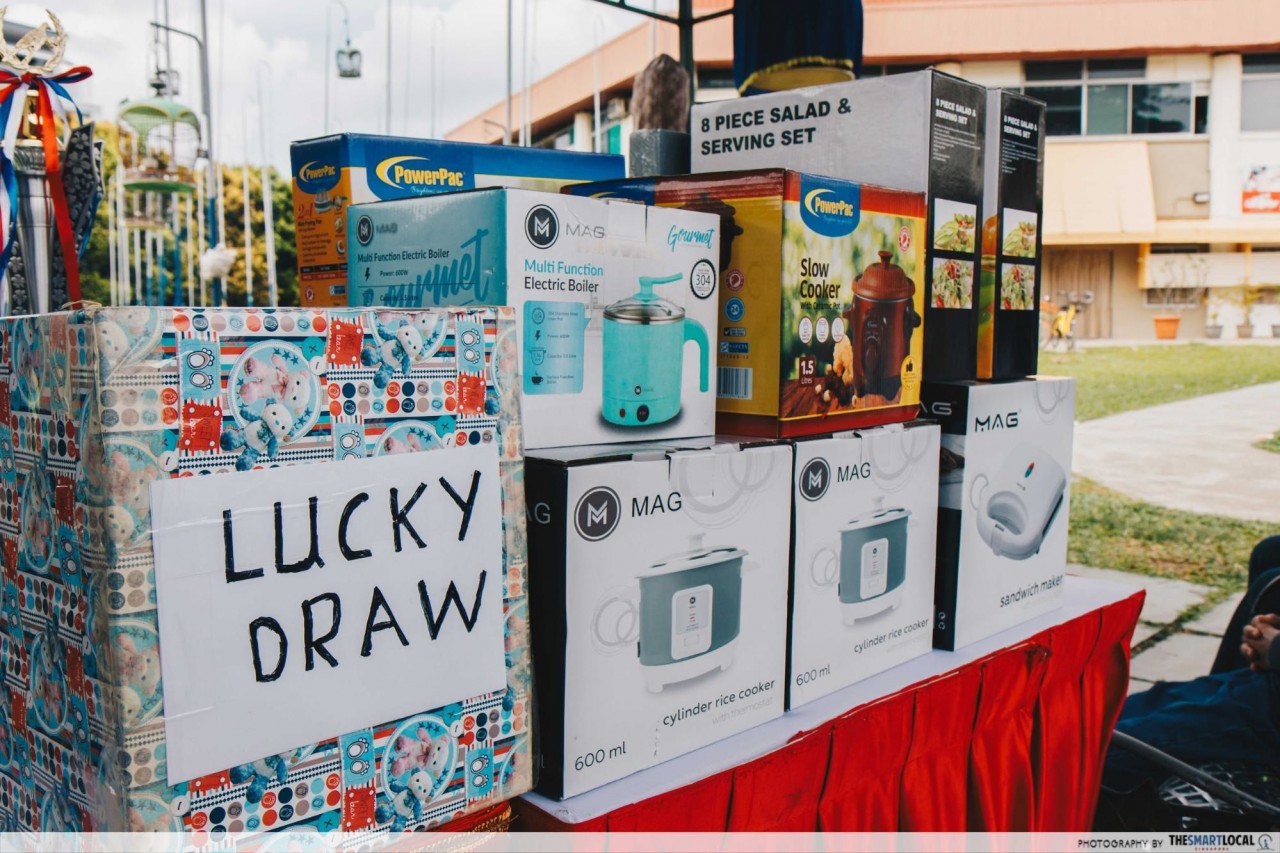 A lucky draw is conducted before the prize giving ceremony.

After the judges deliberated, the bird owners eagerly gathered to hear the outcome. It was a happy affair. Those who won received their awards with proud grins, and those who didn’t congratulated their friends with cheers and claps on the back. The competitions are held once or twice a month, and when the bird owners left, they were already looking forward to the next event. 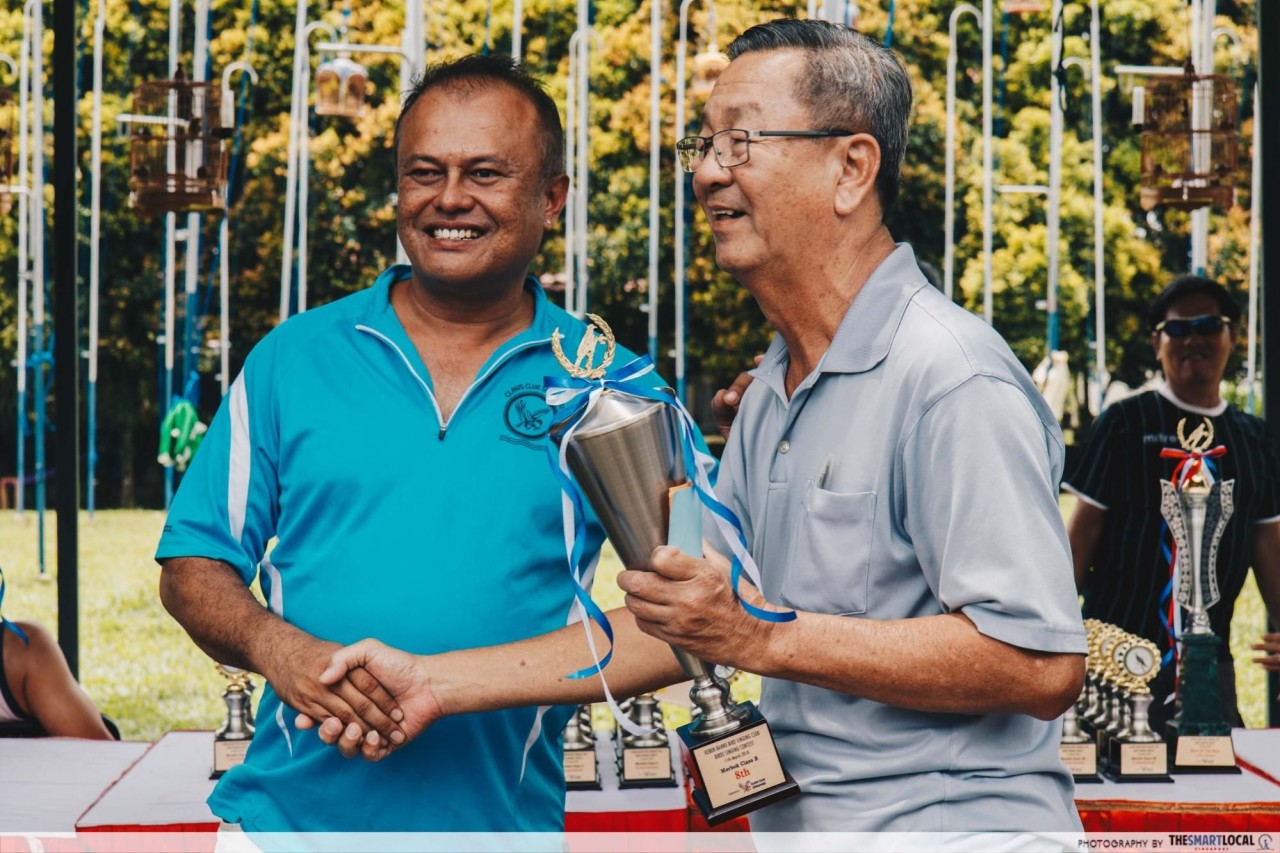 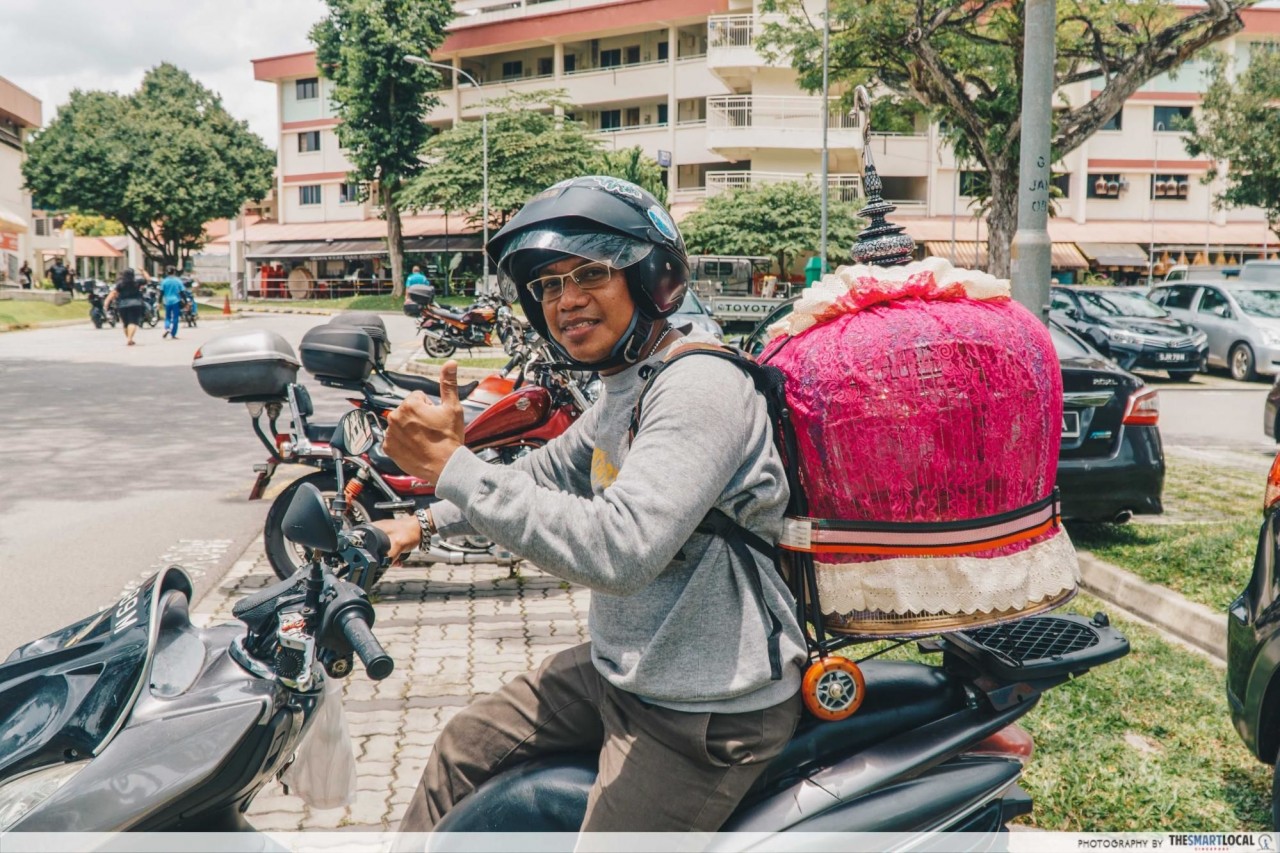 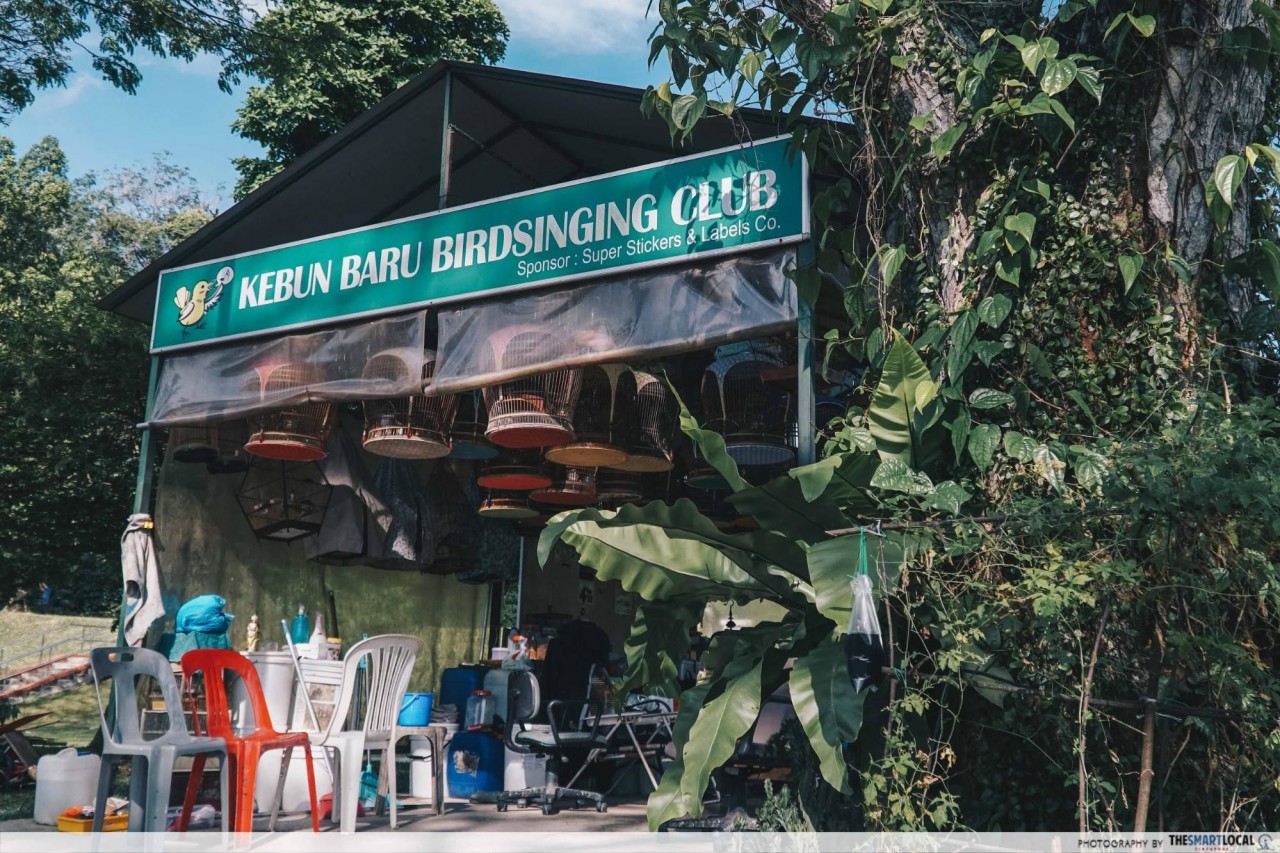 Birdsinging might seem like an unusual pastime for many, and it’s easy to assume that the Kebun Baru Birdsinging Club is an obscure and dying group. But this unique piece of Singapore’s old kampung culture is still very much alive, and there are members from all walks of life with their own stories to tell.

So don’t just write off the quaint little corner as a place for the elderly. Take some time to visit the next time you’re free on a weekend morning. Even if you’re not a bird owner, the folks here are super friendly, and the homely ambience will make you feel welcome right away.