Interesting things to do and see in AMK 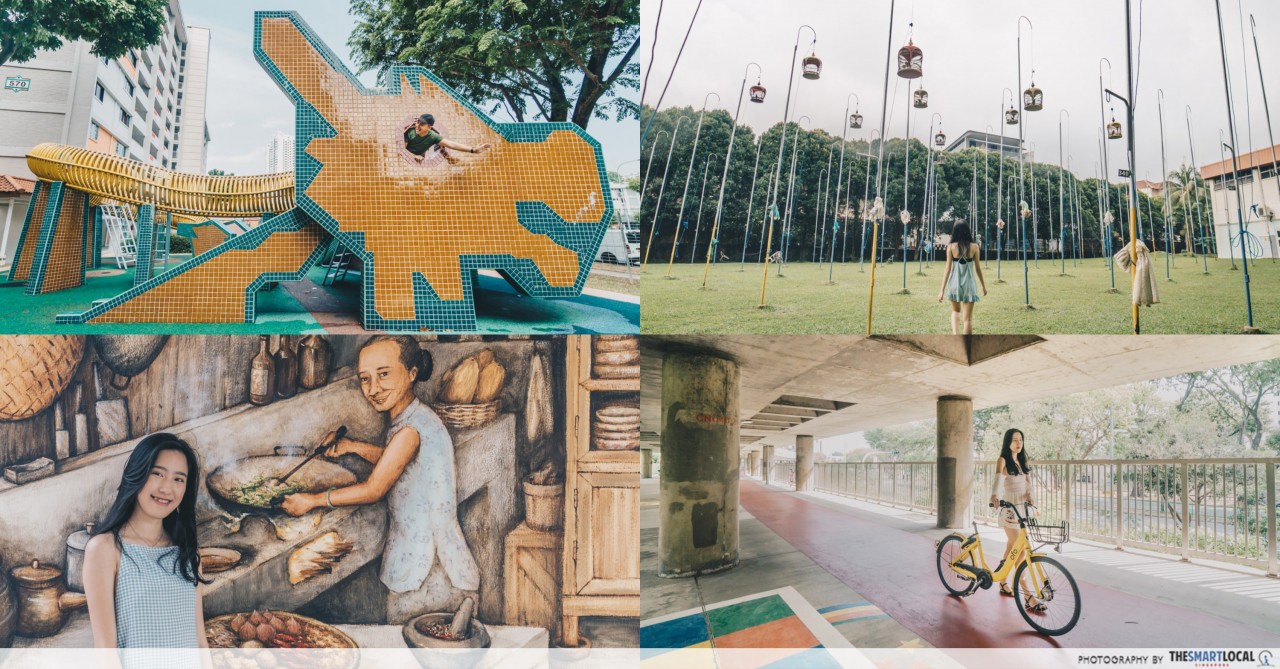 Besides the occasional mention of Ang Mo Kio (AMK) as one of the “OG” heartlands in Singapore, you don’t really hear about AMK all that much. The seventh housing town built by HDB, the estate received the Outstanding Building Award from the Singapore Institute of Architects in 1983.

But its upstanding reputation is not all this estate has to offer. From cool cultural sites to the perfect exercise spots to live out your #fitspo dreams, here are 9 spots and activities in AMK that you’ve probably seen before but not fully utilised.

Fun fact: Although AMK was officially named after a bridge built in the mid-1800s, it also translates to ‘tomato’ in Hokkien. You’ll find giant tomato sculptures around AMK – a rather comical play on the town’s name and colourful history.

1. Relive your childhood in the Dragon Playground 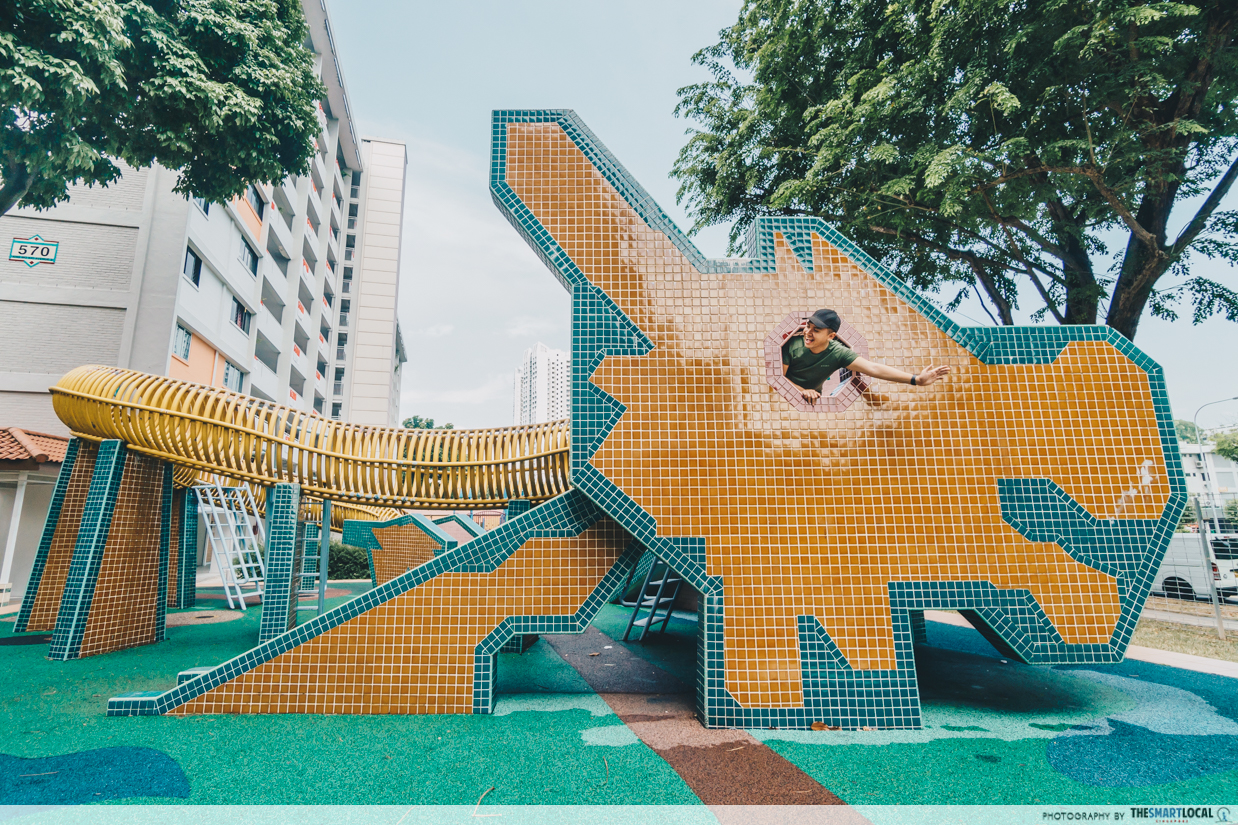 This rubber-matted Dragon Playground is just as much a staple feature of AMK as the sand-based one is for Toa Payoh. It was constructed as part of the government’s 1978 initiative to spice up the neighbourhood with a little bit of ingenuous fun for the kids, making it older than most of us millennials.

Despite decades of wear and tear, this playground retains its original features and colours – it’s the perfect backdrop for a #throwback shot even in its present state. 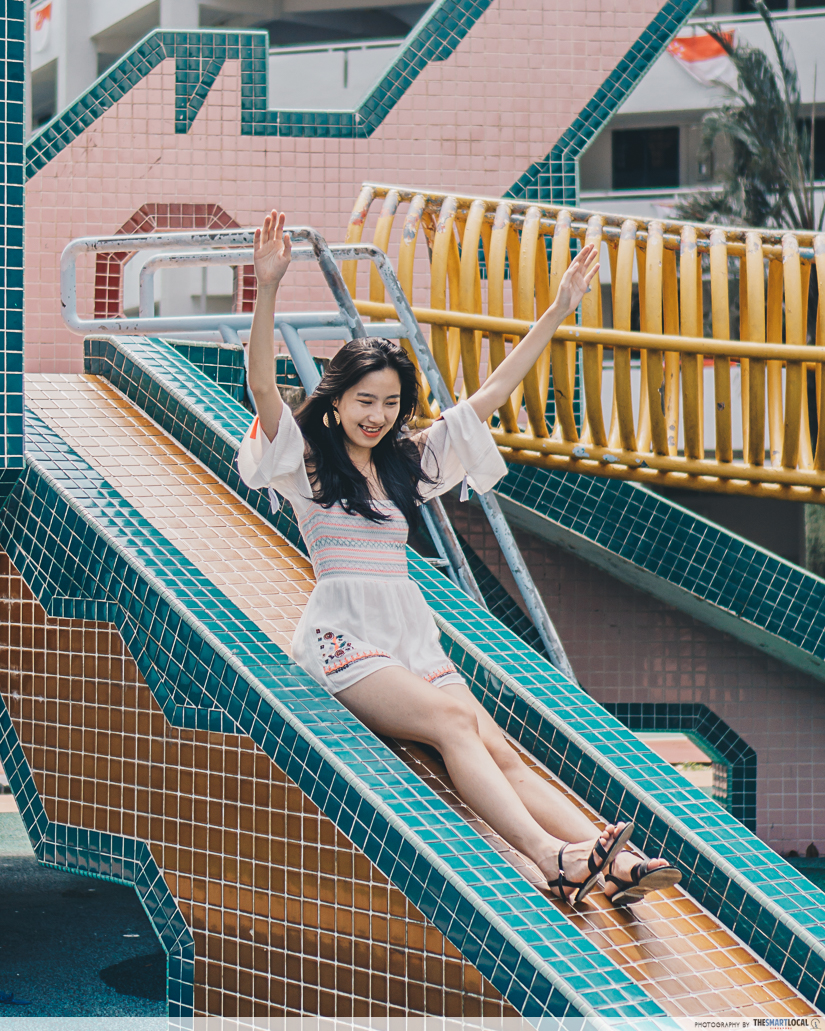 Relive your adolescent days by sliding down the slides and take a few photos for keepsakes while you’re at it.

Directions:To get here from AMK MRT, head south towards Ang Mo Kio Ave 3 from the MRT exit, and then turn left and walk straight all the way till you reach the playground.
Address: Blocks 570-571, Ang Mo Kio Ave 3, Singapore 560570

2. Bike along the Park Connector Network under the MRT Viaduct 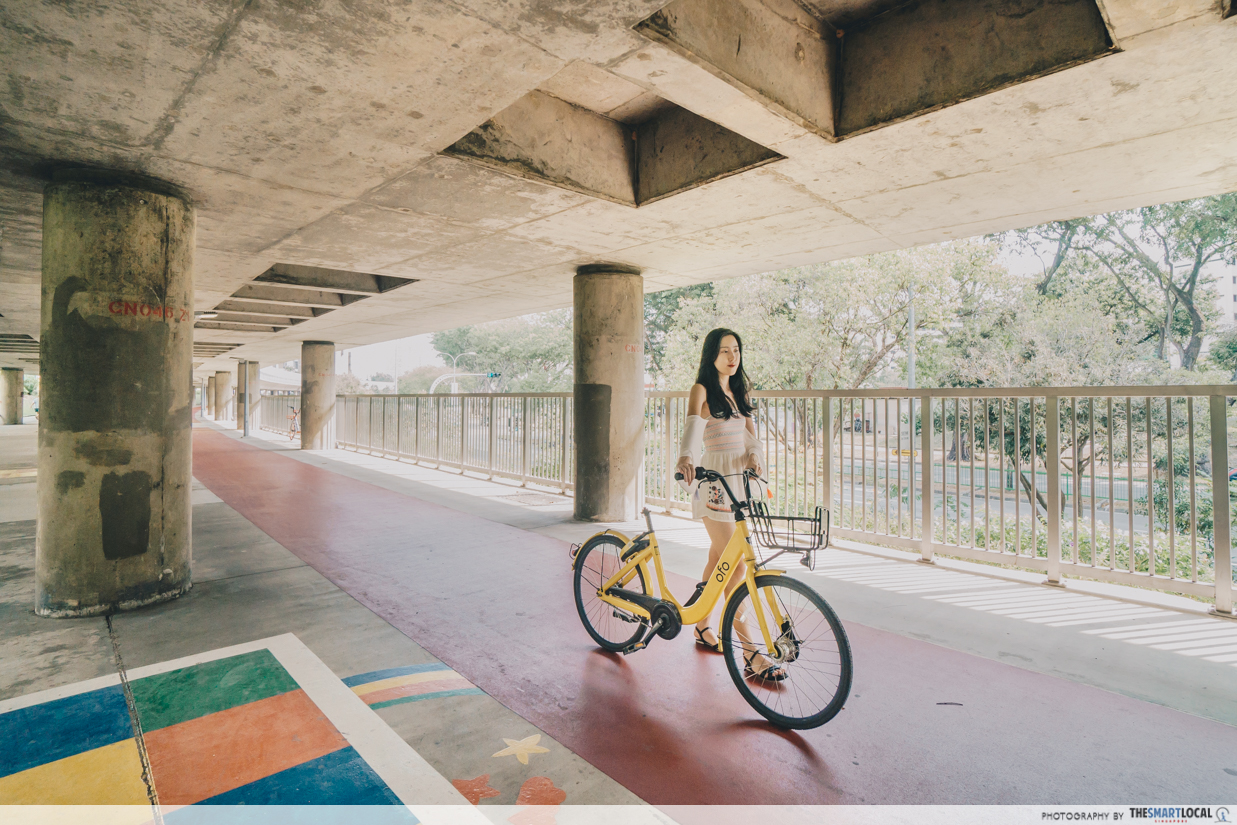 Bet you didn’t know there’s a Park Connector Network with cool murals right under the MRT tracks! In line with the shift towards a car-lite nation, this park connector was added as part of AMK’s transformation into Singapore’s first walking and cycling town. Cyclists can bike along the specially designed cycling paths along the MRT viaduct, demarcated in red, while pedestrians can use this connector as a shortcut to get to their destination. 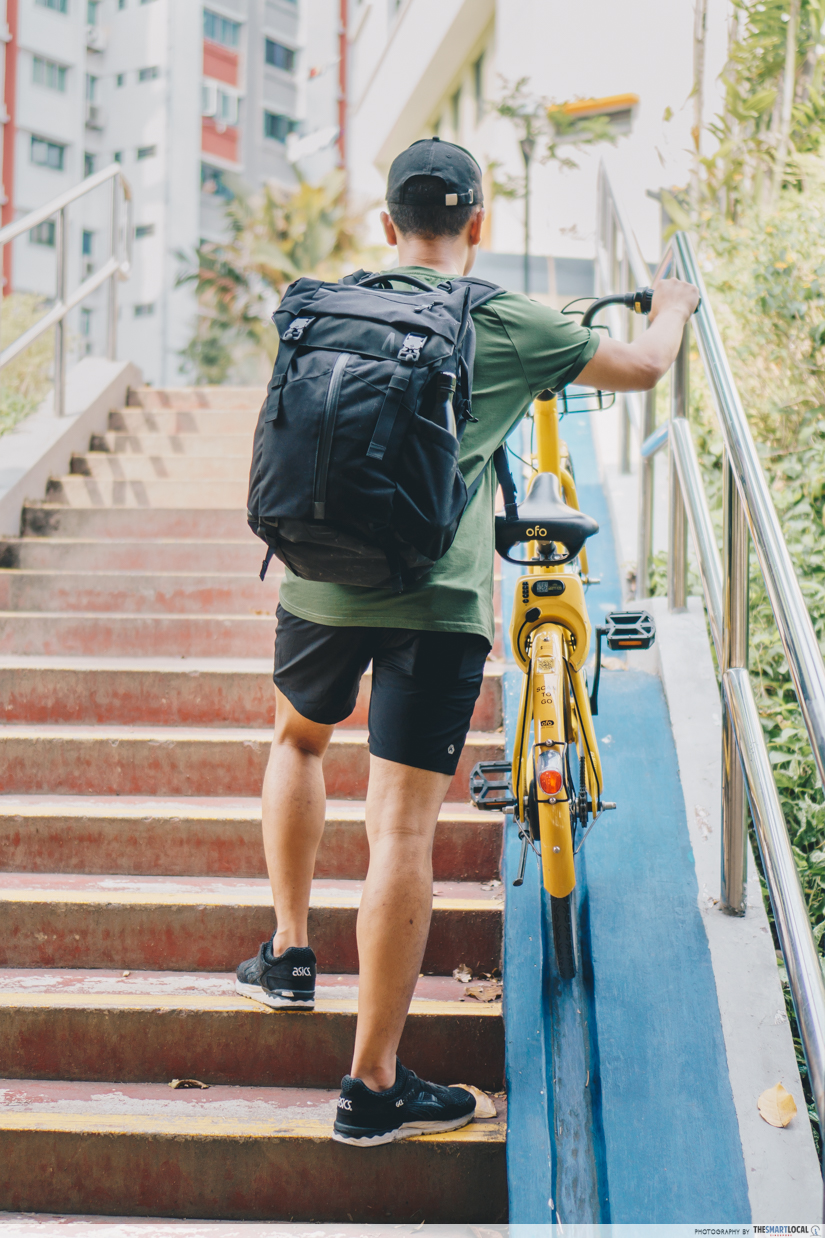 If you need some help transporting your bike up or down the paths leading from the HDB flats to the main road, you can use these handy bicycle wheeling ramps along the staircases instead of hauling the bikes coolie-style. 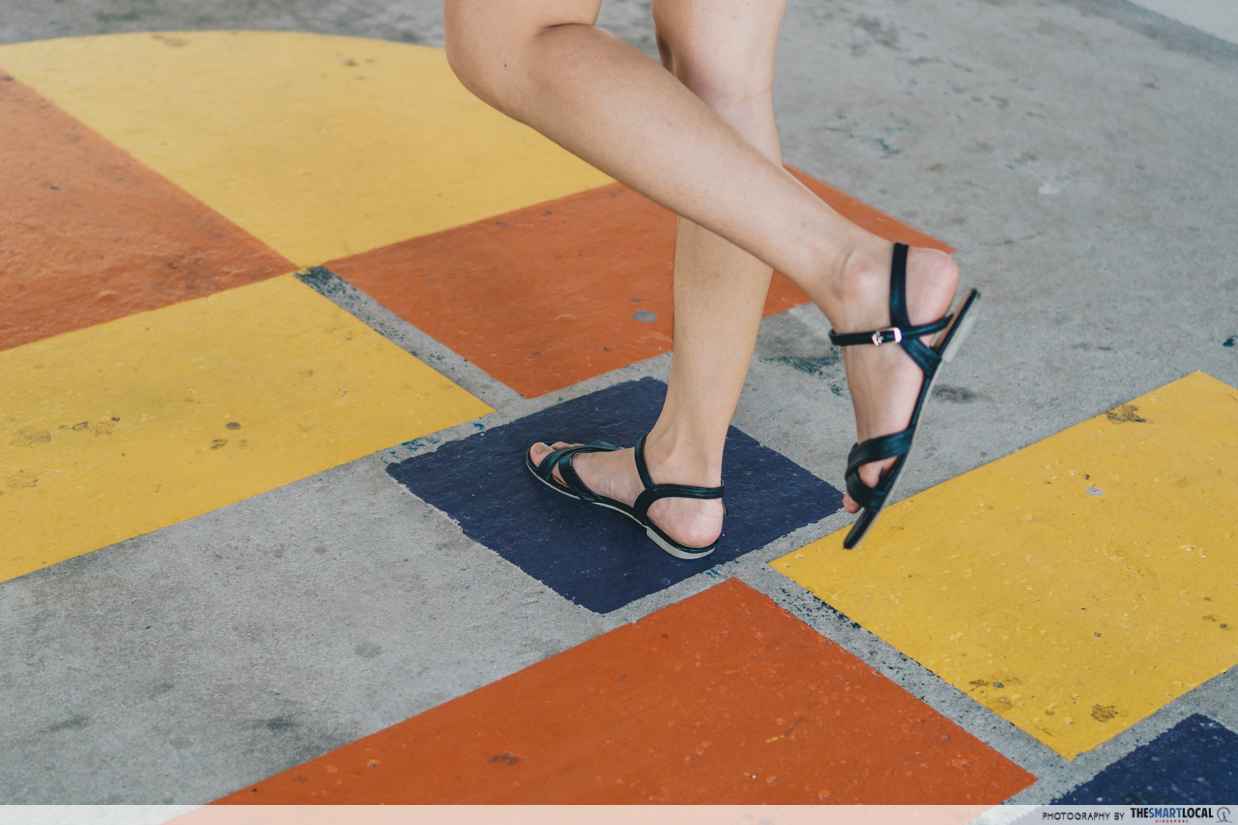 Play some hopscotch with your friends at this hopscotch print painted in the middle of the viaduct while you’re here – completing the entire hopscotch with ease should give you an indication of how seasoned you are.

3. Clock in your weekly workouts at AMK Garden West 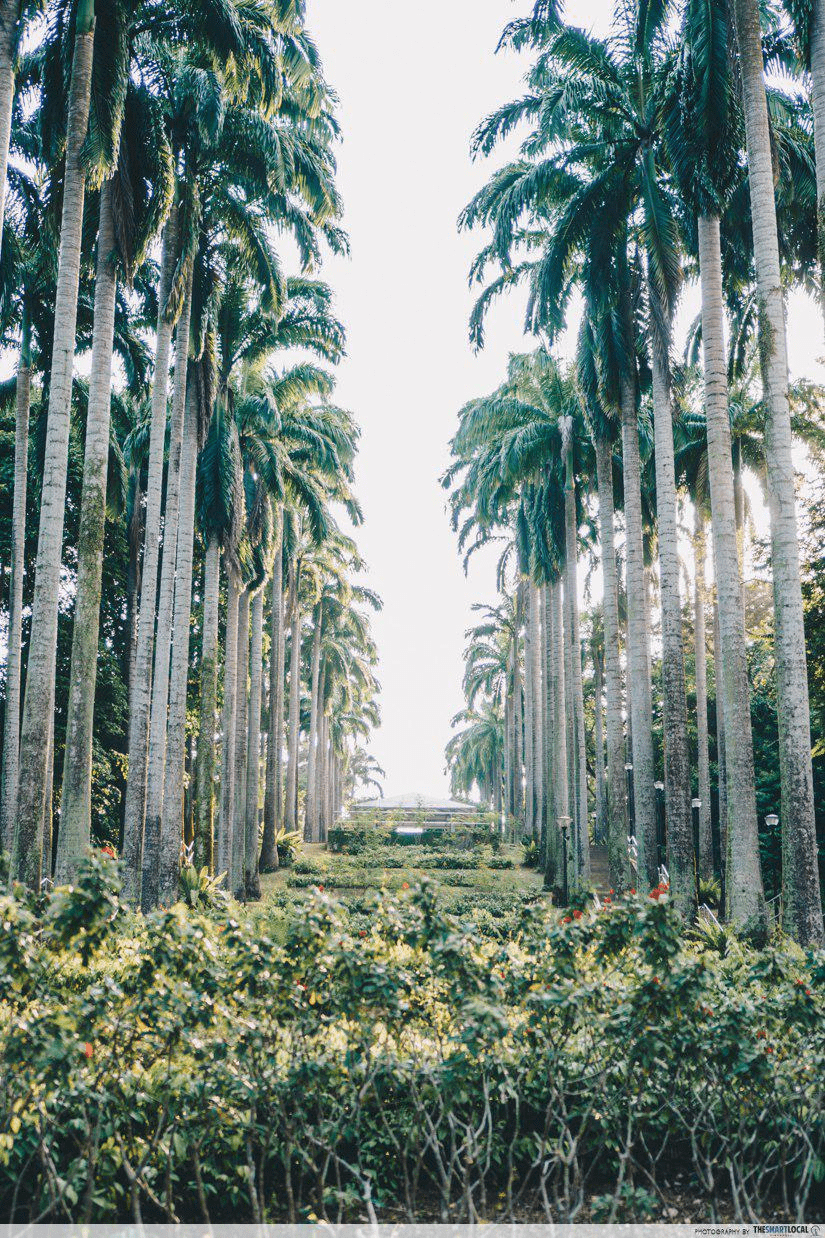 AMK is a greenhouse shrouded in scenic gardens and peaceful parks. The average AMK-ian would probably take this feature for granted, but parks like Ang Mo Kio Town Garden West provide a good respite from school and work. 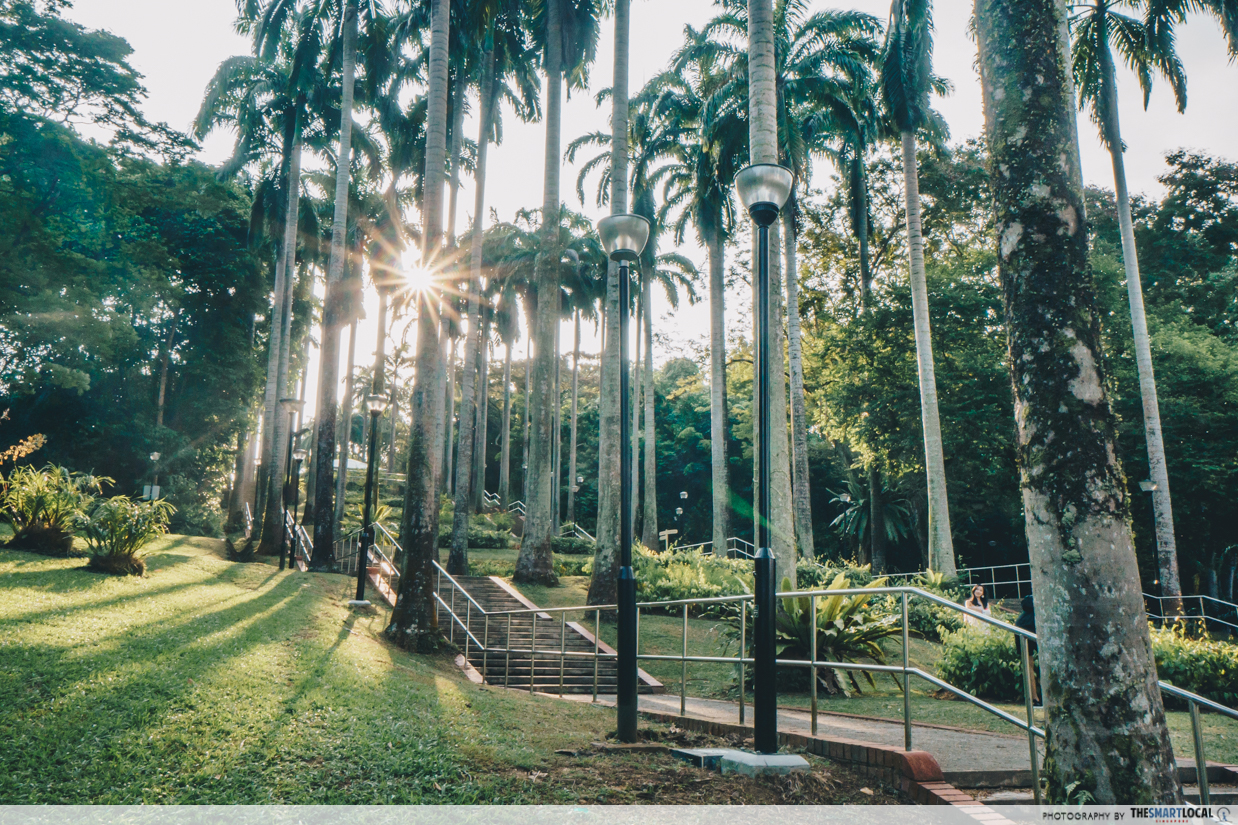 As a park with an uphill terrain, Ang Mo Kio Town Garden West has a long flight of stairs that provides the perfect site for sporty activities. While your legs may not thank you for the #legday workout, it’s definitely worth making a trip in the early evening to jog or brisk walk, with the setting sun lining your path towards #bodygoals. 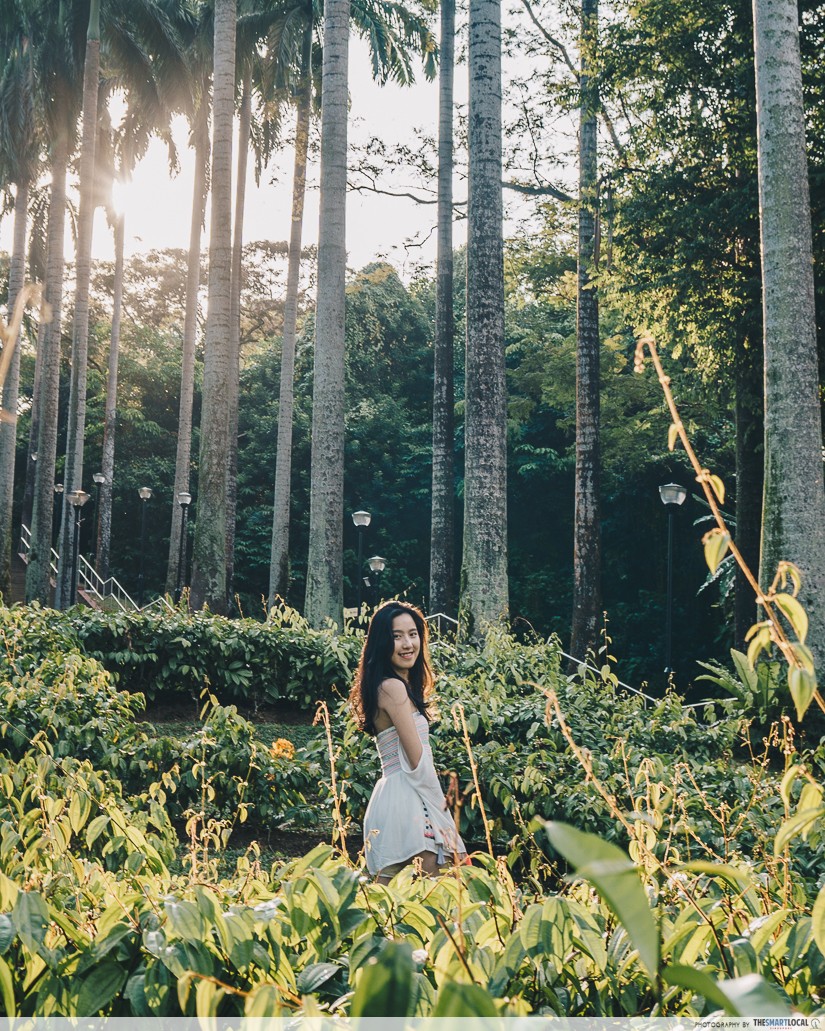 If you’re not keen on exercising, the tall looming trees and shrubbery surrounding the stairs make for an impressive foliage backdrop for a photoshoot. 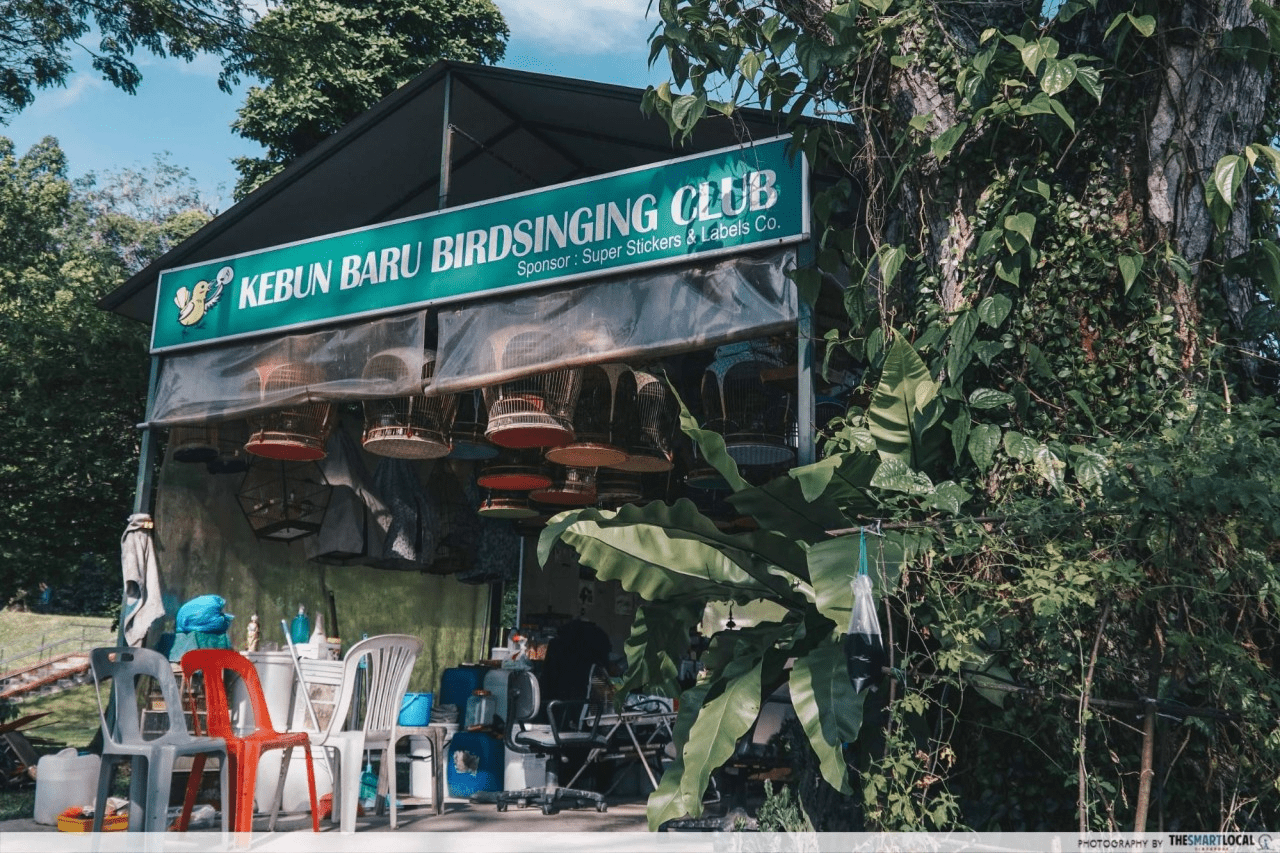 Chirp, chirp. How many of us get to wake up to a melodic choir of birds serenading us awake from our slumber? Only if you stay in AMK. Keban Baru Bird Singing Club started out in the 1980s as a casual birdwatching and socialising activity between a bunch of bird owners. Since then, the club has ballooned into a socialising hub for hundreds of members. 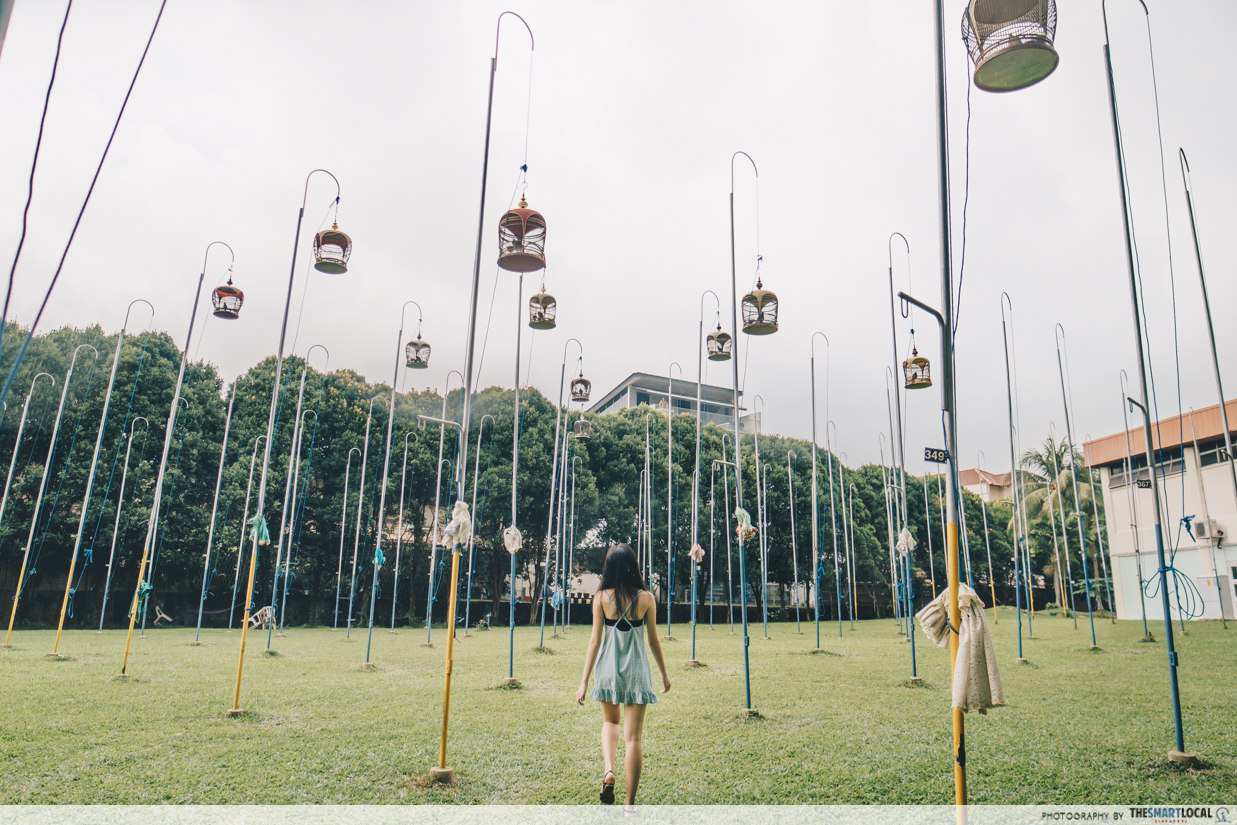 If you’re diligent and curious enough, be an early bird and catch the bird-singing competitions that occurs every weekend. You don’t have to pay a single cent to watch the competitions – just stand around, blend right in and enjoy the music. We met a regular at the club who told us that bird-singing spectatorship is his past time – he’s there every morning till afternoon be it rain or shine. What started out as a bird-keeping hobby for him turned into a one-man bird-singing training business.

5. Do yoga and play with dogs at Bishan-Ang Mo Kio Park 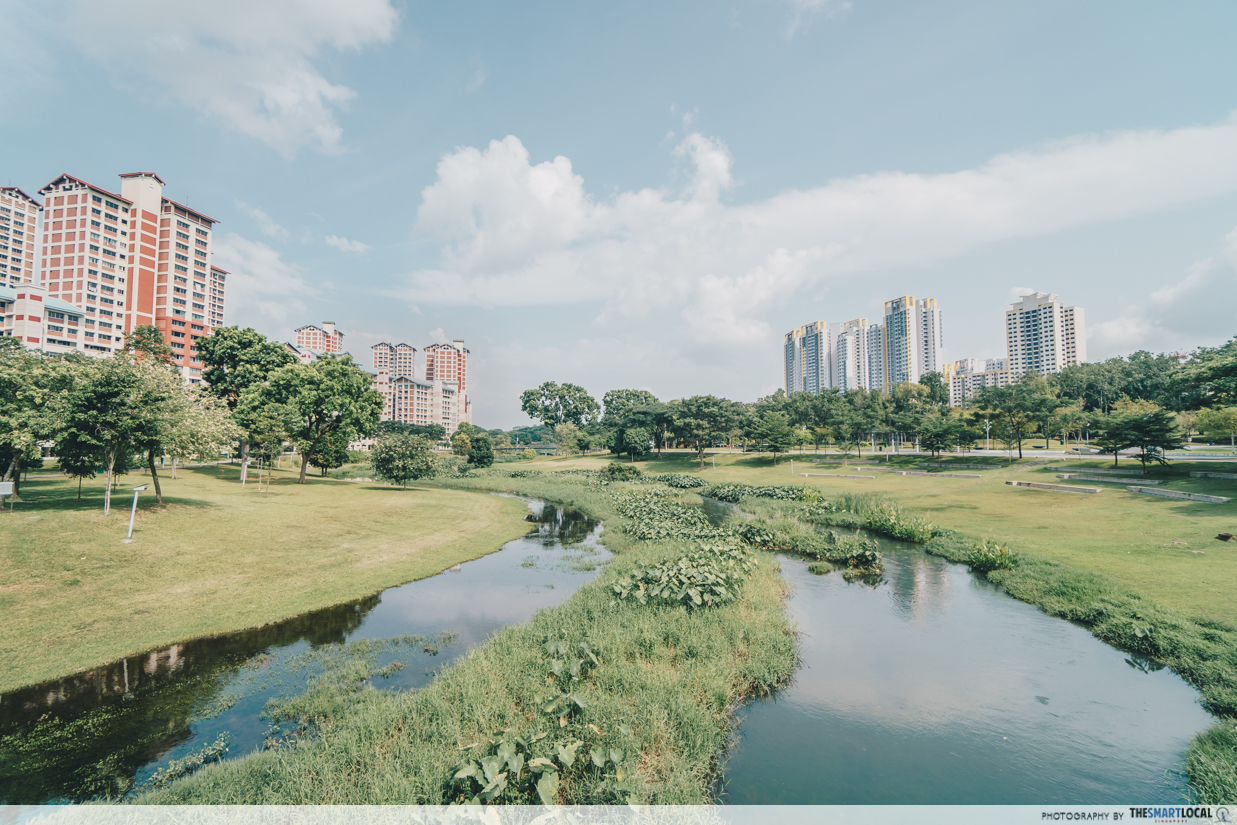 Bishan-Ang Mo Kio Park shares its namesake with the neighbouring town of Bishan and can be seen as a bridge between the two towns.

This park is the perfect spot for all your outdoor athletic endeavours, romantic dates and wholesome family fun. Or, you know, for a nice photo or two. The sheer amount of activities you can do here is non-exhaustive, but we’ve narrowed down to a few stand-out activities for your convenience.

Let your dog run free in the dog-friendly park 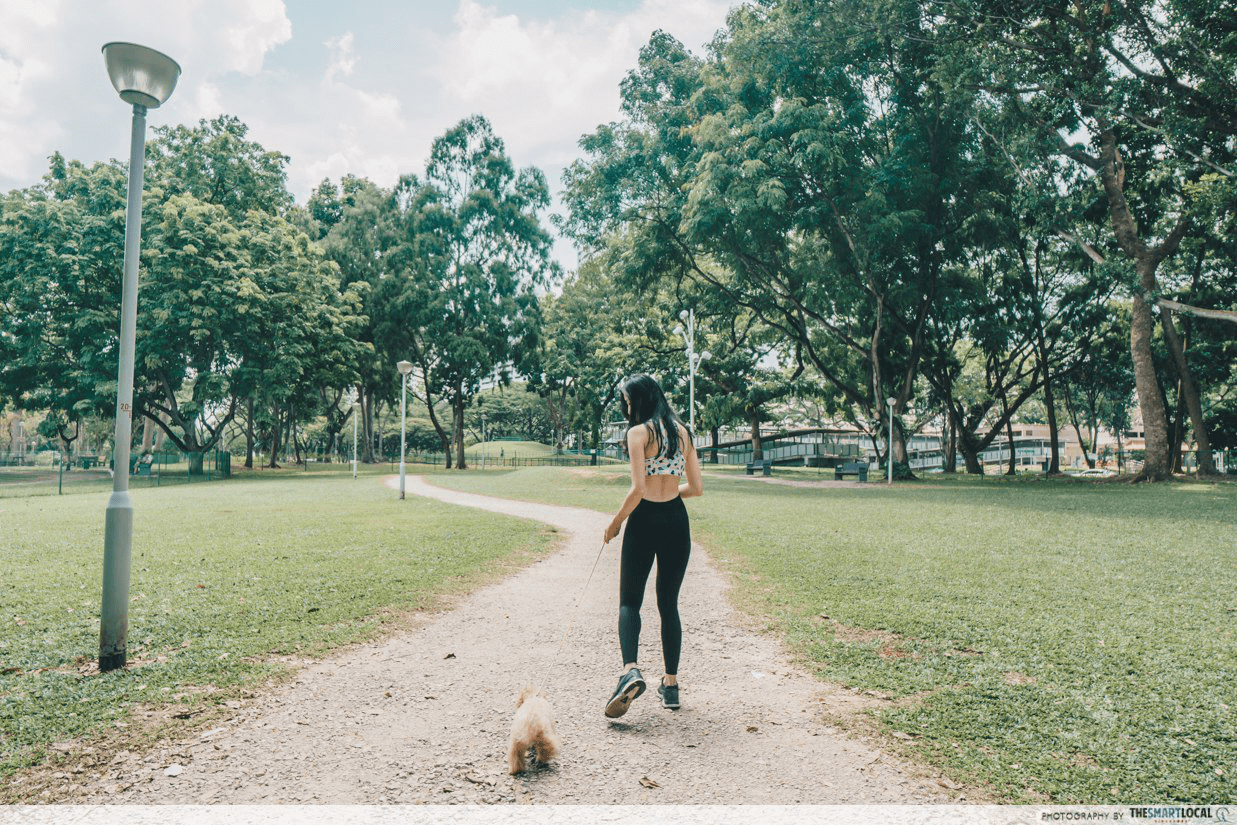 Event venues at Bishan-Ang Mo Kio Park have been designed to accommodate diverse uses too. You’ll even find pet-friendly features like dog run paths and a drinking fountain for pets here! 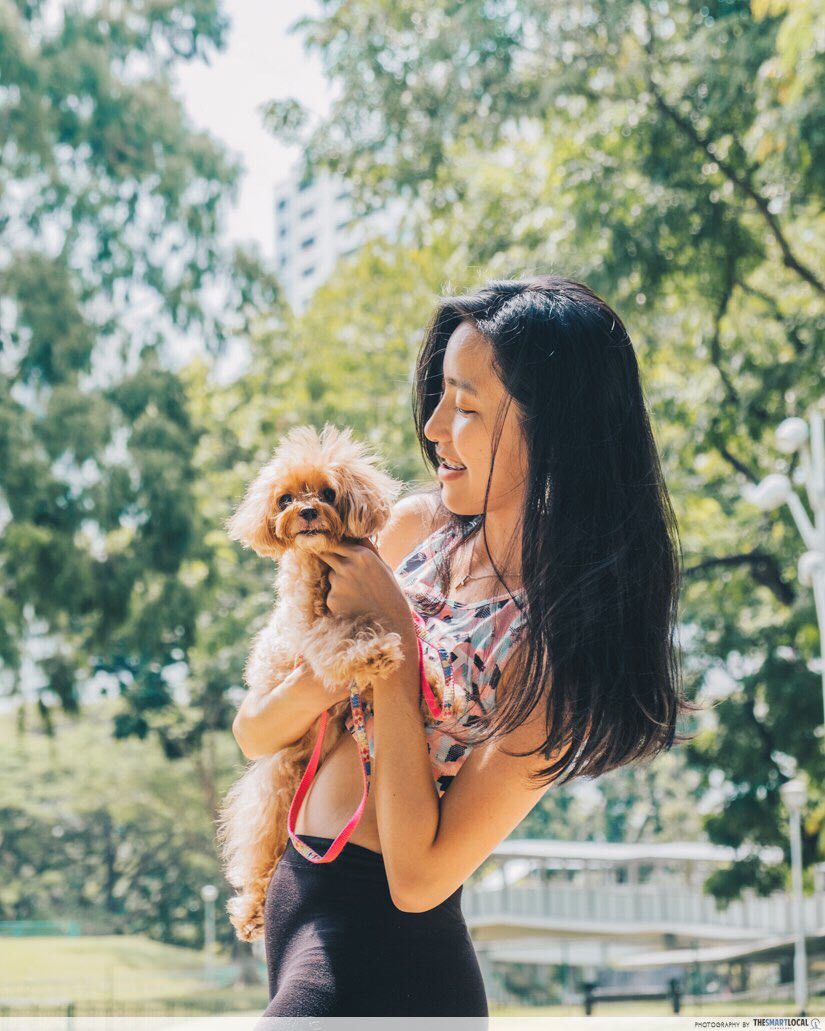 Dog owners and dog lovers alike gather in the late afternoons or during the weekends to see dogs engaging in friendly play in designated Dog Runs, which are enclosures for dogs to run about and interact with other dogs. There are two Dog Runs, one for smaller dogs and one for bigger dogs.

Stroll along the Cleansing Biotope

Huh – what is a Cleansing Biotope?’ Don’t worry, folks. Despite its chim sounding name, the Cleansing Biotope is actually a long meandering waterway with some very special types of plants which act to filter the water in the park’s ponds and rivers. 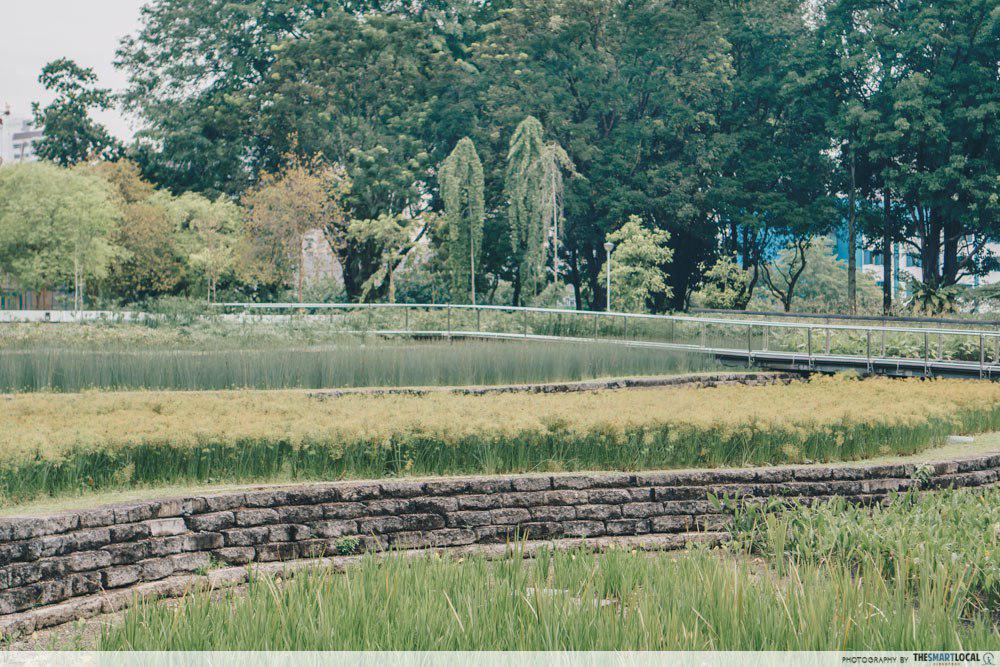 Important function aside, the rows of plants sitting atop the glistening streams make for a captivating treat for the eyes.

Yoga in the park 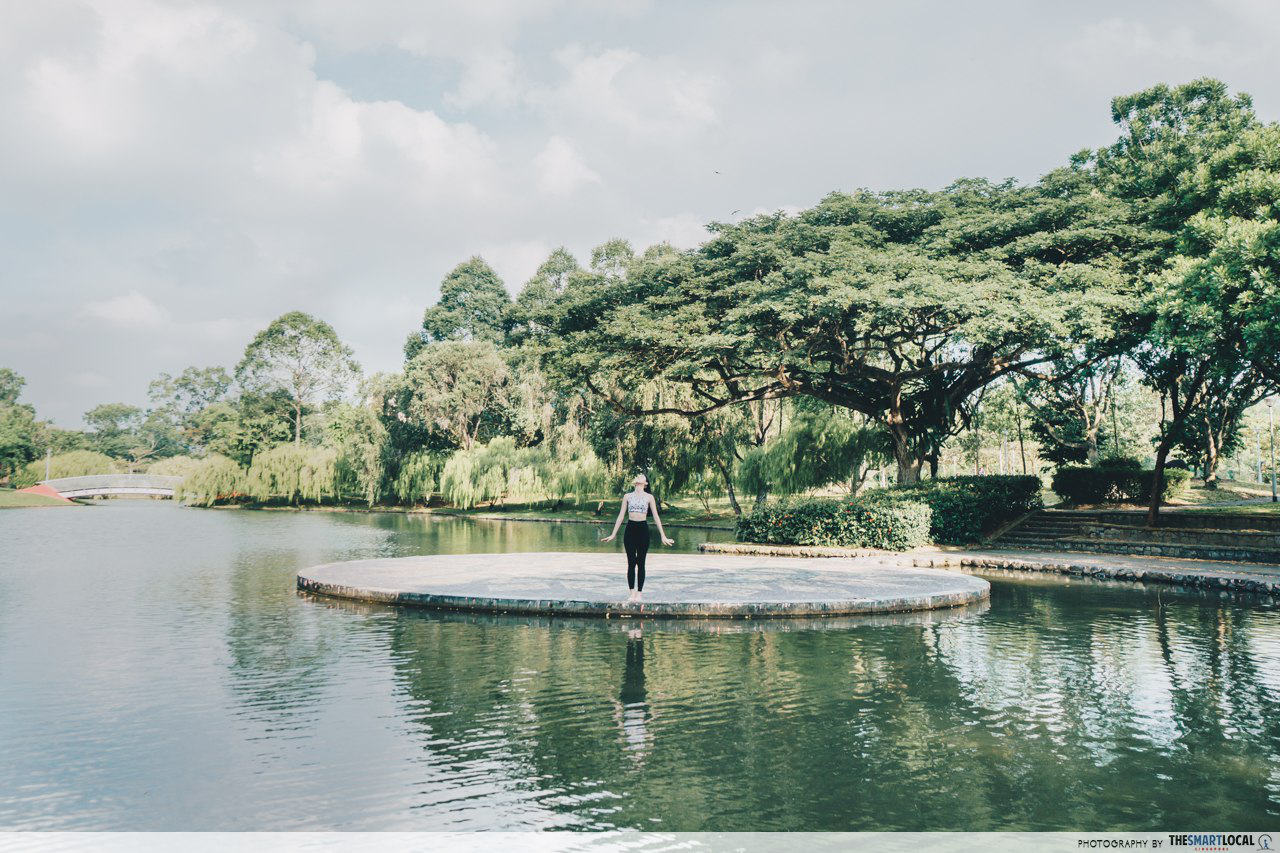 One of the best things about the park is its tranquil nature especially during weekday mornings, making it a perfect place for an early yoga session. 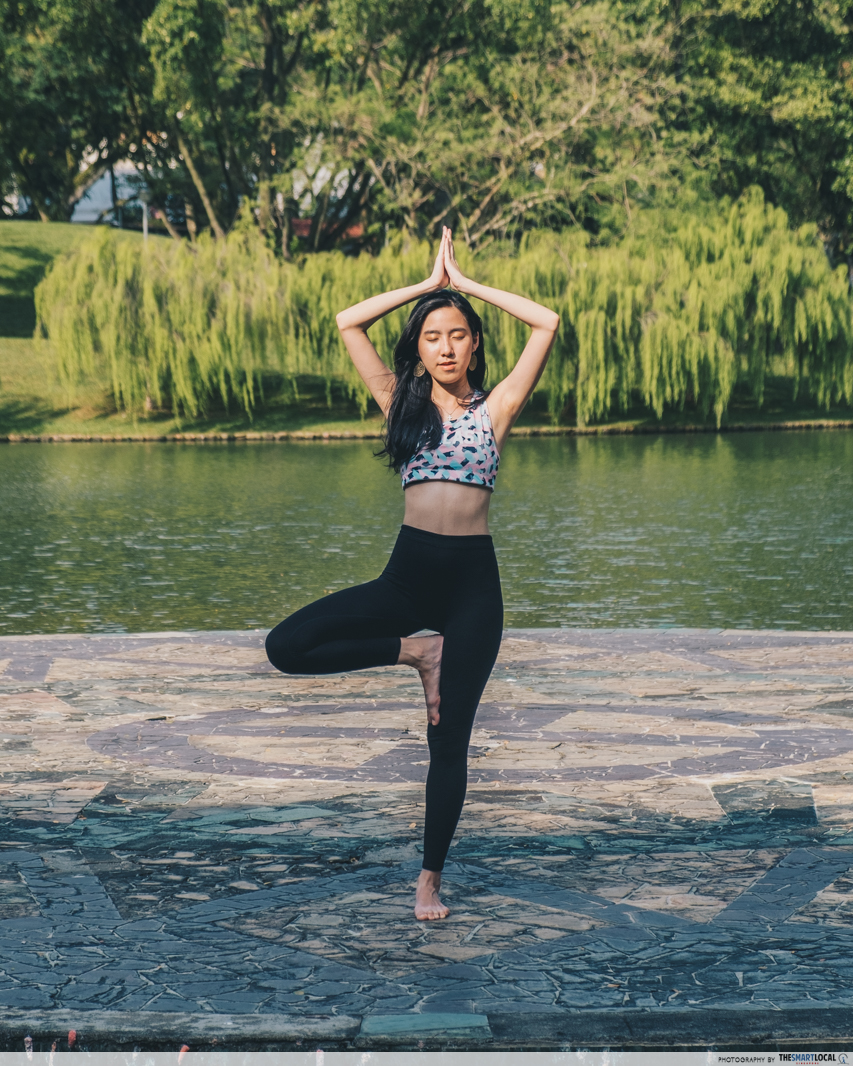 Channel your inner yogi at the Landscape Pond – meditate in stillness in the middle of the circular platform or stretch your hamstrings with an extended triangle pose.

That, or you can jio your family members for the Outdoor Family Yoga that occurs every 2nd Sunday of the month.

Recycle hill ‘An enclosure for a swing’ 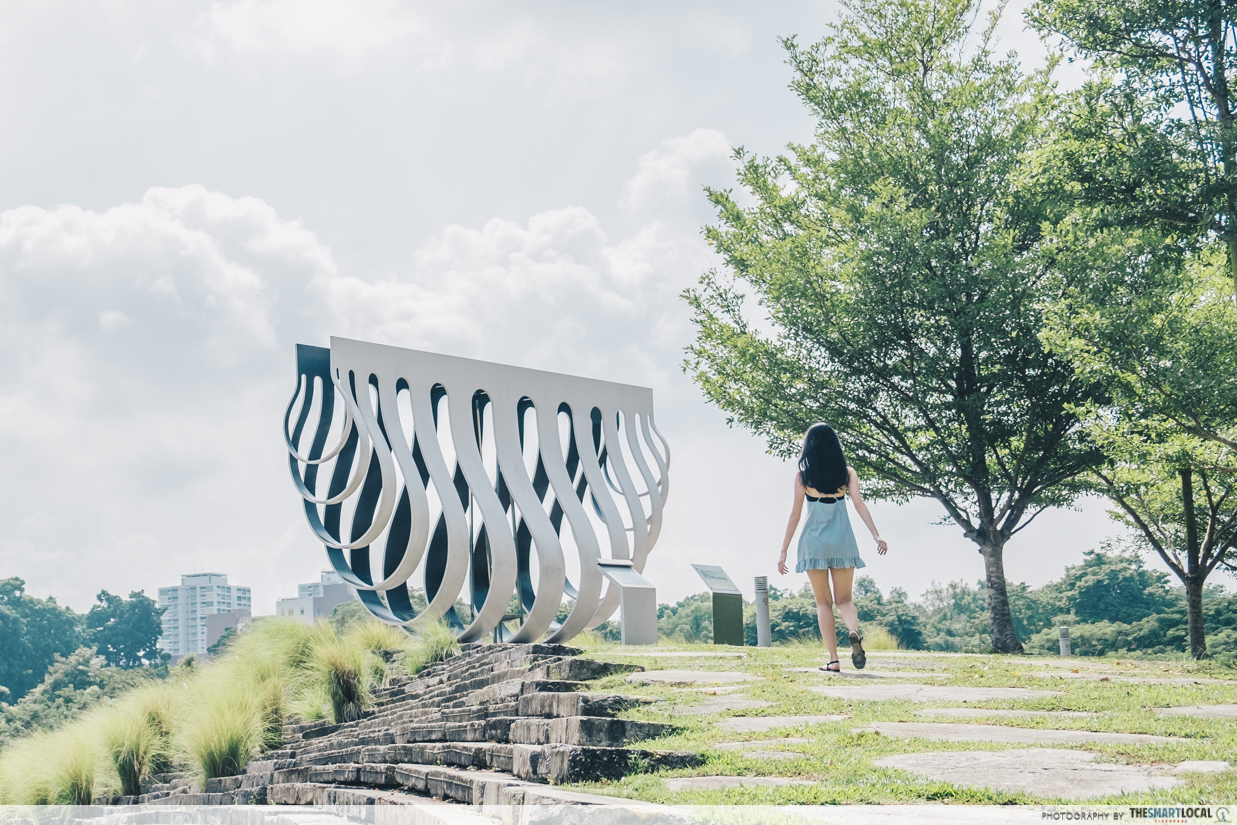 An Enclosure for a Swing is a metal sculpture constructed in 2011 by local architect Kelvin Lim Fun Kit. Perched atop the hill overlooking the park, it looks like an odd fixture at first glance, but it’s actually symbolic of the park’s status as a sanctuary away from the city buzz. 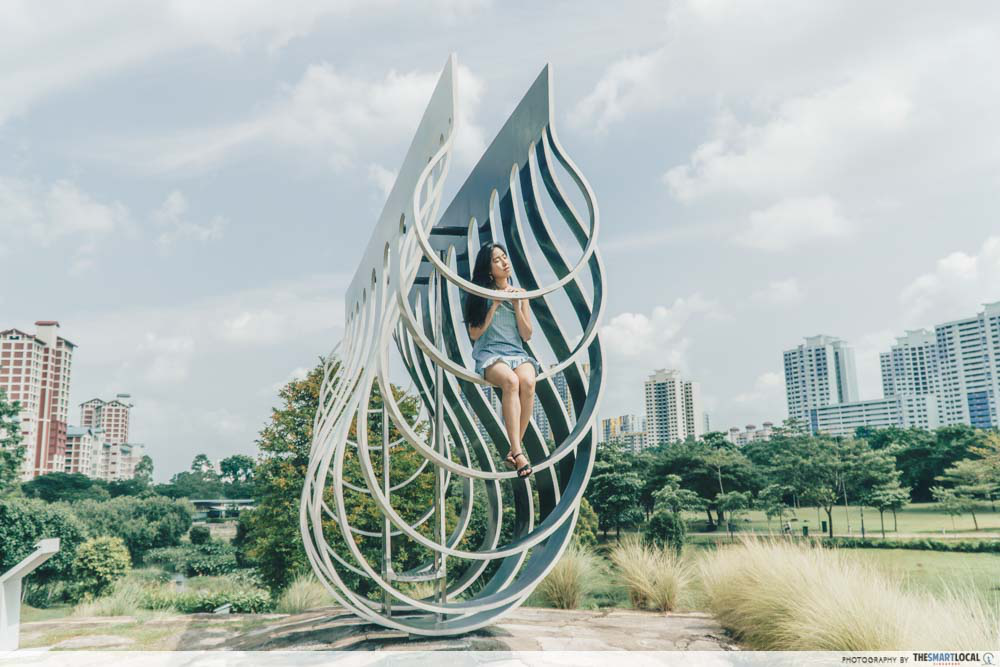 True to its name, ‘An Enclosure for a Swing’, the curved exterior is shaped like a skeletal body which envelopes the metal swing within, almost as if protecting it from the elements. 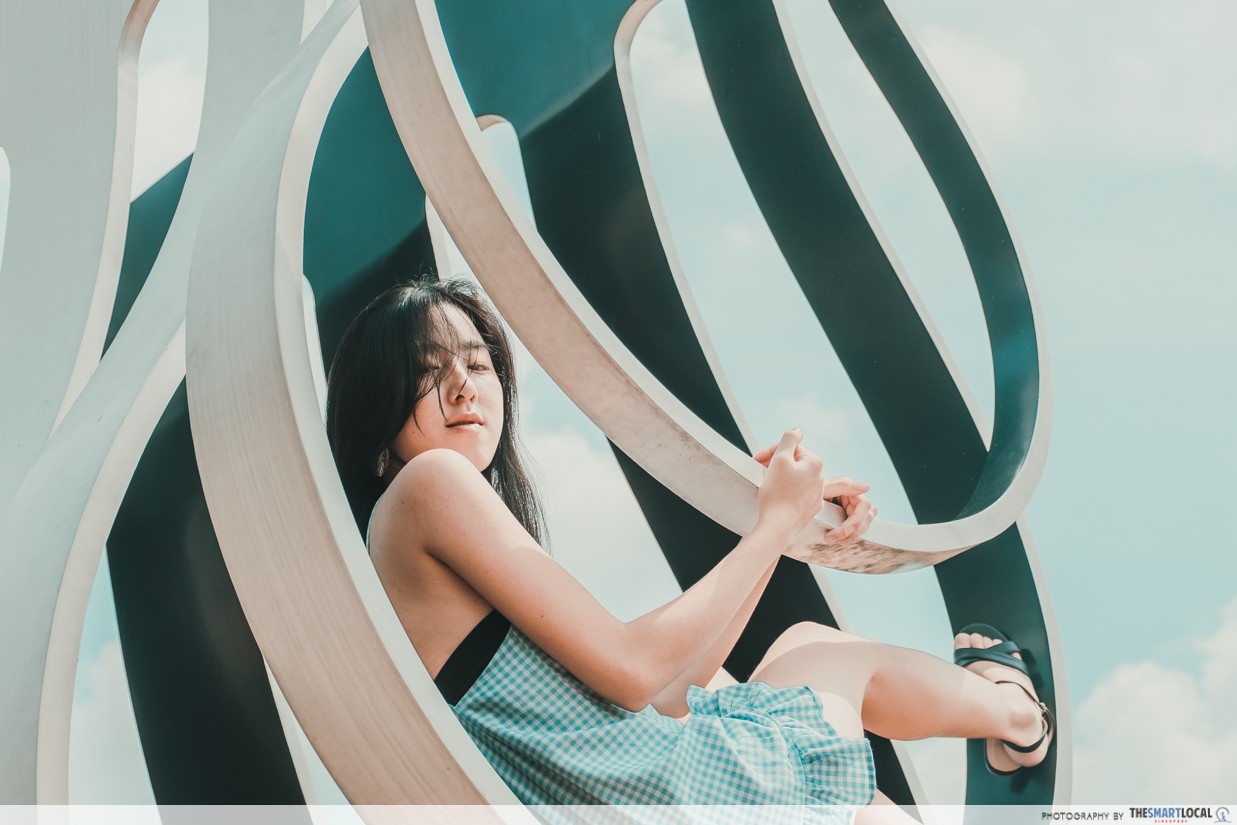 You can actually explore this sculpture (with care, of course) and take a few artistic shots here.

6. Stargaze for free with Sidewalk Astronomy

If you love the moon and stars as much as I do, you’d probably be piqued to know about the good work that Sidewalk Astronomy has been doing to resolve our first world ‘Singapore got so much light pollution, how to see the stars?’ problem. 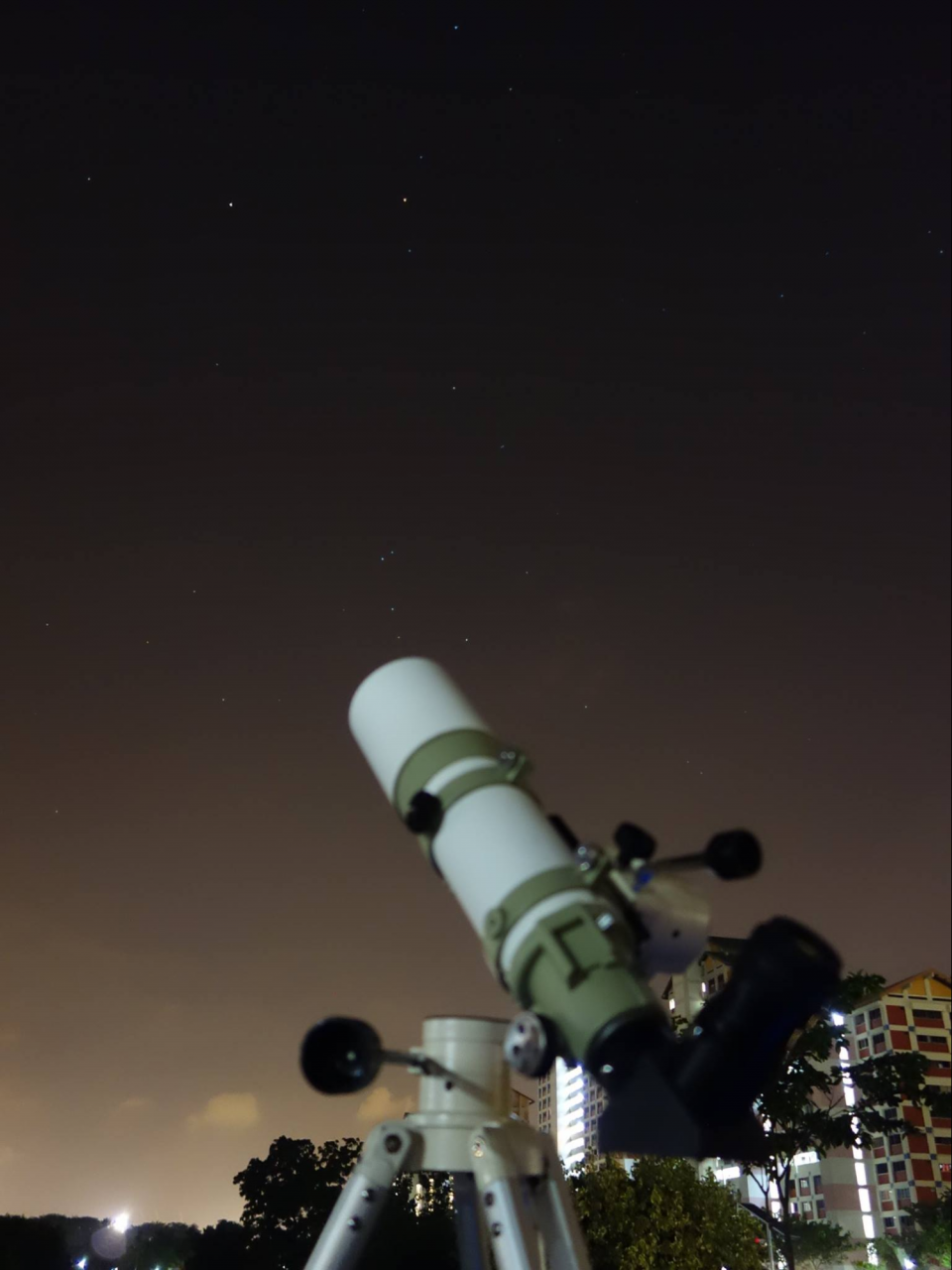 The non-profit organisation normally holds stargazing sessions at Bishan-AMK Park outside McDonald’s – complete with telescopes provided for by the organization and great company.

7. Do a heritage-themed photoshoot with murals at AMK Town Council

AMK Town Council may not sound like the most insta-worthy place – but ever since the Reminiscing Old Ang Mo Kio murals were painted on the walls of a neighbouring HDB block, throngs of photographers, “Meituxiuxiu-ers” and random pedestrians have been snapping photos of the murals left and right. 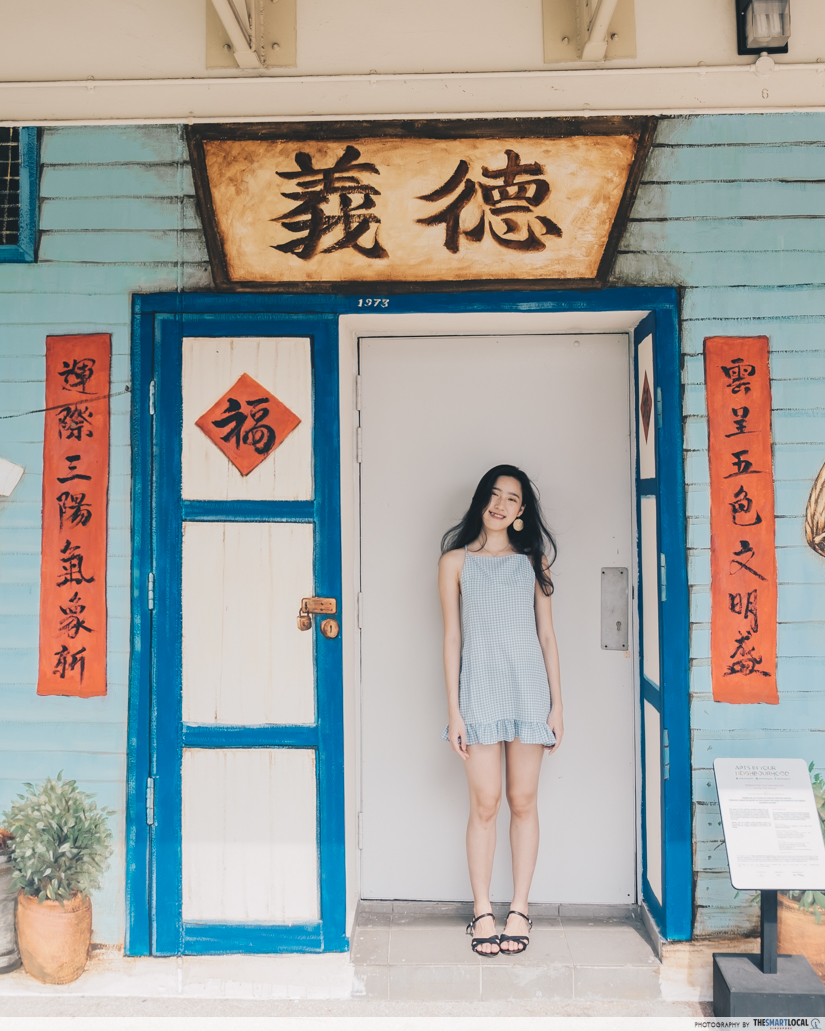 An interactive mural – there’s a small platform where you can step on to mimic the visual illusion that you’re inside.

Painted by artist Yip Yew Chong early this year, the murals pay tribute to the kampong spirit embodied by AMK and its inhabitants. A re-imagination of days past, these paintings illustrate the daily workings of the generations before us. Time travelling tip: wear matchy-matchy clothes with the figures in the painting to fit right in to this fictional kampong.

As you admire these murals, you might just find yourself making interesting parallels between the old and the new like we did – shout out to frying wok and the mortar and pestle which are still being used to recreate some of our favourite local delights today.

You can either nest at home feeling guilty after a day of incessant snacking, or shed those calories with free Piloxing session conducted by the enthu Piloxing trainers at AMK Hub. It’s a sport which combines standing pilates, boxing and dance – so you’ll really be working all your muscles for that healthy and toned physique. 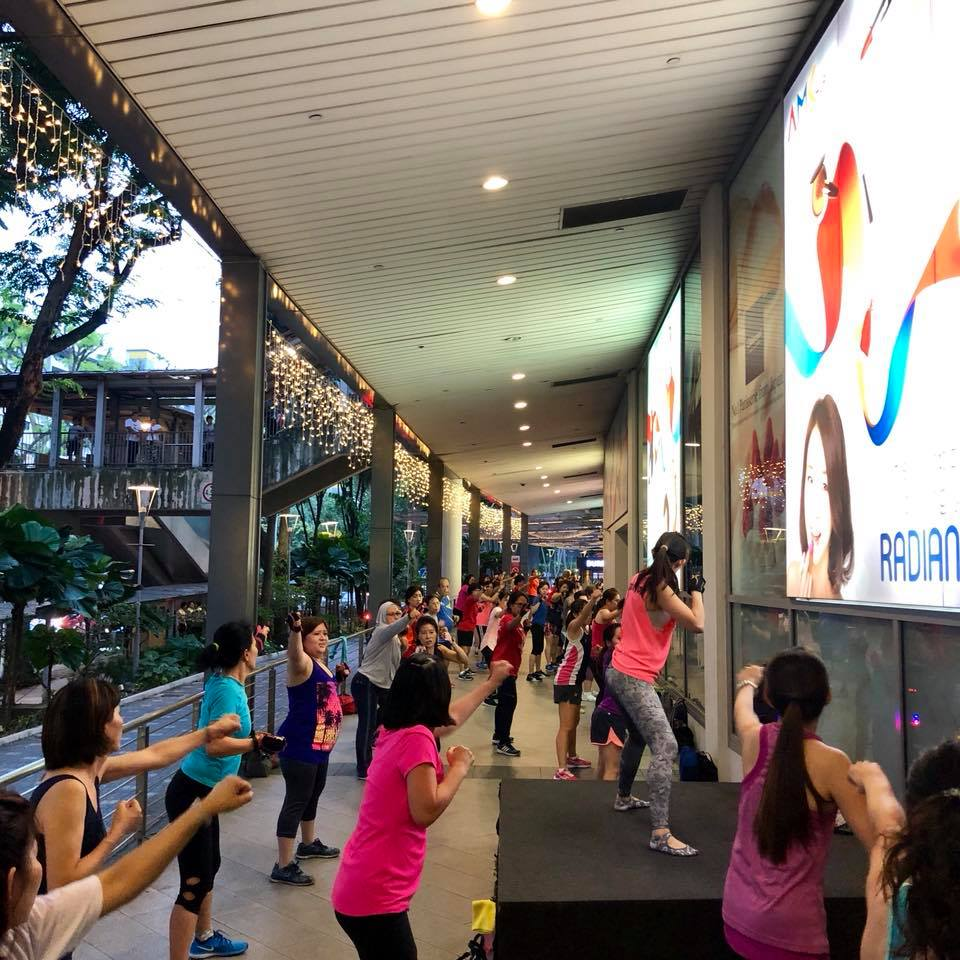 It’s free, it’s healthy – and did we mention it’s free? Simply gear up in athletic wear and join in!

9. Vogue on the rooftop of these IKEA-lookalike HDB blocks 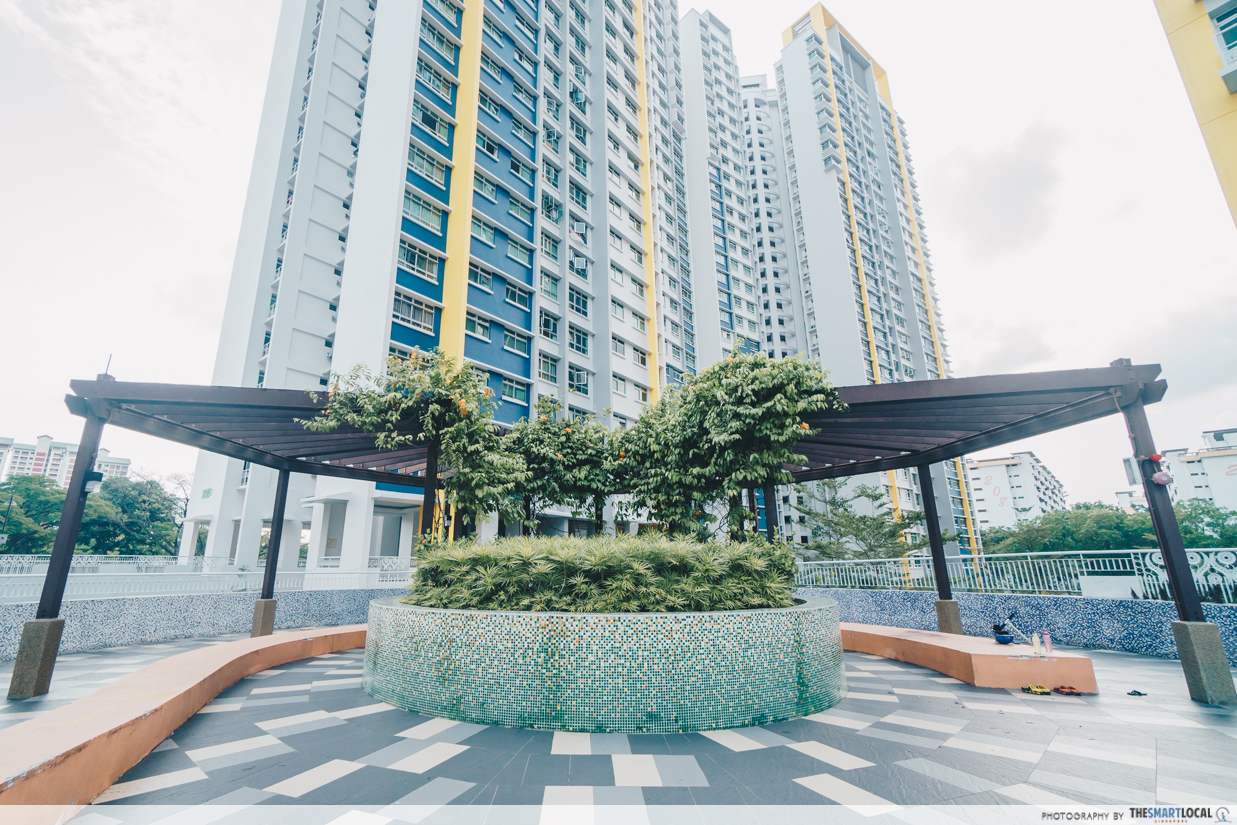 These blocks of flats at AMK have a dark blue and yellow colour scheme and man, do they remind us of IKEA. If you’re still not over the IKEA-inspired streetwear trend, you might want to vogue it up at this cool rooftop garden at Teck Ghee Vista, Block 308C. 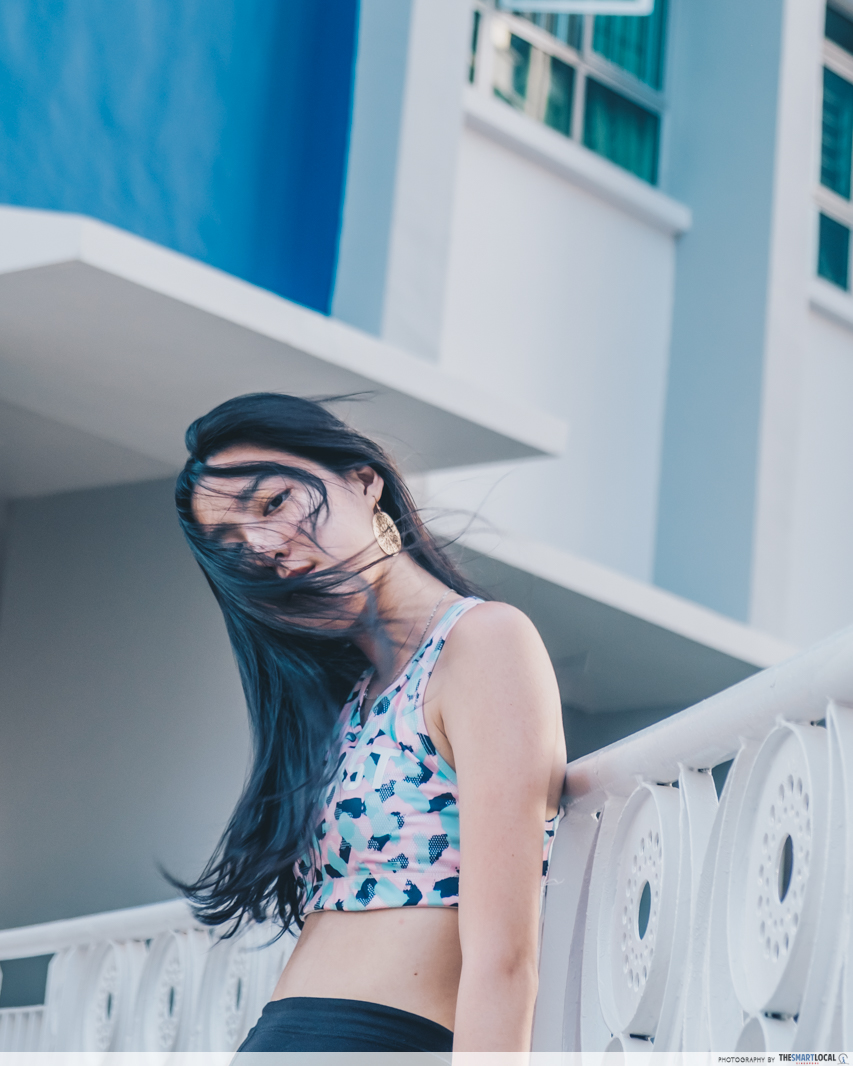 Take on Ang Mo Kio with us on our next #Instawalk! 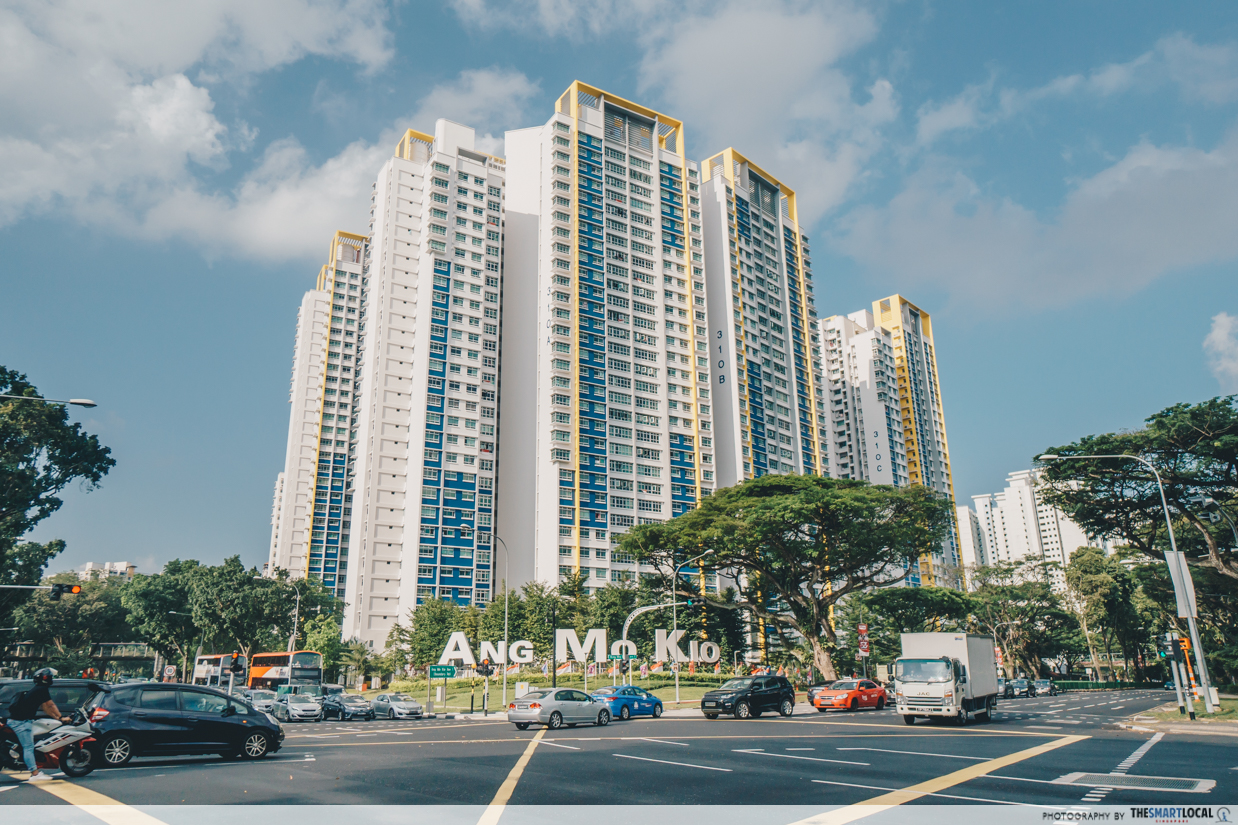 If you’re wondering what else this charming town in Central Singapore has to offer, we’re more than psyched to take you on a little pilgrimage with us around the streets of this historic neighbourhood.

Our next Instawalk will be taking place in Ang Mo Kio on 29 September 2018, sign up for a tour around AMK with us – TSL style.

Follow @thesmartlocalsg and @MNDsingapore for upcoming details about the walk. If you’re interested to see what a typical instawalk is like, feel free to check out the photos we took from our previous instawalks here: #tslwalks #iwalkchinatown. 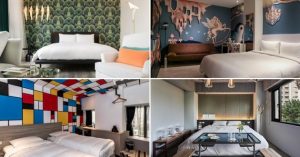