As all chocolate addicts may know, there’s really no such thing as too much chocolate. They’re great for any occasion and loved in all shapes and sizes. Though, bigger is always better as Hershey’s new pop-up in Changi Airport T3 seems to prove.

Everything here has gone mega, from 3M-high chocolate towers filled with Hershey’s Kisses to mega 2KG chocolate bars. We went down to suss out what you can expect at the event, happening from now till 3rd May 2021.

Shh calorie tracker, you don’t have a place here. 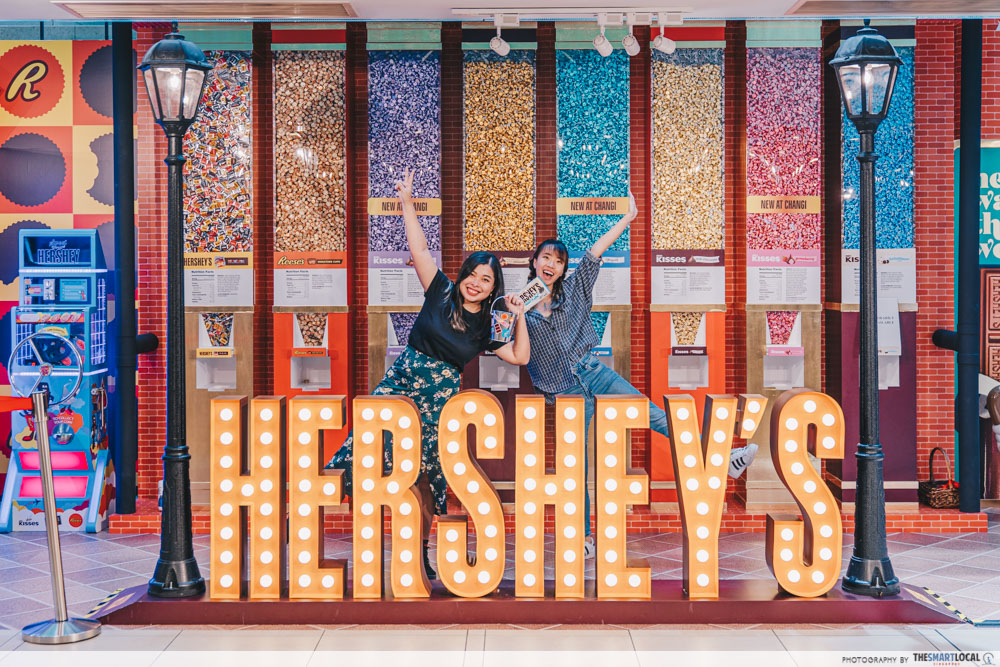 Willy Wonka’s factory may not exist, but we’re glad to hear that this 3M-high chocolate tower sure does.

Inspired by New York’s Hershey’s Chocolate World, Hershey’s Amazing Chocolate Machine brings some serious Times Square vibes into the airport. Spelling glitz and glamour is their LED sign and sparkles from the colourful aluminium chocolate wrappers within each tower. 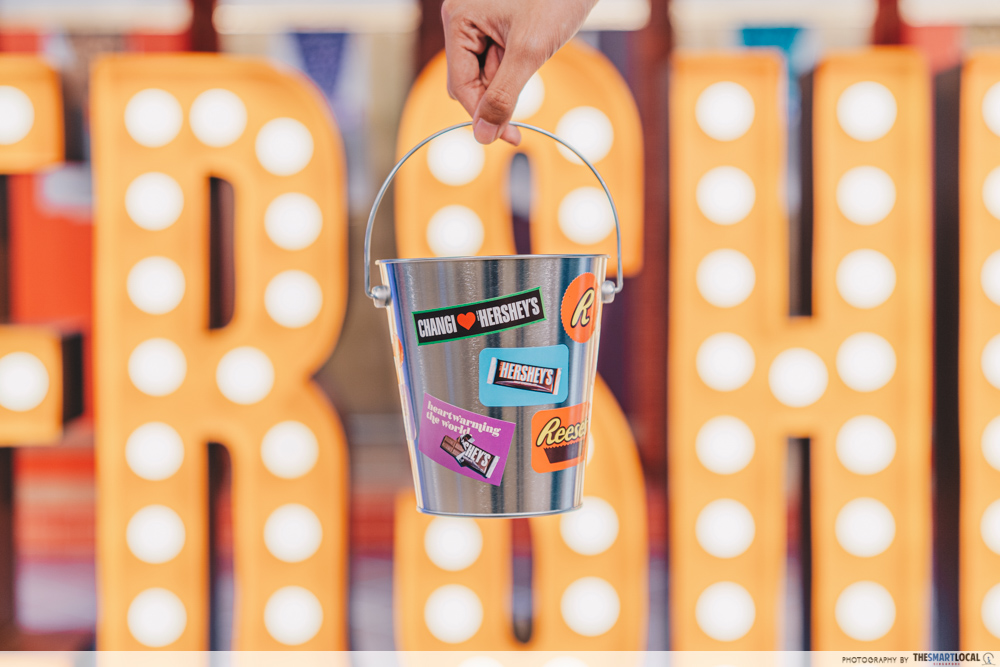 Expect chocolate galore with eight types of chocolates available here, from the popular Cookies ‘N’ Cream Hershey’s Kisses to the rich Reese’s Pieces. At just $9.90, get the Hershey’s Bucket of Happiness which comes with a set of cute decorative stickers and a metal bucket to fill up with chocolates.

If you’re looking for something new, we’ll recommend saving some space in that bucket for their three new flavours of Yoghurt, Strawberry and Hazelnut. Among the lot, Hazelnut takes the cake for us with its sweet and distinctly nutty flavour. 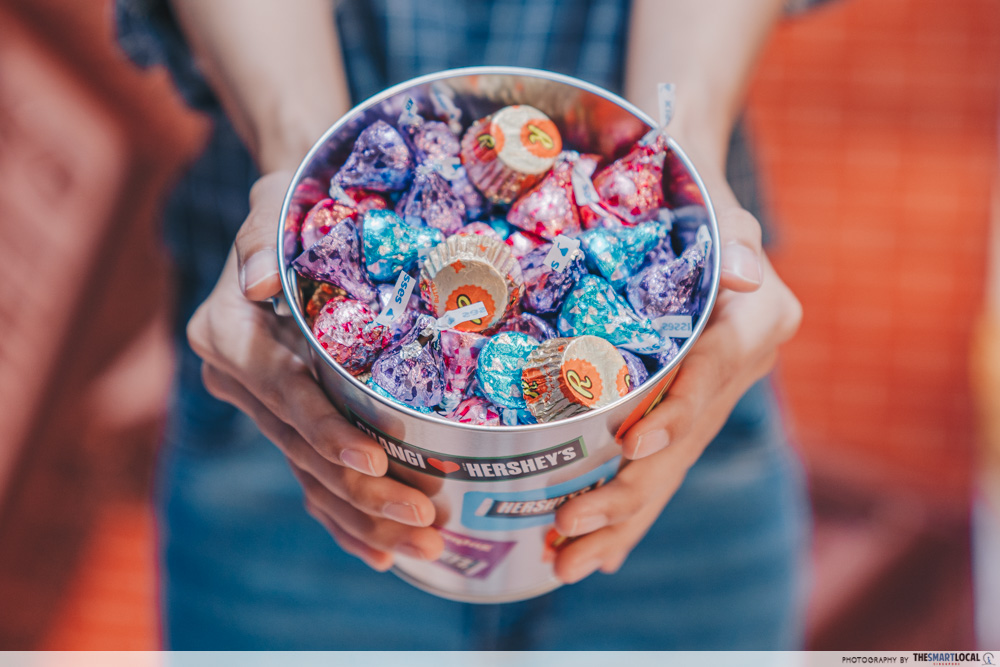 Pro-tip: With the booth’s popularity, some of the flavours here have run out of stock at the time of writing. We hear they’ll be restocking on 27th March 2021*, Saturday, so head down then for the full range of flavours. 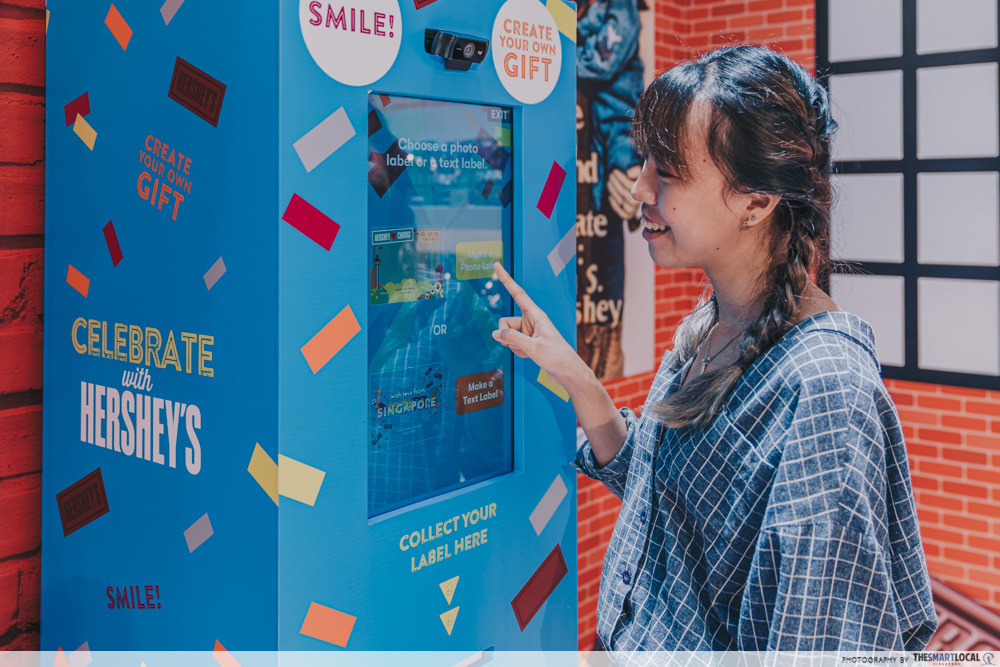 90s kids who miss their neoprints, have a #throwback to the good old days with the Hershey’s Sweet Personalisation booth ($6.90). Snap a picture here and decorate it with their colourful stickers and funky borders. 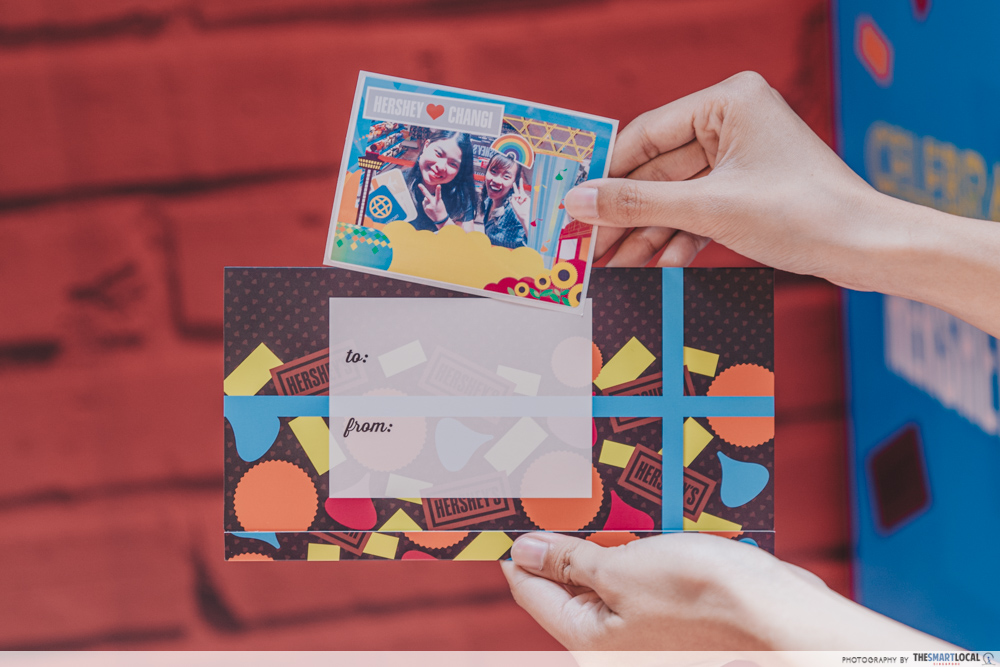 Your picture will be printed out instantly and you can paste it on your chocolate bar to make it one-of-a-kind – great as a customised gift to a loved one.

Spend a minimum of $60 to get access & redeem freebies 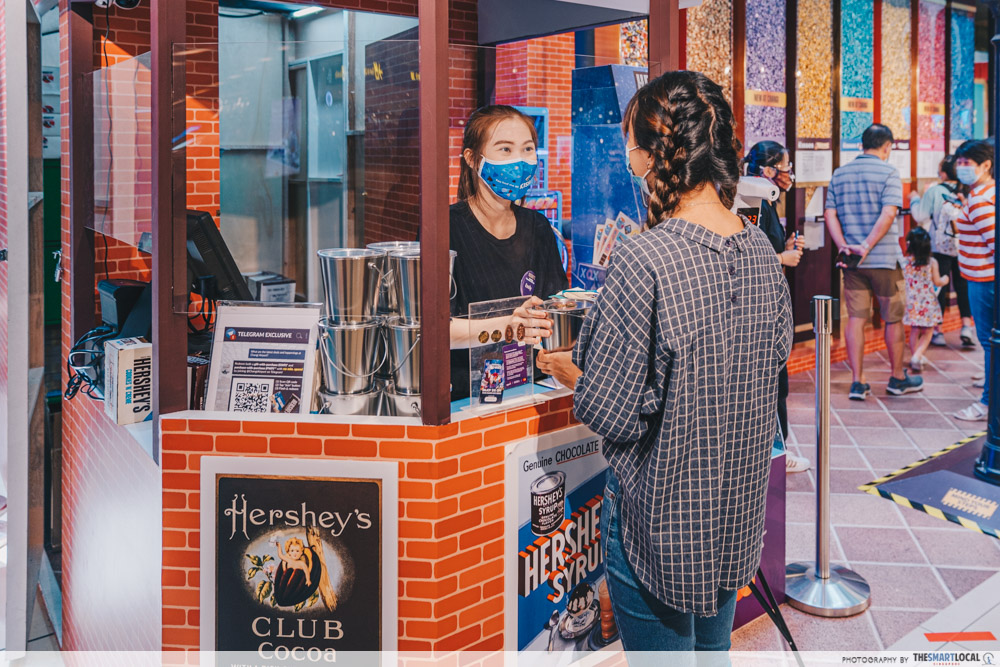 To access both the Hershey’s Amazing Chocolate Machine and Sweet Personalisation booth, spend a minimum of $60 at participating outlets – or $80 at Fairprice Finest – at Terminal 1 and 3, in a single same-day* receipt. 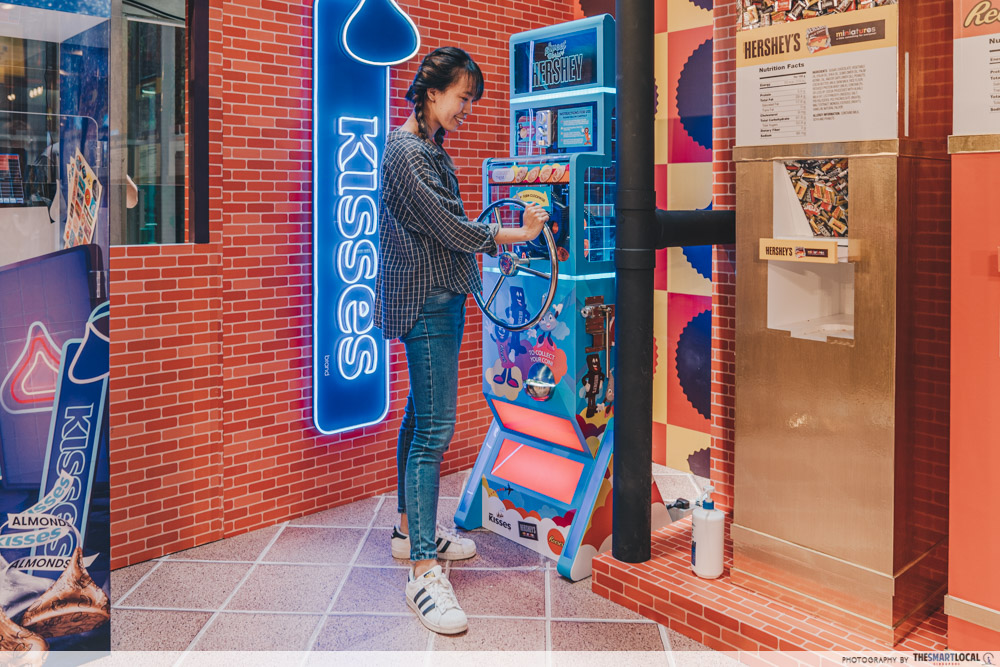 With each receipt submitted, you’ll also redeem freebies, including a $15 Changi Eats Coupon Code and a go at the Hershey’s Penny Press Souvenir machine. 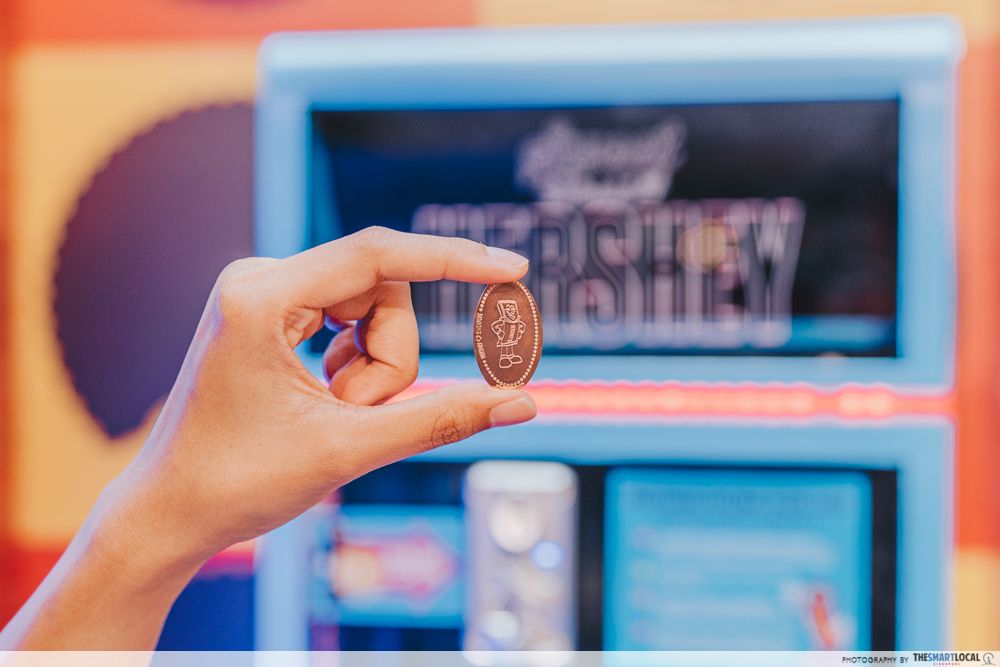 * Exception for receipts dated between 21st – 27th March 2021. These can be redeemed after 27th March instead.

No worries if you can’t hit the minimum spend as there are other sections of the pop-up you still can access. 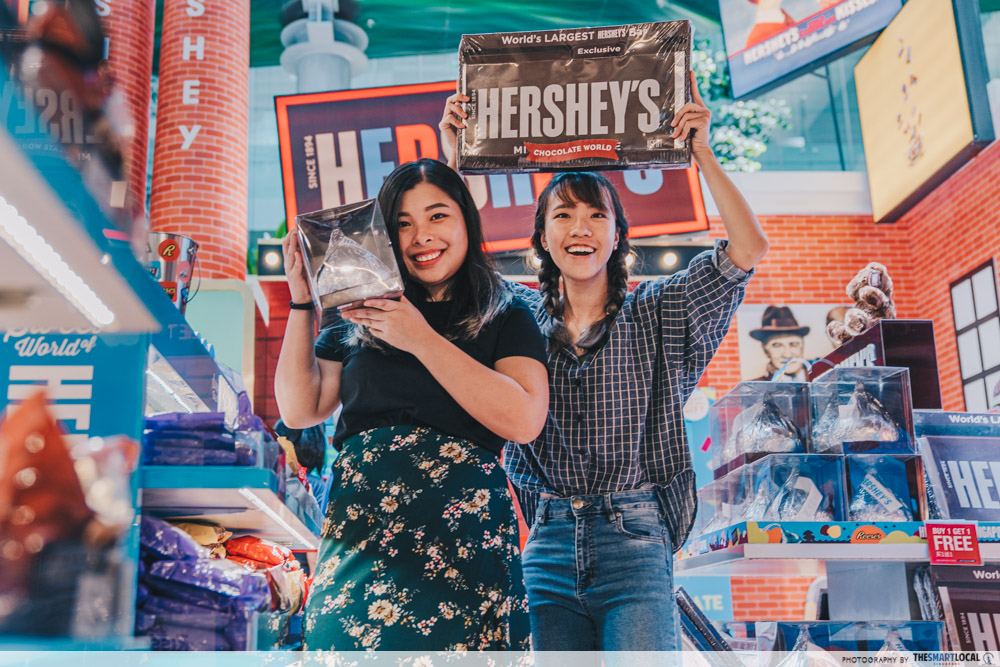 Their retail store is one of them, where chocolate addicts can get their hands on a mega 2KG bar of Hershey’s chocolate – a Changi-exclusive. If a regular 40-gram bar of Hershey’s doesn’t do it for you, surely this would. This chonky mass is going at a 1-for-1 deal (U.P. $99.90), while stocks last!

Going along with the mega-theme is their giant Hershey’s Kisses (U.P. $44.90), also a Changi-exclusive and going 1-for-1 until further notice. 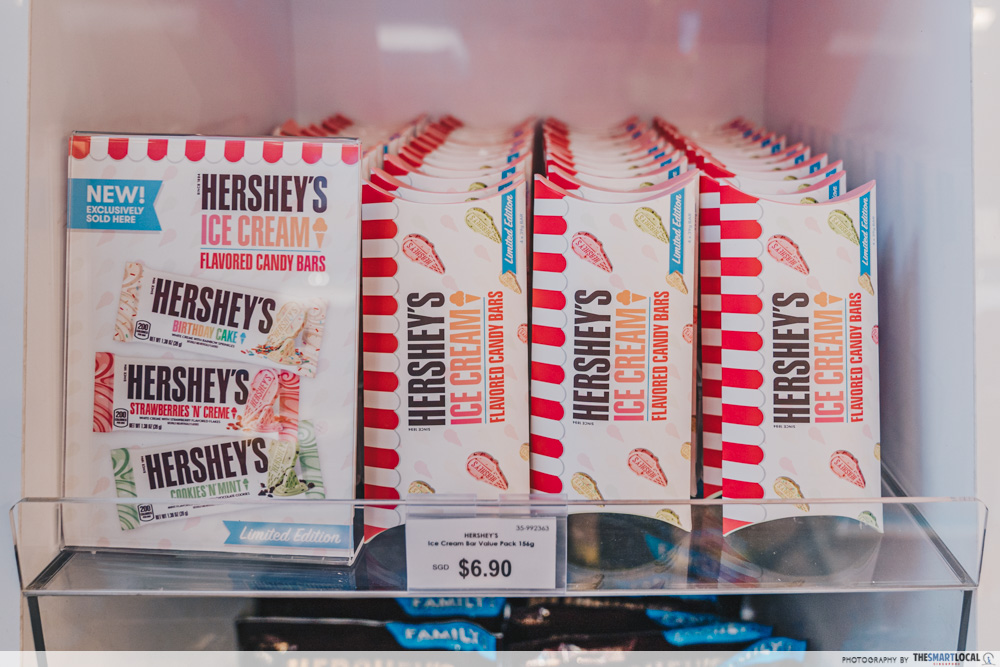 Now, for those with a normal appetite for sugary treats, regular-sized candies are also available. Other than the usual fare, fans of the brand can also find exclusive Hershey’s Ice Cream Flavoured Candy Bars ($6.90) in Birthday Cake, Strawberry ’N’ Creme and Cookies ‘N’ Mint.

Other treats you can expect here include Hershey’s Nuggets, Bark Thins, Brookside Chocolate and Ice Breakers.

While wandering the rest of Terminal 3 you may also spot larger-than-life pop-up installations dotted around the public area. 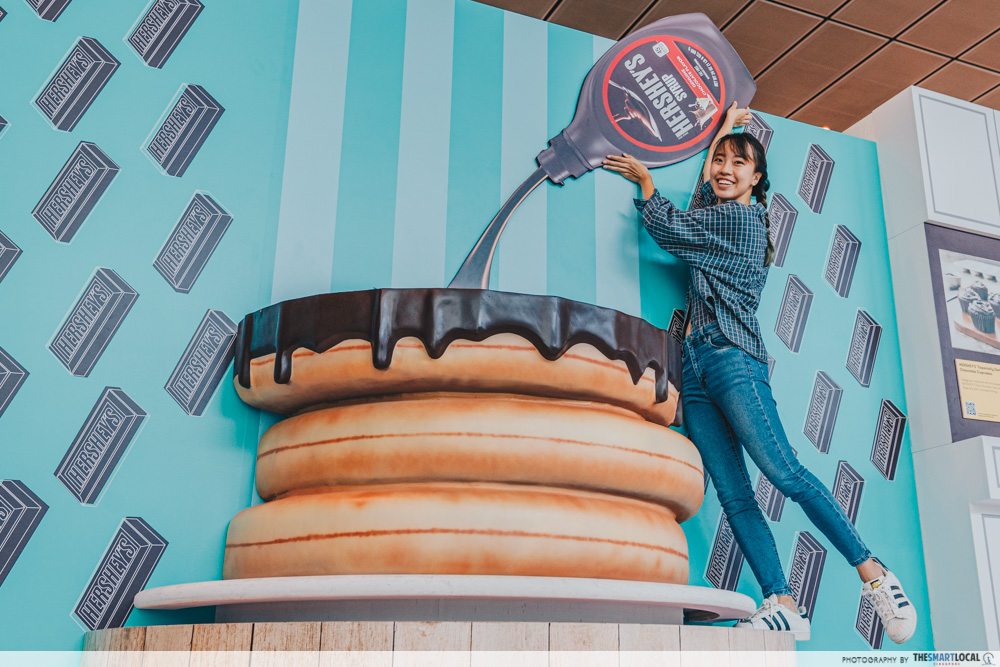 Don’t miss the Tiffany Blue-coloured Hershey’s Kitchen, fitted with giant pancakes and a mug of hot chocolate that’ll make one feel like a shrunken Alice in Wonderland. 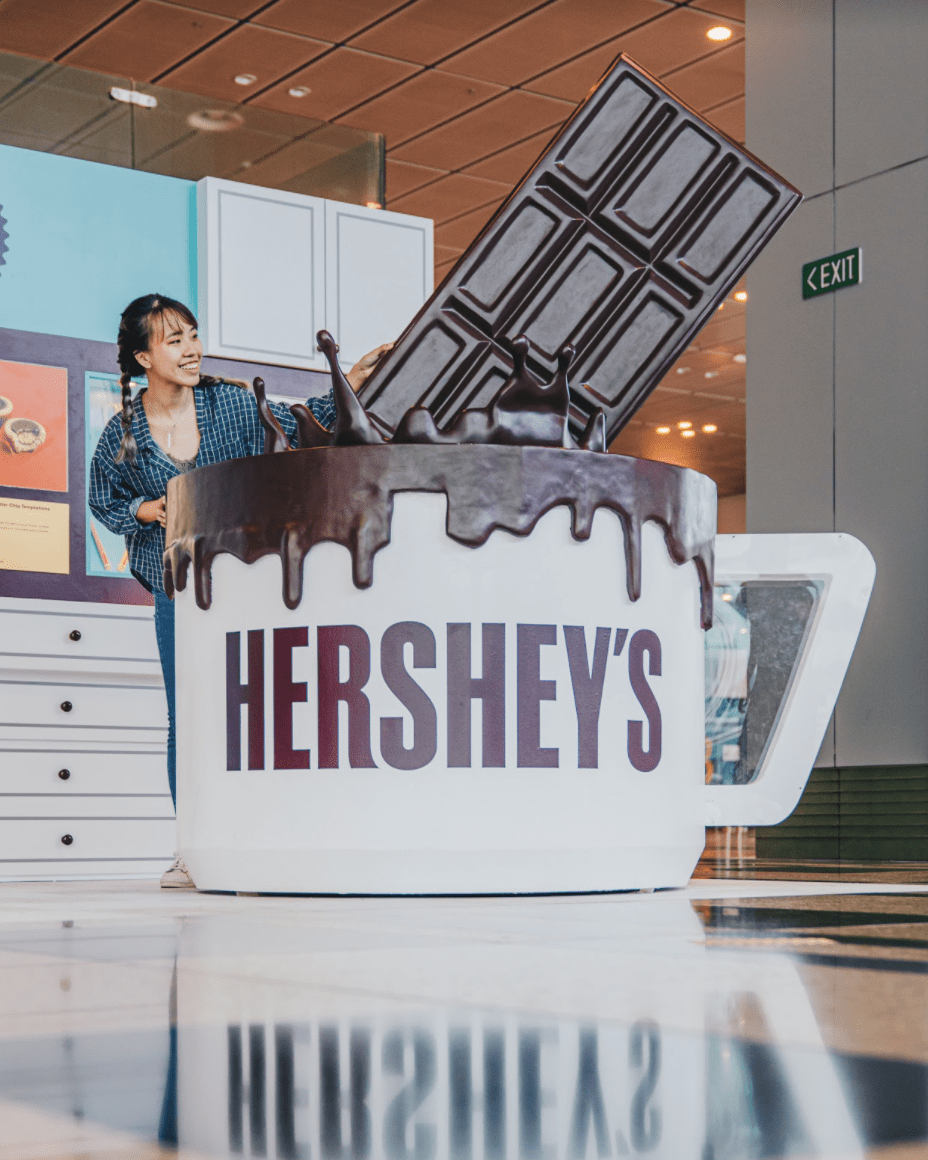 Bakers, you’ll also find four special Hershey recipes here to embark on your next baking project with. You’ll want to visit this station to record the recipe first, before going to the Hershey’s retail store to get the chocolate ingredients you need. 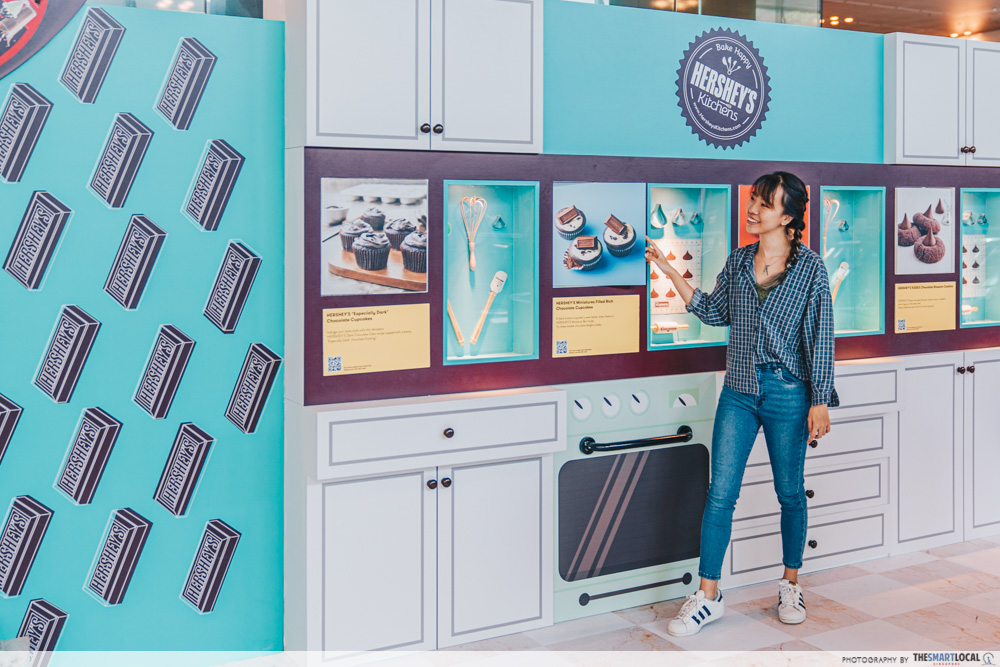 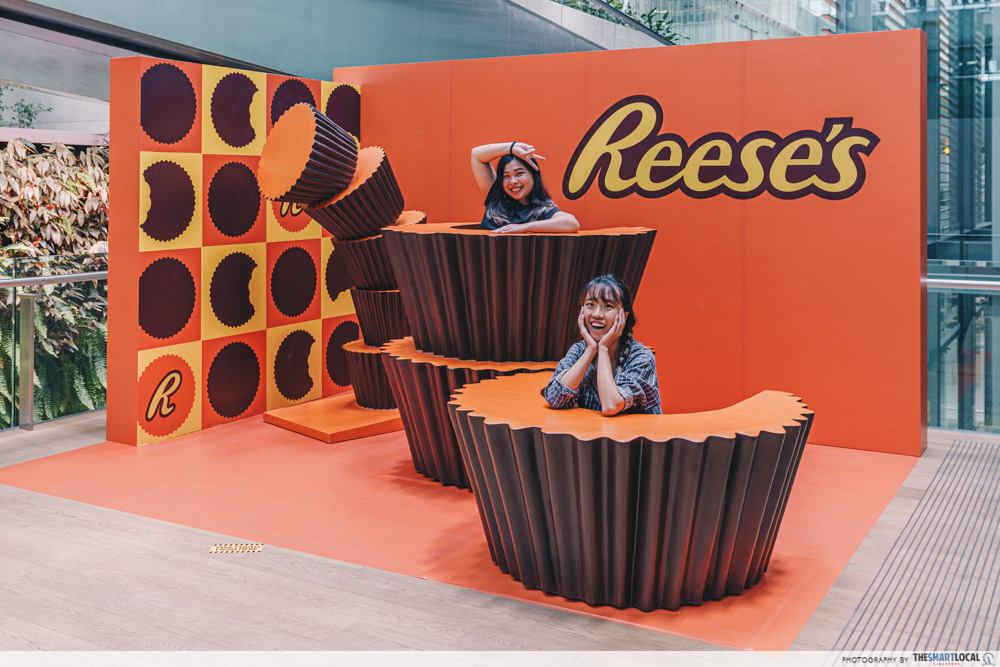 Fun fact: Reese’s was originally part of a separate brand but merged with Hershey’s way back in 1963 and soon became the merged company’s top seller. Folks who love the peanut butter cup, snap a picture with their gigantic forms at basement 1, near the lift.

Life may be like a box of chocolates – you never know what you’re going to get. But hey, at least you’ll know you’re in for a chocolate-filled good time when you head down to Hershey’s Pop-Up. To skirt the crowds, visit during weekdays or pop by once they open at 11AM, daily. 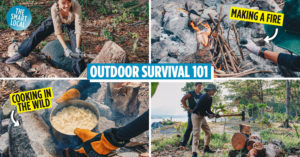 We Took A Bushcraft Survival Course In Pulau Ubin To See If We Could Live Like Bear Grylls For A...
7 Hiking Trails You Can Explore Around The Revamped Bukit Timah Nature Reserve 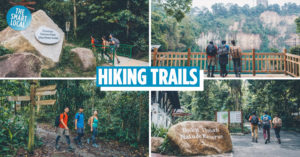