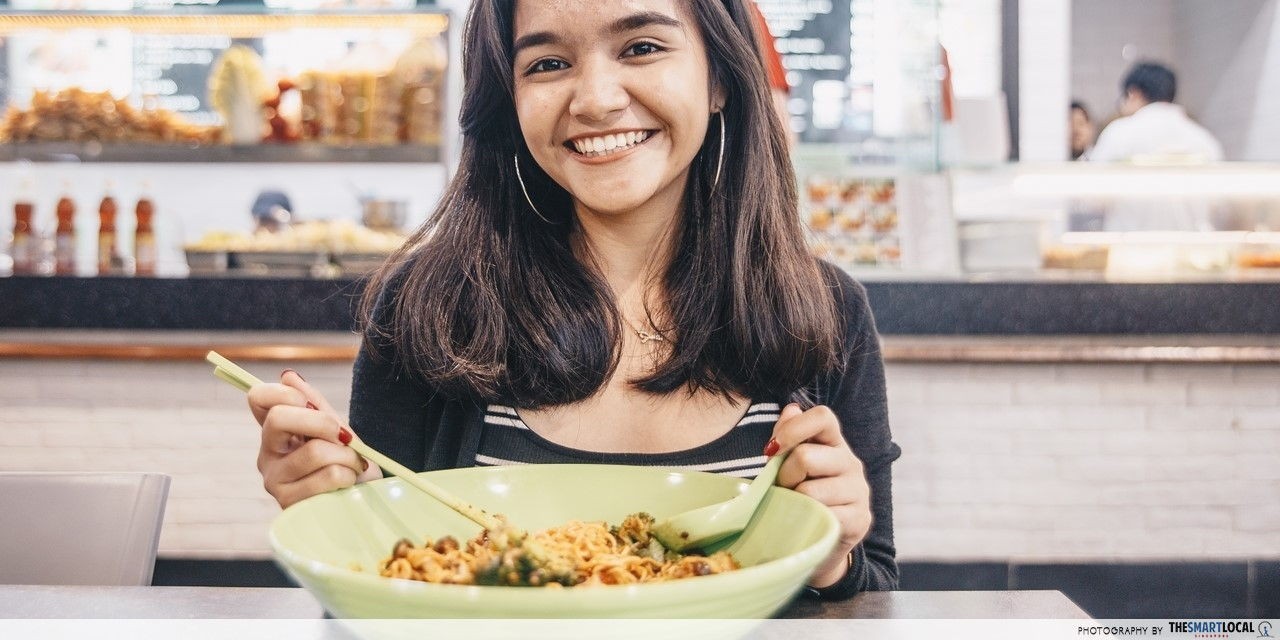 Mala hot pot has been all the rage for awhile now. For the uninitiated, Mala hot pot follows the yong tau foo concept where you get to pick your own choice of ingredients –  except that instead of clear soup, your taste buds will be met with spicy and numbing Szechuan sauce.

If you’re a Muslim Singaporean who’s perpetually craving for Chinese cuisine like me, you’d understand the struggle of finding Halal Chinese hawker dishes here. Well, fellow Muslims no longer have to suffer from FOMO when it comes to mala…because we just discovered a Mala Hot Pot stall at Paya Lebar Square’s Halal food court, Cantine, located at the basement of the mall! 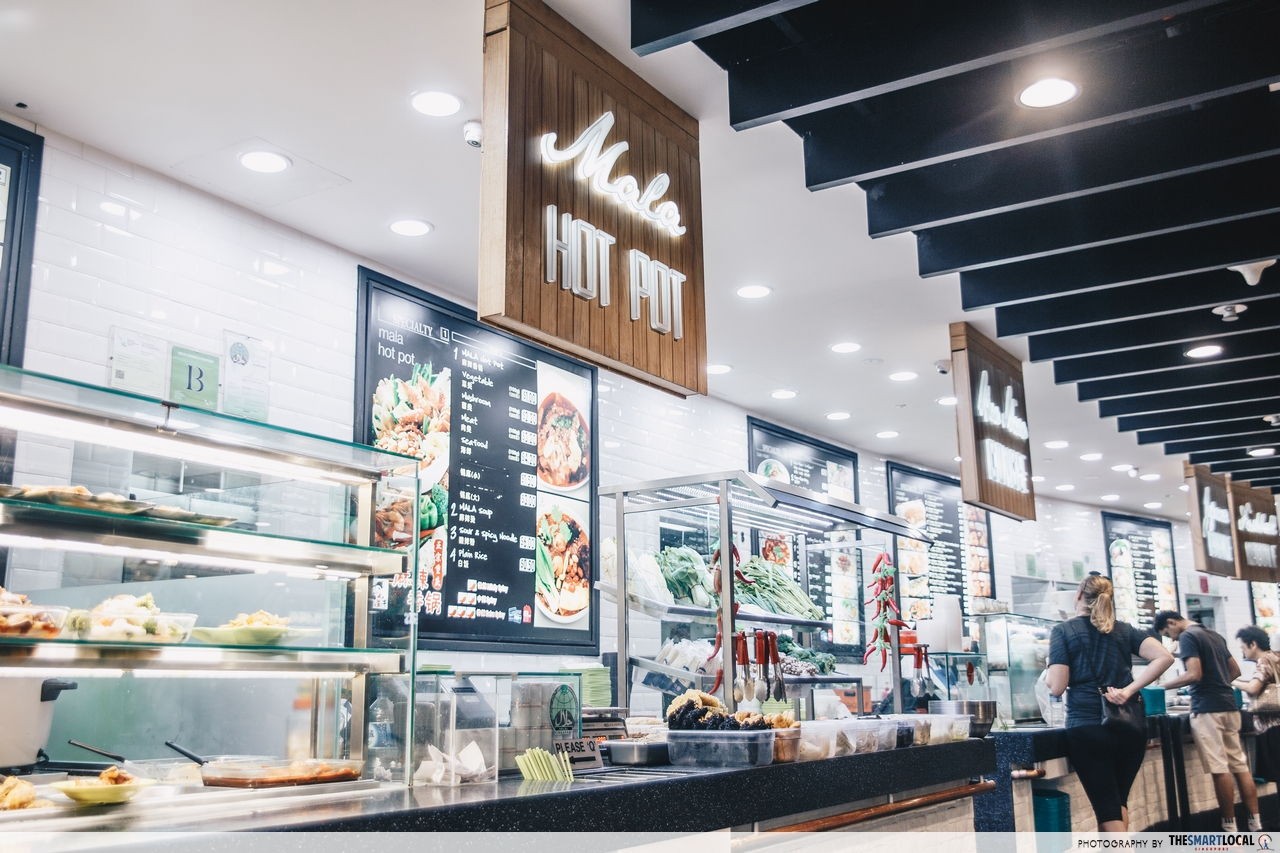 As with any other mala hotpot places, you’ll get to choose from a wide selection of fresh ingredients most commonly used in steamboats – from leafy greens, to meats, mushrooms and seafood. After choosing ingredients, you can opt to have them with rice ($0.50) or noodles ($1). Once that’s done, all that’s left to do is inform the makcik on your preferred spiciness level – mildly spicy, spicy, and extra spicy – and you’re good to go! 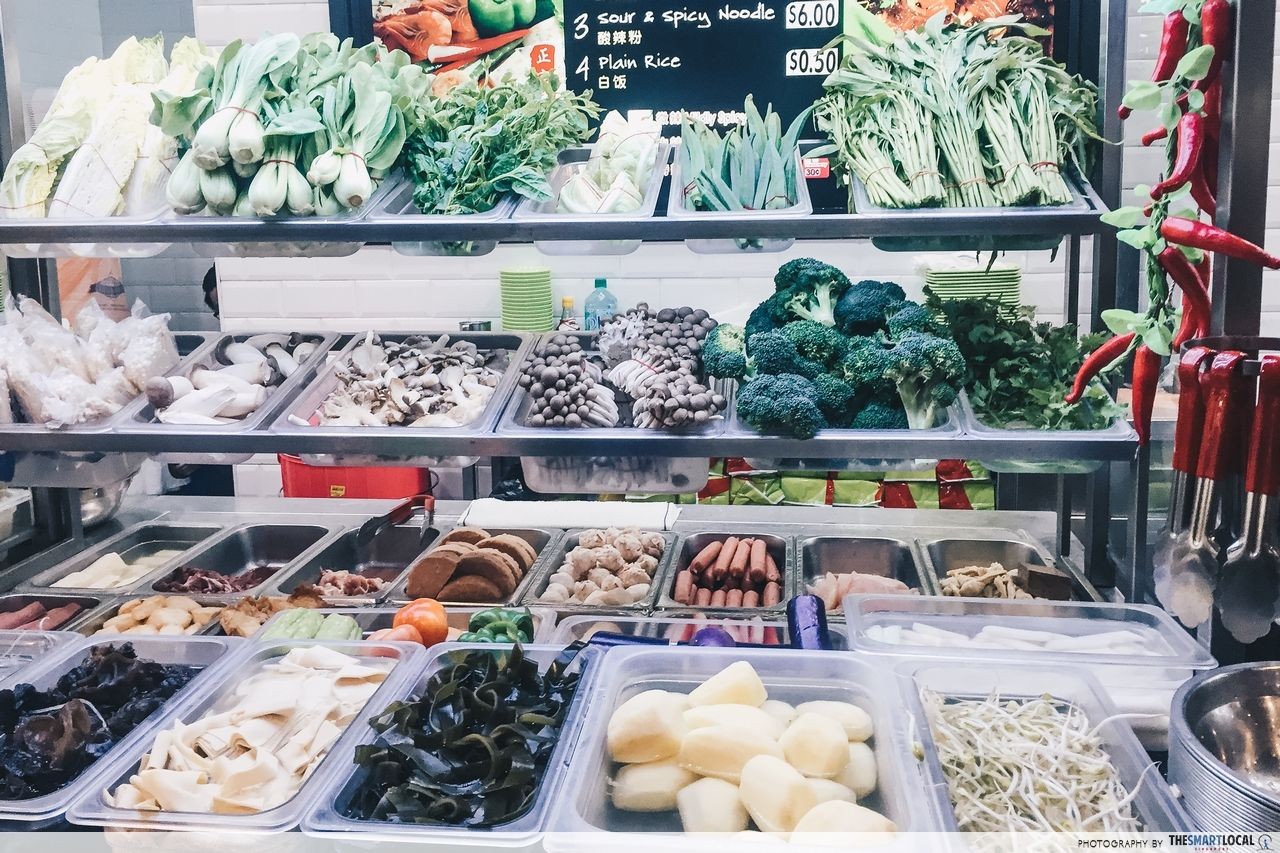 Prices for the ingredients are charged based on weight instead of per item. With vegetables costing $1 per 100g, meats at $3.20 and seafood at $4.20, prices here are comparatively more expensive than at other mala stalls. Plus, Halal food at food courts are usually more pricey anyway since Halal mala itself is a rarity! 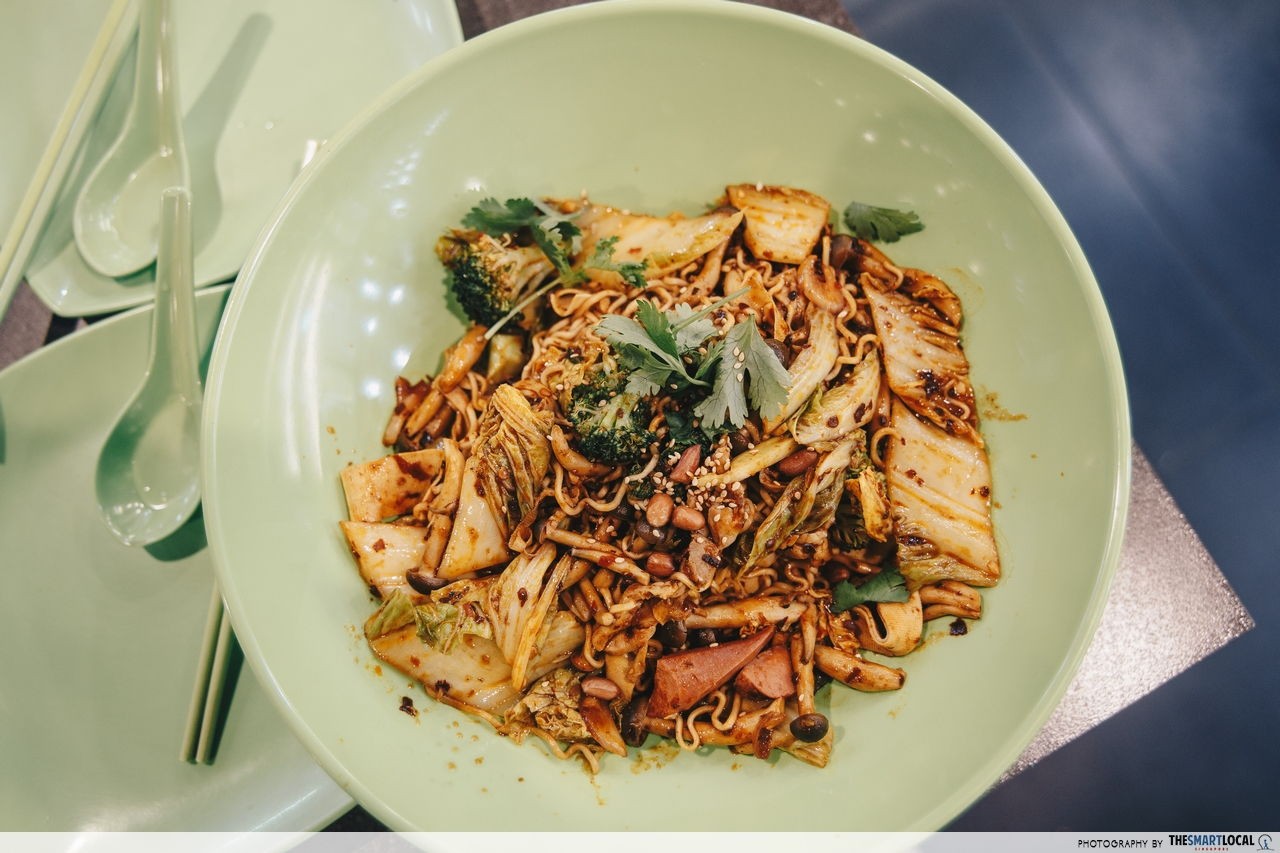 My spice tolerance is pretty low so having the ingredients stir fried in their “Mildly Spicy” sauce was enough to numb my senses for awhile. But if you have a predilection for spicy food or wish to challenge your tastebuds, go ahead and opt for “Extra Spicy” for that added kick! 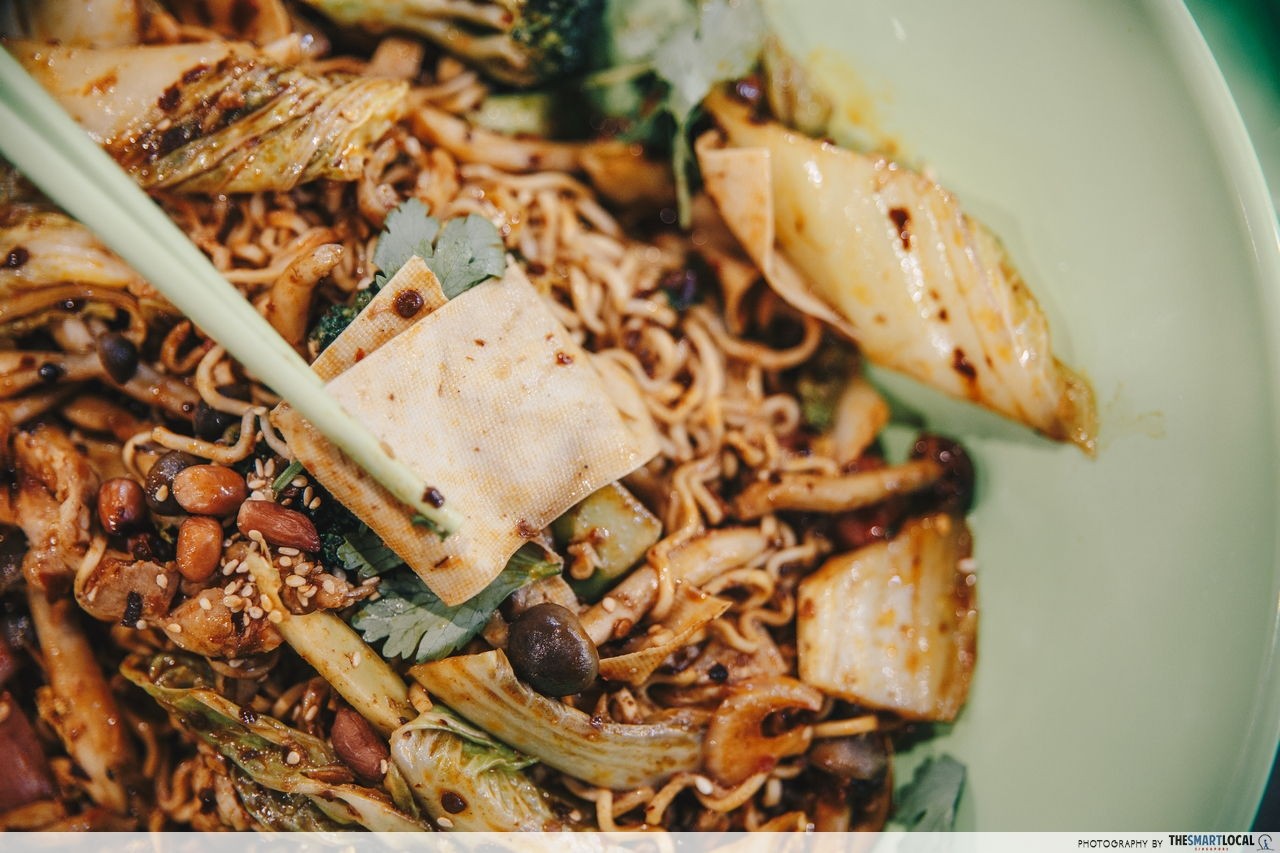 Our stir-fried mala bowl consisted of the following ingredients: chicken, sausages, broccoli, cabbage, beancurd skin, mushrooms, and tau kwa – which rounded our bill up to a grand total of $14.30. At first, I thought it was quite overpriced until I saw the portions – the huge bowl was good for 2. 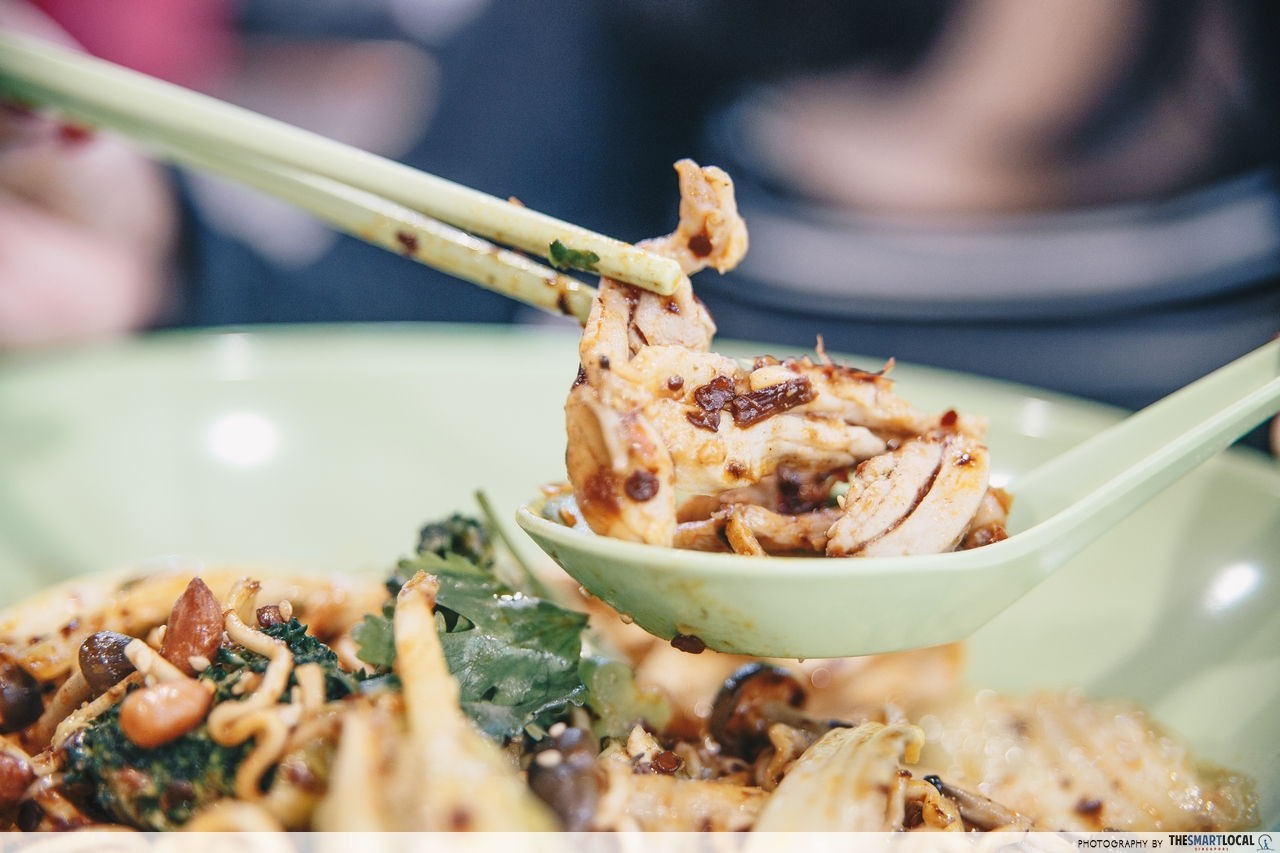 Seasoned with nuts, sesame seeds, and spices, the heat from the fiery mala paste didn’t kick in until after a few mouthfuls. The concoction of spices in the mala sauce was rich and brought a savoury note to the otherwise chilli-laden dish. The best part? They were generous with the sauce – so much so that the dish got spicier as we gradually got to the bottom of the bowl. 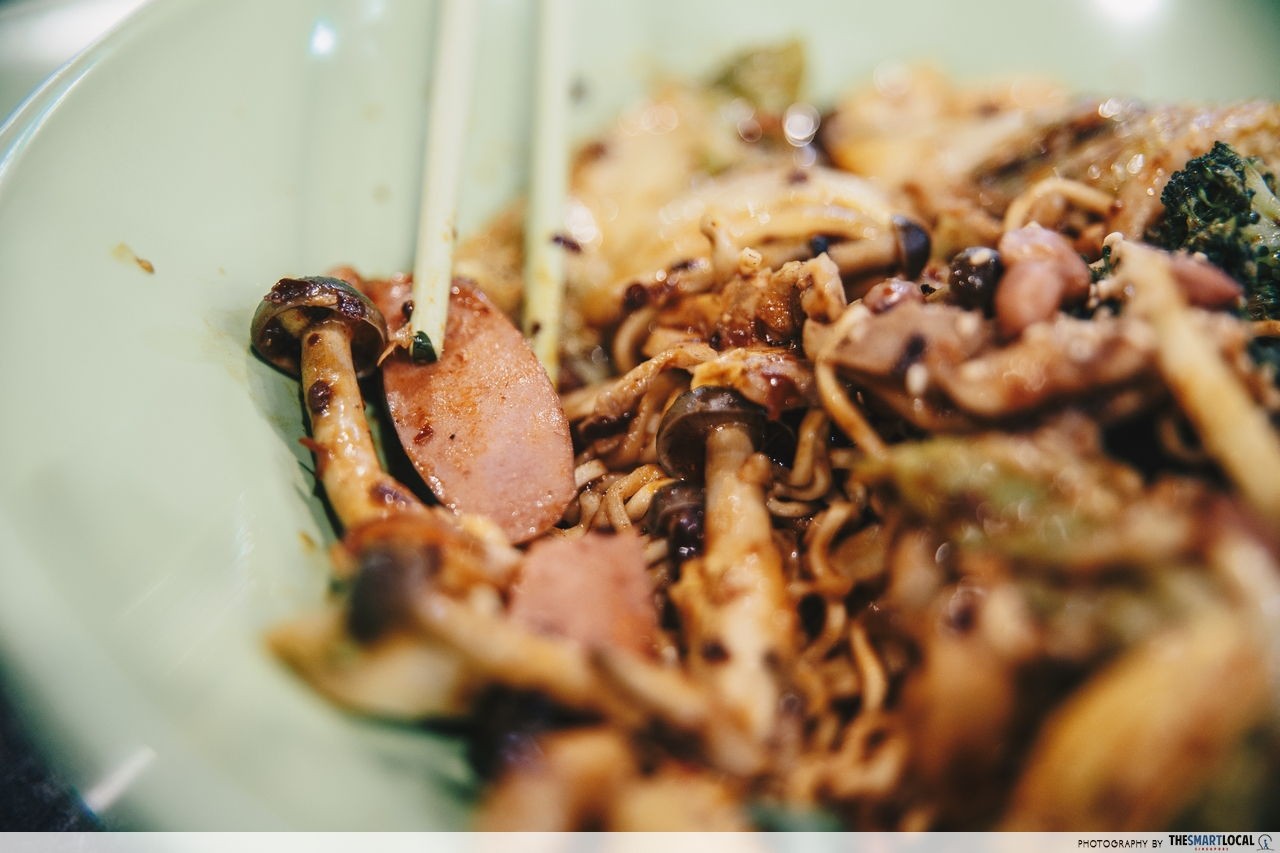 This popular Chinese delicacy can be enjoyed with both rice and noodles. When you pick noodles, you can choose to have them stir-fried or in a soup base. For those who enjoy the painful pleasure of spicy food, we suggest going with the soup version.

Set your tongue on fire with Halal mala 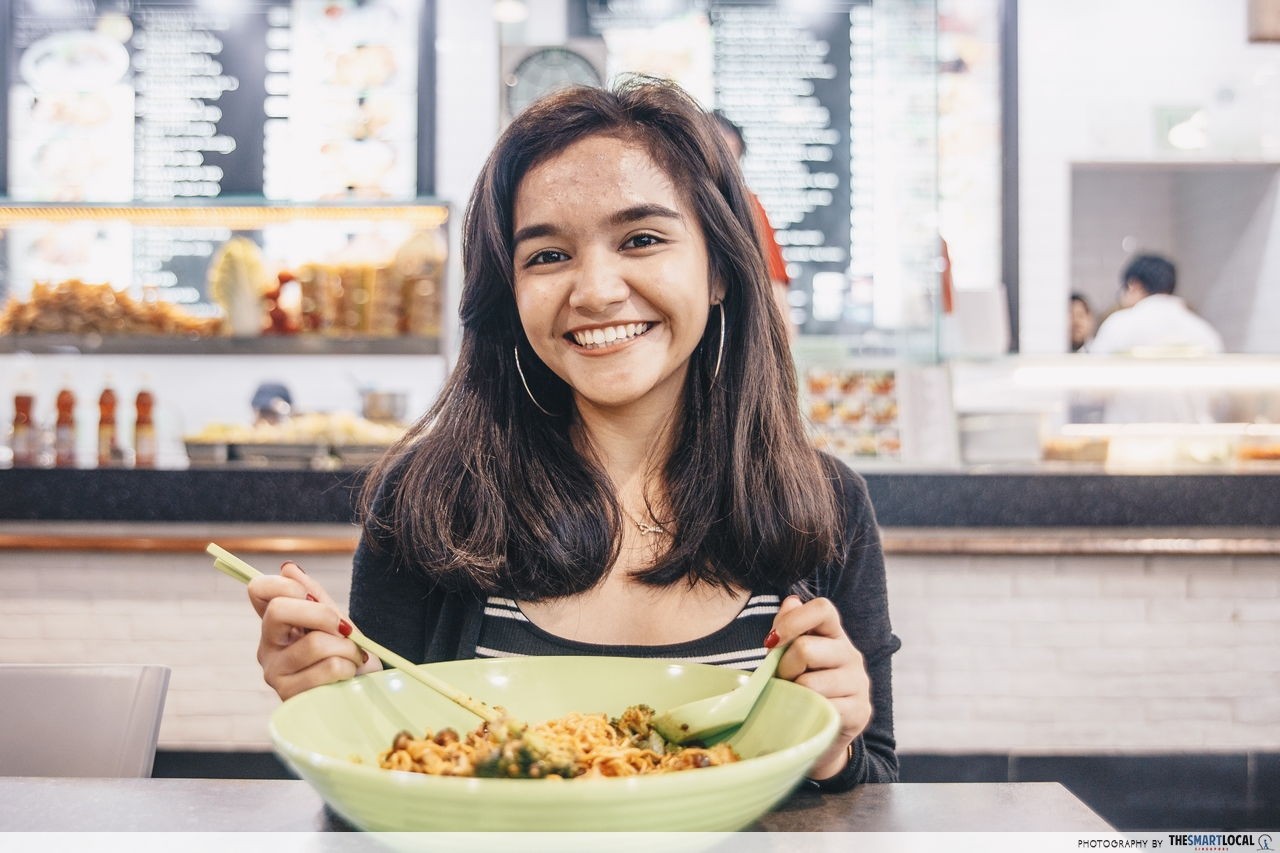 Compared with other mala joints, prices here are on the high side, but for their authentic Szechuan sauce and wide selection of ingredients, it’s well worth the money. But do bear in mind that ingredients are charged based on weight instead of serving portions – so, be careful not to over-order!

When I first heard that there was a Halal alternative for the ever so popular mala hot pot, I knew I had to try it for myself to see what all the raving was about. True enough, slurping up the huge bowl of piquant mala noodles has been the most tongue-numbing food experience I’ve had thus far.  Sure, finding halal authentic Chinese cuisine in Singapore is tough, but it’s not impossible!

My Journey Inside The Inner Circle - The New Exclusive Dating App to Hit Singapore
New And Fun Things To Do In January 2018: Laneway Festival, Pokemon Run, And FREE...