There’s a reason why you always want fast food 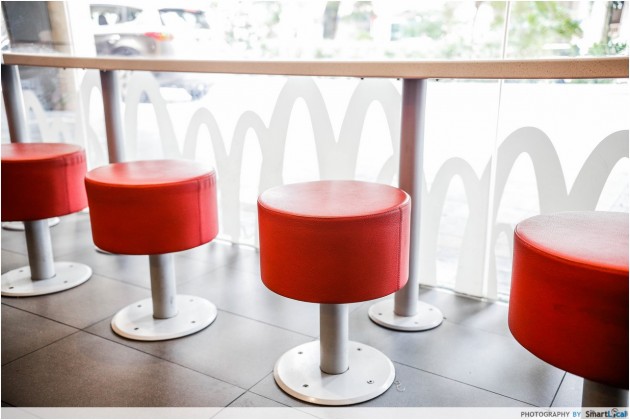 Fast food restaurants have become a part of many Singaporeans’ everyday lives. They are in MRT stations, shopping malls, and even polytechnics and universities. Stepping into one of these restaurants, though, is like walking into a war zone – you’re being bombarded on all sides with smells, bright colors, made-up burgers, and offers to upsize. 10-30 minutes later, you leave wondering just where your money went. 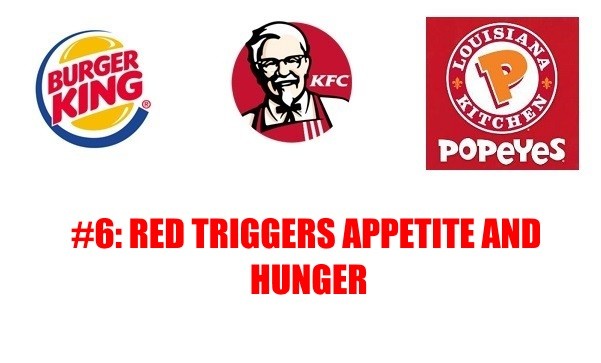 Here’s how the fast food chains mess with your head – and how you can stop them from getting there.

1. They’re always on your mind 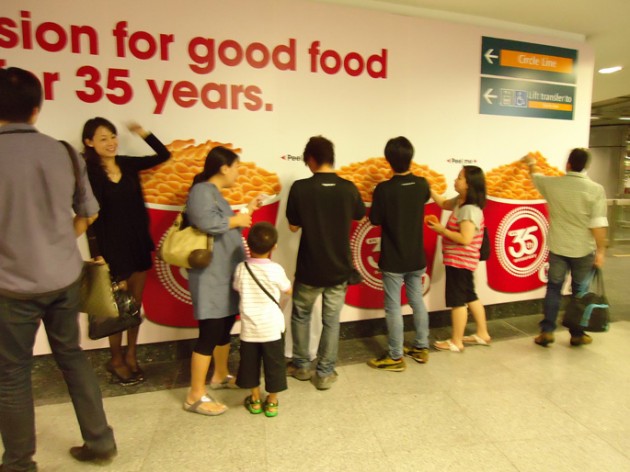 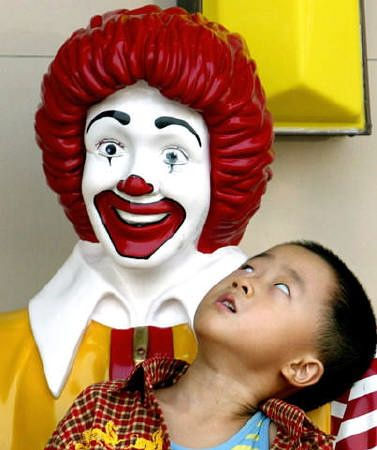 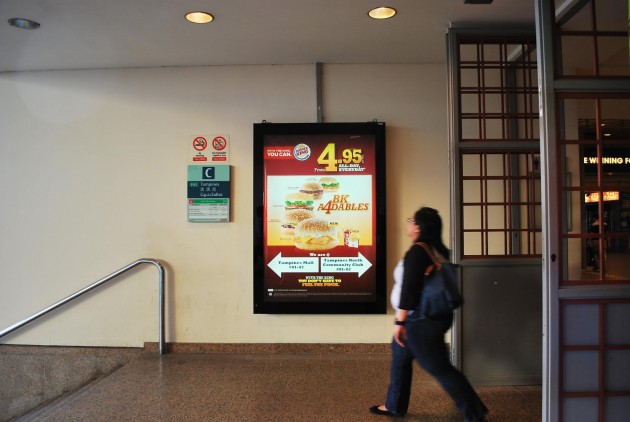 TV ads, print ads, billboard posters splashed outside shopping malls and bus stops – advertising is something they aren’t afraid to spend on. If you’ve seen your fair share of shopping malls in Singapore, you’ll know how the fast food is usually near the mall entrance. Studies showed that one of the strongest influences on consumption is ease of access. In other words, if you can get it easily, you’ll eat it. 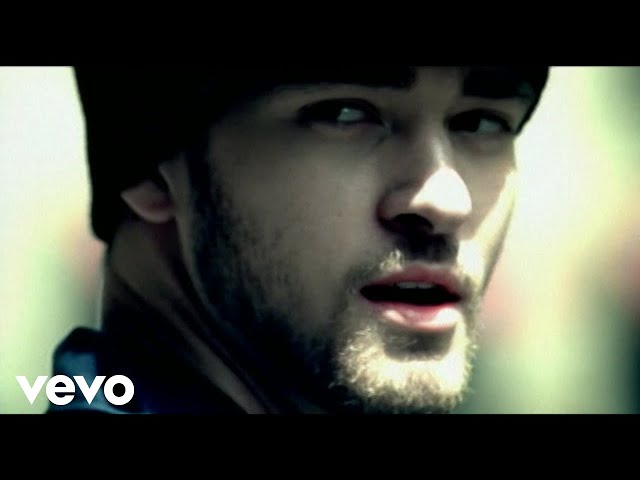 They don’t skimp on merchandise either. Small figurines and toys are all fair game, but also look carefully into your kitchen and see if you happen to have a glass mug with a fast food logo or soft drink on it. I know I have one.

2. The smells of a lifetime 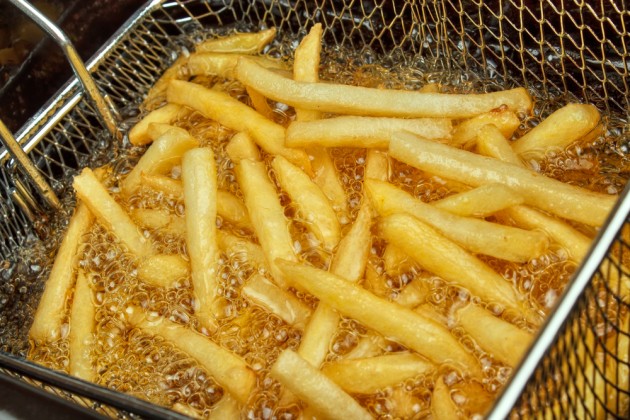 Here’s another reason why the fast food restaurants are usually near the mall entrances or on major pedestrian corridors – the smells waft out of the restaurant like invisible hooks, trying to bait hungry stomachs and their wallets in. If the restaurants are on the first floor, the aromas float up to the upper floors, enticing hungry customers to come down and eat inside.

We’ve got more hard truths: Some of these smells aren’t actually from the food. They’re artificially produced. Scent marketing – the art of hooking customers based on smells – is a relatively new thing, but we’ve already seen it being used in several places. Fast food restaurants aren’t the only companies to use scent marketing – hotels, cookie stores, theme parks, and fitness centres all do it. Yes, in Singapore. Give it a Google – you’d be surprised at the clients who use scent marketing. 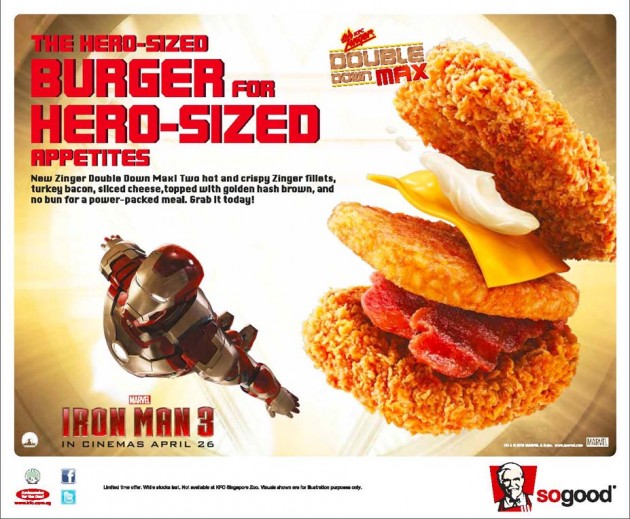 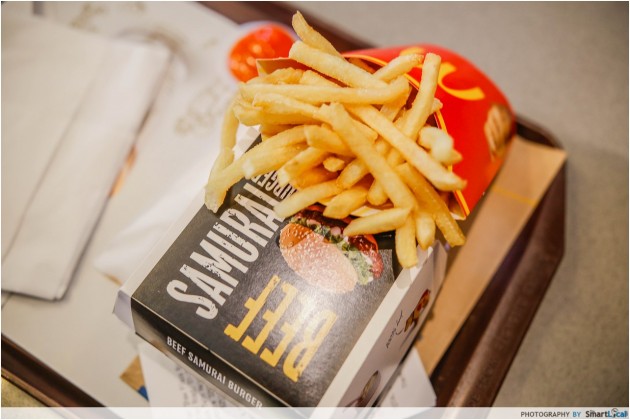 Teriyaki burgers, specially-arranged burgers with chicken patties, Chinese New Year burgers, extra spicy chicken, flavoured shaker fries, twister fries. They certainly have the production line to make these foods at any time, so why limit it to a particular time? Is it so customers will adopt the “This won’t be here forever, so I need to take this once-in-a-lifetime-opportunity to try it” mentality? It’s a distinct possibility.

Also, seasonal products are generally a lot more expensive than the regular menu. Next time you’re at a fast food restaurant, take a good look at the prices of the seasonal items and the regular items. 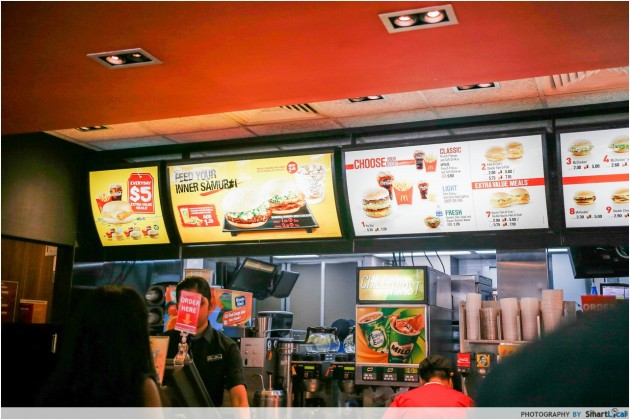 Upselling is a marketing strategy that promotes add-ons or upgrades. Sounds like a good deal, right? Just a small amount more for larger fries, a special shaker flavour, and a larger drink. Or maybe just a few dollars more for a double version of the usual burger. What if you want the specially flavoured shaker fries but don’t want large fries or a large drink?

Here’s the thing – you’re always asked if you want to upsize, whether you want it or not. Always. These upgrades and combos just mean more calories, fat, salt, and sugar, and you sometimes find yourself not finishing the extra food, even though you thought it was a good deal at the time.

Resist them – if you are going to get fast food, be clear about what you’re going to buy before heading in, and don’t be persuaded by their assertions that “it’s only 50 cents more”. 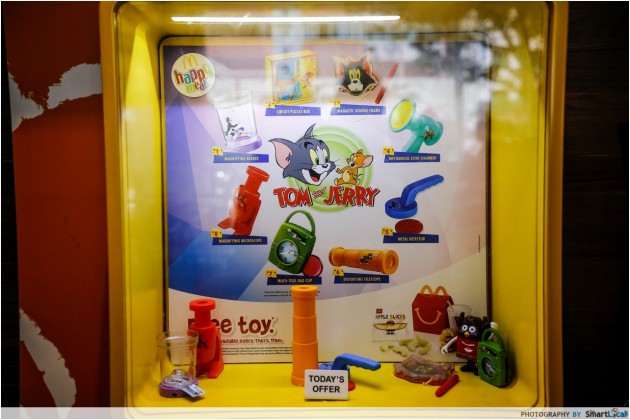 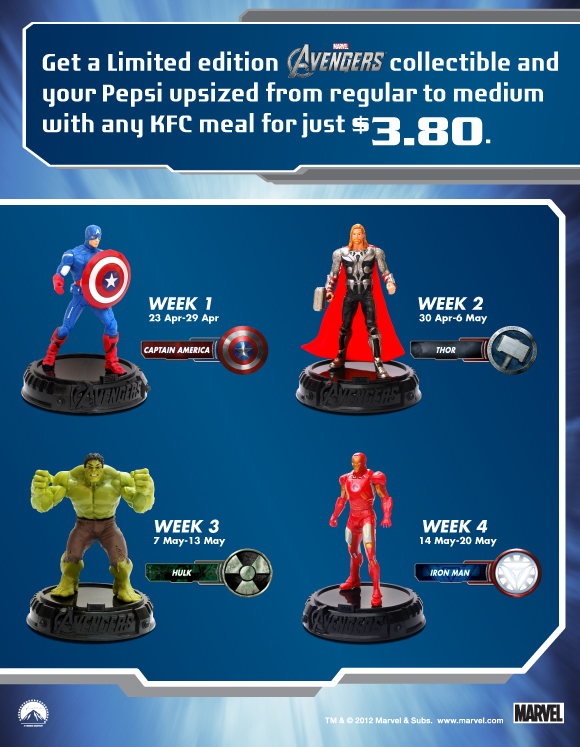 You want to get all the toys in the collection.. but you only get a free toy with every Happy Meal. In other words, if you or your kids want the full collection, you’ve got to buy as many Happy Meals as there are toys, and inevitably, you’re going to end up spending and eating much more than you wanted just for a few toys. Was that really worth the trouble? 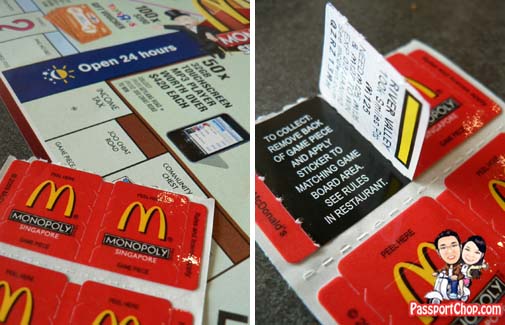 It’s not just the kids who are vulnerable either. If you’ve ever found yourself missing just one piece of a Monopoly Board that would win you a huge sum of money or a Hawaiian cruise if completed, you should know what we’re talking about. That game was addictive but generally impossible for people with normal appetites to complete. No prizes for guessing the first restaurant that came to mind whenever you glanced at the little torn Monopoly coupons on your table.

6. Colours of the Colonel and the Golden Arches to whet your appetite 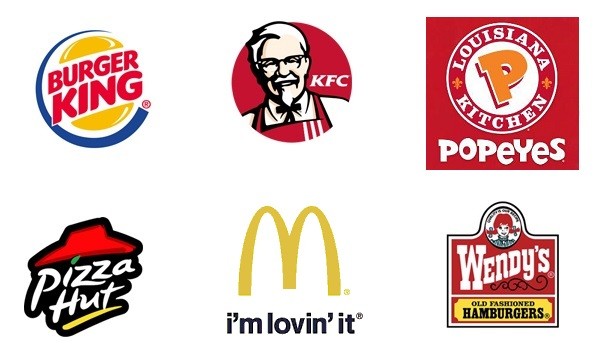 Red and yellow are colors that subconsciously encourage you to enter the fast-food joint and eat. Red triggers appetite and hunger. Red also naturally attracts attention. Yellow triggers the feelings of happiness and friendliness. No wonder you see at least one of these colors in every fast food restaurant.

Yellow is also the most visible color in daylight. The Golden Arches are visible from far, far away, and that’s the reason why. 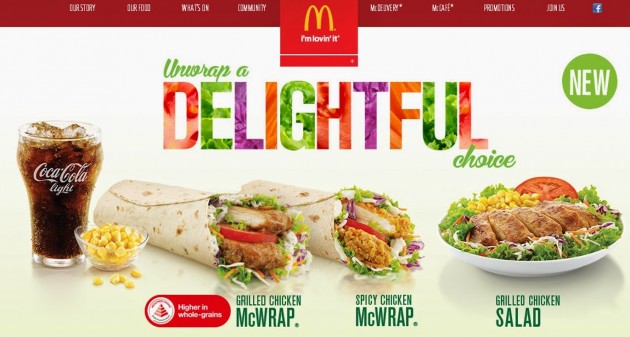 Under pressure from various health organisations like the Health Promotion Board, some fast food chains have begun featuring more healthy items like wraps and salads on their regular menus. While we agree that it’s a step in the right direction, the implementation leaves much to be desired.

Our conclusion: Either you buy their “healthier” options at a higher price, or you buy the usual fast food. They’re happy either way.

8. Ingredients that are just plain addictive 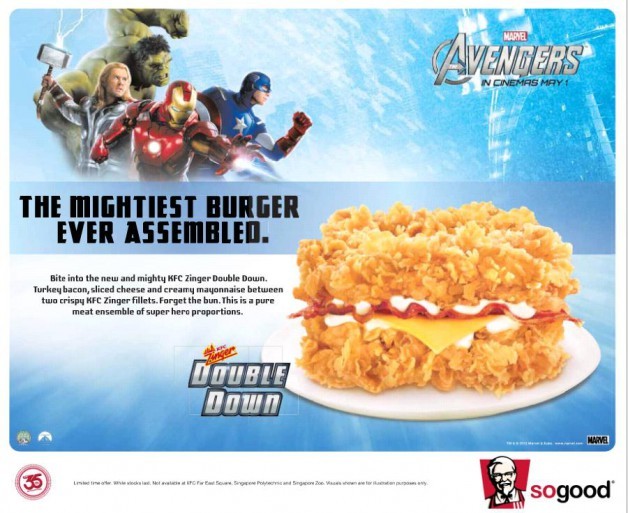 Refined carbohydrates, fat, sugar, and salt. These are ingredients in your fast food meal that will make anything taste better, and they’re so good at doing that job that they’re easily addictive – almost like drugs. A study showed that mice who had been fed these ingredients displayed withdrawal symptoms after they were put back on a more healthy diet. They also experienced cravings similar to those experienced by drug addicts. That’s downright unnerving. 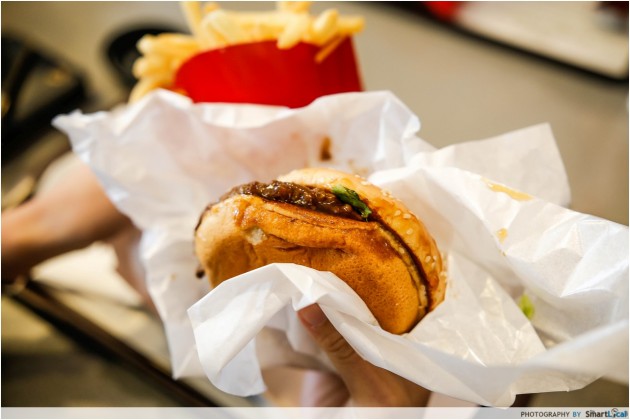 Artificial ingredients are commonplace too. Chicken McNuggets worldwide contain a chemical called autolysed yeast extract, a chemical similar to MSG that artificially enhances the taste of your food. A study on McDonald’s in Britain found 78 different additives in its products. The beef may be 100 percent beef, but the sauces, buns, and cheese aren’t what they claim to be – at least, not 100%.

Next time you plan on eating fast food, consider popping by the grocer or supermarket after your meal and grabbing an apple – it helps to detoxify your body from the addictive stuff.

9. You get to feast your eyes on beautiful burgers – beautifully Photoshopped burgers, that is 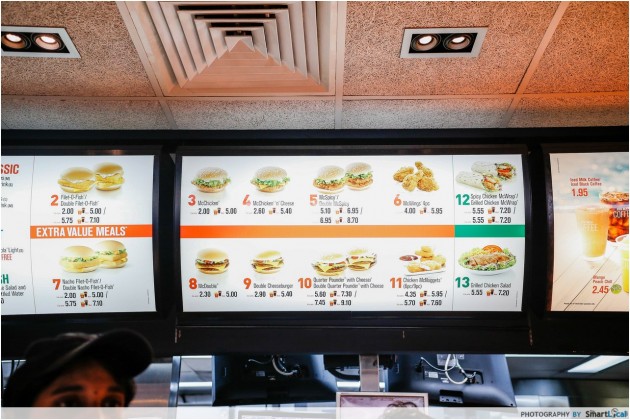 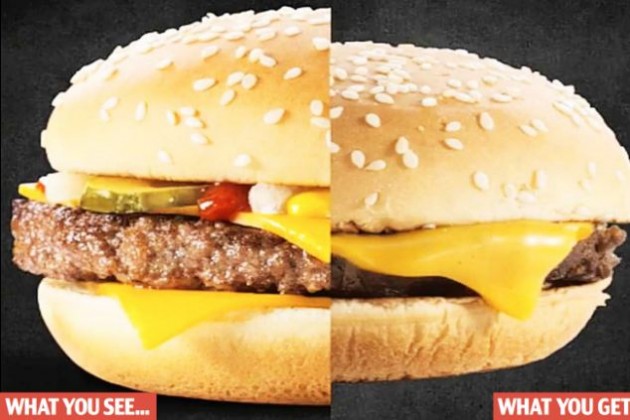 If you’ve ever wondered why the burger in your box doesn’t look quite the same as the one on the bright menu above the counter, well, you’re not alone. In response to a customer question asking exactly that, McDonald’s Canada gave viewers a behind-the-scenes look at how their food photos are taken – and the video might clear up some of your doubts. 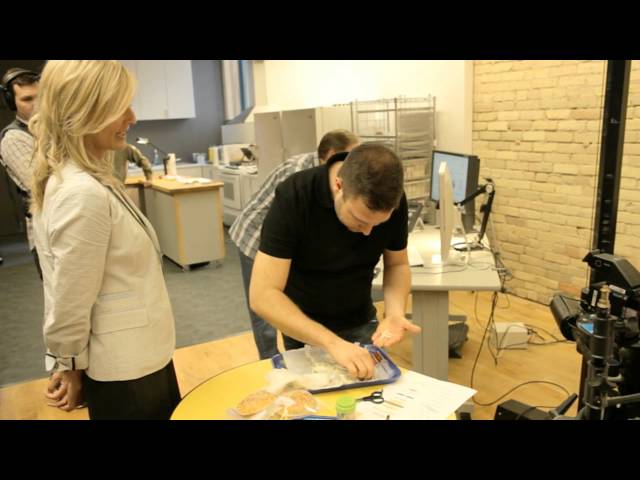 Go Behind the Scenes at a McDonald's Photo Shoot | McDonald's

Your burger’s made in one minute, but the photos on the menu take a few hours just to set up, and a lot more hours of editing, color-correcting and airbrushing. By the time you realise that your burger doesn’t look like the real McCoy, (in Singapore, we might call it the real Tan) a hungry person and their money have already been easily parted.

10. Getting you out quickly so more customers can come in 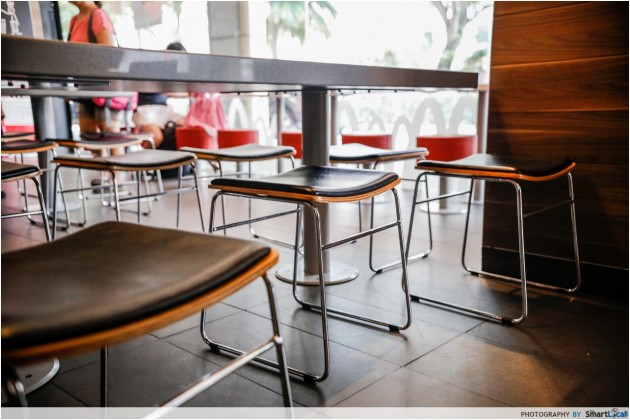 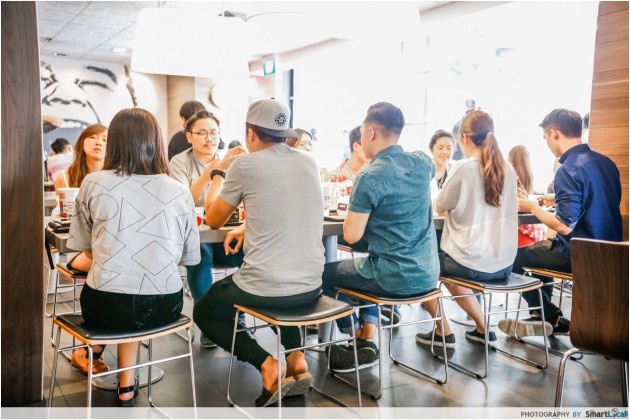 Some fast food restaurants blast fast music at loud volumes to get you out of their joint quicker. While we didn’t notice this so much while we were at this McDonald’s, we did notice
very bright lights and seats that wouldn’t have felt very comfortable for your bum over a long period of time. The underlying message is simple – go in, eat, and get out.

How do you fight back?

1. Be clear about what you want to order and stick to it

The next time you decide that you’re going to have fast food for a meal, be clear before you go in about what you’re going to order. It’s best if you jot it down on your phone so you don’t get distracted by the bright lights and glistening fried chicken. If you’re really not hungry enough to finish an upsize or add-ons, DON’T order them. Going in without a plan is agreeing to follow theirs – which is to get you to buy as many add-ons, upsizes, and toys as possible.

Be aware that nothing is as good as it looks. Be aware that what you’re eating is definitely not 100% natural, and that there are things added to your food that you don’t know about. Be aware that if you really want to eat healthy, you shouldn’t be at a fast food restaurant in the first place, because their healthy options aren’t quite healthy enough. Granted, these healthy options are certainly better for your body than the regular menu, but then, what isn’t?

3. Don’t go in on a completely empty stomach

If you do, you’ll simply end up ordering the biggest Double McThing you can see, with the largest fries and the tallest drink. You’ll also feel terribly bloated when you’re done with all that. Get a light meal, or a snack, before going in. You won’t over-order, and you won’t feel as guilty about your meal either.

The Art Of Psychological Warfare

That’s all there is to it. Remember – it’s your hard-earned money, and what you do with it is your prerogative. We see many public education messages reminding us not to be scammed by dubious overseas emails or mysterious phone numbers, but we often overlook the fact that we’re being subconsciously encouraged to spend more than we originally wanted around every other corner.

Bear these steps in mind before heading down to the nearest fast food outlet – your wallet and stomach will thank you for the trouble.

Disclaimer: We love an occasional meal of McDonald’s and crispy fried chicken as much as the next Singaporean. However, if you’re going to be giving them your hard-earned money, we think you should be aware of the things they do behind the scenes to squeeze as much cash from you as possible.

5 Things You Probably Didn’t Know You Could Do with Your Plus! Card
11 Lesser-Known Malaysian Dive Spots That You Need To Explore