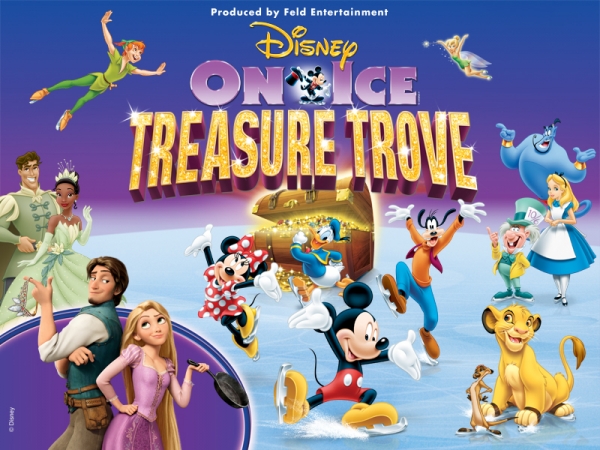 Disney On Ice: Treasure Trove was first published at TheSmartLocal.com

The latest Disney On Ice production, Treasure Trove will invoke feelings of nostalgia as it skates into Singapore from the 19th of March 2014 to the 23rd of March 2014. Be prepared to embark on an action-packed adventure with not 1, not 2 but 50 of Disney’s lovable characters!

You’ll get to sing-along to a medley of hit Disney songs that will transport you to yesteryears. It doesn’t matter if you’re young or old, anyone can enjoy the spectacle of this magical show.

What makes this different from past Disney On Ice productions such as Princesses & Heroes, Let’s Celebrate and Worlds of Fantasy is that it includes a whole lot more Disney characters ranging from the very first full-length animated film “Snow White and the Seven Dwarves” all the way till Disney’s 50th film “Tangled”.

Discover endless riches when Disney On Ice presents Treasure Trove comes to your hometown! Disney On Ice sets the gold standard with its newest skating spectacular. Get tangled up in Disney’s 50th animated feature with Rapunzel and Flynn and enter the worlds of your other Disney princesses – Tiana, Cinderella, Jasmine, Ariel, Sleeping Beauty, Belle, Mulan and of course, the one who started it all, Snow White.

Ahoy, Mateys! Set sail with Peter Pan, the always sassy Tinker Bell and the cantankerous Captain Hook & his pirate pals on an adventure beyond Neverland! Trek the wilds of Africa with Simba, Nala, Pumbaa and Timon as they discover the true meaning of the ‘Circle of Life’. Tick-Tock! Tick-Tock! Don’t be late to a very important date with Alice & the Madhatter as they march with the Queen of Hearts’ Army of Cards. Be sure to see this show full of memories guaranteed to last a lifetime.

Tickets for Disney On Ice presents Treasure Trove can be purchased online at sportshub, via the tickets hotline +65 6333 5000, by visiting the Sports Hub Tickets Box Office, or any Sports Hub ticket outlet at all SingPost locations.

0
SHARES
ShareTweet
Why implementing minimum wage in Singapore is a terrible idea
Musicity Singapore 2014 Grooves Into Tiong Bahru from 25 April to 10 May!