The Mona Lisa made him a household name as a painter, mentioned in the same breath as  Picasso and Dali. But many people often forget that Leonardo Da Vinci was a man of many talents, being an engineer, sculptor, scientist, and botanist as well. His curious mind from a young age pushed him to constantly experiment, enabling him to be a genius painter and scientist, applying different techniques and constantly improving his artwork.

This is also why to date, Da Vinci only has 12 to 15 finished art pieces. The Da Vinci: Shaping the Future exhibit reacquaints us with the past works of Leonardo, giving us a glimpse into the life and achievements of a genius gone. 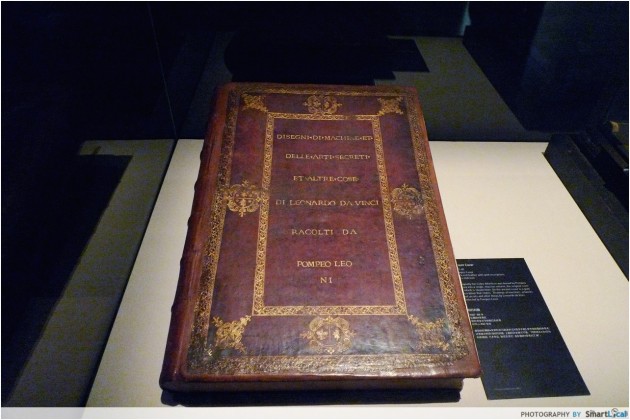 Walking into the exhibit, you will be greeted by a short animation that briefly introduces what fields of work Leonardo was involved in, a timeline summing up his life, and major events. There are five galleries divided into the nature of his work, from mathematics and natural science, to architecture, technology, and music.

Along with Da Vinci’s work are 5 contemporary art installations by local and international artistes, who draw inspiration from his ideas and work. I was particularly fascinated by Catching the Light, which made use of images and sounds from space to create a time-lapse of the night sky, in new patterns.

“Let no one who is not a Mathematician read the elements of my work. – Leonardo Da Vinci” Seeing this quote as we walked into the room, I was prepared for something that my brain would be unable to process, a string of numbers on a chalkboard or an unsolvable equation. Imagine my relief when I spotted interactive corners, where Leonardo’s knots and patterns sketches were drawn on paper.

Whichever way we turned the squares, the knots somehow still matched. There were also tablets with different games for each room. An enlarged page from the Codex Atlanticus (a huge notebook containing Leonardo Da Vinci’s sketches and notes) showed some of his workings considering the area of circles. 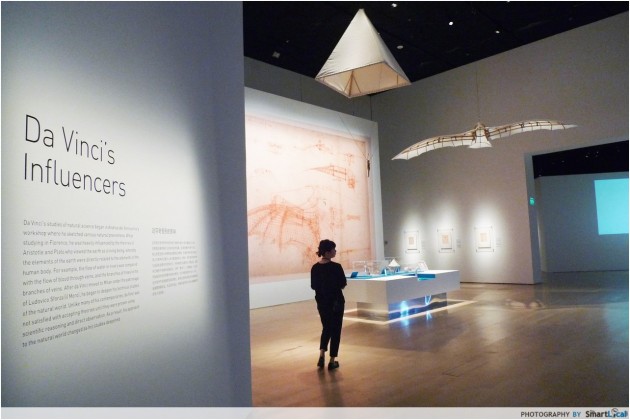 This was my favourite room. The parachute and wings looked so whimsical and improbable, especially in comparison with what we know about aeroplanes and flying technology today. Surprise! The guide told us that in 2000, a daredevil literally took the plunge and attempted a 3000 foot drop using Leonardo’s parachute. The best part? Not only did he survive, but he even commented that the descent had been much smoother than that of a modern parachute.

Of course, there weren’t any landing mechanisms so he had to use a modern parachute at the end, but I take comfort knowing that mere linen and wood, constructed in the right way, can save my life. 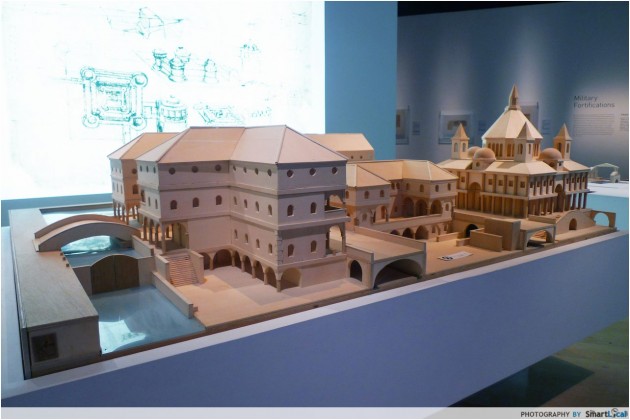 There was a self supporting bridge in this exhibit that we couldn’t help poking and prodding at, trying to figure out how it worked. It collapsed under the weight of our curiosity, and though we tried our best to attempt reconstructing it, we were as helpless as cavemen. There were also various pulleys, saws and pliers, that looked too complicated to use. In Da Vinci’s time, the various states of Italy were divided and always at war with each other, so Leonardo’s interests in mechanics and engineering served him well. The exhibit had models of some of the weapons he invented, including a giant crossbow that was designed to be so huge that it would be almost impossible to fire from, and was more for scaring enemies away – he was a pacifist at heart. 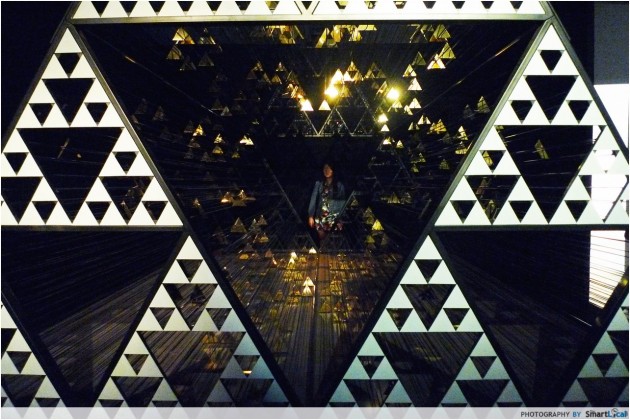 While interested in music, Leonardo eventually chose to pursue arts instead, as music was considered a Liberal Art at that time. He still made contributions to the music scene, including two automated drums that are on display at the museum – which we learnt were powered by horses and weights respectively. There were also interactive displays on the tablets that conveyed the reasons for the studies on acoustics Leonardo did – why there were echoes for certain surfaces but not others. 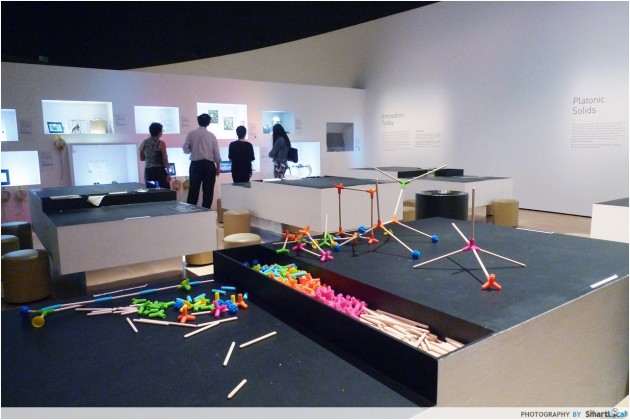 People who say kids don’t belong in a museum, eat your words. The exhibit is a great way to educate children about Leonardo and his works, and the interactive activities and mobile games will engage them too. This corner provides materials for you to build cities and parachutes, and there is even a platform for you to test out your mini parachute from. Works from some local universities are also displayed. 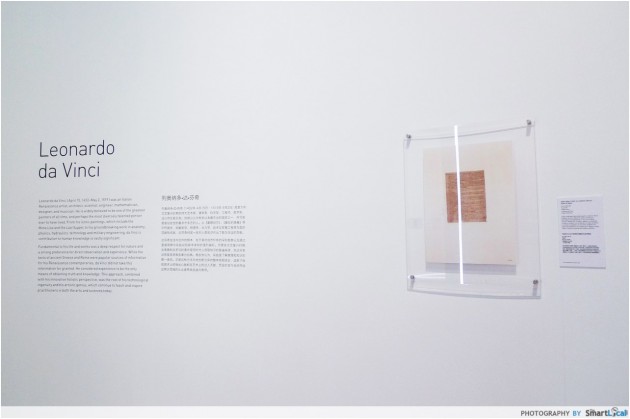 Prepare a sweater when you enter this gallery. The temperature here is kept at 16 degrees in order to better preserve the pages of the Codex, which are displayed suspended in glass. Even if you can’t really read Leonardo’s notes (on account of his mirror writing), it just adds to the aura of mystery and awe around the notes.

The fact that you are witnessing an actual bit of history that has been preserved so carefully throughout the years – and by one as well-known as Leonardo Da Vinci, no less – will leave you examining each page closely.

Go down for yourselves

As Leonardo says “I trust nothing but my own experience”. For people who think museums are dusty, boring places, this exhibit has many hands-on activities to involve you, and even different games on the tablets. The guides are also well-versed in interesting tidbits of information – like the fact that Leonardo used to examine dead bodies to find out how the human system worked, or how he created war weapons using his pacifist principles in order to minimize injury.

This post was brought to you by the ArtScience Museum.